With the main indexes closing moderately higher yet again, the VIX managed a micro gain, settling +0.75% @ 13.41. With the FOMC announcement tomorrow at 2pm, there is a moderate opportunity for a sharp equity reversal, with VIX spiking into the 15/16s. 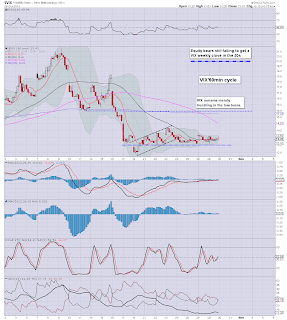 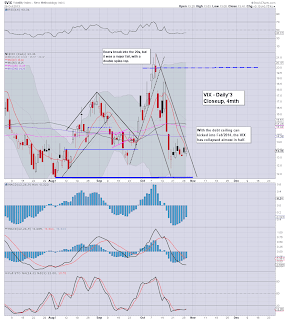 First...let me be absolutely clear.

ALL equity cycles are outright bullish, not least the bigger weekly/monthly charts, which are offering another 15/20% by late spring 2014.

However..we are clearly over-stretched in the near term, and there is a fairly significant risk of an equity reversal tomorrow once the FOMC announcement has been made at 2pm.

VIX could easily spike into the mid teens, but anything over 16 looks very unlikely, even if the market can muster a fall of more than 1.5%.
--

more later....on the indexes
Posted by Trading Sunset at 22:00:00
Email ThisBlogThis!Share to TwitterShare to FacebookShare to Pinterest

The main indexes all closed with moderate gains, sp +9pts @ 1771. The two leaders - Trans/R2K, were higher by 0.4% and 0.2% respectively. Near term trend remains outright bullish, and the sp'1800s are even viable tomorrow on an FOMC hyper-spike. 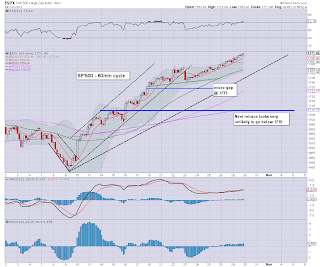 *It remains bizarre how clown finance TV has almost entirely glossed over the fact that the Nasdaq effectively flat lined/died for an hour today.
-

...after all.. why wouldn't we close at the high of the day?

This remains a market starkly bullish, especially when you consider the world equity market as a whole. Incredible underlying upside strength. As I noted some weeks ago..there is upside of around 20-30% on ALL world indexes by late spring 2014..and some indexes look set to double up within 12-18mths.

Anyone touting anything bearish this evening are idiots...lost in denial.
--

the usual bits and pieces across the evening
Posted by Trading Sunset at 20:03:00
Email ThisBlogThis!Share to TwitterShare to FacebookShare to Pinterest

The main indexes are generally holding moderate gains, with the sp' trying to hold onto the 1770s. Even the laggy Dow is making a play for the important 15700s, with some further weeks of upside very viable. Metals and Oil both moderately lower, with VIX holding micro gains of around 1% 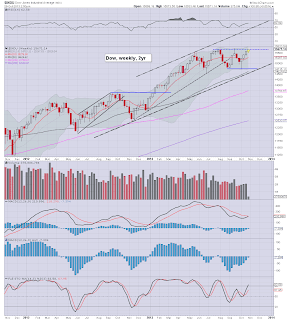 We having fun yet?

The sp'1770s..and  likely broad upside into late spring 2014. Does this look like a good shorting opportunity?
--


UAL breaking out..(not sure why). 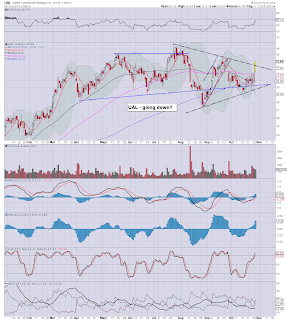 Lower oil prices..certainly going to help.
Posted by Trading Sunset at 18:51:00
Email ThisBlogThis!Share to TwitterShare to FacebookShare to Pinterest

A look at the hourly sp'500 chart presents an incredible 5 days of consistent algo-bot melt to the upside. With the sp' breaking into the 1770s, the daily charts are now offering 1795..even 1800 on a hyper spike if Mr Market likes what the FOMC have to say tomorrow. 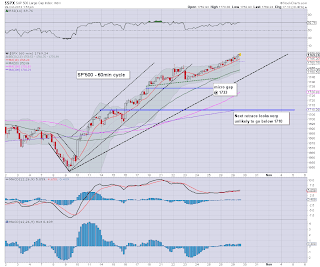 The Bernanke must be very pleased with himself. sp'1400 to 1770..and we've still 2 months left of the year!
-
Posted by Trading Sunset at 17:52:00
Email ThisBlogThis!Share to TwitterShare to FacebookShare to Pinterest

It would appear the NASDAQ has broken again. Quotes were frozen for some 45 minutes, now resumed, all indexes snapping to the upside. 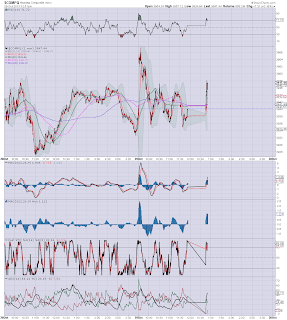 Stay sharp everyone...sp'1770s...but this market is beyond BUSTED....we're in uncharted territory.

Wouldn't surprise me if all the quotes flashed to zero...or infinity at ANY point.
-

All IS well indeed!
-

Looks like Nasdaq has settled a little lower, but hey..its working...kinda.

I see more top calling today....they sure never do quit!
Posted by Trading Sunset at 16:51:00
Email ThisBlogThis!Share to TwitterShare to FacebookShare to Pinterest

The equity indexes are somewhat mixed. Trans/R2K/Nasdaq, are flat..to a touch lower, whilst the Sp/Dow are holding moderate gains of around 0.25%. Metals and Oil are both weak. Market looks set to claw slightly higher into FOMC Wednesday, whilst there remains a near complete absence of sellers. 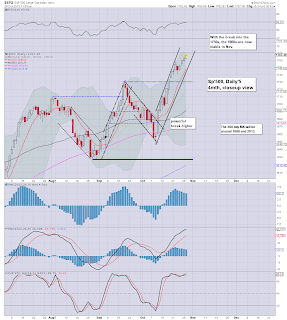 *AAPL is failing to attract any significant buying interest, now -$7, however bears are unable to kick it below the big $500 threshold. Broad  trend looks bullish into the 540/50s.
--

Daily charts will be offering the sp'1790s tomorrow.

Small chance of a reversal spike to 1785/95 tomorrow...with minor downside to a gap zone in the low 1730s. I still think its now entirely implausible to assume <1700 for the remainder of this year.
--
time for lunch.

Anyone wanna question the 2000s next year?
-

NASDAQ appears to have SEVERE quotes problems... my screen is going crazy with quote updates... 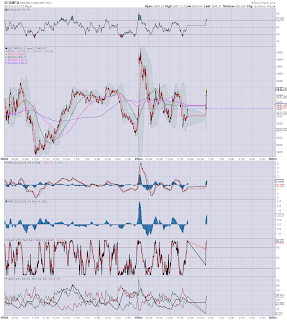 Whilst the main indexes continue to show broad underlying upside, the momo stocks are weak this morning, lead lower by Tesla (TSLA) which has made a conclusive break of support. With the move into the 150s, TSLA now looks set for 110/100 within the next few weeks. 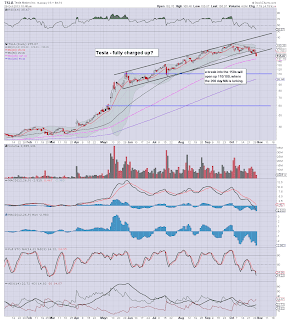 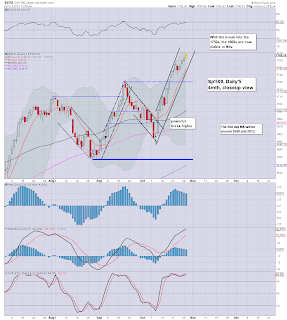 *As for TSLA, it could even do a back test of the old channel, as high as 170/75...but anyway..it ain't bullish. I'd be surprised if it doesn't just unravel straight down into next week, when earnings are released.
-

Main market will likely remain in algo-bot melt mode until Wednesday afternoon. There isn't much else to note on it.
Posted by Trading Sunset at 14:51:00
Email ThisBlogThis!Share to TwitterShare to FacebookShare to Pinterest

Good morning. A mere 30 mins into another day..and many indexes are already breaking new highs. Metals are a touch lower, whilst Oil is -0.5%. Equity bulls will likely struggle more today than Monday, with a lack of a QE, and increasing selling into historic price levels. 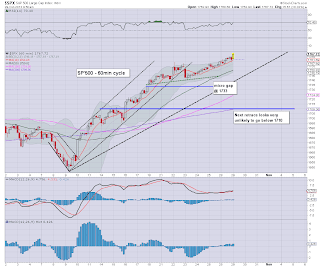 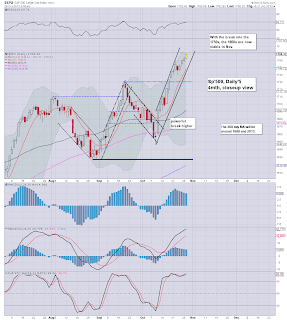 *interesting open in AAPL, which rather than open -$20 - as occurred in AH last evening, AAPL, actually opened $5 higher.
-

No doubt..more will be calling tops this morning. Idiots. But hey..at least they're consistent in being wrong....and their willful denial.
-

QE continues in full...as will be surely be confirmed by the FOMC tomorrow.  Weekly charts now offering the mid 1770s in the immediate term. 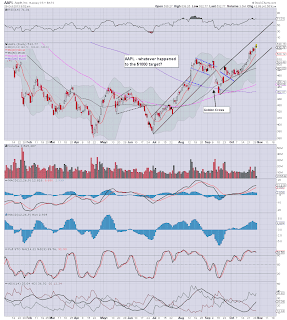 Price formation is an F' flag...bullish. Opening black candle is somewhat bearish, but that is still a strong reversal from yesterday evening lows. Target remains 540/50s
- 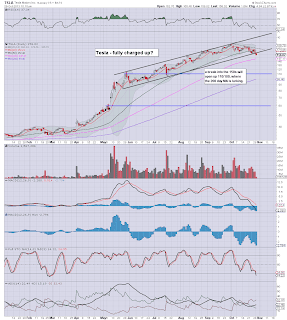 target is $110/100, within a few weeks.
Posted by Trading Sunset at 13:52:00
Email ThisBlogThis!Share to TwitterShare to FacebookShare to Pinterest

Whats wrong with the DAX?

The US equity market continues to push higher, with the sp' hitting a new high of 1764.99 today. Similarly, the 'old leader' - Transports, hit 7060. With continuing QE, and a near total absence of sell side volume, the market looks set to broadly climb into November, if not all the way into December. 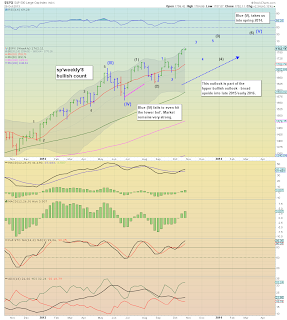 Perhaps most notable is that the weekly upper bollinger has now risen into the low 1770s. So...equity bulls have another 1-2% upside viable in the immediate term. Certainly, the 1790/1800s do not look viable until mid November.

No doubt, the weekly cycle will rollover 'sometime' soon. It might be as soon as this week (although I'd guess...no)...reasonable chance of maxing out in mid/late November, and a high chance of selling lower once we move into December.

If we're in the mid/upper sp'1800s by early December, there will be some very (and entirely understandable) high amounts of year end profit taking.


Whats wrong with the DAX? 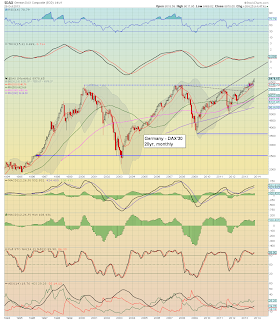 I see continued sporadic postings from a number of people out there highlighting various world indexes, not least of which is the German DAX.

As of the Monday close, with just 3 trading days left of October, the DAX is up 4.5% - a very significant gain on any basis. Like most other markets, the DAX has been battling higher since the intermediate lows of autumn 2011. In fact, in just TWO years..the DAX is up 80%! Were the Dow up the equivalent, we'd be looking at Dow 18000.

Yet, I see more (dare I suggest), doomer bear postings that the DAX is ready (along with other world indexes), for a major fall. Huh? Am I just in the twilight zone right now? I see an index up 80% in two years, with October gains of 4.5%, and that is BEARISH in the eyes of some out there?

Other world indexes look similarly strong. Even the EU PIIGS of Spain and Italy are still showing good gains for this month, with likely follow through into Nov/December.

Frankly..there is absolutely NOTHING 'wrong' with the DAX. It is outright bullish (it would be classified as MARCON'7), mid-term upside target is 9500/9750. 10k will be tough to break/hold above, and seems unlikely until late 2014/early 2015.

*I will do the usual 'World Monthly Indexes' update this coming weekend.
---

Some of the econ-data (notably retail sales) is still delayed due to the recent shutdown. However, there is Case-Shiller HPI, and consumer confidence. Frankly though, I don't think Mr Market particularly cares about either of those.

What matters is the continuation of QE. Indeed, for many, it remains a case of 'bad news is good news', in that the QE will more likely continue at the current rate into spring 2014.

*there is no sig' QE-pomo until at least Friday.
--

I realise many of the remaining bears out there are finding this latest equity ramp especially tough, not least since it comes after the proverbial can has again been kicked (if only for a few months) along the road. All those who were touting the imminent Zombie Apocalypse - via a debt ceiling breach, they sure are quiet right now. Yet..they'll return to tout their bearish hysteria in Jan/Feb'2014

I myself am certainly 'having issues' with this market. I continue to read all the regular sites, many of which are relentlessly calling for that elusive 'major correction'. Surely, it is now clear, that is off the table until next year, and probably no earlier than late spring? We're talking about another 4-6 months of waiting, certainly not days..or weeks.

My own personal primary objective remains to at least 'still be around', when this nonsense finally does peak. Right now, that still looks to be a good two years away. For many, I realise that is too long to wait.

It has also really started to sink in that if I'm right (about another two years for a multi-year equity peak), I'll increasingly be noted as the most bizarre 'Permabear' out there. Ohh, and yes, I did consider a change of name, but I'll stick with what I originally chose. 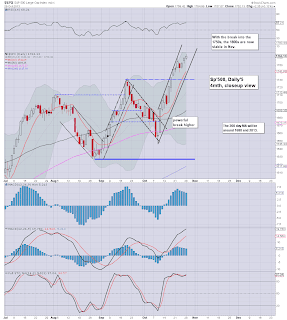 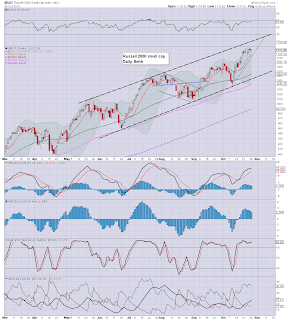 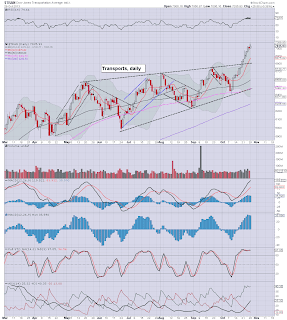 There really isn't much to add. The broader trend remains clearly to the upside. Yes, we're overbought, but not to the extent that a further 2% isn't viable this week.

Market is likely to trade Tuesday..much as it did today. The FOMC are not going to surprise the market, but still, with QE continuing, the market looks set for broadly higher levels into next spring.