US indexes continued to break new historic highs, but also displayed some significant weakness, with net weekly changes ranging from -0.55% (Dow) to +1.6% (Transports). There remains a viable H/S for the R2K/Nasdaq in the near term, with much lower levels this summer/early Autumn. 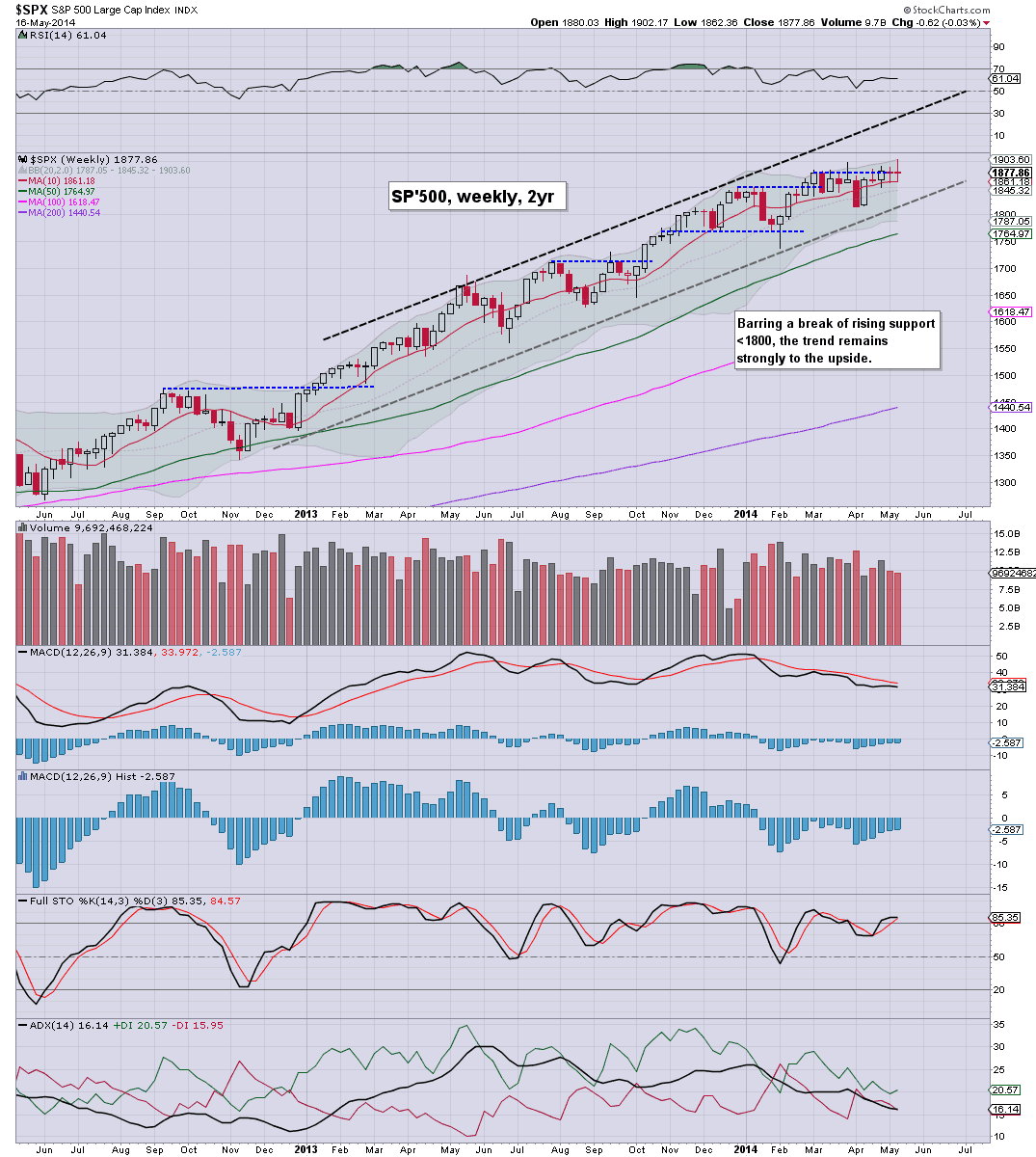 Despite the significant fall on Thursday, the sp'500 closed the week effectively flat. Again, it is notable that the bulls did achieve a new historic high of 1902, before seeing a decline to 1862. Importantly, the 10 MA held, and the weekly 'rainbow' candle managed to close green for the fifth consecutive week.

Underlying MACD (blue bar histogram) cycle ticked higher for the fifth week, but is still negative cycle. Equity bears need to take out the 1814 low..if not the 1800 threshold (where the monthly 10MA also lurks) before getting confident of much lower levels this summer. 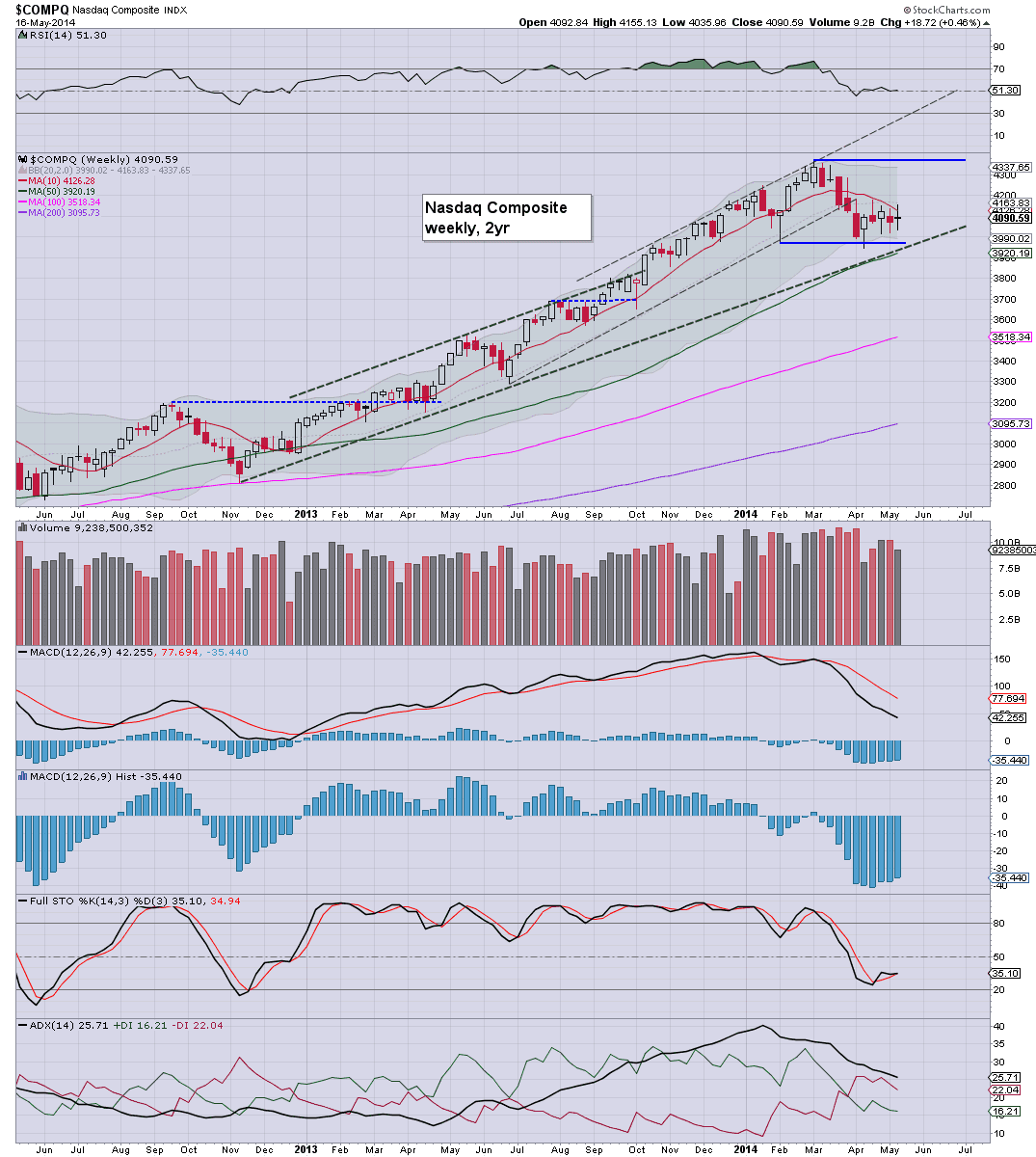 The tech' managed a net weekly gain of almost 0.5%, but it was the seventh consecutive weekly close under the 10MA. which is something we've not seen since late 2012. There is high probability of a minor bounce to the 4200/250 zone, which is 3-4% higher.

Much like the R2K, the Nasdaq is offering a very large H/S formation, which would offer a basic downside target of 3600/3500 this summer. 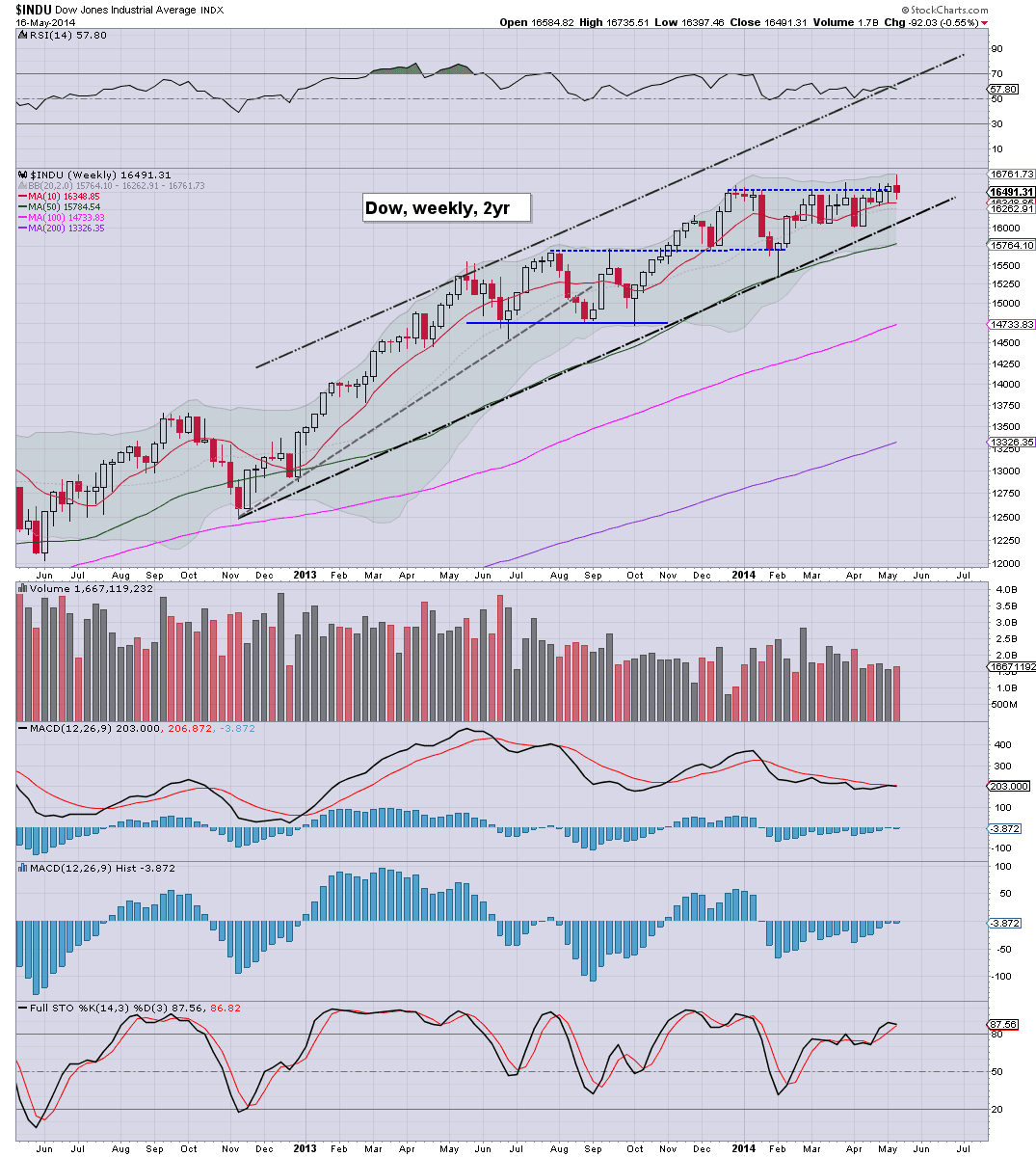 The mighty Dow broke a new high of 16735 this week, but certainly saw some weakness across Wed/Thursday, with a net weekly decline of around -0.5%. Underlying MACD cycle is still fractionally negative (although it was positive Mon/Tuesday). 2-3 weeks of moderate upside look viable, although the 17000s look very difficult. 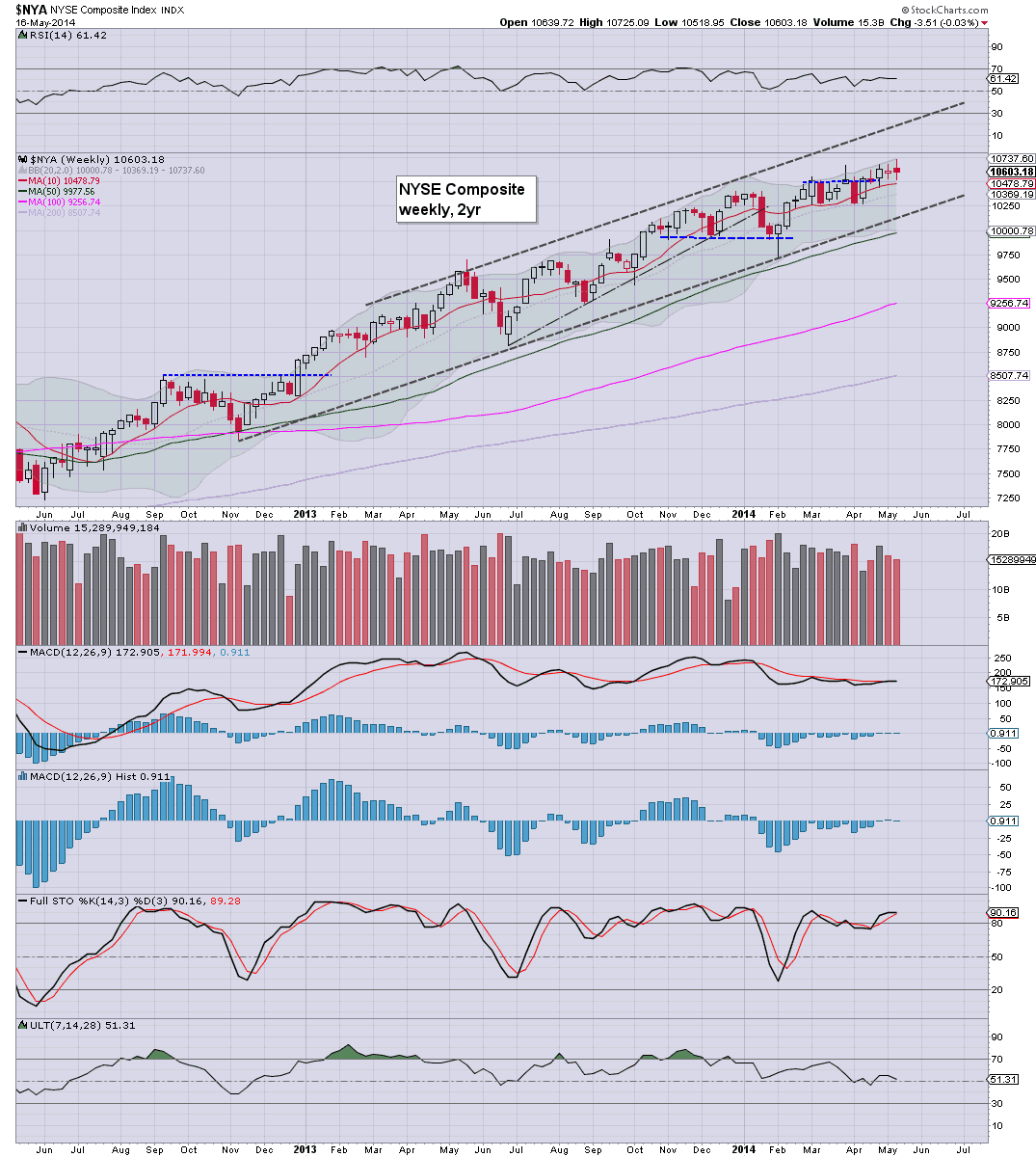 The master index broke a new historic high earlier this week, but closed much like the sp'500..effectively flat. The 11000s look overly difficult this side of the summer. Equity bears need to break under 10250 to offer clarity that the primary trend from Oct'2011 is over. 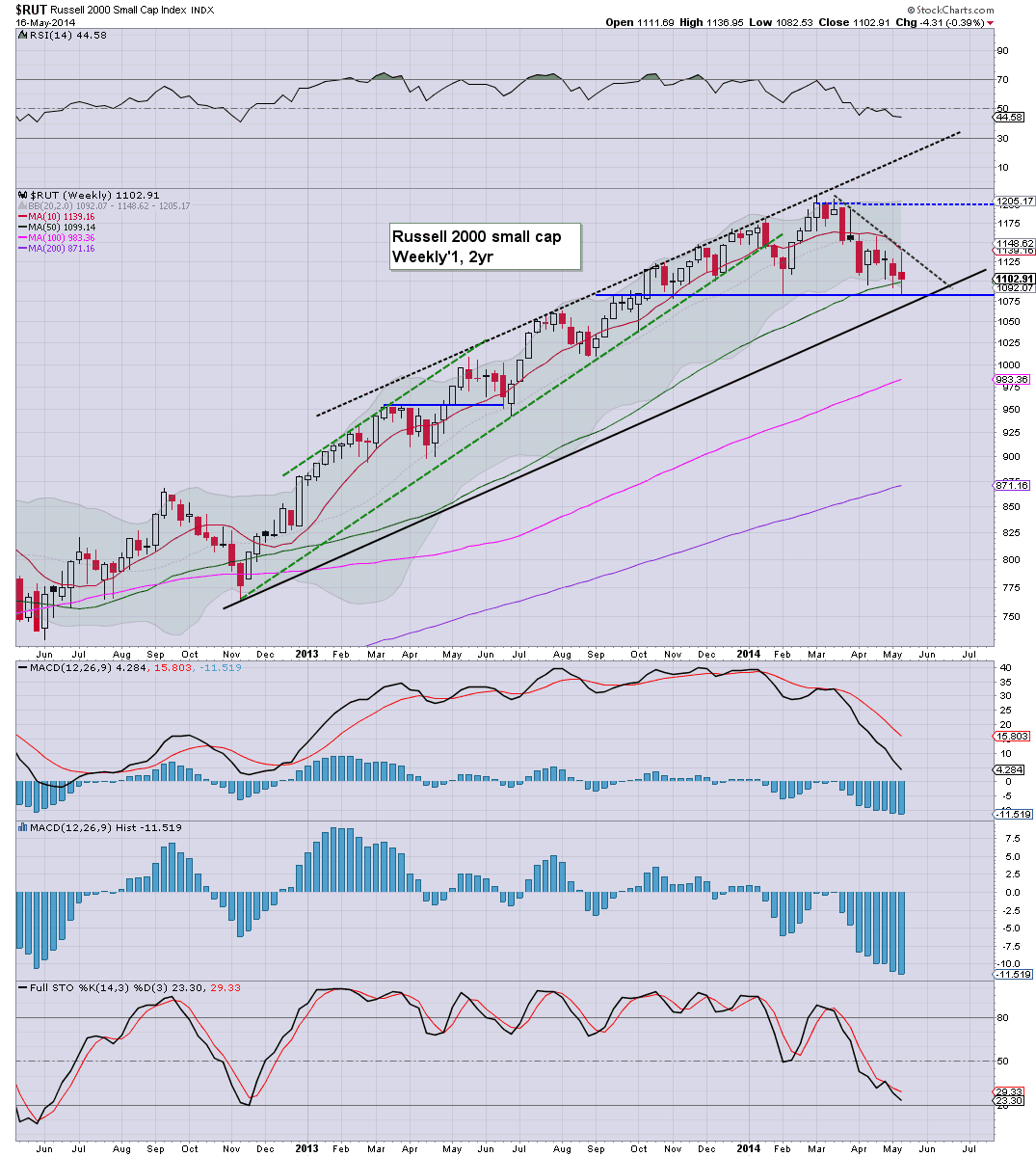 The R2K remains the weakest index, but did manage to hold the 1080s this week. This was the eighth weekly close below the 10MA, and is certainly the most bearish price action since late 2012. Underlying MACD cycle is deeply negative, whilst price structure is offering a very clear H/S formation for this summer. 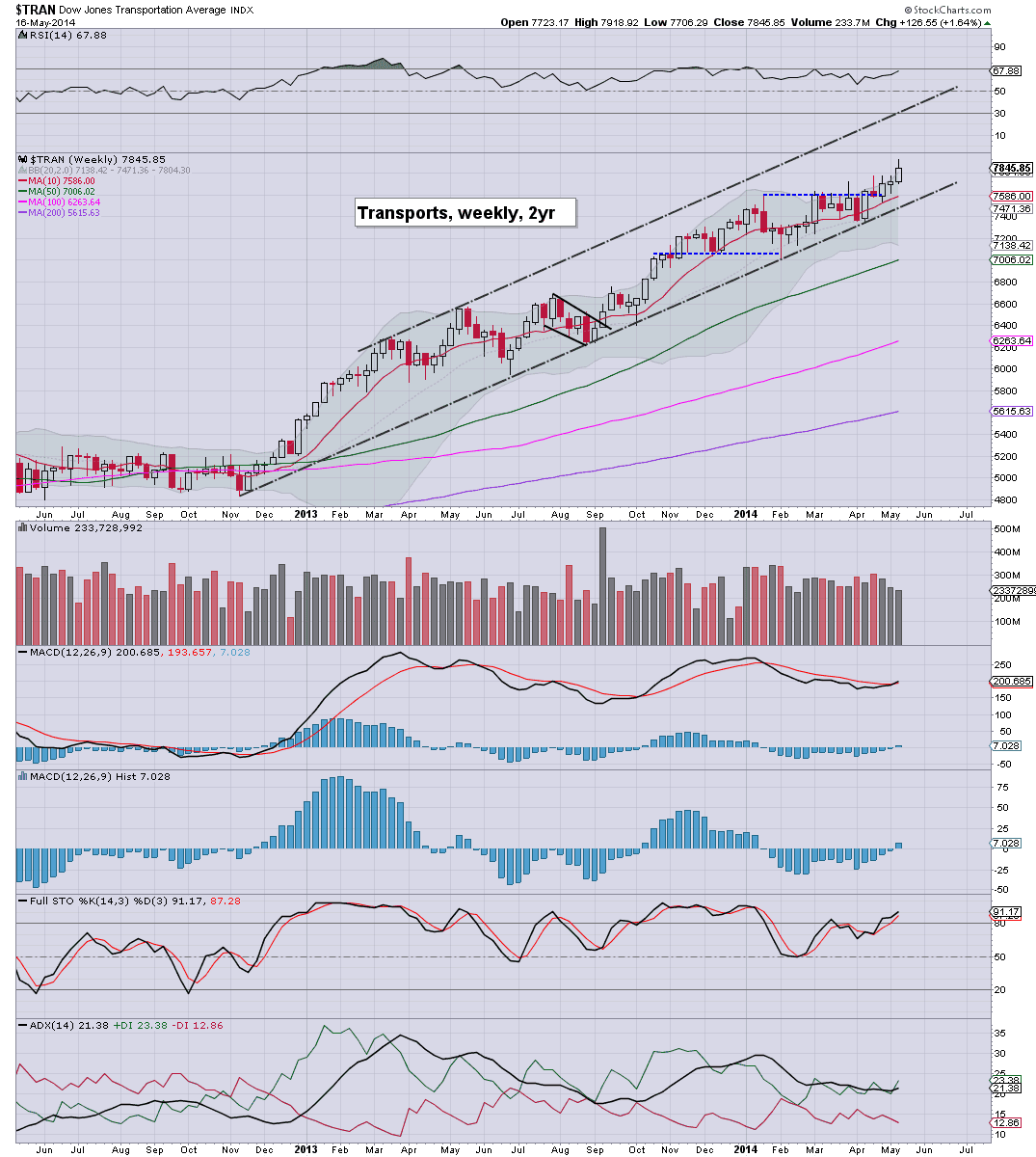 The Transports saw rather impressive net weekly gains of 1.6% this week, and if you do believe the notion of 'old leader..as the leader', then it does bode for another few weeks of upside in the broader market. Underlying MACD cycle is now positive for the first time since January, and it is suggestive of the low 8000s by early June.

So...it was a bit of a split week. New historic highs for the Dow/SP/Trans across Mon/Tuesday, but then some rather significant weakness across Wed/Thursday.

Taken as a collective, we continue to see a market where the more stable/conservative stocks are breaking new highs, whilst the hyper indexes - R2K/Nasdaq are still struggling. The fact the latter are potentially building large H/S formations is particularly interesting.

I would indeed still consider the weakness in the R2K/Nasdaq as the preliminary 'early warning of trouble' for summer/autumn 2014. 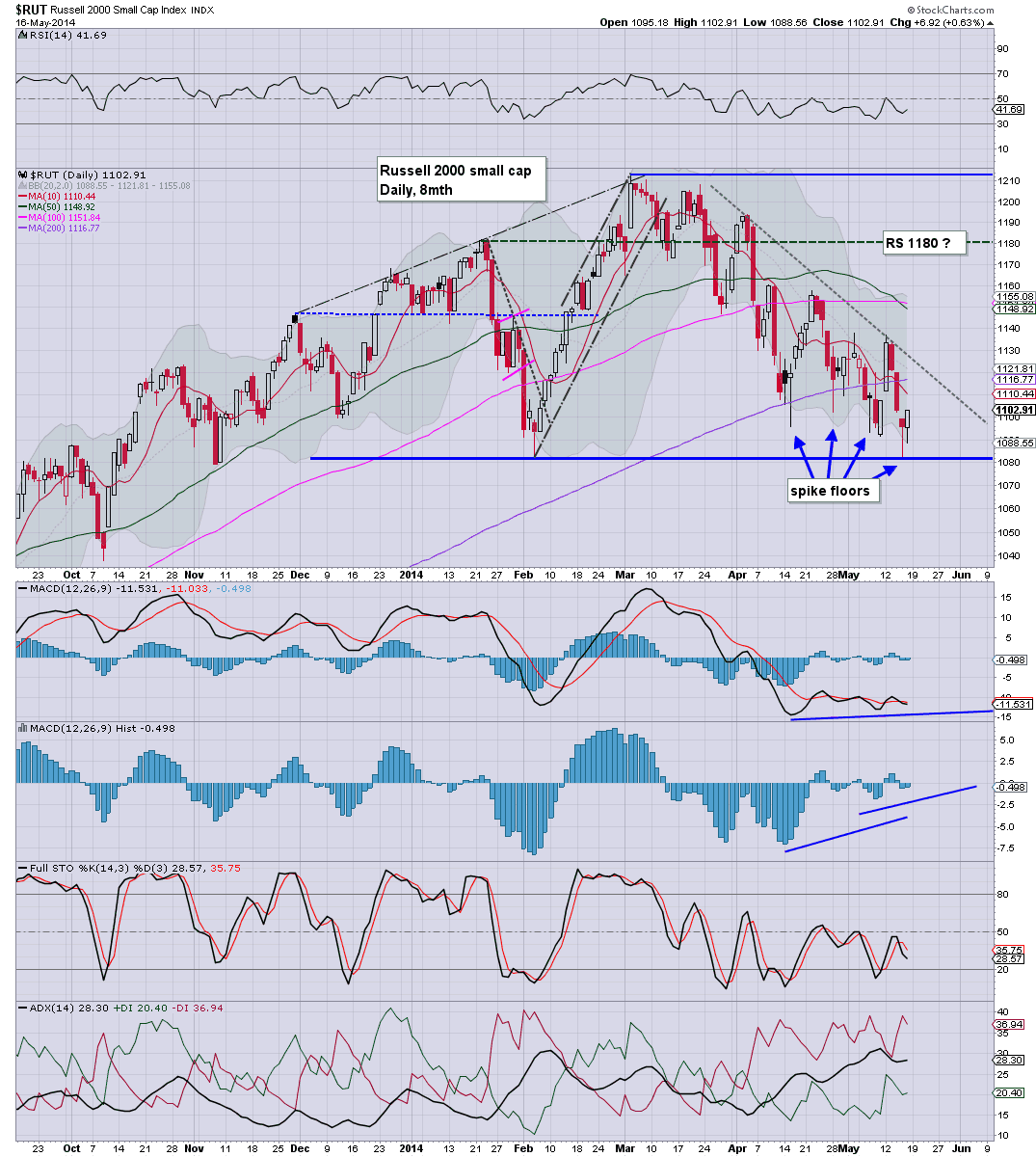 Perhaps you can understand, when I saw 4 arrows highlighting the recent spike floors, it did amuse me, and instill in me, the notion that the last few days were just another tease to the bears. 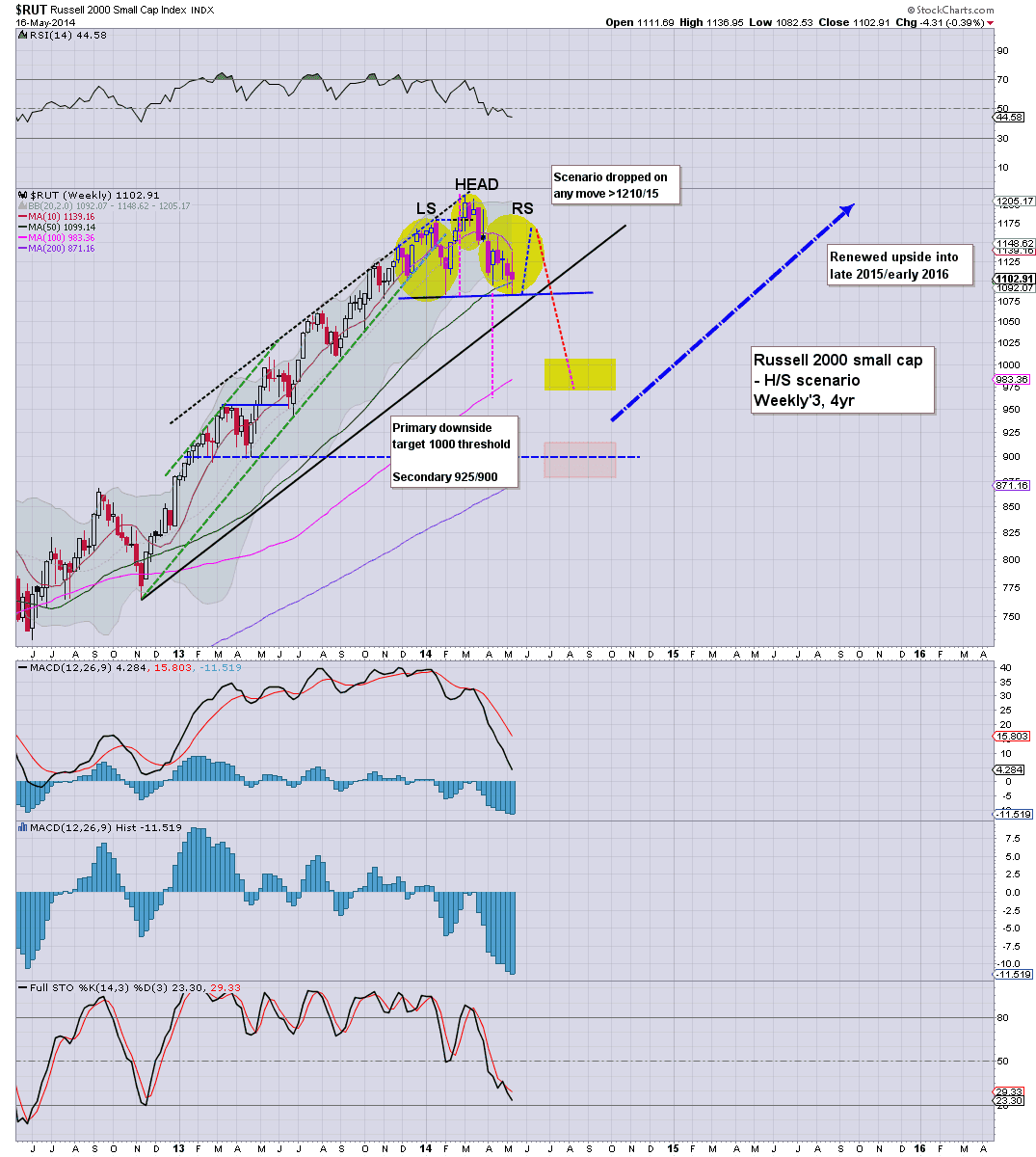 To be clear, this scenario will get dropped if the R2K goes much above 1190/1200, but that is around 8% higher, and I find it hard to believe we'll see another bounce of that size, this side of the summer.
-

It is set to be a pretty quiet week, at least in terms of 'planned/known' news.

Friday will see further housing data, but trading will likely be very quiet, being the lead in to a 3 day 'Memorial day' weekend

*there is sig' QE-pomo, Monday and Tuesday.
-

Upside into the 3 day weekend

Yes, we saw some distinct weakness across Wed/Thursday - with new lows on the R2K, but overall, the broader market is still holding together. Price action..and price structure is still in favour of the bulls next week - not least with another set of new historic highs for the Dow/SP/Trans. Whether we end up forming a larger H/S formation on the R2K/Nasdaq - which would have huge implications for the broader market, that is the big question for this summer.

back on Monday.... (probably)
Posted by Trading Sunset at 15:39:00
Email ThisBlogThis!Share to TwitterShare to FacebookShare to Pinterest
Newer Posts Older Posts Home
Subscribe to: Posts (Atom)