With equities remaining strong into the close, the VIX turned back lower, and settling -0.1% @ 13.09. Near term outlook is offering a minor spike into the 14s, before melting back lower. VIX now looks unlikely to break 20 for at least a month or two. 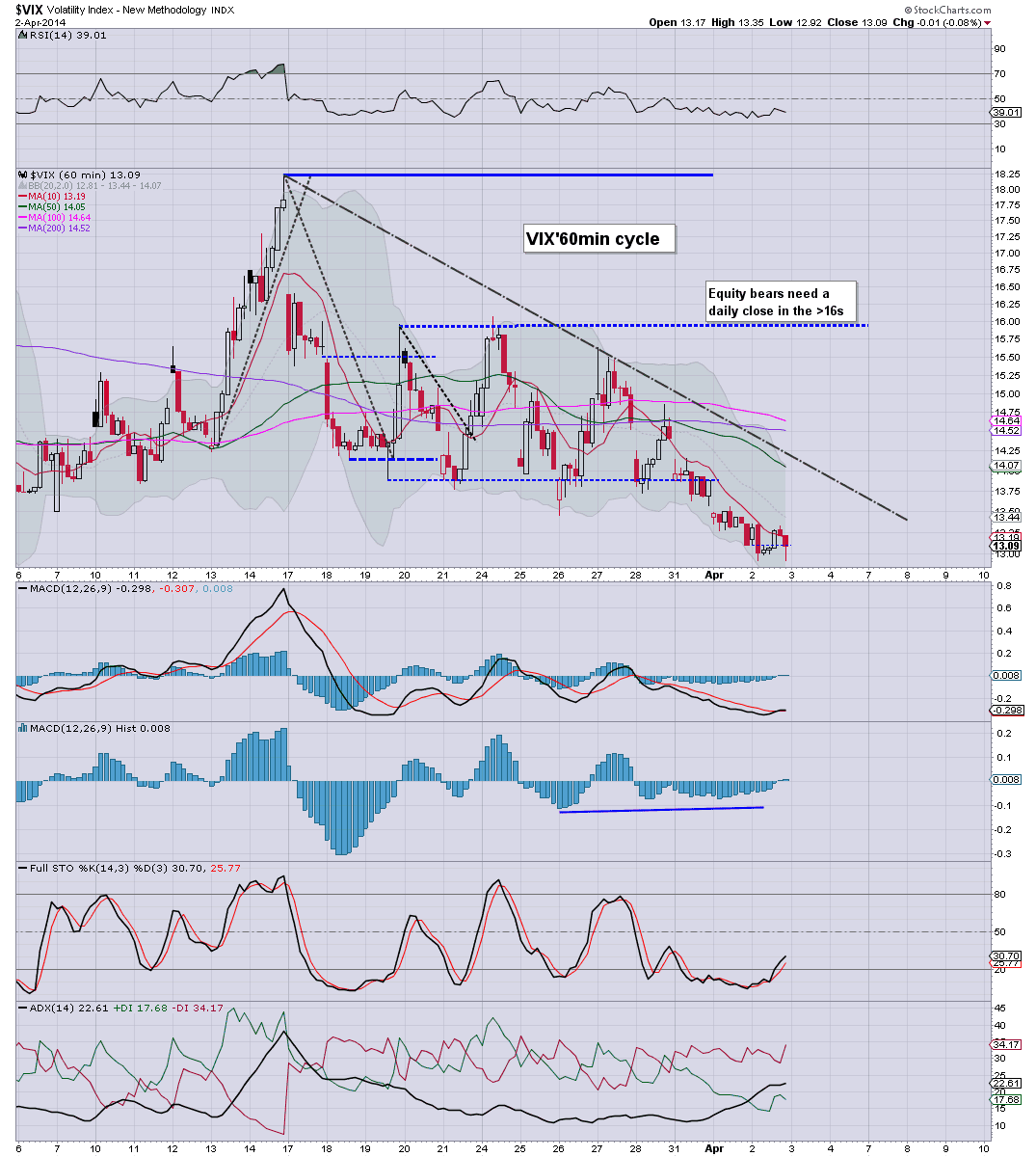 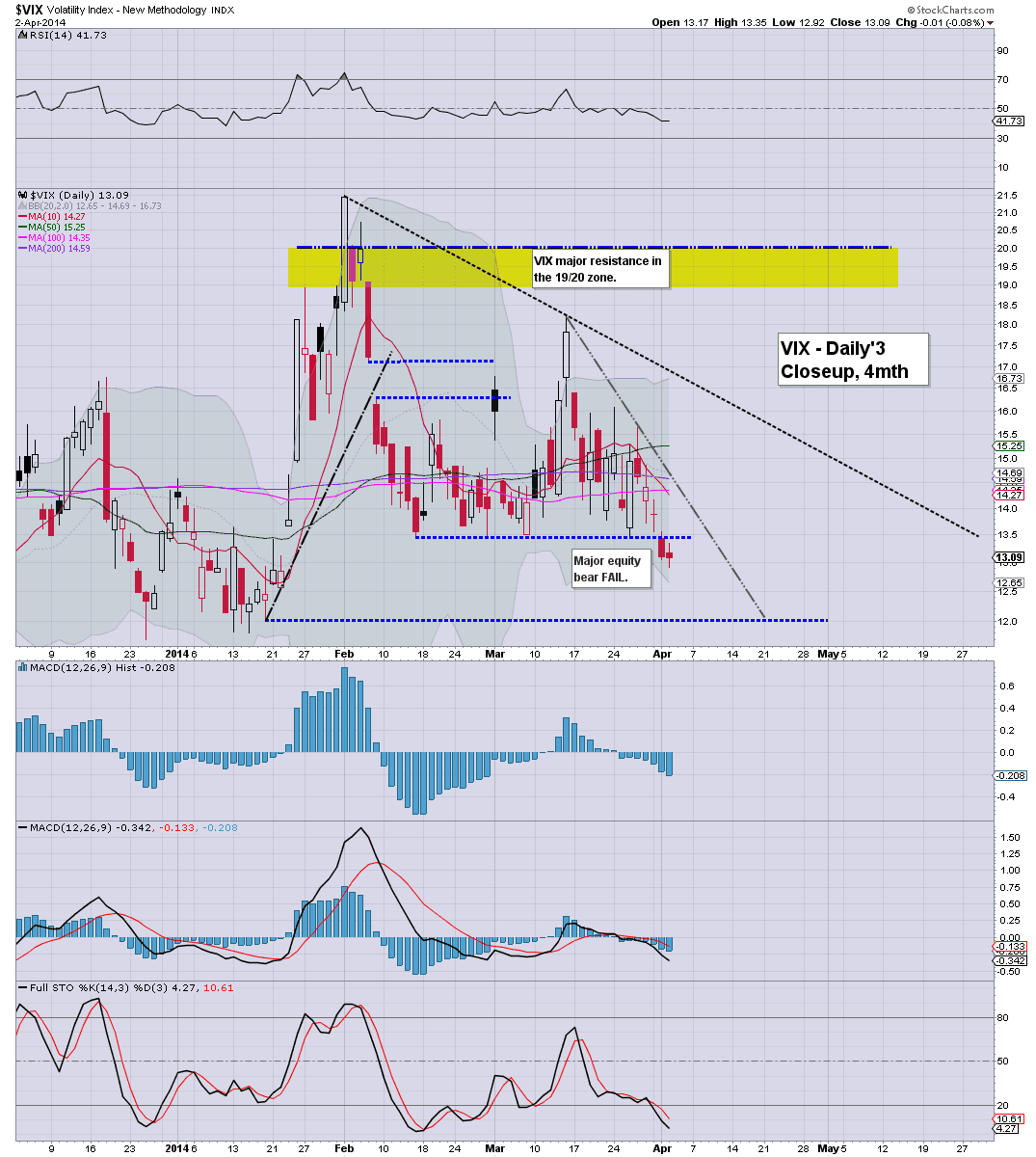 VIX remains low, and at best, equity bears might see a spike to the 14s..maybe 15s. Certainly, the 16s look out of range, in what is a market that is consistently breaking new index highs.
-

US indexes closed with some noticeable strength, sp +5pts @ 1890, having broken a new historic high of 1893.17. The two leaders - Trans/R2K, settled +0.7% and +0.3% respectively. Near term outlook is for a minor retrace, before pushing higher across much of April. 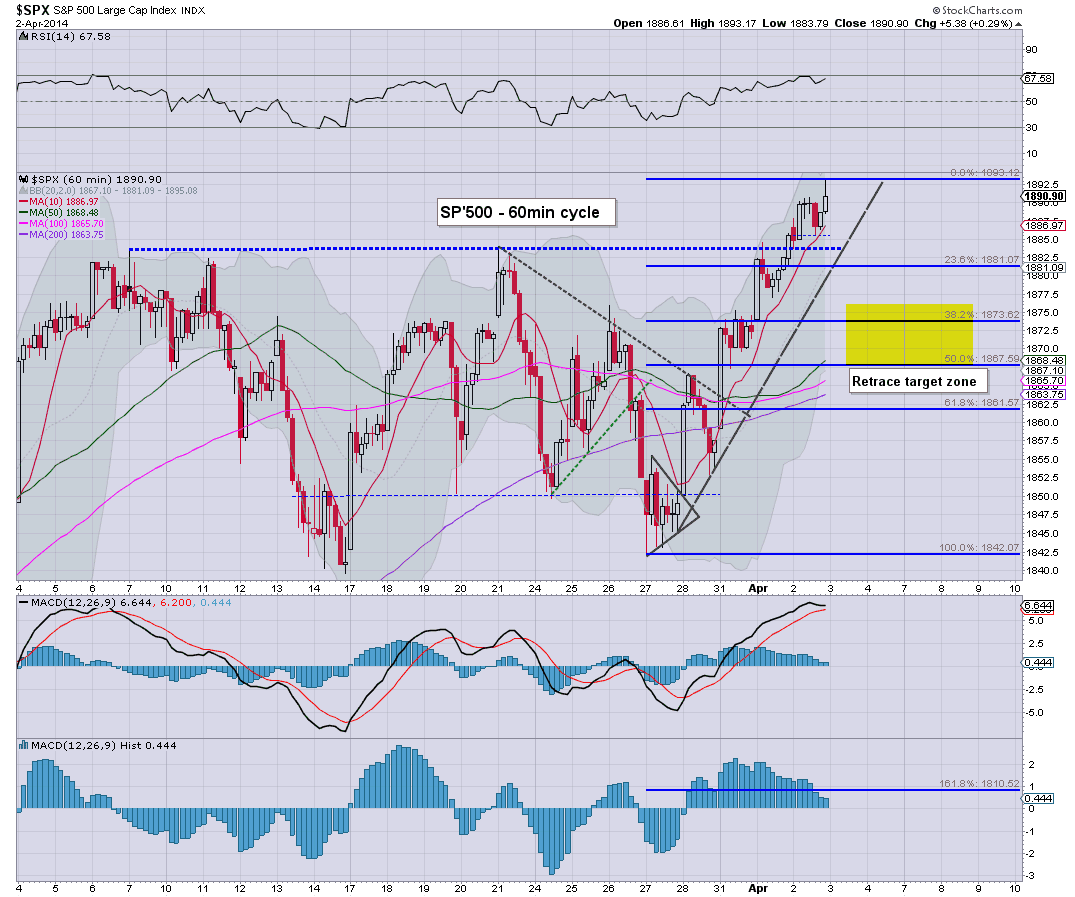 *a somewhat strong closing hour - despite a weak 1pm hour.
--

I remain on the sidelines, but am open to going long the indexes, but if the market keeps rising, finding an acceptable entry will be overly difficult, not least for a permabear!

At worse, I'll just sit the next month or so out. What I won't do is attempt to short this nonsense, not least with the weekly/monthly charts now offering the sp'1960/70s in May.
--

New historic highs for a number of equity indexes, but US markets are set to close on a moderately weak note - not that it negates the importance of the new highs. A retrace to the sp'1875/65 zone looks viable tomorrow/early Friday, which would likely equate to VIX 14s. 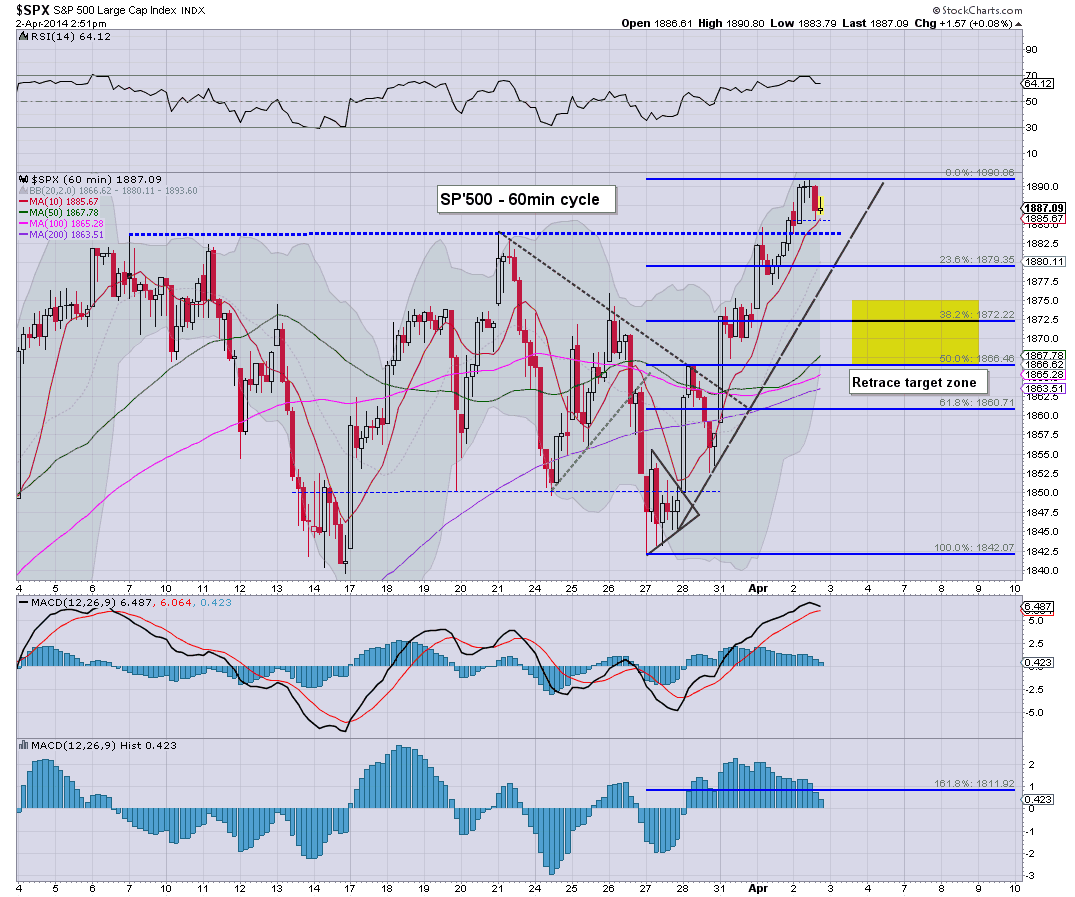 Even if all indexes close moderately red today, in no way can the bears start getting remotely excited.

The bears FAILED last week to break <1840/30, and indeed, we have broken new historic highs.

For me, the only issue is whether the market can retrace lower enough to entice me aboard the bull train. A disturbing thought...to be sure.
--

updates into the close..although I'm not expecting any dramatic downside, at best..perhaps 1880.

..and that is the problem the bears face. The breakout to new highs...could just keep going..and going.
--
I guess you could say...'won't short, might go long, but only if minor retrace'.


3.37pm...and new index highs..as the bears who were shorting earlier get kicked out.

VIX turns red..back in the 12s

3.56pm.. A day for the bulls...and most certainly..that was NOT a weak close!
Posted by Trading Sunset at 19:52:00
Email ThisBlogThis!Share to TwitterShare to FacebookShare to Pinterest

Having broken new historic highs for some of the indexes, it looks like we'll see some moderate weakness into the close..and early tomorrow. The hourly index cycles look set for a bearish MACD cross before the close. Retrace target is somewhere in the 1875/65 zone. 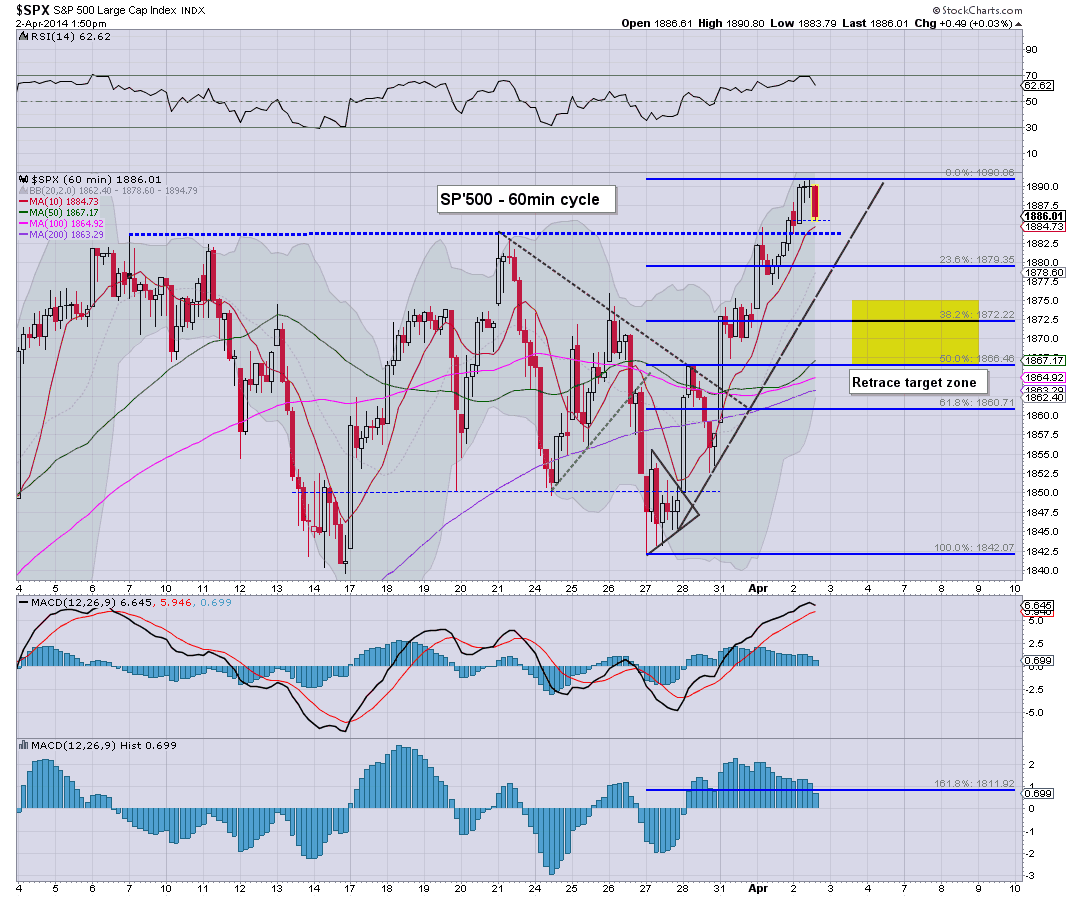 Okay..so..lets see how the remaining two hours pan out.

Right now, best case for the equity bears is a close around 1880. That will easily bring within range a brief minor washout tomorrow.

I suppose it could drag out until Friday, but really, the weekly charts are pushing higher each day, and we all know many are looking to jump onboard. Regardless of how tomorrow goes, I'd still look for a week close, somewhere in the 1885/95 zone.
- 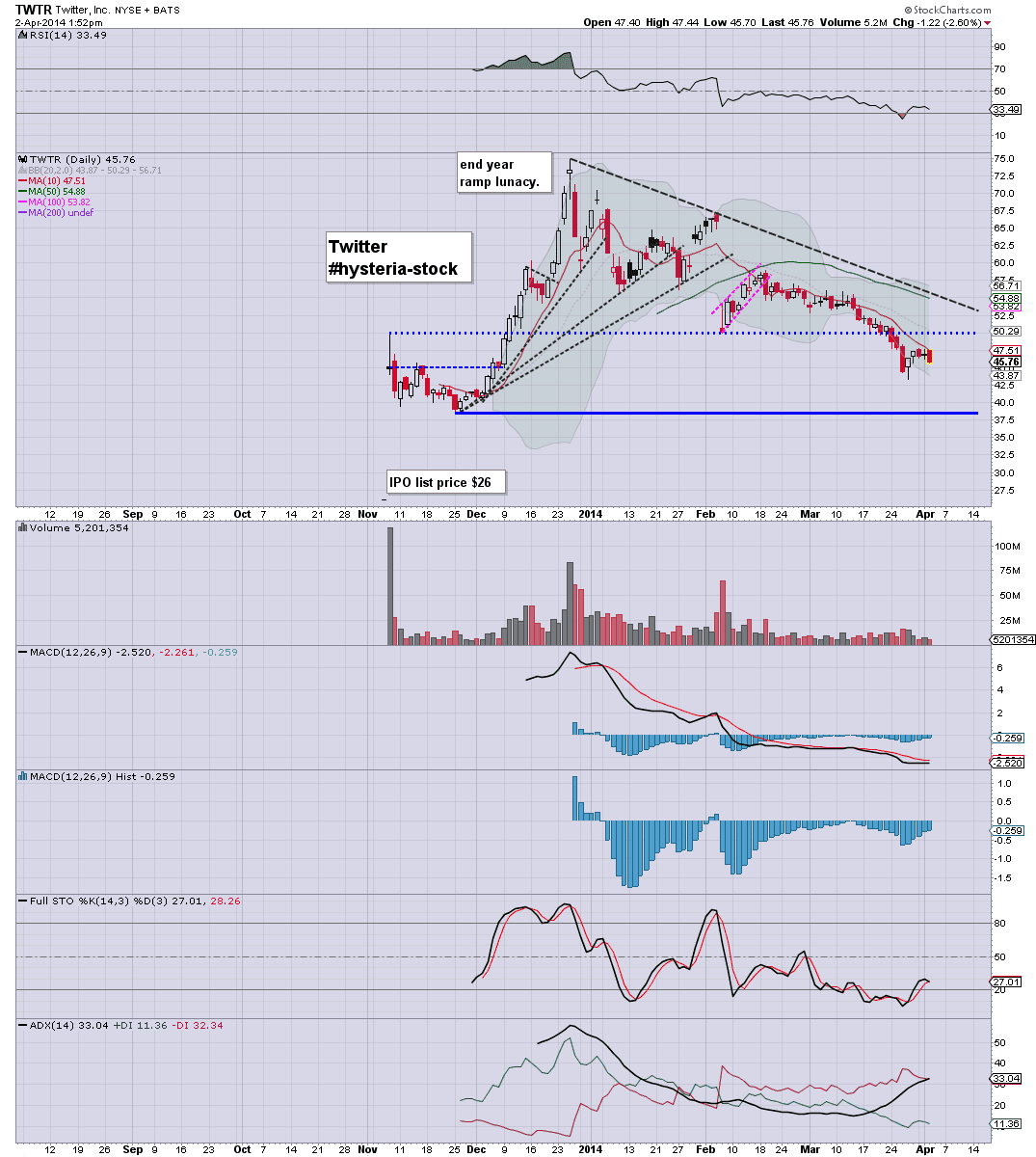 stay tuned!
Posted by Trading Sunset at 18:53:00
Email ThisBlogThis!Share to TwitterShare to FacebookShare to Pinterest

US indexes are holding moderate gains, with the sp' battling to hold the 1890s. Metals are showing some significant gains, Gold +$10, with Silver +1.1%. The miners are naturally doing well, GDX +2.7%. Oil continues to see minor chop, and remains somewhat weak. 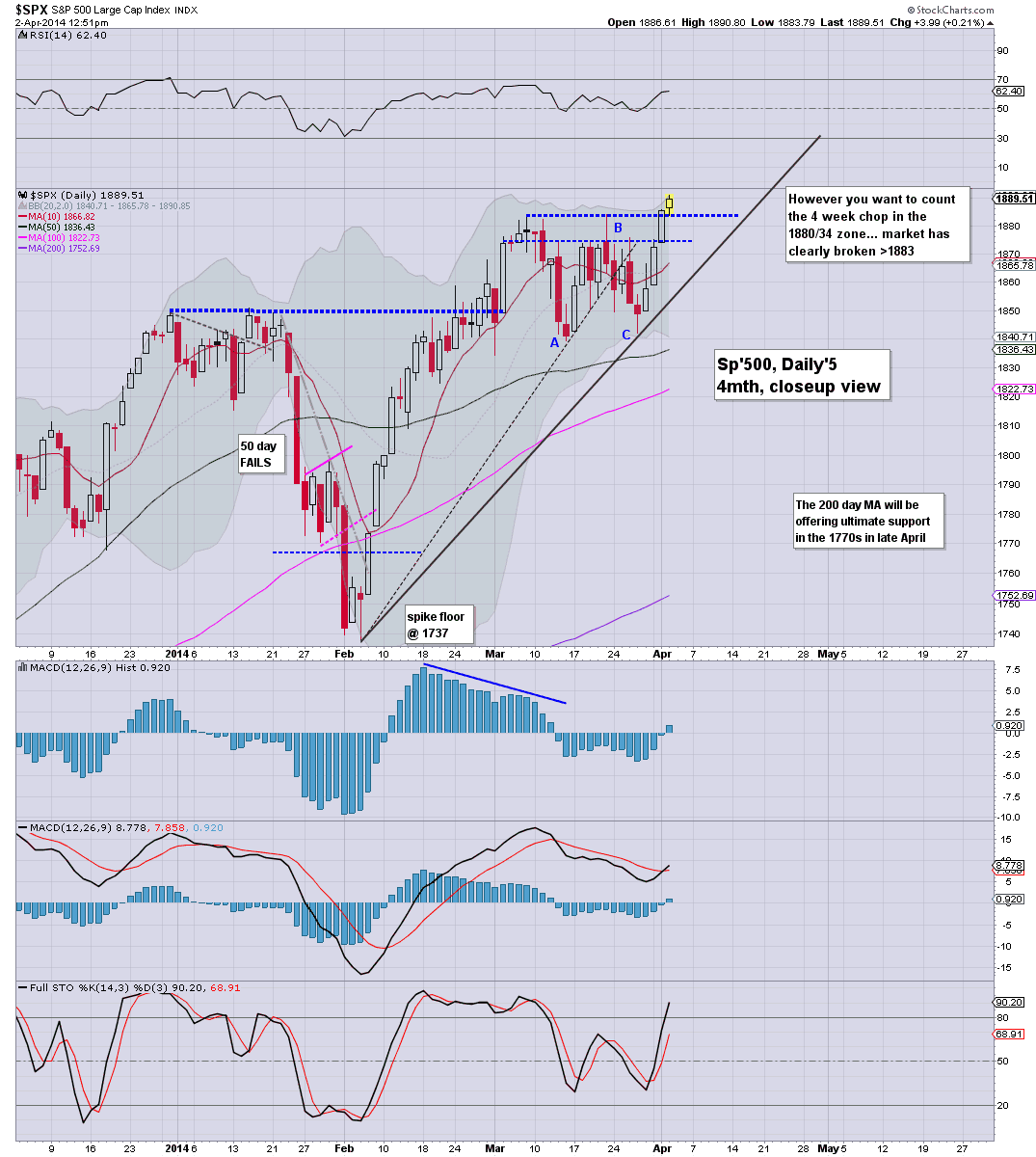 A retrace? Ohh yeah, its gonna happen, but it might be from the low 1900s, rather than here, and I'm not going to play guessing games on the short side of this.

Regardless, I'm content to watch this nonsense today..from the sidelines.

Even the VIX is green, +1% at the glorious height of 13.20s
Posted by Trading Sunset at 17:52:00
Email ThisBlogThis!Share to TwitterShare to FacebookShare to Pinterest

US equities are holding moderate gains, with particular strength in the Transports, +0.7% in the 7700s - an almost unthinkable level, one year ago. Metals are holding gains, Gold +$12. Oil has swung from early weakness of -0.5%, to now +0.2%. 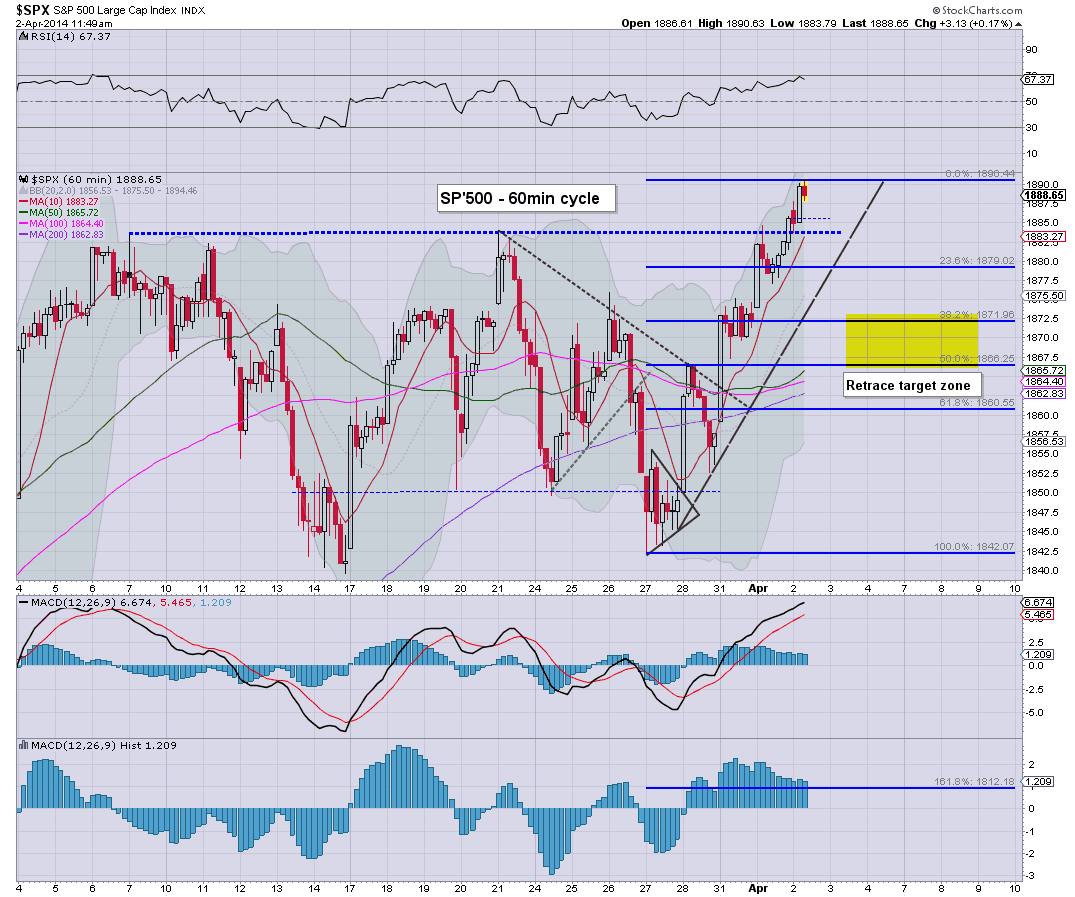 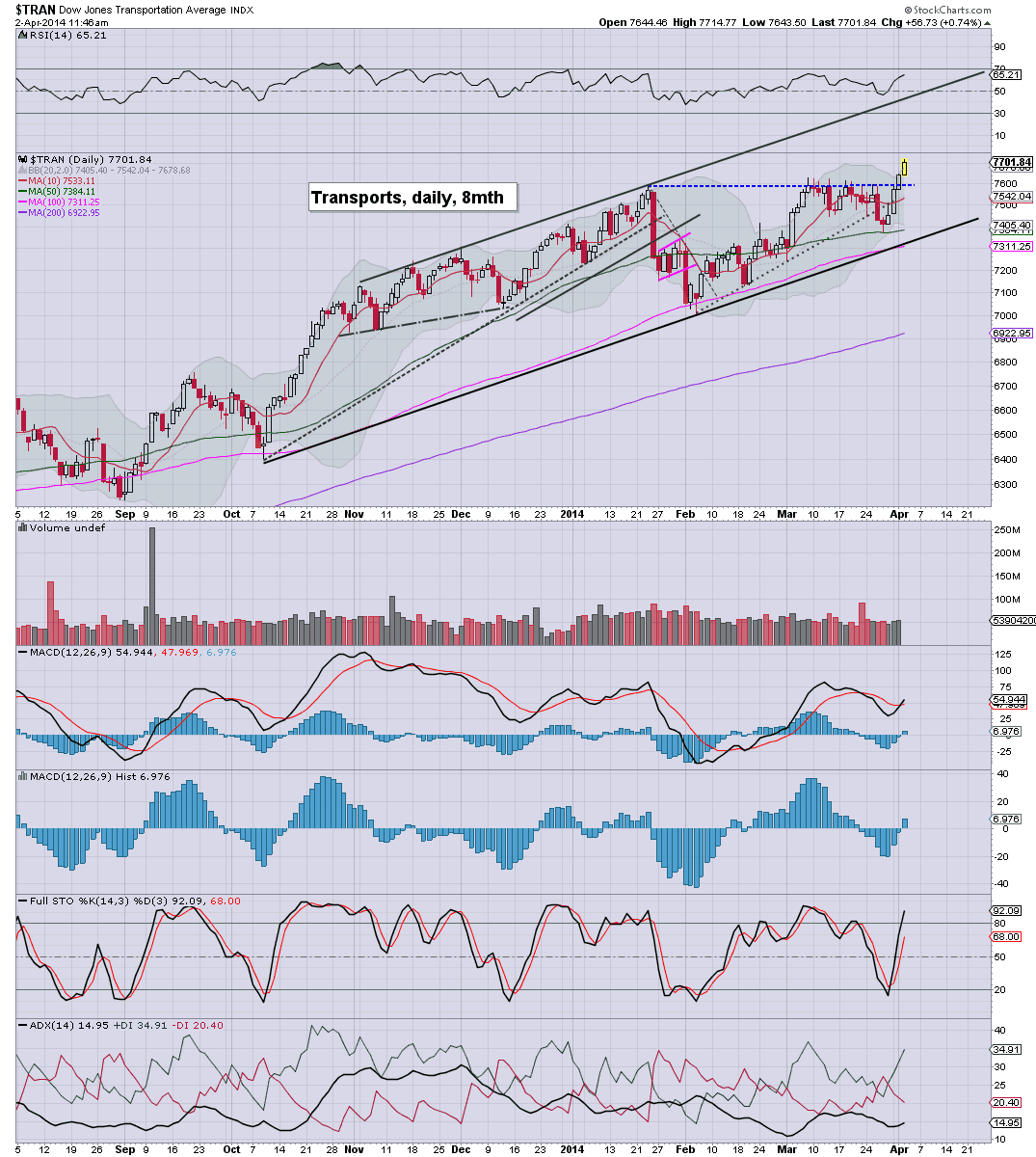 With a break to new historic highs, a retrace might simply not occur for some days..yet there is a small chance.

--
time for tea...
Posted by Trading Sunset at 16:52:00
Email ThisBlogThis!Share to TwitterShare to FacebookShare to Pinterest

US indexes continue to push higher, with new historic highs for the sp'500, Transports, and NYSE Comp'. Metals are holding gains, Gold +$10, which is really helping the gold miners, +2.3%. Oil remains a particular weak spot, -0.3% 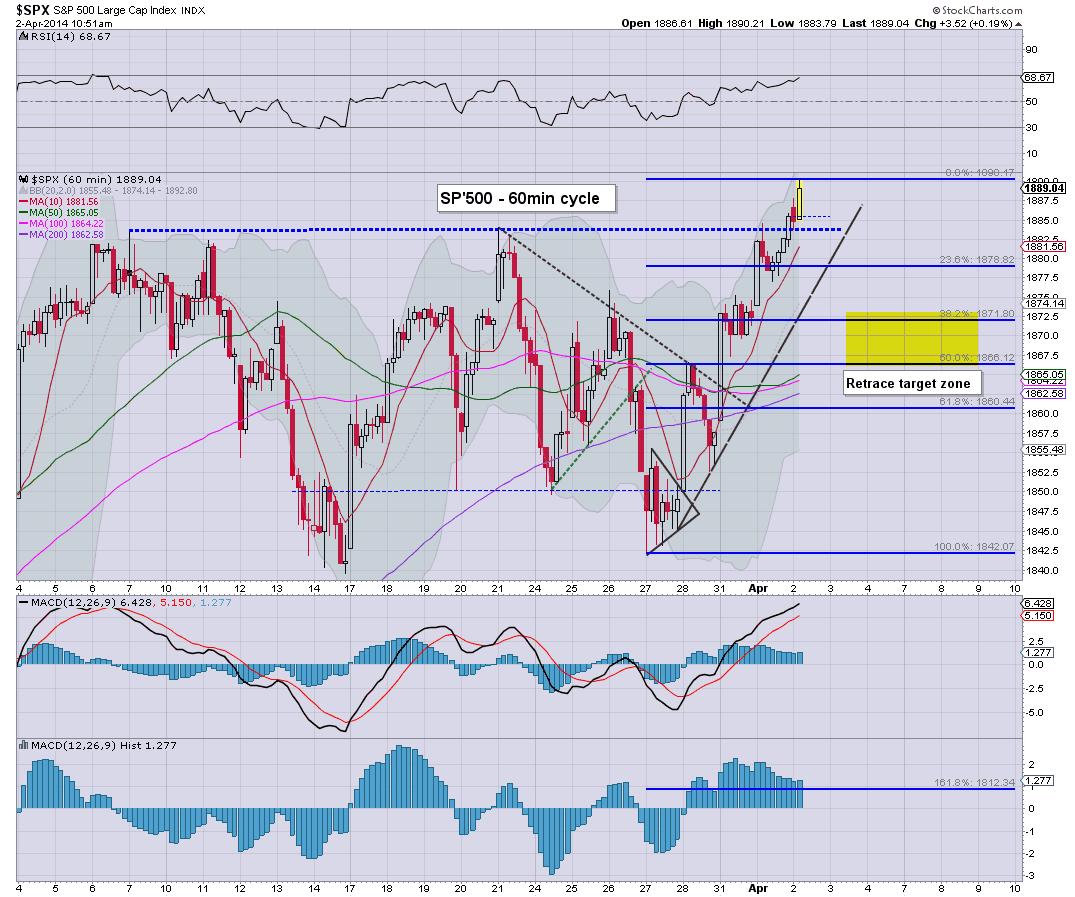 I'm still looking for a retrace, but hey..this nonsense could just keep on going, if so..I'll let it run.

Right now, the best place to jump aboard the long train would seem to be 1870/65, but we just might not pull back.

--
time for an early lunch

*Oil...back to flat...from -0.5%.
Posted by Trading Sunset at 15:52:00
Email ThisBlogThis!Share to TwitterShare to FacebookShare to Pinterest

US indexes open a touch higher, but are somewhat choppy. There is significant probability of a retrace of the recent 1842/87 wave, perhaps slipping to sp'1870/65. Metals are showing some opening strength, Gold +$11, whilst Oil is weak, -0.1% 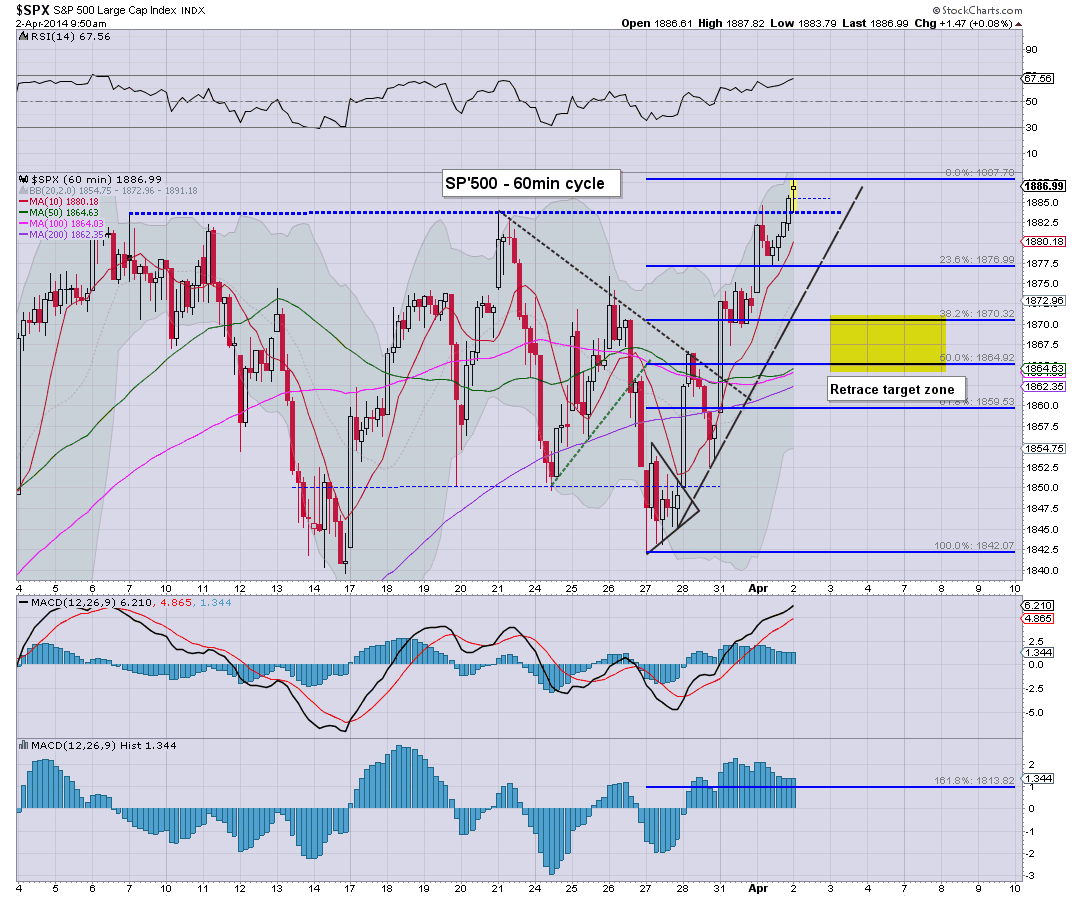 *awaiting factory orders data at 10am
--

I'll consider going long..at that point, but not today!

What I won't do...since new index highs, I won't attempt any re-short...pointless.

Indexes look as though they want to sell lower..at least a little.

Notable strength: GDX +2.9%, helped by Gold +$11
Posted by Trading Sunset at 14:52:00
Email ThisBlogThis!Share to TwitterShare to FacebookShare to Pinterest 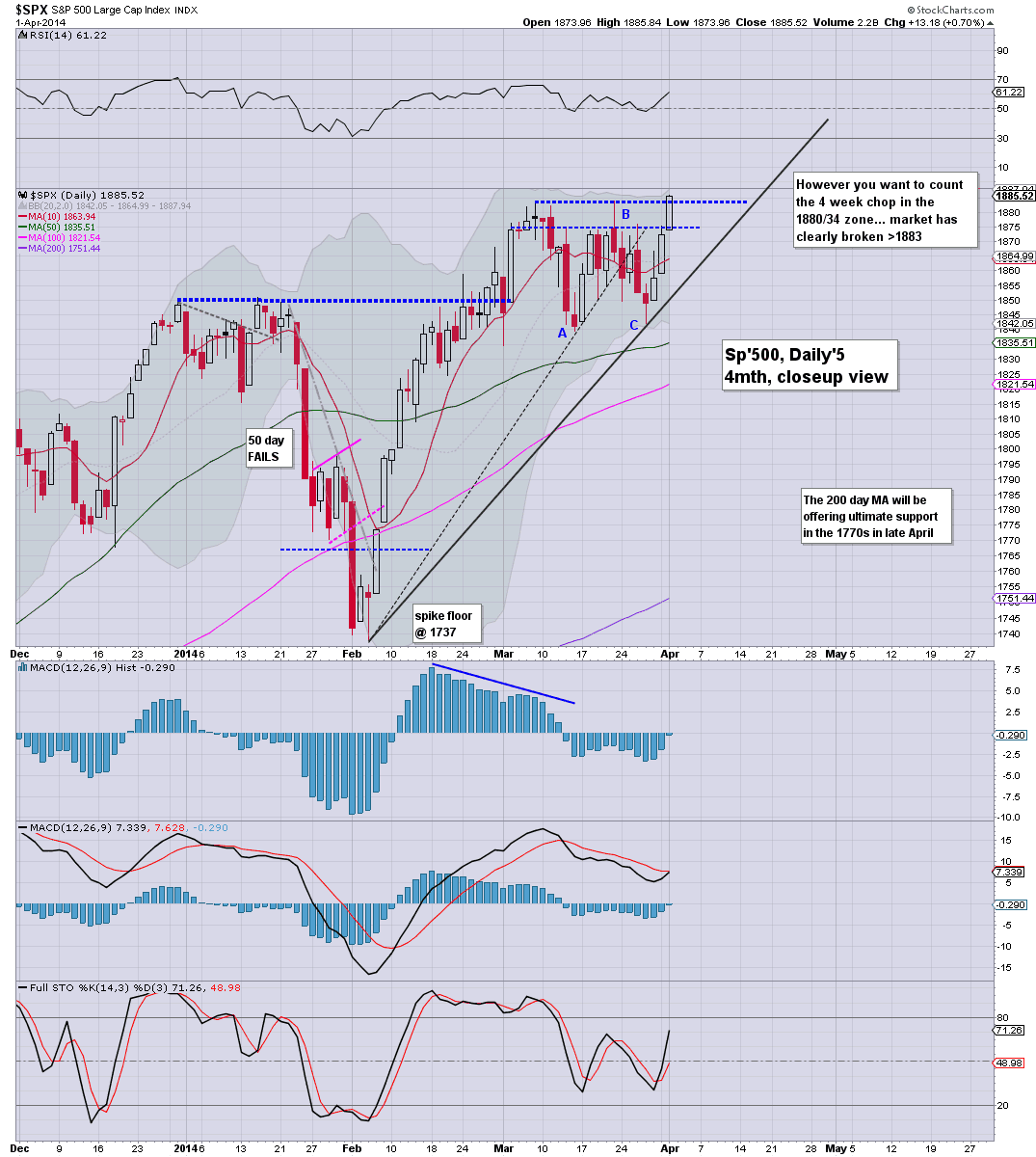 With some minor QE this morning, so long as the data comes in at least 'reasonable', equity bulls have just about everything in their favour.
-- 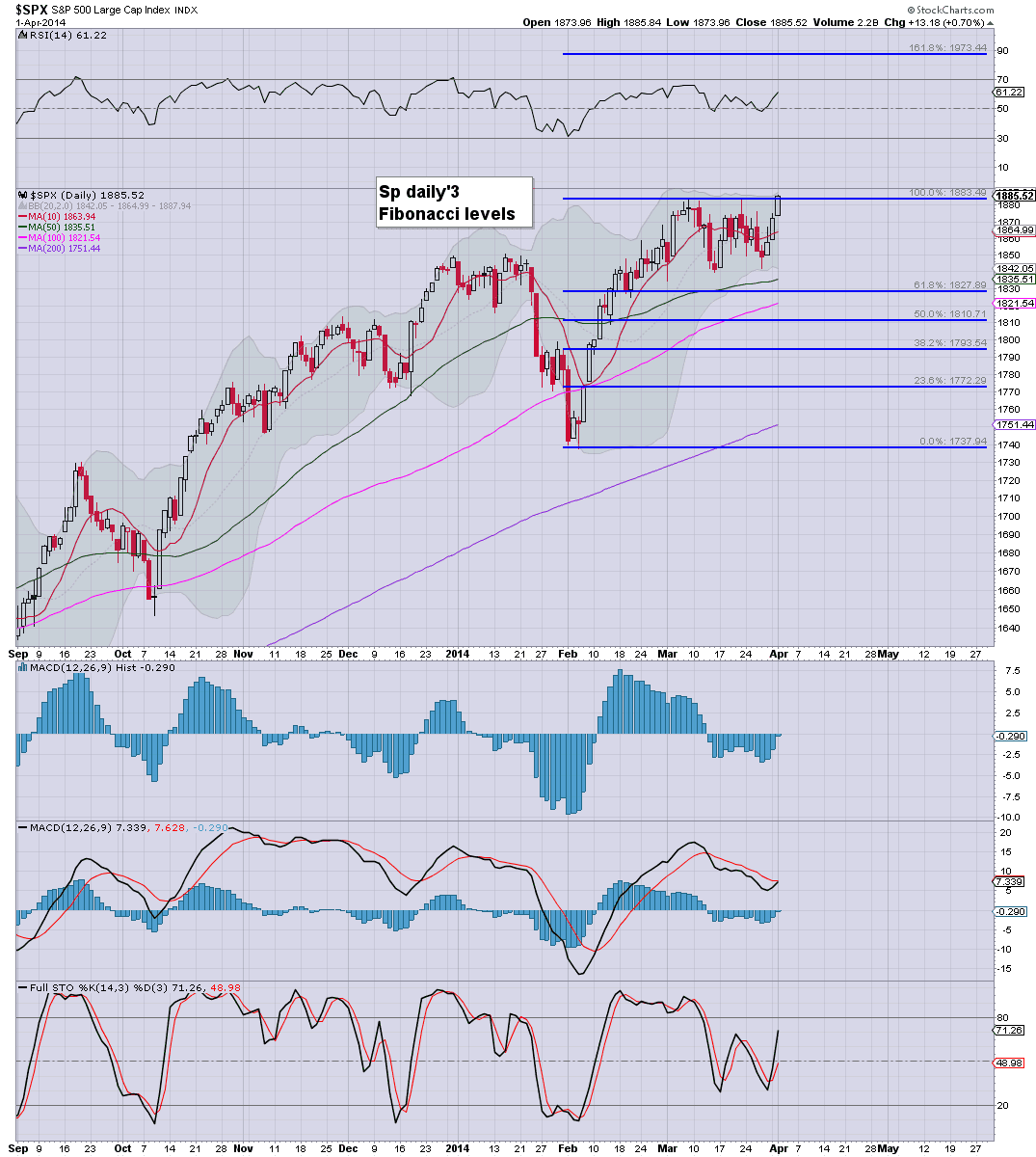 *I am on the sidelines, but will be looking to go long something in the next few days. With new index highs, I have ZERO interest in being short the indexes in the near term.

9.37am.. I'm looking for a possible retrace here,  from the 1842/86 wave, as a long entry..but not today...
Posted by Trading Sunset at 13:07:00
Email ThisBlogThis!Share to TwitterShare to FacebookShare to Pinterest

A new high for a new month

The bull maniacs have started the month with new historic highs for the sp'500 and the Transports. The sp' monthly chart is offering the 1960/70s this April/May, although weekly charts will be somewhat restrictive to the 1920/40s. 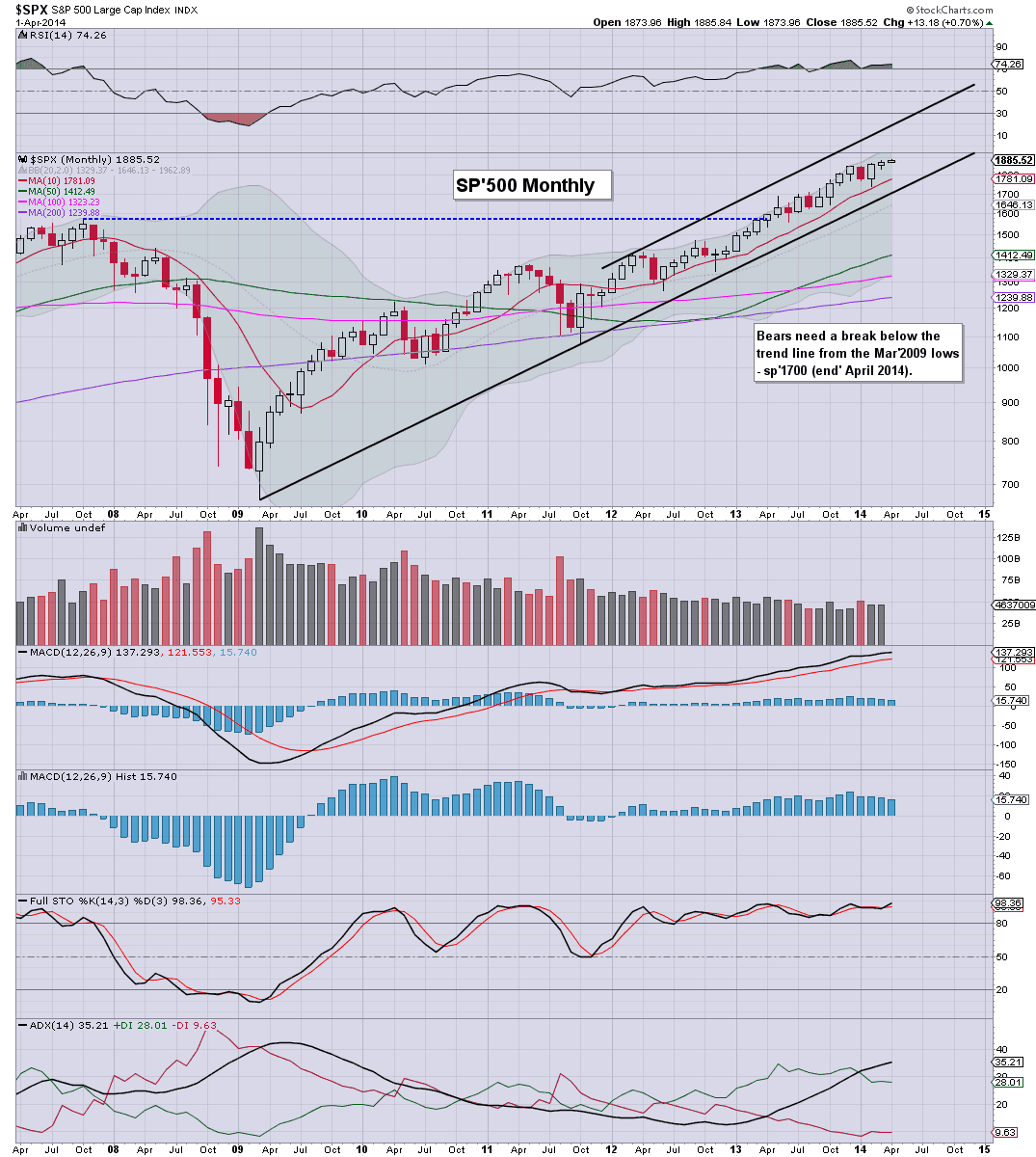 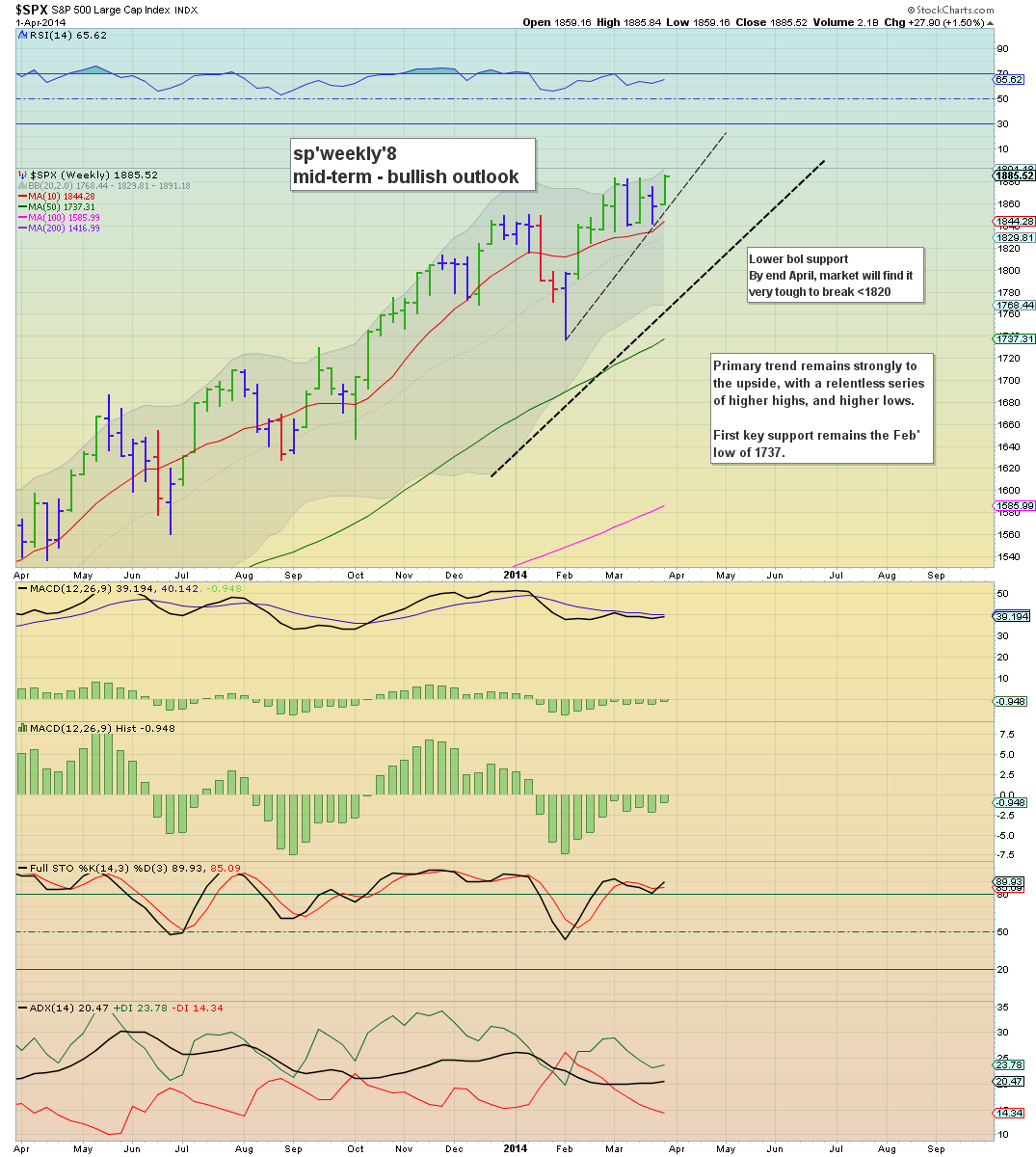 *I have removed an old count from chart weekly'8. With today's break >1883, the only decent thing seems to be just follow the price action.
--

Indeed, regardless of how you might want to count/label this nonsense, the bulls achieved two important new highs today, in the sp'500, and the Transports. The recent minor bearish hopes are now scrubbed, and its back to 'normal service'.

It remains embarrassingly lame for the equity bears, that the declines are so minor..and take so long, whilst the gains are now fast...and relentless.

We have the ADP jobs report and Factory orders. If those come in at least 'reasonable', the market will easily be able to consolidate, or more likely, build upon the recent 3 days of gains.

Yours truly was stopped out early this morning on a core short block. A minor loss, negligible in the scheme of things, annoying, but more so...disappointing. With the sp' breaking >1884 in the closing hour, I was further kicked out of a small secondary short-block, and am now entirely on the sidelines.

As things are, I'm content to do nothing for a few days. Certainly, I'm resigned to further equity upside, I won't be shorting the equity market for some time again.

My bigger concern now is that rather than see a spring/summer multi-month rollover..we'll just go straight up..in the style of 2013, all the way to the 2100s..as many - not least Carboni, are seeking.

Here for the long run

I realise for many out there, not least the few remaining 'doomer bears', today was rough, but it was just another lost battle, in a war for which some do understand the eventual outcome. The economic 'reality' is indeed very different from what the cheer leaders on clown finance TV would have us believe.

The 'new world economy' of the early 21st century is not going to be able to subsist on the productivity of Twitter, Facebook, or least of all..Candy Crush. No, there remain huge systemic issues out there, but right now, Mr Market has ZERO concern for any of it.

US indexes closed with important gains for the third consecutive day, sp +13pts @ 1885. The two leaders - Trans/R2K, settled higher by 0.9% and 1.3% respectively. Near term outlook is broadly bullish - not least with the sp' and Trans' making new historic highs. 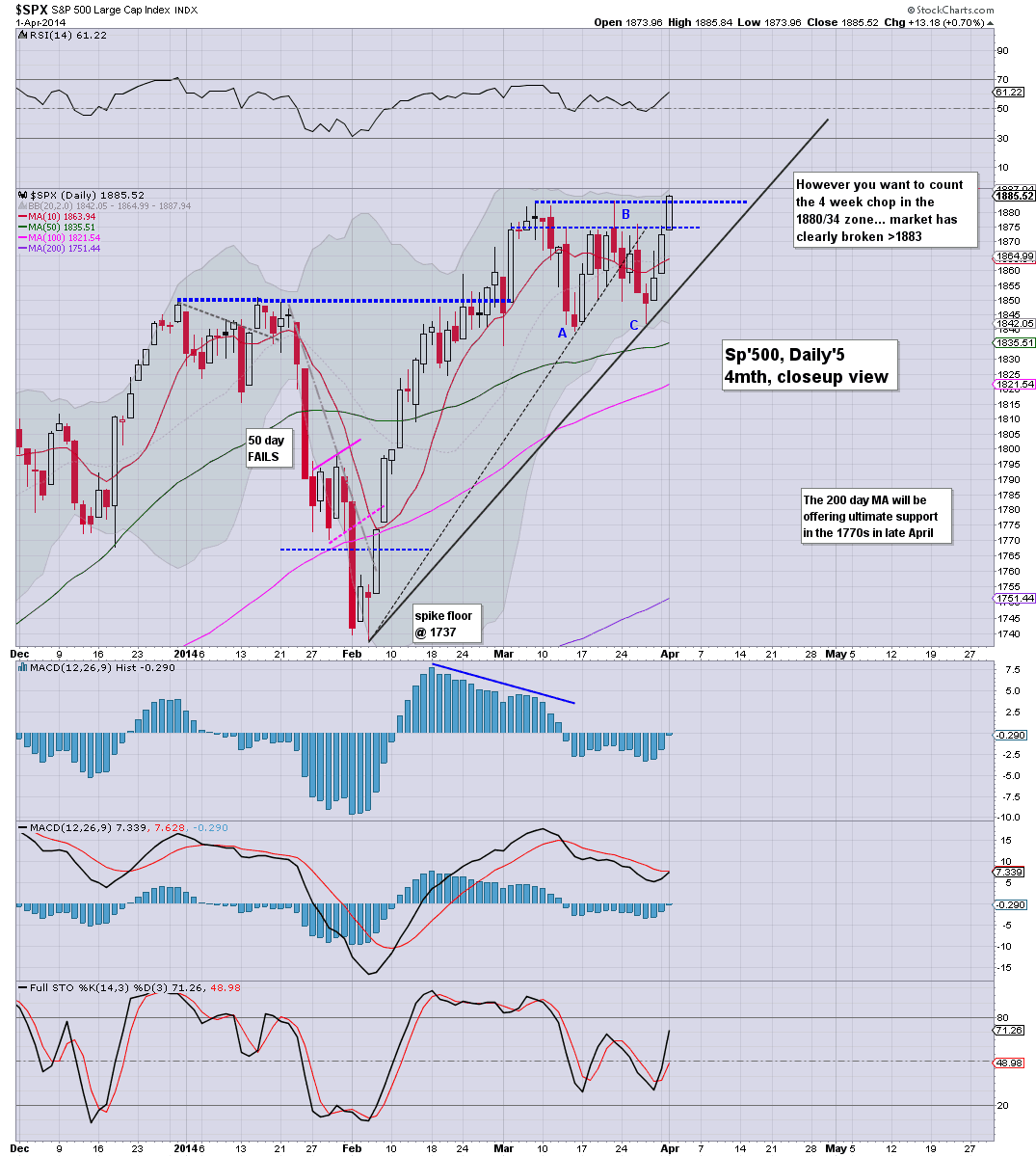 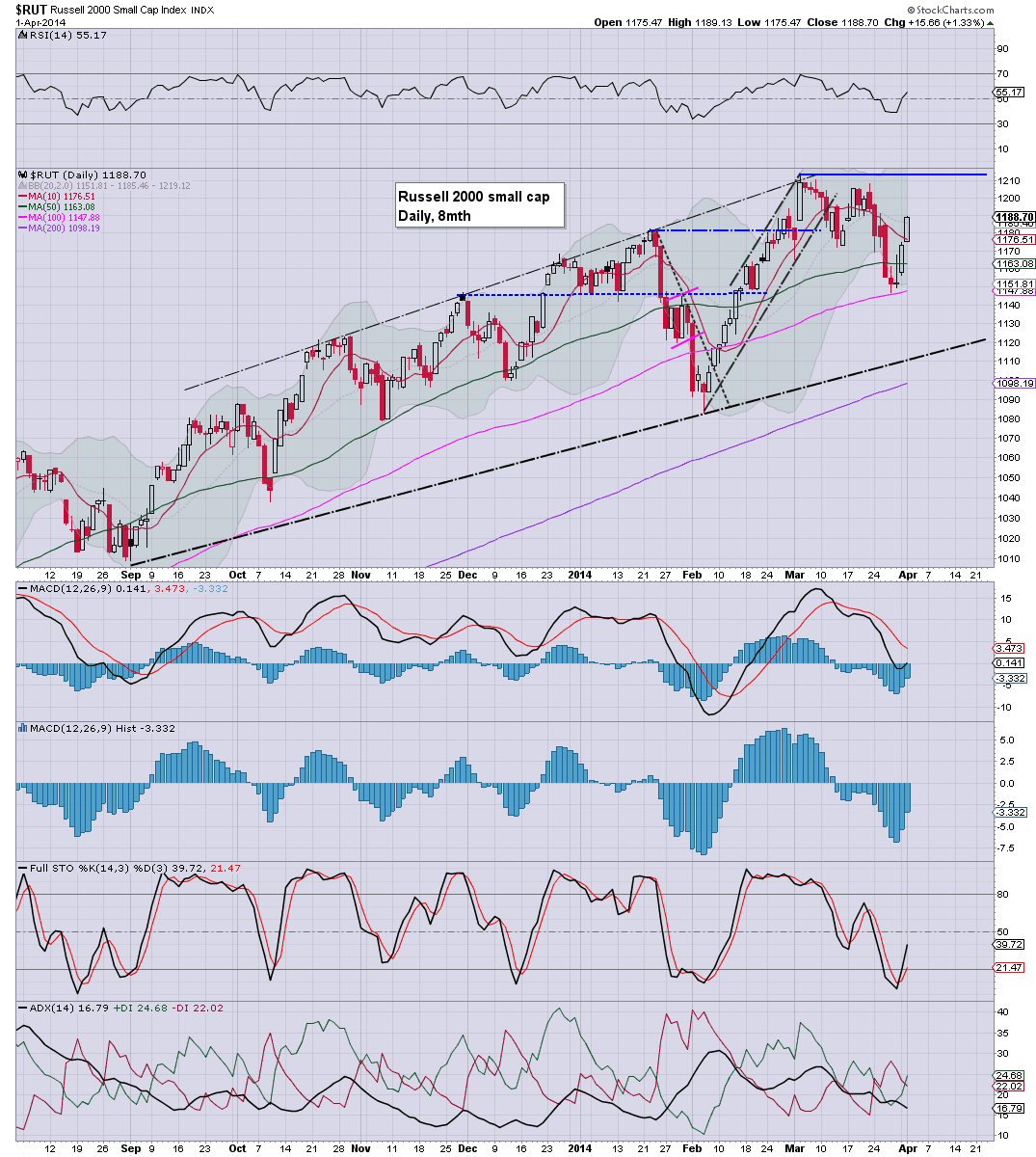 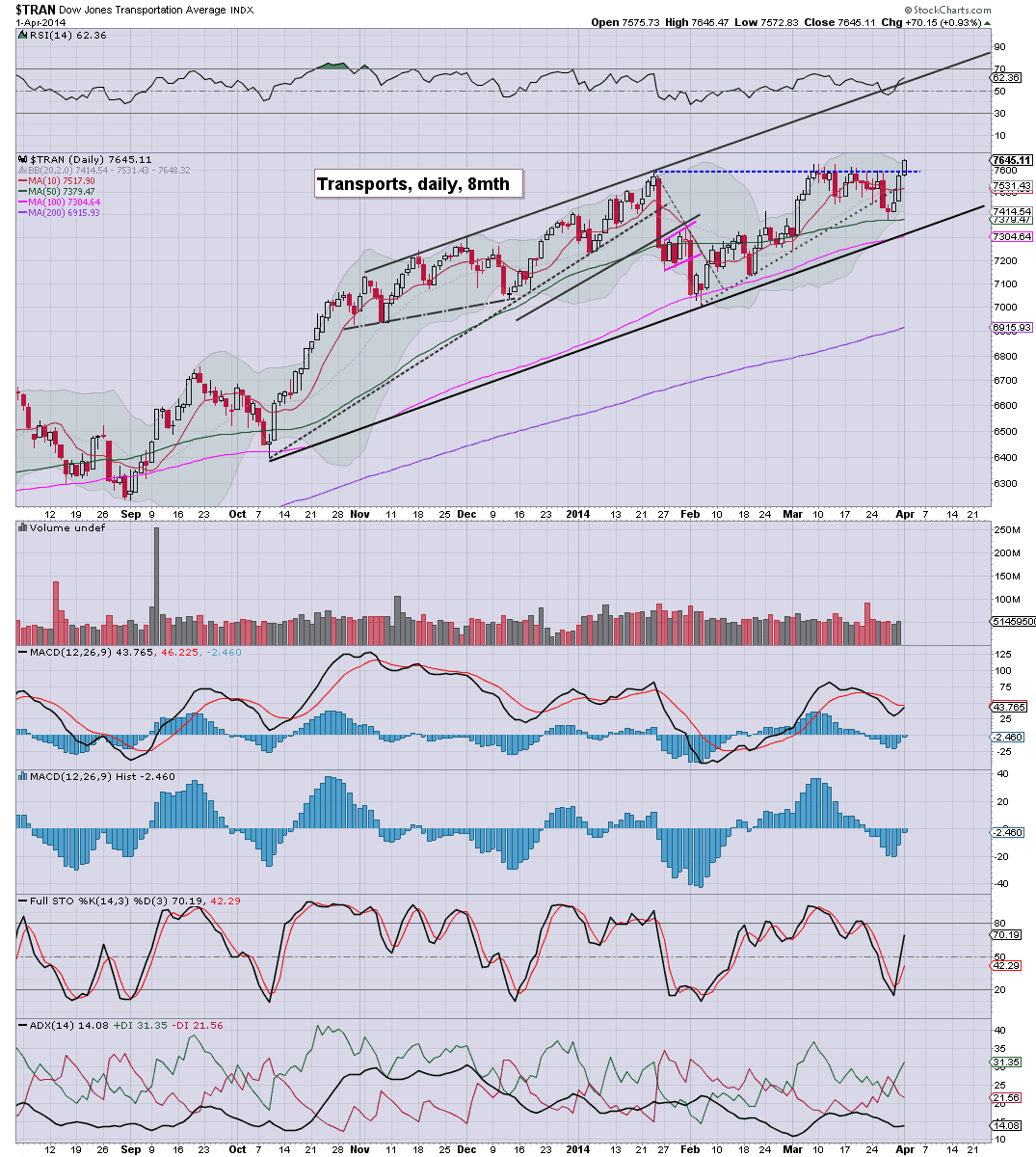 Equity bulls achieved a new high in the sp'500 and the Transports, and the other main indexes will very likely follow.

Underlying MACD (blue bar histogram) is due to go positive cycle tomorrow, and there is indeed high likelihood of much higher levels across April/early May.

The mainstream talk will now likely shift to 'when will the sp' hit 2000?, which is now a very valid question.
-