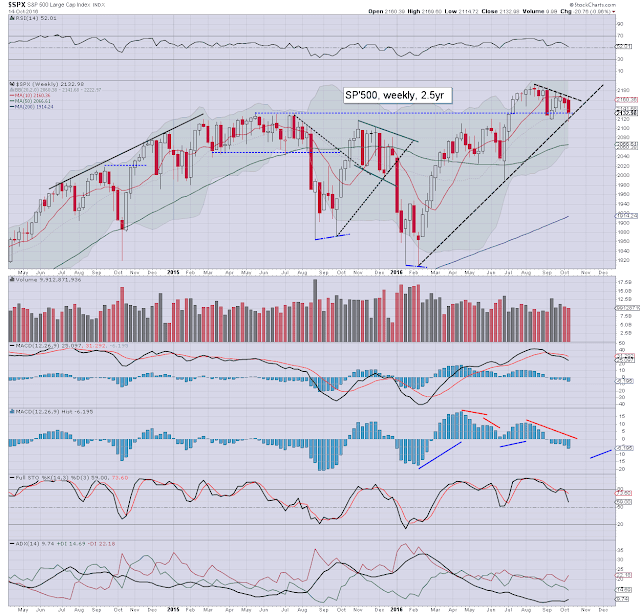 A net weekly decline of -20pts (1.0%), settling @ 2132. The Thursday intraday low of 2114 was very notable, as it decisively broke the strong multi-spike floor of 2119. Underlying MACD (blue bar histogram) ticked lower for a tenth consecutive week, and this is the most bearish price momentum since late February.

Rising trend/support from the Feb' low of 1810 has been marginally broken, opening up the lower bollinger, which is currently around 2060 - notably, just 8pts below the 200 day MA.

Best guess: another 2-3% of downside to the 2080/60 zone, but then sharply rebounding, as nothing of significance has changed in the bigger picture. From there, a yearly close in the 2250/75 zone still looks viable.

Alarm bells should loudly ring on any daily close in the sp'2050s or lower, which would be decisively under multiple core aspects of support. By definition, the next support would then be the sp'1925/00 zone. 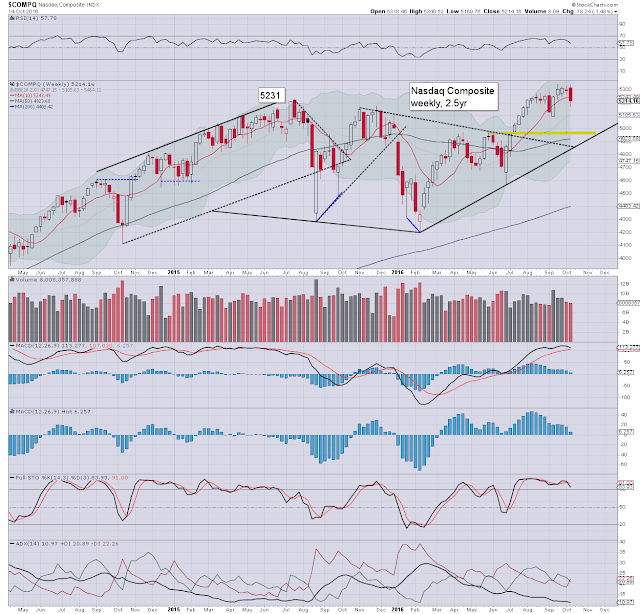 The Nasdaq settled -78pts (1.5%) at 5214. It is notable that the Nasdaq came within 2pts of breaking the recent historic high of 5242.Underlying MACD is set for a bearish cross next week, and that does bode bearish in the near term. Equity bulls have a comfortable 4% of downside buffer to the giant psy' level of 5K, before any real technical damage is done. Indeed, the sp'2070/60s - with Nasdaq holding around 5K, would be a very natural low, before renewed upside into year end. 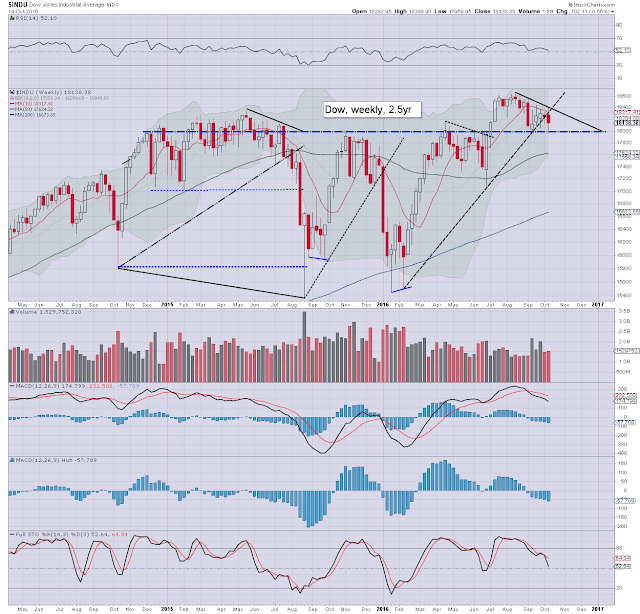 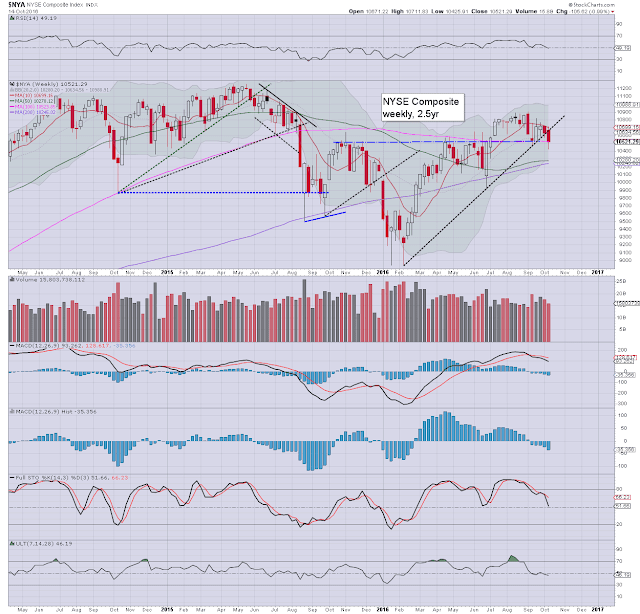 The master index settled -1.0% @ 10521. There is a clear break of rising trend, and the door is wide open for a move to the lower bollinger around 10300/275. Things would turn exceptionally bearish on any price action under the giant 10k threshold. 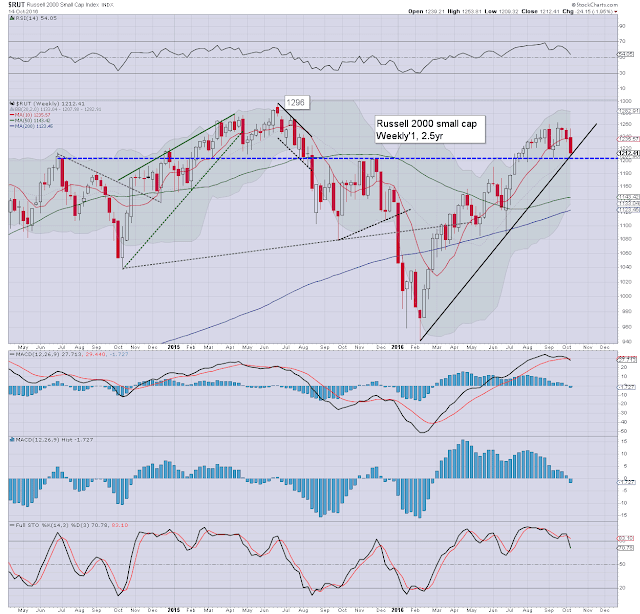 The second market leader - R2K, saw a net decline of -1.9% @ 1212. Rising trend is borderline still intact. Underlying MACD cycle has turned negative for the first time since late February. Any price action <1200 would open up a swift 4% of downside to the lower bollinger - around 1150. 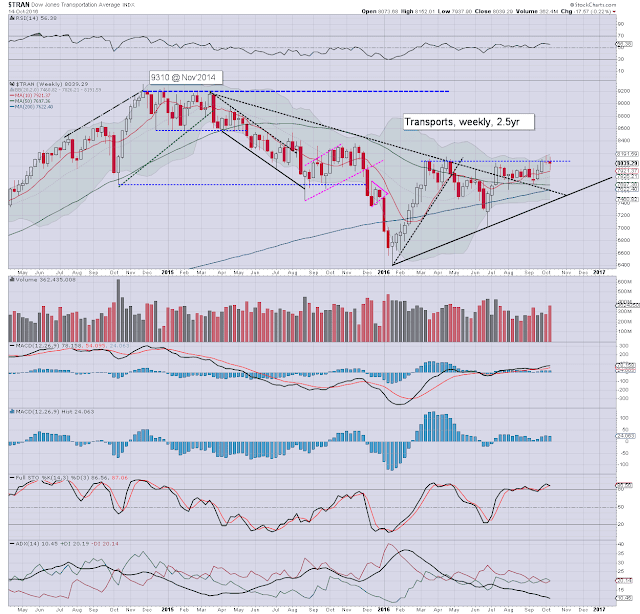 The 'old leader' - Transports, held up the best this week, lower by just -17pts (0.2%), settling at 8039. Indeed, this was the third consecutive weekly close above the psy' level of 8K. Considering WTIC oil prices holding firm around $50, the tranny is holding together very well indeed. Things only turn broadly bearish on a break of rising trend, which will be around 7500 in early November.
--

Rising trend that stretches back to the Jan/Feb' lows is being provisionally broken, lead lower by the Dow.

There is around 3-4% of downside buffer before the equity bears cause any critical damage to the broader upward trend.

The market's 'old leader' - Transports, is notably holding together, which is especially impressive considering continuing strength in energy prices - which is inherently bearish for transportation companies.

Its a relatively light week for econ-data, but there will of course be an increasing number of corp' earnings.

*the only notable fed appearance will be Fischer on Monday.

--
Yours truly continues to write intraday. If you think I'm worth around $1 per trading day, then hit the subscribe button! 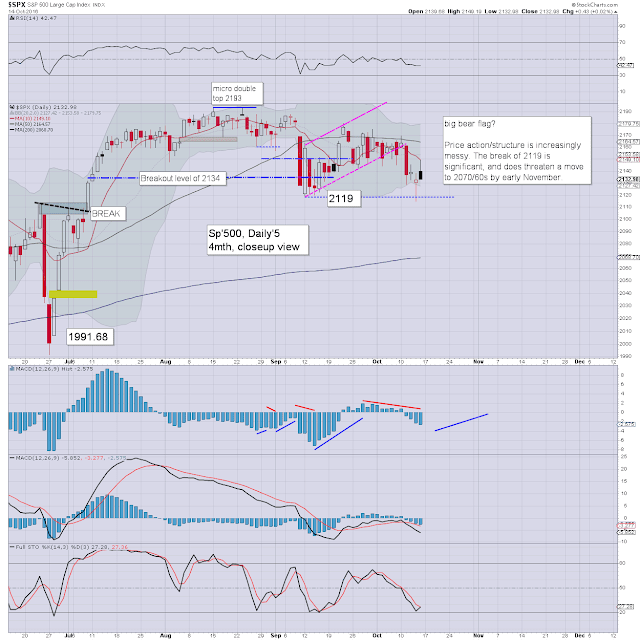 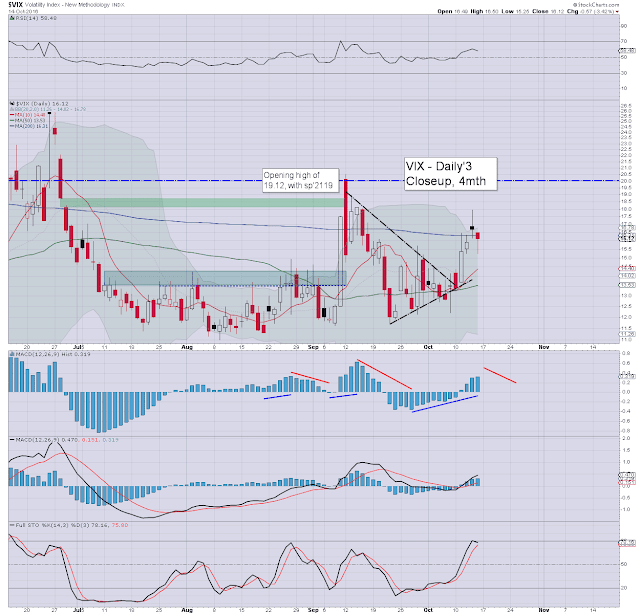 The market opened confidently higher, but naturally became stuck within the little resistance zone of sp'2145/50. From there.. some cooling to 2133, with minor chop across the afternoon.

VIX was subdued across the day, with some moderate cooling into the weekend. Cyclically, the VIX is now on the low end, and will be vulnerable to spiking toward the key 20 threshold, not least if sp <2100.

I am well aware a fair few are still crash calling. We're now half way through the tricky month of October, and all we've seen so far is mostly moderate chop. Soon it'll be November, and the election will be out of the way. 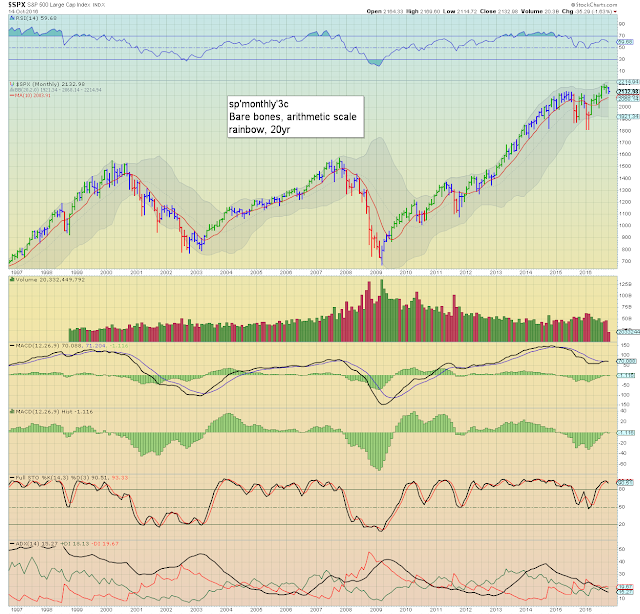 Unless we see a monthly close under the 10MA - currently at 2083, price action is still broadly bullish.