Whilst the main indexes closed moderately lower - inspired by the Google price action, the VIX once again failed to hold onto even minor gains of 2%, and closed 0.25% lower to remain in the low 15s. 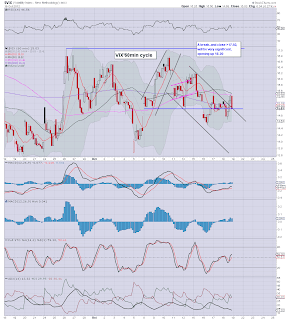 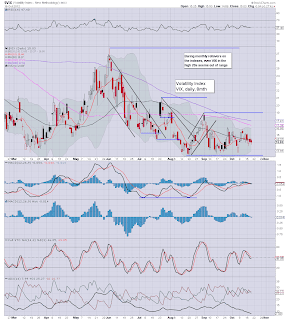 A close in the 17s should be the first target for the bears, but right now, even that looks out of range. Even a test of the recent sp'1427 low will probably not be enough to get the VIX back to the 17s.

Until VIX puts in a weekly close >20, all index declines are to be largely dismissed.

More later.
Posted by Trading Sunset at 22:30:00
Email ThisBlogThis!Share to TwitterShare to FacebookShare to Pinterest 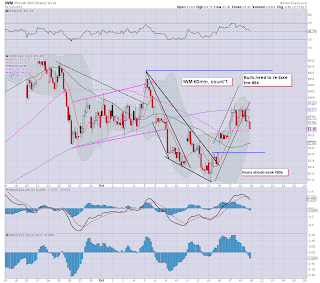 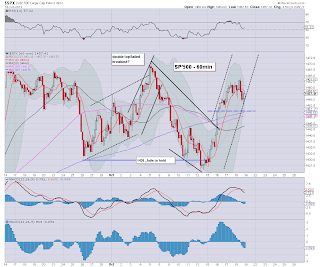 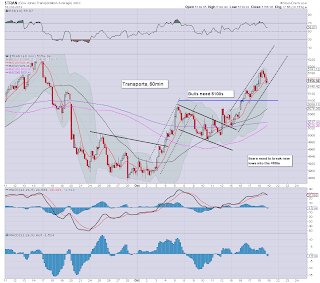 Moderate declines for the Dow/SP', with Nasdaq losing almost 1%. Transports continues to do its own thing, and is close to breaking a few key levels.

Earnings have so far been arguably weaker than the cheer leading bull maniacs were expecting..and these are only Q3 numbers. I'd expect Q4 to come in much..much lower.

Those who were touting a US recession as early as this Spring, are starting to see their predictions pan out.

Yet, for the moment, the market is still holding together..not least as evidenced by the flat VIX in 15s.

back later.
Posted by Trading Sunset at 21:06:00
Email ThisBlogThis!Share to TwitterShare to FacebookShare to Pinterest

With the lousy GOOG earnings, Mr Market is seeing the 3 day rally come to an end. If the high is in for this cycle, then some very exciting days could be ahead. First critical level is the Monday low of sp'1427.

VIX is slightly higher, but considering GOOG, its still lagging. 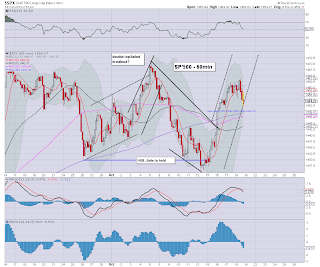 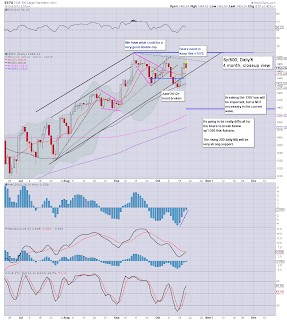 Things will indeed get very interesting if we can take out the 1427 low. That seems out of range tomorrow, so I'd really only look for that next week.

As noted a few hours ago, bears should seek a close <1450. That would be a major victory for the bears.

Much more after the close.
Posted by Trading Sunset at 19:53:00
Email ThisBlogThis!Share to TwitterShare to FacebookShare to Pinterest

A dull...boring morning....but that was superbly ended by the early release of the GOOG earnings report..and a real stinker of a report it seems to be.

Main market is trying to break the morning lows, although incredibly the VIX remains flat. 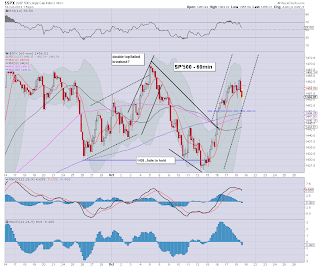 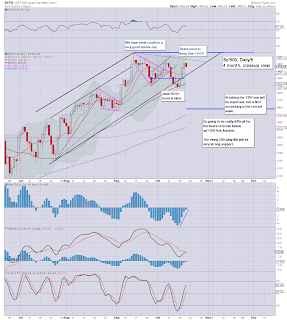 A little drama always helps, and the GOOG has really turned today into something worth being part of.

Bears should seek a close <1450..if that's the case, it'd make for a very nice turn day, and perhaps, would mark a second lower high - as seen on the daily chart.
--

*GOOG remains halted, and it 'should' reappear before the 4pm close,but frankly, were I a day-trader -with a GOOG long (or short) position, I'd be really concerned right now that they might not relist until tomorrow.

Regardless, its all pretty exciting stuff.

Google released earnings early (someone needs to get fired at the close of business today), and GOOG is collapsing. The main market has slipped..a little. 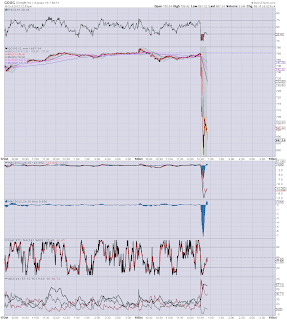 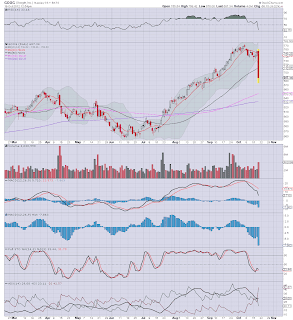 *as at 12.52pm..looks like GOOG been suspended as the 10% breakers just kicked in. Confirmed.

So good to have a bit of drama on what was becoming a very boring day!

Looking for weakness into the close.

back at 2pm
Posted by Trading Sunset at 17:55:00
Email ThisBlogThis!Share to TwitterShare to FacebookShare to Pinterest

The broader market is largely flat, tech' is a little weak, with the transports sporting gains of 0.75%. VIX remains muted, currently -1%. Essentially, its all dull..nothingness. 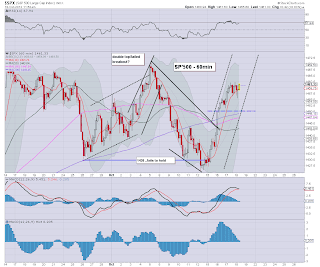 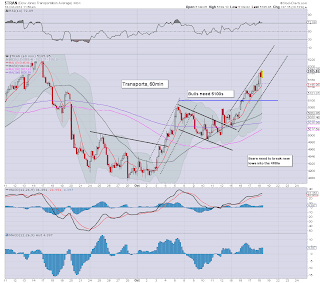 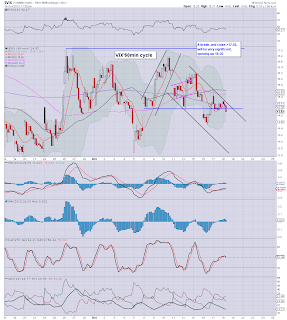 back at 2pm
Posted by Trading Sunset at 16:54:00
Email ThisBlogThis!Share to TwitterShare to FacebookShare to Pinterest

Good morning. Indexes are opening choppy, a micro move to the downside, but its really all noise. There seems a complete lack of energy to the downside, and I'd be very surprised if we manage to close lower by more than 0.5%.

VIX remains muted in the low 15s, and is sporting a black fail candle on the hourly - not a good start for those seeking index declines across the morning. 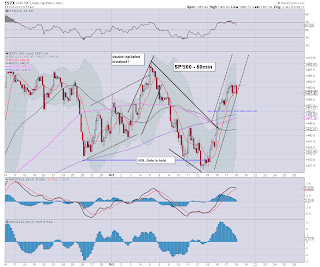 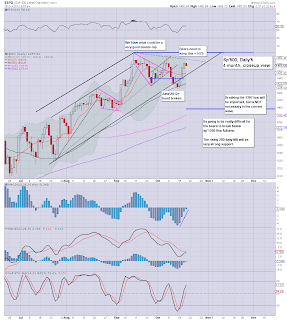 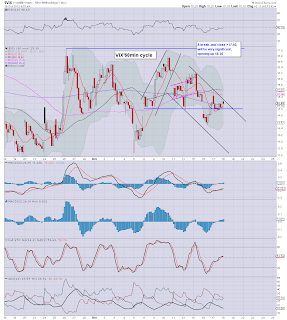 I really don't expect much today or tomorrow. More than likely, we'll just put in a few doji-candle days, not least because its opex tomorrow.

At noted on the daily sp' chart, bears need to keep this nonsense below 1470. If we go no higher than 1462, that would make for an acceptable lower high, but then we'd need a strong rollover next week, and take out the recent 1427 low. Right now, that looks a tough task.

*as many have noted, metals and Oil are weak, and are not confirming this weeks market rally.

Perhaps the most bizarre aspect of the financial year so far is the price action of the Euro currency. Despite literally hundreds of scary news reports/rumours, the Euro has managed a very strong rally since the 1.20 (to the dollar) lows in July, to the current 1.31, although we are only fractionally higher since the 1.30 opening level in January. 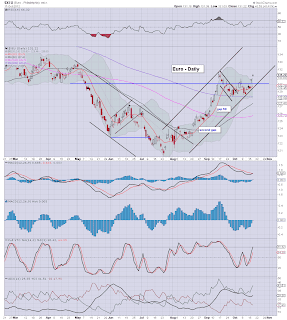 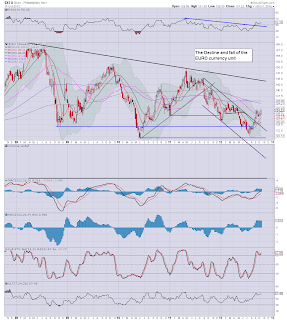 The weekly chart looks disturbingly like it could be a bullish flag/pennant of some type. If that is the case, then the target would be somewhere between 1.37 and 1.43 in early 2013.

I have no doubt some Euro members will leave the currency union at some point, but that could literally be some years away. To my own surprise, there is now a distinct calm across the Eurozone. Yes, there have been some notable social disturbances in many countries - not least Spain and Greece. However, there is very little fear in the actual currency markets, traders seems very content with how things are right now.

The current uptrend does look set to continue. Only with a break back below the weekly 10MA - currently @ 1.28, would I be able to consider that the current up cycle is complete.

If the up trend does continue though, then the outlook for US equity market would most certainly have a very strong currency motivator.

All those bullish maniacs still touting sp'1550/1600 by year end are STILL on track with their 'everything is alright with the market and the global economy' outlook.

The last thing that comes to mind..is the 'fiscal cliff' issue, but hey..the political lunatics will merely delay that for another year or two, right?

Goodnight from a Euro-less London
Posted by Trading Sunset at 03:00:00
Email ThisBlogThis!Share to TwitterShare to FacebookShare to Pinterest

The broader market showed gains for a third day, although the Dow and Nasdaq lagged due to IBM and INTC. We are still yet to break the QE spike highs of mid September, but we are likely within a single strong trading day of making such new highs. 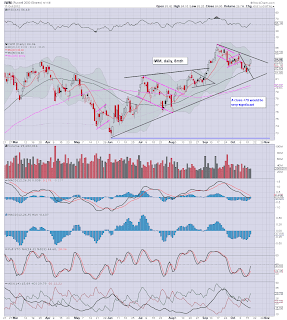 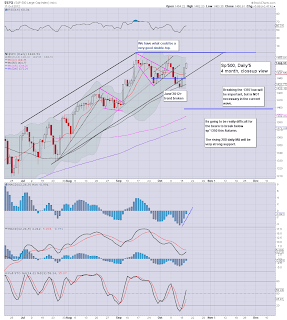 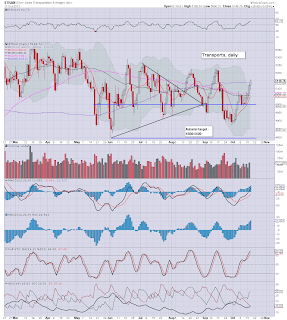 Lets start with the tranny, which has closed above the 200 day MA for the first time in around a month. Bulls should seek a weekly closing high >5250 next week. That is certainly well within range, and the current trend supports it.

I will note again, the break last week of the June rising support (across all indexes) IS an important issue to keep in mind, but that can be entirely thrown out as irrelevant, if we break sp'>1474 in the coming days.

The bulls are clearly back in control, and with opex on Friday, we are very likely to maintain the weekly gains so far, and merely trade sideways.