With Friday closing a little lower, the edge was taken off what remain some pretty bullish weekly index cycles.

Lets take a broad overview of the six main indexes... 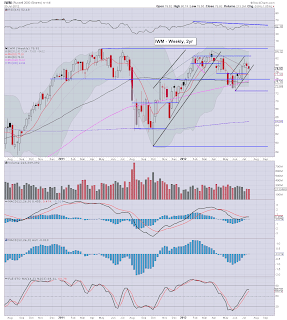 Interestingly, IWM again got stuck around the resistance zone of 82, and we've now seen two consecutive weeks of lower highs. There is however no clear turn lower on any of the usual indicators though 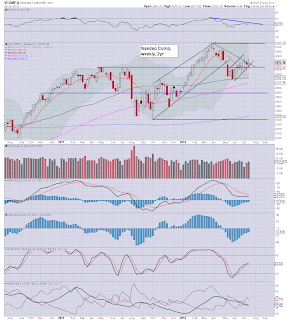 Tech is looking a little weak, but so far..nothing conclusive. All the bears will need is a break back below the 10MA of 2869. Nasdaq 2600 would be a very reasonable target in the next multi-week wave lower. 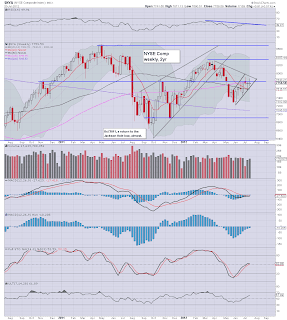 The master index remains the best measure of where the market is, and so far..we're not broken above what is a key declining trend from the spring highs. Bears need a break below (what is still quite possibly a giant bear flag/wave'2), currently 7725. 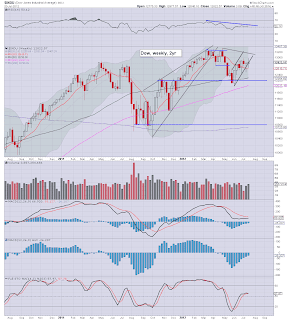 The Dow remains pretty strong, bears need a 200pts fall to break the weekly 10MA, and then the door should be open to a move back to 12k - equivalent to the recent sp'1266 low. If 12k fails to hold in the next wave down, then a VERY likely target is 11k, which matches up with trends/support as seen on the monthly cycle chart. 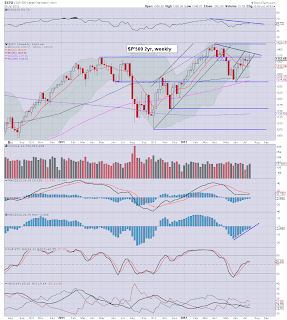 Bears need a break below last weeks low of 1345, and preferably the weekly 10MA of 1335. There is a lot of resistance all the way to the recent June low of 1266. It will not be easy for the bears to break new lows in August.

From the bullish perspective, bulls need a break over 1380/90, any closes over 1390..would probably allow a full re-test of the April highs of 1422. However, any closes over 1390, and the monthly index cycles will start to turn bullish again, and it would be close to destroying ALL the 'big picture' bearish outlooks. 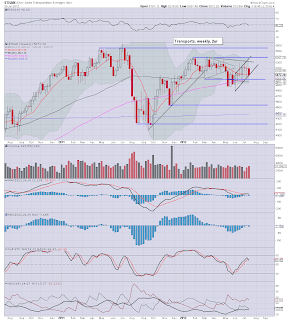 Transports - the 'old leader' remains the weakest sector/index, and that is clearly seen with this weeks closing action on Friday. Arguably the bear flag/ wave'2 is now being broken, and we did close Friday below the weekly 10MA. The next key level is the big 5000, and that should open up a fairly accessible move to the June lows of 4800. Primary target for Aug/early Sept' would be at least 4500 - probably equivalent to sp'1225/00.

First, its important to recognise that the bears are still fighting what remains a broad up trend. We've seen a strong move from sp'1266 to Thursdays peak of 1380...with the Friday close of 1362.

From a MACD (blue bar histogram) cycle perspective, there is NO clear rollover yet on any of the indexes. Even the tranny is yet to show anything really decisive.


Targets for next week

Where will we open Monday ? That's too hard (and probably pointless) to guess. With AAPL earnings at the Tuesday close, its still possible we might yet put in one final high -which would be truly annoying for those holding short across the weekend.

Most important of all, we have US GDP Q2 data next Friday - along with EU GDP data also next week. That should be a very serious reminder that the US is slipping into a recession - as is already the case in Japan, UK, and the wider Euro-zone. The US economy is not going to be magically immune, and when Mr Market comes to price this in...that should become our wave'3.

A very exciting and potentially clear turn lower should be apparent by the end of next week.


Posted by Trading Sunset at 20:58:00
Email ThisBlogThis!Share to TwitterShare to FacebookShare to Pinterest

Doom to ponder this weekend

With the main indexes closing a little lower today - although certainly nothing dramatic, here is something to consider across the weekend. The following outlook was one that I started to consider whilst we were roughly half way down along blue wave'1. Well, we're seen a strong blue wave'2 up from 1266 to 1380.

Next up....blue wave'3. Next week may well open higher (most Mondays tend to, especially after a lousy Friday), but I'm pretty confident next week will end pretty fiercely red. 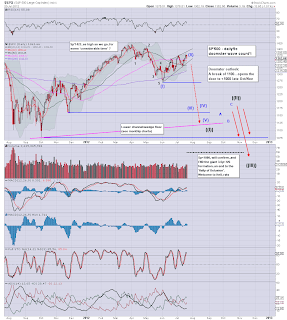 The downside indicated in this doom outlook is severe, but then so are the fundamental problems out there. We're already seeing the Spanish market collapse again - with bond yields soaring, things on the EU side of the big pond...are getting really bad.

*Don't get overly focused on what might come AFTER blue wave'3. First things first, lets see what sort of volatility we get in the next week, and whether we can see a dow -200 or even -300 day.

On any basis, we should have a good shot at hitting 1225/00 in August, and the Fib' extension would suggest as low as 1170 -which also happens to be a key level on the monthly chart.
-
special note...
I do hope some of the postings are 'useful'. It has been good to see a few more of you add yourself to the 'followers list'.

Goodnight..again.
Posted by Trading Sunset at 03:00:00
Email ThisBlogThis!Share to TwitterShare to FacebookShare to Pinterest

Just a very short update, to close the day and the trading week. 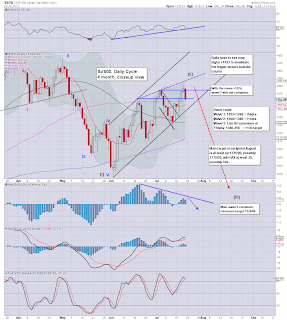 The third little blue tower on the MACD cycle has indeed developed this week, and today showed the first sign of a rollover. Bears should look for some follow through - even if its just a few pts lower, on Monday.

Clearly though, bears really need to see a break below sp'1350 to open the door to the next key zone of 1310/00. It is very viable we could hit that level near the end of next week, but we'll need VIX back above 20..

--
I'll probably do a weekend update late Saturday, detailing the state of the weekly cycles. Suffice to say, it was a very mixed picture for the week as a whole.