Another crazy week at the casino

With the close of sp'1390, we're now just 32pts shy of the April peak. That's just over 2% - a mere 'strong bullish days' trading. Without question, the trend remains up, and we closed the week strongly.

There is absolutely zero indication of a turn lower. 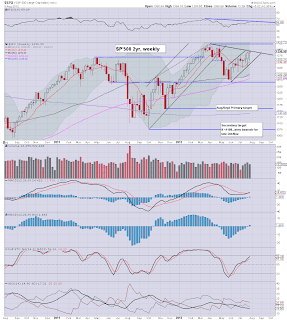 I highlighted the sp'monthly chart earlier. That is now outright bullish - which is a truly depressing way to start August, but the weekly still offers a slim hope.

The bulls will now be clamouring to take out the April highs, and then make an autumnal charge (aided by QE3 ?) to sp'1500..and even new historic highs.

First things first though...lets see if the maniacs can take out 1422 in the next week or so.

For the bears, once again its about taking out the recent lows. Now the first target remains a  break <1355, and then.

Its been a long week, with the Fed, Draghi..and today's latest hyper-ramp nonsense. It remains bizarre we keep battling away at this, its time to rest.

A lousy end to the week for the doomer bears. Very little needs to be added....so here are the closing hourly index charts. 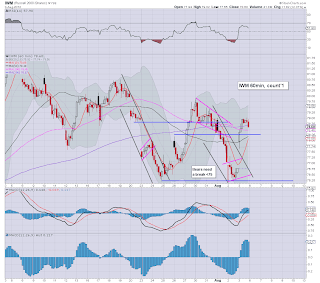 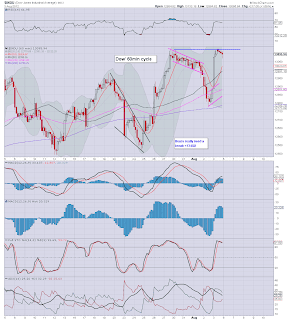 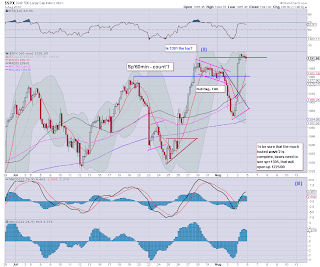 Yes, the Rus'2000 (and transports) are still failing to break new highs), but the rest of the market IS breaking upward.

I can just imagine, next week, the clown networks will start focusing on the next Jackson Hole appearance of the Bernanke, where he'll doubtless say he will 'do what is necessary', even though that might mean doing nothing, but that's still bullish, right ?

The question now has to be asked, was the early June low of sp'1266 the low for the year? There are plenty of 'pros' out there who are still touting sp'1500/1600 by year end. Right now, it has to said, they are the ones on track.


Maybe a little more later
Posted by Trading Sunset at 21:02:00
Email ThisBlogThis!Share to TwitterShare to FacebookShare to Pinterest

Bears failed this week. Arguably, it might be even be the worse fail since phase'1 of the rally of delusion started in Spring 2009.

Not only did the Fed disappoint, but so did the ECB, and yet here we are, with the indexes ramping hard into the weekend, and a VIX which has been smashed back into the mid teens.

There are still a few 'still bearish' aspects out there now, but its not enough to be even remotely confident anymore about the bigger picture.

Worse of all, the SP' monthly cycle is now outright bullish. 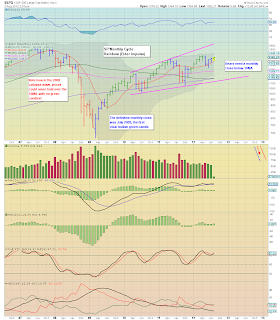 The above chart says it all. We closed July with a neutral candle - after those minor Tuesday declines, yet here we are, and we're now officially getting a bullish candle.

Sure, we could still somehow magically close August much lower, but right now. ANY bear out there has to admit...

The most important market cycle of all, for one of the two leading indexes is now bullish.

A little more after the close.
Posted by Trading Sunset at 19:56:00
Email ThisBlogThis!Share to TwitterShare to FacebookShare to Pinterest 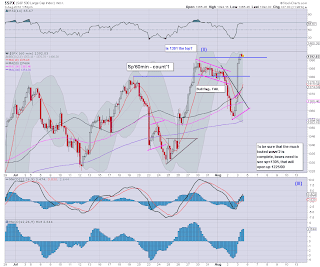 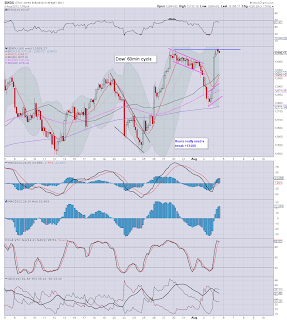 Dow a slightly better double top than anything else out there right now. Yet..lets be clear, the daily cycle is now ticking UP again. There really is nothing now for the bears to be confident about.

Is it not time for Mr Draghi to make another comment yet about how he'll do what is necessary?
--

Well done Bulls..you win again. Despite the reality for tens of millions of jobless in the western economies...you won...again. All thats missing is the 'mutual fund Monday' rallies that we used to have.
Posted by Trading Sunset at 18:58:00
Email ThisBlogThis!Share to TwitterShare to FacebookShare to Pinterest

1pm update - nothing good to end the week

Those who bravely went long into the Thursday close can sure have a good laugh at whats happened today. The giant gap up is holding, and we're only 1 pt or so from the days peak.

We do have a reversal candle on the VIX, but its effectively irrelevant right now. 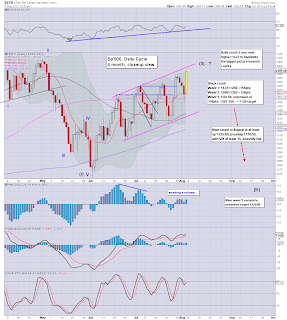 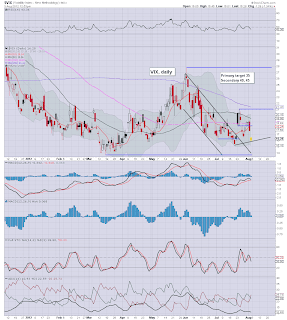 There is nothing good in sight now for the bears. The jobs data - underneath the headlines, is lousy, yet that doesn't matter of course to Mr Market.

A question has to be faced by the bears again, why would anything change now? Even the ECB disappointment is now forgotten, and the weekly and monthly indexes are again outright bullish - at least for the Sp'500

More on that latter issue later.

Well, the notion of a possible double top is slipping away as sp' hits 1393.

The only indexes yet to break about the recent peaks (equivilent to sp'1391) are the Rus'2000 and the Transports, although that's not too surprising, since they have been weak for many months. 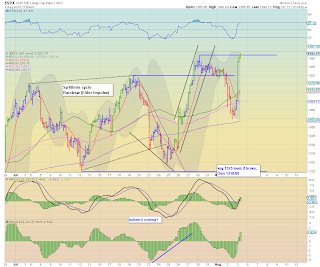 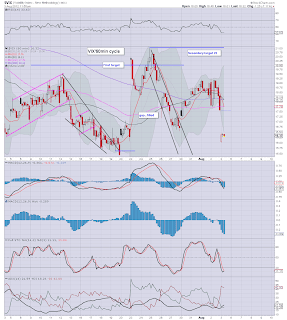 All thats missing is Bernanke and Draghi making some 'bullish' comments.
Posted by Trading Sunset at 16:57:00
Email ThisBlogThis!Share to TwitterShare to FacebookShare to Pinterest

Urghh, an ugly day for those bears who held overnight into Friday. We have marginally broken the recent sp'1391 peak, with a 1392.02 print. I suppose it could be a double top across 5 days, but it sure is disturbing at these levels. 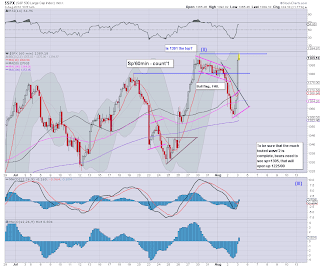 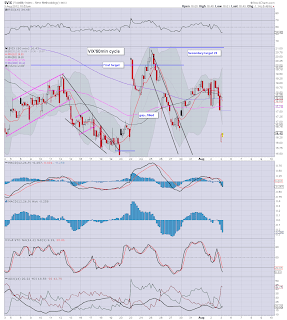 VIX is trying to hold above the opening gap lower.
--

I added another short block a little earlier, but this is without question another rough end to the week for the bears. There does not seem to be any serious downside momentum, as yesterday again showed.

As it is, I'm not entirely hopeful for the rest of today. These sort of opening hyper-ramp openings often take a fair few hours just to stabilise.
Posted by Trading Sunset at 15:58:00
Email ThisBlogThis!Share to TwitterShare to FacebookShare to Pinterest

Another early morning gap/ramp based on more nonsense deceit and lies from the mainstream media about the 'good' jobs numbers. Ironically, I'm even seeing the maniacs on the clown networks still tout QE likely in September, even with their latest 'super good' economic 'pro obama' data. 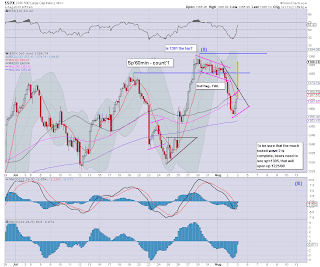 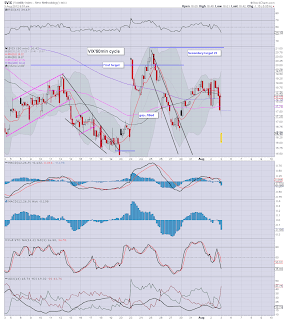 VIX is putting in a reversal candle from a 16.01 opening low.

Urghh !
Posted by Trading Sunset at 14:53:00
Email ThisBlogThis!Share to TwitterShare to FacebookShare to Pinterest

Good morning. Futures are sp+18pts, we're set to open around 1383. Doubtless this will have a fair few bears rattled, although we did see a similar pre-market yesterday, and we sure didn't close green.

The raw 163k number is indeed way above most expectations..futures now sp+18pts 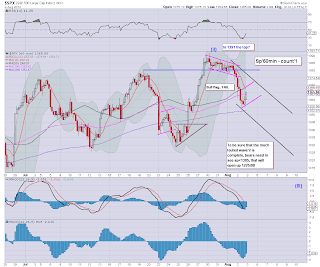 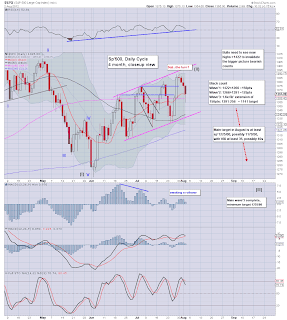 I will look to short any opening bounce we get, first target remains sp'1340.

Certainly, 1380 is some soft resistance at least, I would be surprised if we can hold these pre-market gains for more than the opening 30 minutes.

*we also have ISM non-manu' data later at 10am. Will the service sector also show some weakness?

Those looking to short after the open, looking for a black candle on IWM, and a possible hollow red reversal candle on the VIX.

So...look to IWM.. in that opening 15/30minutes
Posted by Trading Sunset at 12:26:00
Email ThisBlogThis!Share to TwitterShare to FacebookShare to Pinterest

With the Bernanke and Draghi now out of the way, the bears have a window of opportunity. The market is increasingly recognising that the US is also in danger of slipping into recession in Q4.

The bears need to seize this opportunity, and preferably break into the 1330s by the Friday close. 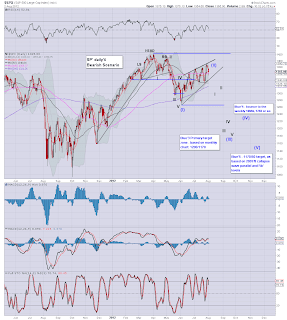 A very mixed and turbulent day for the indexes. Pre-market we saw gains of sp'10pts..only to quickly reverse to -13pts once Mr Draghi noted that 'if even he wanted to do more, he can't, because he is not allowed to under the current rules'. Mr Market was clearly not pleased about that, and the 20pt swing was pretty impressive in the space of just 10 mins.

The latter day bounce was understandable, and it is conceivable we'll open a little higher at the Friday open, purely on the 15/60min cycle momentum alone. 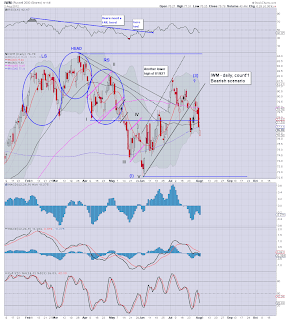 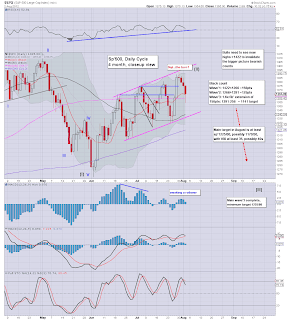 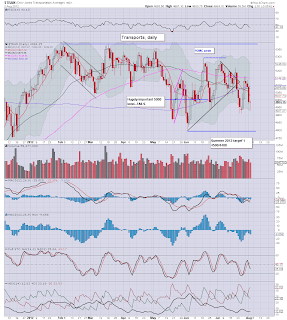 I'll keep this short, its been a long day, so much good entertainment today in market land.

Suffice to say, the daily MACD cycle did get confirmation today, after yesterdays initial rollover.

You can see how much weaker both the Rus'2000  and Transports are compared to the more mainstream sp'500. The cycles are very much lower already, which is a little concerning, but price-wise, we should fall for a least another day or two.

First target remains the lower channel line of 1340. A close in the 1330s close would be VERY pleasing, and set up further declines at the Monday open.
Secondary target is 1325, which would cause real problems for the bulls, and open the door to an attempt to take out the early June low of 1266, and then a charge for 1200/1170.

It is very hard to guess with the looming jobs data, but I will short any opening bounce, if we get one.