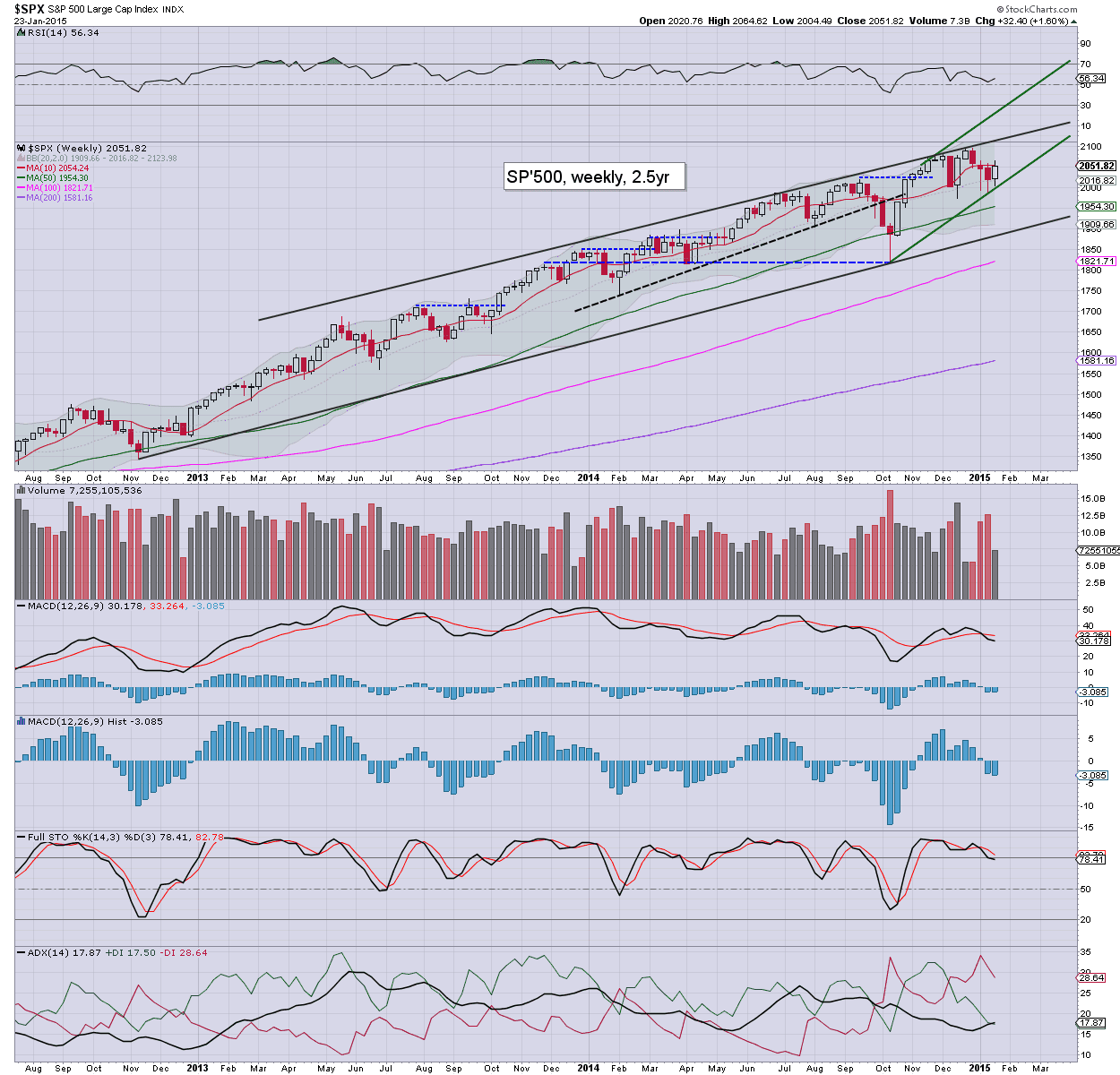 Like all other indexes, the sp'500 saw the first net weekly gain of the year, 32pts (1.6%).. settling the week just under the 10MA @ 2051. Despite the gains, the underlying MACD (blue bar histogram) cycle ticked lower for the fourth consecutive week. There is no decisive turn.. yet.

As things are, equity bears need to break under the giant 2k threshold, which would open up the lower weekly bol' around 1910, but frankly... that seems highly unlikely. Far more probable, is that the market will continue higher into February. First target as suggested by the weekly charts are the sp'2120s. 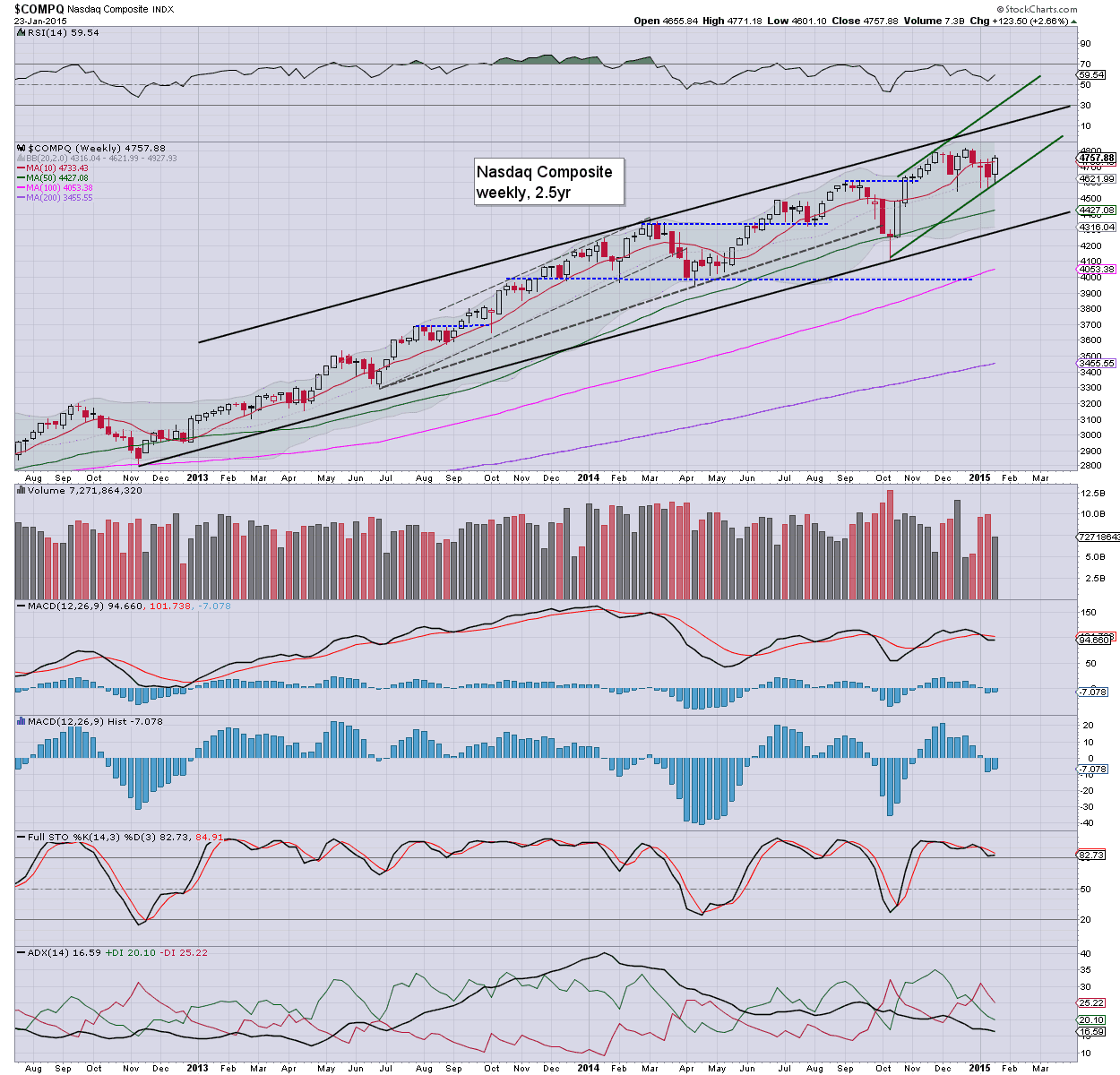 The tech' is leading the way higher, with a gain of 2.7%... now just 375pts away from challenging the March'2000 bubble high of 5132. With the somewhat significant weekly gain, the MACD cycle ticker higher, but will still likely take another 6 trading days to turn positive cycle. 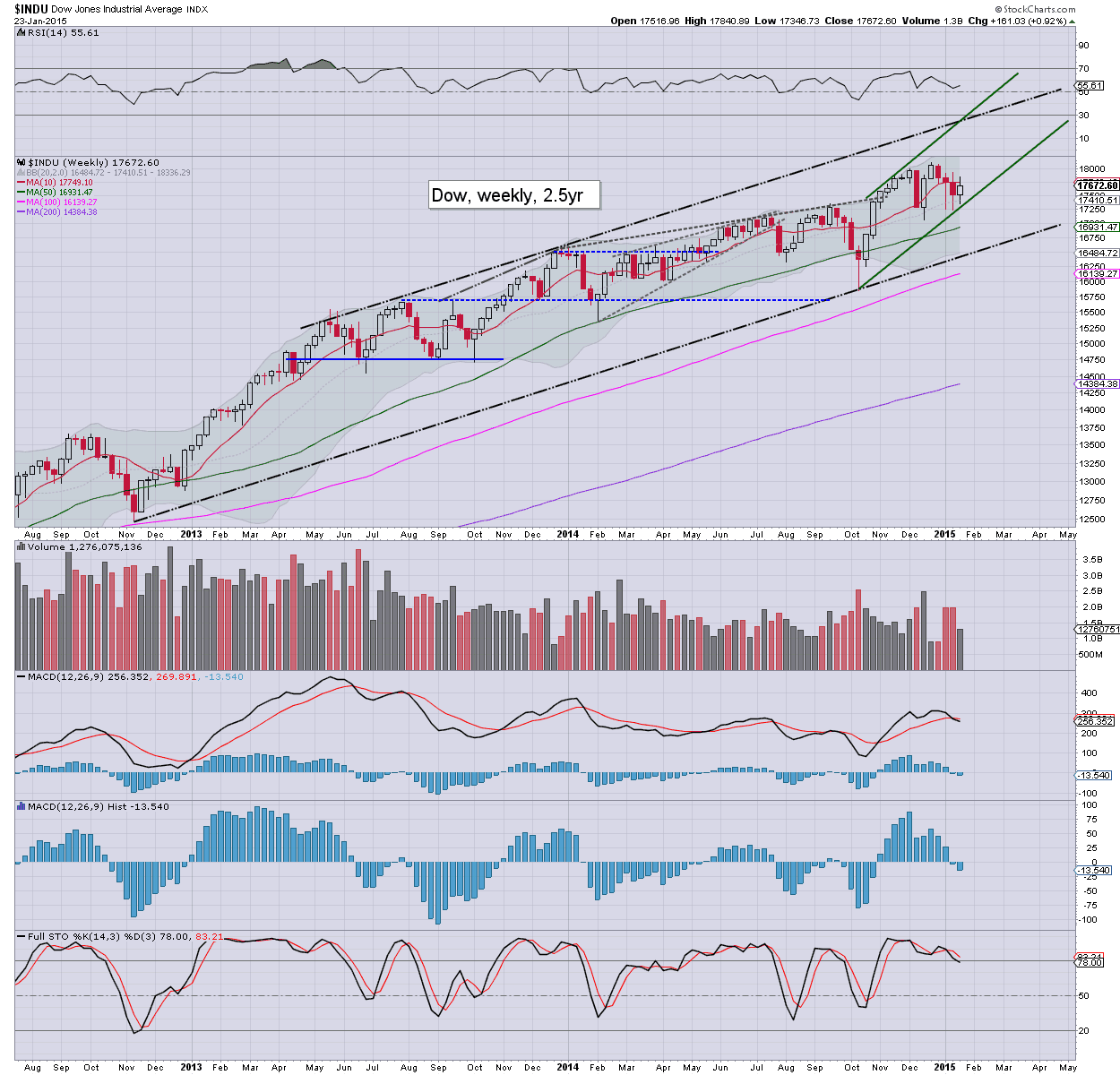 The mighty Dow was the laggard this week, climbing a somewhat moderate 0.9%. The Dec' high of 18103 looks set to be broken, upper weekly bol' is offering the 18400/500s by mid/late February. Critical support remains the 17k threshold... and that doesn't look in danger for some months. 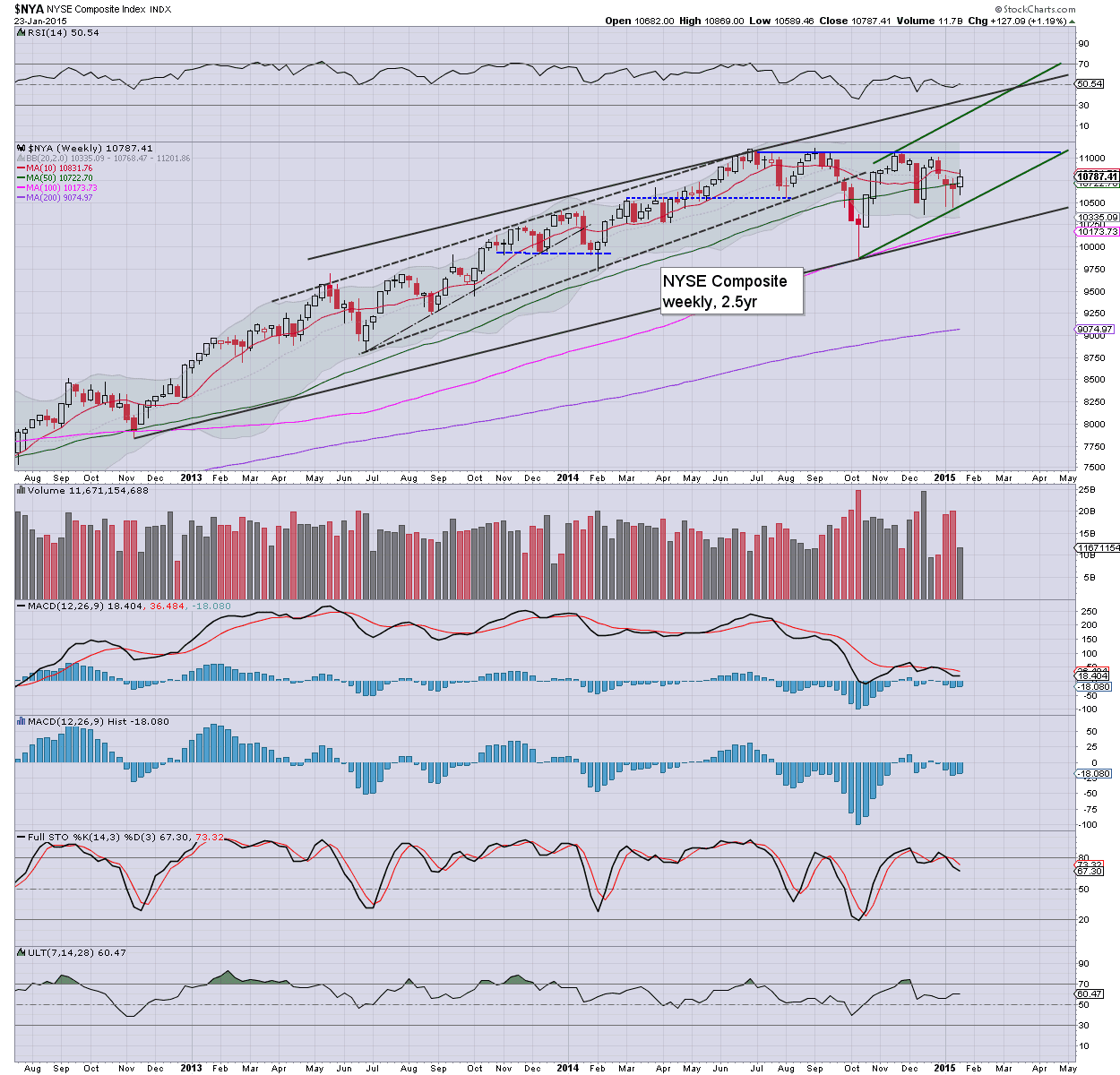 The master index gained 1.2% this week, and remains within a trading range that has endured since last summer. There is viable upside to the 11200s, which is a clear 5% higher... equiv' to sp'2150 or so. 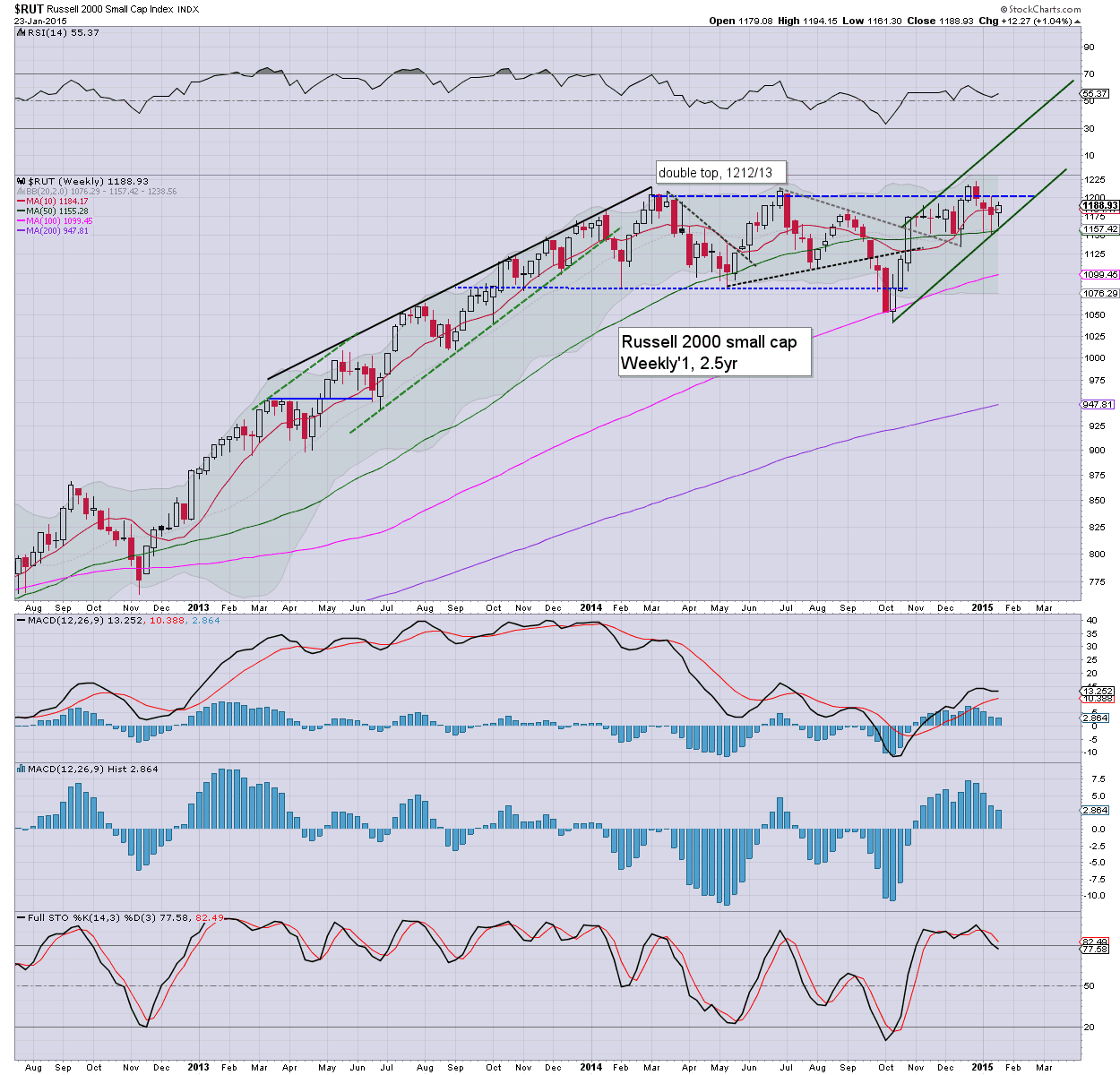 The second market leader gained 1% this week. The past 3 weekly candles are all offering rather clear spike floors around the soft threshold of 1150. It would seem highly probable that the R2K will break new historic highs into February. Upper bol' is offering the 1230s in the near term.

What should especially concern the equity bears is that the R2K - having lagged the broader market for most of 2014, broke a new high into year end. R2K in the 1500s remains a very valid target by end 2015, unless there is a very strong inter'4 down wave this late spring/summer. Considering the ECB will be launching their own QE-pomo program for the EU markets in March... any down waves are likely to be very minor. 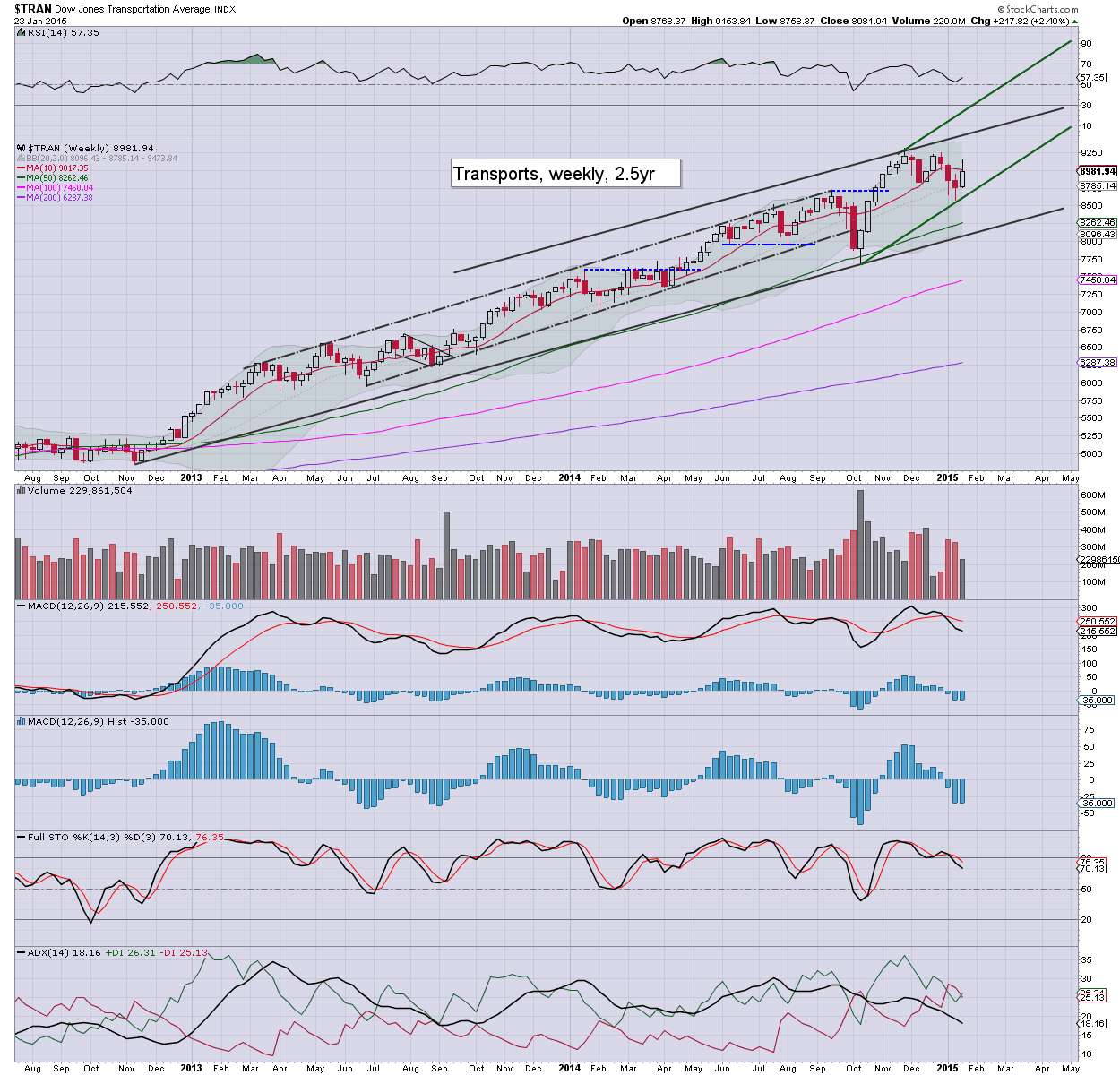 So.. net weekly gains for all the main US indexes, and indeed.. the first weekly gain of the year. Tech' is leading the way, followed by the Trans/R2K.

Taken as a collective, it would seem highly probable that the equity bulls will be able to claw the market higher into end month.. if not also the first half of February. The issue is where will the market next get stuck... sp'2100, 10s, 20s.. or even the 2150s (as offered on the giant monthly cycles)?

Next week is a pretty important one... with the rather important GDP data on Friday. If that comes in higher than 3%, it will again awaken the mainstream that the US economy is still growing. Naturally, the chatter will then turn to when rates will increase. 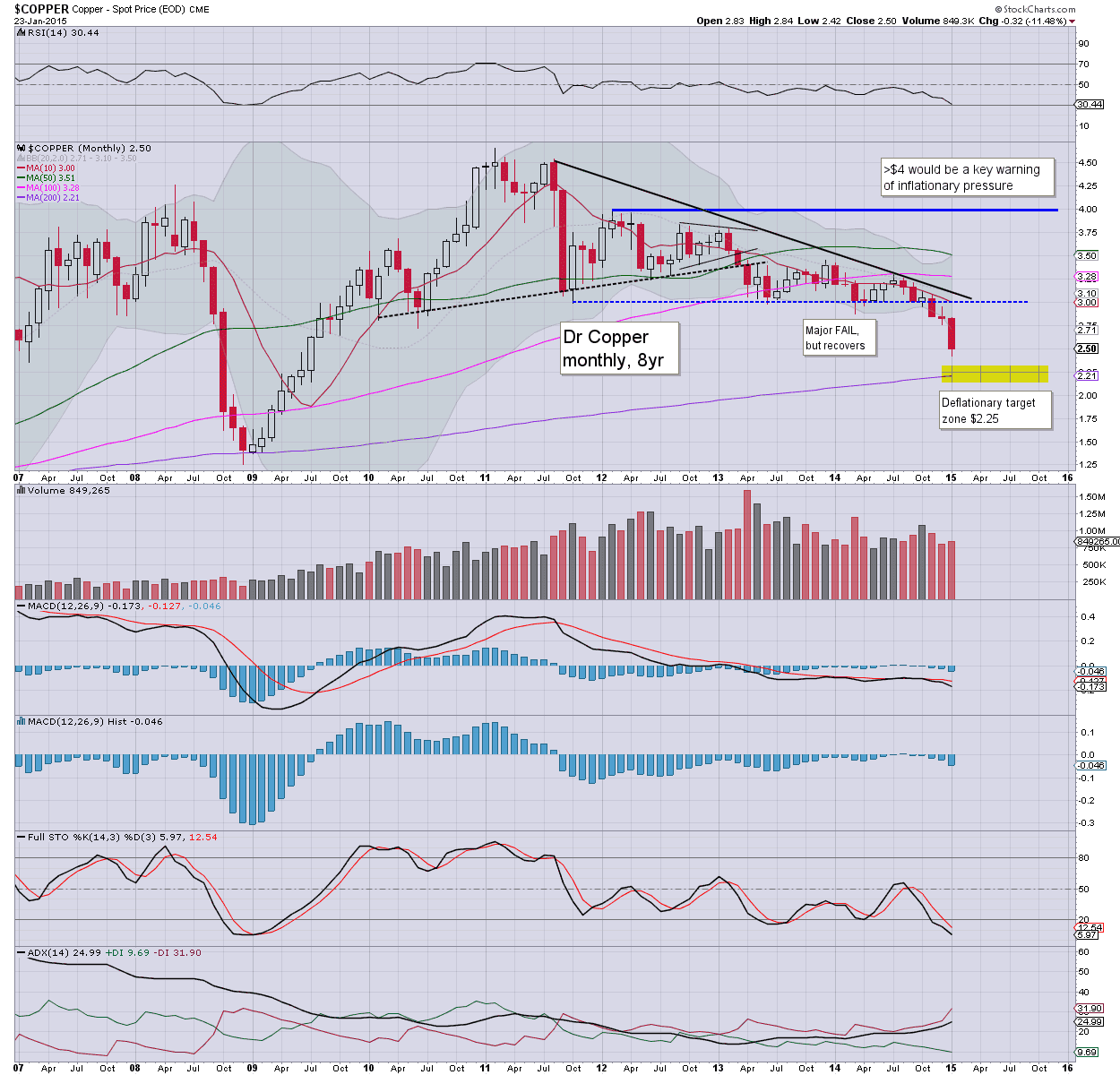 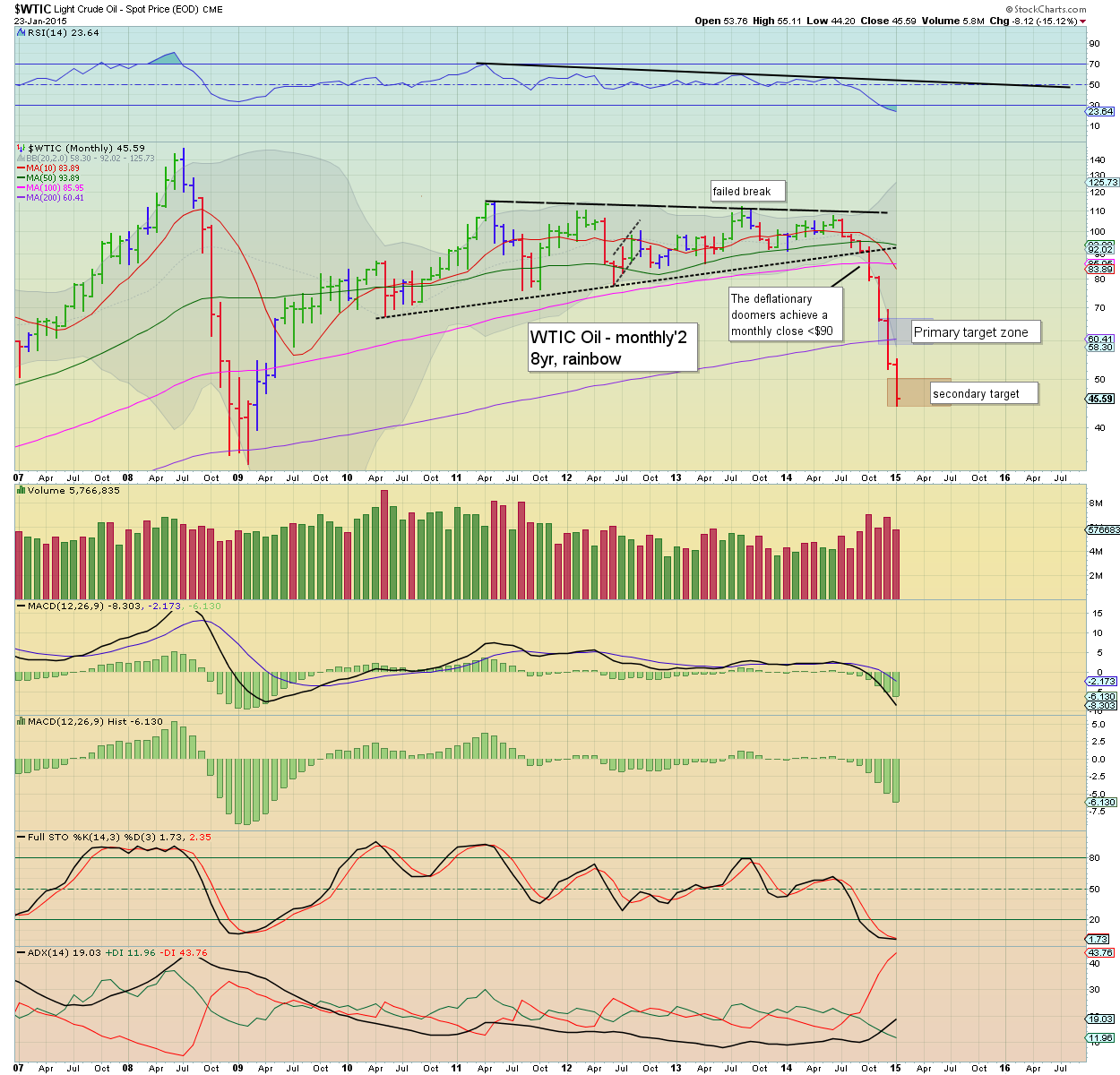 So.. the two big commodities of Copper and Oil both saw very significant net weekly declines.

Seen on the bigger monthly cycles, there is even less of a sign of a turn, although both are close/at downside target zones.

Oil remains problematic in that there is ZERO sign of supply being reduced. Even if OPEC agree on cuts at the next meeting in June, it will take a good few months for that to feed through, although Mr Market would likely react very quickly in terms of beginning a new up wave.

Copper is close to the deflationary downside target, but could easily spend a few months in the low $2s... and might not begin a new up cycle until late summer/early autumn.

Of course, for the oil drillers and miners.. low prices are a bad thing. For the rest of the economy though... lower input/energy prices are obviously good. Transports will benefit from lower fuel costs, whilst tech' will benefit via lower metal prices to make components.

It is of course a complex situation. For instance, even though the miners suffer from lower revenue (whether Gold, Silver, or Copper prices)... they are benefiting from lower fuel/energy costs.

Unlike many - not least those at the central banks, I happen to think lower prices are good for the world economy. It is indeed the case that the 'science of economics' is more a philosophical one... than of actual data.
--

Bonus chart to end the week... 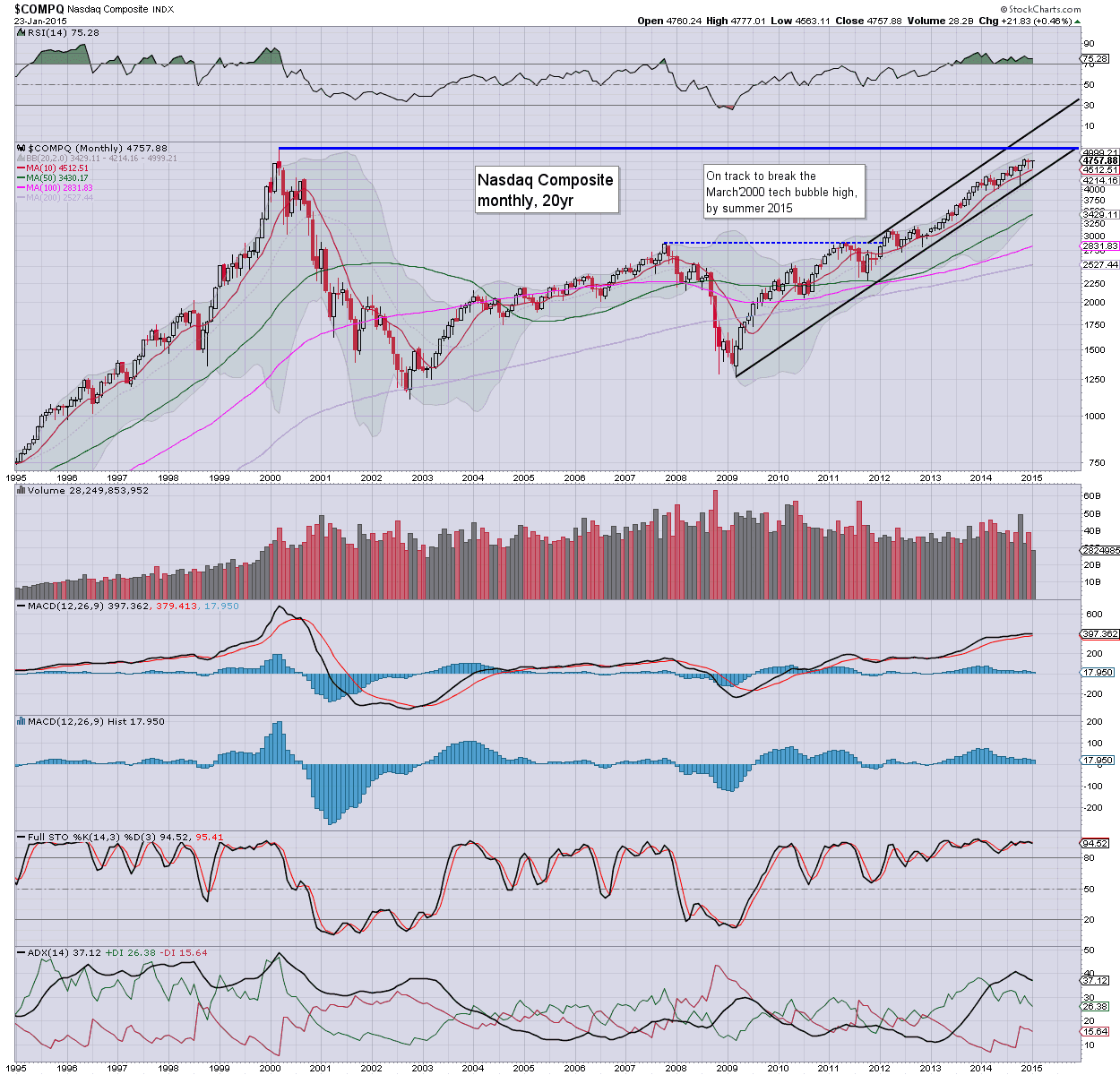 The Nasdaq' is just 375pts away from challenging the March'2000 bubble high of 5132. Considering the ECB are soon to launch their own QE-pomo for the EU markets, I find it hard to imagine that we won't see the tech' in the 5000s before late spring. Any monthly close in the 5200s should (in my view) be seen as hyper-bullish, with a fair target of 7k by spring 2016. 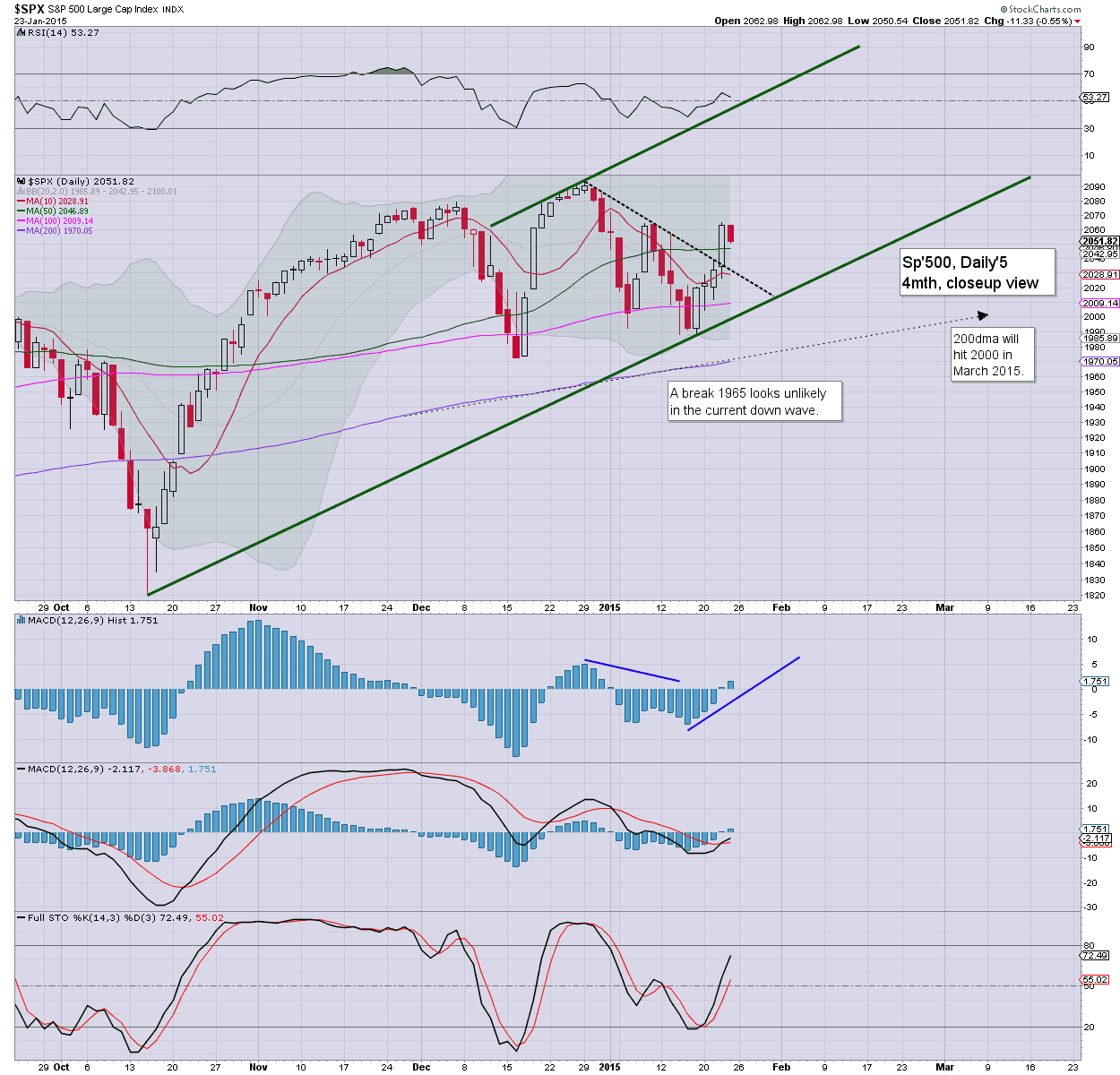 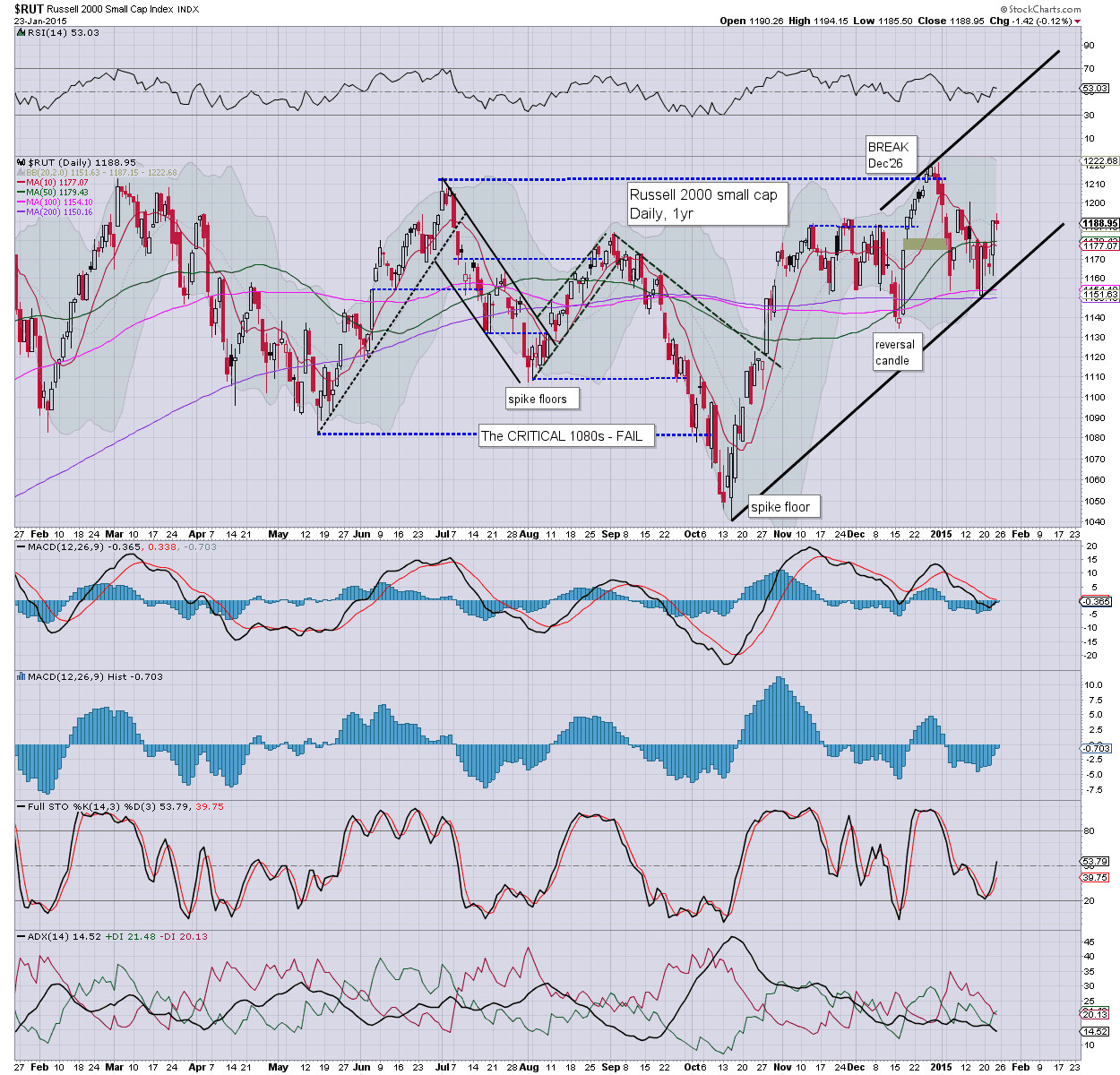 Friday was a mere day of consolidation/minor weak chop... ahead of what will very likely be further gains next week. The sp'2100s most certainly still look due.
--