With equities seeing a touch of weakness into the close, the VIX built some gains, settling +10.4% @ 13.33. Near term outlook is for continued broader equity strength, which should keep the VIX capped firmly in the low/mid teens. 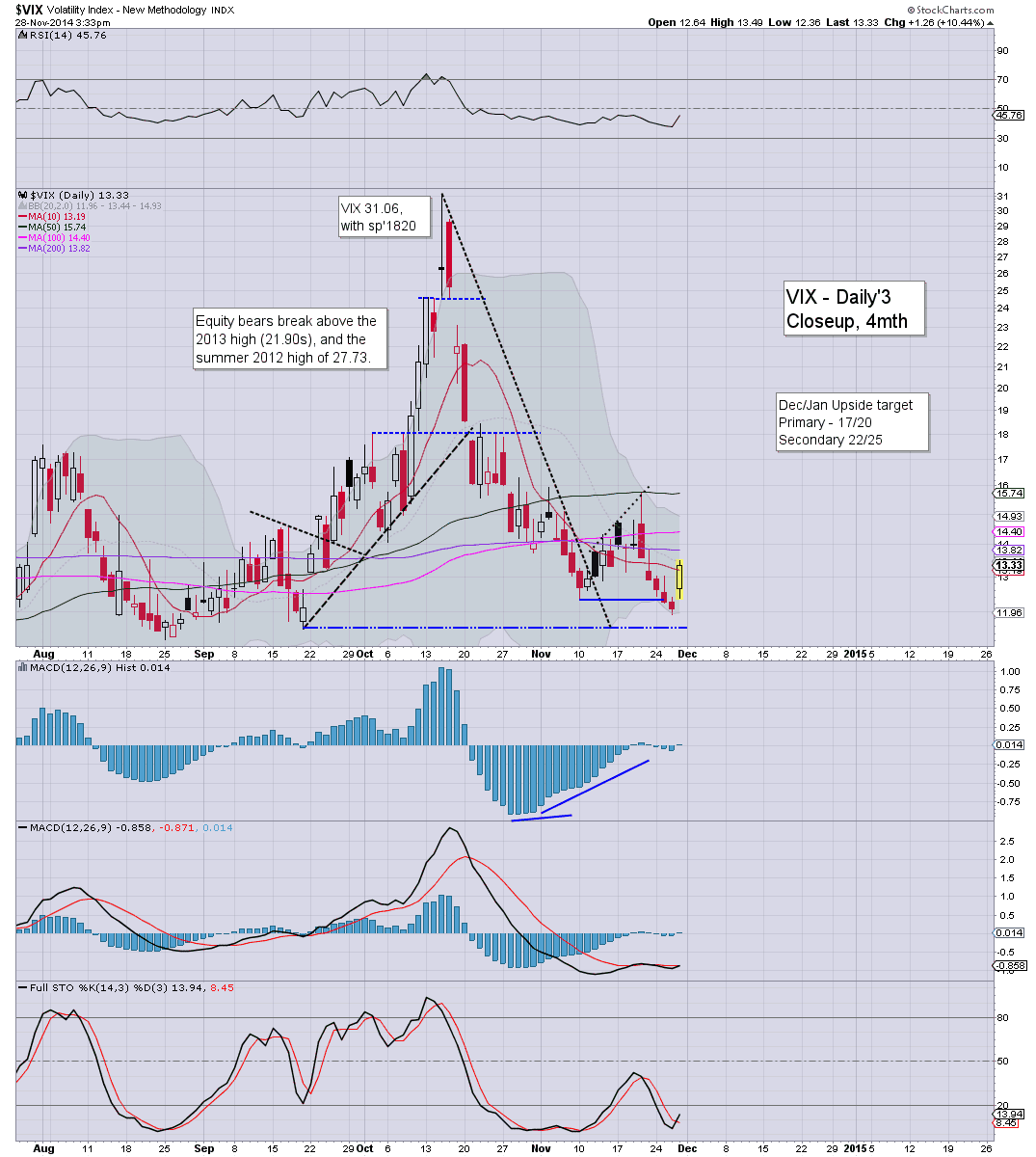 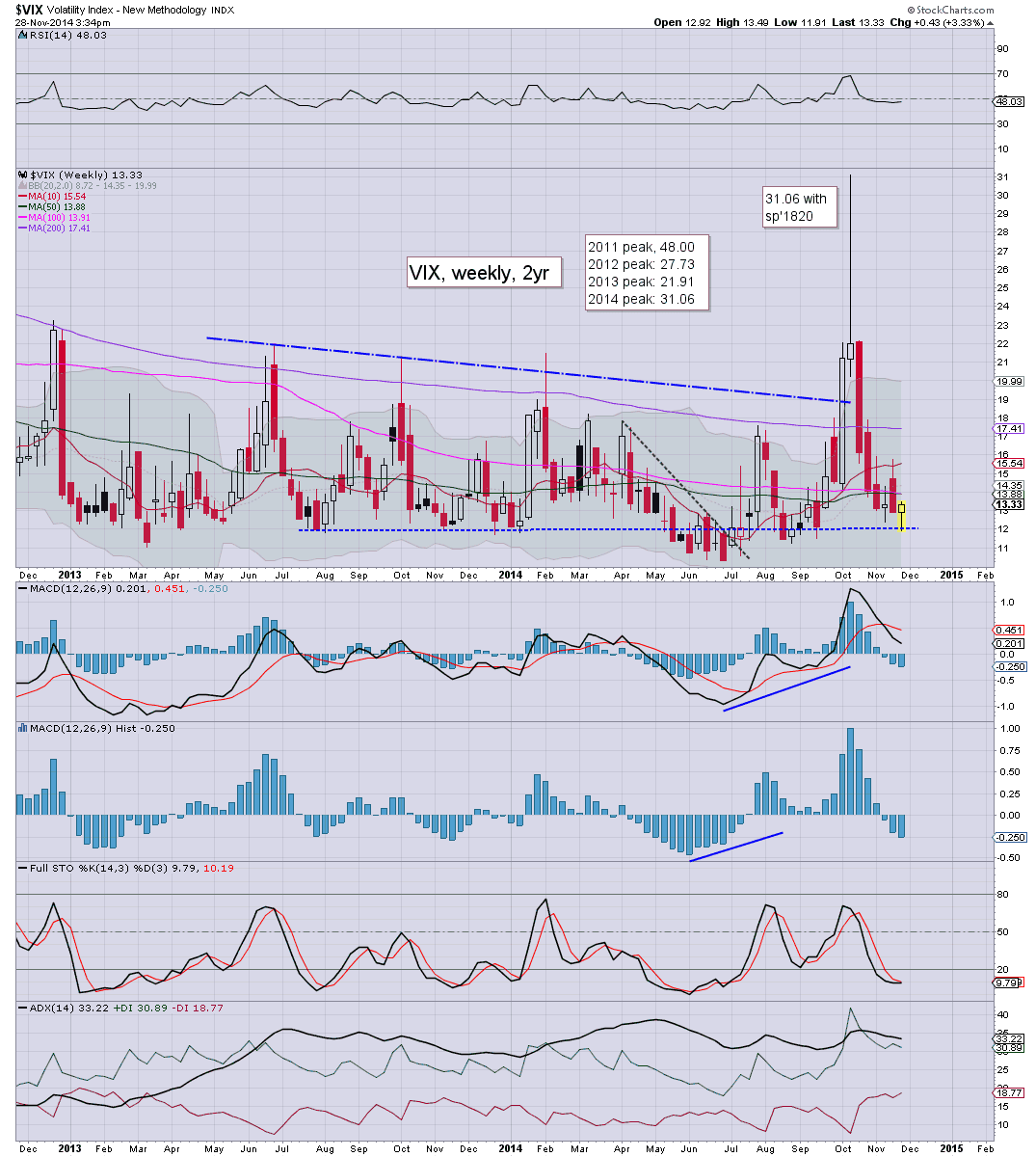 There is not much to be said on the VIX. A brief spike higher is always viable, at best, 18/20 zone.. but even that looks a stretch.

I've ZERO interest in being long VIX until late 2015/early 2016.
--
more later.. on the indexes
Posted by Trading Sunset at 21:00:00
Email ThisBlogThis!Share to TwitterShare to FacebookShare to Pinterest 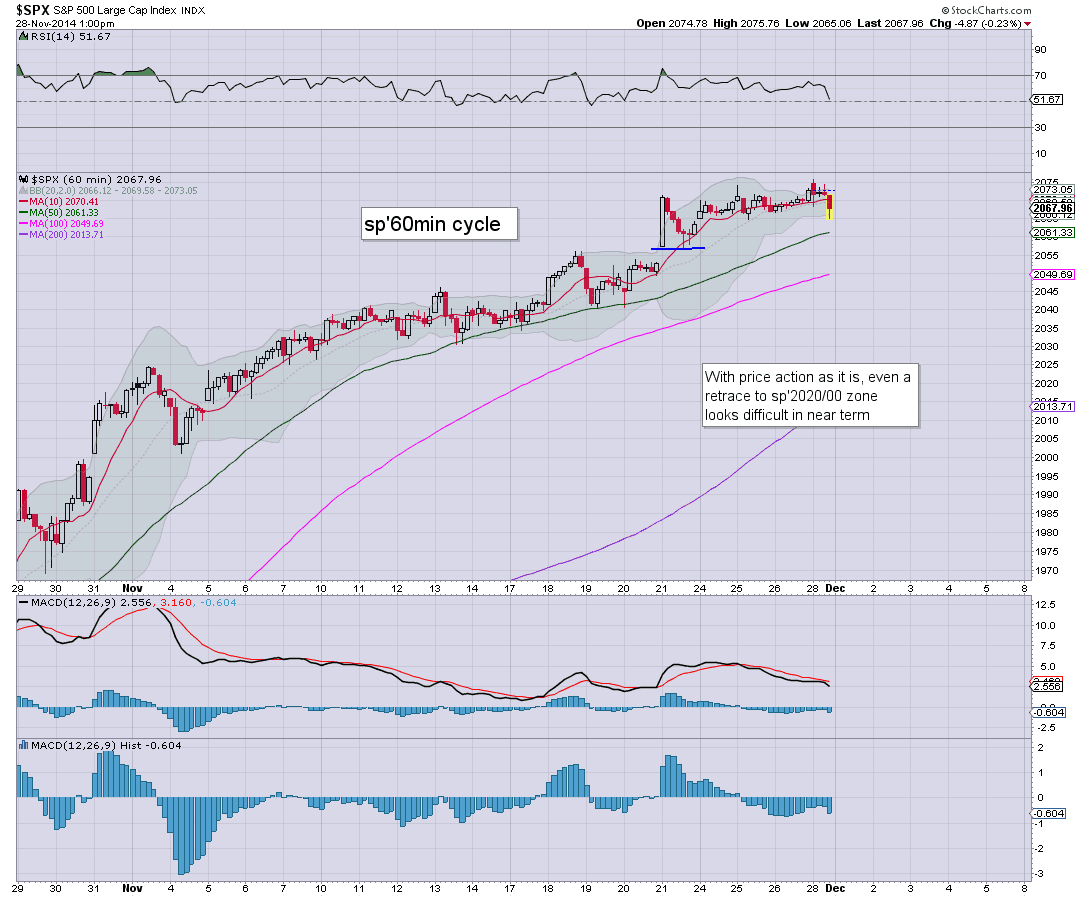 *no doubt, some equity bears will be getting moderately excited with the late morning weakness, but frankly.. its all minor noise.
---

Little to add.... will post a great deal on the metals... and energy.. in later posts.

Have a good weekend!
--
*A full set of updates across the rest of the day.. to wrap up the trading week.
Posted by Trading Sunset at 18:02:00
Email ThisBlogThis!Share to TwitterShare to FacebookShare to Pinterest

US equities remain in micro chop mode, but with the usual underlying upward bias, with notable new historic highs in the sp'500 and Trans. Oil remains in collapse mode.. heading for the target zone of $65/60. Metals are similarly weak, Gold -$17. 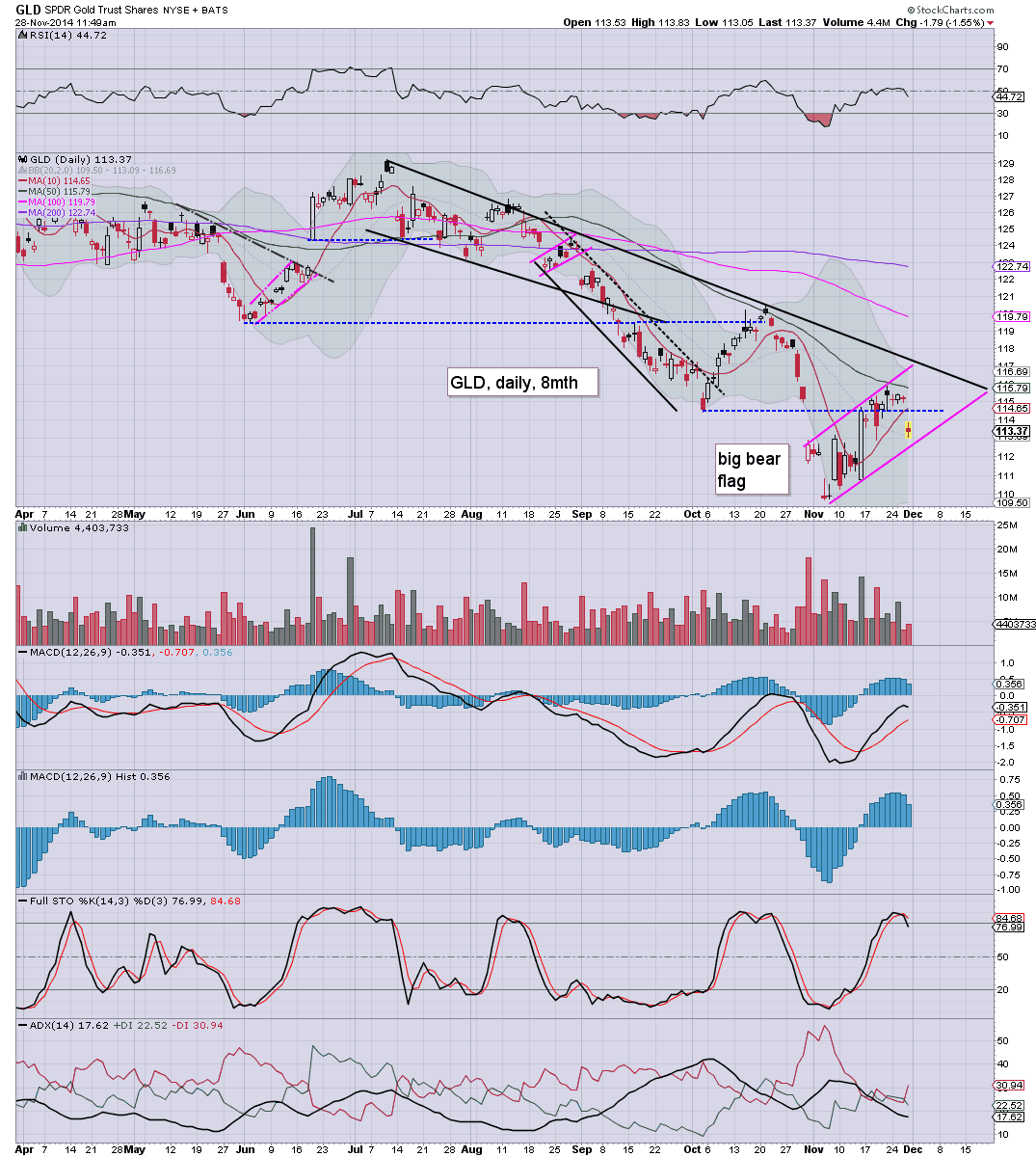 *Sunday night futures could be real interesting for the precious metals. Once the Swiss vote is out of the way, there is zero reason why Gold won't see another severe wave lower... first target is a move to the $1100/1080 zone.
--

There are so many powerful individual stock moves... it is hard to know what to highlight...

I can merely refer anyone to CHK, RIG, SDRL,  FCX

time for lunch... back at the close of 1pm.
Posted by Trading Sunset at 16:51:00
Email ThisBlogThis!Share to TwitterShare to FacebookShare to Pinterest

11am update - forget the market, we got X-wings and the Falcon

Whilst the broader equity market sees micro chop into the early 1pm close.. far more important developments have occurred. We have a teaser for Star Wars ep'7. Who needs ETFs, when we have X-wings, Tie-fighters, or the gods damn Millennium Falcon?

--
*there is actually also a fan made trailer doing the rounds today. Its rather good, but entirely fake, see HERE
--

Gold bugs are getting a little taste of what Sunday night futures will probably bring.
-

Posted by Trading Sunset at 15:50:00
Email ThisBlogThis!Share to TwitterShare to FacebookShare to Pinterest

US equities open exceptionally mixed, although with a notable new historic high in the Transports. Energy stocks are crushed with severe falls of 6-8% common, whilst miners are weak as the metals are sharply lower, Gold -$17, with the ETF of GDX -5.4%. 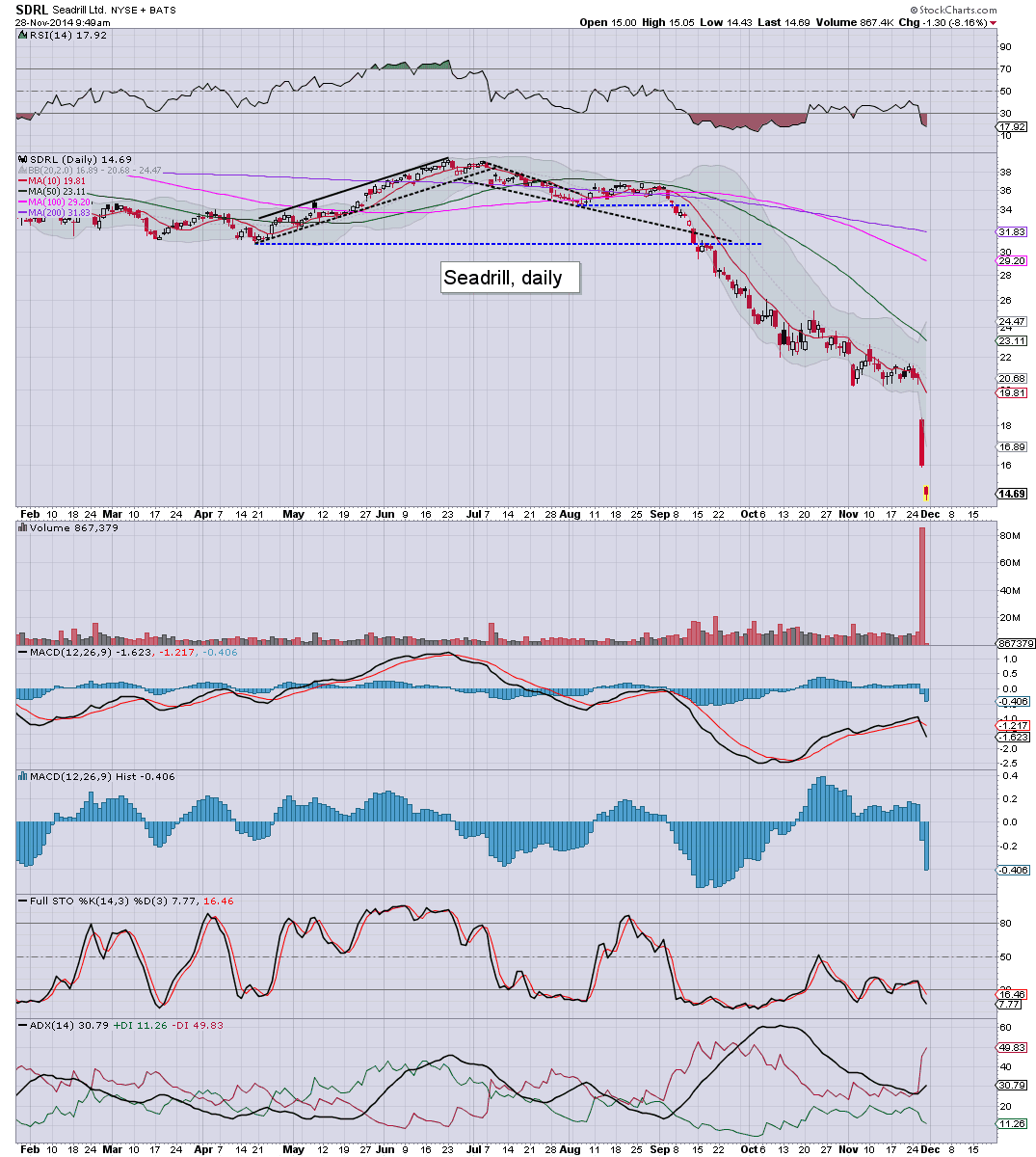 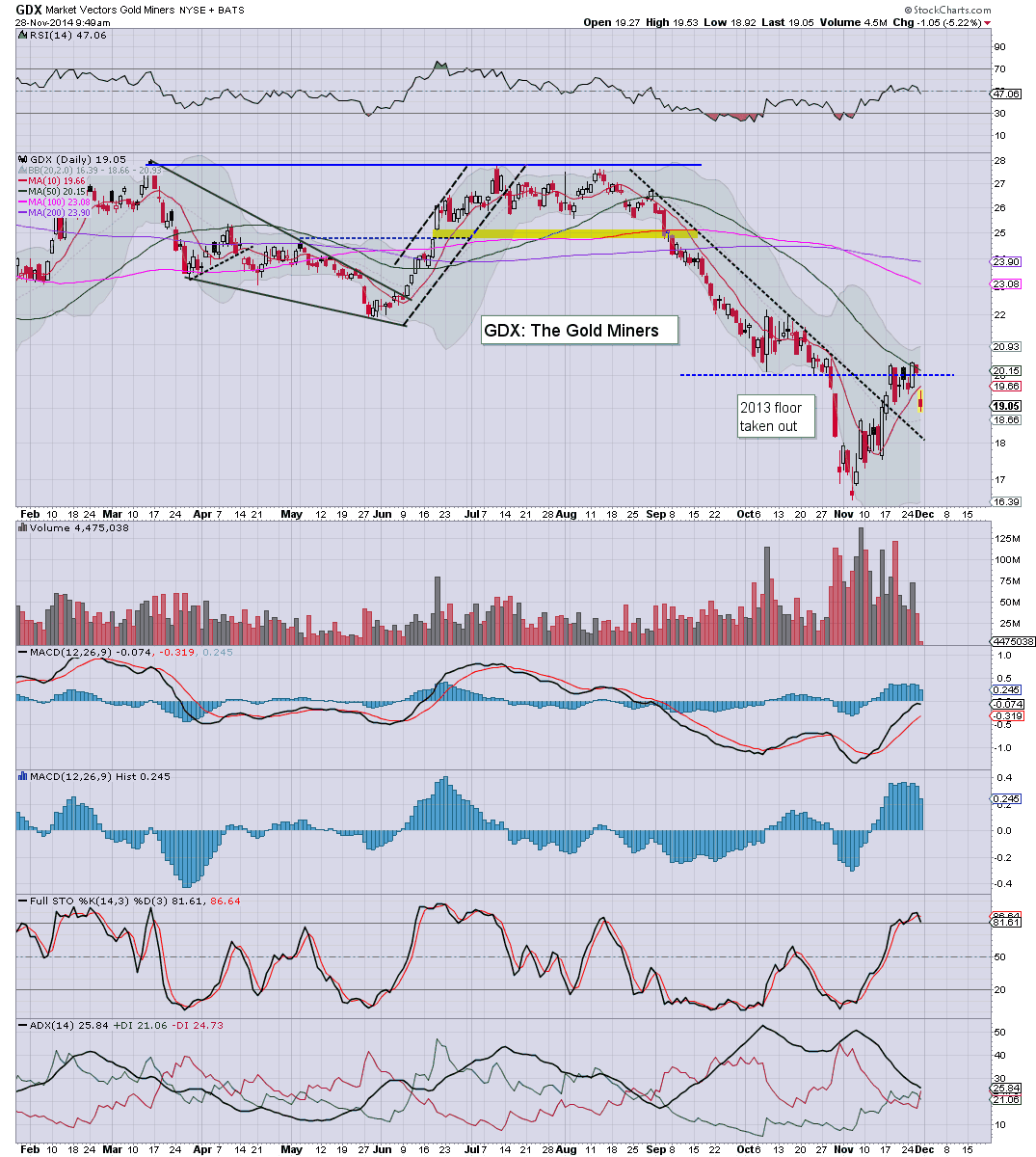 Frankly, I ain't in the best of moods.

It is a vile time of year, as the masses go even more insane than normal (not least with pre Christmas sales).

I'm sick of the gold bugs.
I'm tired of the idiot top callers (yeah.. that includes YOU deflationland)
I'm pissed at the dollar doomers, not least the Schiff, who is now an utter embarrassment, utterly inflexible in his outlook for a full decade.

There just seem so many gods damn idiots out there right now. Everyone is getting more out of touch with reality each month.

Where are the 'balanced' ones?

Ohh, and I can already hear '... ohh, says the guy who is now touting sp'3k'. To hell with all those who don't see what is happening.

All the signs are there.. .ignore them... as you wish.

--
back soon
Posted by Trading Sunset at 14:54:00
Email ThisBlogThis!Share to TwitterShare to FacebookShare to Pinterest 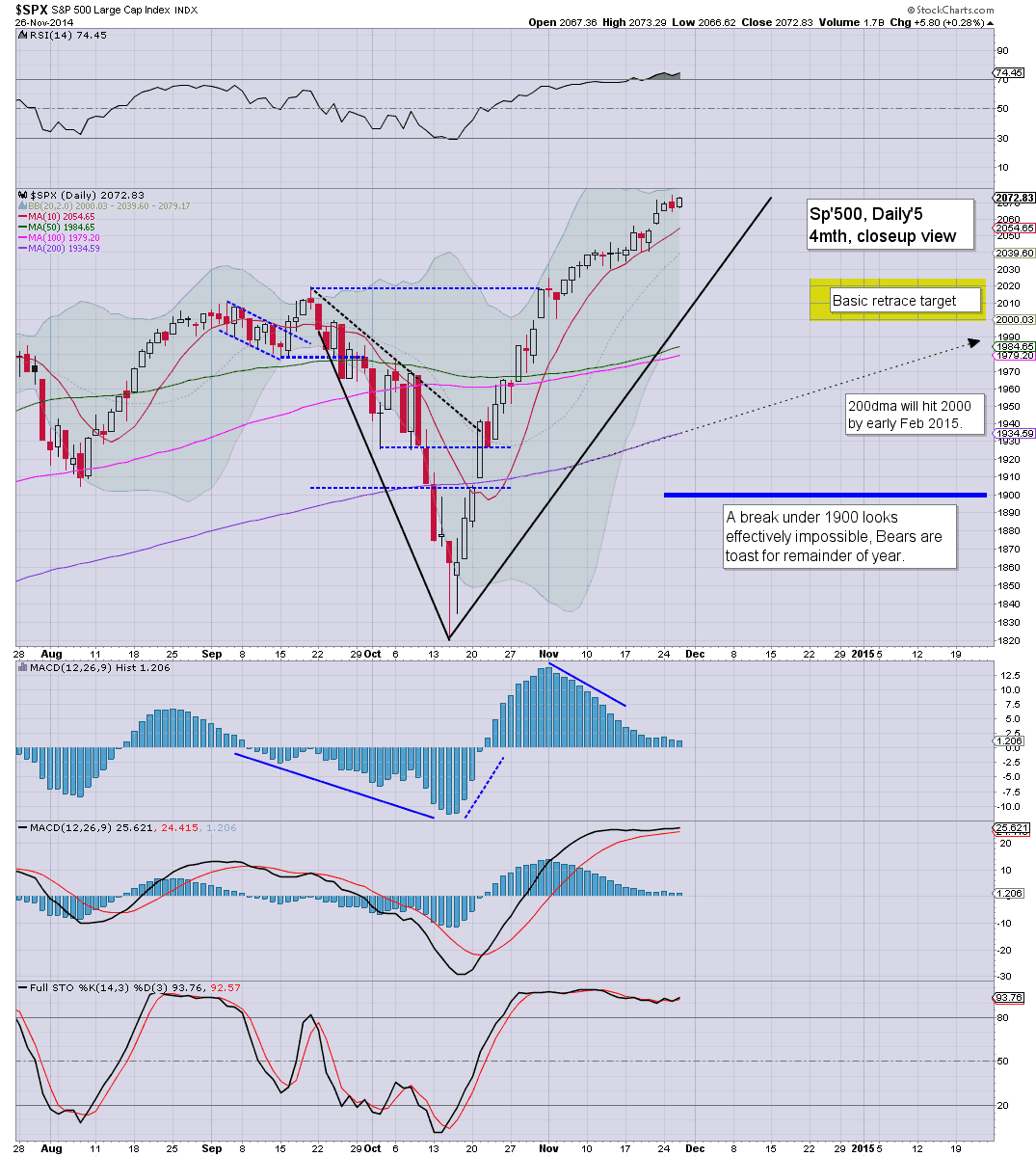 A short trading day ahead.. .we close at 1pm.

With weak metal prices, miners are under pressure...

On the flip side, with Oil prices much lower.. airlines are very strong. DAL and UAL are both higher by around 4.5%.
--

Have a good Friday.
Posted by Trading Sunset at 13:48:00
Email ThisBlogThis!Share to TwitterShare to FacebookShare to Pinterest

Stripped of any trends/channels, support/resistance lines, bear/bull flags... or any of that Fibonacci nonsense, one thing should be clear to anyone since summer 2013 - the old double top of 2000/2007 was decisively broken, and this market ain't likely going under sp'1500...  EVER again. 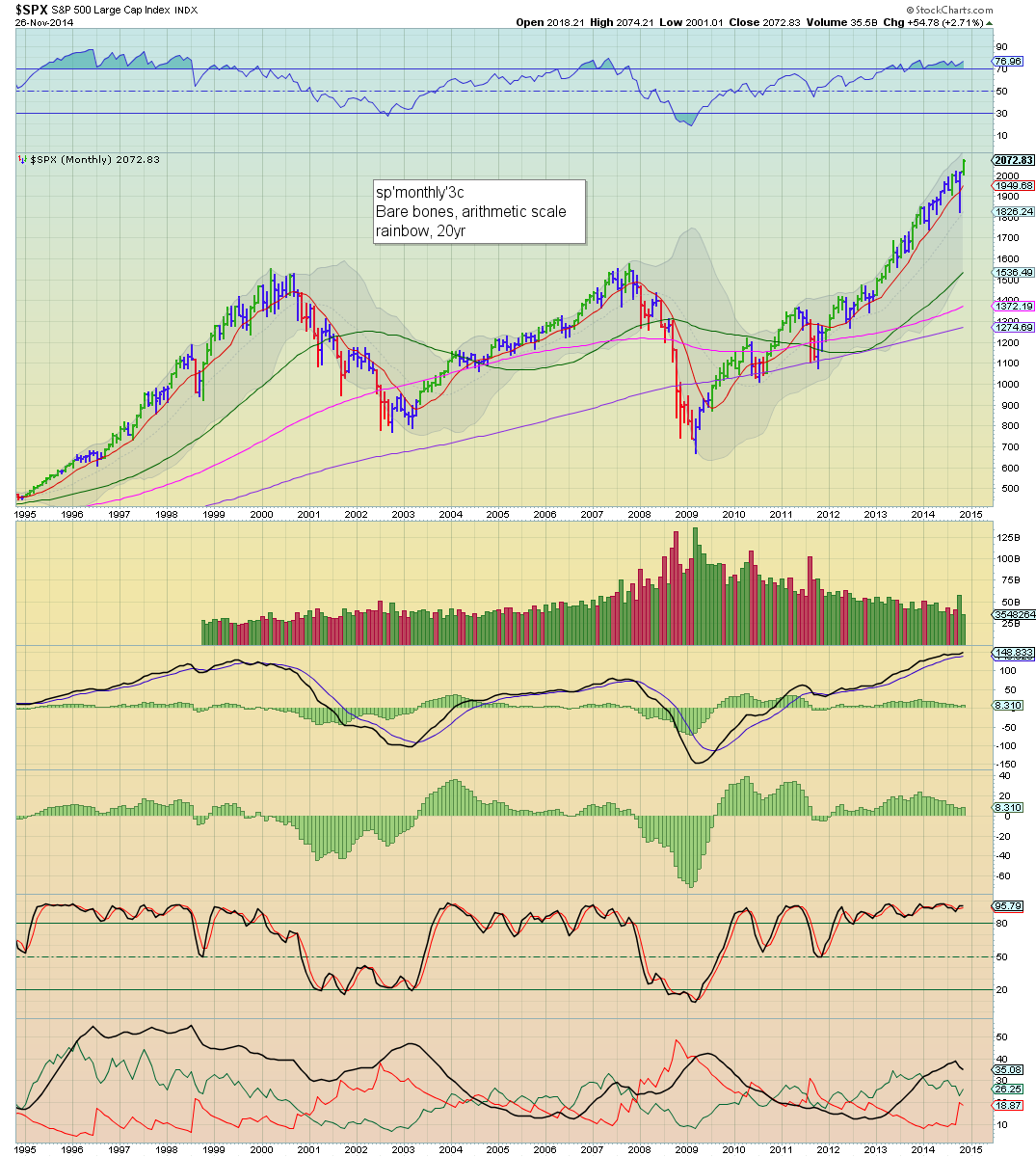 For those few of you out there this evening/early morning, I will no doubt have annoyed some of you with the opening paragraph.

Yet... I did originally state it last summer... after we failed to break back <1500.... which was when I waved a giant white flag, and didn't short the indexes again until this past Sept/early October.

Despite the US fed ending QE... now we have the BoJ picking up the slack, and no doubt the ECB will make a serious attempt to also start buying T-bonds early next summer. Frankly, I see zero reason to attempt any index shorts... nor be long VIX, until late 2015/early 2016... at the earliest.


A reminder on the recent 'crazy fib nonsense'... 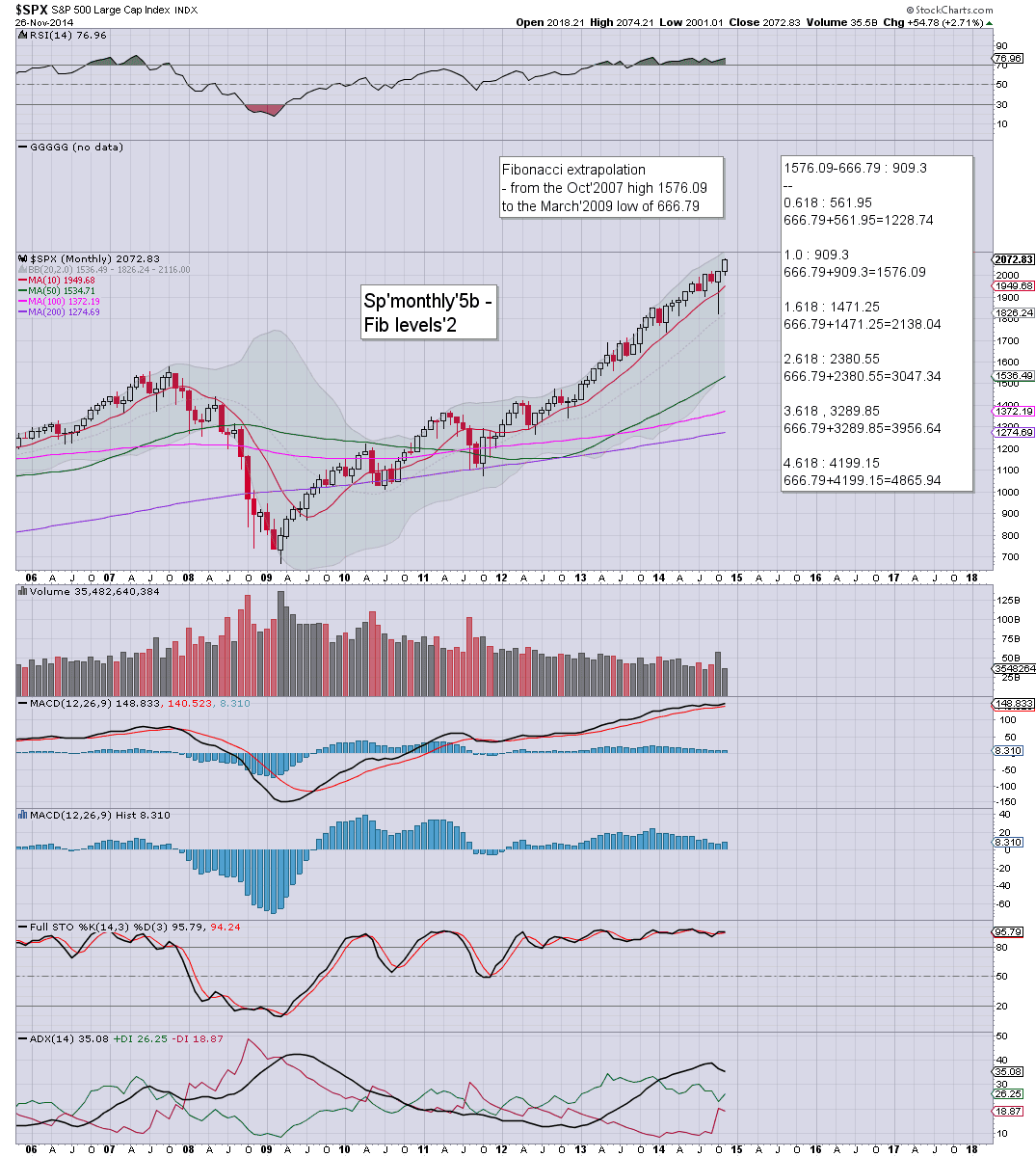 Without restating everything from last Friday's post... the next fib level of sp'2138 is easily within range.. and after that... its arguably 'empty air' to the 3k level. Whether that hits late 2015, or early 2016... I really don't think is the important issue.
--

There is no data of significance due tomorrow.  Market will of course be reacting to the failure of OPEC to cut output... energy stocks will no doubt be under some downward pressure. As ever, I'll be keeping a close eye on the oil/gas drillers of RIG, SDRL, and DO.