With equity indexes closing somewhat mixed, the VIX remained subdued, settling -0.3% @ 13.26 (intra low 12.66). Outlook is for continued equity upside, which should keep the VIX stuck within the 14/10 zone. The big 20 threshold looks out of range until mid May.. at the earliest. 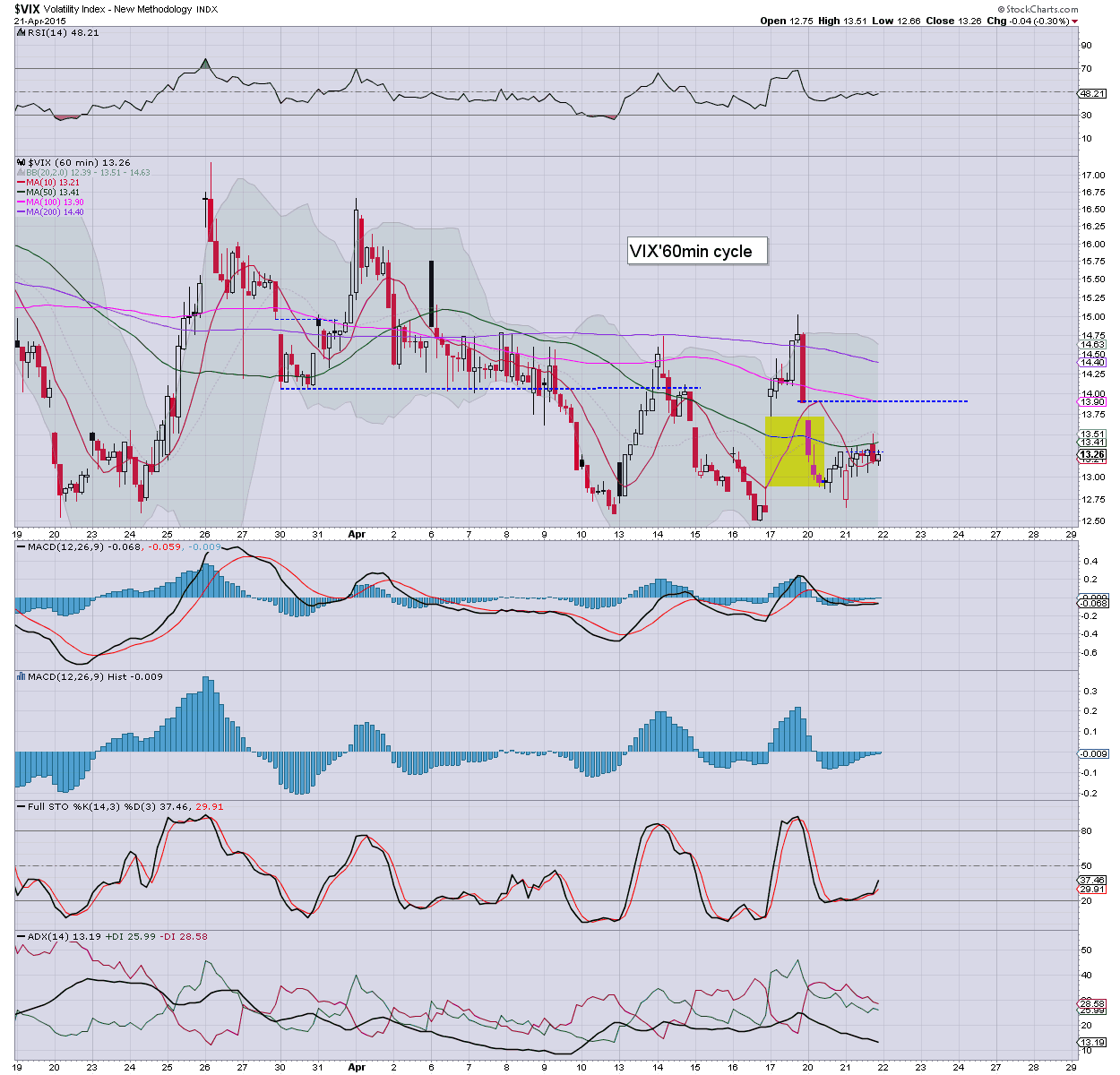 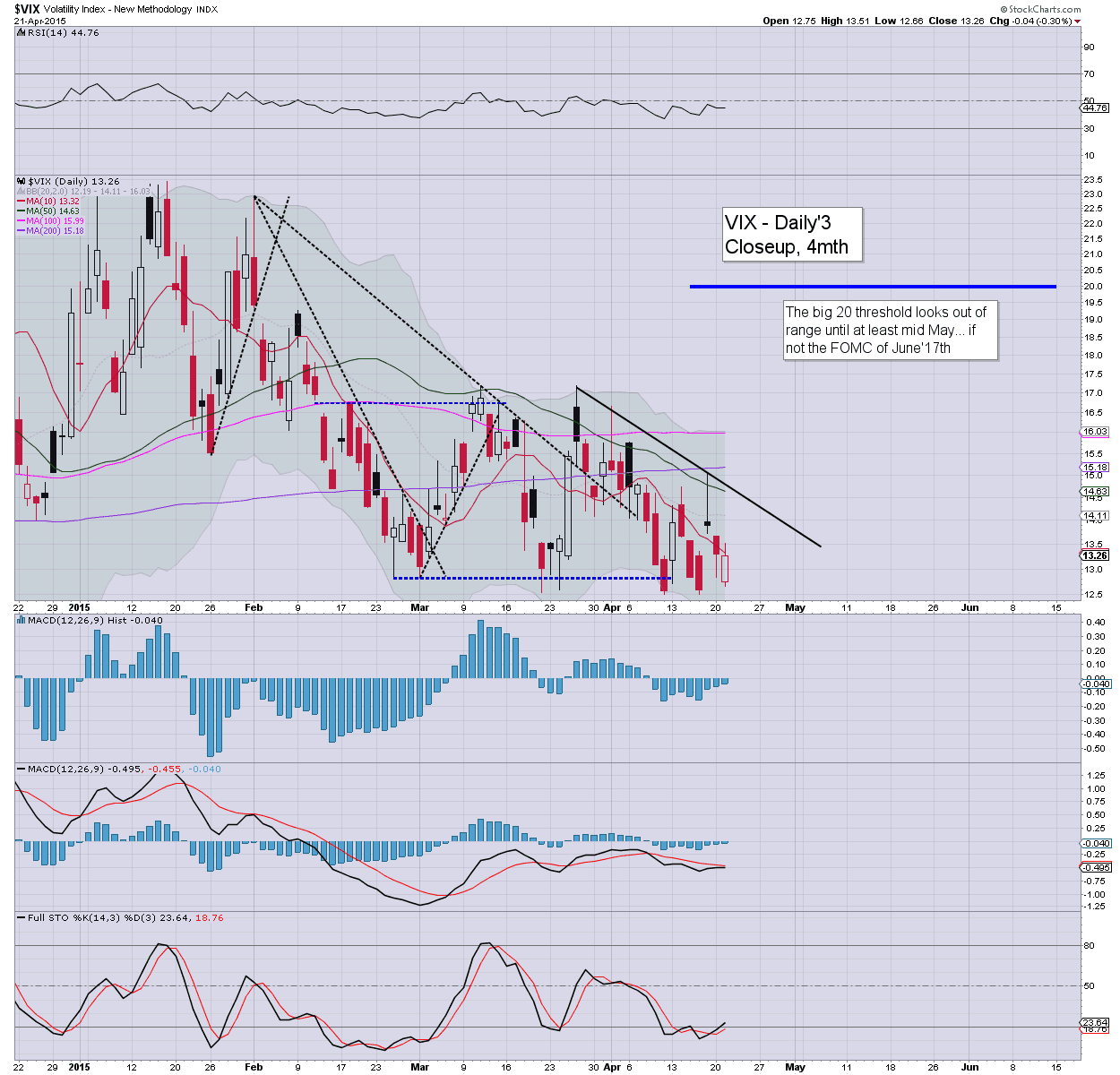 *daily closing candle was a reversal. The most recent one was in late December, which appeared a few days before a sig' up wave in the VIX.
--

VIX remains very subdued, as the US.. and most world capital markets have little concern about anything, including the possibility of a GREXIT.
--

US equity indexes closed somewhat mixed, sp -3pts @ 2097. The two leaders - Trans/R2K, settled +0.2% and -0.1% respectively. Near term outlook is for continued broad upside.. to new historic highs across all indexes. VIX continues to reflect a market that has little concern of anything. 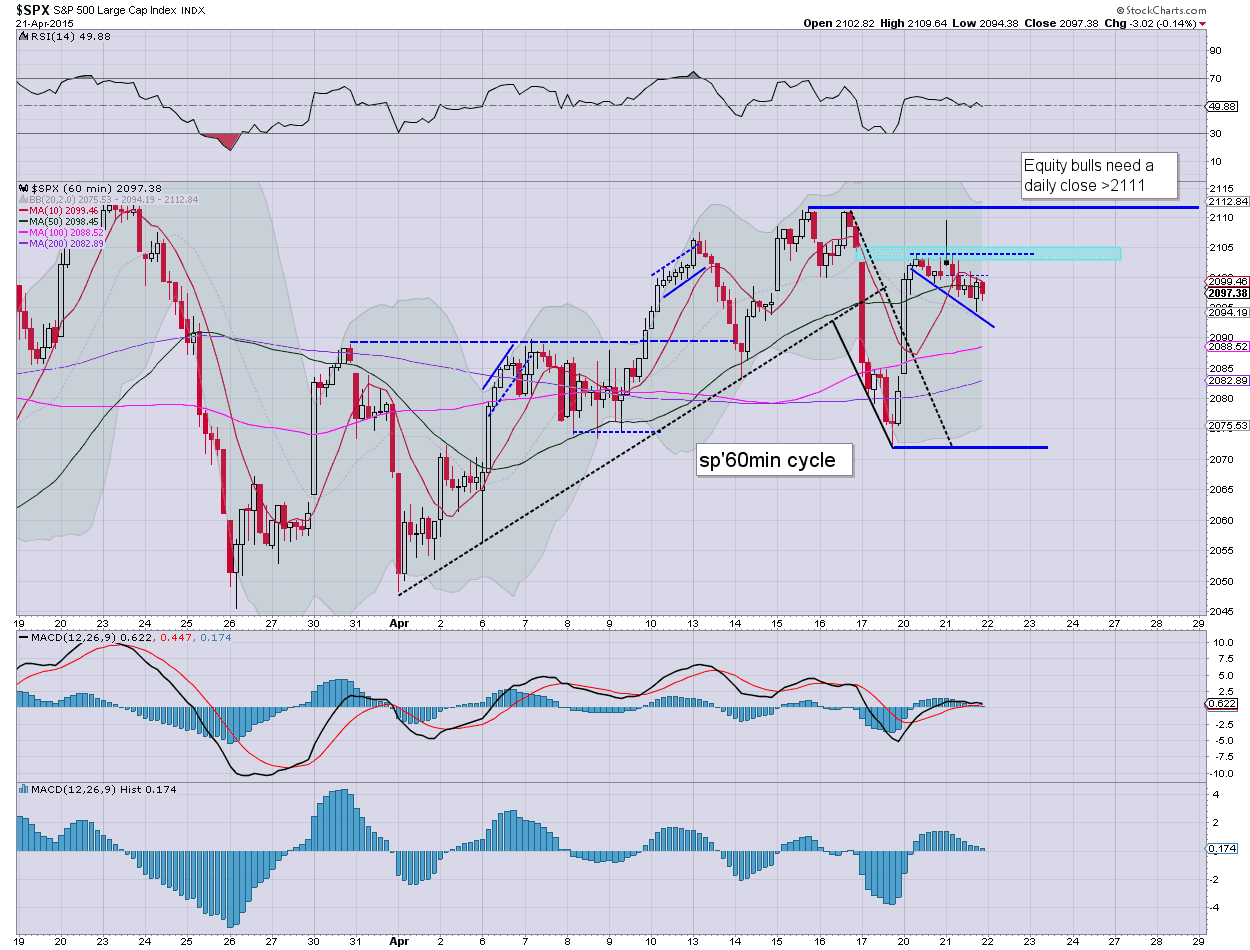 A pretty tedious Tuesday... and I think I'll leave it at that.
--

It has been a rather tedious day of minor chop. The smaller 15/60min cycles are offering slight upside into the close... a net daily gain some indexes seems probable.. certainly for the Nasdaq. Oil remains significantly lower, -2.3%. Gold is holding moderate gains of $6. 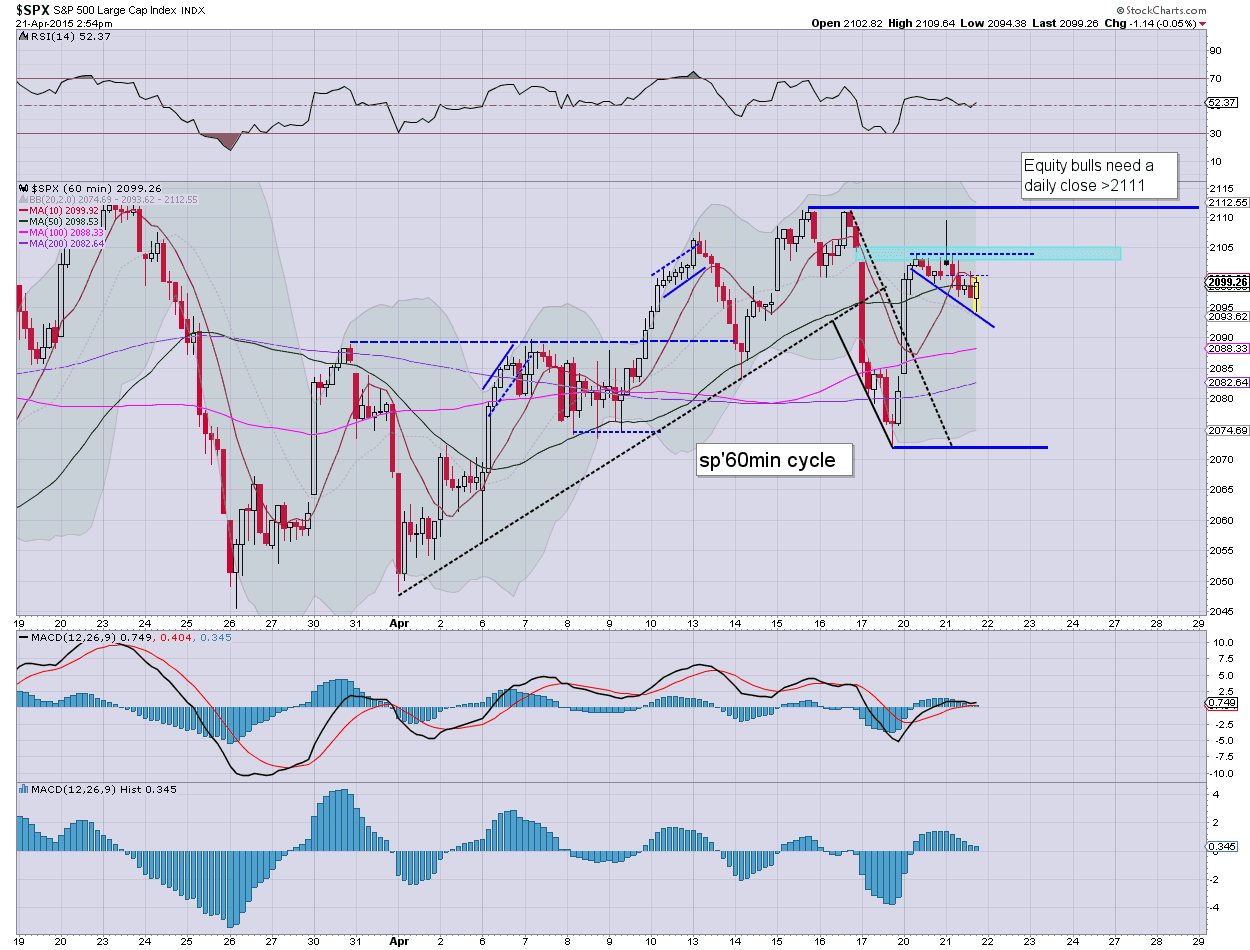 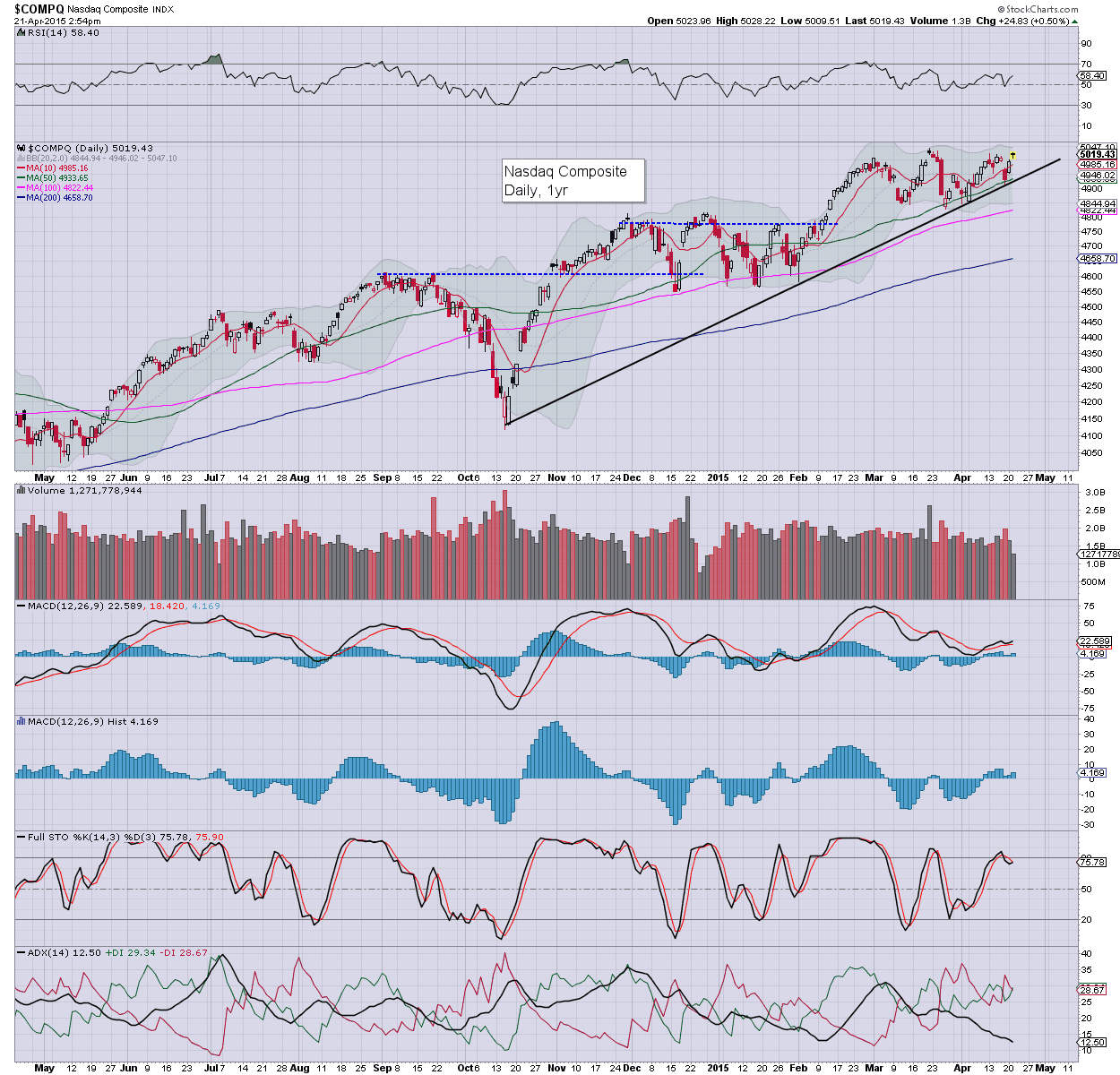 Regardless of the exact close, the equity bulls have managed to hold most of the strong Monday gains. Indeed, Today was arguably one of consolidation.
--

*Oil.. along with most energy stocks should see renewed strength, no later than Thursday.
-

back at the close.
Posted by Trading Sunset at 19:57:00
Email ThisBlogThis!Share to TwitterShare to FacebookShare to Pinterest

Whilst equities continue to see minor weak chop, there are notable significant declines in Oil, -1.7%. Yet.. the broader trend remains strong, with WTIC Oil headed for the $60 threshold by mid May. Metals have built moderate gains, Gold +$7. 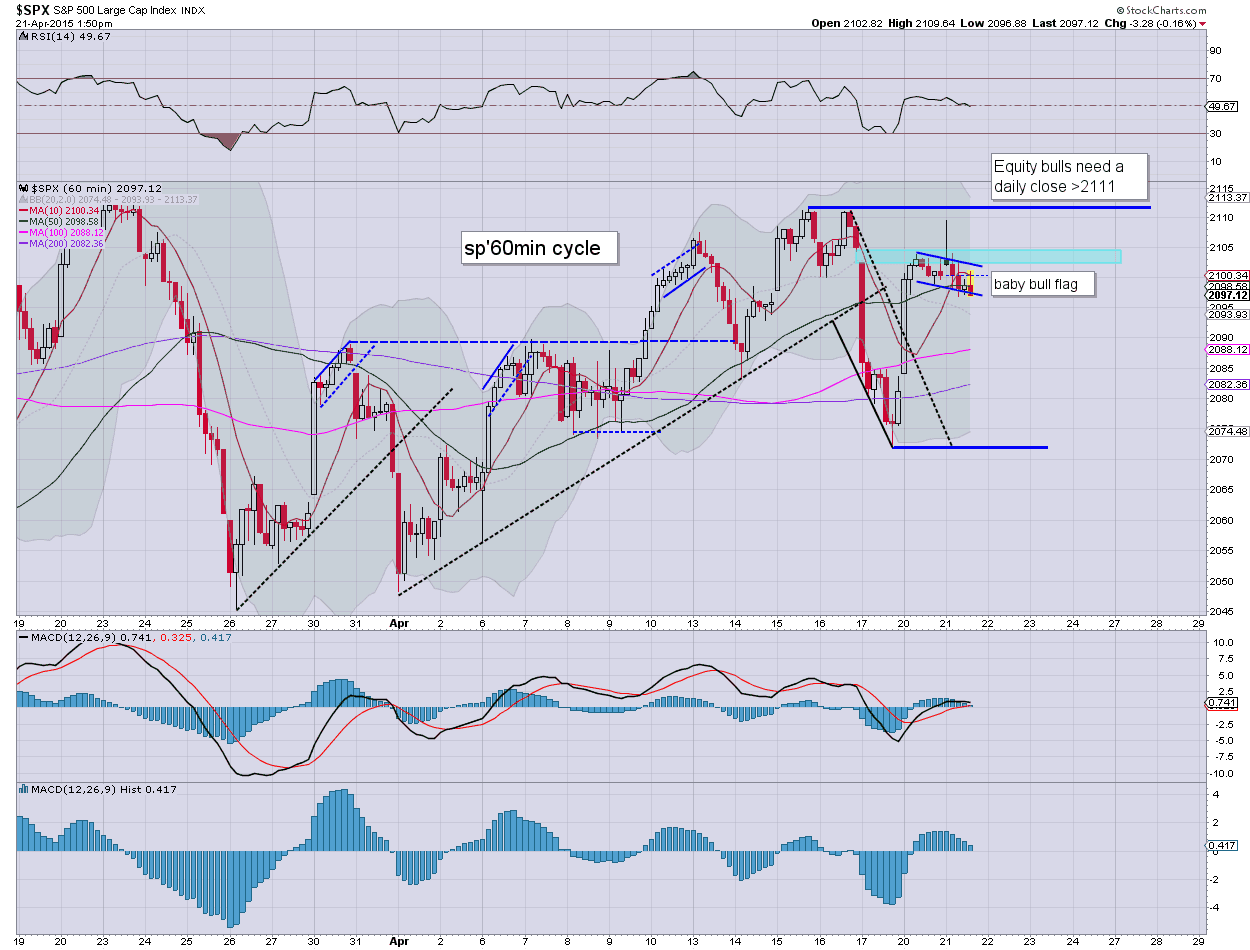 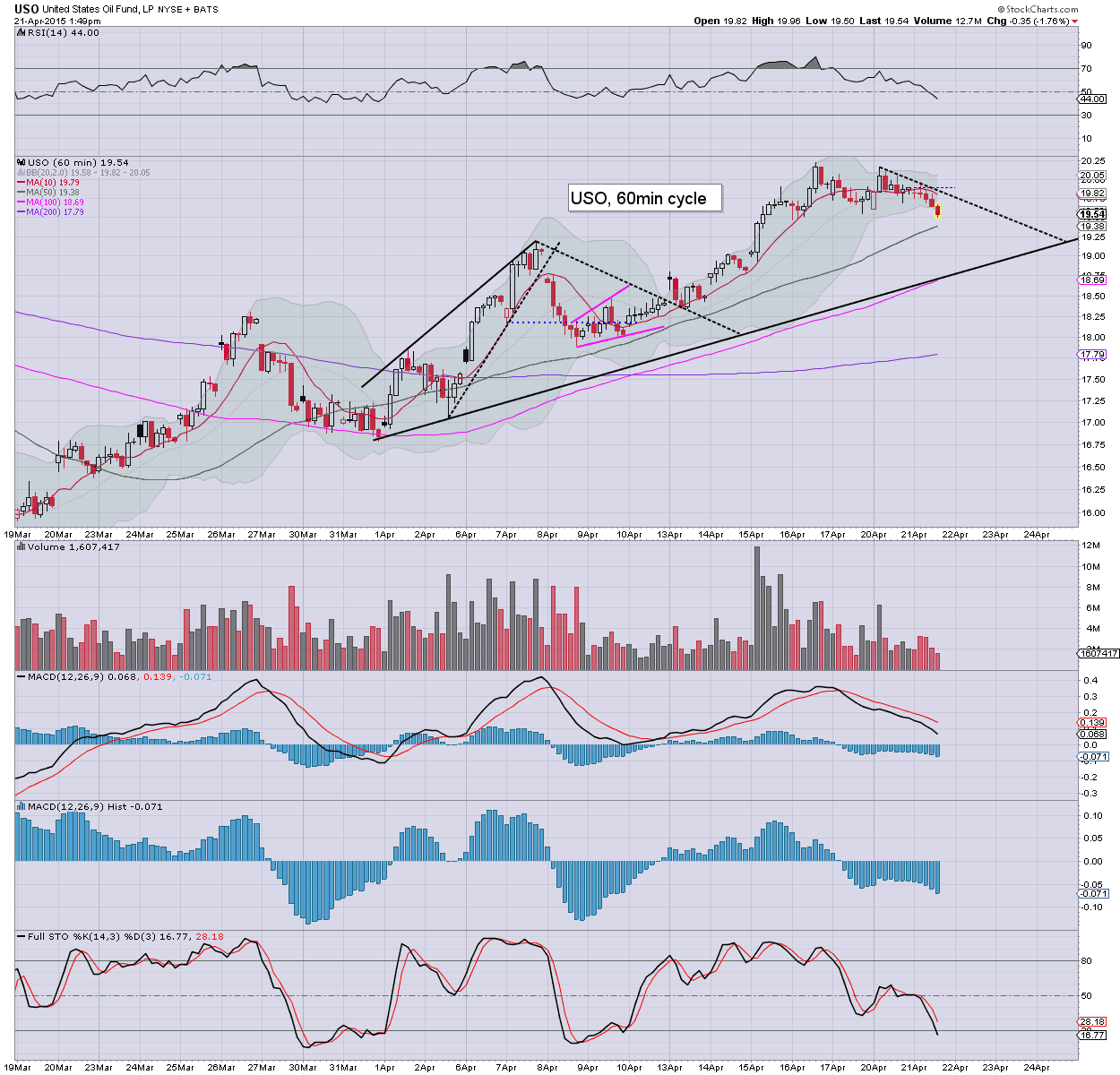 *with the API report after the close... and the EIA report tomorrow (10.30am).. Oil remains vulnerable to further weakness. However.. any such retraces are arguably buying opportunities.
--

Little to add. Equities are in mere Tuesday chop mode. A break above key resistance of sp'2111 looks due before the weekend.

1pm update - chop into the afternoon

US equities remain moderately mixed, with minor declines for the Dow, sp'500, whilst the R2K and the Nasdaq are a little higher. VIX is reflective of a market that has little worry about Greece, or that earnings data are regularly missing in terms of revenue. 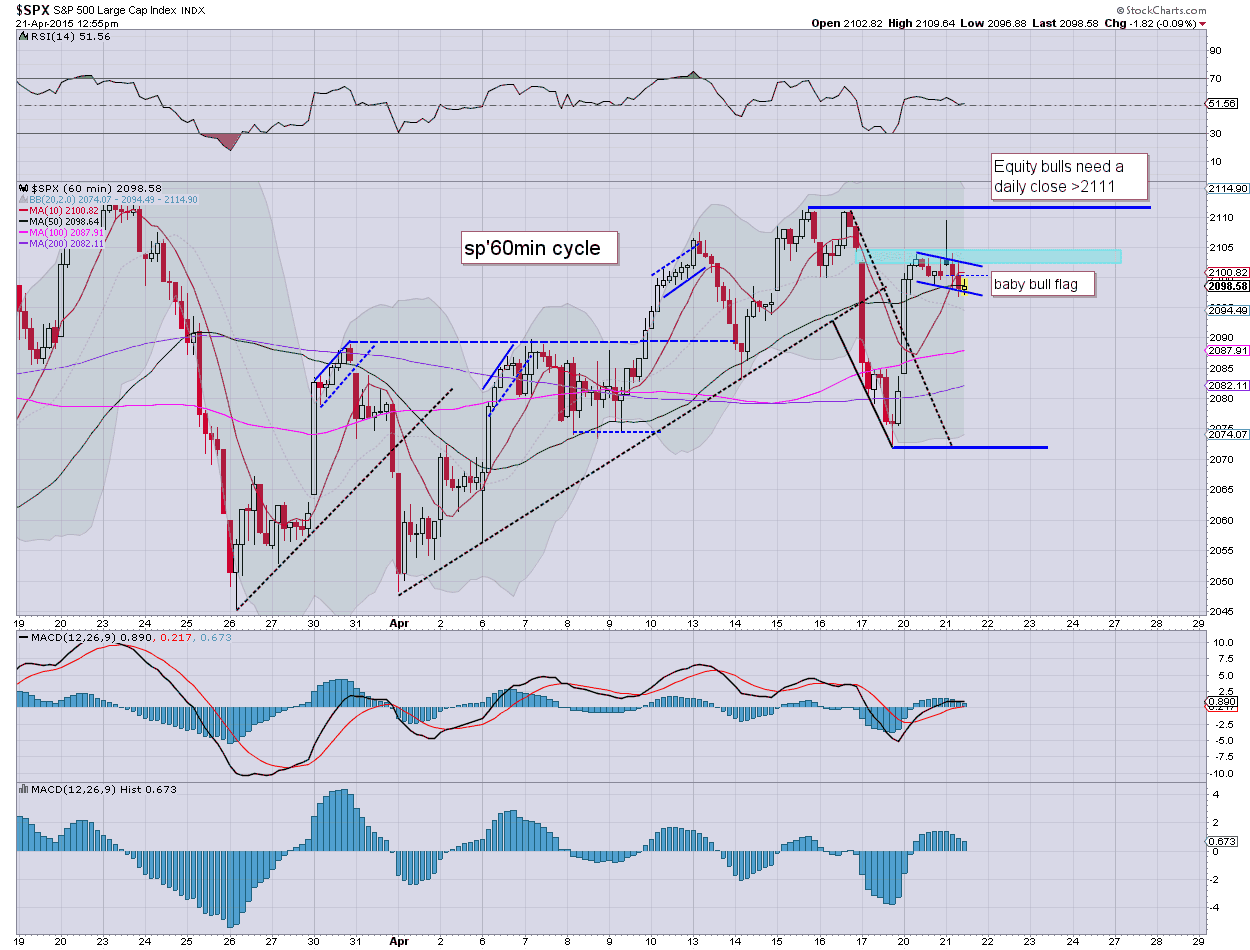 Nothing much to add.

Its turning into a moderately tedious Tuesday of chop... although clearly, there are a fair few individual movers.

Bears look powerless, and a break >sp'2111 still looks due.

Consider this... we're only 1% from breaking a new historic high.. that is easily within range by end week.. and certainly next Thursday (end month). 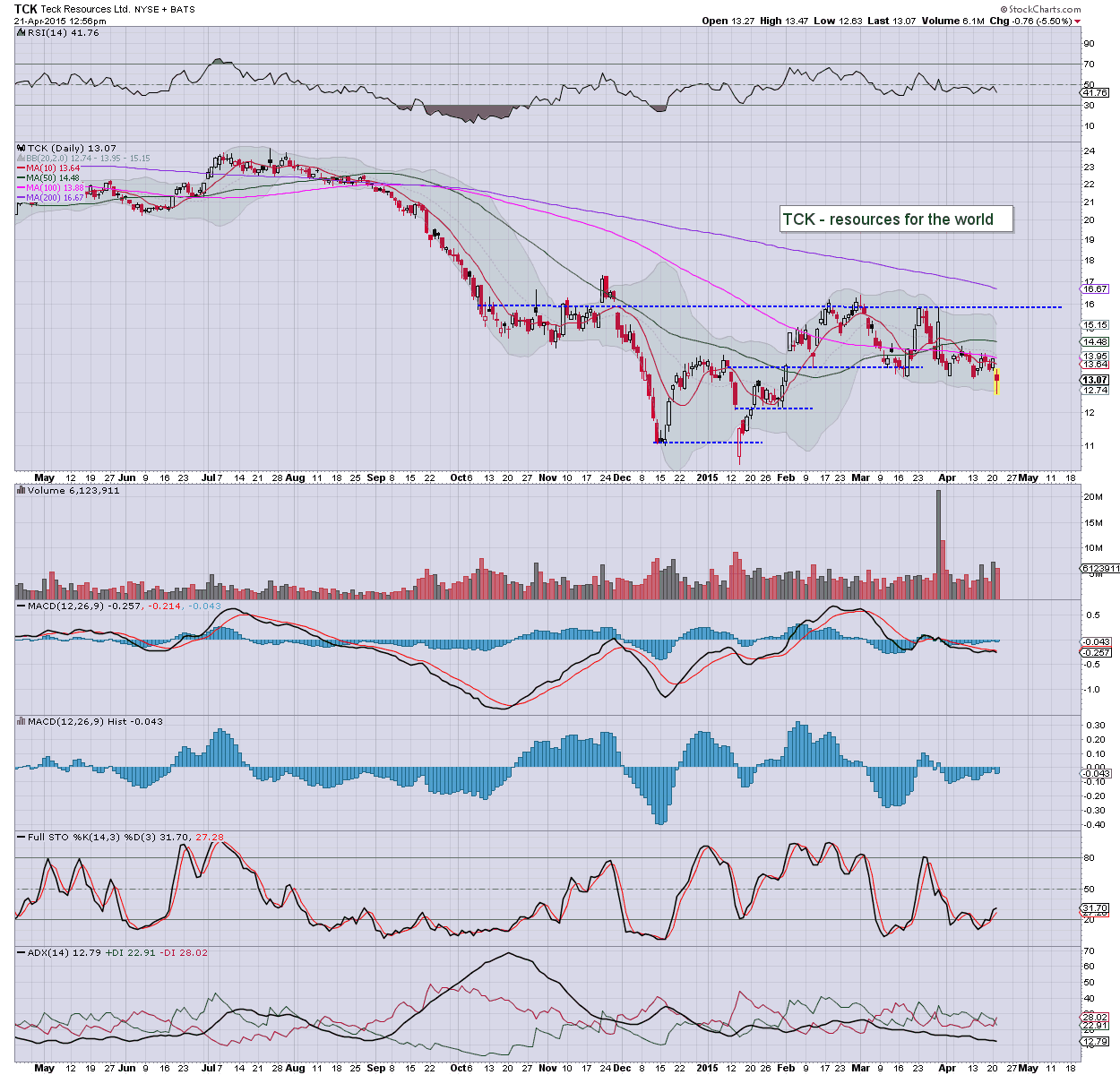 Copper miners having renewed trouble... and if you are also seeking Gold $1000 this summer, then it has to be asked.. what level will Copper be?

*I certainly can't be getting involved in any of the miners until the precious metals see another significant wave lower.
-

stay tuned.. back at 2pm
Posted by Trading Sunset at 17:58:00
Email ThisBlogThis!Share to TwitterShare to FacebookShare to Pinterest

US equities are so far unable to hold above the gap zone of sp'2102/04, with a rather clear opening spiky candle of 2109 on the hourly cycle. However, renewed upside is still expected, wtih a key break above resistance of 2111. There is simply no real downside power. 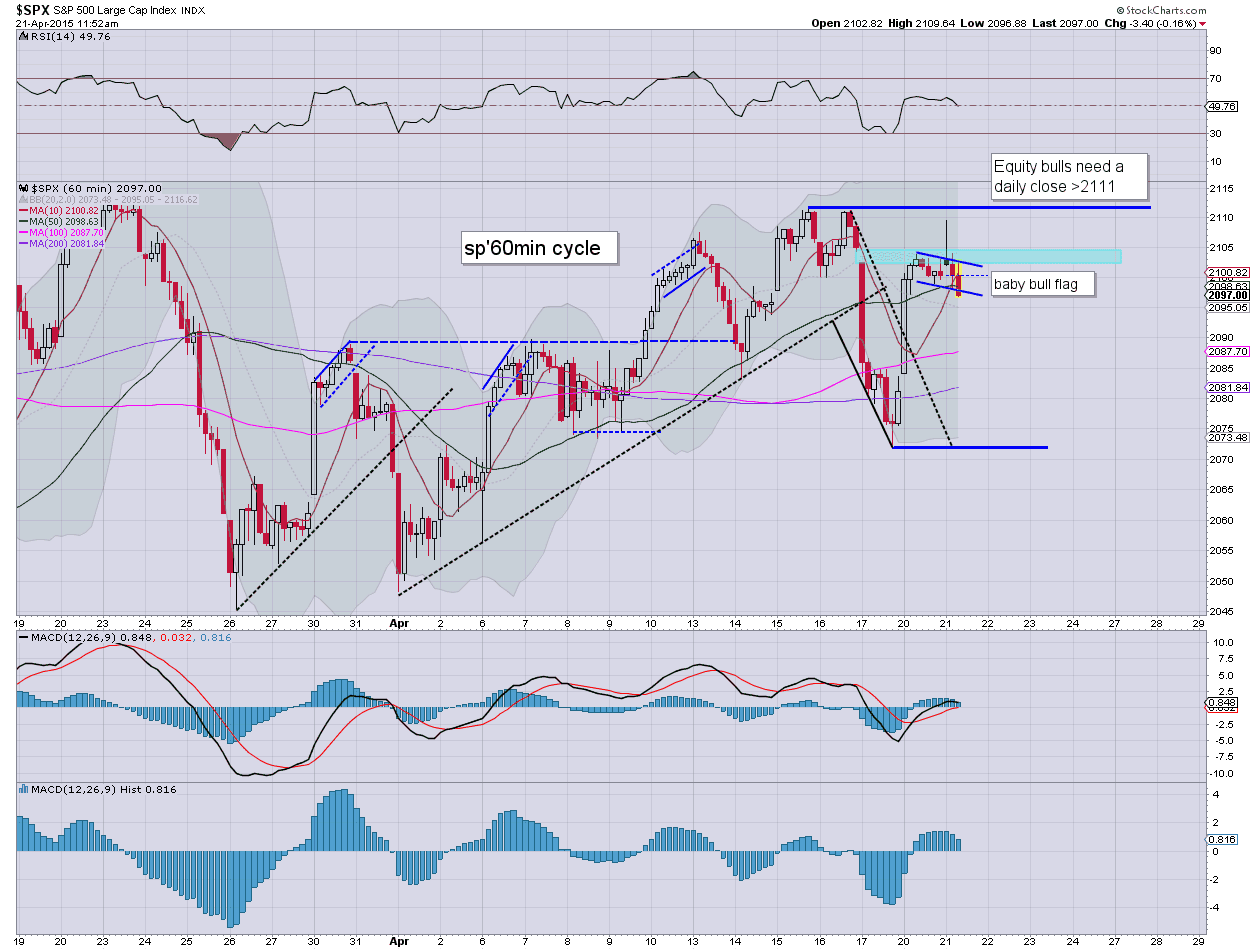 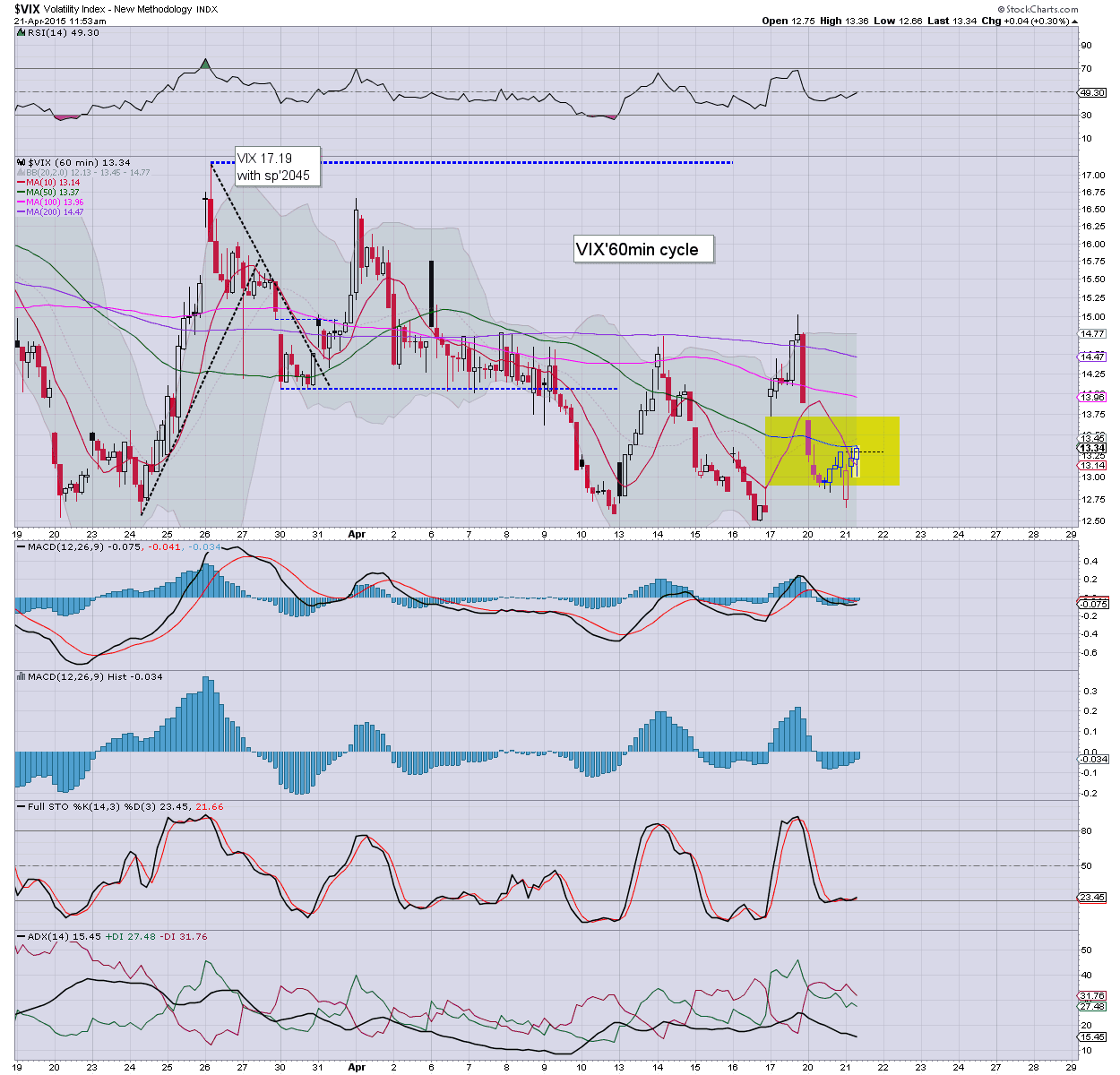 A pretty quiet morning, aside from the individual movers.

notable weakness, oil/gas drillers, RIG/SDRL, both lower by around -4%, but its probably just a minor retrace after the recent very strong gains.


--
time to cook
Posted by Trading Sunset at 16:55:00
Email ThisBlogThis!Share to TwitterShare to FacebookShare to Pinterest

US equities remain moderately mixed, having slipped from an opening high of sp'2109 to 2098. VIX is not showing any concern though, and renewed upside looks due for a second consecutive daily gain. Metals are holding minor gains, Gold +$2.. but set to resume lower this week. 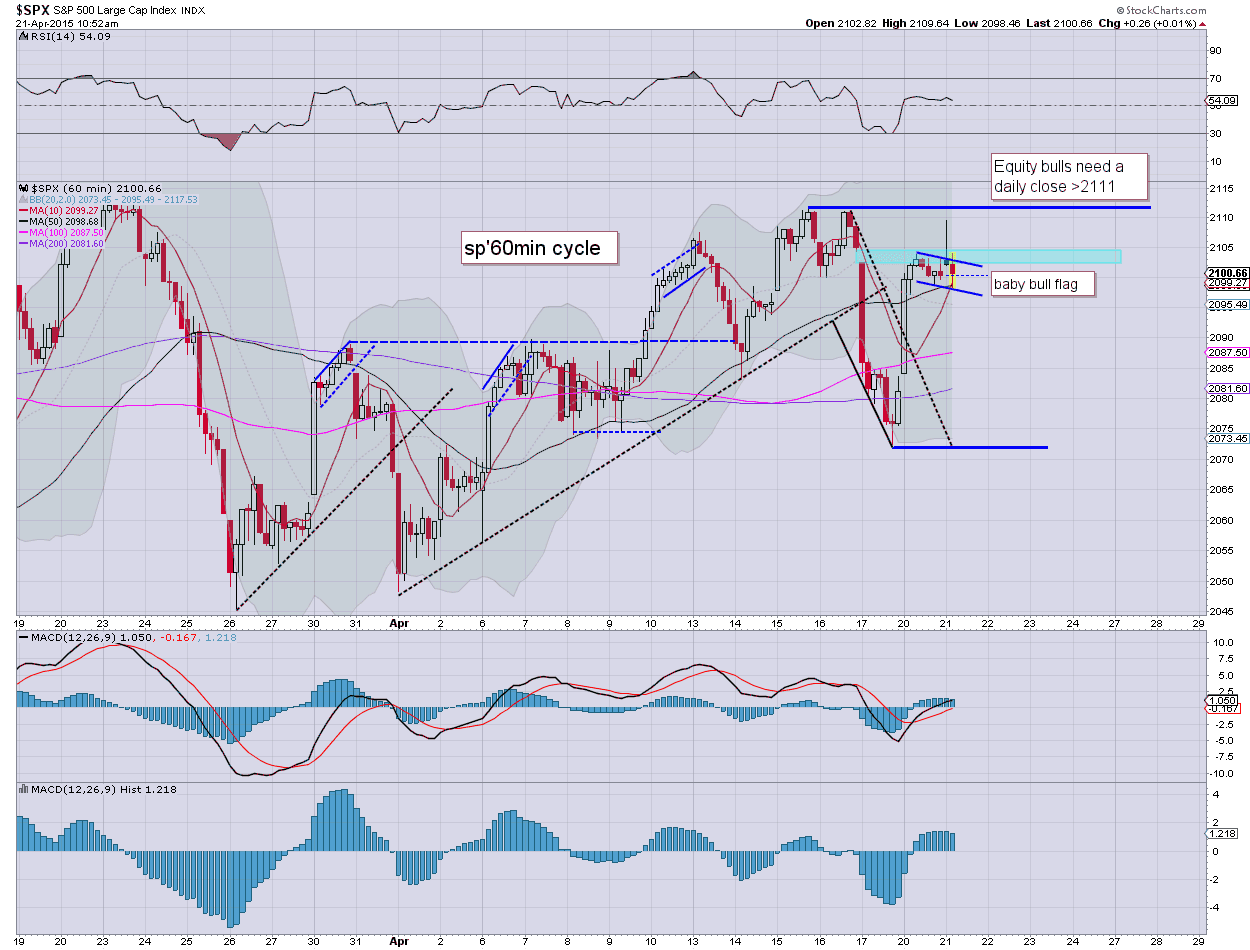 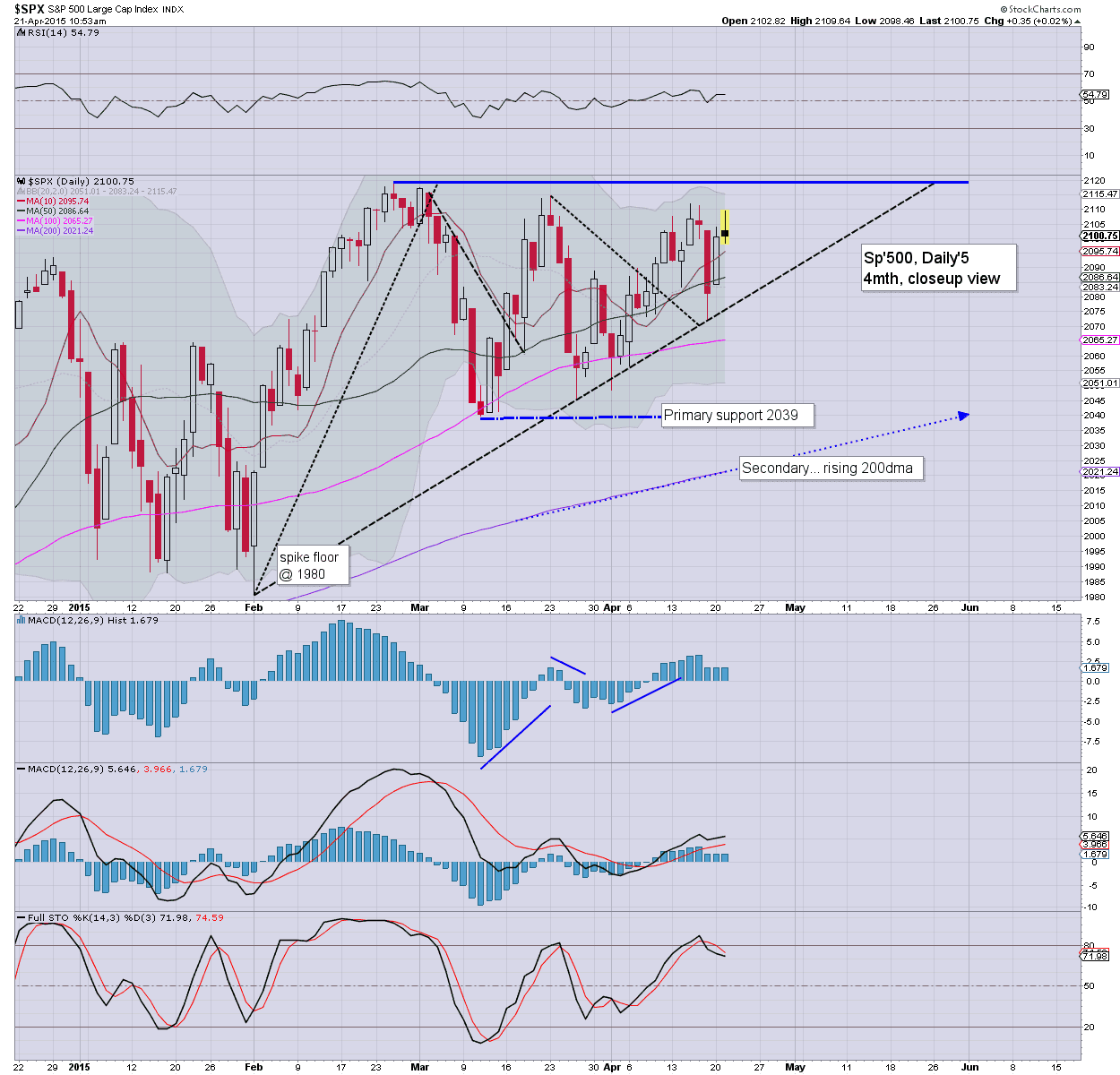 Any equity bears getting overly excited at the opening reversal are battling the bigger cycles that remain outright bullish.

back later.
Posted by Trading Sunset at 15:55:00
Email ThisBlogThis!Share to TwitterShare to FacebookShare to Pinterest

Equities open moderately higher, but there is a distinct air of weakness, with signs of an opening bearish reversal all over the place. VIX is not reflecting any concern though. Metals are broadly flat, whilst Oil is a touch weak, -0.2%. 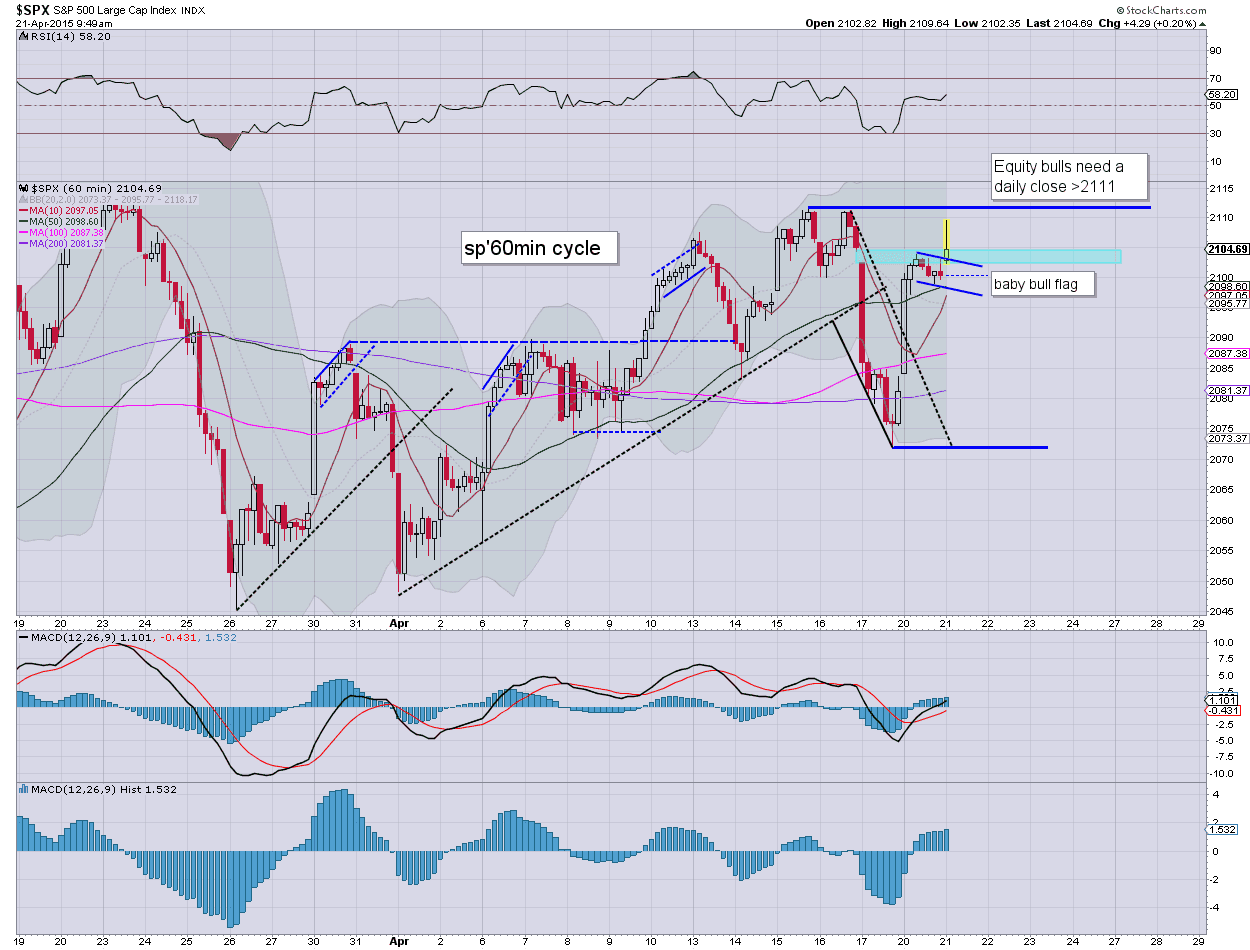 So... opening gains, but they are not looking particularly reliable.

Despite the opening mess...the broader trends remain bullish, there is little reason to believe we won't break over 2111 this week. 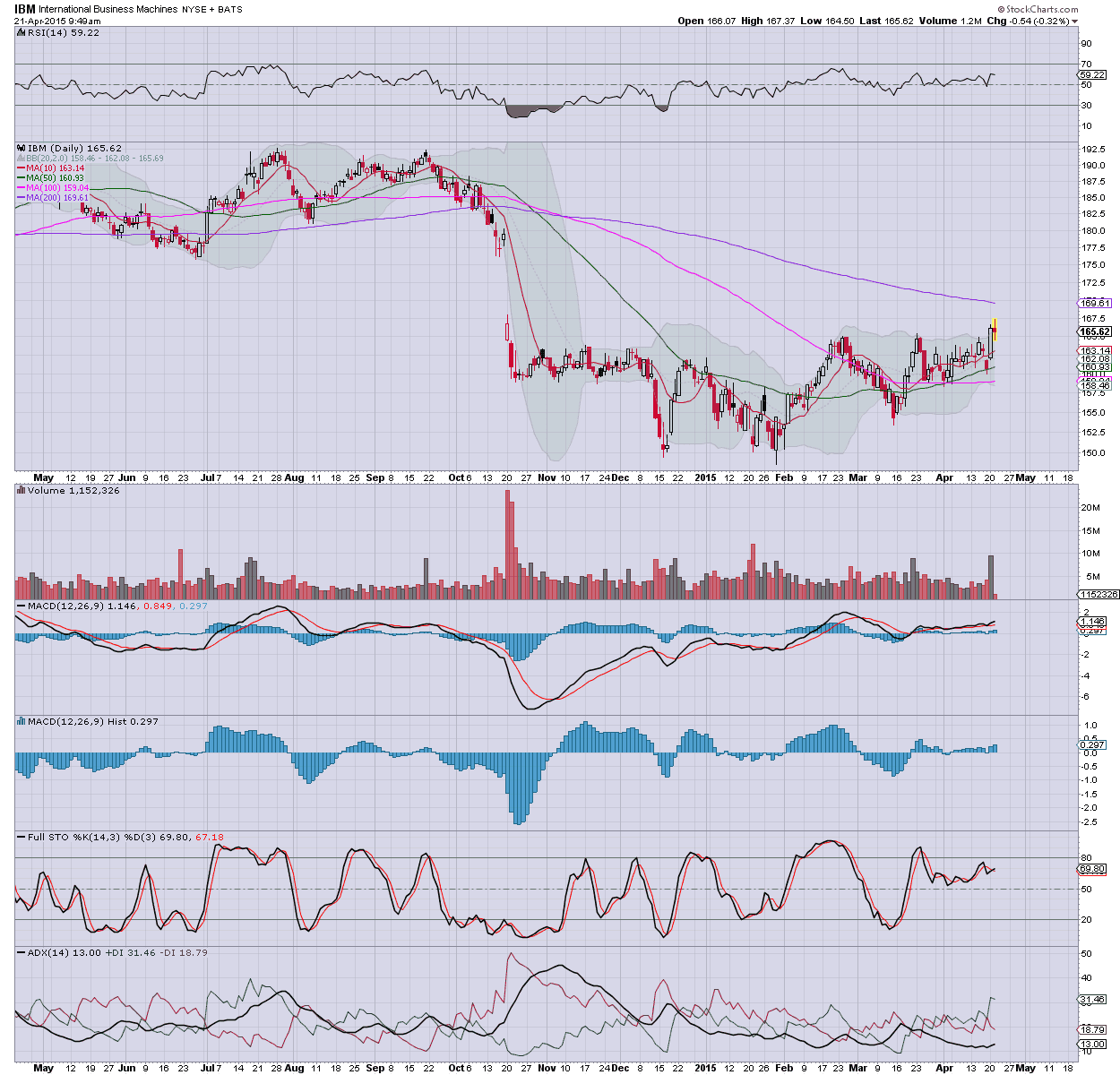 ...not exactly inspiring, after a Monday AH peak of $171.
Posted by Trading Sunset at 14:52:00
Email ThisBlogThis!Share to TwitterShare to FacebookShare to Pinterest

Good morning. Futures are moderately higher, sp +7pts, we're set to open at 2107. Equity bulls have a high probability of breaking above key resistance of 2111, opening the door to new historic highs. Metals are bouncing, Gold +$5. Oil is a touch weak, -0.3% 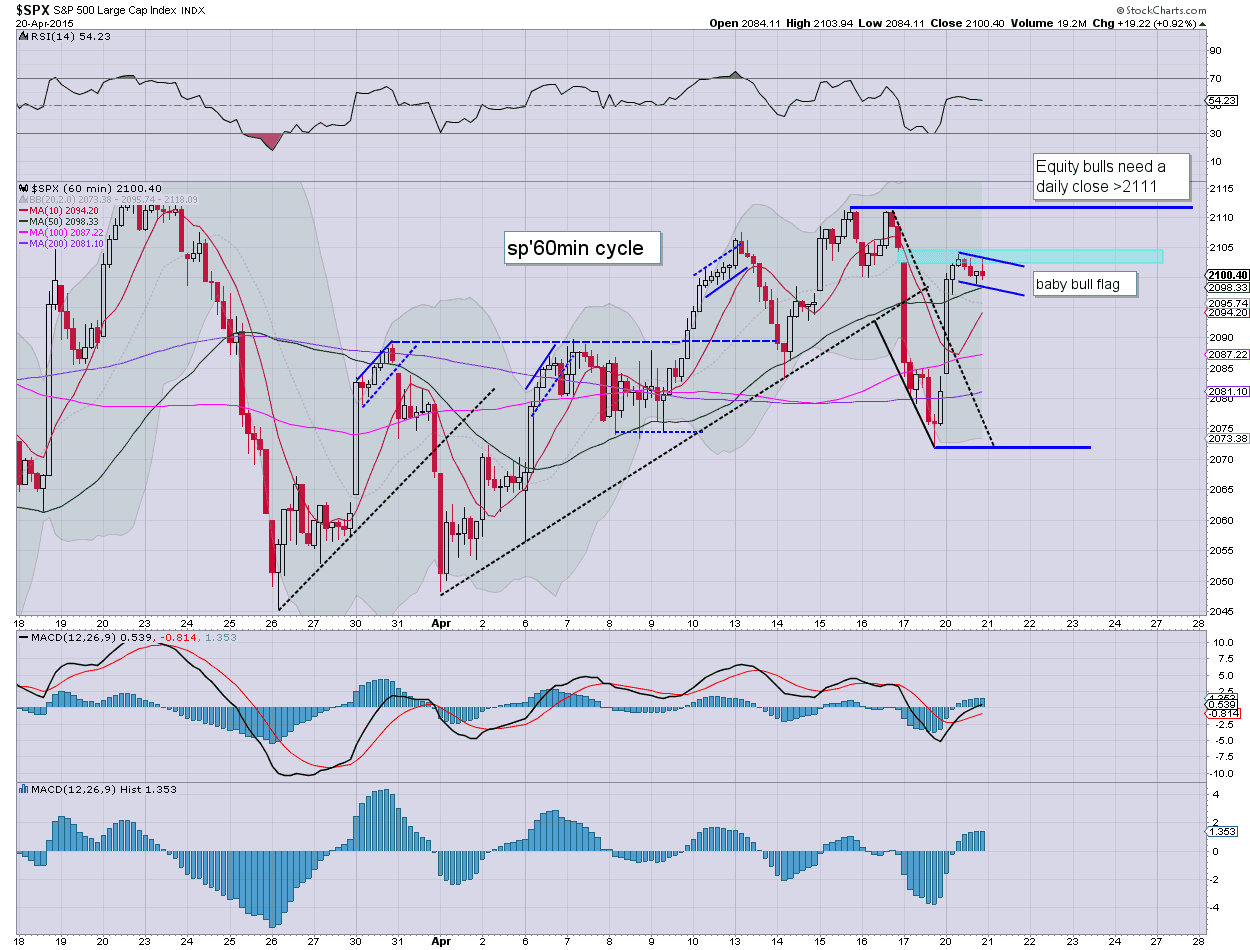 It would appear the baby bull flag will be confirmed at the open... and there looks to be a high chance that we'll take out the recent peak of 2111 this morning.

A daily close >2111 would give clarity that the market will likely battle upward into early May... at least to the 2130s.

Despite what many thought, earnings are generally coming in 'reasonable'.

Have a good Tuesday
Posted by Trading Sunset at 13:03:00
Email ThisBlogThis!Share to TwitterShare to FacebookShare to Pinterest

US equities began the week on a positive note, after some concern across the weekend. Yet, with the PBOC cutting the RRR by 100bps to 18.5%, the broader trend has resumed. New historic highs for all US indexes look due into May.... at least to the sp'2120/30s. 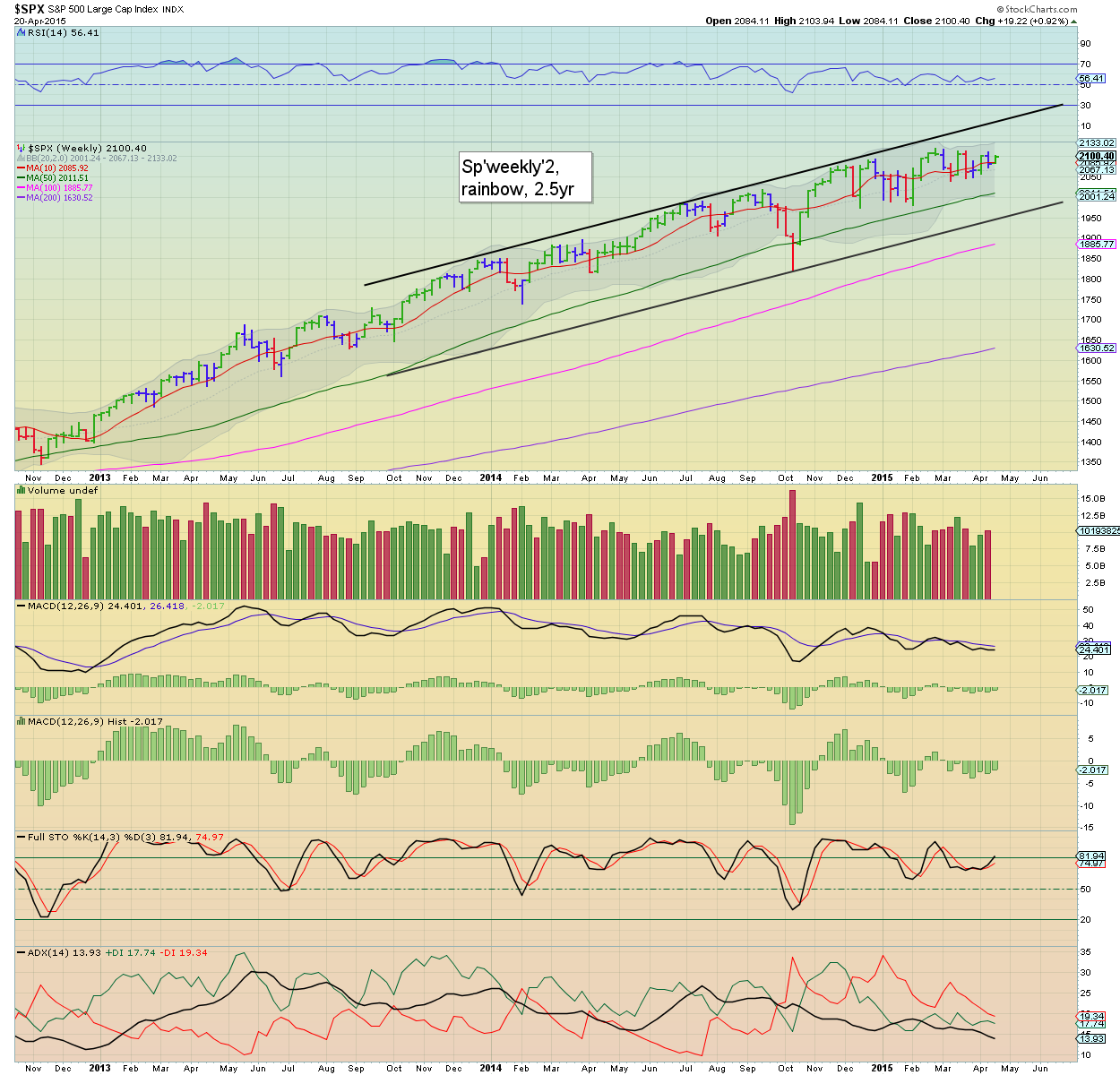 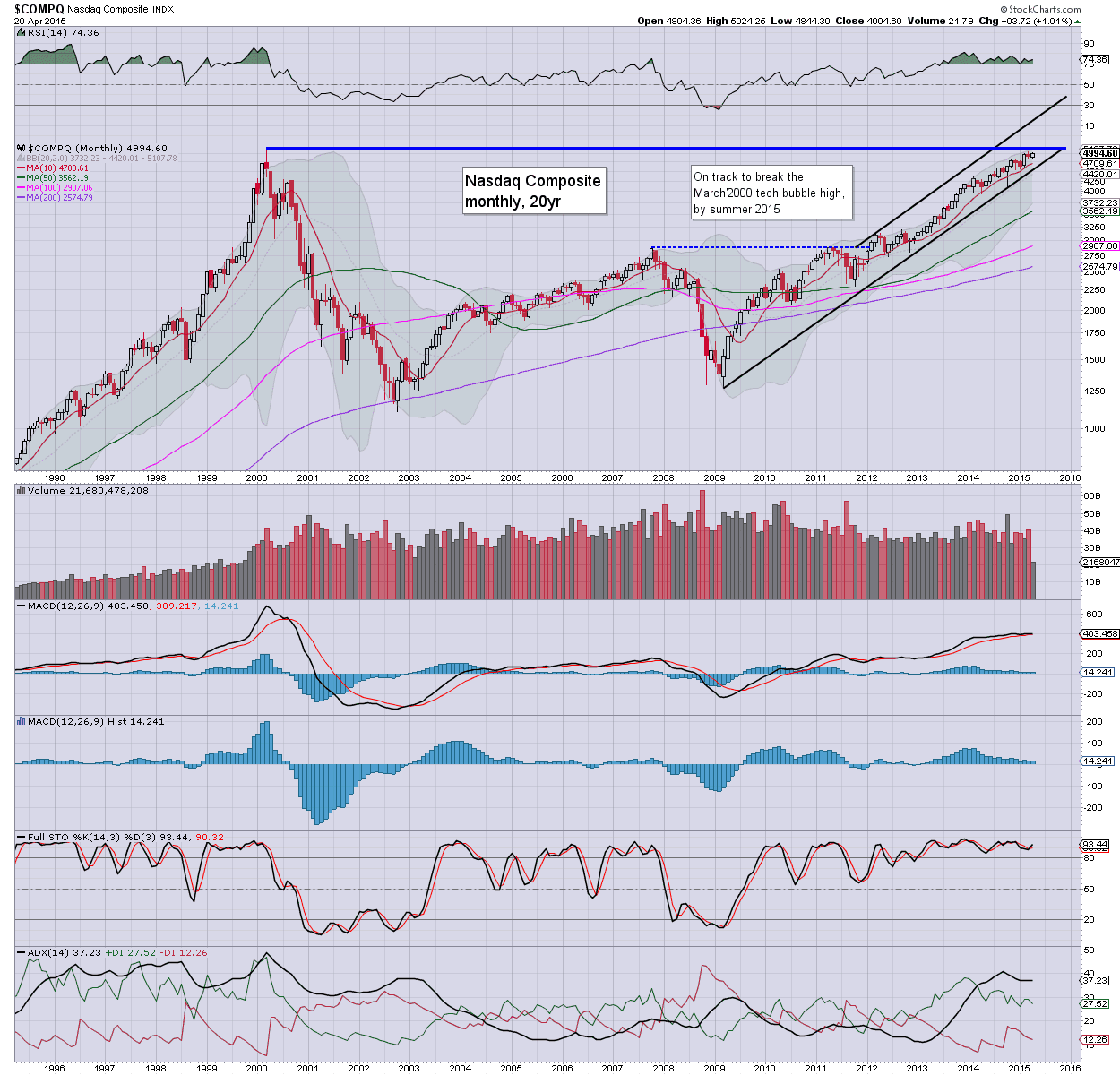 So, the week begins with a new green candle on the weekly 'rainbow' chart, with price action having been stuck within a narrow range since the high of sp'2119 of late February.

The sp'2120/30s look an easy target within the next few weeks. A bigger upside target would be the 2170/80s.. as suggested by the giant monthly cycle, although that will likely take until at least mid June.
-

Update on the USD 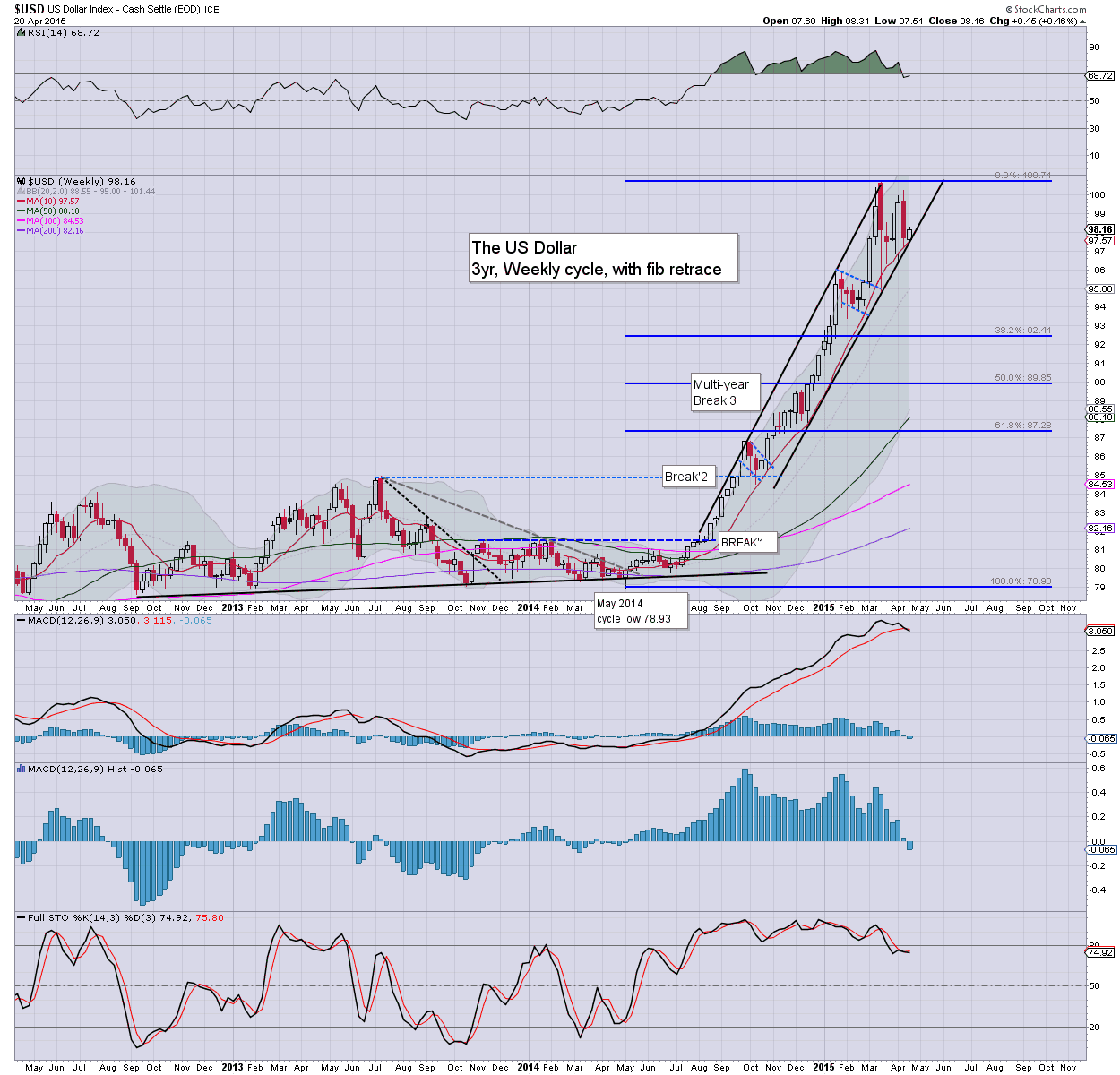 There is of course a truck load of corp' earnings, but there is no sig' econ-data due.

*it is notable there are no fed officials on the loose this week (do they all go away on holiday to the same place together?), to debate monetary policy?
-- 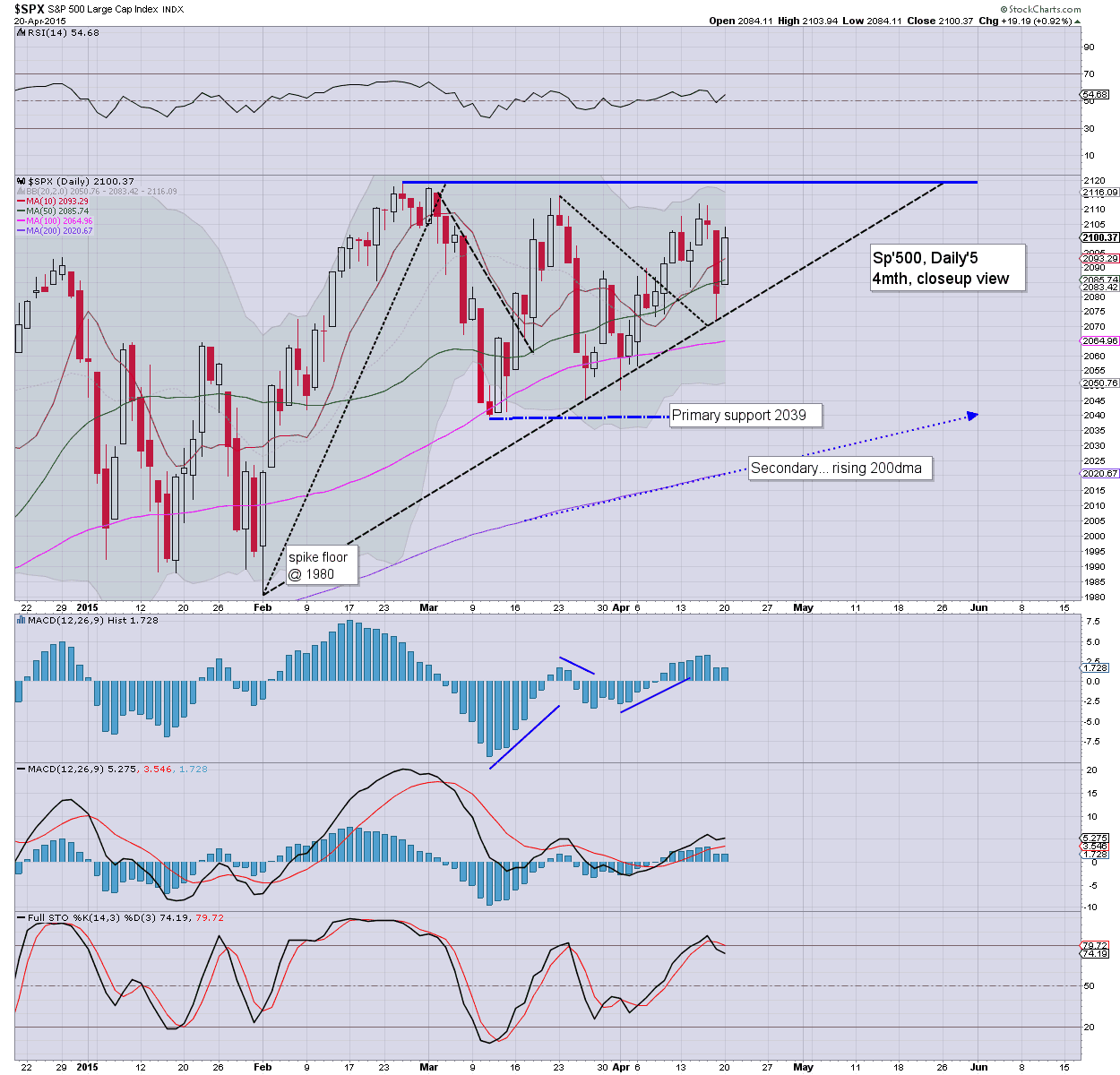 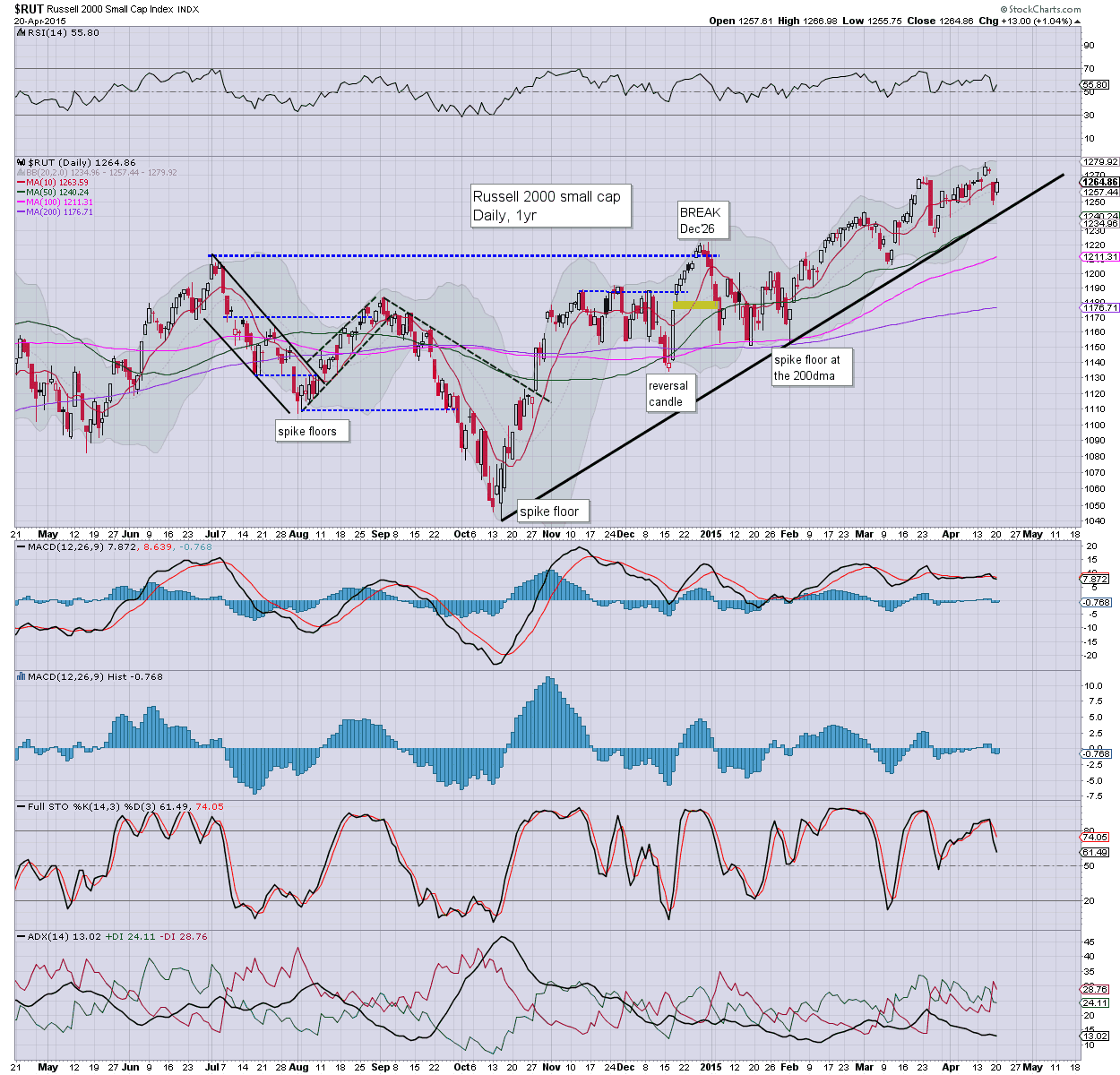 There is little to add... it remains pretty choppy from day to day.. but certainly the broader trend remains bullish... lead by the R2K and NYSE Comp'.
-