On a trading day where the indexes closed flat, and where volume was the lowest of the year, the near term VIX was significantly lower, closing -10% @ 16.68. The whole formation since late October could be a giant inverse H/S formation, if so, then a VIX explosion >20 is imminent. 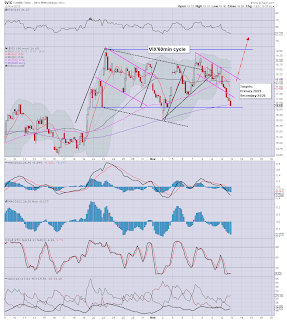 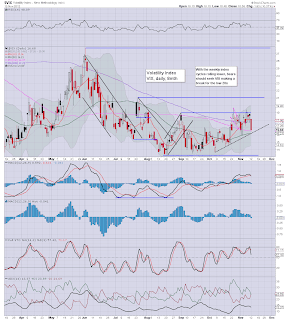 Whilst the indexes were flat today, it was mostly a day where many turned their attention to the volatility index. The VIX managed to close at the lows of the day, although as many have come to realise, it is the near term VIX futures that have got smashed lower, anything beyond front month is still holding up very well.

Its not labelled on the chart, but there is a very viable inverse head and shoulders formation -as best seen via the hourly chart. VIX really needs to hold the 16.50 level to keep the formation intact. A daily close <16.00 tomorrow would violate any hope of that.

However, lets be clear, if it is a inv. H/S, then a VERY strong up move in the VIX should start to begin tomorrow, and continue into Wednesday. First target would be 20/21, and considering the indexes, that would probably equate to sp'1345 - which happens to be my primary target for this cycle.

So, for tomorrow, bears really need to see the VIX open higher..and keep battling higher, preferably back into the 18s.

more later.
Posted by Trading Sunset at 23:00:00
Email ThisBlogThis!Share to TwitterShare to FacebookShare to Pinterest

A quiet day in the market, but then it was veterans day, with the bond market closed. The hourly index cycles are now primed for a new wave lower, with the VIX surely close to a turn back higher. 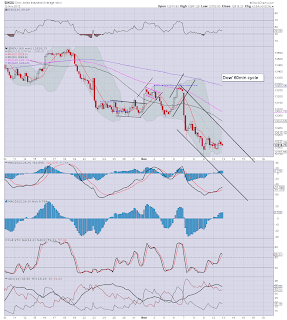 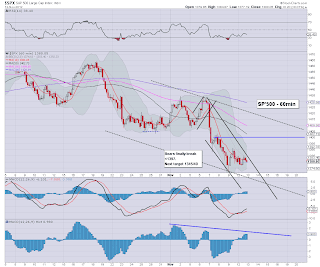 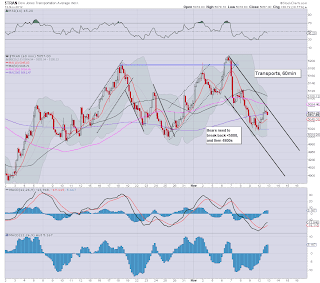 There really isn't much to say, the bigger trends remain weak, and until there is a further major wave lower, I can't conclude that this down move from sp'1474 is yet complete.

I remain short, holding overnight, seeking my next exit in the sp'1360s.

bits and pieces across the evening
Posted by Trading Sunset at 21:02:00
Email ThisBlogThis!Share to TwitterShare to FacebookShare to Pinterest

Strange day, but it'll suffice..I guess. Bears can't complain really, the bulls tried to rally Friday, and completely failed. Today, they managed a few points..and can barely hold onto that. Dollar is holding together, metals and oil weak, the good bears should be patient. 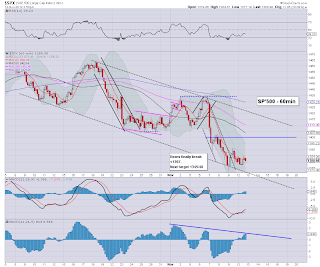 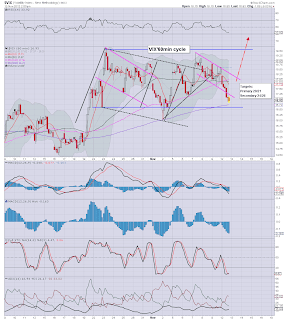 Not much too much to add, its turned into a very quiet afternoon. Clearly - just like last Mon/Tuesday, the market is waiting to make its next move. Considering the weekly charts...that move will surely be to the downside.

*something, quite possibly appropriate, not least on a chilly winters night in London city.

back after the close...
Posted by Trading Sunset at 19:51:00
Email ThisBlogThis!Share to TwitterShare to FacebookShare to Pinterest

A relatively quiet start to the week, and with two hours left of the trading day, the indexes sure look tired. The VIX is finally starting to show the very first sign of a floor, with a spiky tail. 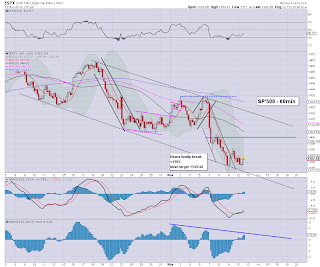 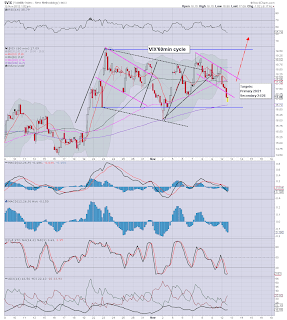 Yes, the VIX is super weak, much more than I expected, but as ZH noted, it is the near term VIX that is weak, the further out months are not really weakening at all. So, once again, the VIX anomaly is really just that...an anomaly..but largely understandable.

Indexes sure look tired around sp'1385. Who wants to be going long this afternoon?

I realise some bulls will suggest that this is just a sign of building a floor..perhaps. Yet we've seen ZERO sign of a capitulation in the market, and we're still only 6% from the QE highs.
--

So, I'm staying short, will hold overnight, and see how the price action is tomorrow.

*bears should remain pleased the $ is holding together >81.
-
back at 3pm

UPDATE 2.30pm..so much for the spike..the VIX falling again. Next soft support, hourly 200 MA @17.72
Posted by Trading Sunset at 18:59:00
Email ThisBlogThis!Share to TwitterShare to FacebookShare to Pinterest

The indexes have flipped to fractionally green, but things seem even weaker than Friday afternoon. The anomaly remains the VIX, still falling..-8% @ 17.12 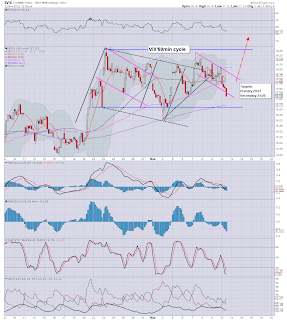 Its not highlighted on the chart, but there is a possible inverse H/S on the VIX, but thats probably assuming way too much.

VIX starting to put in a spike, could be the floor..in which case the indexes are not going any higher.
Posted by Trading Sunset at 17:54:00
Email ThisBlogThis!Share to TwitterShare to FacebookShare to Pinterest

Whilst the main indexes remain a touch lower, the VIX remains the anomaly. It is very low on the hourly cycle, and once a turn higher begins, we should (in theory) see a considerable downward move in the indexes. 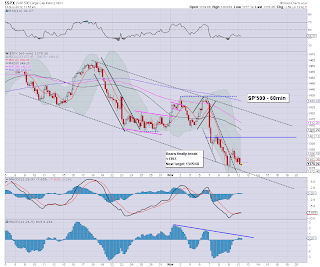 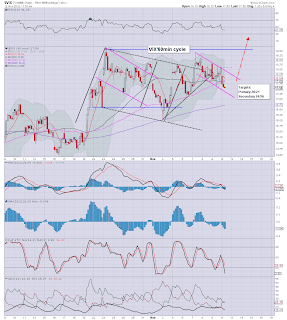 So...red indexes, but a red VIX too. I'm sure many are somewhat confused by it, but we saw it as recently as last Thursday.

Ohh, and another great day in AAPL land... 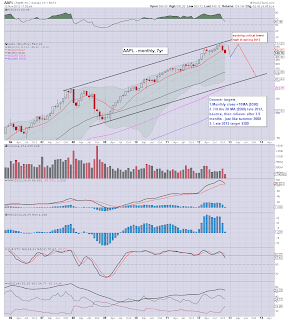 *I'm guessing AAPL will level out somewhere around $500..could even be within next few days..which would sync up nicely with the main indexes @ sp'1350/40

back at 2pm..or earlier..if any drama ;)
Posted by Trading Sunset at 16:54:00
Email ThisBlogThis!Share to TwitterShare to FacebookShare to Pinterest

Whilst the main indexes are starting to show the underlying weakness again, the VIX is -5%, and is once again the anomaly of the day. 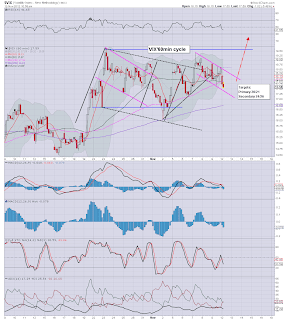 Not sure what to make of it, other than the issue that since 'no crash Monday', there is once again no fear.
--

There IS a clear bull flag on the VIX hourly chart, we'll need a close >19.50 to confrim it.

Hmm..so..VIX seems content to level out around -5% @ 17.50. If that the down cycle is complete, then VIX should crawl higher, with a potential mini-explosion later today.

As noted, bears should be seeking a close >19.50 to confirm much lower levels in the indexes.
Posted by Trading Sunset at 16:00:00
Email ThisBlogThis!Share to TwitterShare to FacebookShare to Pinterest

Good morning, and welcome to another week at the nastiest casino in this part of the galaxy. The main market has opened a touch higher, but its looking very weak. The Friday morning bounce we saw completely failed, and I see no reason why we won't see more intense weakness today proceeds. 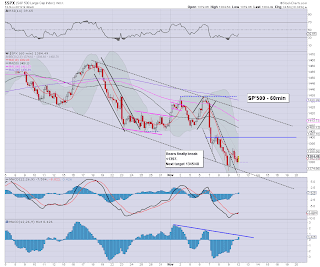 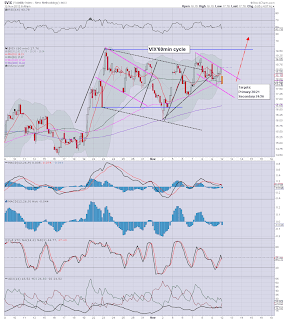 Nothing has changed since last week.

Both weekly and monthly charts suggest a persistent downward pressure on prices, near term target remains somewhere in the sp'1350/40 zone.

VIX is looking a little weak, so long as it doesn't break/close <17, it should not be a concern for the bears.

I'm short, and seeking a break into the 1360s later today or early tomorrow.