With the main indexes closing moderately higher, the VIX naturally melted lower into the weekend, with the VIX closing -5.1% @ 16.76. Across the week, the VIX gained 8.4%, having peaked on Thursday at upper bollinger resistance of 18.71. 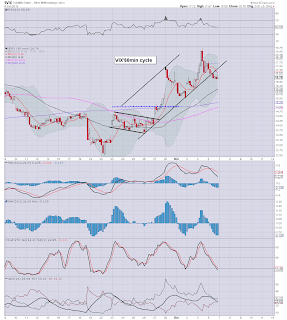 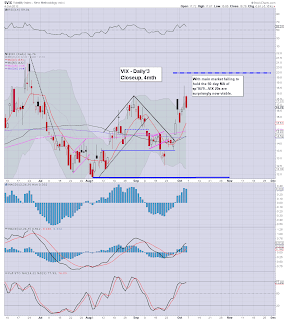 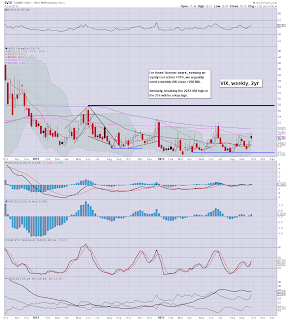 Net gains on the week for the VIX, but the closing weekly candle is a black-fail candle..and does not bode well for the equity bears.

As have been the case since autumn 2011, the market remains supremely confident, and the bears simply can't get a weekly VIX close above the important 200 weekly MA.

Considering the Friday equity price action, VIX in the 20s is again looking a tough challenge.
--
more later..on the indexes
Posted by Trading Sunset at 23:00:00
Email ThisBlogThis!Share to TwitterShare to FacebookShare to Pinterest

The market ended the week with moderate gains, the sp +11pts @ 1690. The two leaders - Trans/R2K, rose 0.5% and 0.9% respectively. Near term trend remains choppy, with the weekly/monthly charts still broadly pushing to the upside. 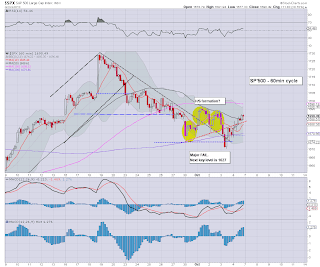 For the bears..this is another deeply disappointing week. Only Thursday showed any decent downside action, and even that was met with a strong bounce into the afternoon.

It was a rough week for many traders, and I'm guessing next week won't be any easier. Without question, any 'normal' person should steer well clear of this market.

Arguably, the only decent time to get involved will be AFTER the debt ceiling issue is resolved, and then of course, it'll be a situation of 'chase it higher..or at least..don't short'.

-
Have a....restful weekend.
--
the usual bits and pieces across the evening.
Posted by Trading Sunset at 21:02:00
Email ThisBlogThis!Share to TwitterShare to FacebookShare to Pinterest

Equity bulls just need another 2pts to flip the weekly charts back to outright bullish. Mr Market is right back to the mindset of the past few weeks..it just doesn't care. Underlying upside is clearly apparent in the hourly charts again. VIX is melting into the low 16s. 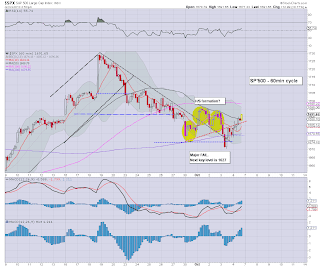 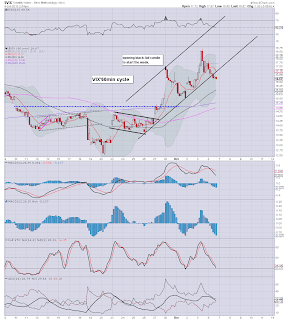 The market simply does not care about the shutdown...and everyone realises the US won't default. Once that issue is out of the way, its a free run into next spring.
--

*ohh, and yes, I'm naturally now getting ground down on the short side. The last two weeks have been a complete waste of time, never mind the cost.
-

Congrats to those who were boldly buying the latest dip yesterday! Clearly, some are ending the week well.
-

3.51pm...minor chop in the closing hour, but hell..bulls owned today..and arguably the week.
Posted by Trading Sunset at 19:58:00
Email ThisBlogThis!Share to TwitterShare to FacebookShare to Pinterest

The main indexes are still moderately higher, with the sp +0.5% in the upper 1680s. With two hours left of the trading week, equity bears should be desperate for a flat close, with a VIX back in the 17s. Metals are back to weak, with Gold -$9. Oil is starting to slip, now just +0.4%. 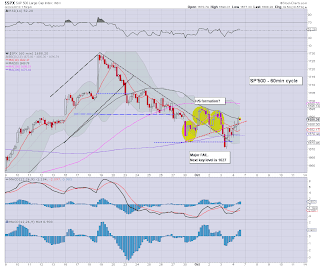 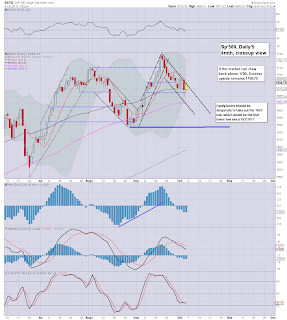 Two hours is plenty of time to cut the market back to a flat close..or even a touch red.

Bears could do with a news report to unsettle the market into the close. Hopes huh?
--

The Dow - which remains the weakest index, is still looking moderately bearish on the weekly charts. 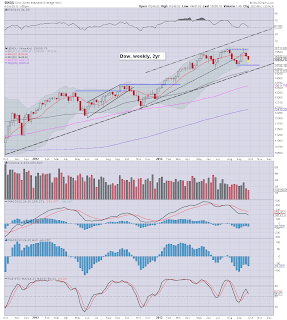 First downside target remains the Aug' low of 14760, and then the 14400s.
Posted by Trading Sunset at 18:56:00
Email ThisBlogThis!Share to TwitterShare to FacebookShare to Pinterest

Market remains on the edge of breaking back to the upside, with bears seemingly completely powerless again. VIX is melting lower, back into the 16s. Equity bulls should be charging for an extra afternoon push into the mid 1690s..which will turn everything back to bullish. 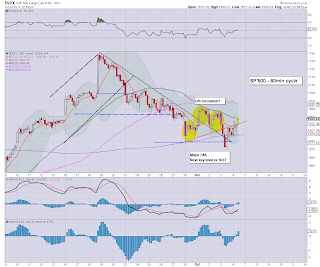 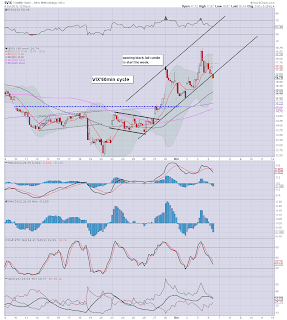 Bears are weak..and the VIX is suggestive of a major failure.

Despite the uncertainty of the ongoing shutdown/debt ceiling...market is back to not particularly caring.
--

After all, what is clear...even if the debt ceiling is not initially resolved when the time is up...a few days later..it will be....at which point the market will be soaring. As if the US will not just continue to print its way out of every problem.

Posted by Trading Sunset at 17:57:00
Email ThisBlogThis!Share to TwitterShare to FacebookShare to Pinterest

12pm update - bears on the edge of another failure

The main indexes are holding moderate gains, and it would seem the bears are back to the same old problem of lack of consistant downside power. A weekly close in the mid 1680s or higher, will keep open the door to a 'shutdown/debt ceiling agreement' hyper-ramp into the mid 1700s 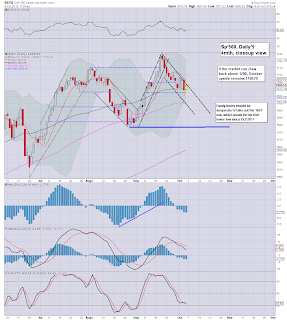 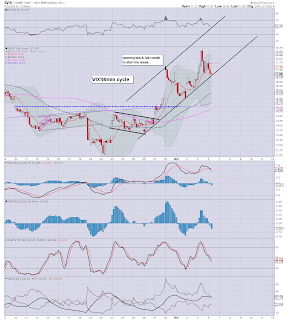 *VIX still holding the channel, but really, its not looking good for equity bears.
---

The sp' daily chart probably sums up the situation better than anything.

Yes, we remain in something of a down trend/channel, but really, it is not very steep..and baring some news report to scare the market this afternoon, bulls are close to taking back control
-

..time for a depressing lunch hour of nothing.
Posted by Trading Sunset at 16:58:00
Email ThisBlogThis!Share to TwitterShare to FacebookShare to Pinterest

11am update - messy end to the week

The market has managed a small ramp to sp'1687, with the VIX -4%, back in the 16s. Either the bears contain this today..or bulls can laugh themselves into the weekend. A weekly close >sp'1693, and the weekly charts will flip back to outright bullish. 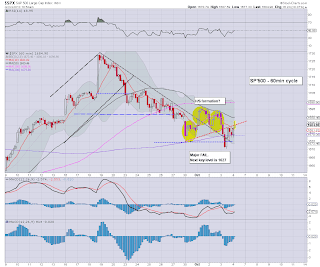 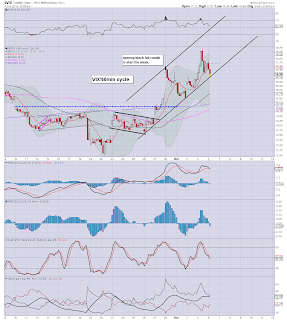 *VIX is just about holding the up channel, but really, its not looking so great right now for those in bear land.
--

Its becoming tiresome again, with no jobs data, no QE, not much of anything.

Right now, a close in even the sp'1670s looks difficult.

The main indexes are moderately higher, with the sp' making a play for the mid 1680s.  VIX is a touch lower, but still holding the mid 17s. Metals are very choppy, with Gold now -$7. Oil is holding gains of around 0.9%. 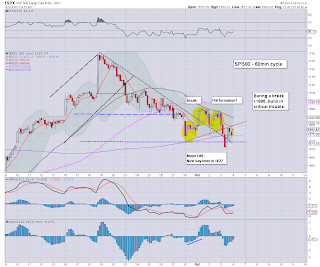 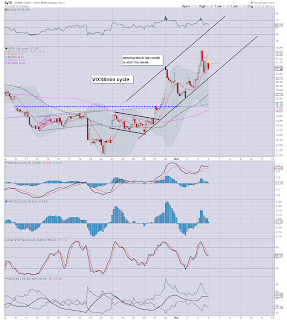 *Bears should look to keep the market under the declining hourly 10MA - currently 1681. Any failure, and the 1690s will be open.

A weekly close >1693, would see the weekly charts flip back to outright bullish.
-

A long day ahead...where we close..will probably be dependent upon any sporadic news headlines from the Obama/Boehner camps. No doubt, both sides will want to issue some kind of press release ahead of the weekend, if only to score a few more political points.

well, market breaks upward..and now the next level is 1690.

The Twitter IPO listing is giving clown TV something positive to focus on. Forget the debt ceiling, the only issue is how many Twitter shares can we get our hands on!

*If VIX breaks <17...equity bears are going to start looking stupid again, not least yours truly.
Posted by Trading Sunset at 14:53:00
Email ThisBlogThis!Share to TwitterShare to FacebookShare to Pinterest

Good morning. Futures are a touch higher, sp +2pts, we're set to open around 1680. Metals are flat, whilst Oil is around 1% higher. USD is +0.2%, but still below the big 80 threshold. Equity bears should be seeking a weekly close in the 1660/50s, on continued market concern of the debt ceiling. 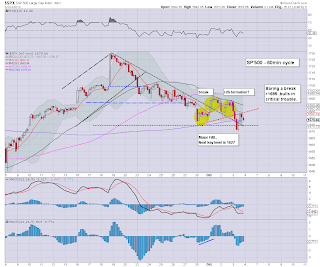 So we're set to open a bit higher, but a return into the 1690s looks very unlikely today.

There would seem little reason why the market will end the week on an upbeat note.

The obvious question is why would anyone want to hold long across the weekend?
--

We have an interesting day ahead..lets see if we can break into the 1660s later today, which would really start to spook the bulls.

*key levels to watch on the dow ...  14760...and 14400, although the latter looks highly unlikely, even if nothing is resolved on Capitol Hill for another week.
Posted by Trading Sunset at 13:34:00
Email ThisBlogThis!Share to TwitterShare to FacebookShare to Pinterest

For the first time since June, equity bears are finally starting to show some downside power, with an early morning break under the 1675 Monday low, and a daily close just under the 50 day MA of 1679. How we close the week will be vitally important, for both bears..and bulls alike. 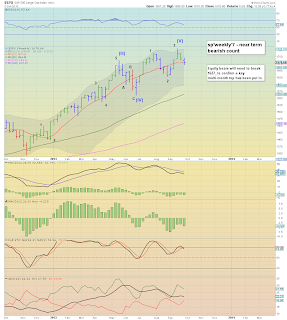 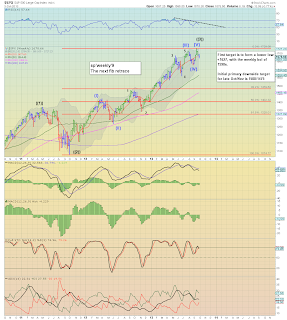 Now, lets get this clear, I'm always suspicious..and have little more than contempt for the political maniacs. We have seen them play endless little 'crisis' games in the past five years. The current shutdown/debt ceiling arguments are more than likely just another situation that will be resolved with a 'last minute agreement'.

Right now, the notion of the debt ceiling not being raised still looks very unlikely, not least if the market falls another 2-3% across Friday/early next week. Any further market downside will put significant pressure on Boehner/Obama to at least form a short term compromise.

Re: weekly7. This assumes 1729 was a key multi-month high, and arguably we'll have initial confirmation with a break of 1627. The lower weekly bollinger is currently 1594 - a very significant 85pts lower, so that's going to be very difficult to hit, even if the market trends lower for another 4-6 days.

There is one really important thing I wanted to note in this closing post of the day. Since the Oct'2011 low of sp'1074..we have been putting in relentless higher highs..and higher lows. Now, take the Dow..which as many realise..has been the weakest index lately... 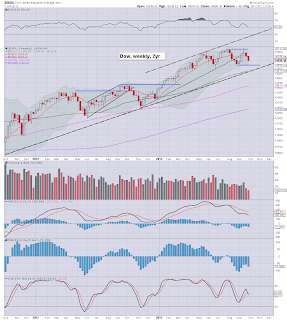 For those seeking severe autumnal downside, the key level to break is the weekly low from late August of 14760. That is 226pts lower from current levels, and is certainly within range for tomorrow/early next week.

ANY daily/weekly close in the 14600s will be decisive enough to break the pattern of higher highs..and higher lows..that has endured for almost two full years*. There is trend support from Oct'2011 around Dow 14400. So, the bulls still have around 600pts of buffer zone before any 'critical' damage is done.

*indeed, tomorrow, Friday, Oct'4, is the two year anniversary since the market floored

The monthly jobs report is on hold, due to the Govt. shutdown. There are some fed people talking though, so...Mr Market could again get swung around on any sporadic news headlines.

*there is no sig' QE-pomo until next Monday.
--

*I am SHORT the main indexes as of Thursday afternoon, from sp'1681. I would prefer an exit into the weekend, preferably somewhere in the low 1660s..if not the 1650s, which would ramp the VIX into the low 20s.

The main indexes all closed lower, with the sp -15pts @ 1678. The close below the 50 day MA is especially bearish, and the price action was arguably the most bearish we have seen since June. The VIX confirmed the increasingly unstable market, with a close in the mid 17s. 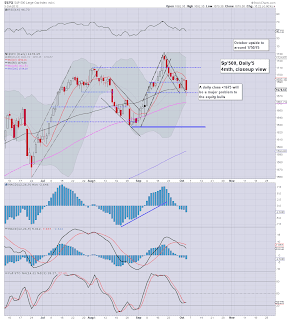 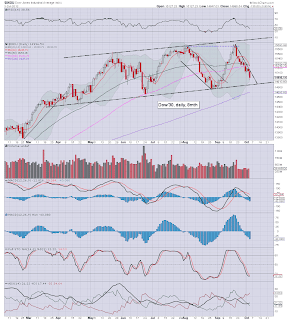 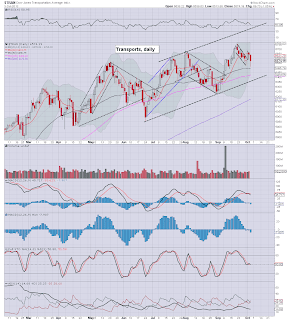 So...today we had the first decent bit of downside power in the current down wave - from the sp'1729 FOMC high.

The close under the 50 day MA is important, but most important of all..we saw the 1674.99 low decisively taken out.