Despite the indexes closing higher yet again, the VIX held steady across the day. The VIX closed +0.03%, to settle @ 12.46. These remain bizarrely low levels for the VIX, and a brief spike higher 'sometime soon' still seems likely. 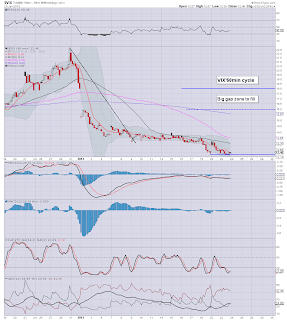 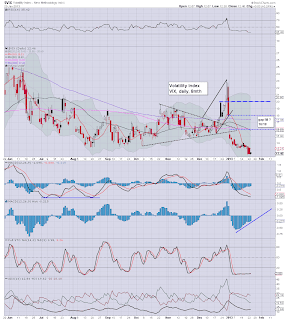 The hourly chart is showing a VIX that is flat lining. Certainly, if the indexes keep rising, sp'1510/20 would probably kick the VIX <12. However, the indexes are looking tired, and upside is very likely no more than another 2% at most.

The Daily MACD cycle on the VIX is still ticking higher, but the recovery is slow. If might not be until next week until we go + cycle again... at which point the VIX should see a few days spiking higher. The only issue is how high.

Another tiresome day of slow motion upward melt. Bears have seemingly zero power, and the current upward trend shows no sign of ending. A repeat of autumn 2010 ? The Rus'2000 closed a touch lower, but really, the general trend remains consistently higher. 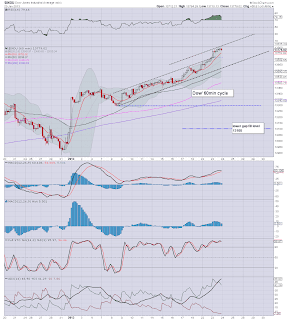 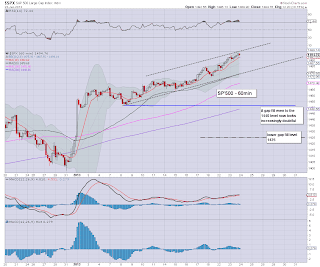 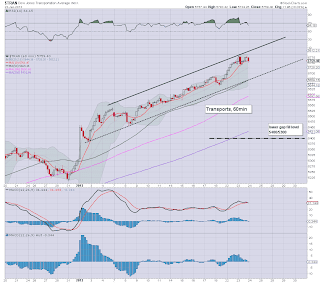 Transports remains the leader, with the Dow pushing higher today - almost entirely due to the jump in IBM.

More later..on the indexes and the VIX.
Posted by Trading Sunset at 21:02:00
Email ThisBlogThis!Share to TwitterShare to FacebookShare to Pinterest

Another few hours of algo-bot micro-melt. Truly tiresome. Metals showing a little weakness still, and despite the higher indexes - not least the Transports, the VIX is holding steady. 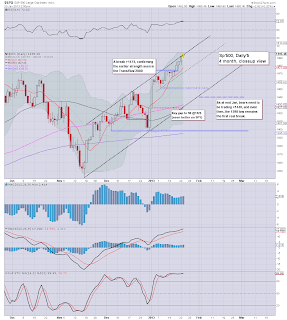 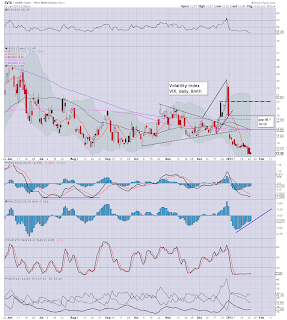 back after the close.
Posted by Trading Sunset at 19:52:00
Email ThisBlogThis!Share to TwitterShare to FacebookShare to Pinterest

Another day of virtually nothing. Hourly index charts offer potential minor downside in the late afternoon, but that is usually when the algo-bot ramp will kick in. Urghh ! 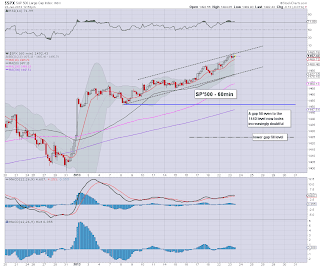 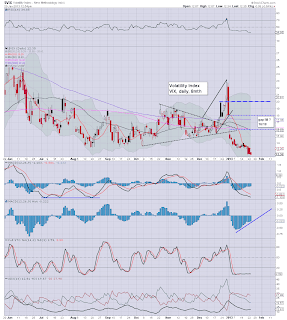 Truly tiresome, and it seems like months since we saw a 1% index decline. Well, it was really just over 3 weeks ago (Friday Dec'28), but it sure feels longer.

VIX continues to flat line, surely we'll get back to the 16s soon?

--
How will IBM close? A close under the opening gap would result in a somewhat bearish black spiky candle. 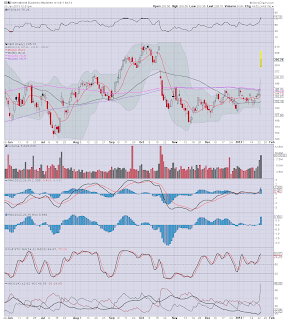 There is increased talk about Gold getting stuck at the 50 day MA. Certainly, I think we still see a final fifth wave lower..before a major move higher into the spring. 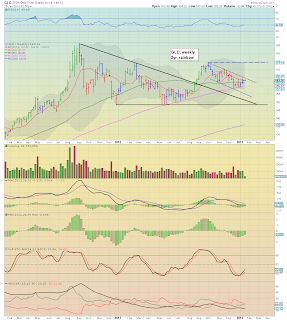 back at 3pm
Posted by Trading Sunset at 17:58:00
Email ThisBlogThis!Share to TwitterShare to FacebookShare to Pinterest

Market seems to have lapsed into sleep mode. VIX is flat lining. The only marginally interesting aspect is that the metals are offering a possible rollover in the coming few days. 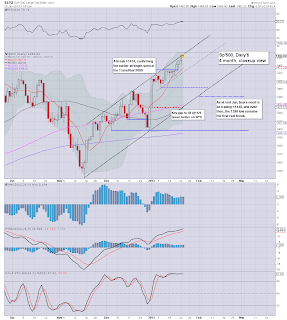 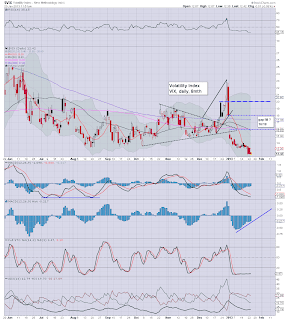 GLD, stuck under the 50 day MA 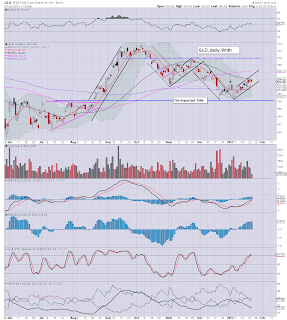 A fifth wave lower, before major up into the spring?
Posted by Trading Sunset at 16:55:00
Email ThisBlogThis!Share to TwitterShare to FacebookShare to Pinterest

A minor wave lower is underway, but first support is some considerable way lower. Bulls have phenomenal buffer zone on the downside before any damage is done the current up trend. Even the much touted retracement - as low as sp'1440s, would do nothing to the disturb the current trend. 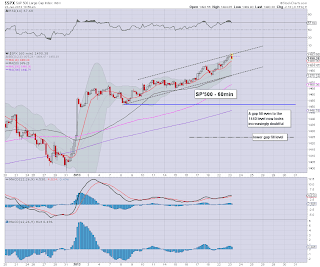 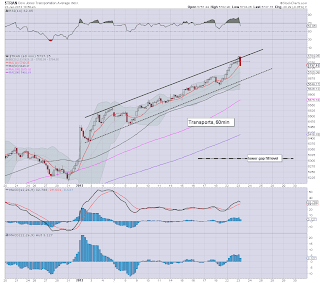 Certainly, its nothing remotely significant enough for any bear,, and as we've seen for the past 3 weeks, late afternoon is usually 'algo-bot melt up time'.

*VIX is similarly trying to build a floor, with the 16s, a good 25% higher.
Posted by Trading Sunset at 15:52:00
Email ThisBlogThis!Share to TwitterShare to FacebookShare to Pinterest

Good morning. A somewhat muted open, and the hourly cycle would offer minor potential downside later in the day and early Thursday.  Meanwhile, the Transports puts in yet another new high. Metals are a touch higher. 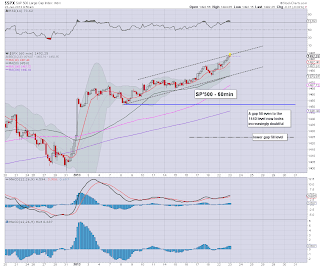 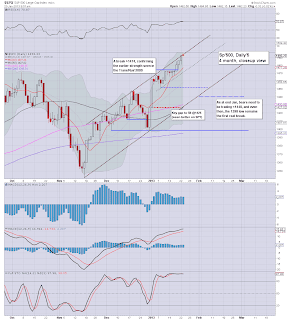 Again, I'm not expecting much of anything today. There is still a complete lack of power on the bearish side, and the algo-bots could easily take control in the afternoon.

Yet the hourly MACD cycle is potentially maxed out, and its possible we might even close a touch lower today.

The sp'1460s look a long way down though, and considering the upward trend - especially seen in the Trans/R2K, its going to be very difficult to break <1470 any time soon.
--

*I remain long VIX from last Friday..seeking a spike to the 16/18 gap zone. I don't expect 20s before April/May though.
Posted by Trading Sunset at 14:54:00
Email ThisBlogThis!Share to TwitterShare to FacebookShare to Pinterest

It could be a very long wait

Another tiresome day of slow motion algo-bot melt upward. The monthly charts offer near term upside to sp'1510/20, and with the VIX in the low 13s, it remains a market of no fear. Besides, whats to fear, the Bernanke is printing, right?


sp'monthly3d - waiting for a red candle 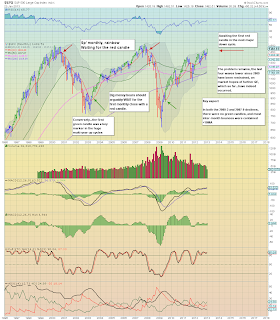 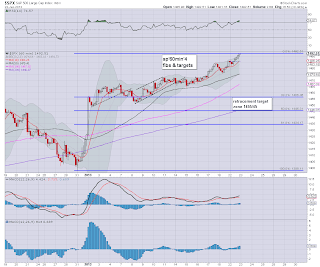 Starting with the 60min chart, with another day higher..the retracement target has to be moved up another bit further. Even the low sp'1440s now look 'difficult'.

If we just keep on melting higher into early February - and then get stuck around 1520, any index retracement would probably be no lower than the old resistance/high of 1474. In many ways, that would make for a more natural move.


Where is the red candle?

The monthly chart listed above clearly shows the embarrassing lack of declines since the Oct'2011 low.  Soon it will be a year and a half since the last bearish candle on the rainbow chart, and with the current green candle, it seems there is no real hope of a red candle until April/May.

There is very little going on for the rest of this week, so..it does seem likely the current melt upward will just keep going.

The only slightly bearish aspect is the daily VIX chart, which - at the current trend, will go positive MACD cycle by this Friday/next Monday. A brief spike into the low 16s still seems viable, but..hey, I've been saying that for almost two full weeks.
--

There is a truck load of key econ-data next week, so..those looking for some kind of retracement - or 'dip buying opportunity', should probably sit back until the middle of next week.

A tiresome day I think..for many.

Another day where the main indexes opened a touch lower, but closed higher. Once again, strong leadership was seen in the Transports and the Rus'2000 - both setting new historic highs. There is absolutely no sign of the current upward trend ending. 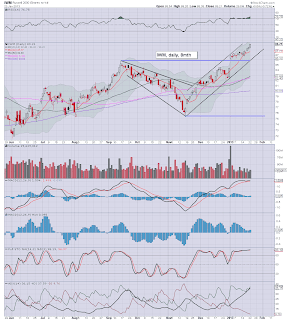 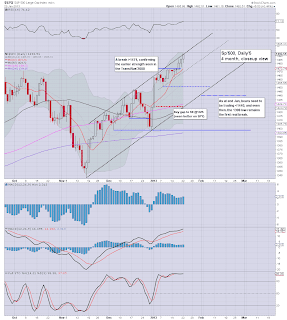 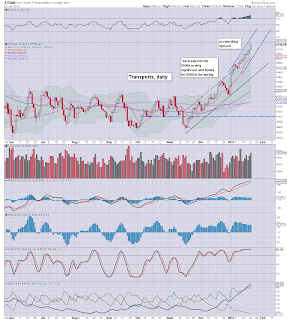 Well, what can be said?

We have the most incredible rally continuing, lead by the transports which is simply putting in an astounding rally from the lows in mid December, and the trend is actually accelerating.

Lets be clear, there really isn't any ceiling on how far we can go.

The market is propped up by the Fed, with 45bn of POMO money every month, and much of that money is surely finding its way into the equity market. Unlike 2009/10/11...this stream of 'free money' for the financial institutions will just keep on coming.

QE..indeed without end..and we're now probably seeing some of that money significantly help kick the market to new highs.

No doubt a retracement will come, but..considering the strength seen right now, even the sp'1440s now look out of range. If we first go to 1520 for instance, then a retracement might be to merely back test the old high of 1474..before a further long summer ahead into the 1600/1700s.

Crazy talk? Well, I can only suggest you again look at the Transports charts, especially the monthly one.