With a powerful latter day equity rally, the VIX was unable to hold early significant gains (intra high 16.28), settling -0.7% @ 13.61. However, near term outlook is for renewed equity weakness to the sp'2040s, which should equate to VIX 17/18s. The big 20 threshold looks out of range in the current cycle. 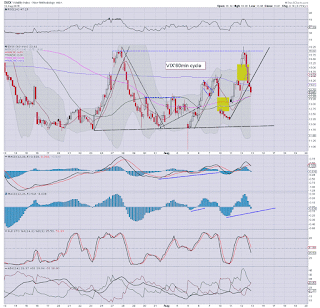 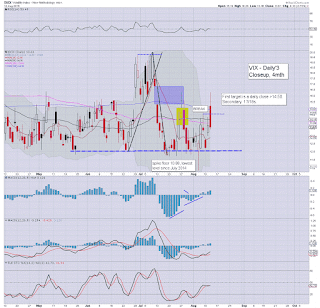 A pretty wild day in the US markets.. with VIX leaping above key resistance of the mid 14s... maxing out at 16.28.. and then rapidly cooling to a late afternoon low of 13.45

Overall... the VIX looks to have merely seen another pull back (if a rather severe one).. and the 17/18s look viable within the near term.

The big 20 threshold though, still looks out of range in the current cycle.

-
*yours truly exited VIX-long in the morning from 16.20... and is now re-long VIX from 14.42. Not surprisingly, I was early again on my latest entry, but overall, I'm content with being involved again from the 14s.

I would certainly be content with any pre-weekend exit >16.00, but that will clearly require the sp'2050s. 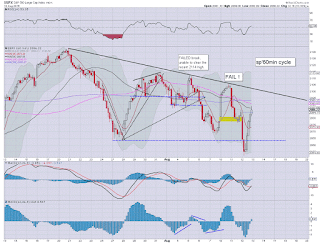 ... and another wacky day in the world's most twisted casino comes to a close.

Frankly.. I realise many will be utterly bemused at today's latter day ramp.. but then.. we saw some crazy action just this past Monday.

Broadly, nothing has changed, it remains a case of increasing weakness as seen on the bigger weekly/monthly cycles.

I realise some are seeking new index highs in the weeks ahead.. but I find that implausible.
-

US equities have somewhat bizarrely pushed back to almost break even, with the sp' ramping from 2052 to 2081, with VIX having cooled from 16.28 to 13.99. No doubt the bull maniacs will be calling for a key floor, with new highs 'due'. 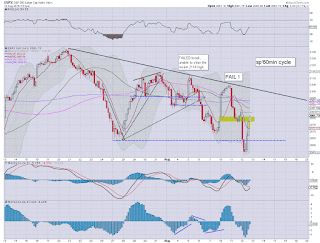 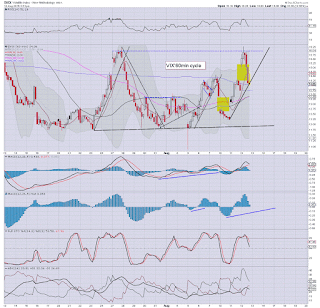 So..  a crazy ramp..  and I thought the 2070s were asomewhat bold call this morning.

Regardless, nothing in the bigger picture has changed. A day where the market broke a lower low, and with further technical damage on the bigger weekly cycles.

--
*I will hold long-VIX overnight, and have little concern.
-

Crazy.   So.. what the hell is driving this up.. other than a hyper-short stop cascade?
-
Posted by Trading Sunset at 19:56:00
Email ThisBlogThis!Share to TwitterShare to FacebookShare to Pinterest

The current situation is pretty clear... either this move from sp'2052 to 2077 is a mere bounce.. or a grand new multi-week up wave has begun. Considering the weekly/monthly charts - which have been warning of trouble for months... I remain inclined to the bounce view. 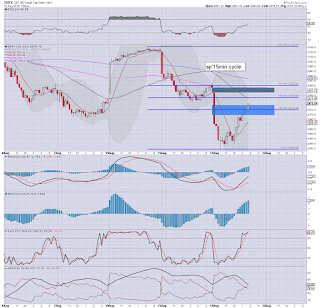 Considering I exited at 16.20 this morning.. I'm very content with the current setup.
--

Meanwhile... in the city... feels like summer is indeed winding down. 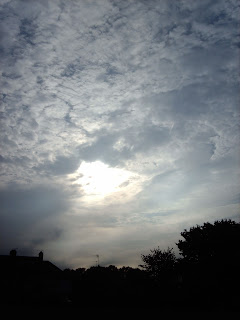 VIX has filled the opening gap.... back amongst old (Broken) resistance in the mid 14s. 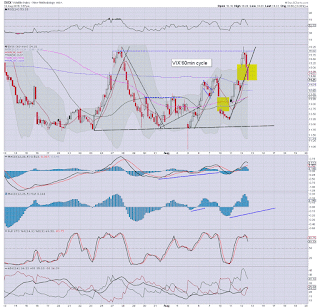 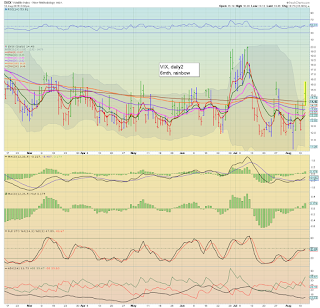 notable weakness:  BAC, -2.6%.. as the threat of int' rate rises is fading
Posted by Trading Sunset at 18:50:00
Email ThisBlogThis!Share to TwitterShare to FacebookShare to Pinterest 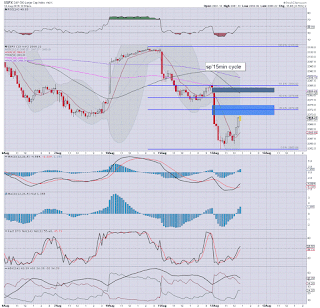 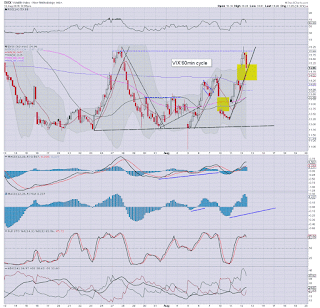 As ever... without getting lost in the minor noise, unless you are of the mindset that the market is headed to new historic highs... every bounce is to be treated as such.

back at 2pm
Posted by Trading Sunset at 17:56:00
Email ThisBlogThis!Share to TwitterShare to FacebookShare to Pinterest 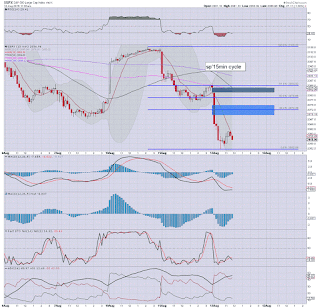 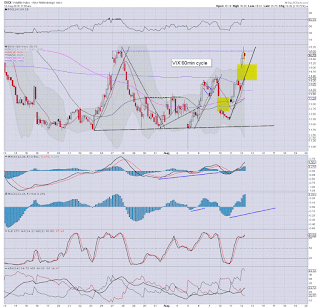 Unless you are of the mindset that 'new highs are coming'... to me, this is merely another bounce to short.

*I will likely pick back up a VIX-long block late today/early tomorrow.
---

--
time to see if the cheerleaders are crying yet on clown finance TV.
Posted by Trading Sunset at 16:55:00
Email ThisBlogThis!Share to TwitterShare to FacebookShare to Pinterest

11am update - VIX cooling to the gap

US equities have likely floored for the day at sp'2052 - with VIX 16.28. However, there still seems high likelihood of another equity wave lower before the Friday close. The bigger weekly/monthly cycles continue to increasingly swing in favour to the bears. 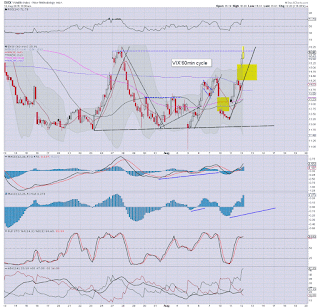 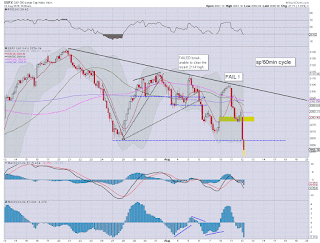 VIX was a fine exit.. but intel has been particularly annoying lately, and I will probably leave it alone for some time.. despite a H/S target of $22.50.
--


So... a morning washout.. and we're clearly seeing some considerable technical damage.

*I will strongly consider picking up VIX again, in the 15.20/14.25 zone. The 14s do look difficult though, considering the current momentum.

What most should likely recognise, the big 20 threshold does not look viable in the current cycle.
-

I will strongly consider picking up VIX in the 14s late today/early tomorrow... for a short term trade, with a target exit before the Friday close.
Posted by Trading Sunset at 15:52:00
Email ThisBlogThis!Share to TwitterShare to FacebookShare to Pinterest

US equities open sharply lower for the second consecutive day, with the market a clear 50pts below the Monday high of sp'2105. VIX has finally broken above resistance of the mid 14s, +13% @ 15.50s. Near term outlook is for continued weakness to the early July low of sp'2044, and that should equate to Dow 17K with VIX 17/18s. 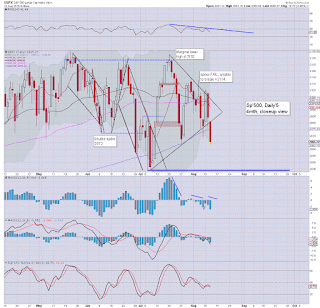 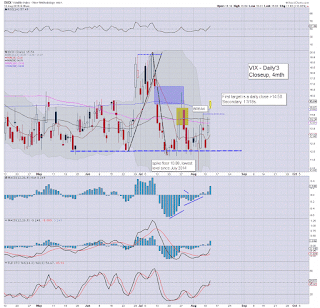 A clear break higher in the VIX... and if you can accept the notion of at least another day higher to 17/18s.. then you have to also be seeking the sp'2040s. 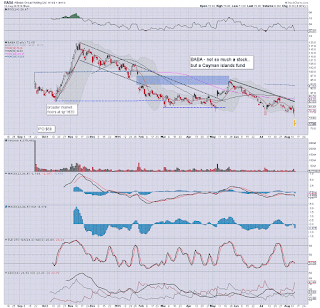 Ugly daily chart... nothing good there. Even clown finance TV were bitchy after the CEO's rather robot-communistic interview.

--
For the moment, I am holding short the market... but I will certainly look to be fully closed out by the Friday close.
-

*awaiting the latest EIA oil report at 10.30am...   If Oil breaks under the March low in the $42s today... it'll really drag the main market with it into the afternoon... and tomorrow.
-

Call it overly twitchy... but after the last few weeks, I want to start afresh.
- 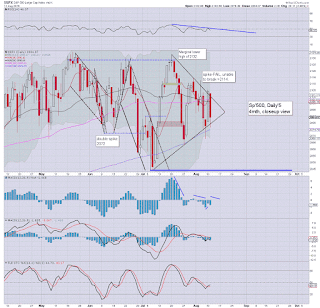 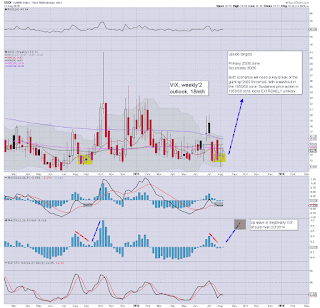 *PBOC have been meddling in the past hour or so... pushing the Renminbi back up back around 1%. Equity futures have clawed off the lows - we were trading under the equiv' of sp'2060... taking out the early July low.

Regardless of such meddling, some notable technical damage has been achieved by the bears in overnight trading.
--

Equity bears should be battling for a break into the 2050s this morning.. with a viable daily close in the 2040s.

*I will continue to have eyes on the VIX. A break above resistance in the mid 14s will be a key bearish signal.. .and offer the 16/17s.... late today or tomorrow.

After a few frustrating weeks, I am looking to close out my short positions this week... and then re-short on a bounce... later next week.

As the VIX weekly chart highlights, I'm most certainly looking for VIX in the 20s... and will want to be broadly long volatility from now until late September.

--
Update from an increasingly bearish Oscar

The issue on cycles is interesting, along with repeated bearish patterns for Gold.

I am very mixed on what Hoffman has to say. Some of it.. talk of the 'cartel' is the same old Gold bug nonsense. Some of the chatter about currencies though is worthy of consideration.

Overnight China action: There were a few vain attempts to hold minor gains, but the Shanghai cooled into the close, settling -1.1% @ 3886. It won't take much to spook the market into another wave lower.... first target is the 3200/3000 zone, secondary 2500.

By 2500 though, will the China leadership allow ANY stocks to be traded? I'd imagine they will have the 'malicious short seller' firing squads on standby this Sept/Oct'.

Long day ahead.. lets see if 16/17s by the close... along with sp'2050/40s.
Posted by Trading Sunset at 11:58:00
Email ThisBlogThis!Share to TwitterShare to FacebookShare to Pinterest

The US equity market has seen yet another failed rally attempt. The bigger weekly cycle is already offering a marginally lower high of sp'2105, and a lower low of sp'2076. With another reversal, near term outlook is back to outright bearish, first targets are Dow 17000, sp'2050/40s... with VIX 16/17s. 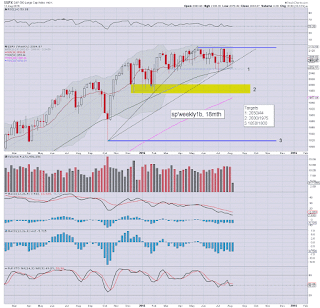 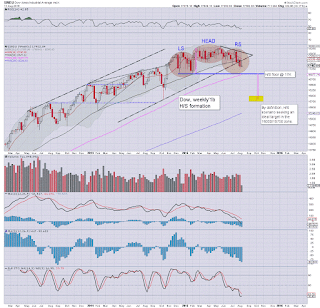 Even if you disagree with the notion of a H/S for the Dow, recent price action is clearly one of increasing weakness.

Obviously, the 17k threshold will likely offer very strong support to the Dow, and frankly, I don't expect the market to be trading under there in the current cycle.
-

Update from Mario at SMF

There is also a video discussing the Dow, if you check his YT channel.
--

The following video by Ron Walker was originally posted at the weekend.

Ignoring the fact that it doesn't take account of the 'Monday nonsense', there are a great many issues highlighted about the bigger monthly charts. In particular the issue of the 10MA... and considerations of the price structure/action in the early phase of the collapse wave of 2007/09.

Highly recommended for those who have the time, and want to consider the grander picture.
--

Wed' will see the latest EIA report, along with the US treasury budget... but Mr Market has little care for the latter.

*fed official Dudley will be speaking in the early morning.. and its possible a few remarks might be noticed by Mr Market.
-- 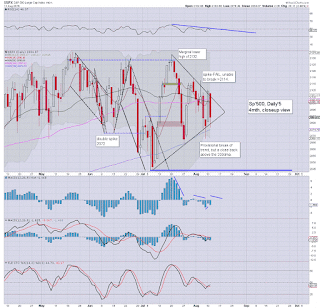 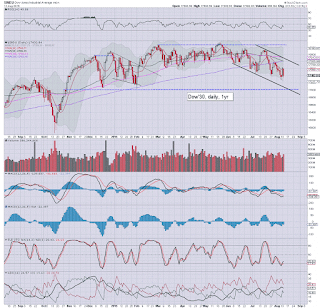 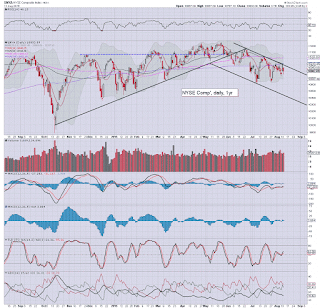 *it is highly notable that the Dow and NYSE comp' both saw 'death crosses' today.. where the 50dma broke under the 200dma. Such an indicator is very laggy, but still.. it sure ain't a bullish sign.
--

Considering recent price action, further downside looks due... next stop are the 2050/40s.
--