Volatility breaks the down trend

Despite most indexes closing a little higher, the VIX managed to break the 7 day run of declines, settling +2.2% @ 13.87. Near term outlook is for higher equities, and that should equate to VIX remaining in a rather tight 15/12 zone into next month. 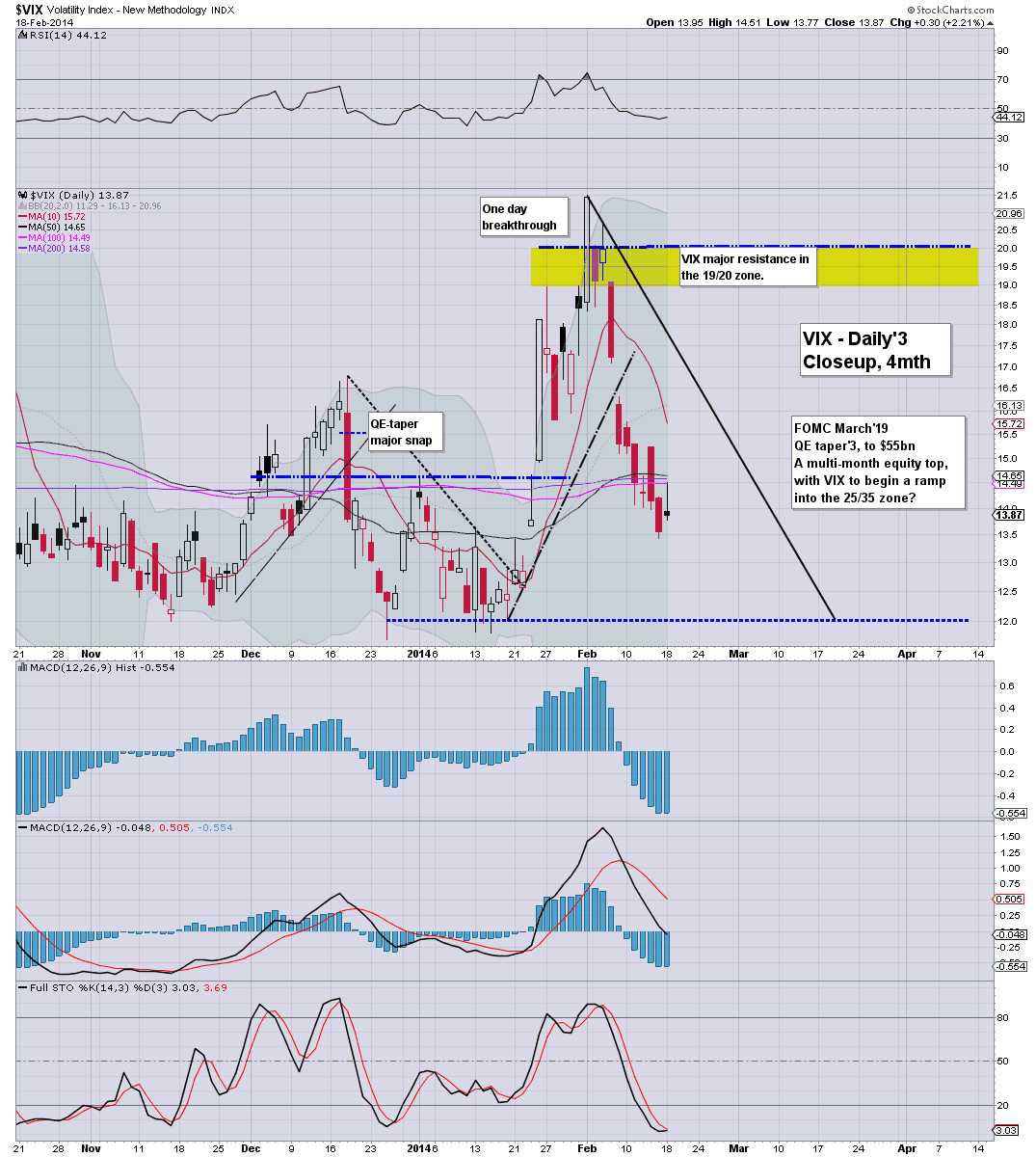 VIX looks set to remain under the key 20 threshold for some weeks, probably no earlier than mid April.
-- 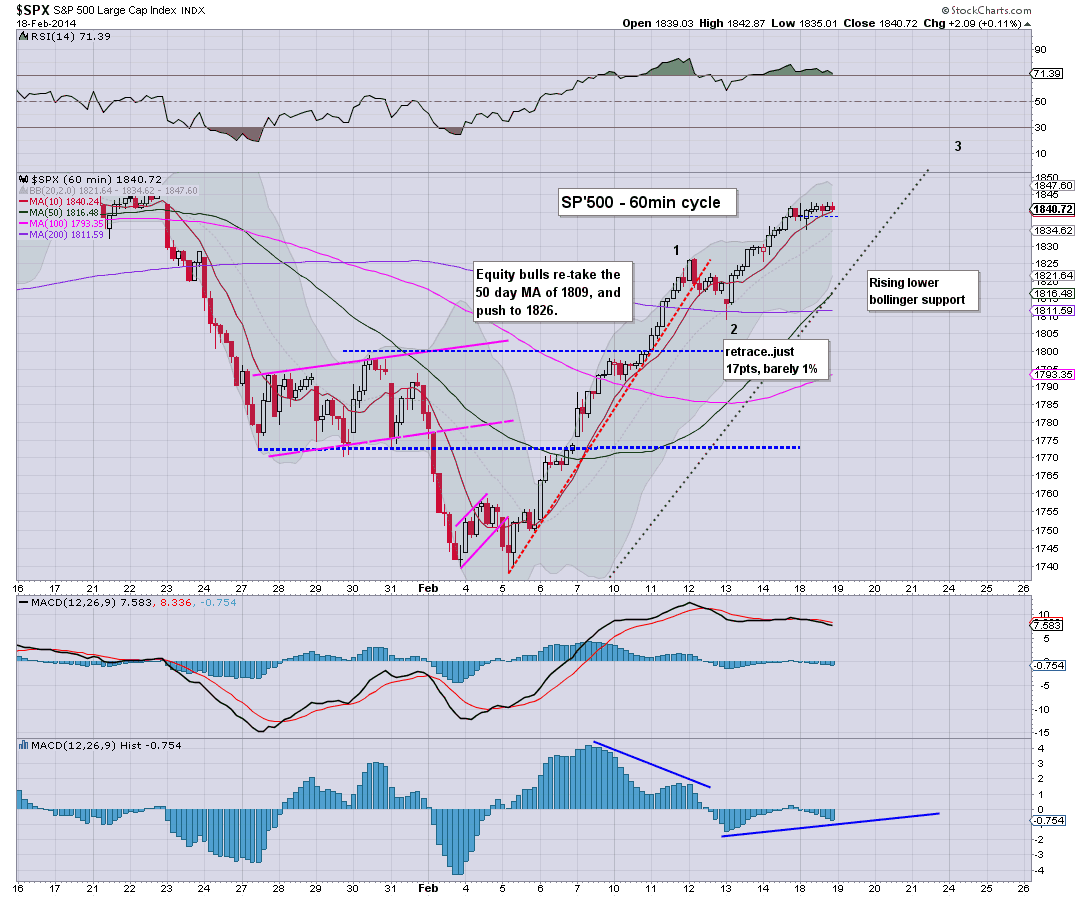 Little to add, on what was a very muted day.

3pm update - upside into the close

Considering the hourly index MACD cycles, there looks to be minor upside into the close. Any daily close in the mid 1840s will allow for an easy gap into new territory at the Wednesday open. Metals are holding gains, Gold +$4, but Silver up a much more significant 2.0%. 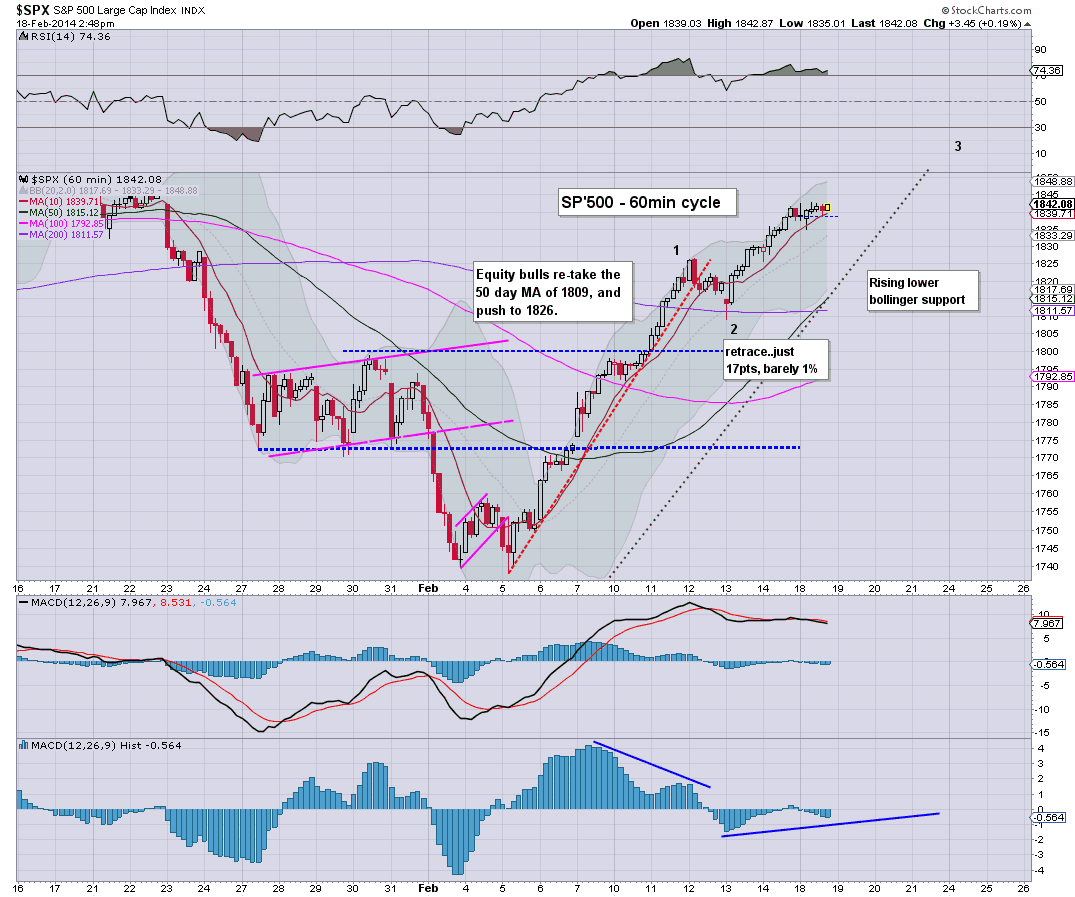 A very muted trading day. At least tomorrow will have a few things of note, esp' the FOMC minutes. I'd guess the market will merely use it as an excuse to rally into the 1855/65 zone.
-

For me, the only issue now is whether we just proceed 'straight up' to 1890/1910 or so..before end month. Certainly..at the current rate...it looks very probable.

All the bulls need is to break the micro double top high of 1850..and a whole truck load of short-stops will get hit..and we'll spiral higher into the coming weekend.
-

US indexes remain somewhat mixed, with a borderline significant gain of 0.9% for the R2K, whilst the Trans is weakest, -1.2%. VIX continues to hold minor gains of 3% in the low 14s. Metals clawing higher, Gold +$5 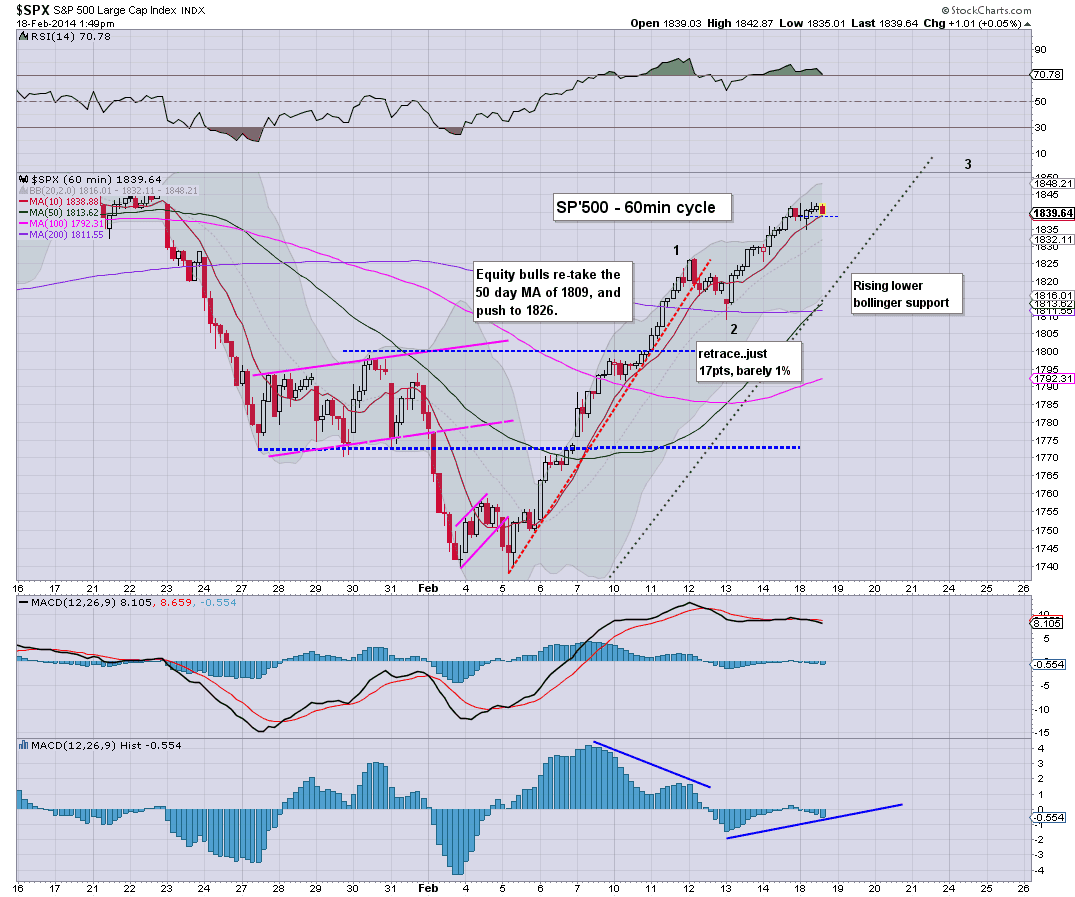 Hourly MACD (blue bar histogram) cycle is already negative, and will be close to flooring in the near term. There is clear viable upside across Wed/Thursday..into new historic territory.
-
Considering the price action, and with a heavy QE on Thursday, it would seem it is just a matter of whether the next major up day is tomorrow..or Thursday.....rather than 'if'.


2.27pm..the chop continues. Eyes on the VIX. A red close is still possible, which would be the 8th daily decline.

UGAZ +13%, hmm
Posted by Trading Sunset at 18:51:00
Email ThisBlogThis!Share to TwitterShare to FacebookShare to Pinterest

The sp'500 has climbed for 7 of the last 9 trading days, and looks set for new historic highs this week. The weekly cycles are offering the 1870s in the immediate term, the 1880/90s will be difficult until we move into March. VIX looks weak, with a viable 8th consecutive daily decline. 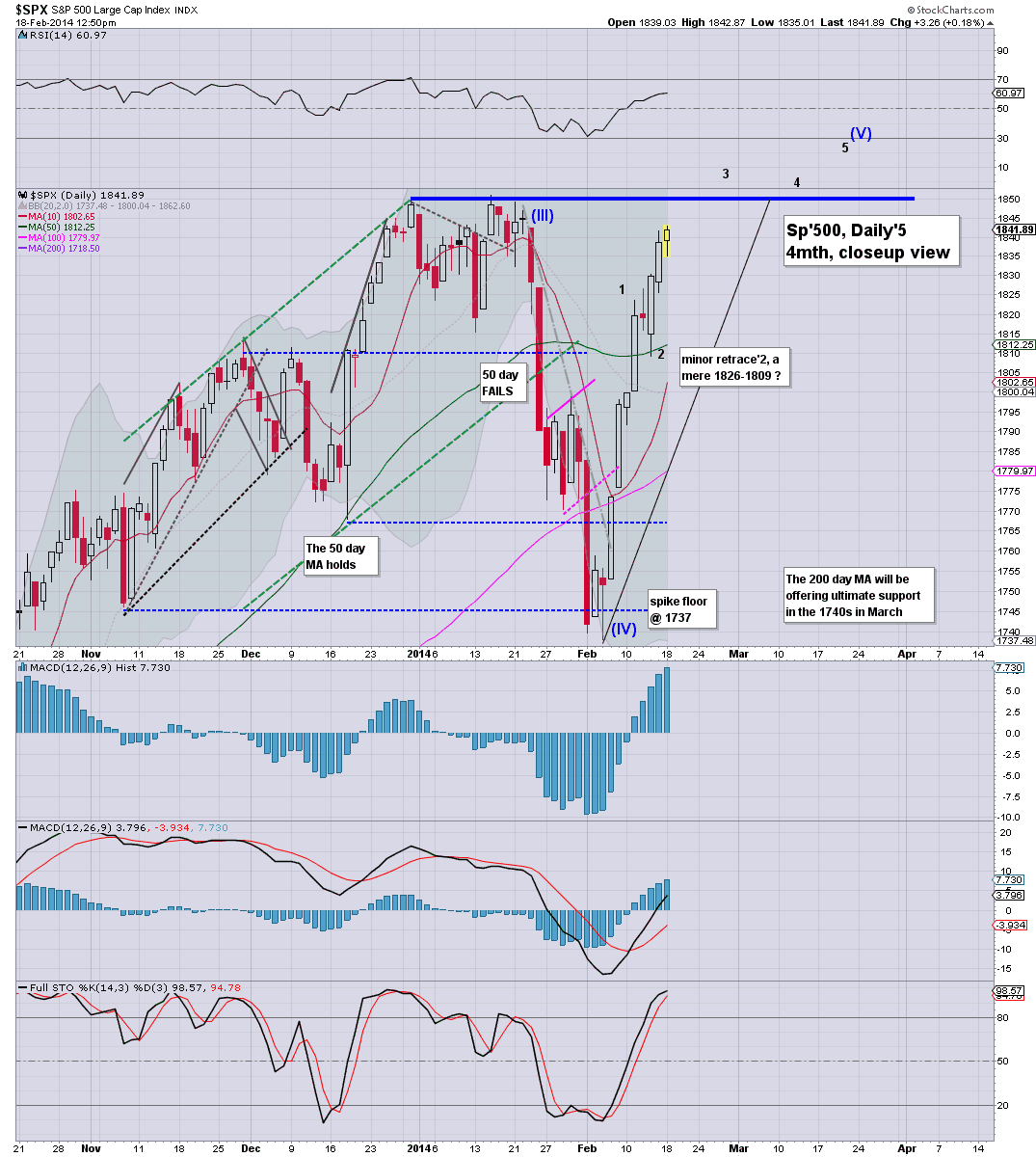 If we are in sub'3, then in theory, we should just go straight into the low 1900s...within 5-10 trading days, I realise that sounds like crazy talk to some of you out there.
- 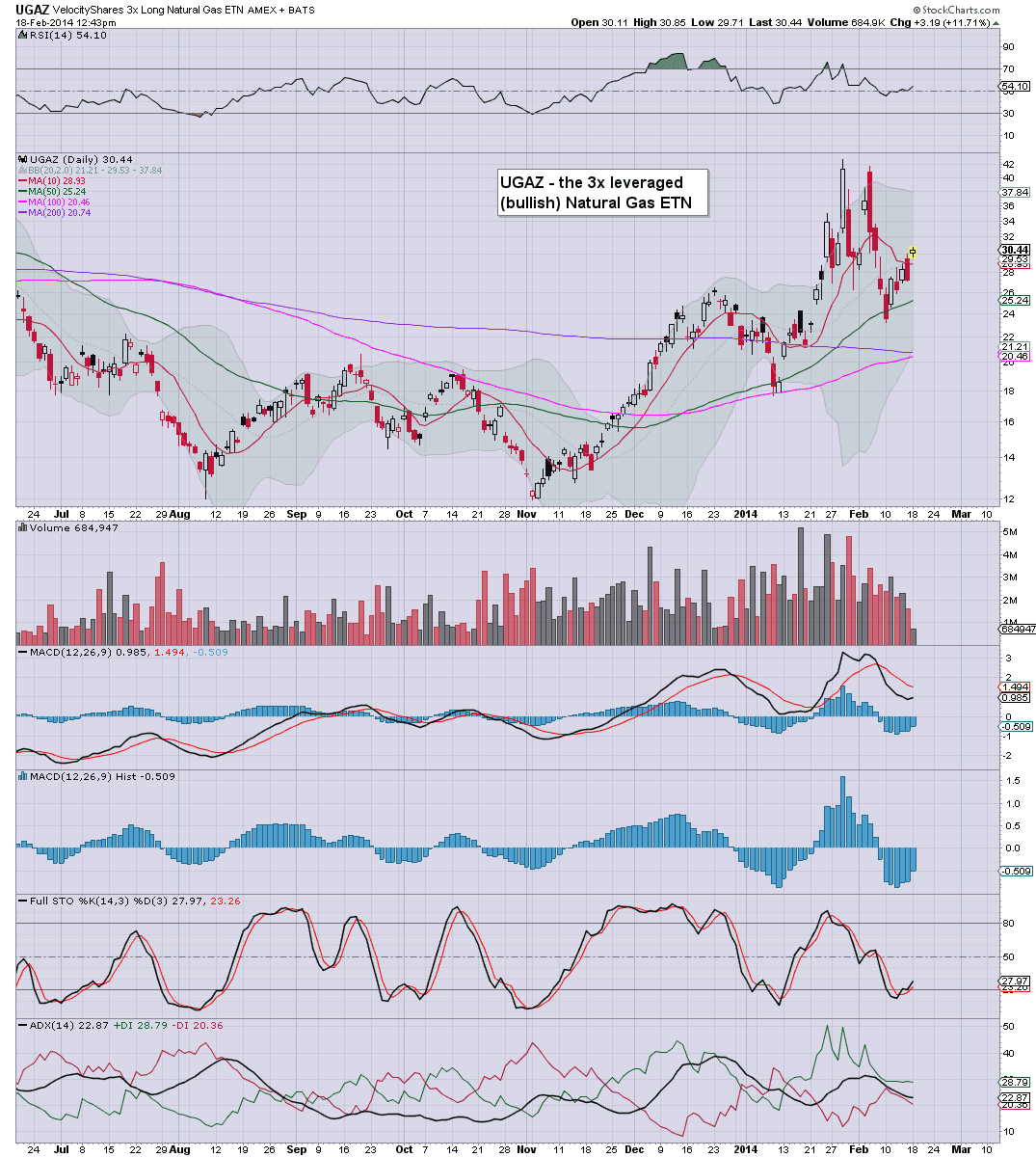 As it is, spring is coming...I'm sure noticing the lighter evenings already. Would make for an interesting short..once the current cycle is complete.
-

night falls..and the fireworks..begin. LIVE UKRAINE.
Posted by Trading Sunset at 17:51:00
Email ThisBlogThis!Share to TwitterShare to FacebookShare to Pinterest

Despite notable weakness in the Transports, the rest of the equity market is comfortably holding together, with slight gains. Precious metals continue to attempt to build further gains, Gold +$4. VIX is trying to break a 7 day run of declines, +3% in the low 14s. 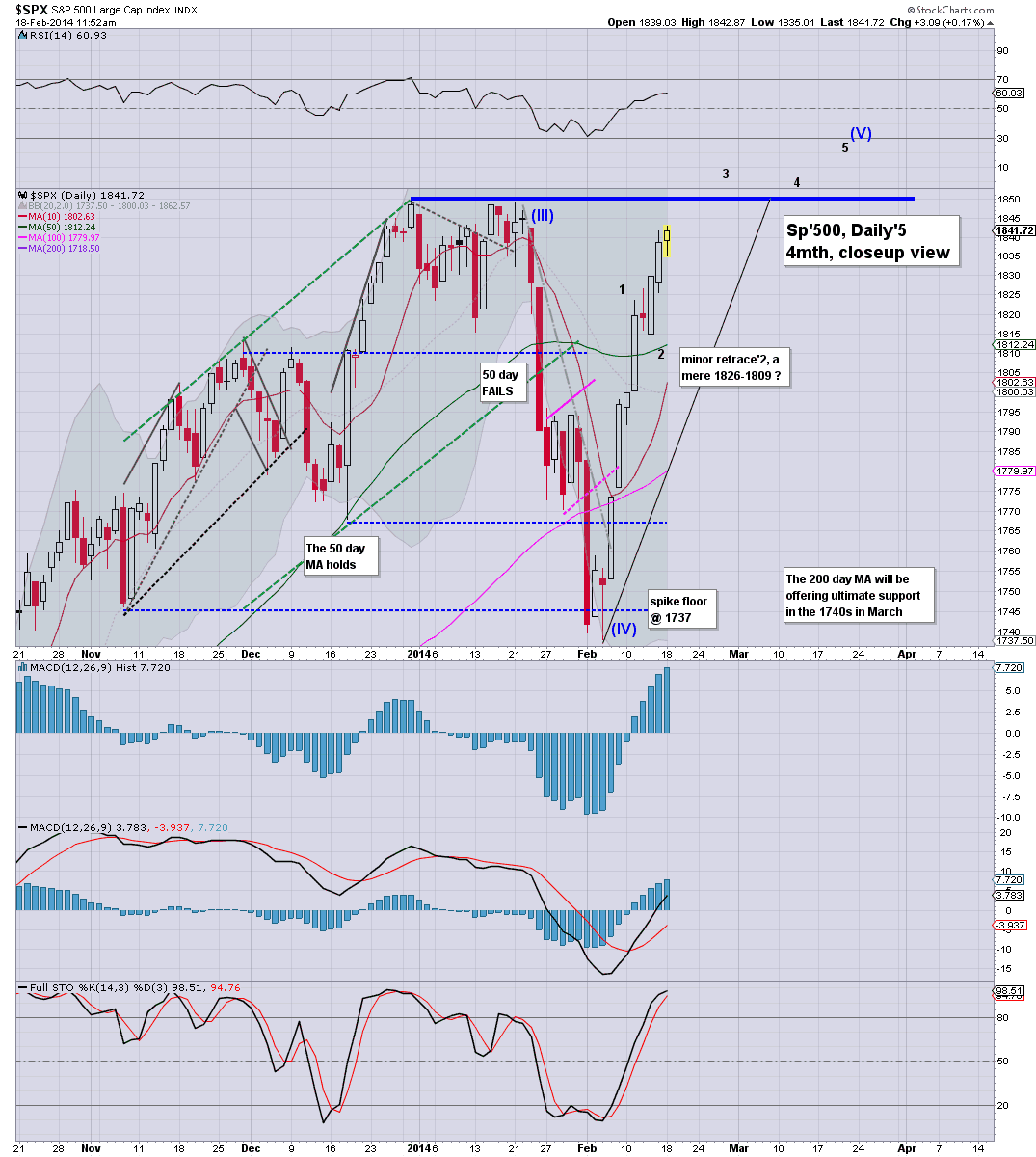 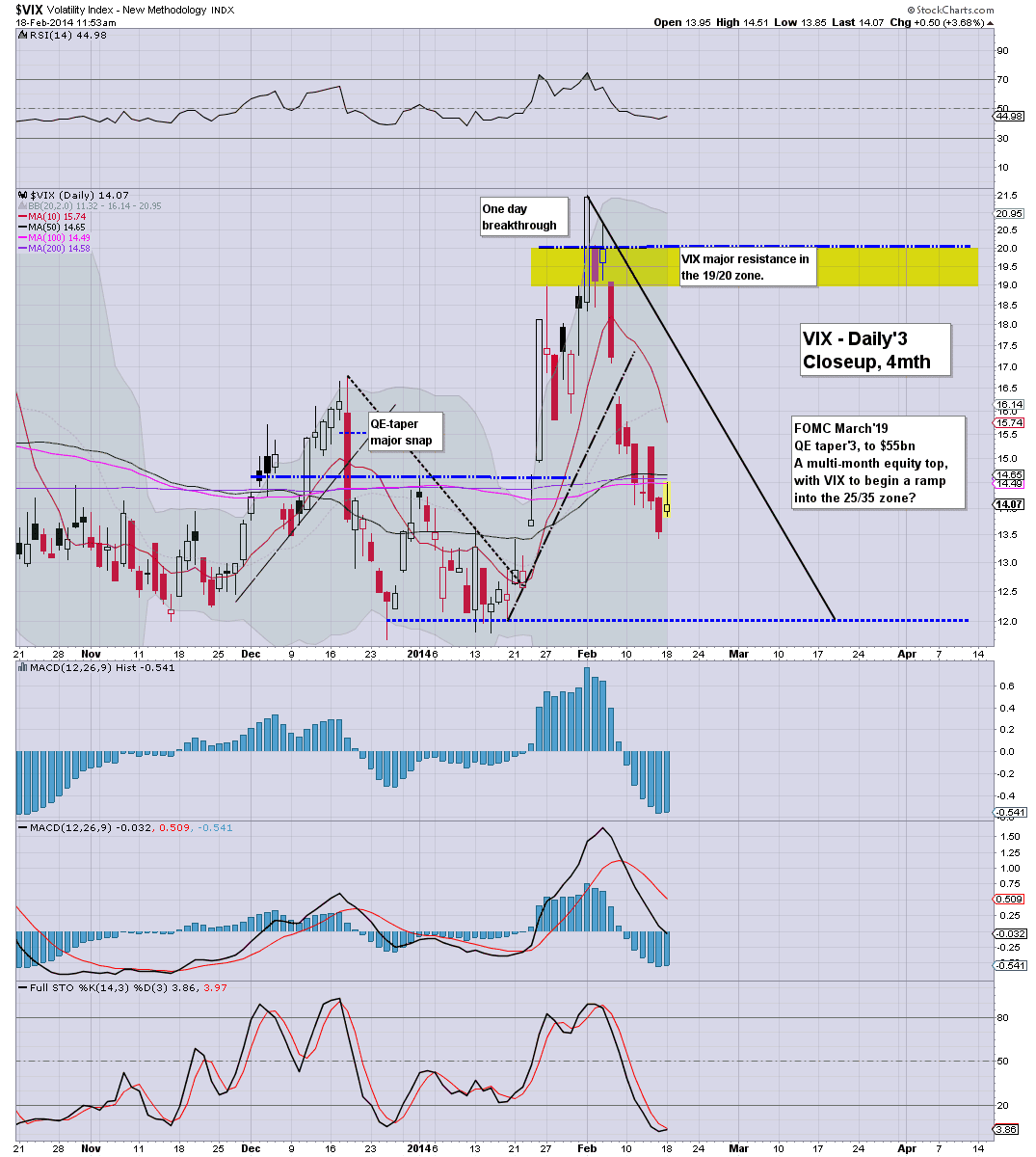 *VIX sure doesn't look so good for the bears, does it?
--

A pretty quiet morning, and aside from the tranports, everything is behaving itself as expected.

A break into the sp'1860s looks very viable later this week, most especially on Thursday when we have heavy QE of $4-5bn. Friday is opex, so...that will likely just be a bit of a chop fest.
-

--
time for tea.
Posted by Trading Sunset at 16:54:00
Email ThisBlogThis!Share to TwitterShare to FacebookShare to Pinterest

11am update - Transports warning of problems?

Whilst the broader market is seeing continued minor chop, there is some notable weakness in the Transports, -1.2%. A break <7000 would be a initial warning of broader market weakness. Precious metals are trying to build gains, Gold +$4 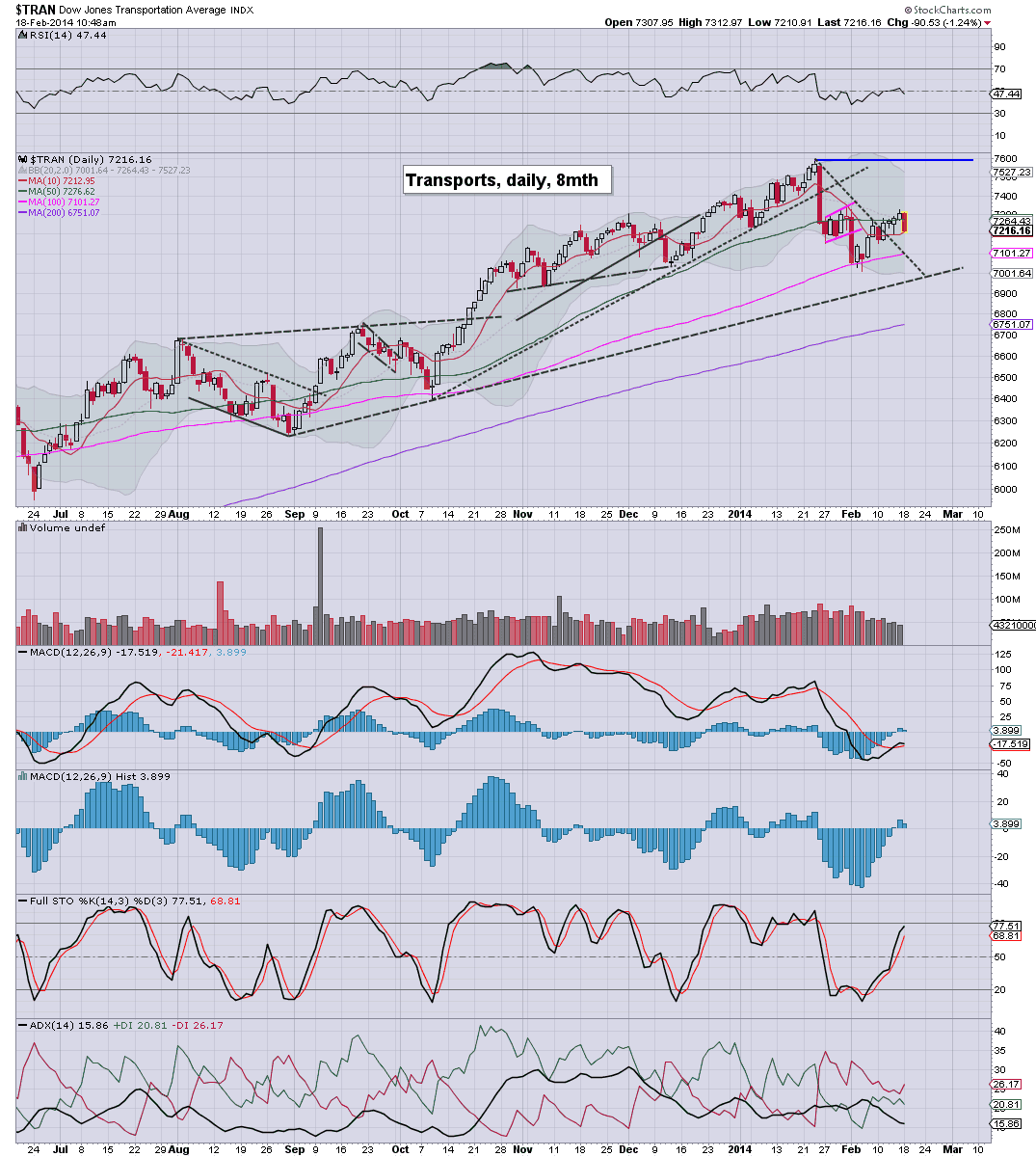 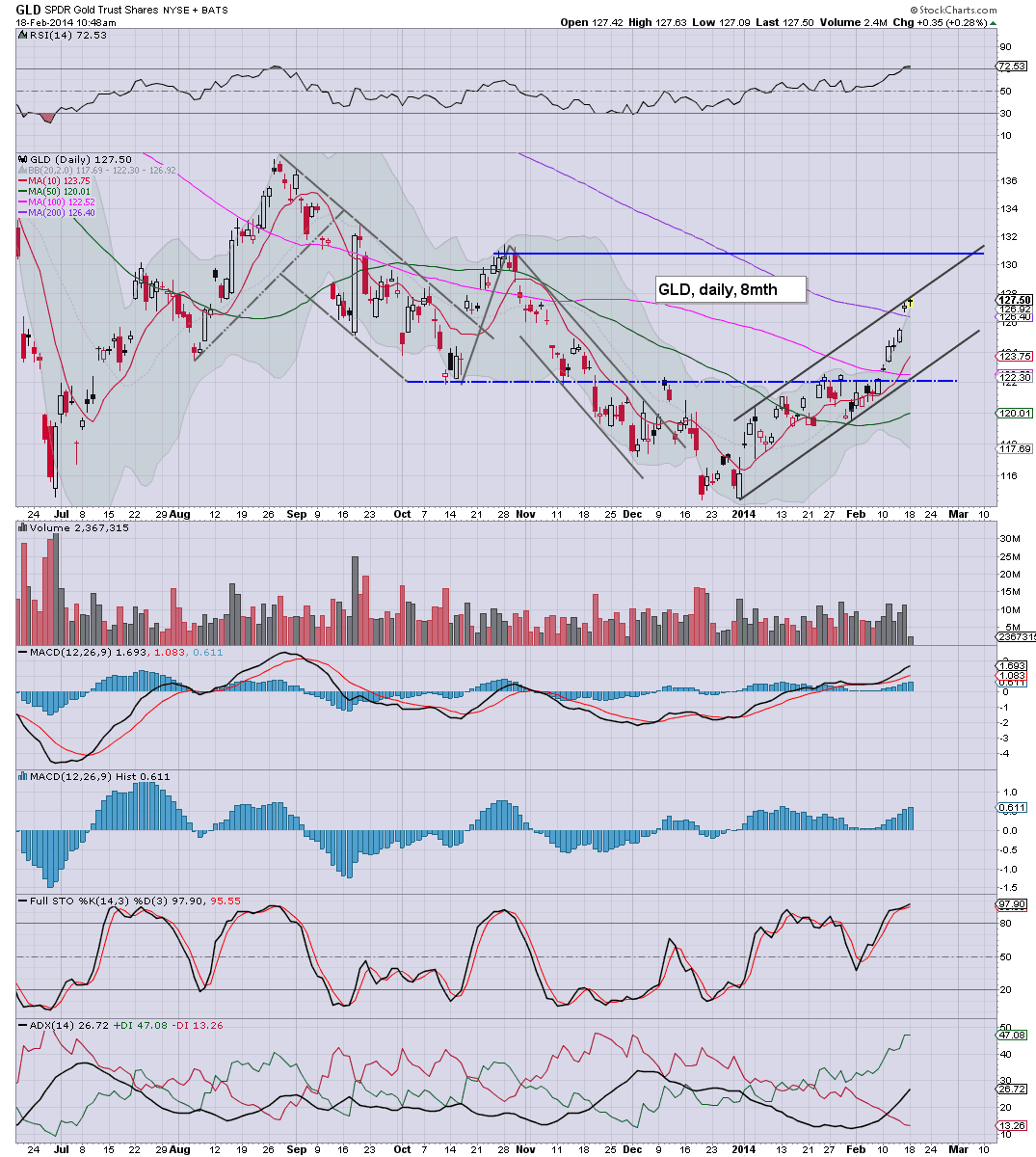 To be clear, the drop in the trans is interesting, but I can't take it seriously.

We have 2 significant QE this week, the price action is NOT at all bearish in the broader market.
--

..only another 4/5 weeks to go...I'm guessing.
Posted by Trading Sunset at 15:50:00
Email ThisBlogThis!Share to TwitterShare to FacebookShare to Pinterest

10am update - you already had the retracement

The market opens with some minor mixed chop, but underlying upside pressure is there for anyone to see. Sp'500 looks set to break new historic highs, whether today, tomorrow..or later this week, does it matter? Weekly charts are absolutely clear, we're still broadly pushing upward. 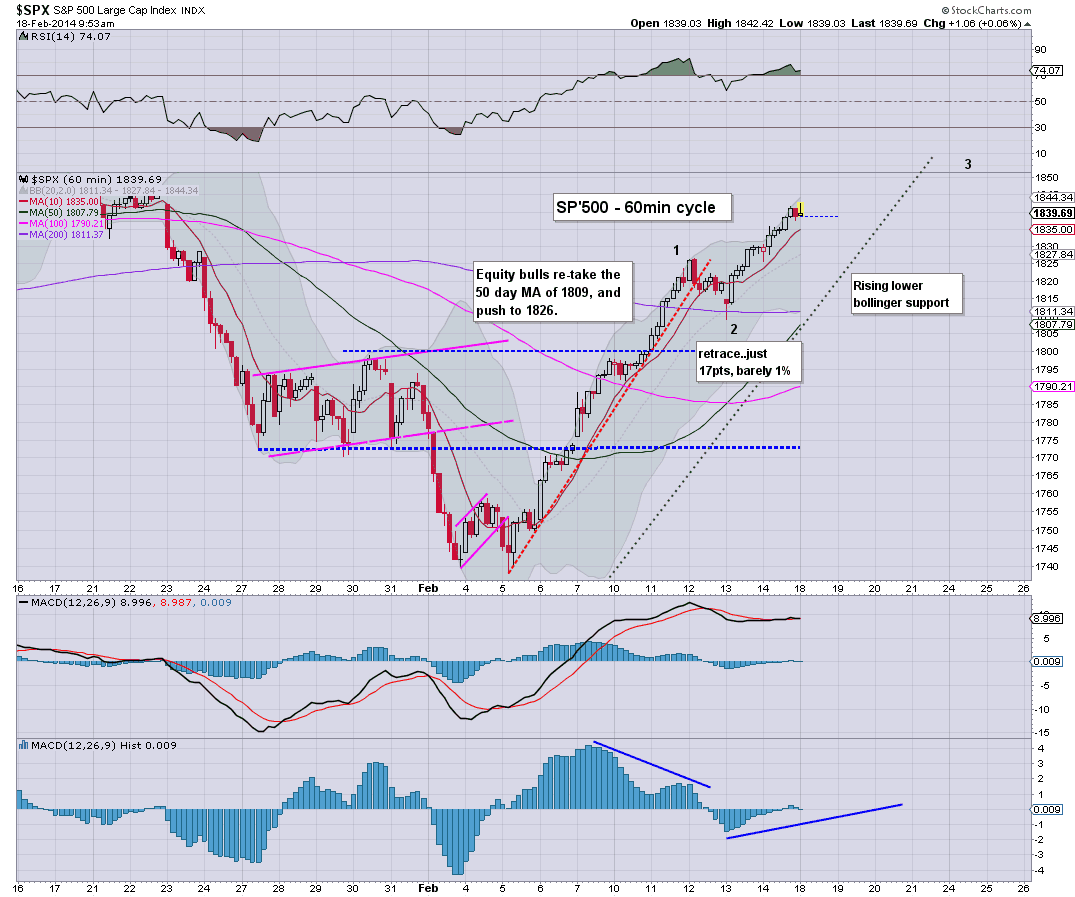 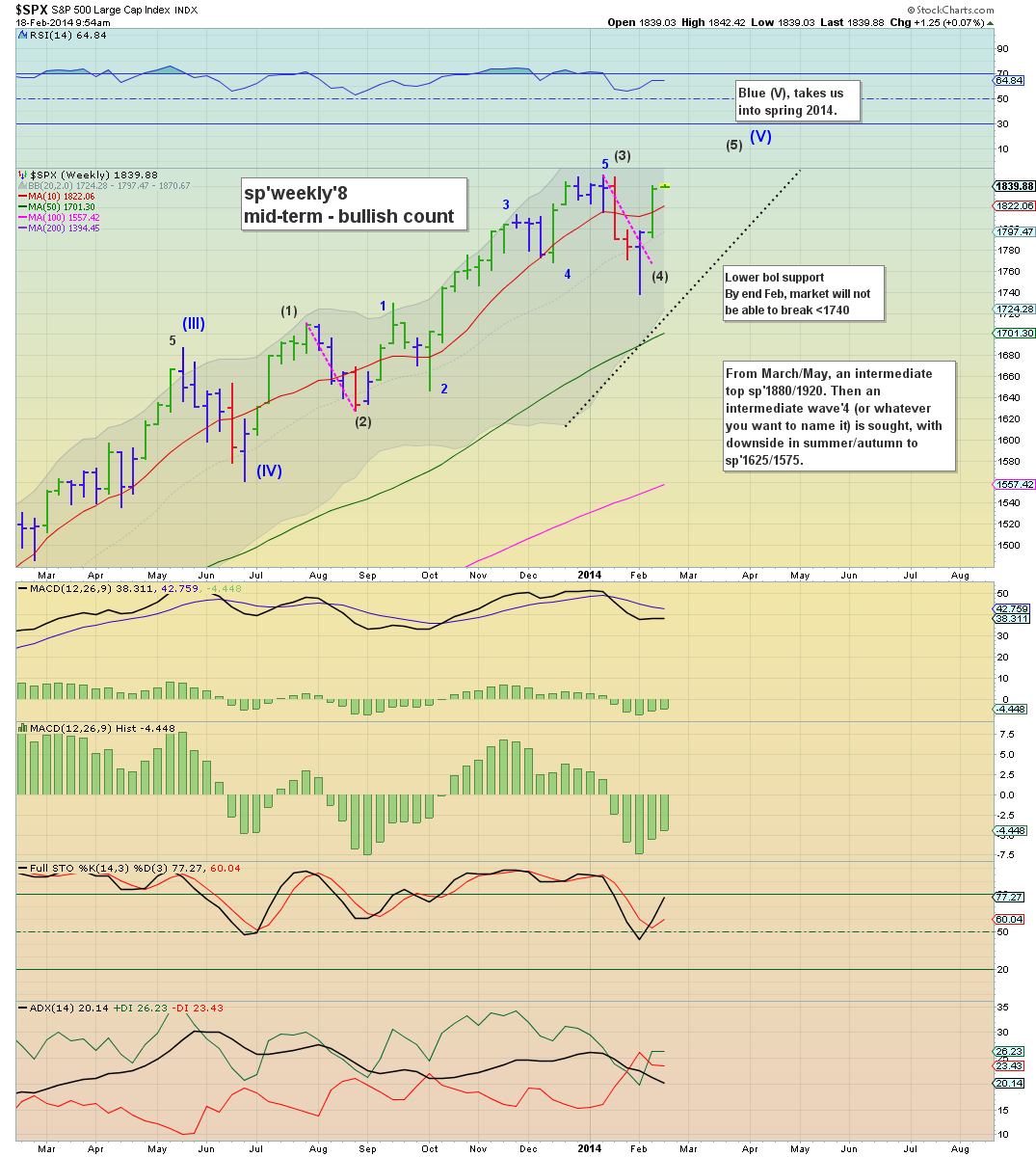 This market remains fuelled by QE..and this morning will see $2-3bn of pomo fuel...bears have no excuse to note be side stepping this. The fact there is HEAVY QE of 4-5bn on Thursday...should make anyone considering the short side just walk away for the entire week.
--

Over in the Ukraine..its getting rowdy as the sun sets. LIVE feed
--

No real downside pressure, QE money is going to be a problem ALL this week.

notable strength: UGAZ +12%
Posted by Trading Sunset at 14:55:00
Email ThisBlogThis!Share to TwitterShare to FacebookShare to Pinterest

Good morning. Futures are a touch higher, sp +2pts, we're set to open at 1840. Metals are a little lower, after swinging around form initial gains, Gold -$2. With two sig' QEs in this shortened trading week, bears face the usual problems. 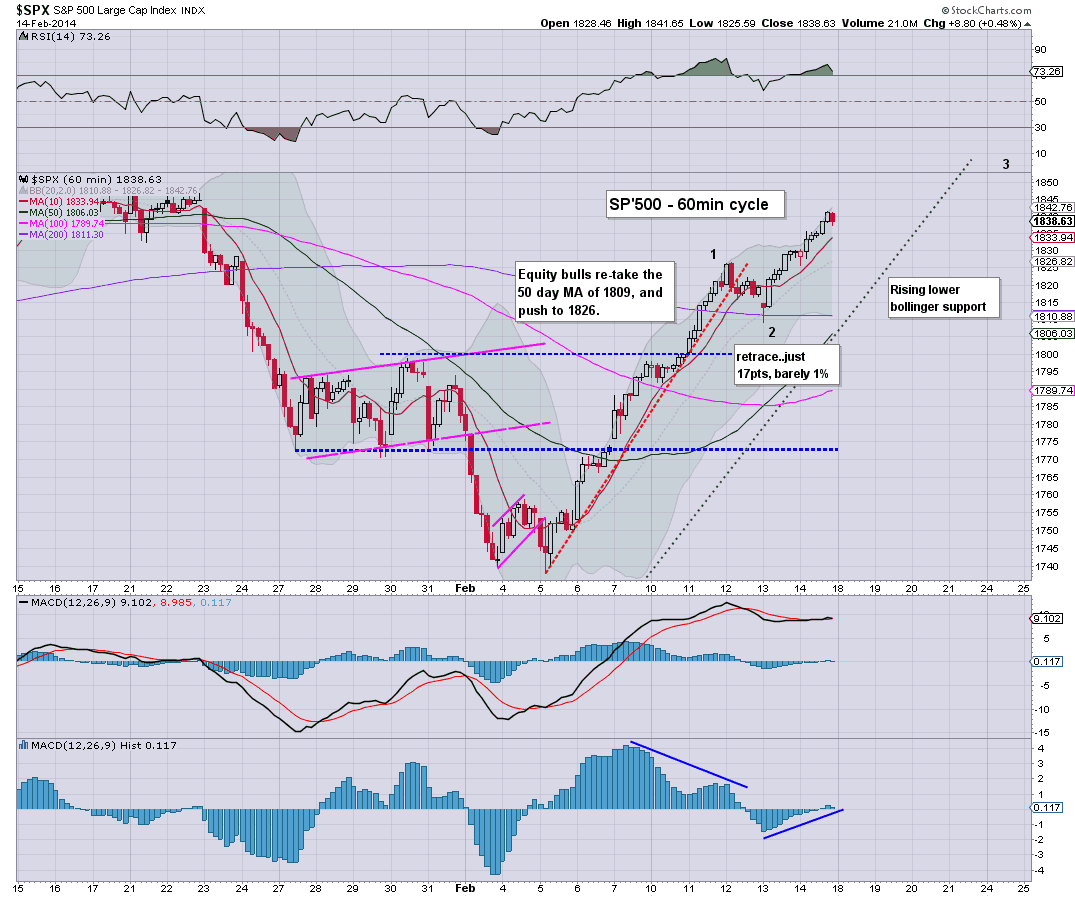 Considering the QE and the recent price action from the sp'1737 floor, I'm guessing we'll soon be trading in the 1850/60s..likely by the end of this week.

Notable early movers...
TSLA +3% @ $204 - earnings are due this week, possibly later today
UGAZ +12% @ $30
Posted by Trading Sunset at 13:19:00
Email ThisBlogThis!Share to TwitterShare to FacebookShare to Pinterest

Another year... or two

Regardless of any significant retracement this summer, the broader trend in US equities, looks set to remain strongly bullish. With Yellen likely to ramp the printing on almost any sign of economic weakness, US equities will probably be much higher by late 2015/early 2016. 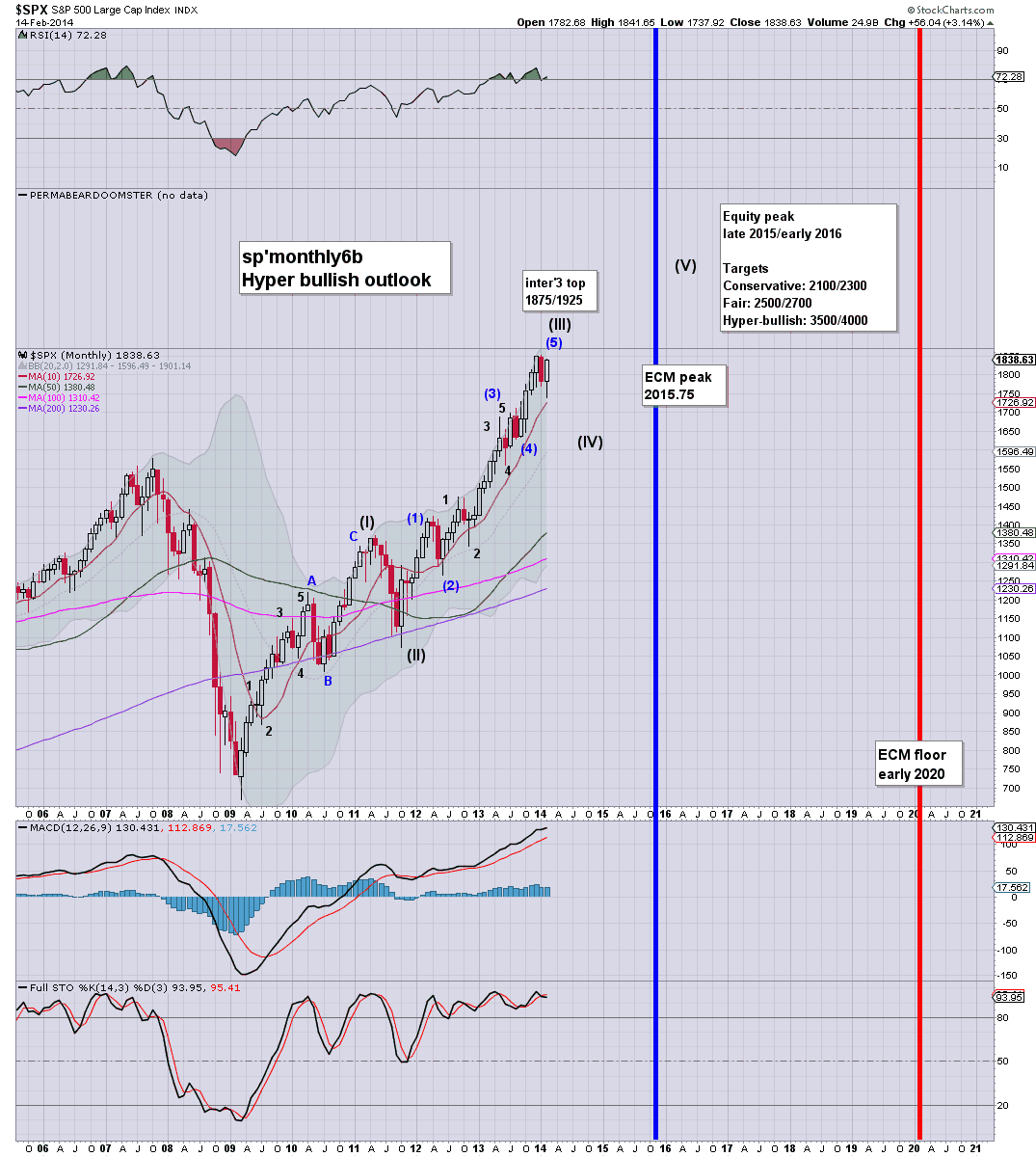 The above monthly chart links in with the weekly and daily charts that I have been highlighting since last summer.

Regardless of how you want to label the price action since the 2009 low, we are unquestionably overbought, having ramped from sp'1074 to 1850 since Oct'2011. The US equity market is more than due a sig' correction, not 10%, but something on the order of 15/20%, perhaps even a little more.

Frankly, I'll be utterly bemused if we don't at least trade down to the low 1600s this summer.


US t-bonds - another clue

The following chart sure is a kooky one. It is a mere extrapolation of the 2003/2006 MACD cycle climb, onto the 2012 low. That gives a cycle target of late 2015, which is interestingly where Armstrong's ECM cycle also maxes out. 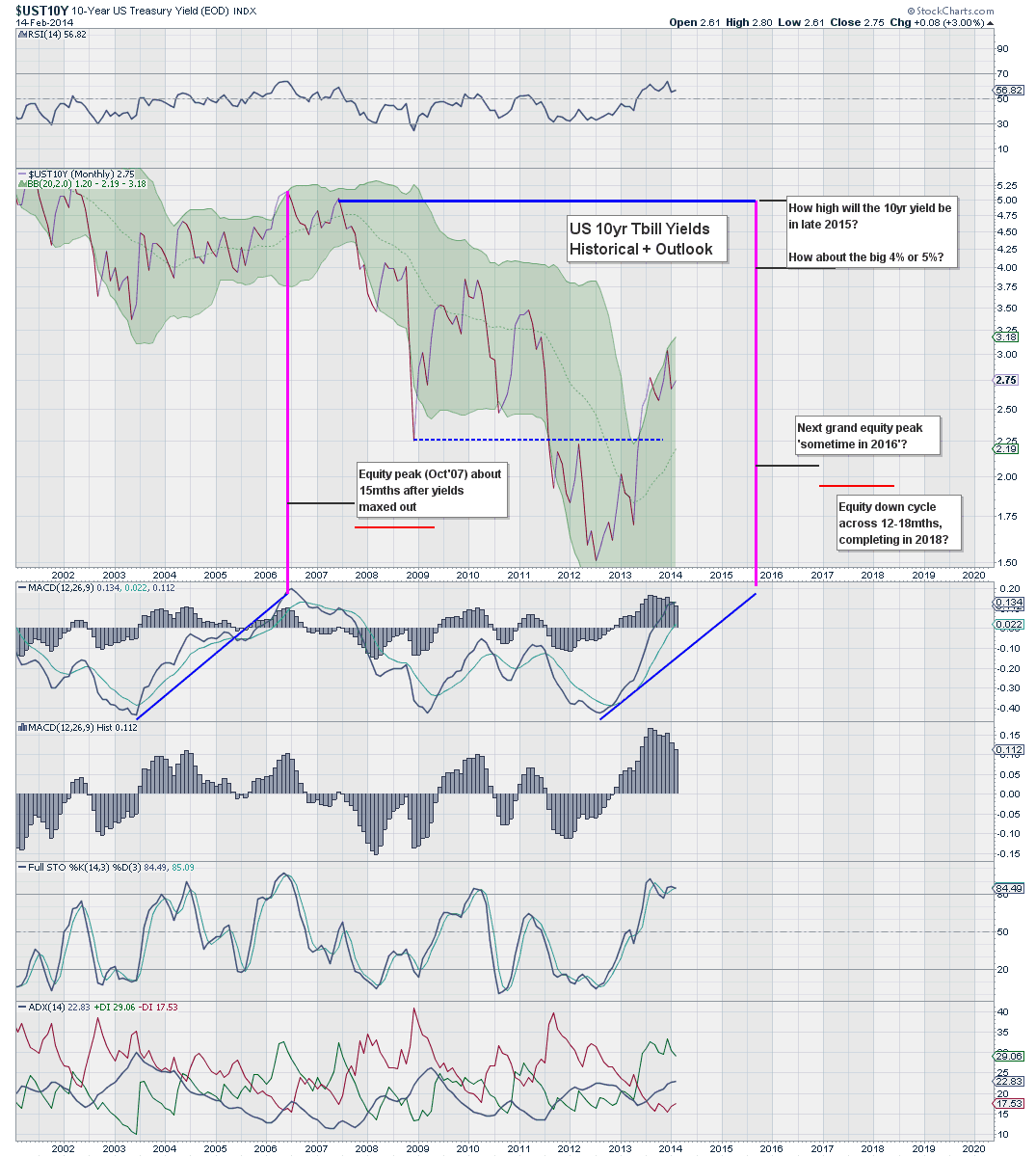 Yes, all cycles are unique, but on any basis, we're well on the way to completing the current multi-year climb in rates. With the break >2.75, I'm resigned to an 'easy' upside target of 3.75/4.00. However, that might not be until next year. First, there is viable retracement to 2.25/00 - which might equate to where the equity market might be flooring this summer/early autumn. Sub 2% does not look viable, even if Yellen ramps the printing later this year.