With the Dow, SP, and R2K closing the week at new historic highs, the VIX naturally slipped lower, -5.45% @ 12.85. Similarly, across the week, the VIX declined by 5.6%. VIX remains at utterly complacent levels, but then..the Fed is still throwing 85bn a month at the US markets. 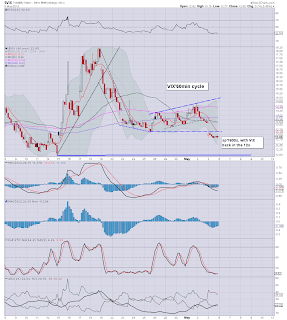 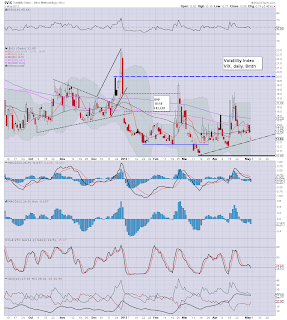 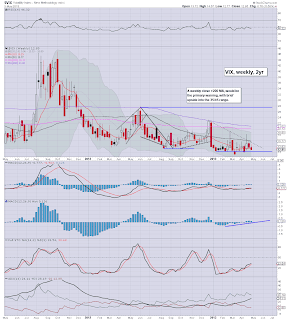 Suffice to say, VIX back in the 12s represents a market that is entirely fearless. It is a market that knows the QE-POMO is very likely to continue for at least another 3-6 months.

Of course, if that drip feed of free money comes to an end, this market is going to unravel rather quickly.
--

In the meantime, it now seems unlikely that we'll be seeing VIX break into the 20s. Indeed, if the indexes merely battle higher into the late summer, then the real interesting question is just how low will VIX be then ? Are we looking at VIX <10 ?

--
a little more later...on those historic indexes
Posted by Trading Sunset at 23:00:00
Email ThisBlogThis!Share to TwitterShare to FacebookShare to Pinterest

The bulls close the week at new historical highs for the Dow, SP'500, and the R2K. The market has broken out, and it would appear a major new up wave - that will endure until Aug/September has now begun. Incredible, bizarre, twisted, but that..is how it is. 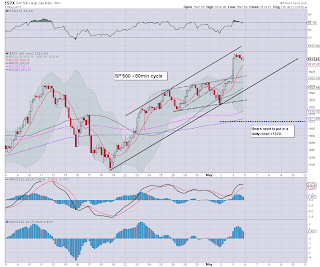 What to say about today?

The 1% decline on Wednesday is now a distant..and sadly...laughable fading memory.

New highs can NOT be dismissed.
--

I realise many won't like hearing it, but that is how I see it.

Regardless, I do wish you a good weekend.
--

*next main post..late Saturday, probably detailing the US monthly index charts.
Posted by Trading Sunset at 21:02:00
Email ThisBlogThis!Share to TwitterShare to FacebookShare to Pinterest

Regardless of whether this is a touch of weakness into the close, the bulls have had a massive victory this week. Not only did the market just ignore a recessionary PMI number, but the underlying jobs data (hours worked) was lousy. QE-POMO remains the medicine of choice. 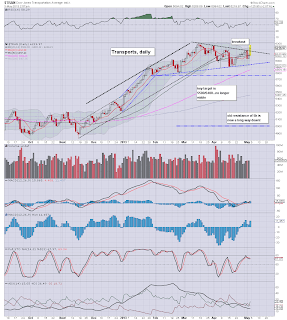 Prices are cooling off a little this afternoon, but its still a clear breakout, but then, it already was yesterday for both the Sp'500 and the Nasdaq.


VIX rolling over on the weekly MACD cycle.. 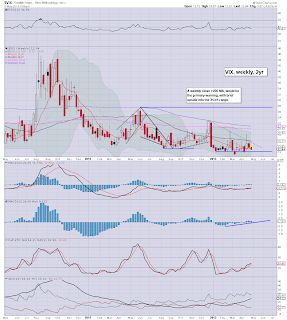 3.28pm...market still holding most of the gains. Yes, the VIX is ticking higher a bit, but its broken.

Oil is cooling off, a brief pull back on Monday morning seems likely. 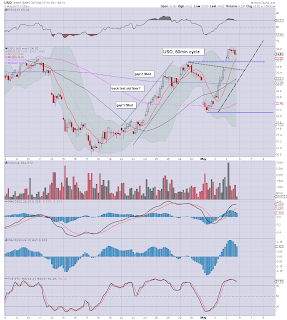 I will look to go LONG oil next Monday.  All recent down targets are revoked.
--
Posted by Trading Sunset at 19:59:00
Email ThisBlogThis!Share to TwitterShare to FacebookShare to Pinterest

The US market is very comfortably holding gains of around 1% on the main indexes. Far more significant though are the gains for the Trans and R2K, which are higher by 2.4 and 2.0% respectively. VIX is broken, and remains in the 12s. 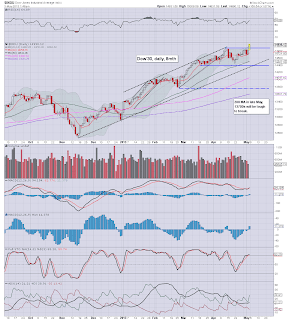 Very little to add at this point.

Aside that there is no point on focusing on the smaller cycles now. Today is clearly a breakout day, and the notion that April is the 'death knell for the market' should be thrown out.

--
I realise some of you will be bemused, even outraged, at my turn of trend outlook. Yet, I'm just going to keep on calling it as I see it.

Bears had a chance to break lower - as we saw on Wednesday, but they just can't string together a series of down days. Its that simple.
--

I remain on the sidelines, but will look to go long Oil, sometime next Monday.
Posted by Trading Sunset at 18:54:00
Email ThisBlogThis!Share to TwitterShare to FacebookShare to Pinterest

Market is comfortably holding the morning gains, and bulls can now look forward to at least a few months of very significant gains. VIX is broken in the 12s. Copper is +6%, Oil is +1.5%, but the precious metals are so far failing to join the party. 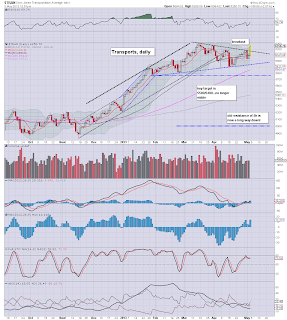 There is zero reason to expect the current gains to significantly erode into the close.

Today is day'1 of a breakout.

More on that over the weekend though.
--

back later
Posted by Trading Sunset at 17:53:00
Email ThisBlogThis!Share to TwitterShare to FacebookShare to Pinterest

Despite the market decisively breaking out - especially apparent in the Trans/R2K, the coming weekend will be filled with another barrage of top callers. No doubt they will continue to raise their ceilings across June...July....August...and so on. 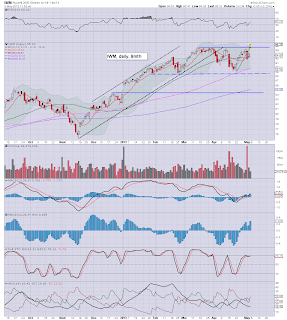 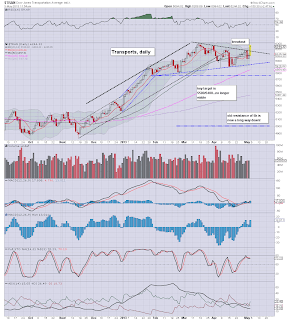 Its been a difficult week, but its going to end in a rather entertaining way. Just scroll through all the chart/blog pages this evening/weekend, and you'll see a whole new set of top callers.

This will be truly ironic, since today is clearly a BREAKOUT. It is merely day'1 of a grand new wave higher, one that looks set to continue for many months.
-

Yesterday is even more amusing in retrospect. Bears get a mere 1% on Wednesday, only to see the Sp/Nasdaq close at new highs the very next day, lol.

..and here we are.. with absolutely decisive breakouts for the ENTIRE market.

--
Without question, the Bernanke should be congratulated for today's great progress. Incredible, and all for the price of just 85bn a month. An absolute bargain, considering the US economy of 15 trillion per annum.
Posted by Trading Sunset at 16:58:00
Email ThisBlogThis!Share to TwitterShare to FacebookShare to Pinterest

The market has decisively broken to the upside. Whether daily, weekly, or monthly cycle, we have breakouts on all indexes into new territory. All bearish outlooks should now be dismissed. Any 'big/serious' bear money will have been short-stopped out by now. 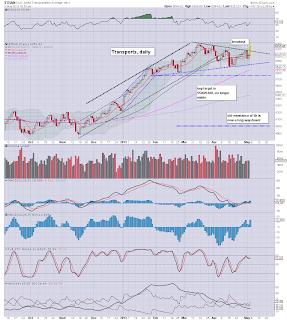 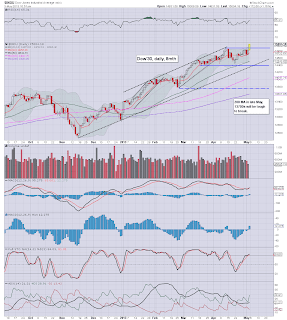 Market has broken to the upside, and its a VERY decisive break.
--

*I have abandoned remaining short positions. There is simply no justification for being short >1597

10am update - waving the white flag

Market is breaking away. There is simply nothing bearish left, even the Transports is back above 6200. The VIX is in the 12s. Oil and Copper are soaring, and there is no longer any reason to expect May to be bearish. After all, every day..is a POMO day. 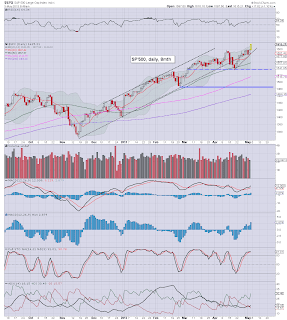 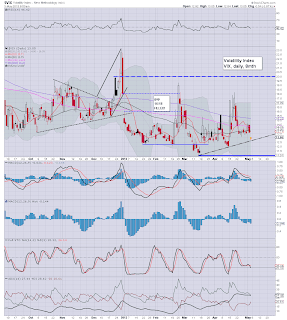 *I'm out, have abandoned all short positions, very large losses, but perhaps even more annoying...its again been a complete waste of my time.
--

Just why the hell would it stop here?

The Fed ain't going to stop QE next week.
Or next month
Or this year
Or next year
Or the year after

Just how stupid are the bears...not least yours truly?
--

Unquestionably, anyone still holding short positions above the recent key high of sp'1597 is not only stupid, reckless, but just plain deluded. Almost as deluded as the bull maniacs who think the underlying economy is still on the 'road to recovery.

Check out the transports...which was the ONLY bearish chart last night, and now that is wrecked.. 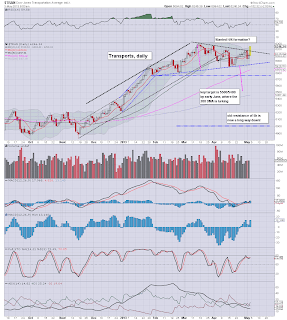 *I'll remove all the labelling soon, but I wanted to post it before it gets wiped

The break into the 6200s is a VERY decisive bullish breakout
-- 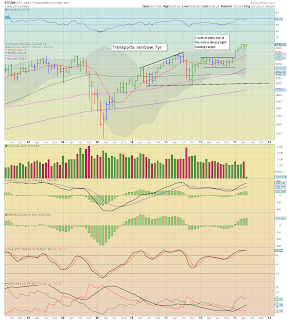 *Oscar Carboni had a rough target in the low 7000s for the Trans...and right now, there seems no reason why they can't be  hit. 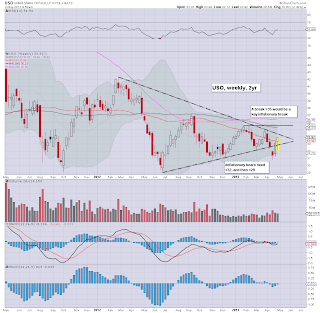 A break >35..barely $1 away, would suggest a MASSIVE price up move across the summer.
-

The notion that this is going to end in the 1620s is shear nonsense..

Ohh, but the EW counters sure will be touting a top this night in the 1620s. Good luck with that!
--

A rather simple extrapolation, if Trans 7000s, then sp'1800s...within the next few months.
Posted by Trading Sunset at 14:53:00
Email ThisBlogThis!Share to TwitterShare to FacebookShare to Pinterest

Good morning. Futures are flat, we're set to open around sp'1597. However ,the monthly jobs data is due, and that will likely swing one direction..or the other. Precious metals and Oil are moderately higher. 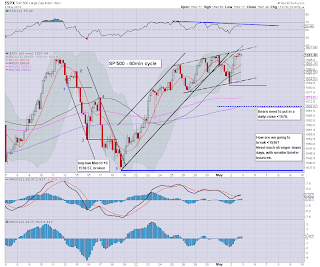 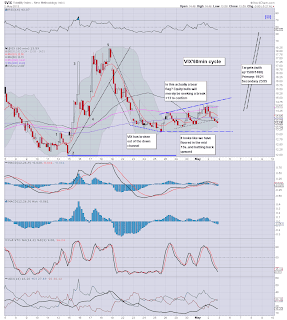 Well, lets see what nonsense the BLS decides to quote this month...

So, bulls have the disneyland figure they wanted.

Congrats to the bull maniacs. They win..again.
--

Just how stupid are we? Fed Qe-POMO every day, and we're still fighting it, after 4 years.
Posted by Trading Sunset at 13:17:00
Email ThisBlogThis!Share to TwitterShare to FacebookShare to Pinterest

Weekly charts back to bullish

Once again the bears are unable to string together two consecutive down days. Today's new highs in the SP'500 and the Nasdaq were again a clear sign that 'normal service' has resumed, and baring a weekly close in the low sp'1580s, the weekly charts are back to outright bullish. 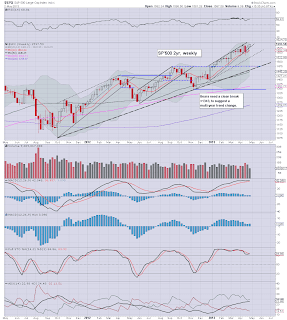 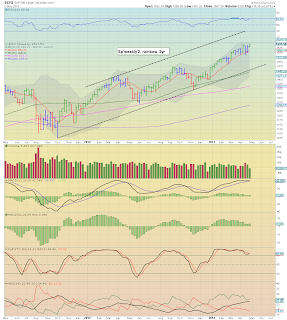 Obviously, today was a real disappointment. I had expected some kind of bear flag to play out across the day, but the market just kept on pushing higher, negating any hope of that idea playing out.

The original target of sp'1480/70s still stands, but that just looks increasingly difficult to hit. Baring a sharp fall tomorrow (at least 2%), on what I think might be another poor jobs number, the market looks set to just melt upward.

Friday will see the big monthly jobs number, but after today's renewed strength, I am almost resigned to the market still rallying, whether good or bad data. After all, if its a bad number, then not only will QE continue, but then the chatter will turn to talk of 'increased monthly purchases' at the next FOMC of June'19.

What is clear, the Feds QE program has destroyed ALL 'price discovery' in what remains a rather sick, nasty, and twisted equity (and commodity) market. When it all implodes, as it inevitably shall, I can only hope the Chairman is there to clean up the mess.

The market opened only marginally up, but it battled consistently higher across the morning, and held significant gains into the close. The SP' and Nasdaq both made new post 2009 highs. The only index that marginally lagged was the Transports, which is still 1% below the Tuesday peak. 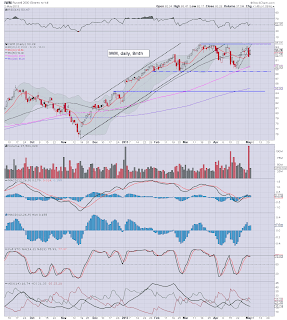 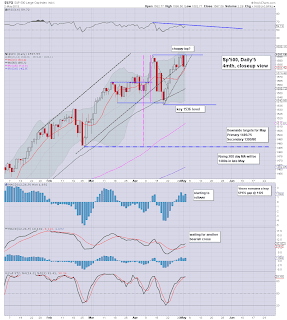 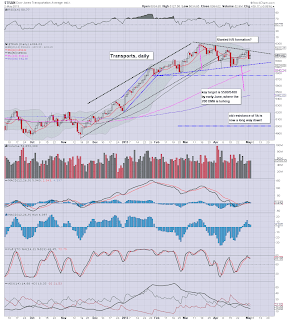 What can be said about today?

So, Wednesday closed around 1% lower for the headline indexes, with the Trans/R2K -2%. Yet, today..most of those declines were fully clawed back..and we even had the SP & Nasdaq breaking new highs.

Its hard to know what to say, other than its probably a case of 'normal service resumes'. Fuelled by the regular daily QE-POMO, and aided by those HFT algo-bots. I'm unaware of what the trading volume was today, but I'd guess it was lower than yesterday. After all, the only time there is significant vol' is on a down day.

The transports daily chart is really the only one left that the bears can arguably suggest is still bearish. It has a possible H/S pattern, and the target would be a natural 5500/5400 - equating to sp'1480/70s.

Right now, those downside targets look very difficult to reach, even on a 4-6 week basis.

Unless the bears can see VERY significant downside of at least 2% tomorrow, it now appears the sp'1620s will instread be hit first.