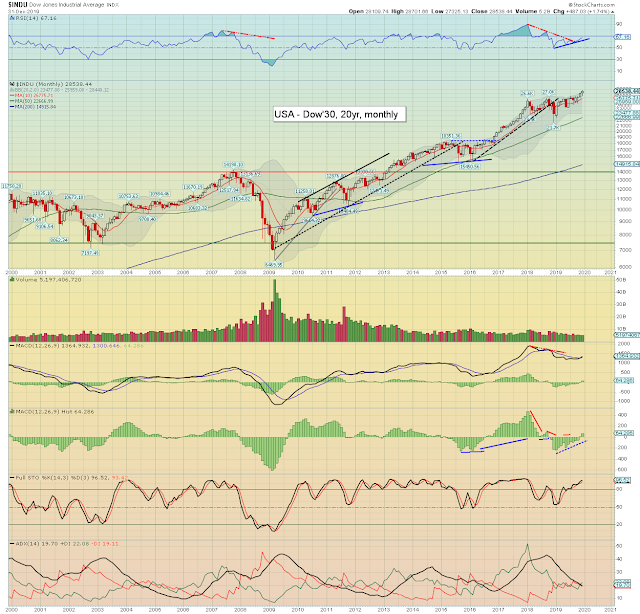 Note the macd (green bar histogram) cycle, as price momentum increasingly favours the bulls. RSI 67s are the highest since late 2018. Next key target is psy'30k, and then Fibonacci of 34430, the latter of which appears viable in late 2020.
-- 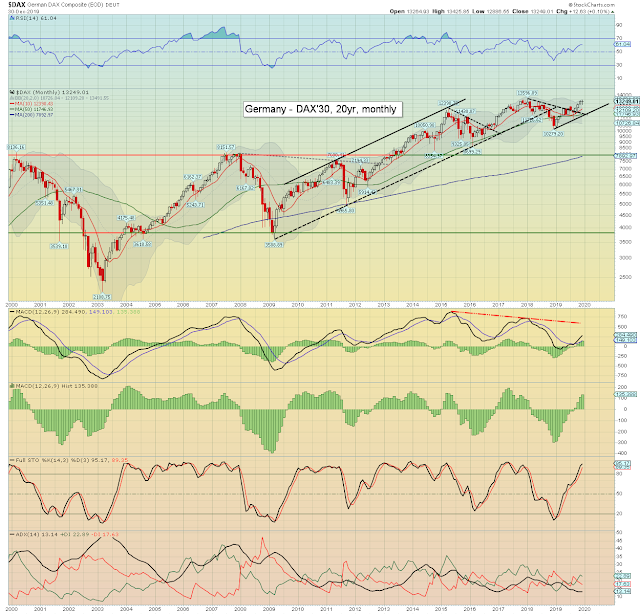 German equities climbed for a fourth consecutive month, with the DAX settling +12pts (0.1%) at 13249. For the year, a gain of +25.5%, and the decade, +122.4%. It remains the case that negative rates from the ECB continue to destroy the German/EU financials, whilst renewed QE is helping to juice asset prices upward.

It would seem likely that the German govt' will initiate some kind of fiscal stimulus in 2020. Whilst equities will react favourably, such deficit spending will rile up those who are still concerned about an eventual return of 'Weimer' inflation. 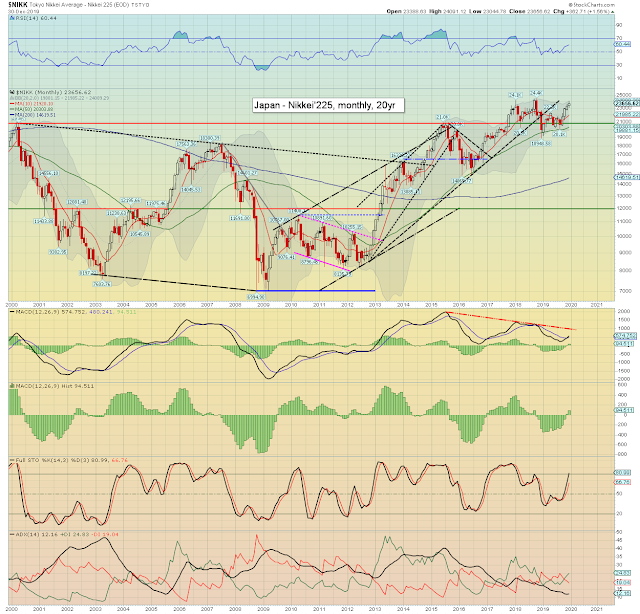 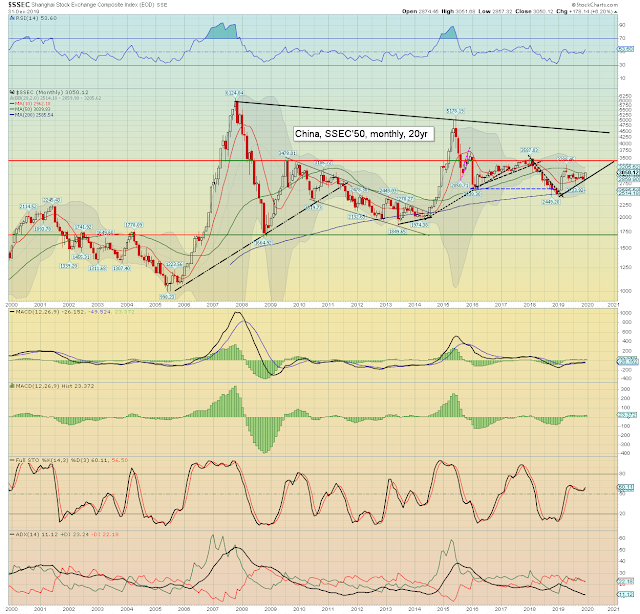 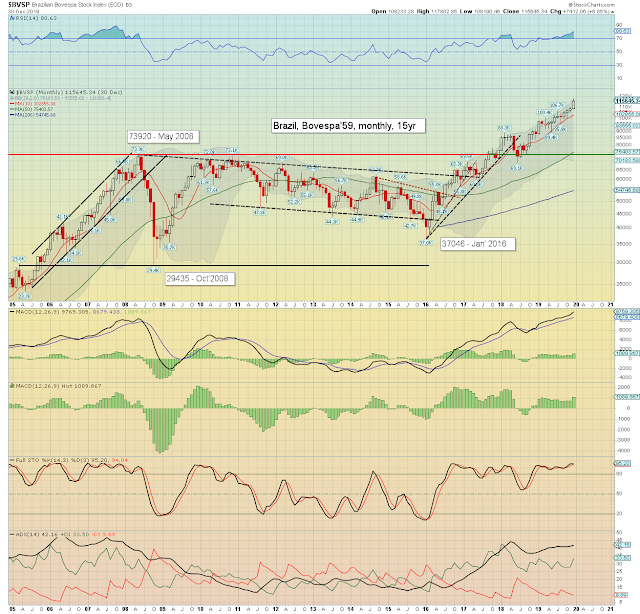 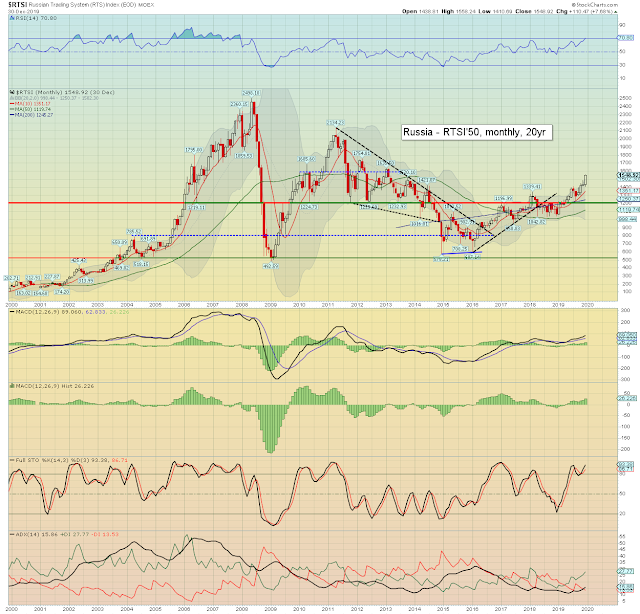 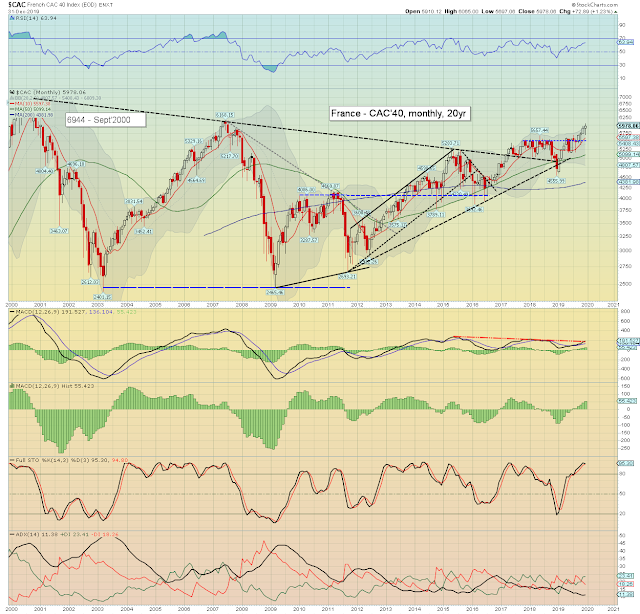 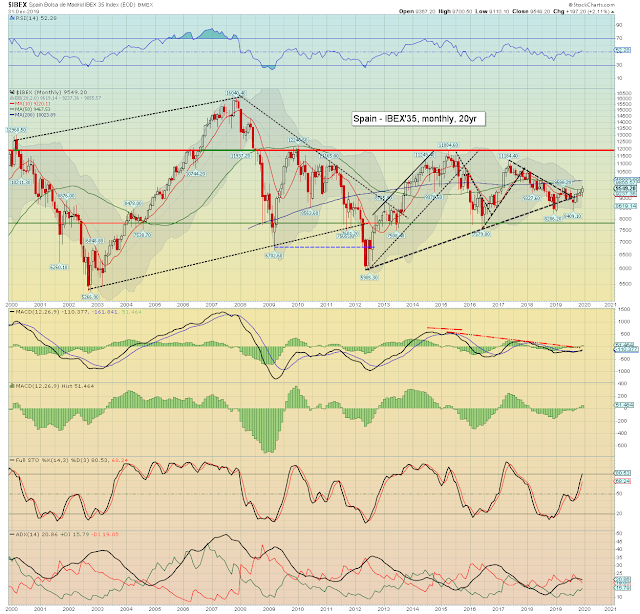 A fourth month higher for Spanish equities, settling +197pts (2.1%) to 9549. For the year, a net gain of +12.4%. For the decade, a very ugly net decline of -20.0%. Spain remains a fractured country, and underlying geo-political issues - such as Catalonia, will eventually re-surface. 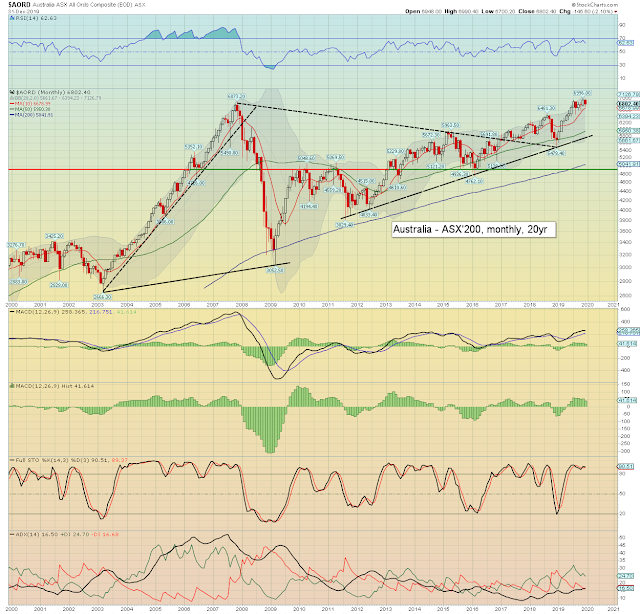 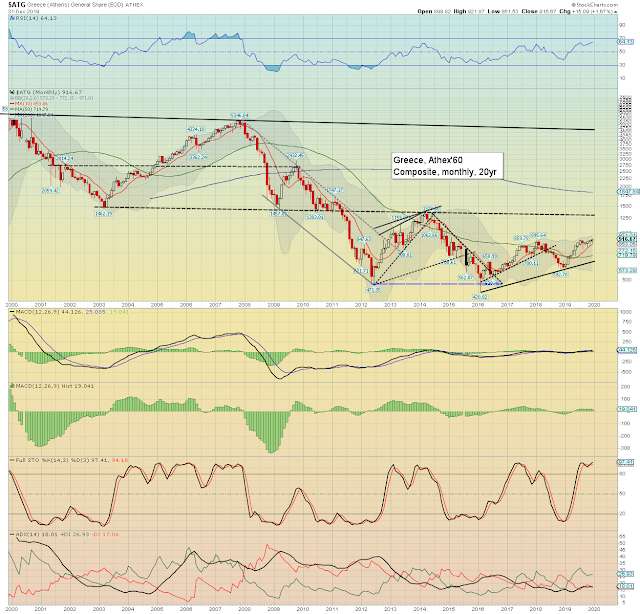 Greek equities settled +15pts (1.7%) to 916. For the year, a monstrous gain of +51.8%, but that still made for a horrific net decadal decline of -58.3%. The Greek market is a reminder that some parts of Europe never recovered from the Great Financial Crisis.
--

Nine markets were net higher for December, with one net lower. Russia and Brazil lead the way higher, whilst Germany and Australia lagged. The USA and Brazil broke new historic highs. All ten markets settled the month/year above their respective monthly 10MA.

The past decade saw the world economy struggle to recover from the great financial crisis. Central banks kept rates at emergency low, and even negative levels. Further, there was massive QE, which helped to juice most asset classes.

It is indeed the case that low/negative rates and QE continue, as the political and banking elite recognise that 'not all is not well', even though they would like to present otherwise.

The new decade underway is going to be tough. The central banks have created an 'everything bubble', and they surely know that if it pops, it'll be even more devastating than the carnage of 2007/09.

I expect rates to remain broadly low, with increasing amounts of QE. Despite existing government debt, it would seem some governments will increase spending to try to boost the economy. Again, that just papers over the underlying structural problems.

I would look to commodity prices. Gold certainly looks headed for new historic highs, whether by end 2020, or in 2021. Silver and copper could be expected to follow. The wild card is arguably oil. Any further upside in energy prices would be a significant negative pressure on the world economy.

Regardless of the economy, we can expect further massive development in technology. We should see a massive push toward all electric, fully autonomous vehicles. A personal inspiration is likely to come via Space, as NASA, SpaceX, Blue Origin, Virgin Galactic, and hopefully others, explore outward, and build permanent bases on both the Moon and Mars.

I've been regularly posting for almost eight years. The thought of another ten is rather daunting, but I'll try. Eventually, I hope to do regular web streaming... if only to speak, and ease off on the typing.

Sincerely... happy new year, and good wishes for the decade.

--
If you value my work, subscribe to my intraday service.

For details, and the latest offers: http://permabeardoomster.com/
--
*the next post on this page will likely appear 5pm EDT on Thursday, Jan'2nd 2020
Posted by Trading Sunset at 17:00:00
Email ThisBlogThis!Share to TwitterShare to FacebookShare to Pinterest
Newer Posts Older Posts Home
Subscribe to: Posts (Atom)