Equities ended 2018 on an exceptionally bearish note, but what about 2019? With the sp'500 having swung from 2940 to a recent low of 2346, the current m/t trend is bearish. A number of key stocks have taken out multiple aspects of support, with price structure that offers far lower levels by year end. Meanwhile, those at Print Central are already spooked, issuing threats to suspend QT.

This post will detail the US market outlook, the Federal Reserve, a trio of key stocks, miscellaneous stocks, and other world equity markets. I will highlight the results from seven Twitter polls, and consider a few other possible events for 2019. There will be a brief look to the week ahead, and then a final note.

Lets take a look at the spx, on the monthly candle chart... 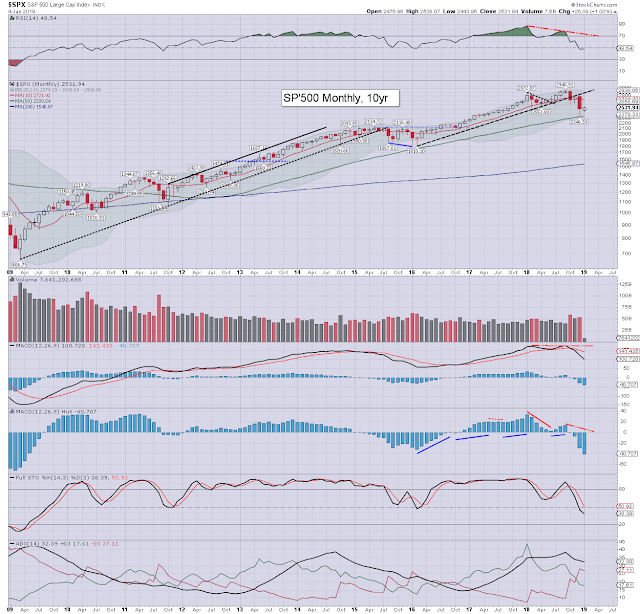 First, note the monstrous divergence between various technicals (such as RSI) and actual price, spanning Jan'>Sept'2018. Whilst the spx did break a new historic high of 2940 in September, price momentum put in a distinctly lower high.

I will highlight one especially alluring bearish scenario... 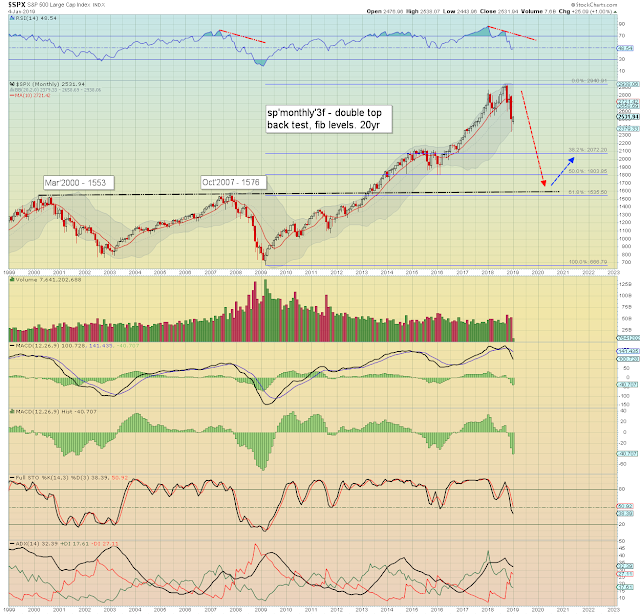 I've refrained from adding any wave-counts on the above chart. The more important issue is that we're currently far below the key 10MA, which remains my personal line in the sand. The fact that December saw a hit of the lower monthly bollinger should give the bears some confidence of far grander downside.

I'm aware some are seeking far lower levels (<1500) across the next few years, but that makes little sense, as the Fed would no doubt spool up the printers on any sustained downside much below sp'2K.

The Federal Reserve, aka Print Central

The policy and actions of the fed is always an important issue. I correctly called for four hikes in 2018. For 2019, I'm expecting at least two rate cuts. I would keep in mind though that the fed would very likely first suspend the $50bn a month of QT, before any such rate cut.

Right now, the most pessimistic outlook would see QT suspended as early as the FOMC of March 20th, with the first rate cut either May 1st, or June 19th. Such a rate cut would be the ultimate equity sell signal, although it's likely the market would initially rally on it... as was the case in Sept'2007.

I will highlight a trio of stocks that are representative of both the broader equity market and the US economy. 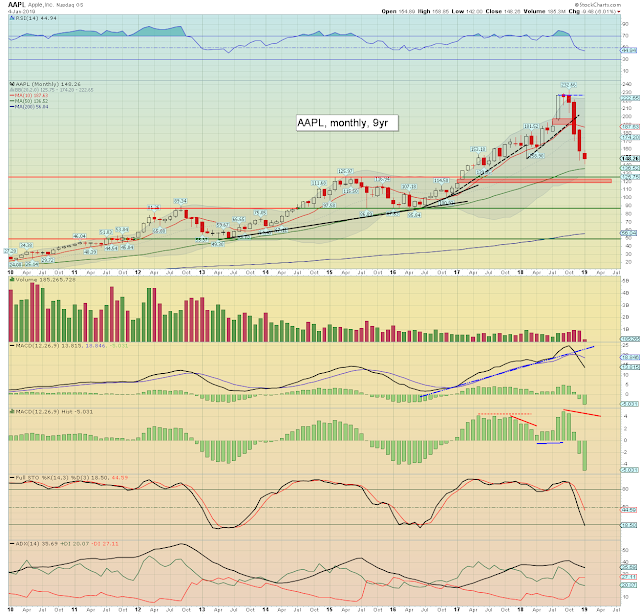 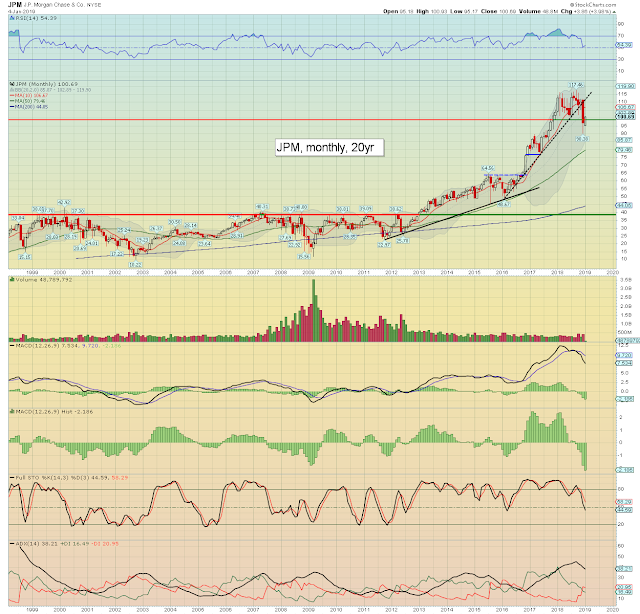 JPM has been the strongest of the upper tier financials since 2013, but it broke m/t rising trend in October, with December settling under psy' $100. First support are the 85s. Its arguable that if sp'1500s, the stock might retrace all the way back to old resistance/breakout of the 38/42 zone. 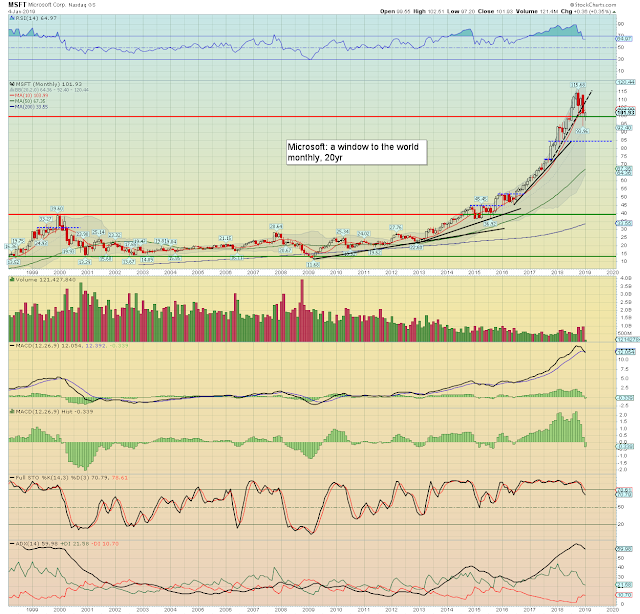 MSFT is very similar in price to JPM. The December settlement was decisively under m/t rising trend, if managing to settle just above psy'100. First support are the 85s. Note the breakout threshold zone of 39/40, which could be argued would sync with the sp'1500s.

APRN, the market has already largely priced this one for bankruptcy. Worst IPO of the 21st century.
-
GE, the l/t trend from summer 2016 ($30.57) remains 100% horror. If the sp'2200/100s are seen by the spring, new multi-decade lows can be expected in the 5s or 4s.
-
GS. the company is tainted and mired in all manner of problematic situations, not least Malaysia. Any weekly/monthly close under key price threshold of the $154s will offer $50 by early 2020.
--
JCP. Currently trading around $1, this will surely follow Sears, as box-retail remains over-saturated.
--
SNAP. One of the worse run companies in the US market. Its always possible someone might be stupid enough to want to buy it, but I'd see higher probability that CEO Spiegel might decide to step down.
--
TSLA. Q4 earnings will likely show another profit, as certainly supported by recent delivery numbers. The stock is close to key support of the 280s. If lost, its open air to psy'200/190s. It is the case that with AAPL lowering guidance, CEO Cook will be under increasing pressure to do something bold. Its arguable the most logical purchase would be Tesla. Whether Musk, and a majority of other shareholders would be willing to sell, is another matter entirely. Maybe Apple should offer $420? #takeoversecured ?
--

I don't have the time/space to highlight the usual ten. Two will have to suffice, but they are both a good representation of other European and Asian markets. 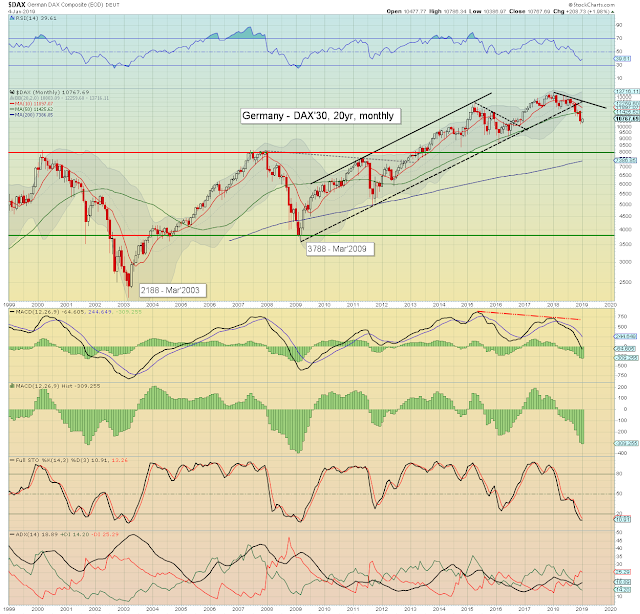 For the wave counters/chartists out there, as I've noted for some years, the German DAX has the cleanest price structure of any market We have a clear five wave structure from the 2009 lows. The DAX is currently net higher for January by 2.0% at 10767, but the m/t trend is clearly bearish. Supports, psy'10k, and then 8k, the latter of which would be a back test of the 2000/2007 double top. 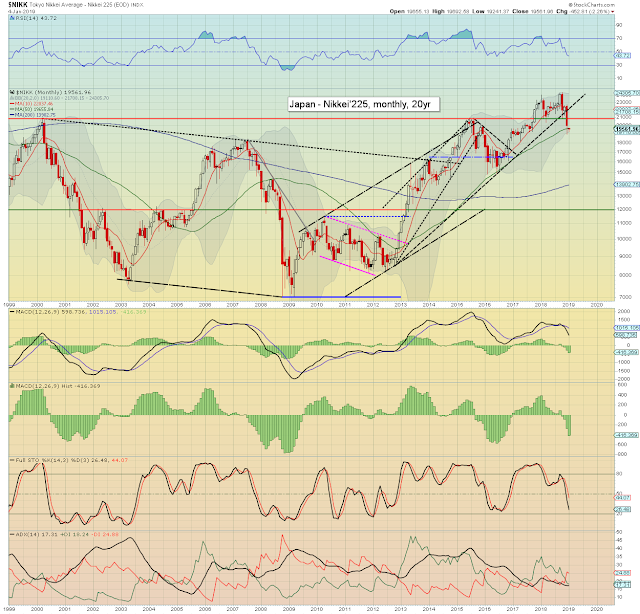 The Nikkei fractionally broke l/t trend in October, saw a bounce in November, but the December settlement was decisively bearish, back under the key 21k price threshold. Much like the DAX, the NIKK has a rather clear five wave structure from 2009. The more bearish could target 12k.
-- 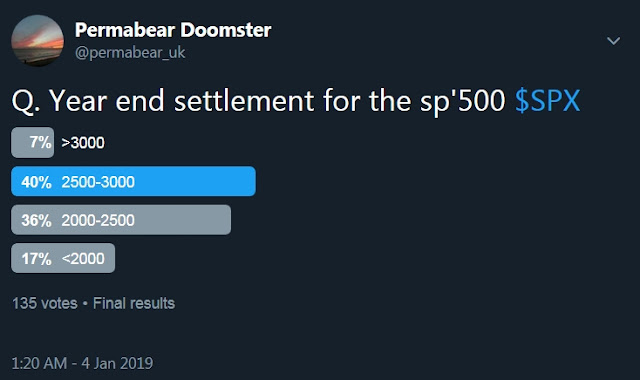 Its notable that more see a year end close <2k than >3k. I can understand that a majority expect a year of broad equity chop, ending roughly u/c.
- 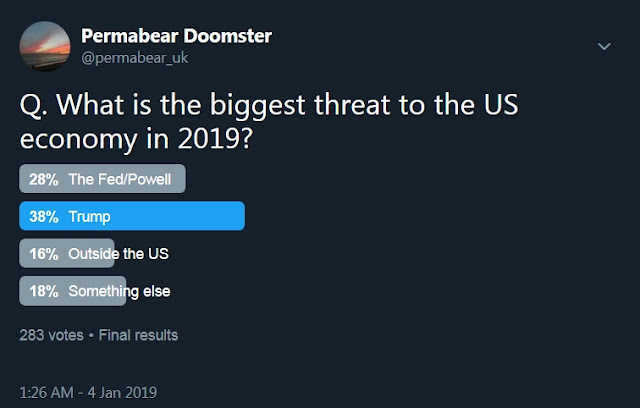 I'm not surprised to see Trump 'win' this one. My personal vote would go to 'outside the US'... namely the EU and China.
-- 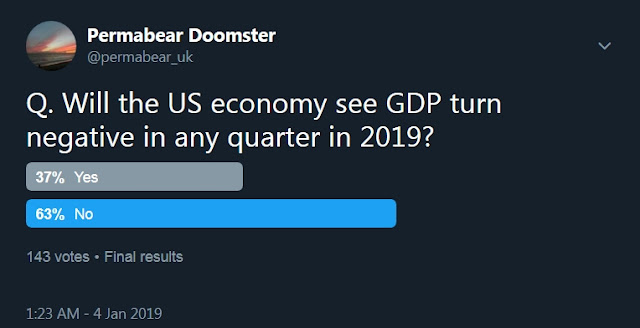 Whilst I do expect some degree of lower growth for the US, I do not anticipate any negative quarters, even in Q4, whose data we won't have until Jan'2020.
-- 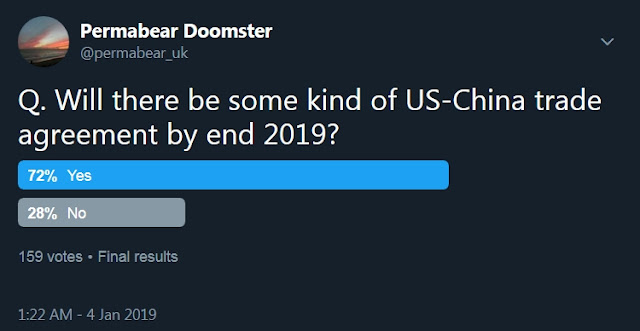 It is indeed the case that most do see the US and China eventually coming to some kind of trade agreement. Even if an agreement is reached, it shouldn't be seen as having any significant economic benefits on anything other than a mid/long term basis. If the global economy does see increased weakness as the year proceeds, it really won't matter whether there is any such trade agreement.
--

For the moment, a clear majority are not expecting the fed to cut. As noted earlier, I do expect rates to be cut this year, although QT will almost certainly first be suspended.
-- 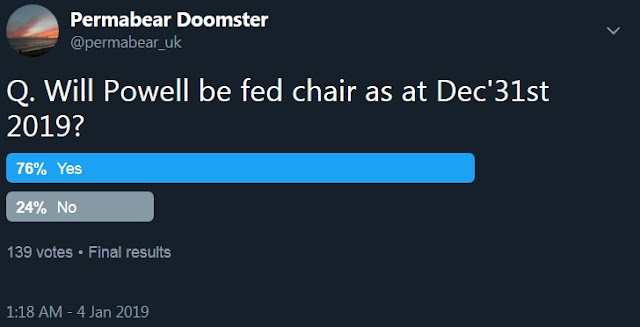 In the Friday chat with Yellen and Bernanke, Powell was asked if he was requested to resign by the US President, would he resign? Powell gave a simple and clear 'no'. However, a few did note afterwards, what else could he have said? The reality is that if Trump did 'politely request' Powell to resign, I'd still imagine he would. A natural replacement would be Bullard, who would absolutely reduce rates back to near zero, not least if Trump called for it.
-- 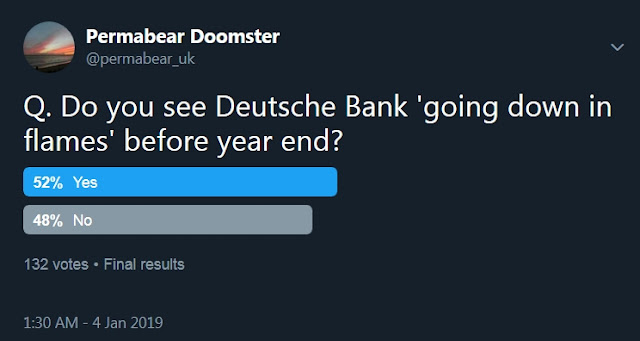 Deutsche Bank stock settled Jan'4th at $8.52. At the current rate of l/t decline, the stock will see the 5/4s by mid year. At that level, I'd expect 'issues' to have arisen. Whilst the stock can be expected to eventually hit zero, that sure doesn't mean the institution itself will just disappear. The ECB will have to step in, extinguish whatever financial fire there is, pick up the ashes, and maintain it to stop however many trillions of derivatives this monster is involved in from taking down the European or even global, financial system.

*Many thanks to those who voted.
--


A few other considerations

-Germany in recession (we might know that with the first print of Q4 GDP, due Feb'14th.
-UK govt', delay or cancel the exit from the EU.
-UK election, with Labour victory, and new PM Corbyn
-GBP, parity to the USD. Yours truly would be fine with any further depreciation in the Pound, as I didn't choose to charge for subscriptions in USD for no good reason.

-Gold >$1400, which would be a decisive breakout, and offer a fast run to challenge the 2011 historic high of $1923. Hyper bullish implications for the related gold miners, not least Barrick Gold (GOLD) and Newmont Mining (NEM).

-WTIC, a challenge of the 2016 low of $26.05. If seen, it'd cause havoc for the US/global energy sector. On the plus side, lower energy costs would be a net positive to the global economy.
--

It will be the first full trading week of the year.

We're only four trading days into the year, and we've already seen some wild price action. That can be expected to continue for months to come, perhaps the bulk of the year.

What about my year end spx target? My guess would be 1791. That assumes QT is suspended, with at least one rate cut by the autumn. Might we see the sp'1500s this year? Perhaps, but things could just as easily drag out into 2020.

It should be clear, the world economy is seeing some degree of slowdown. This is especially the case in the EU, with Germany soon set to be officially deemed in recession. Asia is unquestionably struggling, and regardless of however many stocks the BoJ might buy, the Japanese market is also m/t bearish.

I sure don't have a Delorean time machine, so make of the aforementioned... what you will. Further, I'm at liberty to alter my outlook. Most certainly, if we see any monthly settlement back above the 10MA, I'll be the first to tout the market as m/t bullish. Otherwise, I'll be looking to trade things (mostly) on the short side, all the way down to the sp'1500s. Even if seen, it doesn't merit any 'end of the financial world' chatter. It would merely make for a very powerful retrace to levels last seen in summer 2013.

Have a good weekend
--
If you value my work, subscribe to my intraday service.
For details and the latest offers, see... permabeardoomster.com