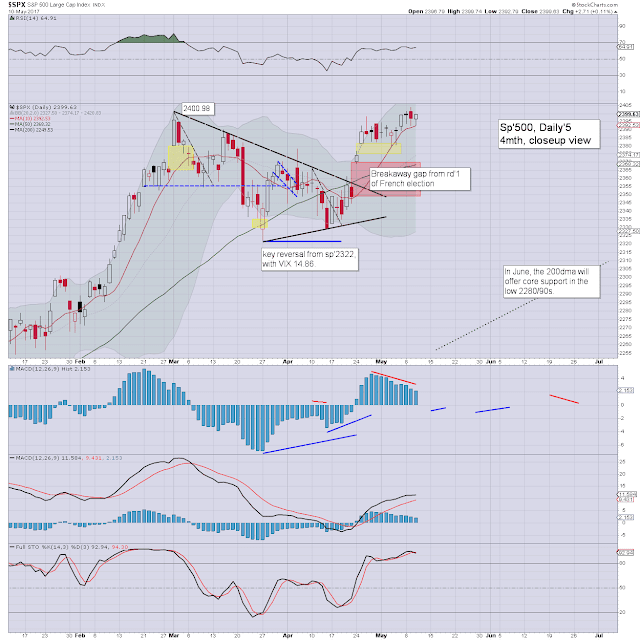 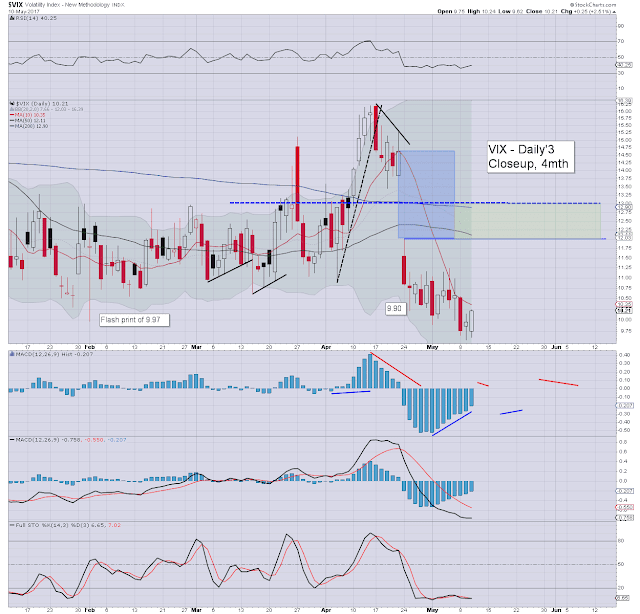 It was yet another of minor chop in the US equity market, with a trading range of just    pts.

Volatility remains extremely subdued, with the VIX now regularly printing the 9s. A foray into the 8s is viable as early as this Friday.
--

As some of you might have noticed, I tend to use the term 'scary strong' to describe ongoing equity price action. I don't use the term lightly. It should be clear that every micro down wave is being bought. There are simply very few willing to sell at these levels.

The central banks are buying of course - around $1.7-1.9trn so far this year. The corp' stock buy backs are also keeping a bid under the market. Then there is the issue of capital inflows via the bond market. Yes, rates are being raised, but we're still at low levels. For most, the equity market is the only place to generate a decent yield.

US equity price action remains scary strong, and based on price structure in many other world markets... we're headed far higher.
--


Clapping and booing on command

I try to refrain from anything remotely political, but this merits highlighting...

So.. Colbert announces Trump has fired Comey... the crowd are wildly cheering. Ohh but wait... Colbert has to now twist it around, with the audience now vehemently booing.

As someone from the eastern side of the Atlantic Ocean, I find Colbert's style grossly unprofessional. We're now at the stage where a leading TV host is running a chat show that seems almost entirely focused on tainting the US President.

No UK mainstream host would ever present in such a way. To Colbert, and his audience of lackeys, I have only this to say...


--
Notable earnings smack down in SNAP...

Another piece of junk, back to the IPO level of $17.00. Clearly, there are buyers out there, but who would seriously want to put real money into it? Hell, even TSLA or NFLX would be 'fundamentally' more sound buys.
--