Despite the significant Thursday decline, the US equity indexes remain strongly bullish. Even the Dow is now starting to push higher, and the 16000s look set to be hit before year end.  With continuing QE-pomo, the current multi-month ramp looks set to continue into spring 2014. 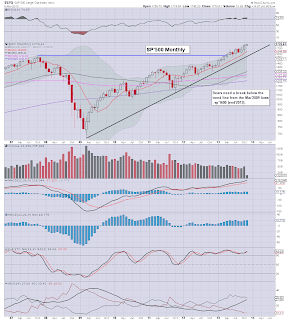 We're a mere 5pts shy of the recent high of 1775, and the sp' looks set to break into the 1800s before year end. Certainly, we're scraping along the upper bollinger, and the 1800s look more likely next month..than November. There is absolutely nothing bearish here. Underlying price momentum is strong. 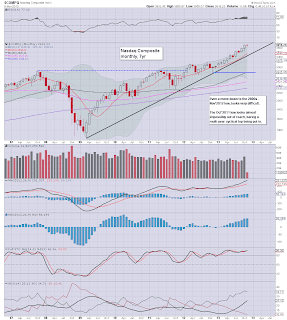 The tech' is just fractionally lower so far this month, but looks set to break into the 4000s within the next few weeks. As noted over the last few months, the ultimate target remains the tech bubble peak of - March'2000 @ 5132. That of course is a clear 28% higher than current levels..and will probably not be hit until 2015. 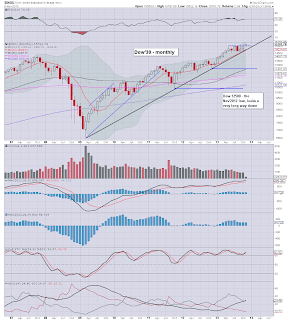 The mighty Dow has lagged the other indexes for around six months, but is now in the process of playing catchup. I'm seeking a few daily closes in the 15800s to clarify that 16k is likely...which in itself should make 17k - by late spring 2014, a given. There is absolutely nothing bearish here. Equity bears have zero reason to be excited unless the Dow breaks rising support, which is currently around 15k. 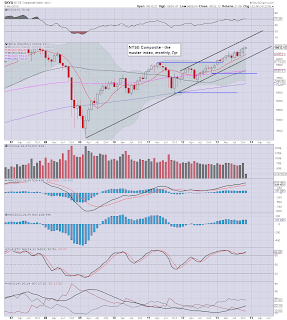 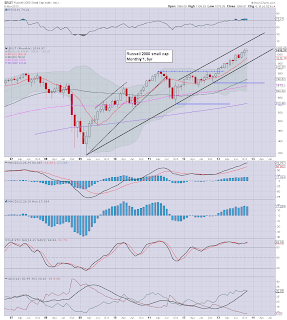 Like the Nasdaq, the R2K is fractionally lower, with the Friday gain of 1.9% really helping. The R2K looks set for 1150/1175 by year end, the 1200s will be tough, as there will no doubt be a great deal of profit taking into year end..after such strong gains this year. 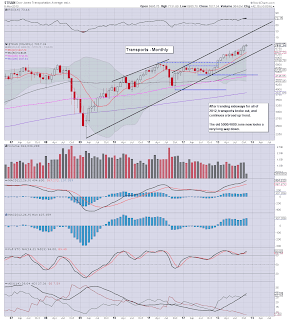 The old leader is holding the 7000s, and looks set for 7500/7750 by the end of next spring. There is nothing bearish here. Equity bulls have downside buffer to the 6500s - by end Dec, and that won't damage the core rising support from 2009.

The transports certainly is having a starkly different year to 2012...when it flat lined for the entire year in what was a bizarrely tight trading range around the big 5k psy' level.

Unquestionably, we're still broadly headed higher. None of the US indexes are even slightly bearish. Indeed, equity bulls have a good buffer zone of around 5-7% to the downside, and that would still leave the monthly picture broadly bullish.

With the weekly and monthly charts very much still clawing their way higher, I have no choice but to hold to the following crazy outlook... 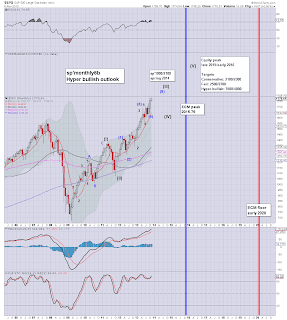 I certainly see an intermediate peak at some point next year, but..probably significantly higher than current index levels. We could be talking about a 20% drop..but from the sp'2000/2100s. In many ways that would be a natural back test of the old double top of 2000/2007.

In terms of US data, there isn't anything of significance due. There are the sporadic Fed officials on the loose, including the Bernanke on Wednesday (although that probably won't amount to anything).

Friday is opex, so..expect some chop to conclude next week.

For the few remaining equity bears it continues to be a frustrating..and disturbingly bullish market. With the weekly and monthly charts both outright bullish, it seems utterly pointless to attempt any index shorts..even for the smaller 60/15 min trading cycles.

More than anything, I think those of a permabearish persuasion, should merely be in 'survival' mode until next spring..which in most cases should simply be a case of sitting it out on the sidelines.

For the few remaining equity bears out there, today was just another reminder of what QE-pomo means for this twisted market. Whilst the US federal reserve throw an annualised one trillion of new 'benny bux' money at the US capital markets...any 'significant' decline is simply not possible. 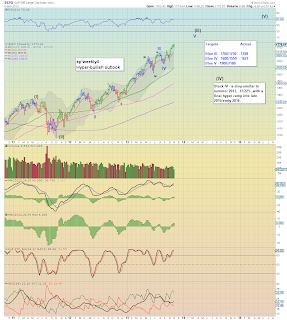 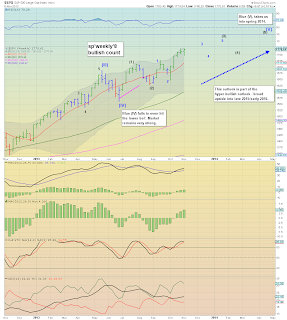 For many of you out there, I realise this was just another depressing and disappointing end to the week. After all, Thursday's drop of sp'23pts was pretty impressive, not least with the Trans/R2K both getting smashed lower.

Yet, we have closed the week near all time historic highs..and the weekly charts - which were looking a touch vulnerable yesterday, are now right back to outright bullish.


What am I doing?

I did get one message earlier today, noting that a prediction of mine never worked out. Certainly, I had been looking for the sp'1735/30 zone to be hit.

To clarify, I am NOT shorting this market. I have..and will continue to state, I believe this market is effectively untradeable on the short side. Trying to grab 10, 15..even 25pts of downside is overly difficult in my view..and is simply not good on a risk/reward basis.

I have ZERO intention of shorting the main indexes (along with long VIX) until late spring 2014. Even then, trying to catch a late spring/early summer top will be damn tricky..not least for the option players who face the relentless problem of a ticking detonator clock.

Lately, I have done a few minor trades, but generally, I'm more than content to leave the indexes well alone.

I'm pretty sure we'll see a multi-month down wave next year...probably on the order of 17/22%..and that will most definitely offer great opportunity for the bears. It sure isn't spring yet though, and indeed, I'm generally a mere spectator on the sidelines.

After all, I am still inherently a 'Permabear' in trading style, but what I won't do..is get ground down to dust, before the eventual giant monthly cycles start to rollover.

I hope that clarifies things.

Goodnight from London
-
*weekend post, late Saturday, on the US monthly indexes
-


Video from the legendary Bill Still

A great reminder to many that if you strip out the QE 'new money', the US (or much of the EU/Japan) never really exited from the recessionary collapse wave of 2008/9..
Posted by Trading Sunset at 04:00:00
Email ThisBlogThis!Share to TwitterShare to FacebookShare to Pinterest

The main indexes (with massive help via a large dose of QE-pomo), closed significantly higher, with the sp +23pts @ 1770. The two leaders - Trans/R2K, closed higher by 1.1% and 1.9% respectively. The mid-term outlook remains for broad upside into late spring 2014. 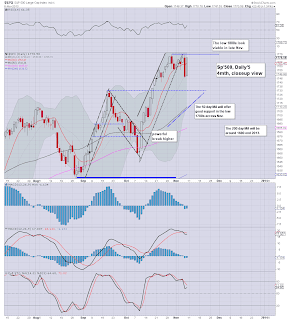 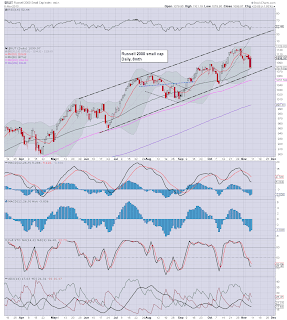 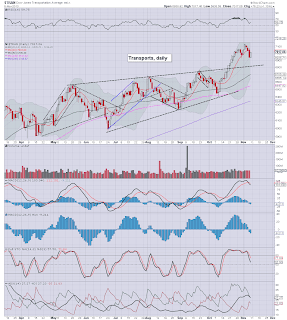 The market giveth...and the market taketh away.

It remains a terribly nasty market for the equity bears. A Thursday fall of sp'23pts..entirely negated..and we're right back to the Wednesday closing level of 1770.

The gains in the Rus'2000 should be especially concerning to the equity bears. This was one hell of a strong rebound, and keeps the main market on track for further gains into early December.
-