Despite the main indexes declining in the morning, the VIX only managed brief gains of 4%, and those entirely failed to hold by late afternoon. The VIX closed -0.04 to settle @ 13.79 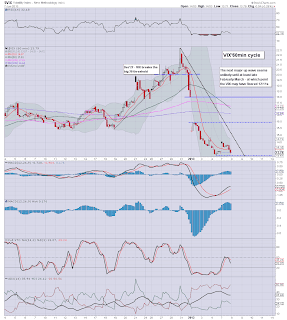 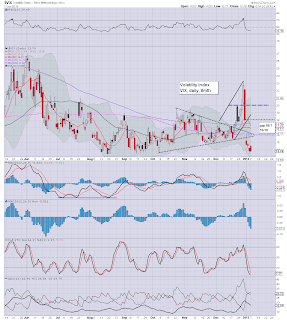 If the SP' retraces lower later this week, a brief VIX jump to around 16 would be the very natural spike high.

Considering the bigger monthly index charts, and if sp'1500s are indeed attained, we are set to see VIX in the 12s..perhaps even 11/10 this coming February/March.

It is indeed remarkable complacency.

Eventually this renewed equity bubble will blow up..but for now...its likely to lasts into the early spring.
-

more later...on the indexes.
Posted by Trading Sunset at 23:00:00
Email ThisBlogThis!Share to TwitterShare to FacebookShare to Pinterest

The morning weakness floored @ 1456, and as expected, we saw a latter day recovery - although the main indexes all closed a touch lower. With the VIX closing red for the fifth consecutive day, the bulls are most definitely back in control of this fearless market. 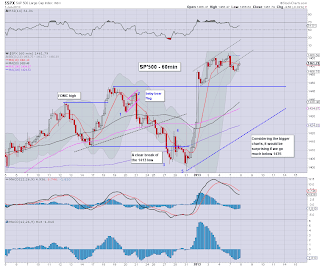 A pretty quiet day. Any bear out there getting excited earlier this morning about the near 10pt drop on the sp'500, should go stare at one of the weekly index charts for a few hours.

Primary trend is most certainly upward, and the monthly charts would suggest as high as sp'1510/20 in February.

That sort of action will not help the equity bears. Key level remains 78s.
--

Whether we break a new higher tomorrow.. very difficult to say. the underlying hourly cycle would suggest its very possible.
--
Bits and pieces across the evening.
Posted by Trading Sunset at 21:02:00
Email ThisBlogThis!Share to TwitterShare to FacebookShare to Pinterest

It would appear sp'1456 was the days low, and we'll churn slowly higher into the close..and indeed, possibly for much of Tuesday. VIX is struggling to hold gains of 2%..and could easily close red for a fifth consecutive day. Metals remain weak, despite the $ going red. 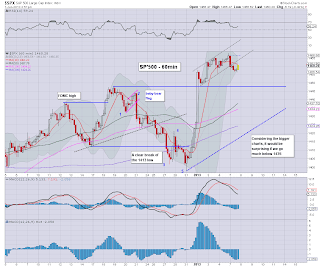 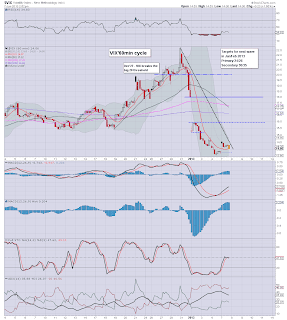 Its not exactly the most exciting day.

The trading range is pretty narrow, and I certainly can't be meddling in this.
--

*we do have Q4 earnings starting tomorrow afternoon though, with Alcoa (AA), so thats something for everyone to look ahead to.
--

The week has started with a decline, but its arguably nothing less than minor noise. More than likely...a late day recovery, to once again annoy those bears seeking a big move lower. The key 1398 level looks a very long way down from these levels. 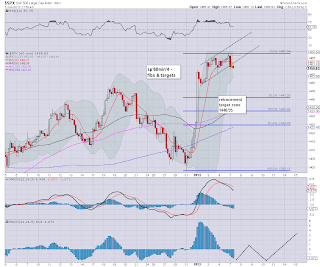 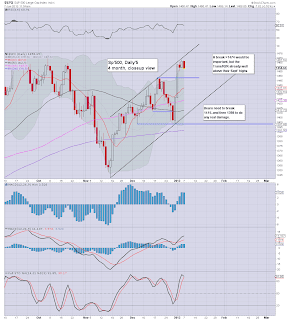 The daily MACD cycle is levelling out..finally. Yet, we need to close the day at these levels - and I'm guessing we'll recover by the close.

What is absolutely clear - especially on my bare-bones daily chart, we could drop to sp'1415 by Friday, and that'd do NO damage to what is a very broad..and strong up trend from the 1343 November low.

we churn around until Tuesday, and then maybe..we'll start to see some sort of proper retracement, which should at least break to the 1440/35 area.

So, I ain't re-shorting yet...at least not until late Tuesday morning.
--

stock of the day... AMZN 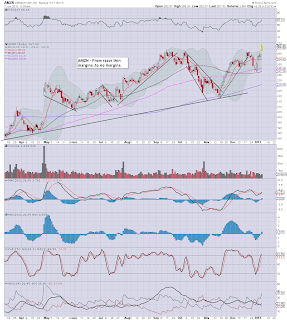 Ironically, if AMZN can just post a loss for Q4, it won't have to worry about such high PEs anymore...since it won't have a PE at all !

UPDATE 1.20pm  Its getting tedious, or maybe that's just me? 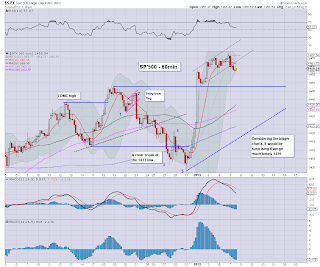 On any basis, we're due to cycle back higher again into the latter part of Tuesday.

Bears abysmally failed to break the key 1398 low last Monday, and it looks like we won't be back under that level for some months.

Back later
Posted by Trading Sunset at 16:58:00
Email ThisBlogThis!Share to TwitterShare to FacebookShare to Pinterest 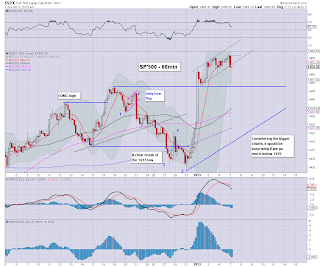 I'm not getting involved in this mess. The MACD cycle on the hourly says we're low, and we could still easily close slightly higher.

Indeed, for the longer term traders, this morning is arguably just another buying time.
--

As noted earlier, I'd consider a brief re-short, after the next up cycle is complete.

I'm still looking at a bounce..maybe a new high..don't know yet... 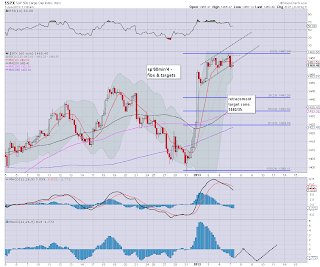 See MACD cycle. A re-short early Tuesday..perhaps.
Posted by Trading Sunset at 15:06:00
Email ThisBlogThis!Share to TwitterShare to FacebookShare to Pinterest

Good morning. Market is a touch weaker, in early trading, futures are suggesting sp -4pts, we're set to open around 1462. $ is 0.1% higher, metals are mostly flat. No econ-data due today. Q4 earnings start at the Tuesday close with AA. 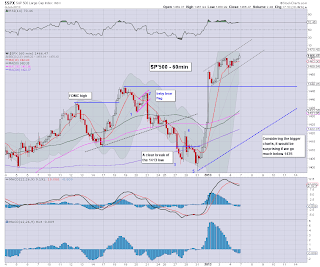 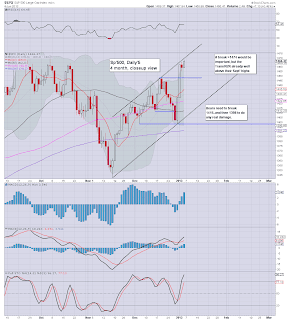 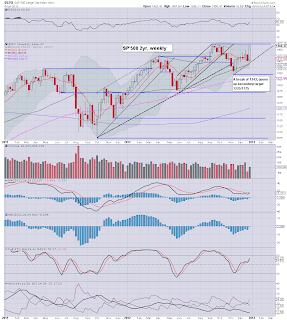 It could be a pretty quiet day in market land.

If you consider the underlying momentum on the daily and hourly charts, I don't think we'll see much of a drop today, if at all. In fact, a fractionally higher close seems probable.

With the weekly and monthly charts now VERY strongly bullish, the default trade is obviously long, yet the two day hyper-ramp is pretty extended, and a 50% retracement would be natural.