Most of the world equity indexes managed to ramp back upward into end month. Net monthly changes ranged from +2.4% (China), +2.0% (USA - Dow), to -13.7% (Greece). The spike-floor closing candles are highly suggestive of continued upside into year end. 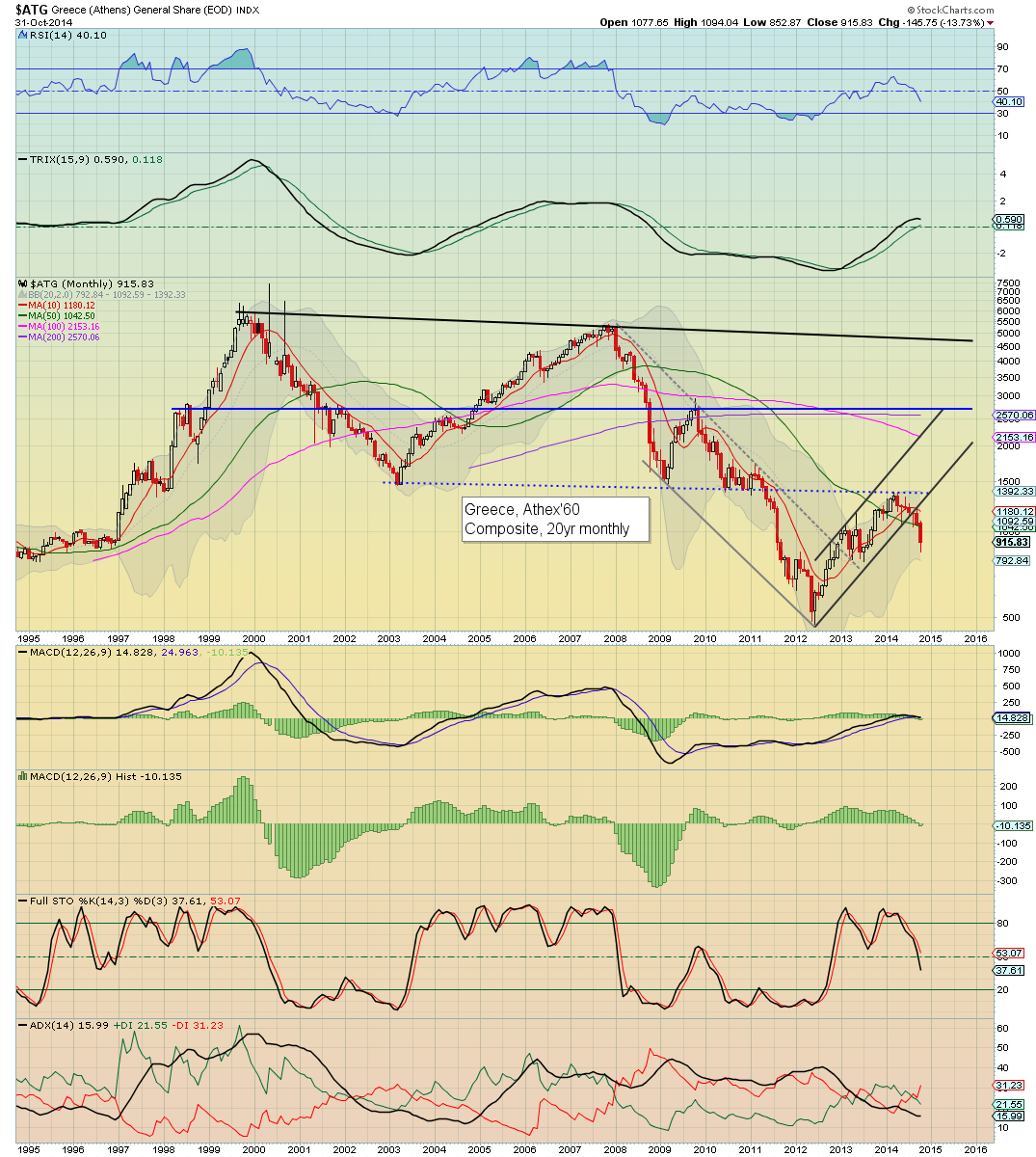 Despite closing somewhat above the lows, the Athex still lost a net -13.7%, closing lower for the 7th consecutive month. Hyper bulls need to take out 1400, to open up the next huge resistance level of 2500. This will not be easy though, since the Greek economy has of course collapsed. 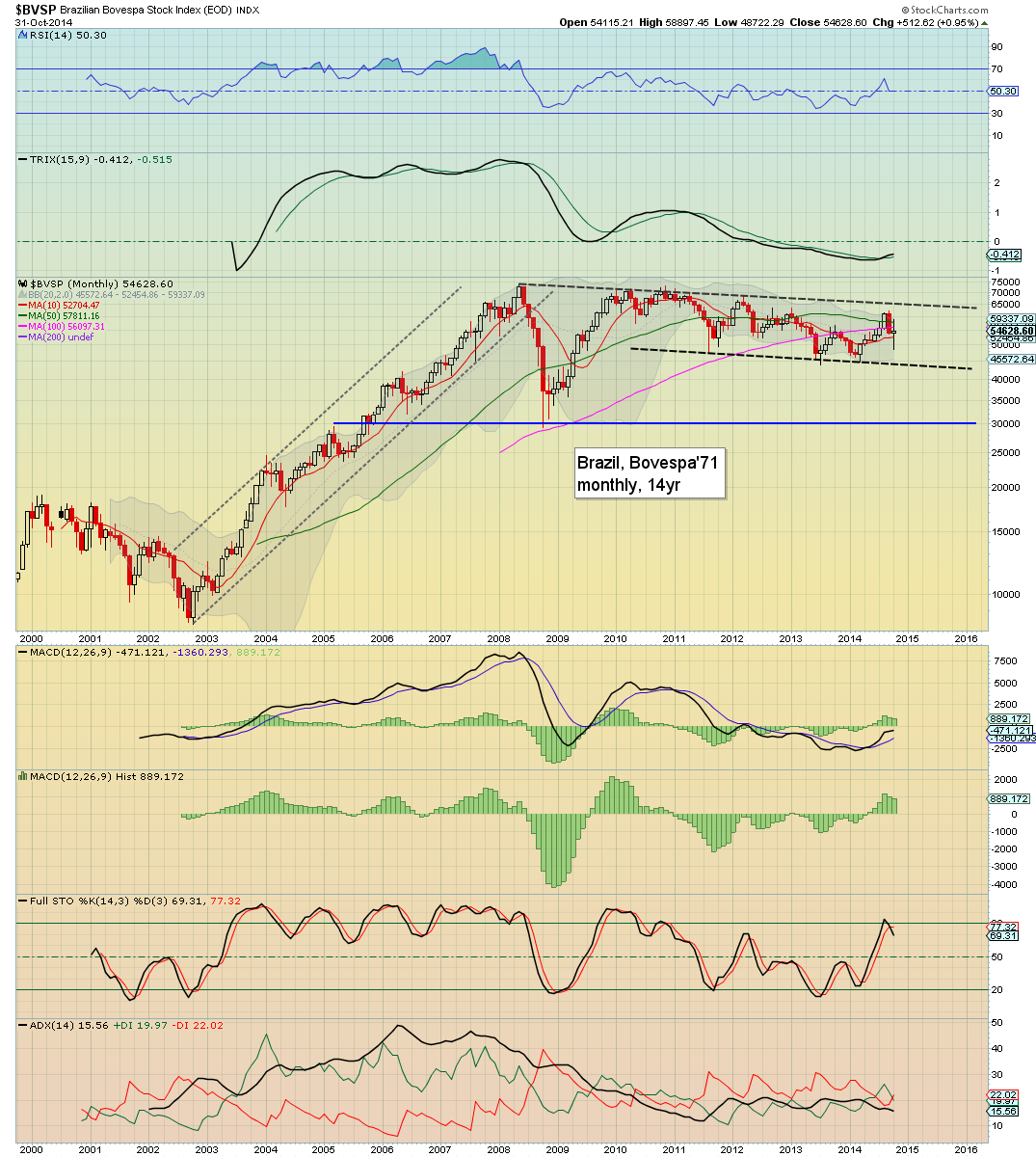 With the election out of the way, the Bovespa managed a net monthly gain of around 1%. Near term outlook is moderately bullish. A break above 65k would be extremely bullish, but with commodity prices broadly weak, that looks unlikely until at least spring 2015. 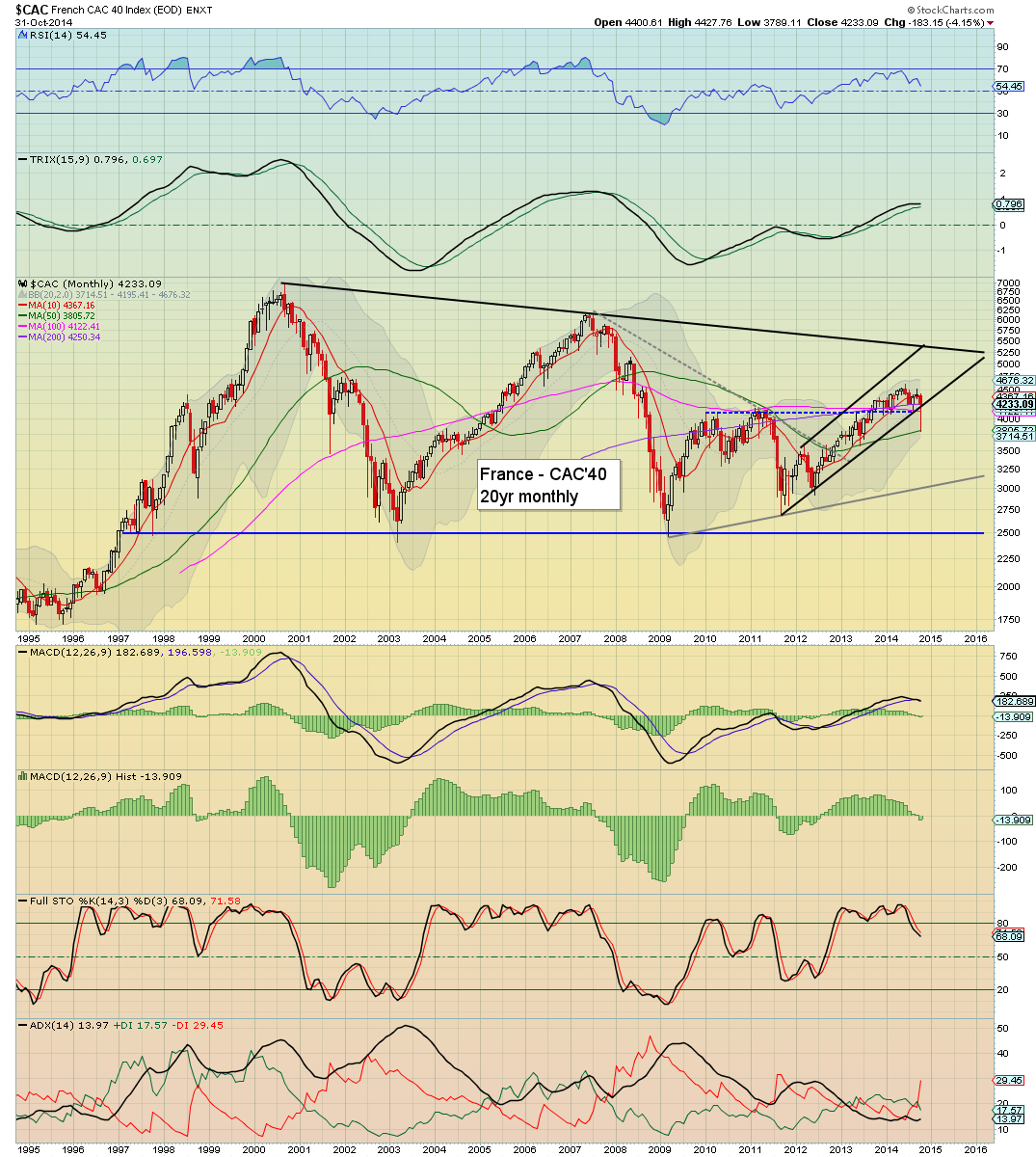 The French market declined by a very significant -4.1%, but this was hugely above the lows, by around 10%. Equity bulls need a monthly close >4500 to clarify that the recent weakness is over. 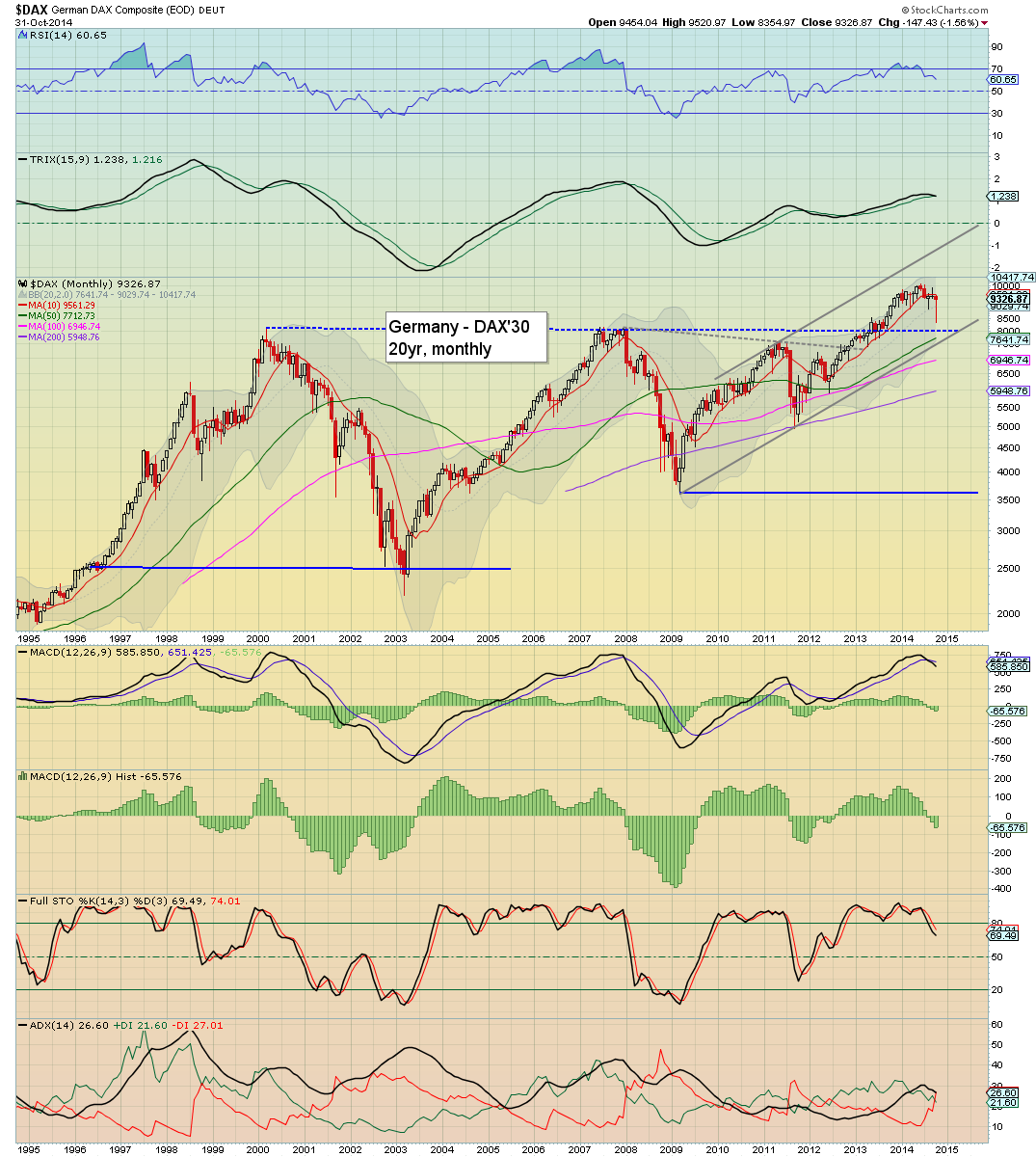 The economic powerhouse of the EU saw a net monthly decline of -1.6%.. but like all other indexes.. well above the low. Equity bulls need to re-take the giant 10k threshold to clarify that much higher levels are ahead in 2015. 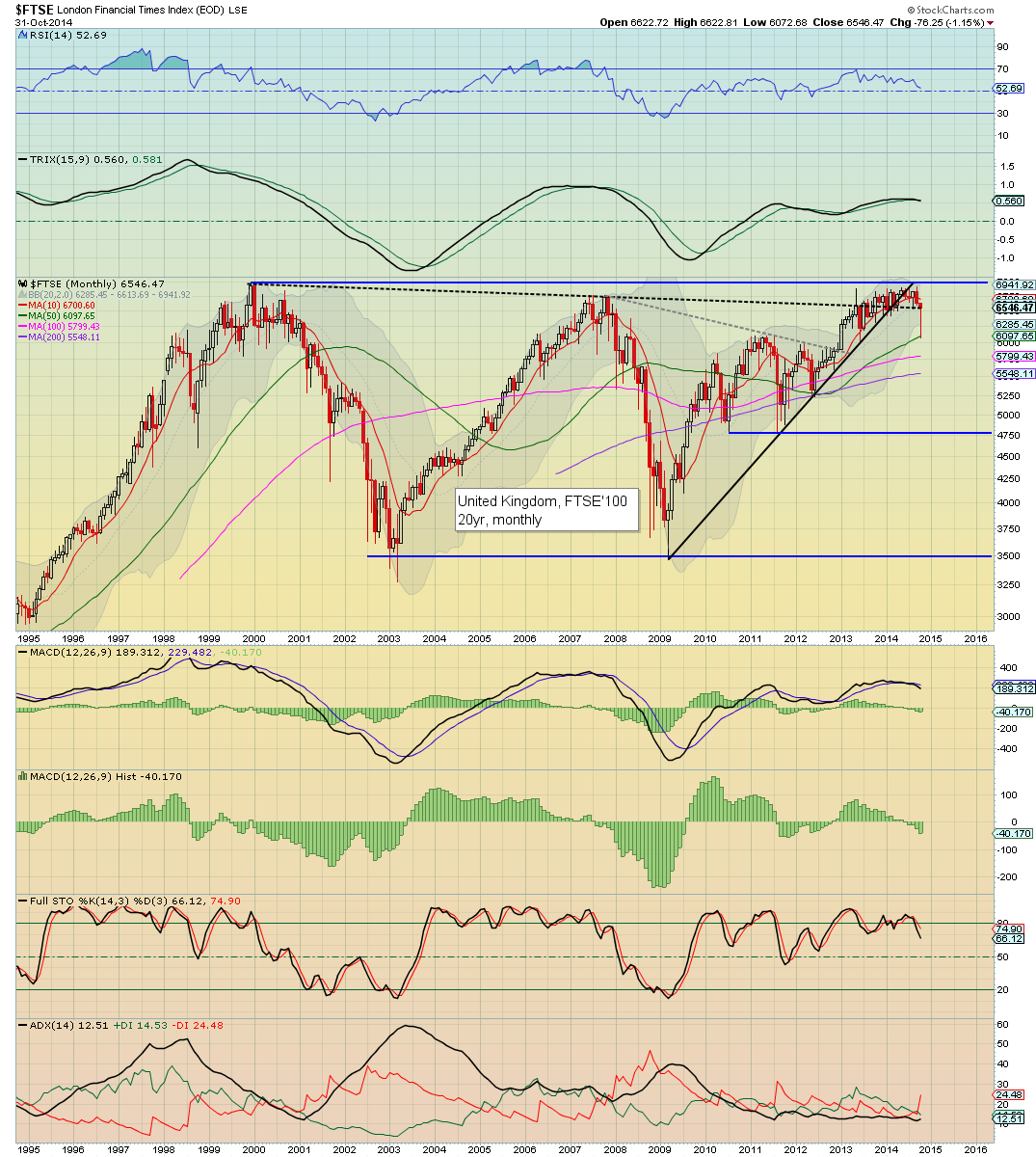 The UK market fell -1.1%, but well above the low of 6072. It remains notable that the UK market is still struggling, and yet to break the historic high from Dec'1999. 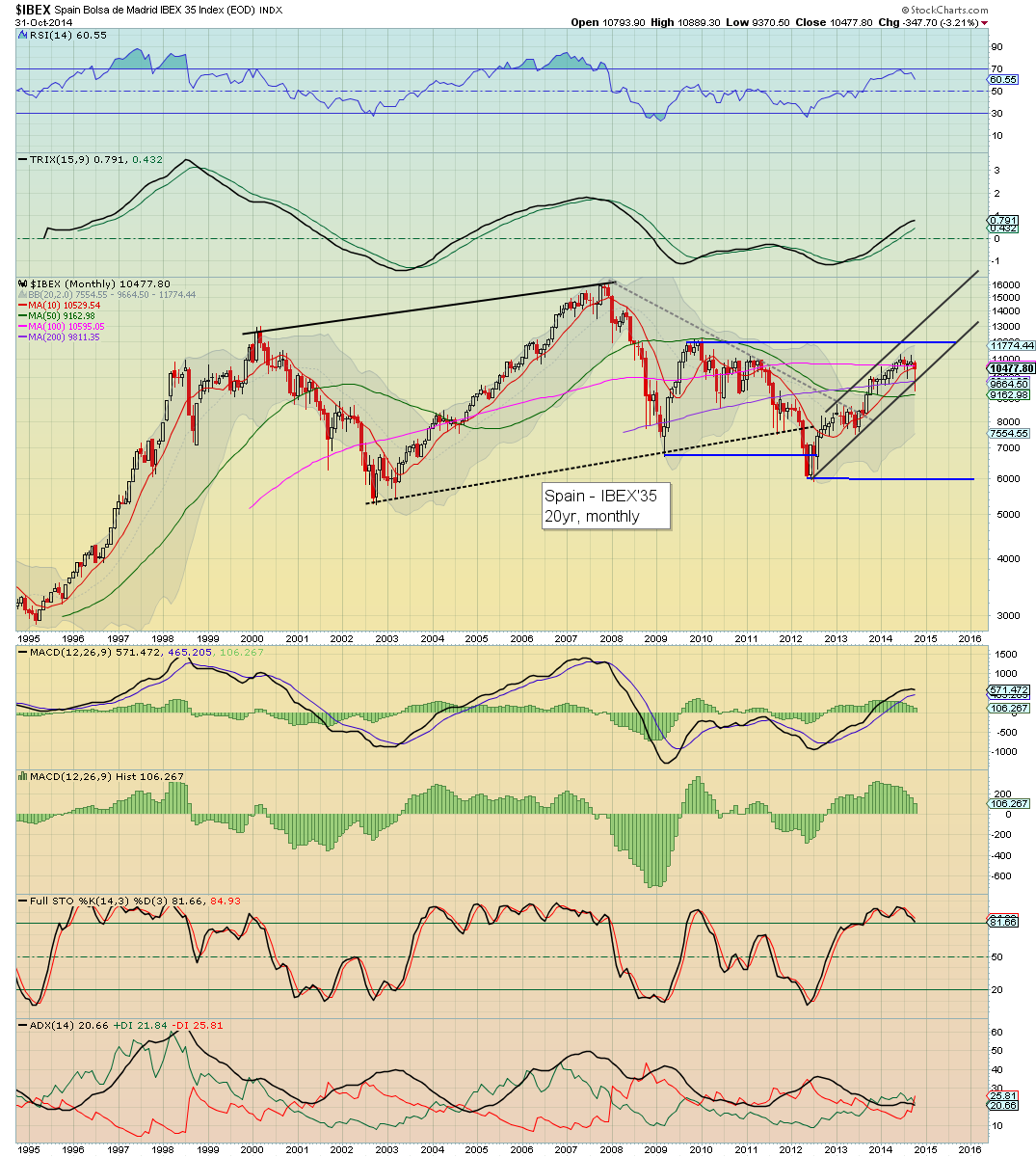 The ugliest of the EU PIIGS, the Spanish market fell a net -3.2% in October, having briefly broken the rising trend from 2012. Equity bulls need a monthly close back in the 11000s to offer 12k in early 2015. 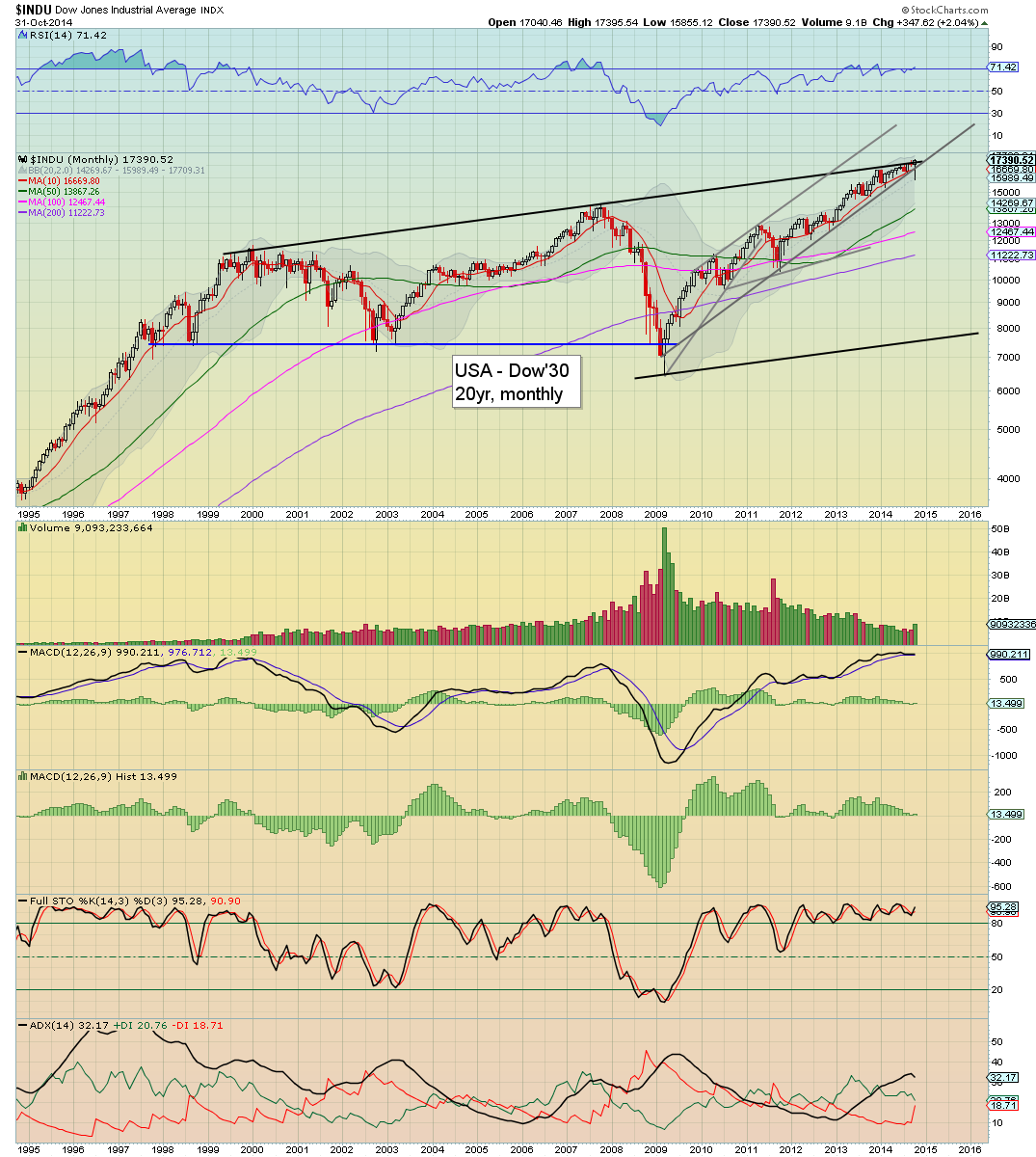 The Dow decisively broke under rising support in October, but saw a hyper ramp from 15855, to a new historic high of 17395, resulting in a net monthly gain of 2%. Upper monthly bollinger is offering the 17700s in the immediate term. Underlying MACD (green bar histogram) cycle which was negative earlier in the month back to positive, and is levelling out. A new multi-month up wave looks due. The obvious big bullish target is 20k. 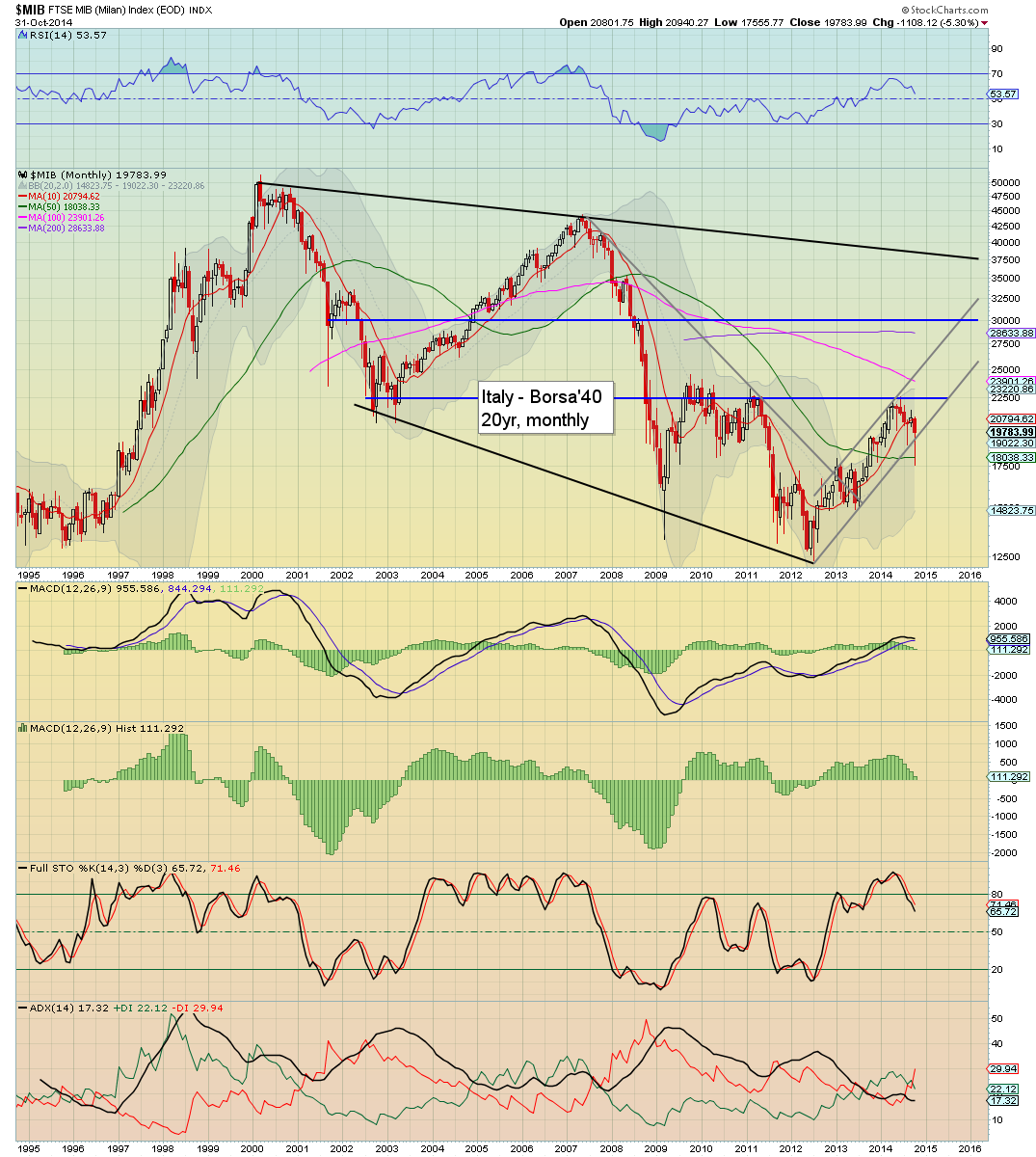 The Italian market lost a very significant -5.3% in October, but this was well above the lows. Equity bulls should be seeking a monthly November close back above 20k.. which would offer a break and hold above the 22k threshold. Once that is achieved, next level is 30k. 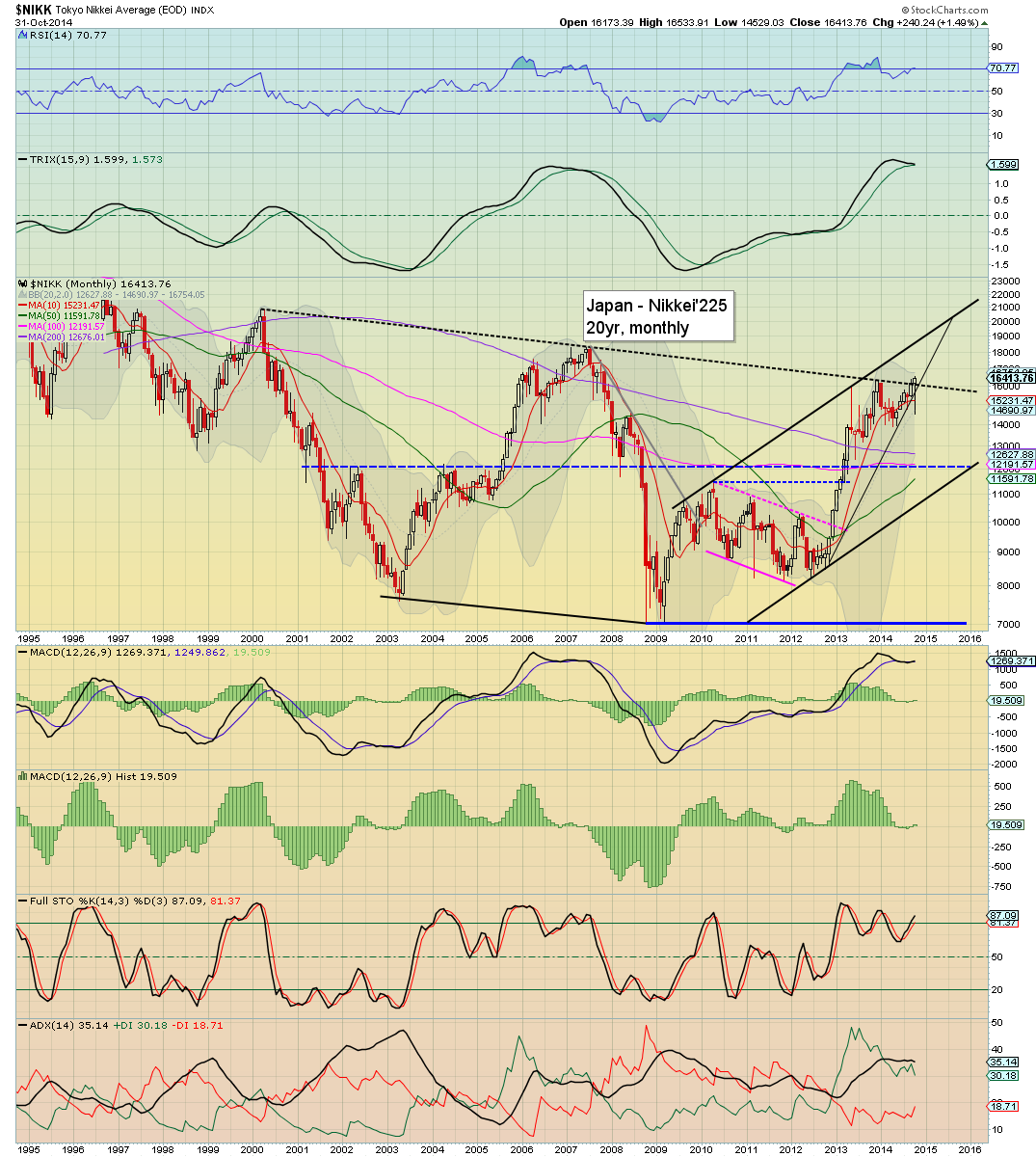 With renewed JCB (Japanese central bank) and Japanese Govt' support, the Nikkei climbed for the second consecutive month, with a net monthly gain of 1.5%. With the Govt' confirming it will be increasing its purchases of stocks (for the national pension fund), the Nikkei looks set to climb. Next upside target is the rather obvious giant 20k threshold, that is a clear 23% higher. 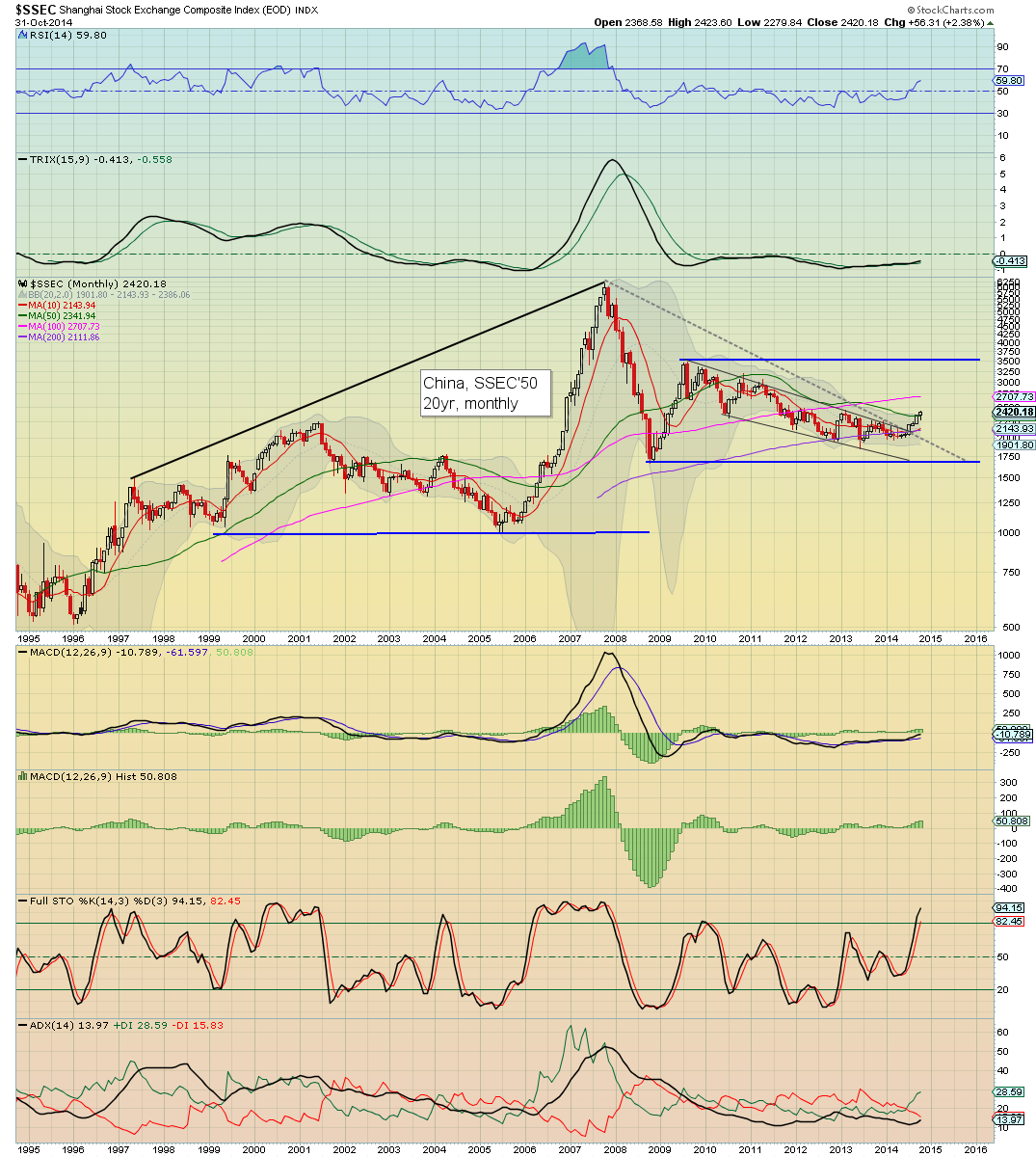 The China market closed higher for the sixth consecutive month, with a net gain of 2.4%. Having broken out of the declining wedge formation, the Shanghai Comp' looks set for a long battle to reach the next key resistance level of 3500.

October was the wildest month for world equities since late 2011. Many world markets broke rising trend/support, from 2012/11, or even from the 2009 lows. With a number of central bankers appearing at the same time, we have seen a truly disturbing hyper-ramp.

The monthly candles all look bullish... even for those indexes that saw net monthly declines. The tail spikes are highly suggestive of continued upside into year end.. if not beyond that.

Despite the end of the US Fed's QE3 program, it would seem that the JCB are going to pick up the slack. A near term retrace of 2-3% seems viable in the first half of November, but overall, the broader outlook now looks bullish.

Gods willing, I will be back on Monday.
Posted by Trading Sunset at 17:00:00
Email ThisBlogThis!Share to TwitterShare to FacebookShare to Pinterest

With new historic highs in the Transports and Dow, the broader market closed October in an especially strong manner. The sp' saw a net monthly gain of 46pts (2.3%) to 2018, but it is the spike-floor candle that is highly suggestive of continued gains into year end. 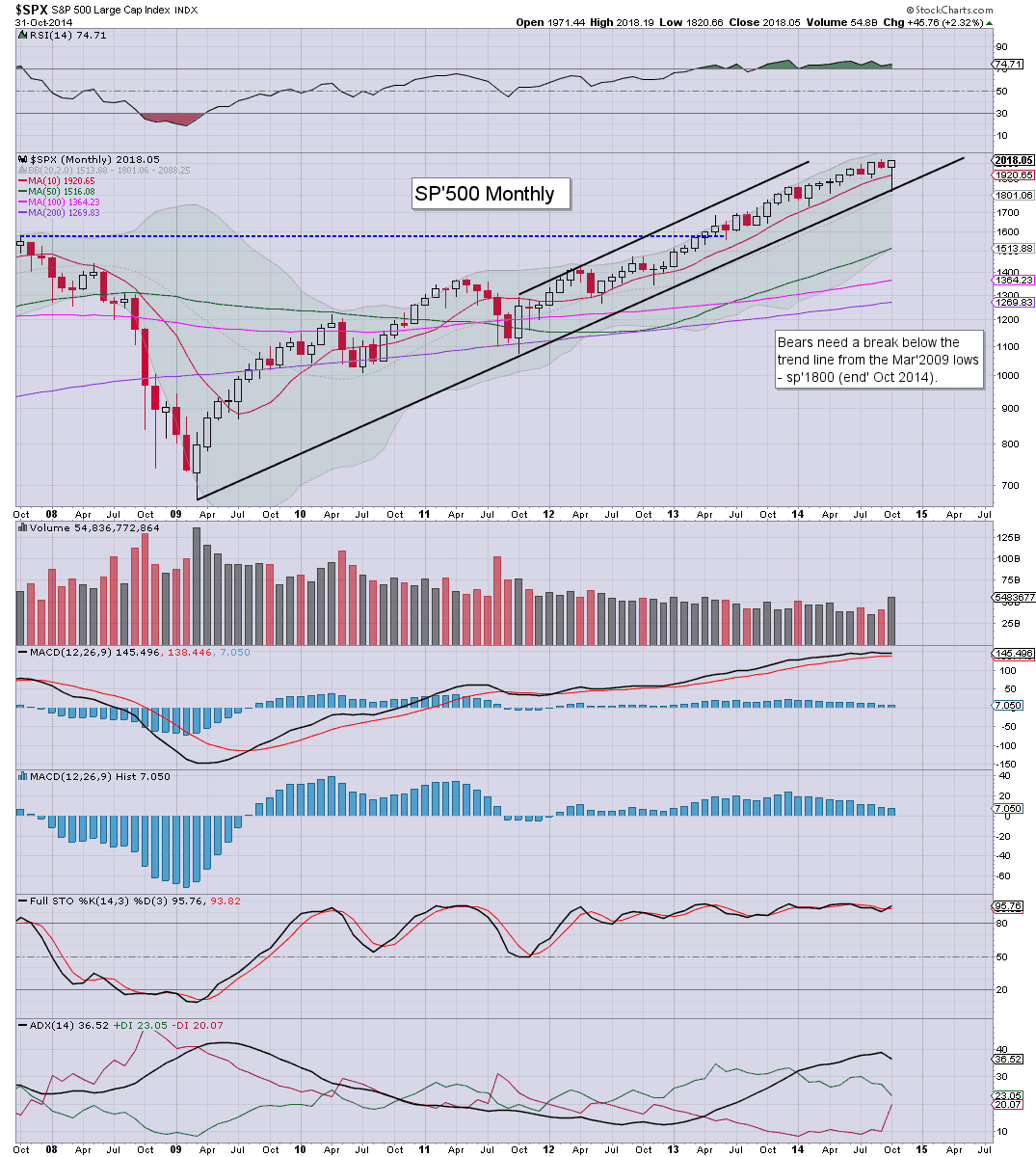 *ignore the downside targets, those are all now on hold.. and will be removed on any move >1213. 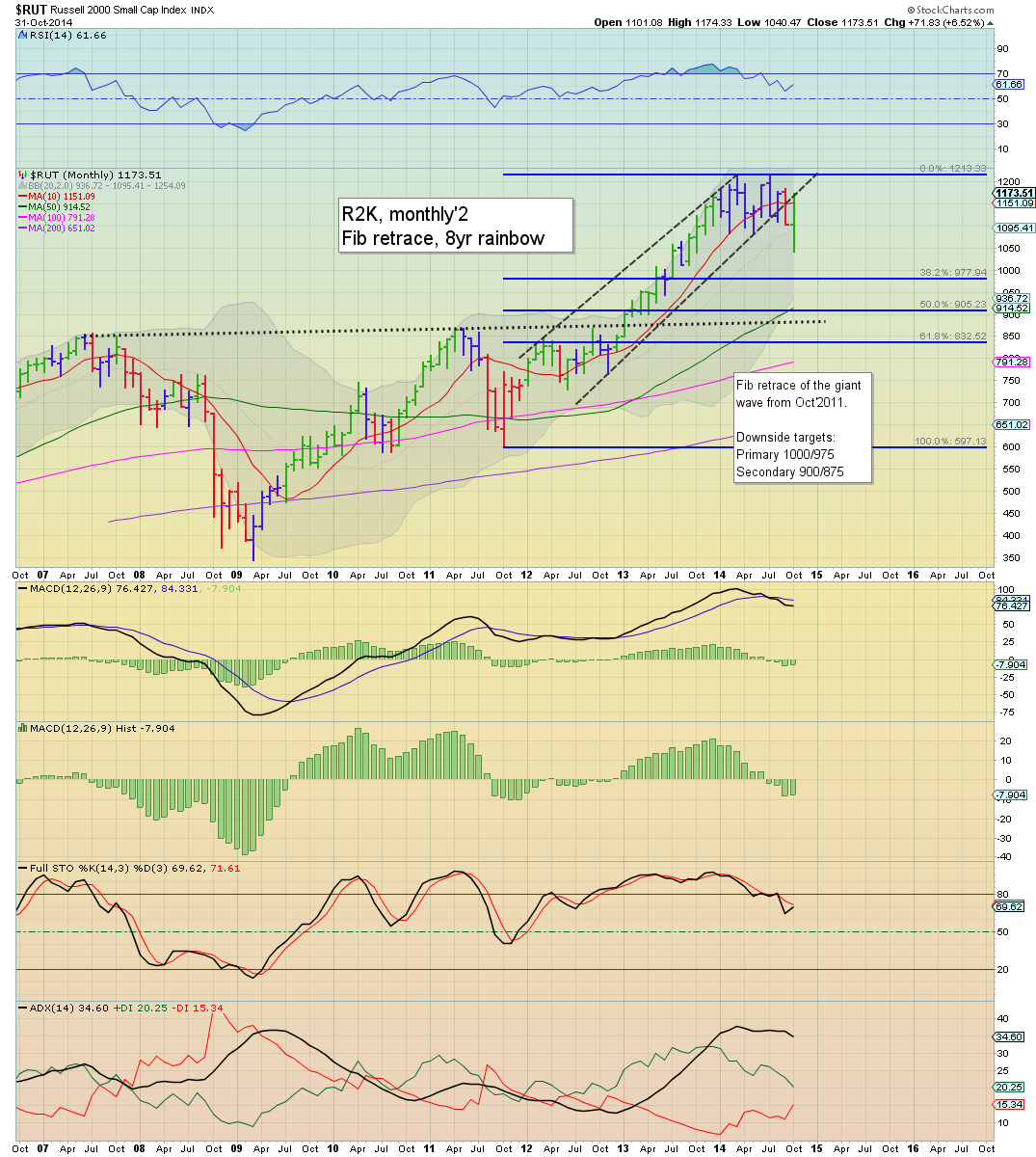 The closing green monthly candle bodes for further upside. The double top of 1212/1213 is now at threat of being broken by year end... and if that occurs, then it has to be asked.. just how high will the R2K go then?

*the weekend update will be on the world monthly indexes
Posted by Trading Sunset at 03:00:00
Email ThisBlogThis!Share to TwitterShare to FacebookShare to Pinterest 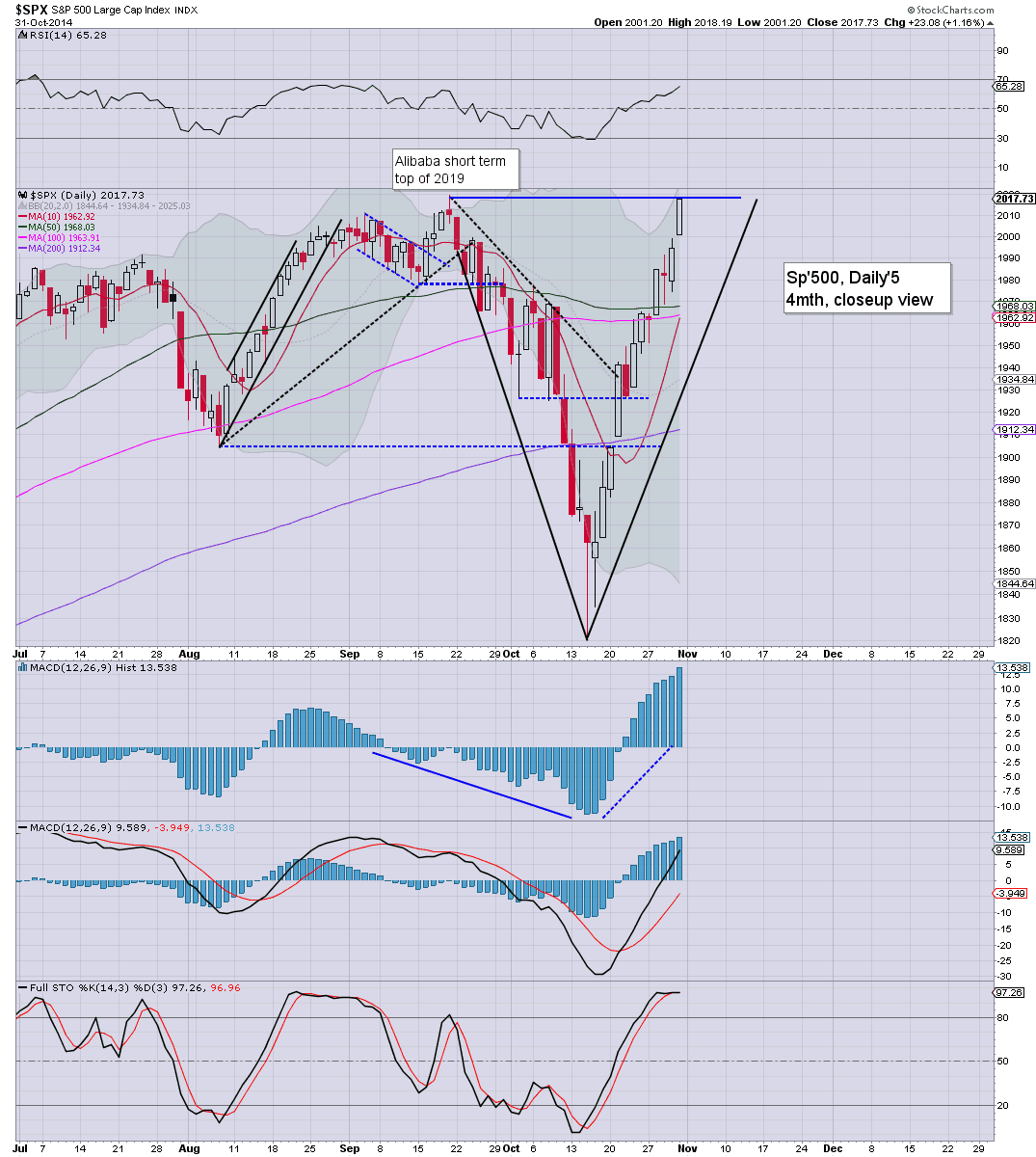 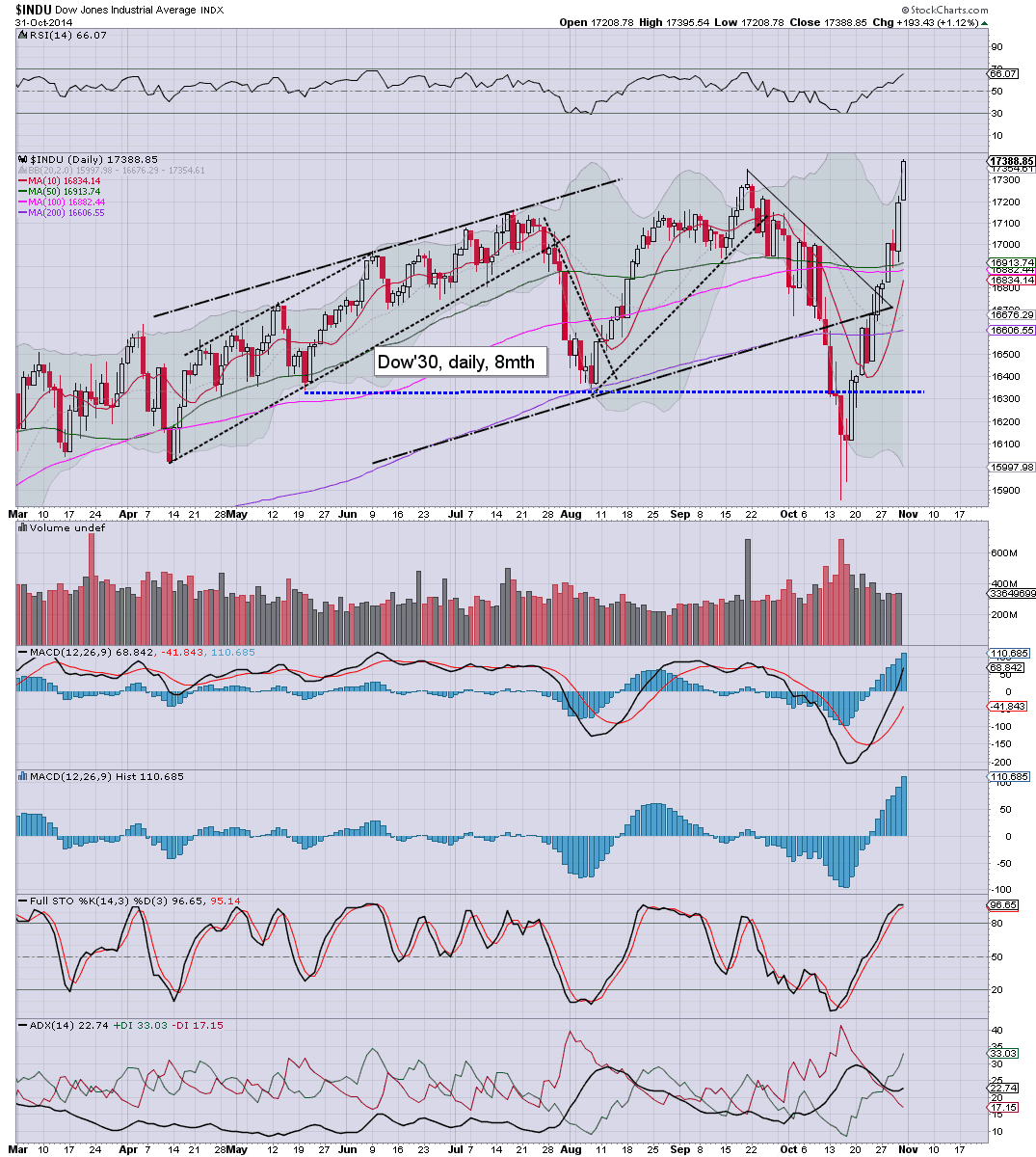 The crazy ramp continues... with the Dow following the Transports, which itself broke a new historic high on Tuesday.
--