The main indexes are still bullish on the daily cycles, and it is true the VIX daily chart is still bearish, yet we're probably very close to the floor in the VIX. I'd be very surprised if we break new index highs sp>1422, and I can't envision a VIX in the 12s. No way. Not unless the Bernanke announced QE3, and frankly, we're done with that argument until mid August at least. 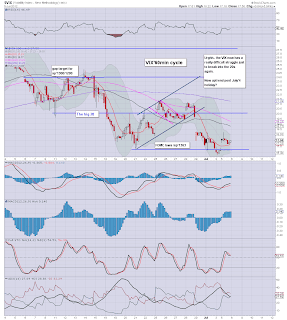 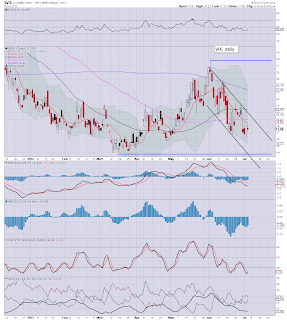 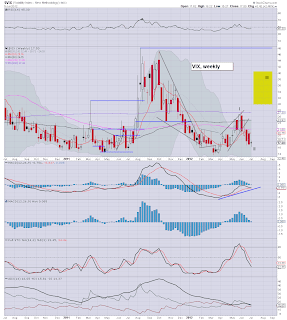 Forming a VIX floor can be a real messy affair, so even if we see some sort of leap higher tomorrow to the 20.0 level, there is still likely to be a pullback of 5-7% within a day, if not hours.

It remains the case there is still very high possibility of the VIX exploding into the 30s and 40s within around 2-5 weeks.

Moderate weakness in the late afternoon, but still closing above the morning lows. Mr Market now awaits the monthly jobs data tomorrow at 8.30am EST.

What is clear...we remain in a broad uptrend, its getting a bit choppy, but this remains at least a near term bull cycle. 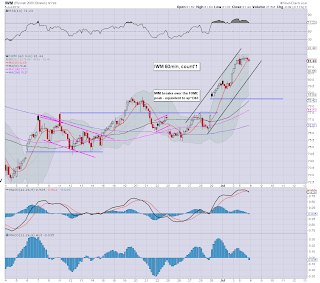 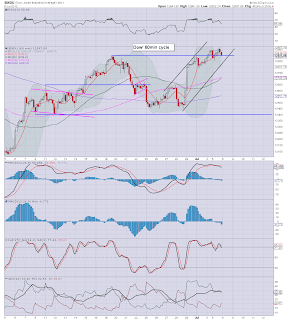 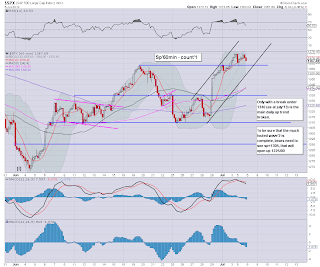 We could well be forming a typical choppy top, the bears tomorrow will need to see considerable losses tomorrow, just to get any kind of down cycle started. All things considered, that seems unlikely. Anything less than dow -175pts...is NOT to be taken seriously.

More later, where I will look ahead to Friday, suffice to say, best guess for the next Disney jobs number +30/35k. But will that mean 'bad news = QE....so its good news!'....maybe.
Posted by Trading Sunset at 21:03:00
Email ThisBlogThis!Share to TwitterShare to FacebookShare to Pinterest

Considering the opening losses, today is yet another annoying day for even the big money bears who are patiently waiting for the bigger picture to play out.

So far there is nothing to suggest any significant downside. Even worse, near term, the 60min cycle might be floored, and ready to surge back upward.

Lets be clear, if Mr Market likes the jobs data tomorrow - or uses its reverse logic that 'bad news is good QE news', the micro-cycles are now reset, and primed for a further up move. 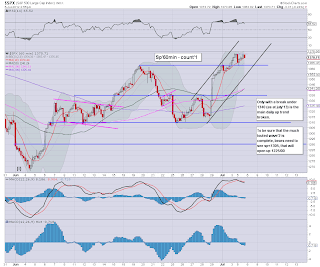 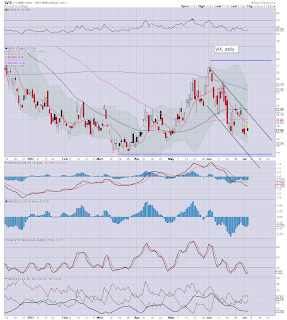 A quiet day, the interesting aspects remain the action in individual stocks like JPM, PCX (hyper short squeeze), and continued melt up in AAPL.

It is laughable though, that after the BoE initiate the (US per capita equivalent) of $450bn QE, the EU and China cutting rates...and all we have is a flat market.

Those bull maniacs seeking new index highs this summer, they need nothing less than the Bernanke to appear, and to spin up those digital printers.

More after the close.
Posted by Trading Sunset at 19:57:00
Email ThisBlogThis!Share to TwitterShare to FacebookShare to Pinterest

With the action as quiet as it is, its kinda hard not to fall asleep. 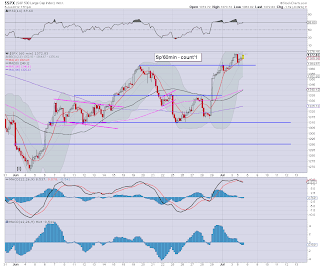 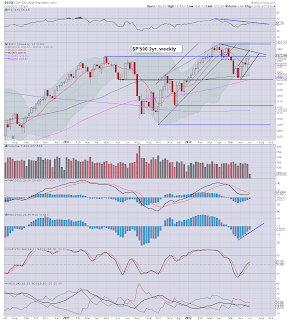 The weekly chart gives good perspective for those looking for doom. The weekly 10MA of 1335 will be first support in any pullback, and that is a fair way lower from here. Bears are going to have a real tough time breaking below 1340/30 next week.

From a MACD cycle perspective, we could already be forming a rounded cycle floor, and trundle higher into tomorrow. There is even the possibility of a Friday close in the 1390s. Will Mr Market rally on 'bad jobs news = Qe3 in August' ?

Those bears shorting this afternoon ahead of the jobs data, its pretty risky, not least with the 60min cycle arguably putting in a rounded floor.

A new short around 1390/1400 (see daily charts) would appear to be the first 'safe zone' for new bear positions.


Posted by Trading Sunset at 18:53:00
Email ThisBlogThis!Share to TwitterShare to FacebookShare to Pinterest

After the opening losses, those bears getting excited will doubtless be frustrated by now. There is no decisive break lower, and we could still close green. 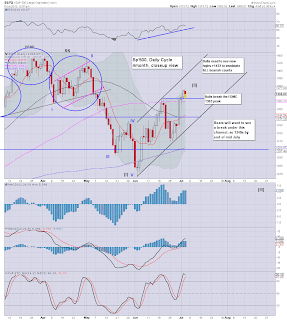 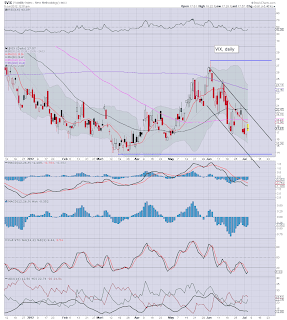 A relatively quiet afternoon chop in the 1365/75 range seems likely. As noted earlier, even a break lower to 1330 would still keep things within the new up trend.

VIX remains low, and the gains so far are still weak.
Posted by Trading Sunset at 17:54:00
Email ThisBlogThis!Share to TwitterShare to FacebookShare to Pinterest

12pm update - eyes on the meddler

Whilst the market is doing its usual nonsense intra-day bounce, a reminder that JPM is having 'issues'. There is the likelihood the 'bad London trade' might total more than $10bn. There are also other matters that will likely severely impact the next 2-4 quarters. 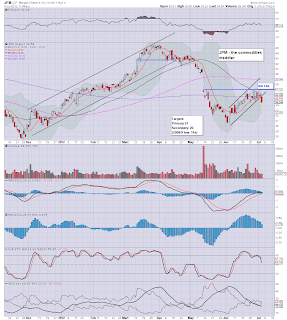 Interestingly, its now certain JPM will experience a death-cross in the next few days, where the 50MA crosses under the 200MA. The fact the 10MA has also now failed to break above both, is also very bearish.

The overall formation is a clear bear flag of course, and todays move lower is a VERY clear break. My target is indeed $27..a move into the 26s would indicate $20 later in the year.
--

meanwhile, back at the big wheel... 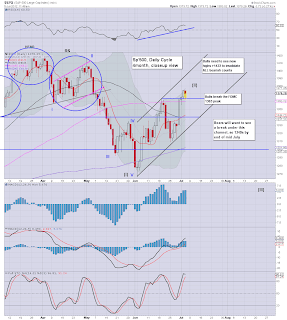 I'm not expecting anything from today, we'll probably close flat, or even a touch green. There is nothing in this market right now suggesting downside. Even if we do start properly slipping lower tomorrow, even a move to 1330 doesn't break the up channel, so bulls have a clear 40pts buffer zone.

Time for lunch!
Posted by Trading Sunset at 16:50:00
Email ThisBlogThis!Share to TwitterShare to FacebookShare to Pinterest

11am update - I can't take any of it seriously

Well, its almost a 'normal' day in market land again. We've had a mixed batch of econ-data, news from the EU, and..more QE.

The interesting thing about the Bank of England QE...if you adjust it for population, relative to the USA (x6.25 or so)...you end up with an equivalent QE of $450bn. That's a pretty significant number. I'm not sure how much that degrades the UK money in circulation, but..it sure ain't going to help savers. 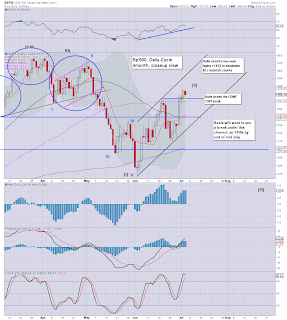 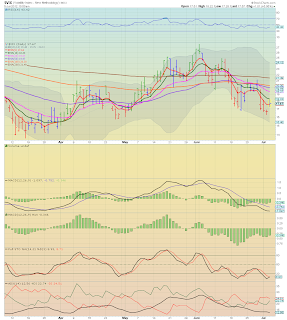 I can't take anything seriously today, its ALL nonsense. This market can't be trusted until we're either breaking new index highs >1422..or below 1305. I guess the day-traders will be enjoying today so far, but the swing traders on both sides will arguably be getting annoyed already.

Daily trend remains UP, but the MACD cycle is starting to show the first sign of topping. The higher VIX is certainly confirming the index losses, but a VIX <20 can't be taken seriously either.

I suppose the bears could look for a 4-5 day topping pattern like we saw at the end of April. For now though, there is NO sign of a clear turn lower.

Its all noise...so far.
Posted by Trading Sunset at 15:51:00
Email ThisBlogThis!Share to TwitterShare to FacebookShare to Pinterest

Whilst the BoE prints more (that will solve everything, right?), the ECB cuts rates, market seems to be losing the hysteria since last Thursday afternoon. Mr Market will soon be desperately looking for its next fix, where will it come from next time? Maybe another rumour about LTRO'3 ? 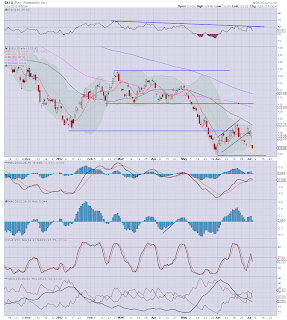 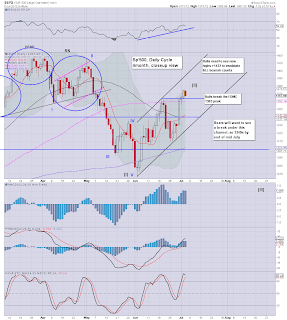 I'm really not expecting anything much today, things won't be clearer until after the monthly jobs data..and the style in which the market closes the week.

Bears can't really get excited until a break under 1305. Right now, that is a very long way down, and we sure won't be there until next week.

More across the day 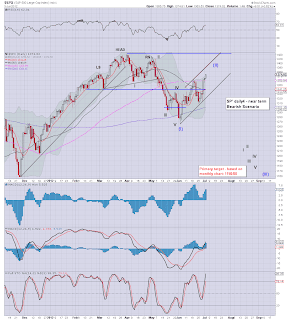 On a slightly broader perspective you can see we are still in an up trend since the June sp'1266  low. There is NO sign of a turn yet, and a levelling stage (which would be pretty normal), would often take 3-5 days in itself.

Lets see what the econ-data is, and whether Mr Market wants to ramp towards that upper channel line of 1390/1400 by the Friday close.