World equity markets were very mixed in July, with net monthly changes ranging from +7.5% (China) to -4.3% (Germany). A number of markets are showing preliminary breaks outside of their upward channels, notably the US DOW, and UK FTSE. 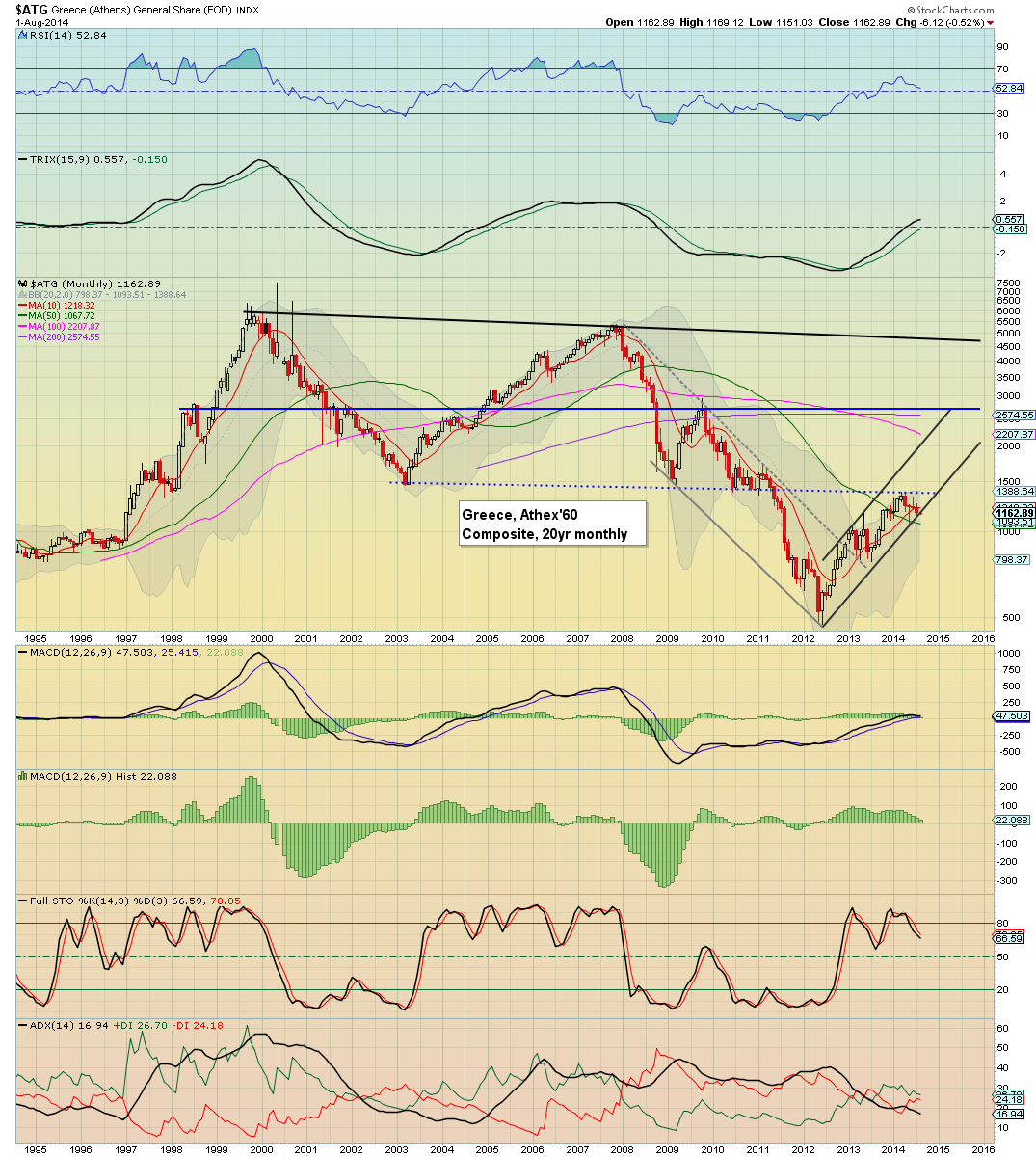 Having got stuck in the 1300s, the Athex is in imminent danger of breaking the broader upward channel from the summer 2012 low. There is viable downside to the 1000/900 zone, if the EU markets are spooked into late summer/early Autumn. 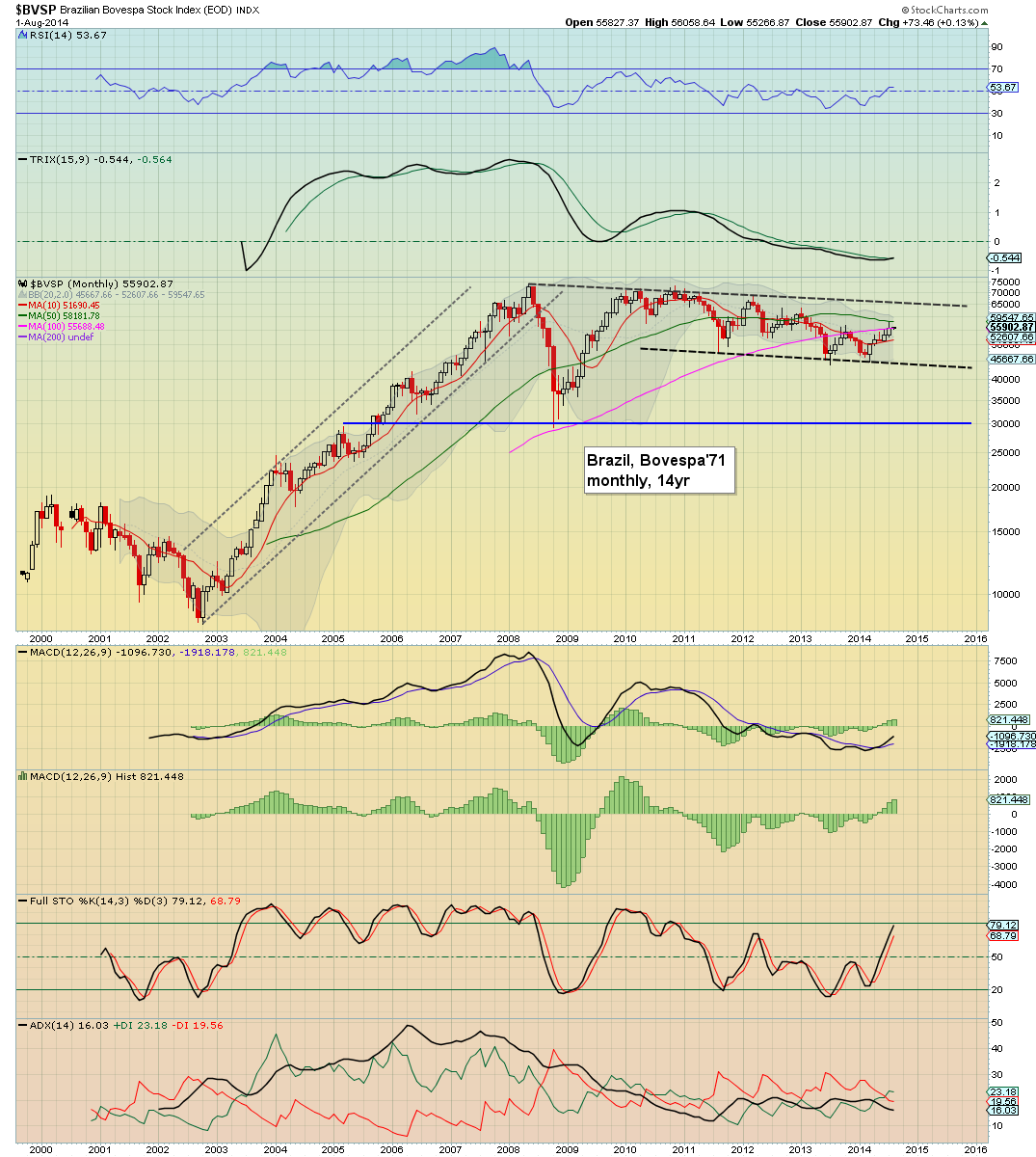 The Brazilian market had a strong July, gaining 5.0%. Near term outlook is bullish, although the July monthly candle was a little spiky. Equity bears need a break back under the big 50k level, but that is a clear 10% lower. 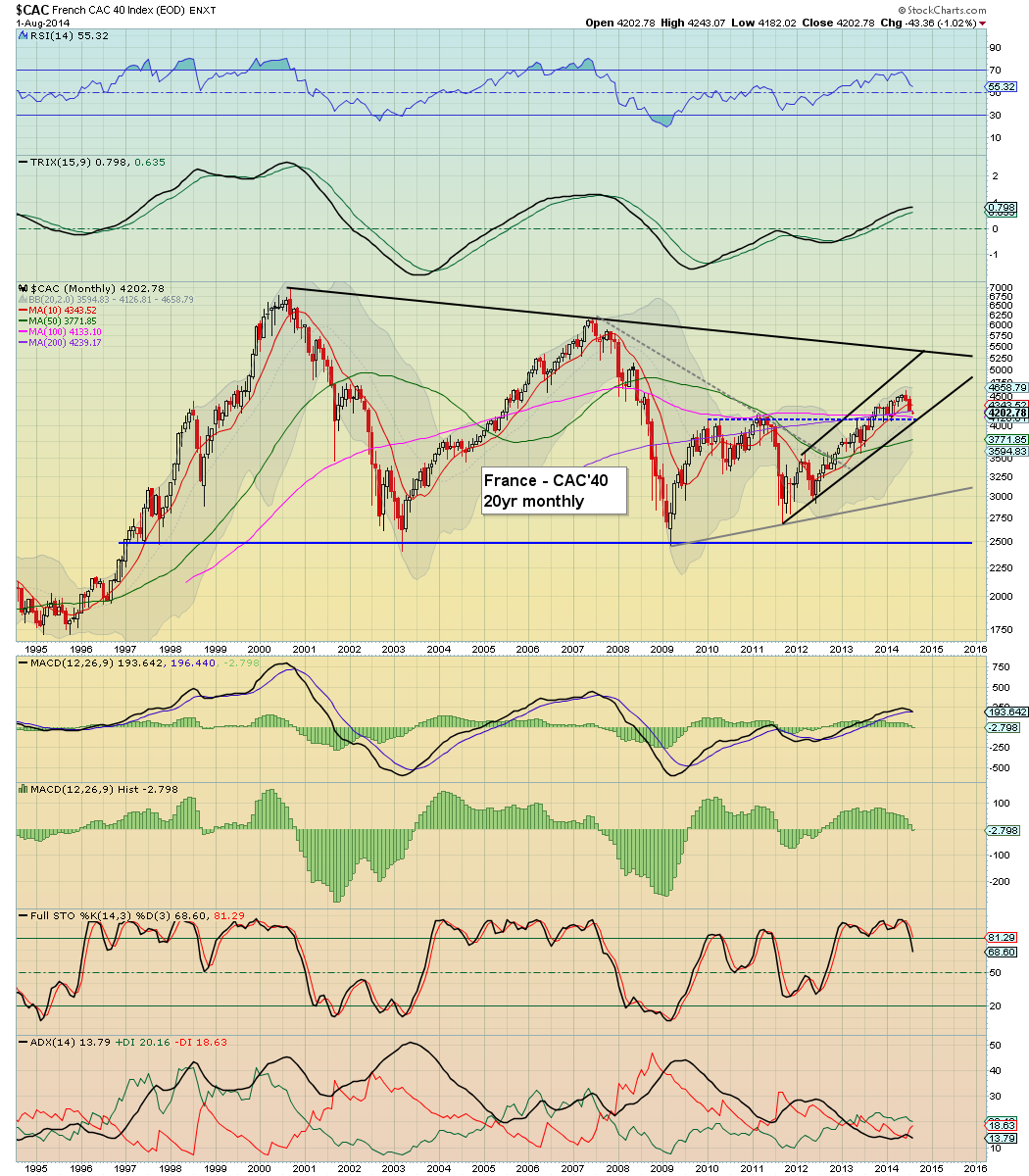 The French market lost -4.0% in July, with the big 4k threshold remaining first key support. If that fails.. there is open air to the 3k level. 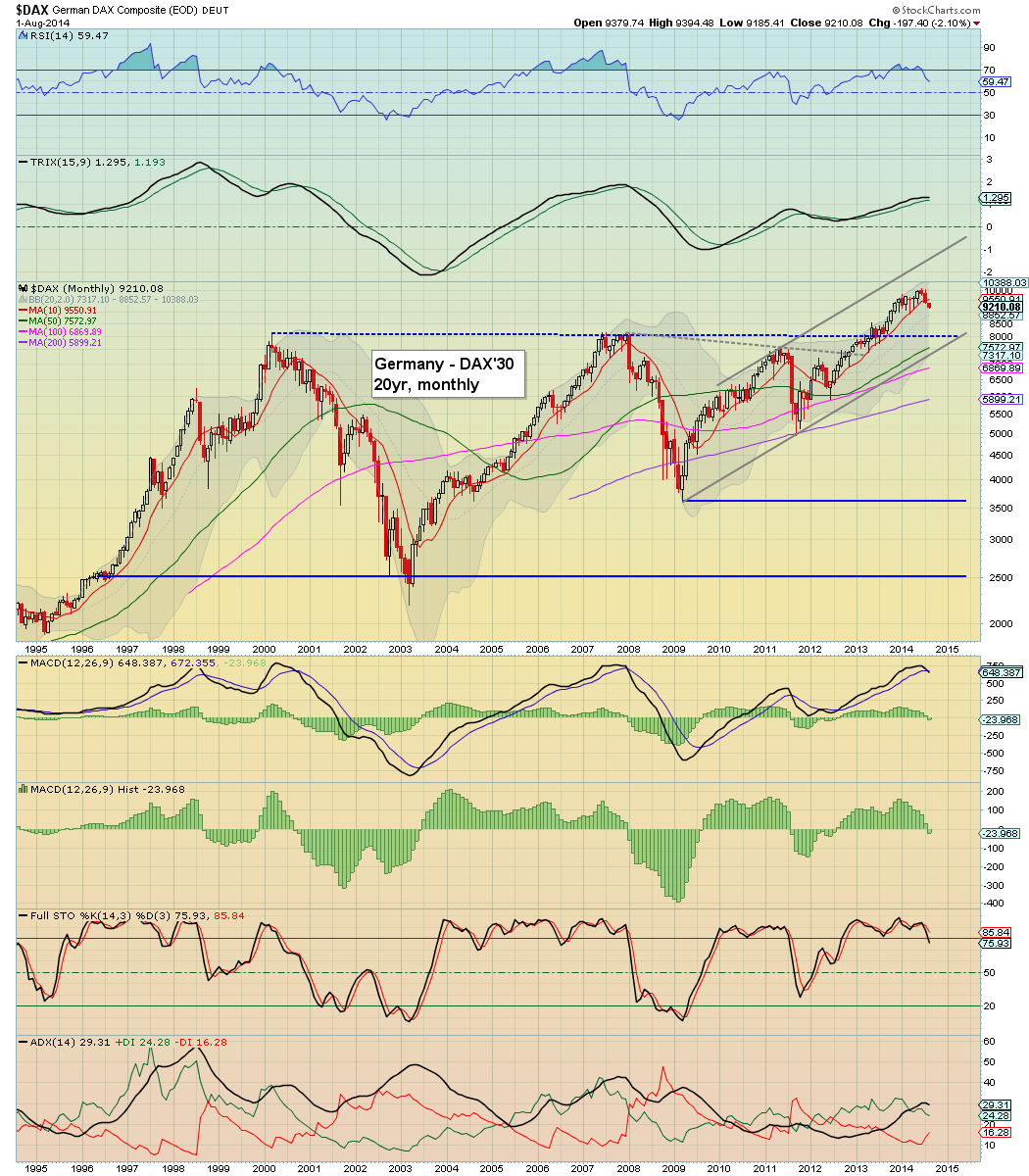 The DAX was the weakest of the indexes (of those I follow) in July, slipping a rather significant -4.3%. First key support is the 8k level, which is around 13% lower. A break under 8k would be very surprising, with secondary support on rising trend, around 7500. 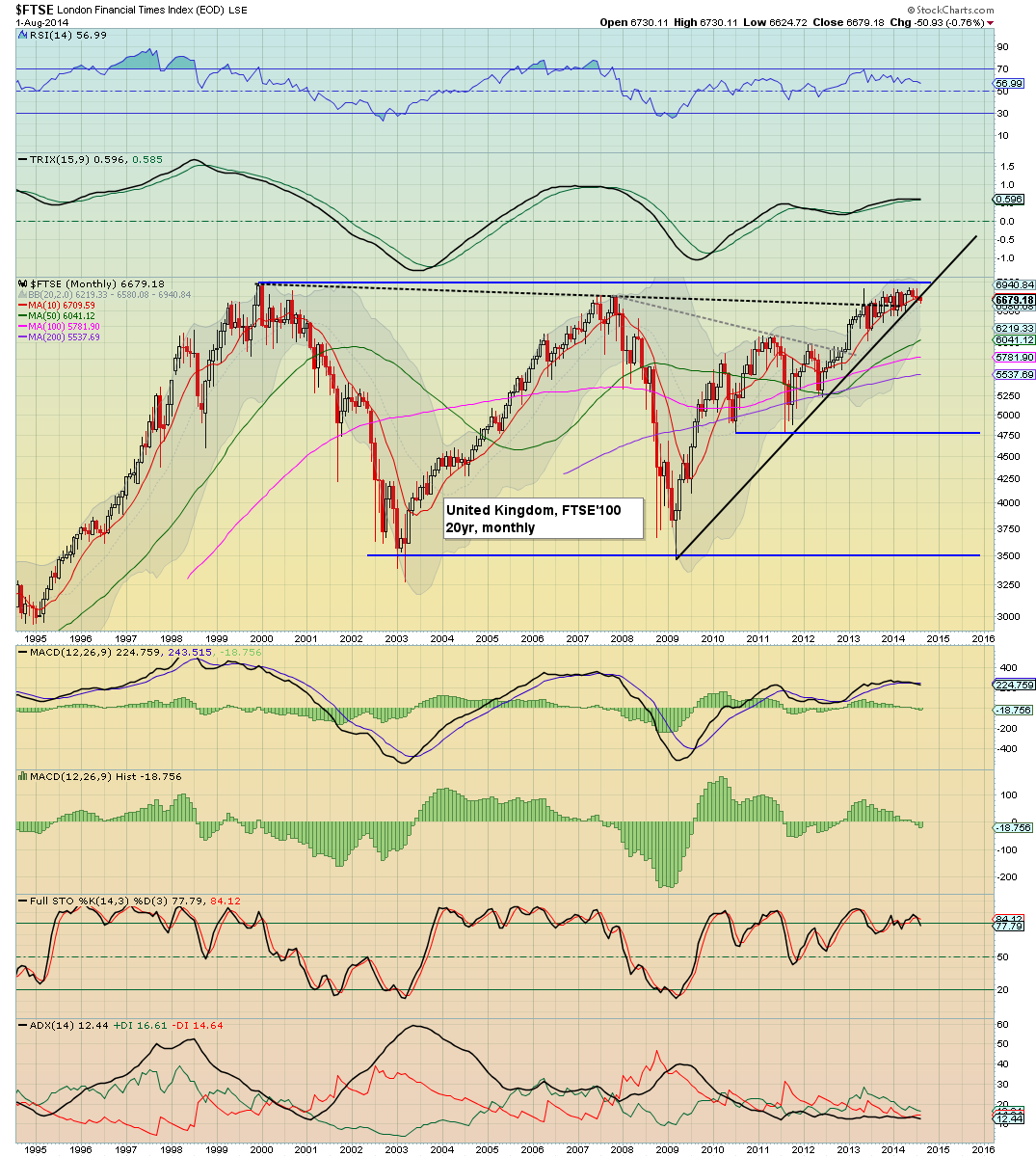 The UK was essentially flat for July, and is now trading sideways.. outside of the rising channel. First big support is the 6k level. It remains notable that the FTSE is yet to break above the Dec 1999 high.. and has been pretty much stuck for the past year. 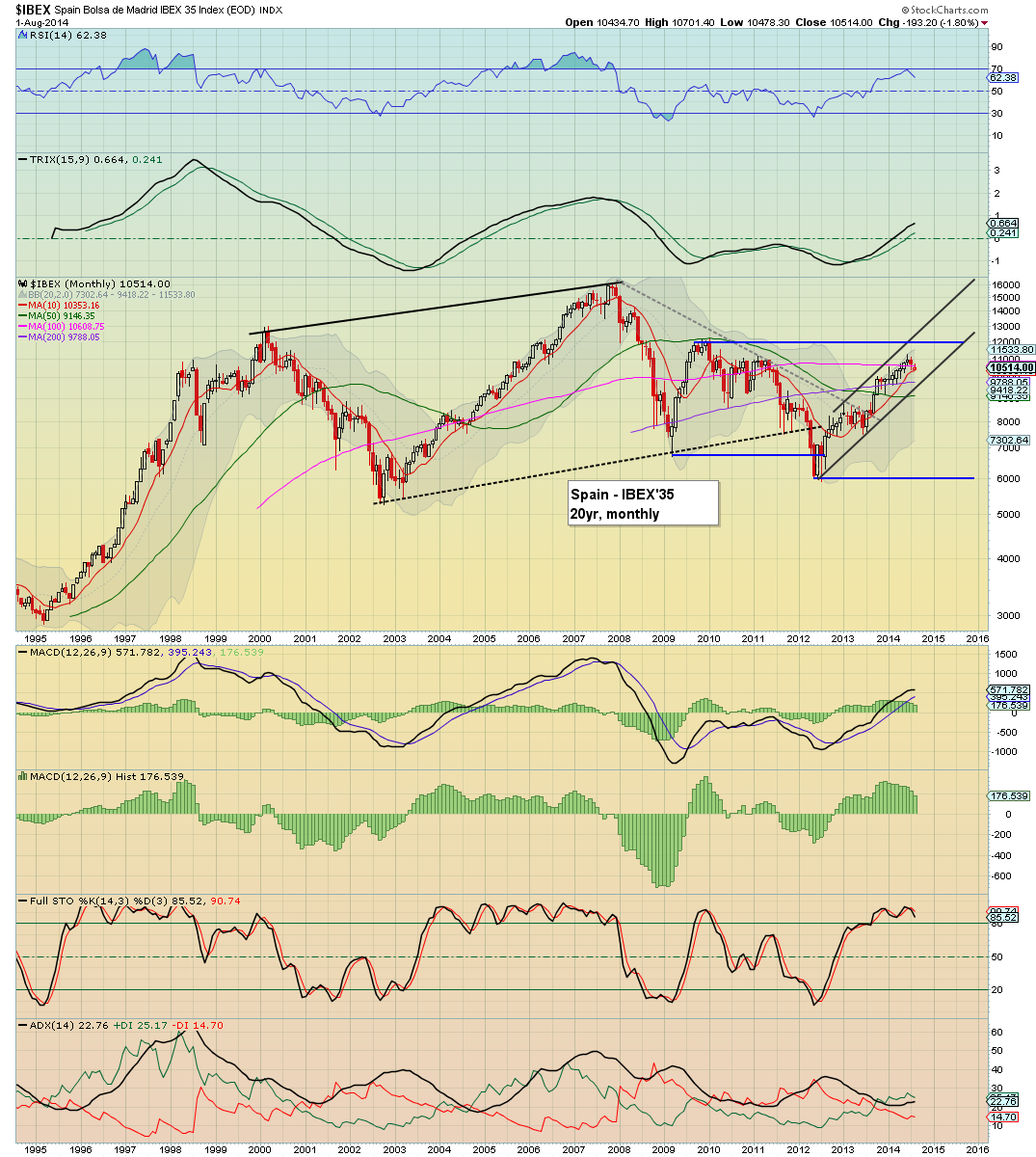 The Spanish market lost -2.0% in July, and has already started August on a weak note. The IBEX needs to hold the giant 10k level, otherwise.. there is the real threat of a major washout down to 8k. 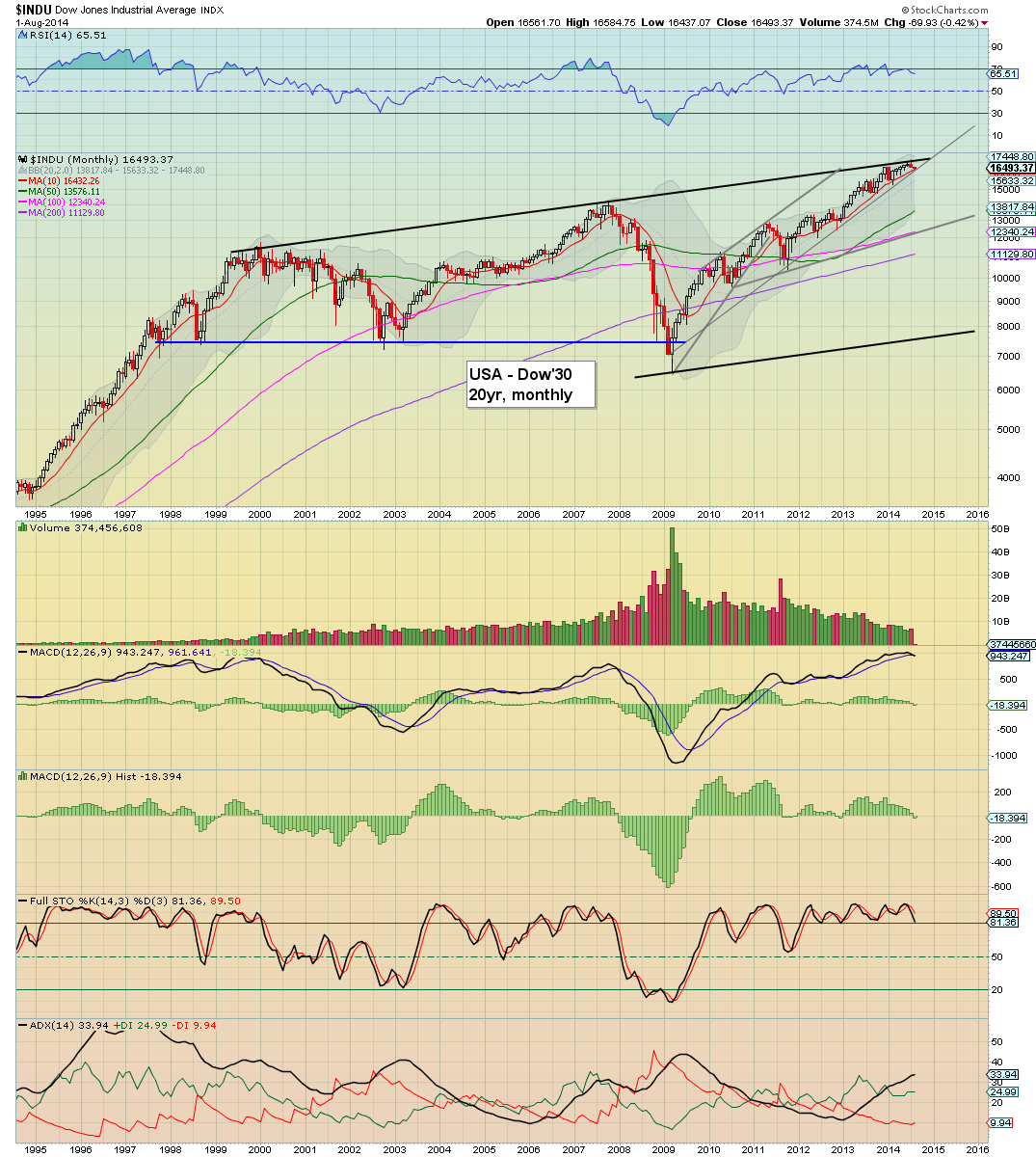 The Dow declined by a net -1.6% for July, and is starting to break outside of the rising channel. First key support is around 14k.. where the lower monthly bollinger band will be in the next 2-3 months. On no outlook can I envision the Dow much below 14k this year. 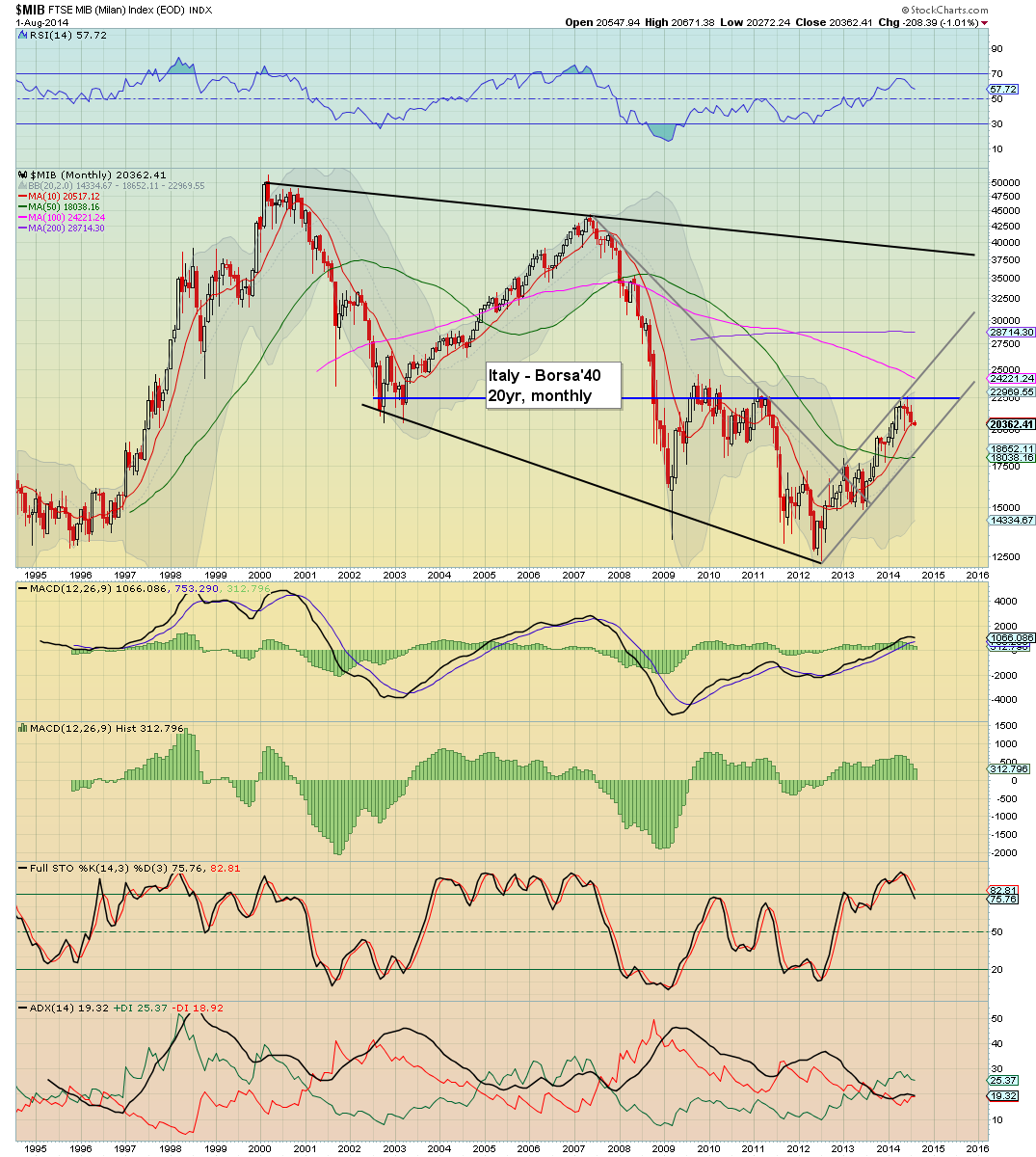 The Italian market is having a difficult time, and is currently lower for the fourth consecutive month. The IBEX is currently trading below the monthly 10MA, next support is around 18/17k.. which is a fair ways lower. 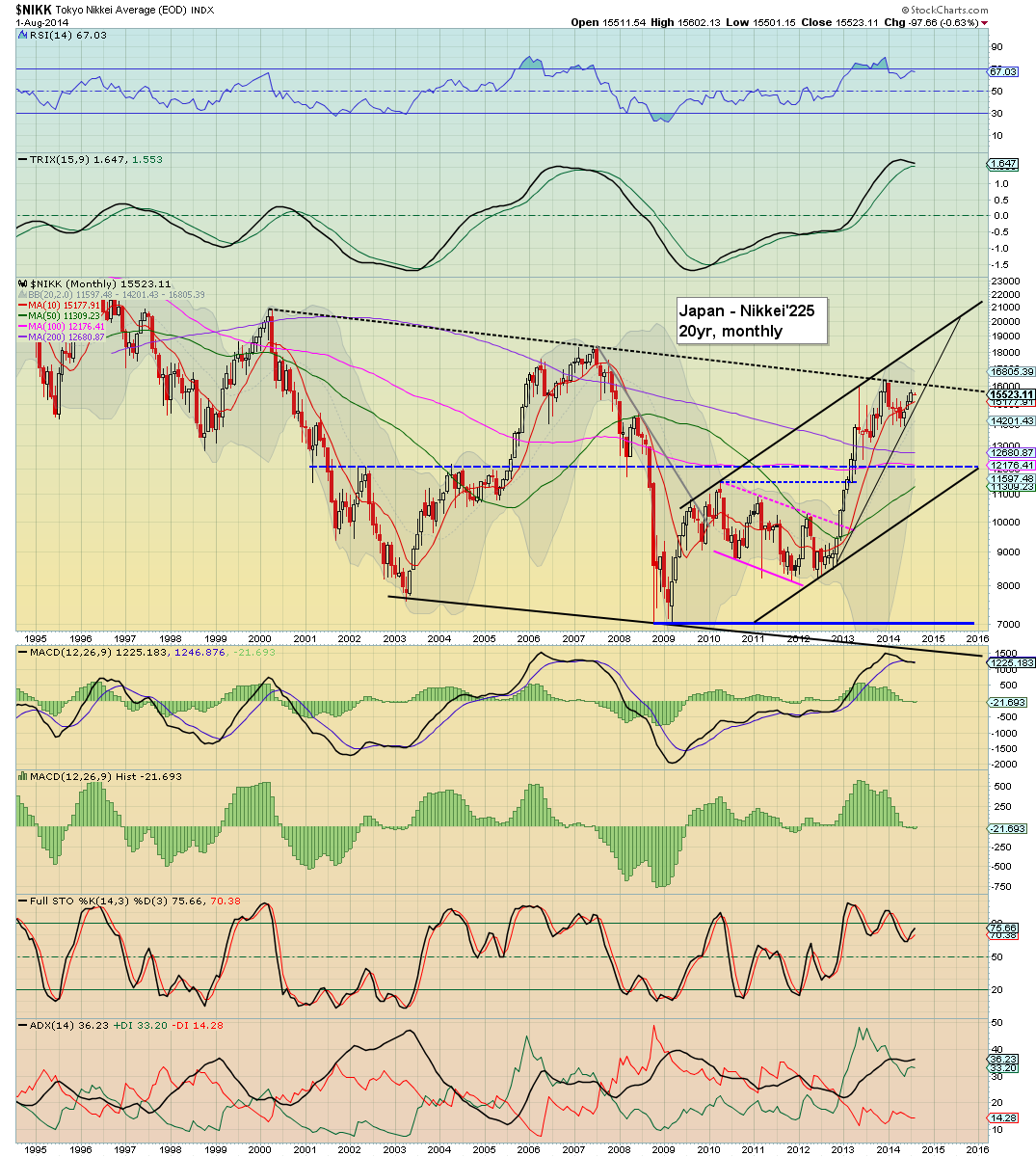 The Nikkei gained 3% in July, and continues to remain on the edge of breaking the multi-decade down trend. Equity bulls need a break into the 16000s, which would open up 19/20k in early 2015.

However, if most other world markets continue to weaken, then the Nikkei will probably fail to push any higher. First downside would be 12k... secondary 11k. A break under 10k looks extremely unlikely, not least with the JCB still meddling. 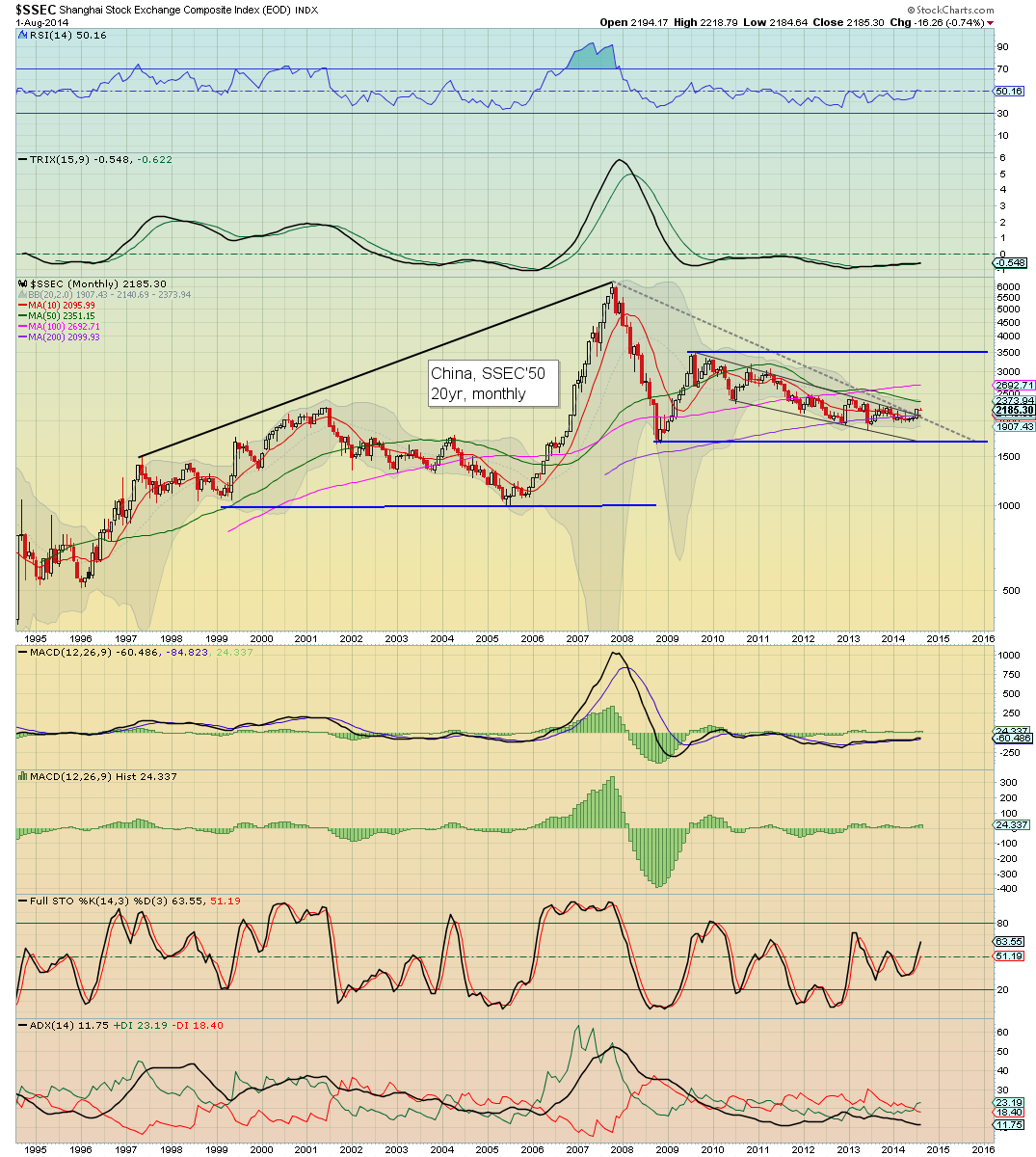 The Shanghai composite was the strongest index in July, gaining a powerful 7.3%. There is a possible breakout, with first upside to the 2300/2500 zone. For the bears, the 2000 level remains key, another failure under that would open up the 1700s.

So.. of ten markets, 3 net higher for July, 1 flat, 6 with rather significant declines.

It could be argued we are in the very early stage of a multi-month decline, but bears should be seeking at least another net monthly decline before getting overly excited about where we might be trading in the early Autumn.

The gains in Japan and China are especially notable for the bulls, although they are still two indexes that are hugely depressed from their historic highs.

There will be further corporate earnings of course, but as for econ-data.. there isn't anything too significant.

Tuesday will see a small array, inc' factory orders, but really, there isn't much else of note.

*there is QE-pomo next week totalling around $5bn, of which $2bn will be on Thursday.

A major weekly victory for the bears

Despite some early gains in the week to sp'1984, the market unravelled, with a very significant decline to 1916. A great deal of technical damage has been done, and with the monthly cycles offering a rollover, equity bears have a real chance of much lower levels. 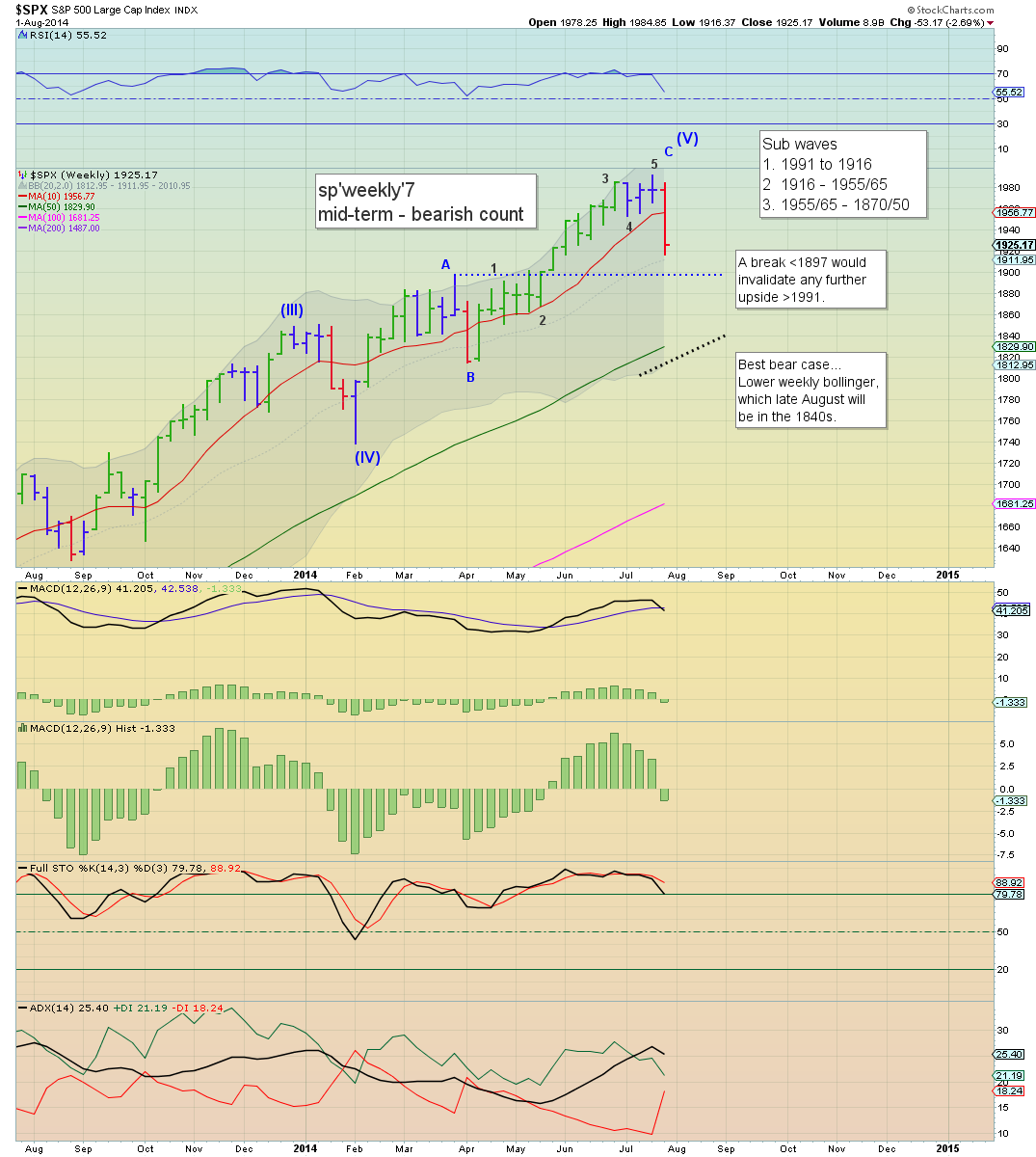 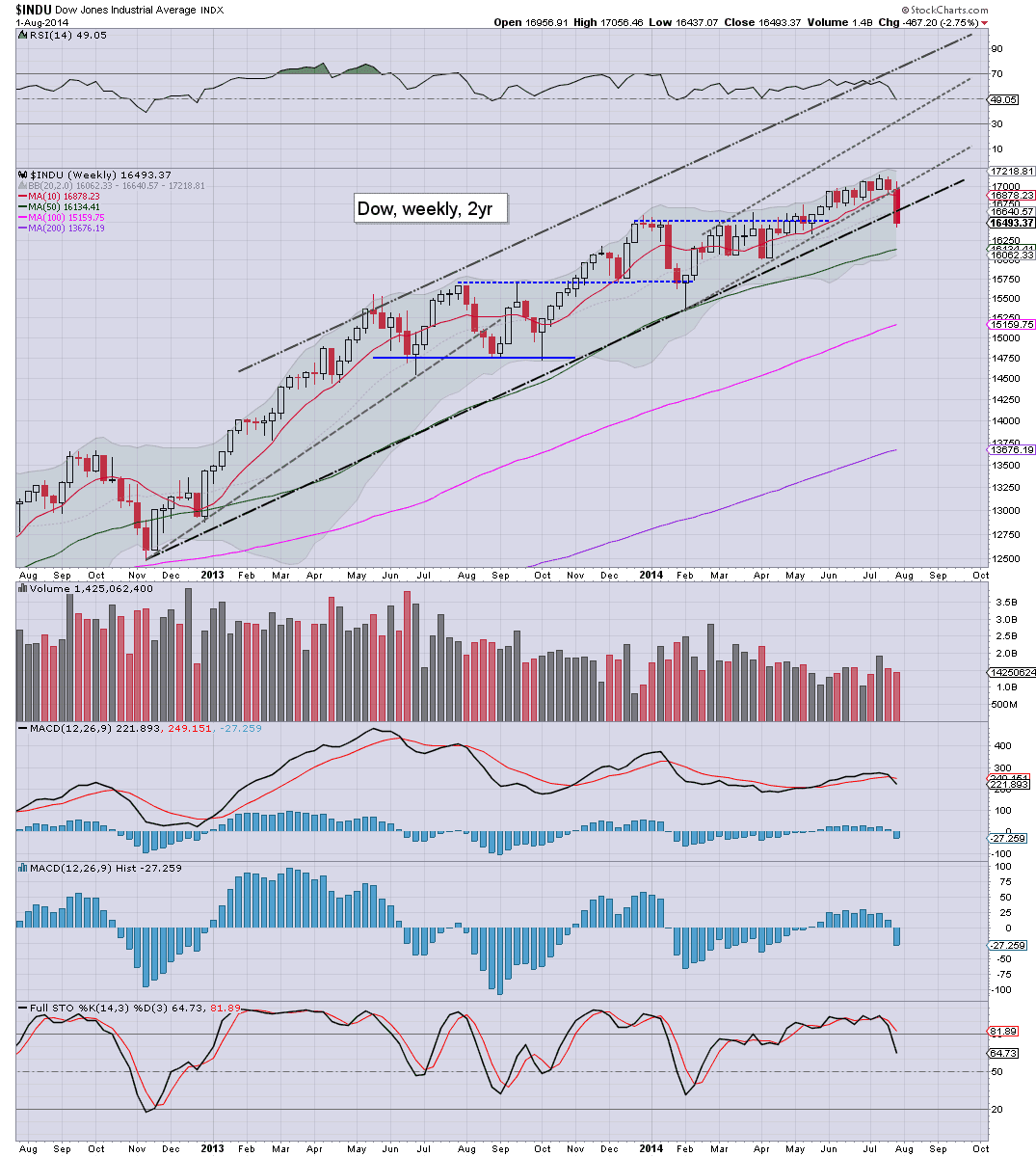 *the sp'weekly7 chart is the most bearish scenario in my view.

What is absolutely clear, a break <1900..and more specifically, 1897 - the late March high, would be HIGHLY suggestive that 1991 was a key mid term high..and one which won't be broken for many months.
--

With the break <1960, there are now a great many more outlooks. The good thing, the levels are pretty clear.

Goodnight from London
-
*the weekend update will on the World monthly indexes
Posted by Trading Sunset at 04:00:00
Email ThisBlogThis!Share to TwitterShare to FacebookShare to Pinterest 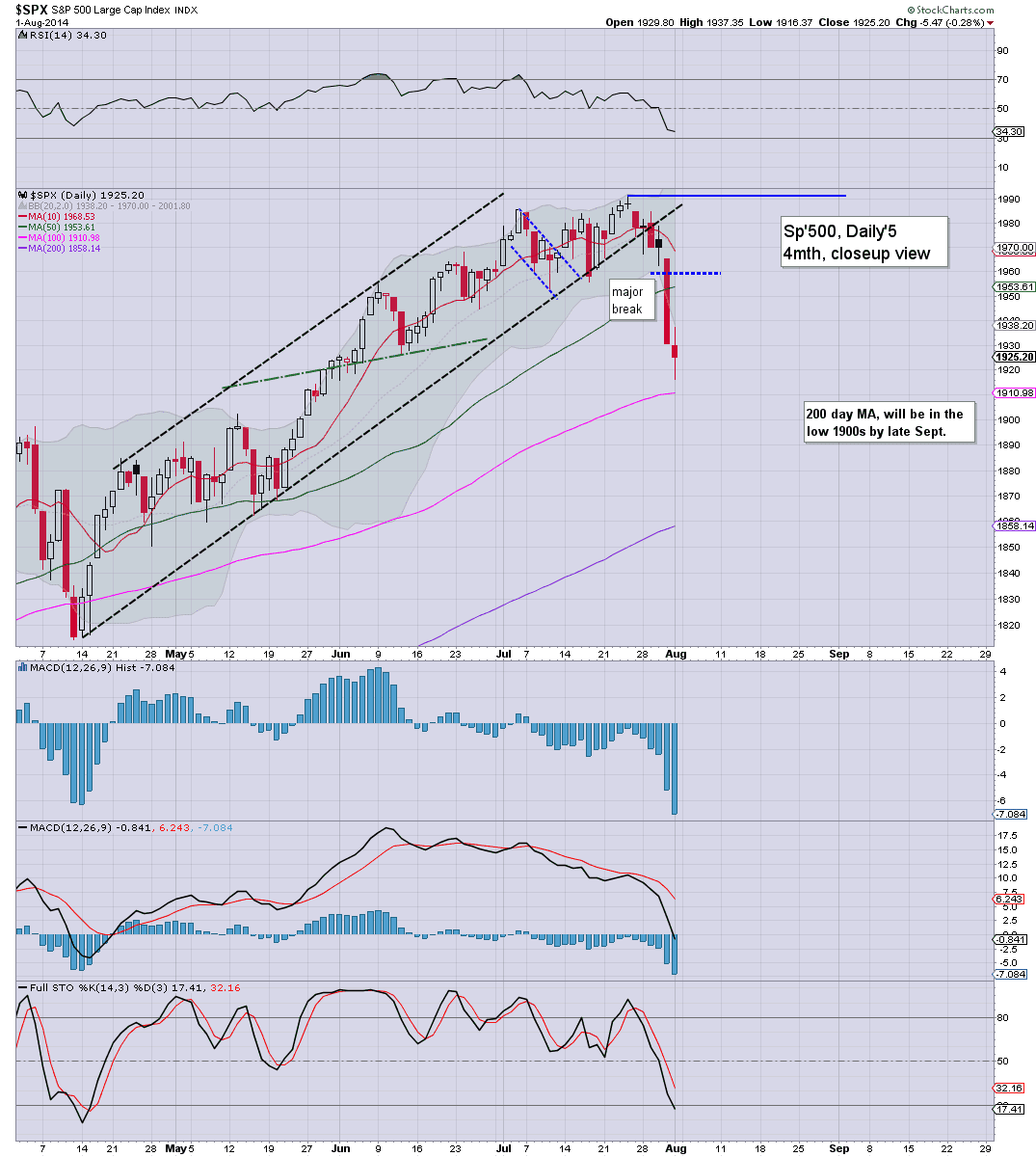 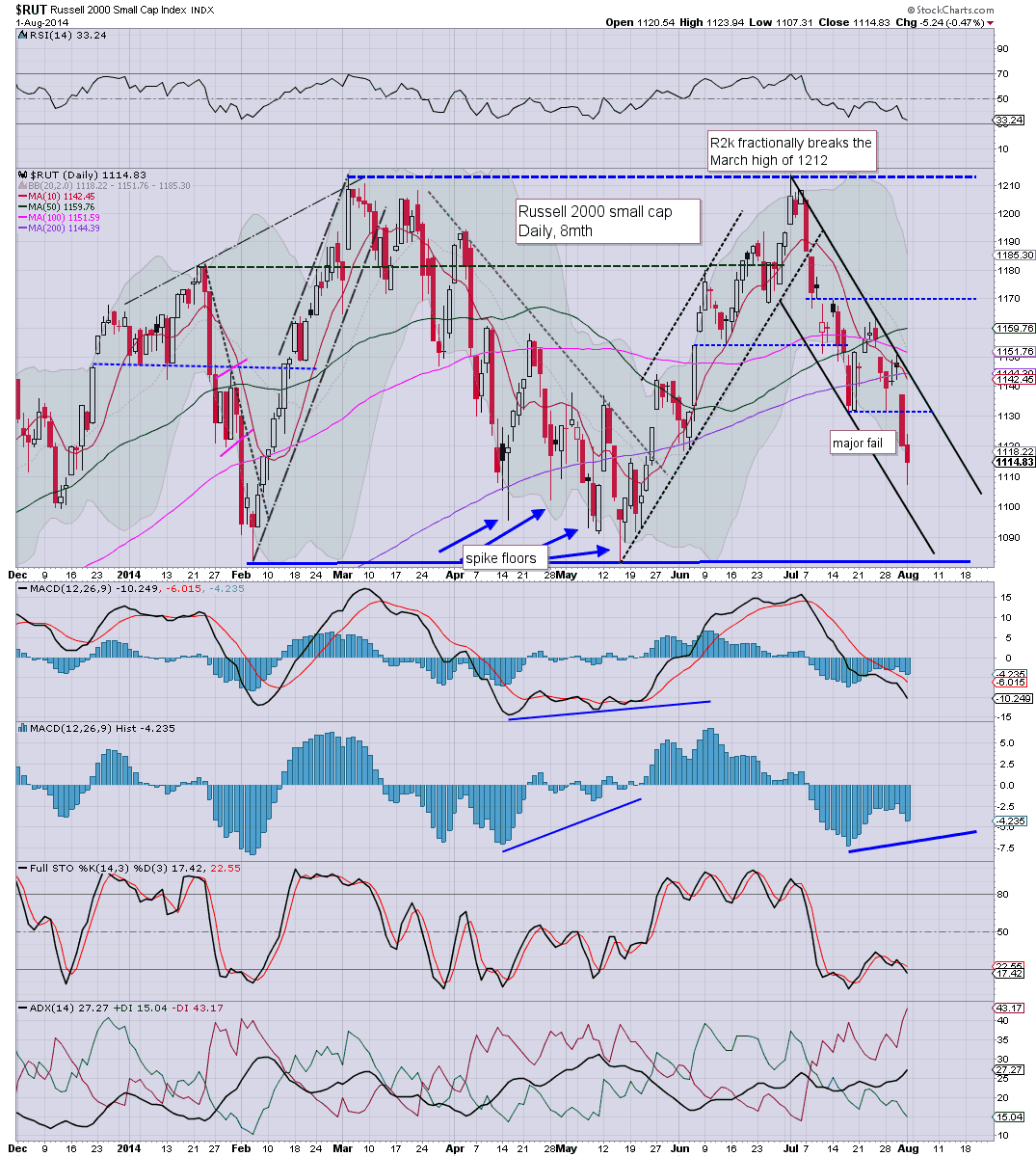 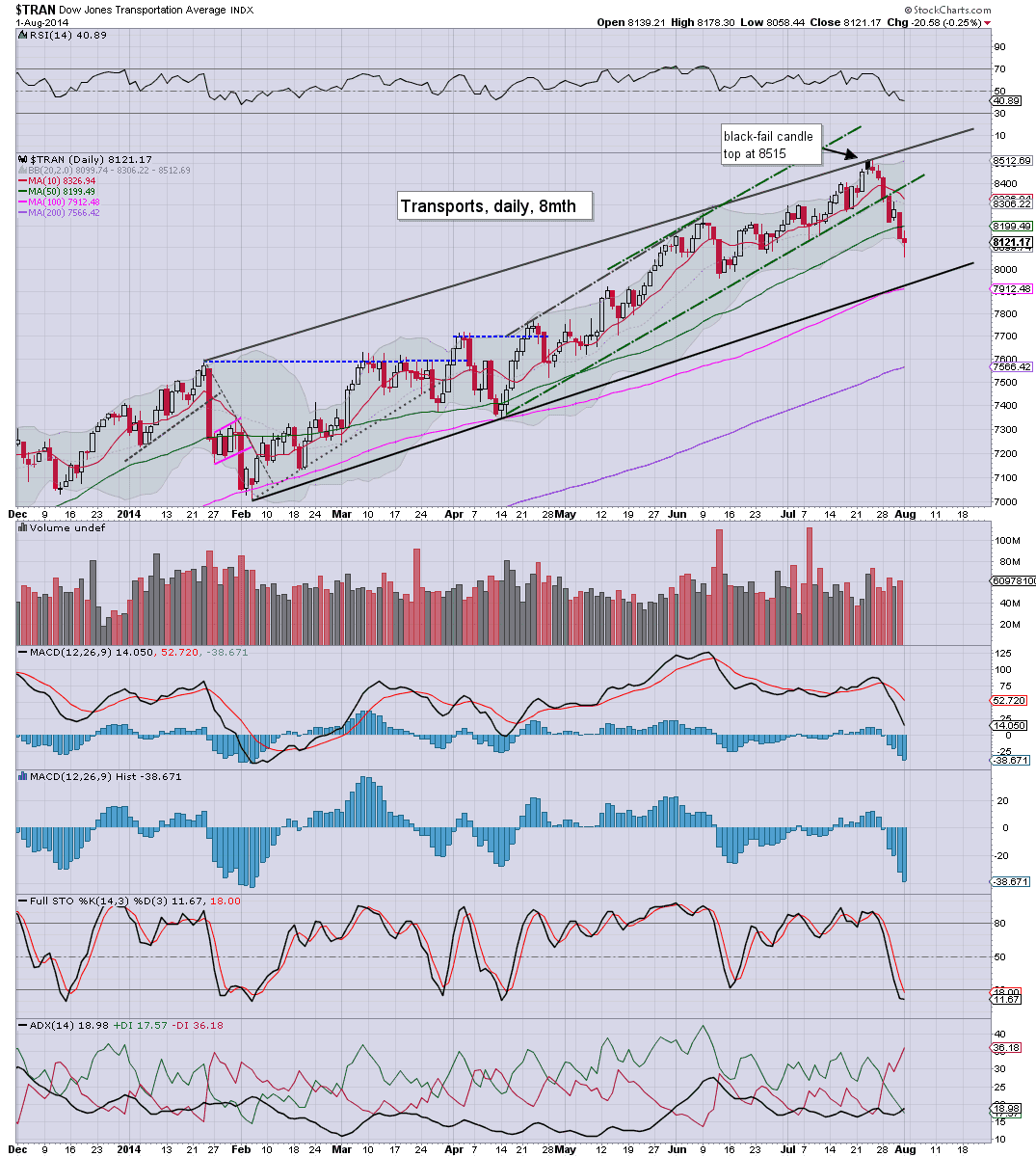 The break on Thursday really has changed almost everything. Not only was the price action of Thursday - with some follow through on Friday, the most bearish since early February, but the bigger weekly/monthly cycles are also starting to turn somewhat ugly.

The Dow is within easy range of its 200dma, whilst the R2K is just 3% from breaking the critical 1080 threshold.