With some of the equity indexes breaking new historic highs, it was no surprise to see the VIX melt lower again, settling -1.2% @ 12.37. Near term outlook is for the VIX to remain in a very tight range of 13/11. VIX 20s do not look viable until late Jan/Feb 2014. 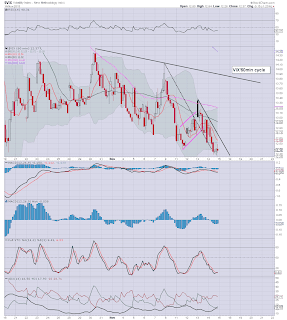 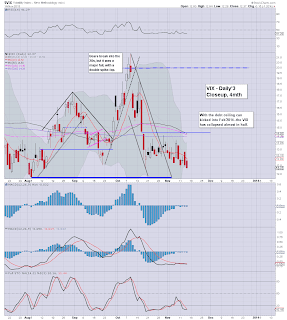 The price action/structure in the VIX is pretty incredible to see. Every little pop is whacked lower by the equity bulls almost every day.

Even the VIX 14s now look out of range in the next week or two, which is a bizarre thought.

Without question, VIX 20s seem near impossible (baring the moon landing in the pacific ocean) for the remainder of this year.

As the recent VIX 'optionmonster' videos (that I highlight at lunch time) have shown, the only interest in VIX is in Feb/March. Virtually none of the pro-traders are looking for volatility to increase for another 8-10 weeks. 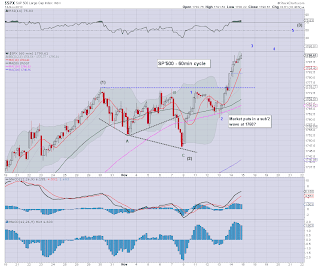 Another day for the bull maniacs.

If the micro-count on the hourly chart (which is based on my weekly8 chart) is correct, then we'll see 1800s...and some kind of very minor down wave in early December.

I realise to many out there, it still seems out of range, but the sp'2000s are very much viable by late spring. That is plenty of time, and allows for a few minor pull backs 2-5% along the way.

For those still shorting the indexes...I can only suggest...go stare at a monthly index chart for the rest of the evening.
--
more later..on the VIX
Posted by Trading Sunset at 21:01:00
Email ThisBlogThis!Share to TwitterShare to FacebookShare to Pinterest 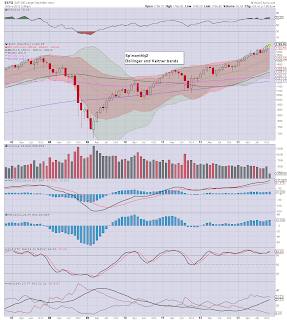 *I'd not noticed until just now, the upper bol' on the monthly, broke into the 1800s today..so despite the daily and weekly cycles being somewhat over-stretched, the monthly charts are in fact offering a brief foray into the 1800s.
-

So..the Yellen is out of the way, and the market can get on with further algo-bot meltup.
-

There remains some rather bizarre talk of an FOMC QE-taper in December, but to me, that is beyond stupid.

There will be no policy changes until Bernanke has sailed off into the sunset..and Yellen settles down into her new chair in the printer room.  At earliest, slight QE cut in Feb/March..but hey...they were saying that this past February.
-


3.54pm.. a close in the 1790s?   Not that it matters. Little reason why tomorrow won't be higher also. Urghh
Posted by Trading Sunset at 19:50:00
Email ThisBlogThis!Share to TwitterShare to FacebookShare to Pinterest

The market looks over-cooked in the upper sp'1780s, churn into the close seems likely. Metals look like an initial rollover is in progress, with Gold +$9, after +$20. Equity bears don't really have any significant hope for a few weeks. 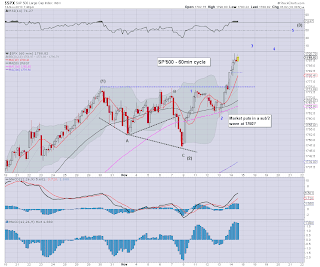 *notable strength in AMZN and TWTR. Neither make any money..so..at least the market is consistent at times. 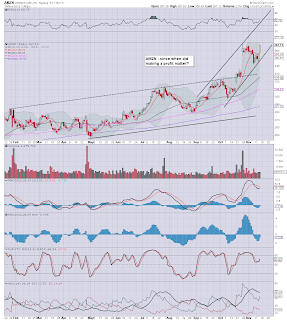 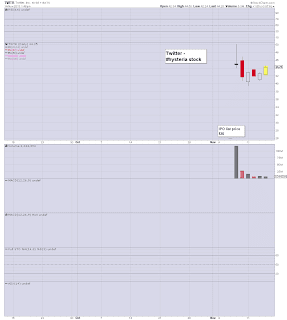 2.33pm..sp'1789..urghh..market making another play to take and hold the 1790s..for the close. A weekly close will be damn hard tomorrow, but hell, why would anyone dare short it?
Posted by Trading Sunset at 18:50:00
Email ThisBlogThis!Share to TwitterShare to FacebookShare to Pinterest

The main indexes remain 'broadly' higher, although there is some weakness in the R2K and the Nasdaq, the latter no doubt affected by CSCO. Metals look vulnerable this afternoon, with Oil now higher by +0.4%. VIX is back in the red...hitting a new low of 12.29. 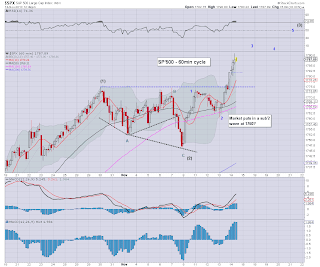 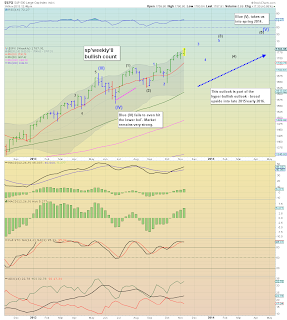 Weekly charts look strong. Clearly we're going to rollover within 'some weeks'... but probably not until Dec.

Zero point in trying to meddle on the index-short side.
Posted by Trading Sunset at 17:53:00
Email ThisBlogThis!Share to TwitterShare to FacebookShare to Pinterest

The market is generally pleased with what the Yellen has said so far today. The mainstream is again realising that QE could continue for some years..rather than months. Metals look toppy, after early gains, Oil is back to flat. 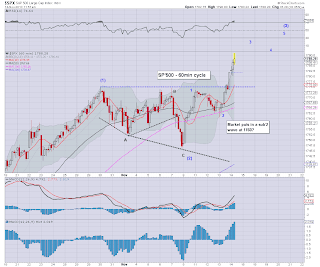 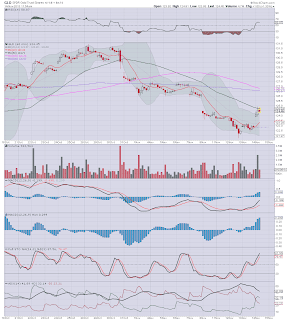 time for tea :)
Posted by Trading Sunset at 16:53:00
Email ThisBlogThis!Share to TwitterShare to FacebookShare to Pinterest

The continuing comments from the Yellen monster are having all sorts of effects on the stock/commodity markets. Equities are trying to claw into the sp'1790s, whilst metals are seeing a choppy..but rather strong bounce, with Gold +$18. Oil remains weak, -0.8% 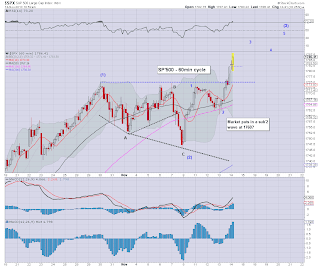 I've really not watched the Yellen monster much before today.

No doubt..the mainstream will try to play this as a 'little old innocent woman'..when this all goes to hell in the coming few years.
- 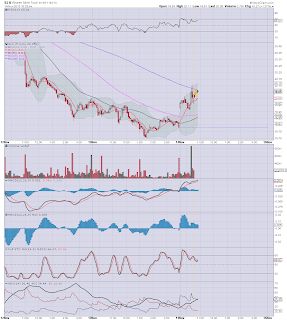 The metals remain twitchy..and reacting to Yellen on Cspan. There remains very strong underlying weakness in Gold and Silver, and despite the opening gains, a red close is certainly viable.


11.28am.. The Dow is putting in some definitive hyper-bullish price action... 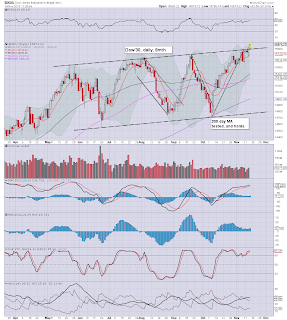 No doubt there...the old trading range is busted..and we're off and running.
Posted by Trading Sunset at 15:54:00
Email ThisBlogThis!Share to TwitterShare to FacebookShare to Pinterest

10am update - awaiting the Yellen monster

The main indexes open with some moderate chop..but as ever, there remains underlying upside pressure. A break into the 1790s is viable today. Metals open higher, but look very vulnerable to renewed downside. Oil is weak, -0.7% 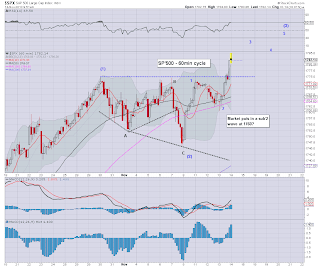 As for the count on my hourly chart..well, its just a vague guess. If its right, then..we'll break into the 1790s by the Friday close.

A break below yesterdays low of 1760 looks very unlikely in the immediate term.
-

Long day ahead..lets see what the Yellen monster has to say....


10.34am. The monster is causing some minor turmoil, metals are pretty twitchy. Market looks a bit tired in the low 1780s..but..the 1790s look viable by the afternoon.

CSCO, -12%....
Posted by Trading Sunset at 14:54:00
Email ThisBlogThis!Share to TwitterShare to FacebookShare to Pinterest

Good morning. Futures are moderately higher, sp +3pts, we're set to open at 1785. Precious metals are higher, Gold +$7, with Silver +1%. Oil is -0.25%, with the slightly higher USD not helping. With QE, equity bulls should manage another day of closing gains. 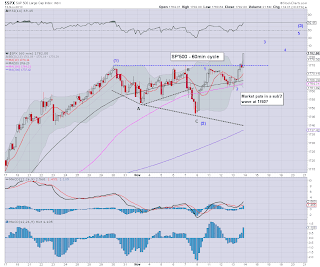 *today will be all about the Yellen monster, no doubt clown finance TV will be giving her blanket coverage for much of the day.
--

Notable early movers: CSCO, -10% on earnings-statement.
Posted by Trading Sunset at 13:04:00
Email ThisBlogThis!Share to TwitterShare to FacebookShare to Pinterest

The Dow - lagging for around six months, is very much continuing to play catchup to the other indexes, and is powering higher. Today's close in the 15800s was a major achievement for the equity bulls, and opens the door to 16k...and then 17k by late spring 2014. 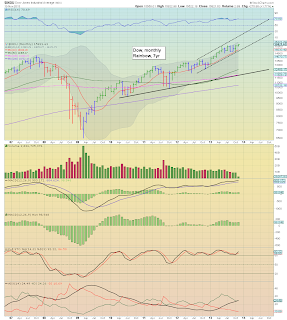 For you regular readers out there, you will know I have been seeking the Dow 15800s for some months, and today we have seen it.

I am indeed now calling for 16k within the remainder of the year..and then 17k by late spring 2014. Frankly, those don't even seem overly bold targets. I realise the mainstream is most certainly not touting that high yet..but then..the mainstream is always lagging the 'reality'.

The transports has managed to comfortably hold the 7000s, and looks set to break into the 7200/7300s into early December. Certainly, 7400/7500 is the 'very best bull case' by year end, although I'm suspicious of a minor down cycle before year end. 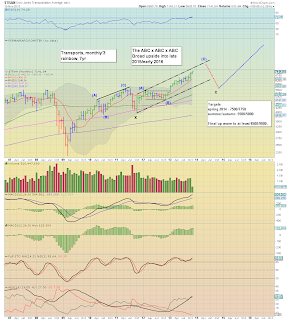 I like the above outlook. Effectively, broad upside into the spring, then a major intermediate wave lower...before a final hyper ramp into 2015/16.

Tomorrow will largely be all about the Yellen monster*, who has her onscreen job interview, in front of some US committee.

*I should clarify, I will suffix Yellen with 'monster', as anyone who has ever supported the policy of negative interest rates - utterly destroying savings (and indirectly..all capital formation)..is an outright macro-economic 'monster'.
-

So the market battles higher, and will probably continue into the late spring.

I sure ain't happy about it, but at least I will still have a trading account when the next intermediate top occurs. In the meantime, the remaining doomer bears should remain in 'survival mode'. In another 4-6 months, there will be even fewer of us left. 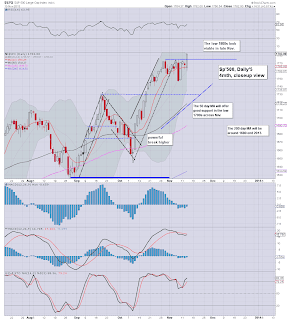 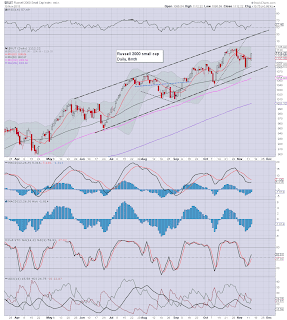 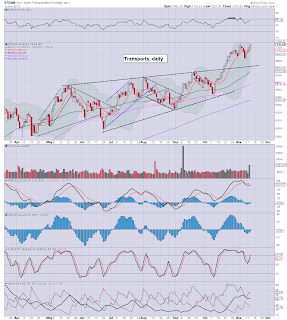 Another typical day for the US market, where there wasn't even any significant QE-pomo.

The indexes are again breaking new historic ground, lead by the Trans, SP..and even the laggy Dow is breaking higher.

There is little else to add...on what was just another classically bullish day.
--