With the indexes all closing higher today - after early morning moderate losses, the bulls are probably feeling pretty confident for next week. I'd actually agree next week will probably have follow through to the upside. A further 2-3% though, that's all they are probably getting. 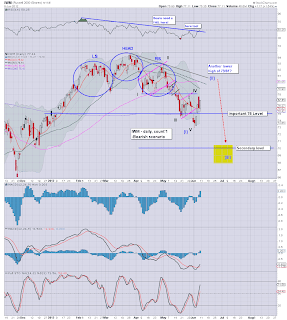 The bears who are looking for a wave'2 to quickly max out - as part of an overall bearish outlook to sp'1100, will want to see IWM not break over 80.00 next week. 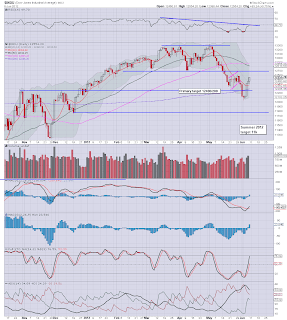 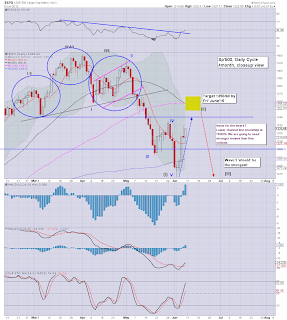 Upper target range remains 1350/60. A move over 1380 would arguably violate the overall bearish outlook. I find it near impossible to envision a realistic scenario where the SP' can break to new highs >1422 at any point this year, never mind the next month or so. 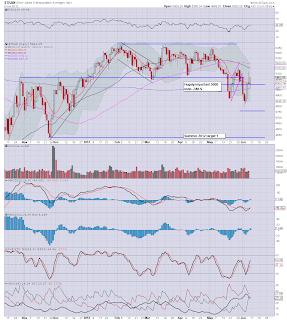 I think the coming week will offer some good opportunities to take on new tactical short positions. The good thing is that the key short-stop levels are very clear, with the only issue being how tight a stop a given trader wishes to use.

*watching Bloomberg TV just earlier, a guest David Kotok (Cumberland Advisers) who was touting sp'2000 by the year 2020. He is looking for the year to close around sp'1450/1500. Good luck with that bold call Mr K.

Its pretty amusing that after just 3 days of ramp, the bulls are out once again proclaiming new hyper ramp targets. Just reflect on the fact that a mere five trading days ago, most of them were on suicide watch after the dow closed -270pts.
--
Overall, sp'1350/60 remains a very valid target for next week, and I hold to that original outlook.
--

Across the weekend, I will probably post an update on the weekly index charts, and I've a new VIX chart to throw out there (see Zerohedge, for article on Citi who were noting VIX'80, if 'disorganised Greek exit').

Good wishes
Posted by Trading Sunset at 23:00:00
Email ThisBlogThis!Share to TwitterShare to FacebookShare to Pinterest

Another week over, the real action begins in just 8 days though, with the Greek elections (round'2) across next weekend. 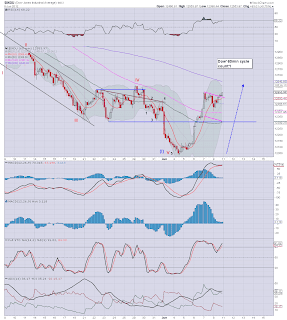 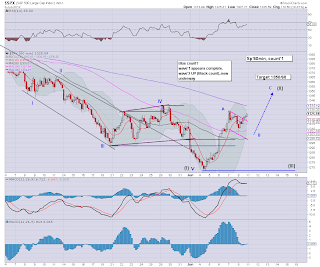 Market closed reasonably strongly, bulls can certainly this week a victory. Remains difficult to know if wave'B has already played out.


A little more later...
Posted by Trading Sunset at 21:03:00
Email ThisBlogThis!Share to TwitterShare to FacebookShare to Pinterest

Market is indeed stronger than I expected. If the B' wave up has already completed, then this will be one of the fastest wave'2 ups I could have imagined.

At this rate we could even be in the 1350s by late Tuesday. All those chartists expecting this wave'2 to drag out until early July or even August? Err...no...more like next week, lol. 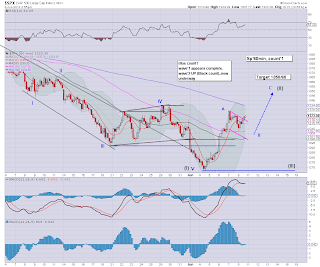 Will the market close at a new cycle high of 1329/30 by the close? Certainly there will be a fair few bear stops at that level, so its slightly viable.

Lets be clear, I'm not sure if this wave'B has played out yet, its too close to call, since a full confirmation of the bull flag will only be if we break into the low 1330s.

I am most definately sitting it out until next week, and will merely wait for a wave'2 peak in the 1350/60s, that will make things much more comfortable for your resident Permabear.

--
A little entertainment for this closing hour, I'm sure some of you have not yet seen this, its worth a look, I'd suggest full screen, and whack up the volume ;)

More after the close...
Posted by Trading Sunset at 19:55:00
Email ThisBlogThis!Share to TwitterShare to FacebookShare to Pinterest

Market is a little confusing right now. Both the dow and sp' broke above what are bull flags, yet IWM (repesenting the rus'2000 small cap index).has not. The VIX is a real mess, it even flashed lower to almost 20 just earlier.

I'm still guessing we fall lower, but right now, 1305/1300 is clearly not viable today, so, that'd mean we should be looking for a brief Monday low instead. 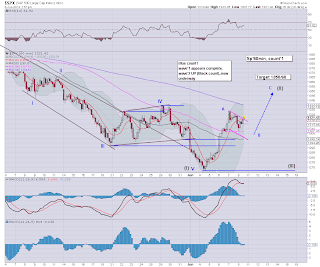 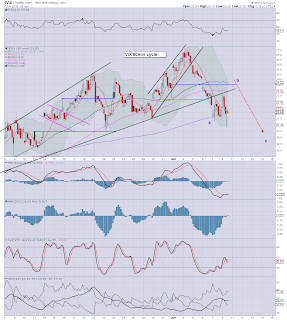 Since the mini ramp, things are a little confusing this afternoon. As noted earlier, I'm not willing to chase this higher, and I certainly won't go short until the latter part of next week in the 1350/60s.

A few notable stocks to note, coal miners: PCX -12%,  ANR -4% - a historic all time low for the latter. Considering the market rally since sp'1267, can you imagine where they will be at sp'1100 ?
--
Posted by Trading Sunset at 18:53:00
Email ThisBlogThis!Share to TwitterShare to FacebookShare to Pinterest

1pm update - at top of the bull flag

Market is at the top of the bull flag on the hourly index cycles. We could certainly start breaking higher from here, but...I just think there is still some way lower yet to come in this B' wave.

So, I'm going to sit back..and wait for lower levels. I certainly won't be chasing this higher if we do break above 1322/25 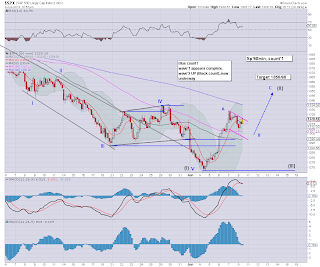 From a MACD cycle perspective, we are possibly close to seeing a floor put in, but as noted, my target  has not yet been met. Better to do nothing, than make a stupid trade ahead of the weekend.


More later....
Posted by Trading Sunset at 17:58:00
Email ThisBlogThis!Share to TwitterShare to FacebookShare to Pinterest

12pm update - its turning into a quiet Friday

Well, those early losses are some hours ago, but so long as we don't break the recent high of 1328, there is still the opportunity for this market to complete a larger wave'B down cycle to around the 1300 level. We might even yet break into the 1290s..briefly, just enough to scare the weaker bulls out. 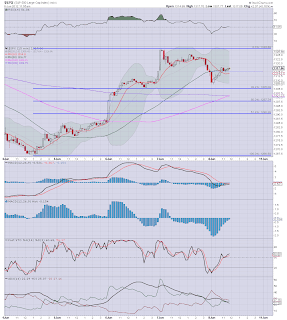 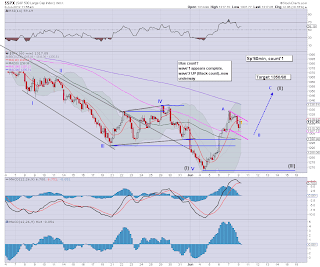 Taking no action so far today, no rush....and if target not met...I'm sitting it out until next week.

I think the Greek team is too indebted to play though, or maybe they just all retired already...to a nice sunny beach.
--

more later..time for lunch!
Posted by Trading Sunset at 16:57:00
Email ThisBlogThis!Share to TwitterShare to FacebookShare to Pinterest

As his highness, Lord Obama speaks on the 'state of the economy', market is seeing a little ramp, with the 15min cycle cruising strongly higher. Its sure starting to look like a baby bear flag to me! 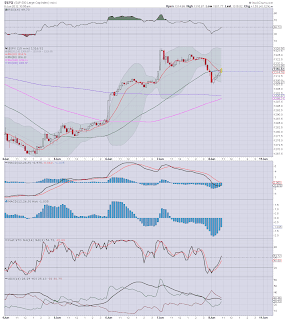 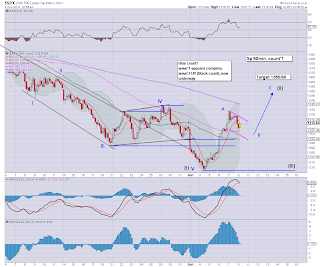 If I can't see an ideal entry, I ain't going to meddle in this market today. So far we've seen an opening drop, then mini ramp...the current level is NOT acceptable for a long entry in my view.

I'm waiting, probably until 1-2pm.
--
Posted by Trading Sunset at 15:57:00
Email ThisBlogThis!Share to TwitterShare to FacebookShare to Pinterest

10am update - push the button?

Market is showing exactly the weakness I was looking for. This should in theory be day'2 of wave'B, if I'm right, then Monday should show some reasonable gains, with 1340s soon enough. The bigger target by the end of next Thursday is 1350/60. 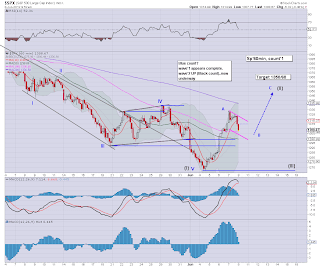 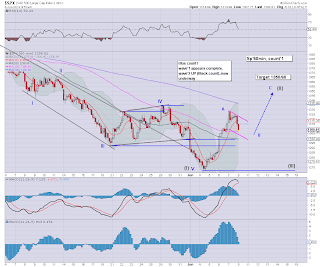 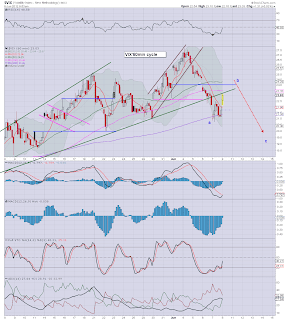 Waiting for the 60min cycles to level out on the MACD cycle, that may take a few hours, so there is not really a hurry. VIX is confirming the move, and it will important to keep an eye on that this morning, VIX looks like it could get to 23.50/24 by lunch time.

Yes, I'm actually planning to go long today, urghhhhhhhhhhh. But...if I can't see a near perfect entry..I'll sit out the C' wave up.

More later
Posted by Trading Sunset at 14:56:00
Email ThisBlogThis!Share to TwitterShare to FacebookShare to Pinterest

Good morning. Futures are showing dow -50pts, with sp-5 or so. Nothing too dramatic, although I'd expect those losses to double at some point this morning. There is only minor econ-data today, intl. trade at 8.30am, and Wholesale Trade at 10am. 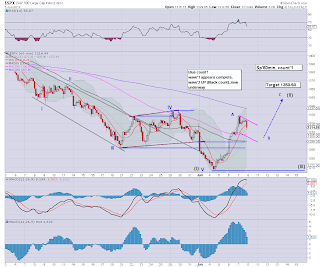 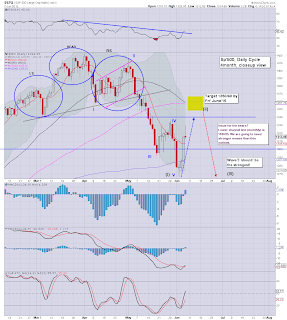 We have a clear bear flag (pink) on all indexes, with a lower target equivalent to sp'1305/1300 sometime today.

So, the idea is that wave'B will complete - having taken two days, with wave'A lasting 3 days.

Wave'C would be expected to last at least 2 days, maybe 3 or 4. That would suggest...this wave'2 will complete no later than Thursday afternoon. Importantly, that means BEFORE the Greek elections and the next big Fed meeting! The timing for a destructive wave'3 down - if I am right, would be perfect.

More across the day. Good wishes for Friday trading !
Posted by Trading Sunset at 13:00:00
Email ThisBlogThis!Share to TwitterShare to FacebookShare to Pinterest

Transports - the old leader is warning of major trouble

Since the sp'1267 low a few days ago, everyone seems to be getting a little hysterical again - not least with the dow rising almost 300pts yesterday. Assuming we move to around dow 12700/800 by the end of next week, I think I can assume marginal mania will be returning to the bulls mindset.

The irony is that we've already seen so many key warnings and support levels broken, the last few days of rally makes no difference to the bigger picture. 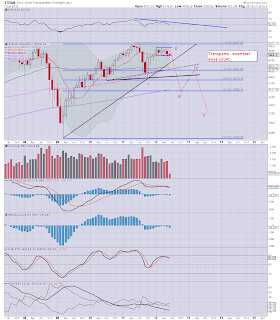 Even if you wish to dismiss the 'doomster' projection as nonsense - and I'm inclined to suggest you do not focus on that aspect of the chart, the key aspect is that the Tranny IS the historic leader, it has always been one of the key indexes to warn of major market declines.

In the scheme of things, the recent May candle doesn't look like much of a decline, and so far even June is only marginally lower. Yet we ARE putting in lower lows, and lower highs. The flat top WAS broken below, the big 5000 level WAS broken. How can people be so bullish about the rest of this year?


Targets for the Transports

-The lower channel line target - which is certainly reasonable to expect, is 4500 or so - that's 10% from current levels, and would imply sp'1225/00 in the coming 3-5 weeks. I suppose that might be where the Bernanke appears to do QE3, in which case lower bearish targets will be cancelled.

So, as I often say...keep your eye on the Transports, the old leader is still worthy of attention.

Goodnight from London.....the weekend is almost here!
Posted by Trading Sunset at 03:00:00
Email ThisBlogThis!Share to TwitterShare to FacebookShare to Pinterest

An interesting day to watch, not least with the Bernanke talking for much of the morning. It was most amusing to see the cheerleaders on both clown channels start to get twitchy with a mere single down candle on the hourly charts in the closing hour. Can't they even cope with the idea of ANY moves lower now? 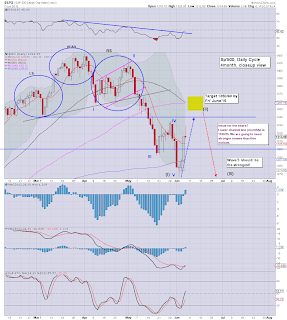 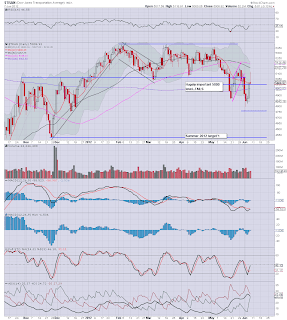 I think things are looking pretty good from a chart perspective. We're seeing a nice wave'2 higher after what is now an increasingly clear 5 waves lower forming main wave'1. So, the issue is how high and how long does it take for this new cycle to max out?

Considering the wider events in the coming weeks, I'm still inclined to look for a fast and furious wave'2 - to complete by the end of next week in the sp'1350/60 zone.

If I'm right..and then wave'3 starts after the weekend of the Greek elections, the tail end of June and early July is going to be one amazing time to be trading this crazy market.