The VIX opened 4% higher, but those gains sure didn't last long, and by late morning the VIX was again 3% lower in the low 16s. Yet, with the indexes weak in late afternoon, the VIX managed to close flat, and remains @ 16.65 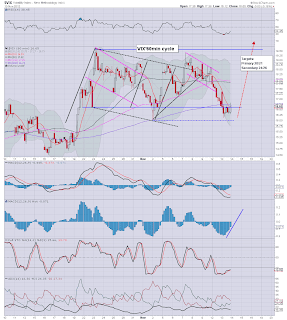 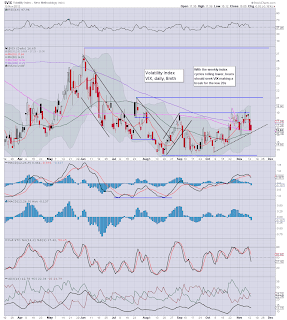 The hourly cycle is now fully reset, and is primed for a major leap higher - possibly a large gap higher at the Wednesday open. A 10% move would get the VIX back into the low 18s, although based on recent VIX action, a 10% move is perhaps expecting too much.

Regardless, I'm still looking for VIX 20/21 - at least briefly, before the indexes floor, somewhere around sp'1345.

A bit of a messy day, moderate opening declines, a mini-ramp, but the afternoon saw underlying weakness emerge again. Indeed, the rats were bailing in the closing hour, which was very pleasing to see. 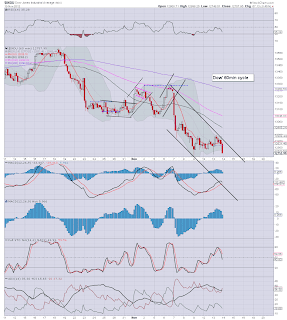 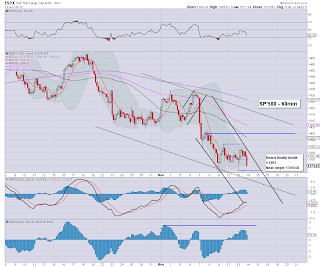 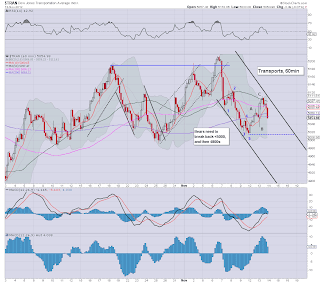 I have attempted to put a count on the transports. It looks pretty good, and if its right, it should mean we are due at least one major wave to the downside. That would certainly offer a good chance of hitting my sp'1345 target either late tomorrow or Thursday.

As ever...the usual bits and pieces across the evening
Posted by Trading Sunset at 21:02:00
Email ThisBlogThis!Share to TwitterShare to FacebookShare to Pinterest

Mr Market is struggling, with just one hour left of the trading day. The VIX is still battling to stablise in the mid 16s. A close <1380 would be useful to the bears, as a bearish lead into tomorrow. 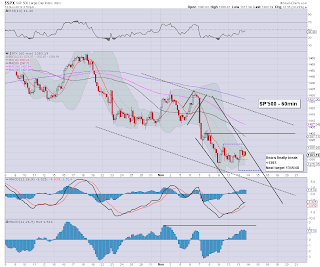 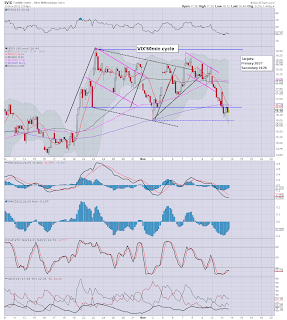 Well, lets see if some of those stinky rats decide to abandon ship, and if we can close the indexes a touch red. A fourth consecutive close under the 200 day MA @ sp'1381 would indeed be...useful.

I remain short, and will hold into tomorrow.

back after the close
--

UPDATE 3.15pm I do like this trans hourly chart, with count.. we should in theory snap much lower tomorrow 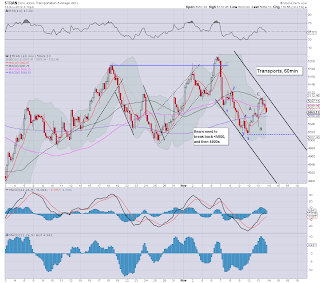 Rats sure are getting twitchy, with 45mins left. SP'1376 or lower, would be a real bonus after the earlier mini-ramp.

Posted by Trading Sunset at 19:56:00
Email ThisBlogThis!Share to TwitterShare to FacebookShare to Pinterest

2pm update - bulls have nothing to threaten bears with

It is almost amusing seeing the bulls try to rally this market back. How many were buying the dip all way down across the past six weeks from the 1470s? The VIX is a touch red, a brief spike into the low 20s still seems viable, especially on a wash-out move. 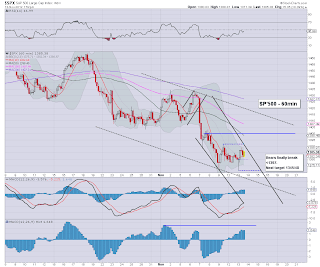 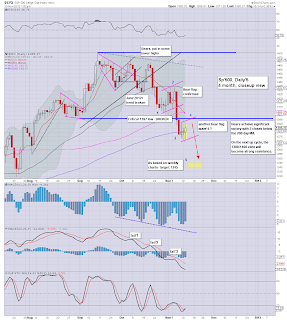 It does look like we have a bear flag on the daily, and a move to my primary target of sp'1345 still looks right on track. I suppose we could remain within the flag for the rest of this week - not least since its opex, and break lower next week.

Regardless, I'm short, and trying to be patient.

--
Dear Bulls....you have nothing to threaten me with 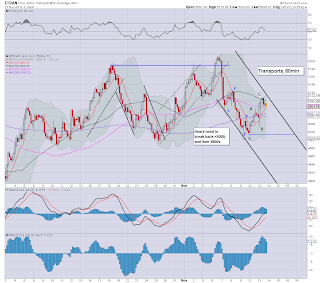 Posted by Trading Sunset at 18:58:00
Email ThisBlogThis!Share to TwitterShare to FacebookShare to Pinterest

An early gap lower, but we've again seen the maniacs come on in, and we're now back in a zone of strong resistance. Its going to be extremely difficult for the bulls to break and hold over sp'1400. 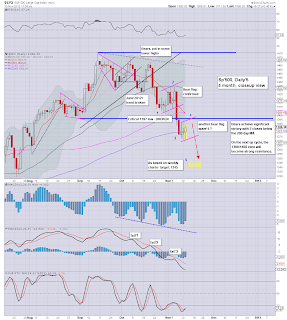 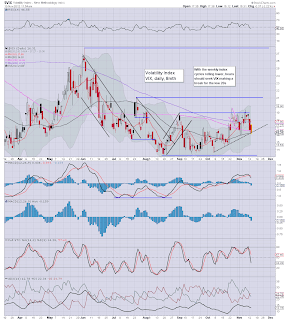 It does look like we have a very likely bear flag - forming wave'4, on the daily chart. If that is the case, then the next major move lower will be it, for this initial down wave from the QE sp'1474 high.

A break <1300 at ANY time in the days ahead, and I will merely chase the market lower, and would consider a crash as viable.
---


*Joe Kernan sure has a way with words..
'I resemble that you said we're like pollyannas'     and    'I'm going to sue you for definition of character'.

UPDATE 1pm,  looking like the VIX has floored..finally. We've 2 spikes, and its trying to break back above 10MA of 16.88 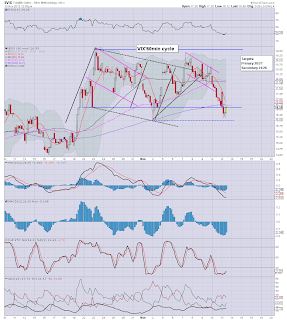 Posted by Trading Sunset at 16:55:00
Email ThisBlogThis!Share to TwitterShare to FacebookShare to Pinterest

11am update - the battle continues

After opening declines, we've seen a mini-ramp, but its weak, I think even the most deluded of bulls out there realises a serious multi-month decline is indeed underway. VIX remains very unreliable, with the $ a touch higher. 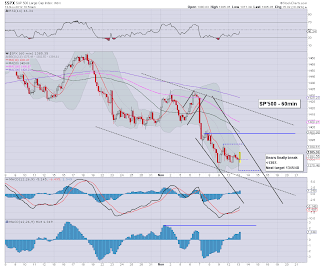 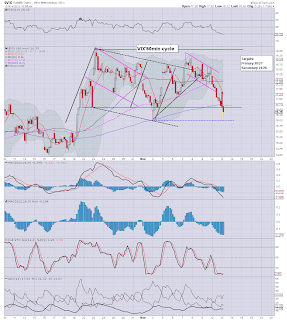 Lets see how much the bear can claw this market lower later today.

I'm content to watch this nonsense play out, I want my next exit at least <1365. As ever..the patient bear..is the good bear.

*I'm looking to see the VIX back > hourly 10MA @ 17.25. A daily close in the 18s would be a strong bearish sign for the indexes into Wednesday.
Posted by Trading Sunset at 15:57:00
Email ThisBlogThis!Share to TwitterShare to FacebookShare to Pinterest

Market has quickly broken to fractional new lows, but we've not yet seen anything in the 1360s. VIX is actually green, but the move is very minor. There seems a lack of power from the bears, and even if we can break to 1365 in the next few hours, we'll surely bounce from there. 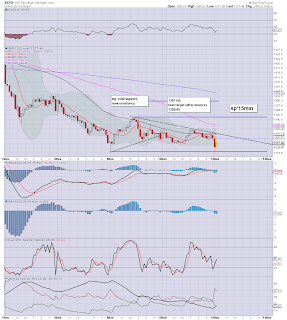 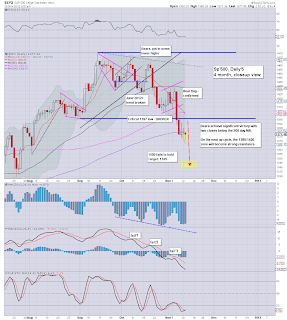 There remains nothing bullish in the daily charts, this is the fourth day under the 200 day MA for the sp'500, bulls have lost all mid-term momentum.

Well, I'm holding short, seeking an exit later today @ 1365..if I can get it, with another re-short late in the afternoon, 7-10pts higher.

If I have to wait until tomorrow,  I can live with that.

VIX is at the floor of what is possibly an INV. H/S formation..any lower, and its arguably busted. 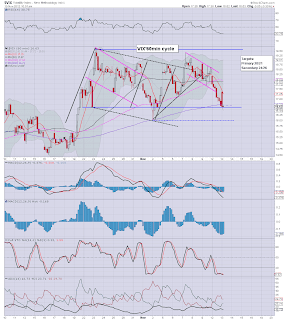 Its a bit of a fierce little battle right now, VIX trying to flip back to green, after breaking 3% lower. $ is a touch higher, hmm.
Posted by Trading Sunset at 14:55:00
Email ThisBlogThis!Share to TwitterShare to FacebookShare to Pinterest

Good morning. Market has been bouncing around a bit, futures has swung back up from sp -12pts to -4. This is somewhat disappointing, but we did at least break a new low. The big issue for today is whether we can get some downside momentum building beyond 11am. That will be difficult as the dip buyers come in around sp'1372/74

Bears need to break <1370 in the opening 30mins, otherwise, we seem likely to make another attempt to challenge resistance @1385/90 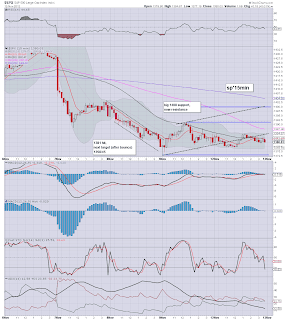 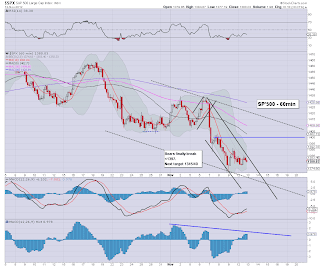 A long and important day ahead. Friday saw a failed bounce, whilst yesterday was semi-shut, so we shouldn't draw any conclusions from the latter.

The VIX remains utterly low, and there is potential for a considerable upward move, but I'm concerned that if the VIX can only rally 8% on a day when the dow was -300pts, it will probably struggle to even be green today..

As things are, with the bounce in the futures, I might exit around 10/11am, and look to re-short in the afternoon again.

It would seem very possible we'll churn between sp'1372-85 for a few days, and that would make a wave'4 bear flag - just like the wave'2 bear flag - which lasted 6 days.

My bigger target of sp'1345 looks very viable tomorrow.
--
Posted by Trading Sunset at 13:17:00
Email ThisBlogThis!Share to TwitterShare to FacebookShare to Pinterest

Whilst the equity market closed flat on what was a semi-holiday trading day, the bigger index cycles continue to display very clear weakness. We are now in the sixth consecutive week lower since the fractionally lower high (sp'1470) on Oct'5. 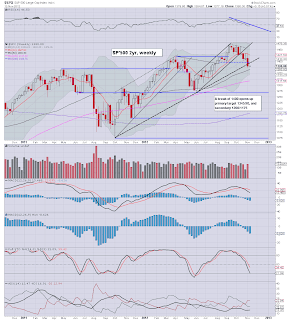 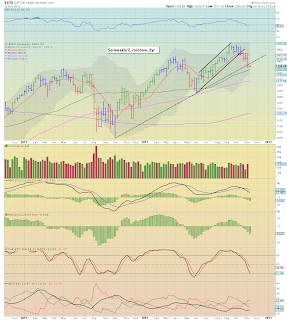 I remain holding to a primary target of sp'1345, as based on the weekly cycles.

Bears need to put in a good capitulation low, then a bounce to around 1400/25 (back test against the broken Oct'2011 rising support) across 2-4 weeks, and then put in the first lower high.

I cannot emphasise enough the importance of putting in a lower high. It is something that is arguably the most critical aspect for all the doomer bears out there.

All those touting 'omg, we're going to crash', well, I can only suggest they go look at a weekly/monthly chart from 2007/08, and see what happened then. The collapse wave only came after a number of lower highs..and lower lows - and that process took around 9 months.

Until we start seeing a series of lower highs, a move much below sp'1200 (which is my best bear case within the next 2-4 months) seems entirely implausible. 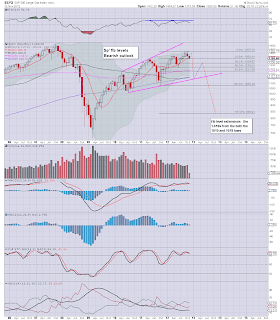 I certainly don't trade on fib' levels, but its kinda interesting. Maybe we'll get stuck in the sp'1230s in this new multi-month decline? I could live with that as a cycle low, before a 2-4 month bounce into mid-2013.

With the bond market running, things should be a lot more active. Considering the hourly index cycles, I do suspect there will be some considerable downside, I'm looking for at least sp'1365, anything in the 1350s would be a real bonus.

There is some key econ-data on Wednesday and Thursday, so there is good potential for some major market moves.

*November 13'th will see a solar eclipse in Australia, for a lucky few, a very special day is ahead.

It was a semi-holiday in market land, and its not surprising the indexes closed effectively flat, on what is possibly the lowest trading volume of the year. 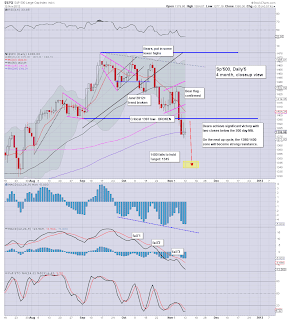 There is very little to add, other than the issue that the broader trends remain downward. The hourly index cycles are now primed for a major wave lower, and we could easily be trading in the sp'1360s tomorrow.

I hold short, and am seeking an exit in those 1360s, but my primary exit target for this bigger cycle remains sp'1345.