It was a broadly bullish month for world equity markets, with net monthly changes ranging from +11.2% (Brazil), +6.8% (Germany), +2.8% (USA - Dow), to -0.3% (Russia). With the US market leading the way higher, along with further central bank 'easy money' policy, the mid term outlook is bullish. 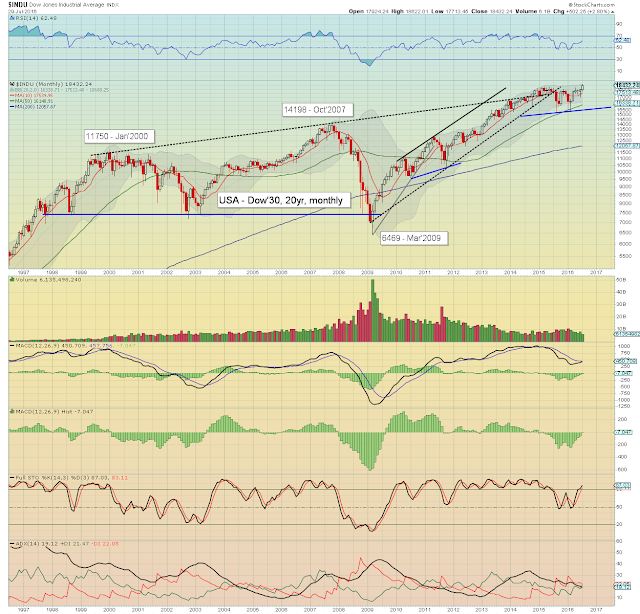 Underlying MACD (green bar histogram) ticked higher for a sixth month, and is set for a bullish cross at the Aug'1st open. This will be the first positive cycle since Feb'2015. 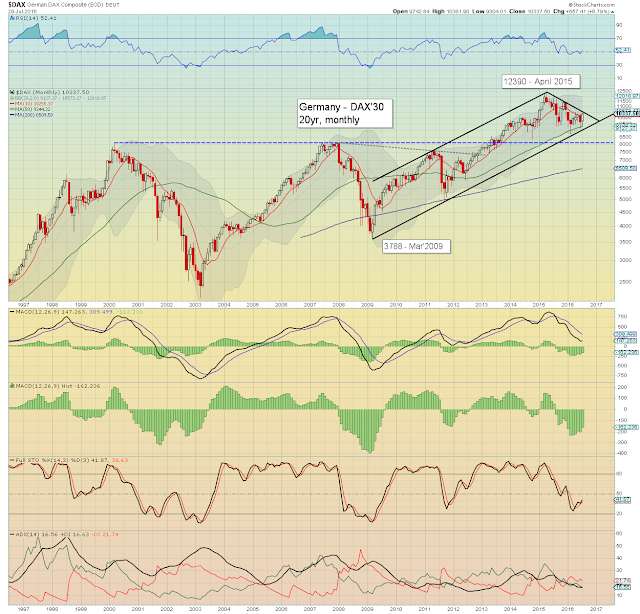 The economic powerhouse of the EU - Germany, saw a powerful July gain of 6.8%, settling at 10337. Declining trend/resistance is around 10500. Any price action in the 10600s should confirm a push toward 12k by year end, with the April 2015 high of 12390 viable in early 2017. It is notable that for the moment, underlying price momentum remains strongly negative, and a bullish MACD cross is out of range until at least September. 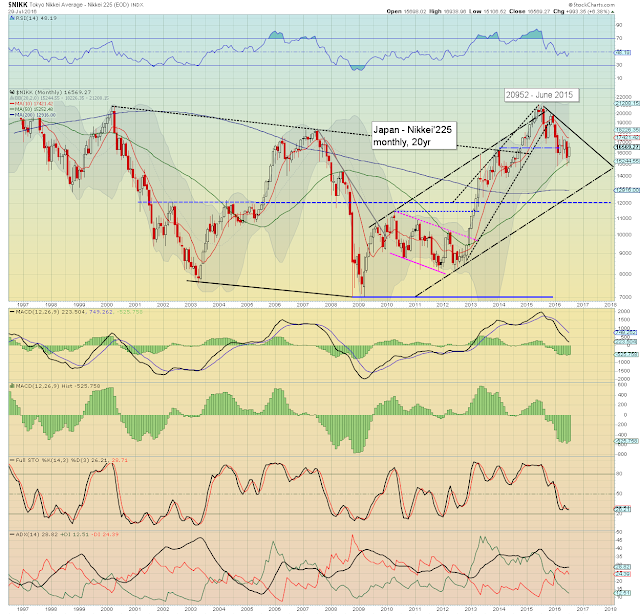 The BoJ fuelled Japanese Nikkei rebounded by 6.4%, settling at 16569. Mid term trend remains bearish, but will turn provisionally bullish on any move >17500, and decisively bullish with the 18000s. A year end close >20k looks a stretch, even if the BoJ spool up the printers some more into the autumn. 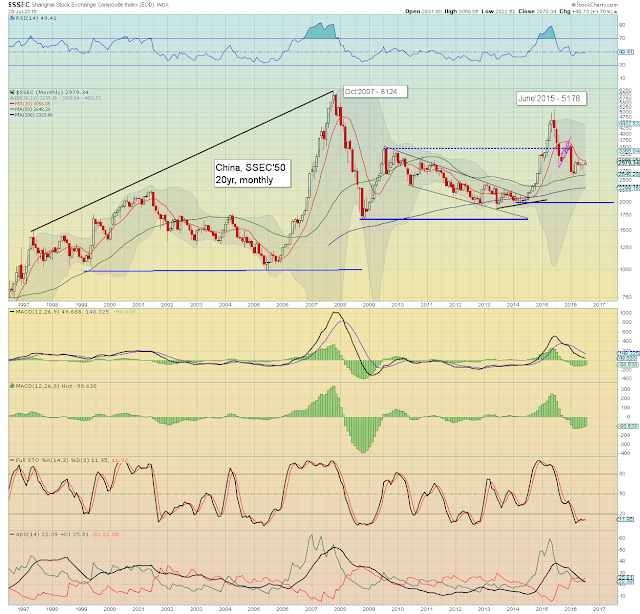 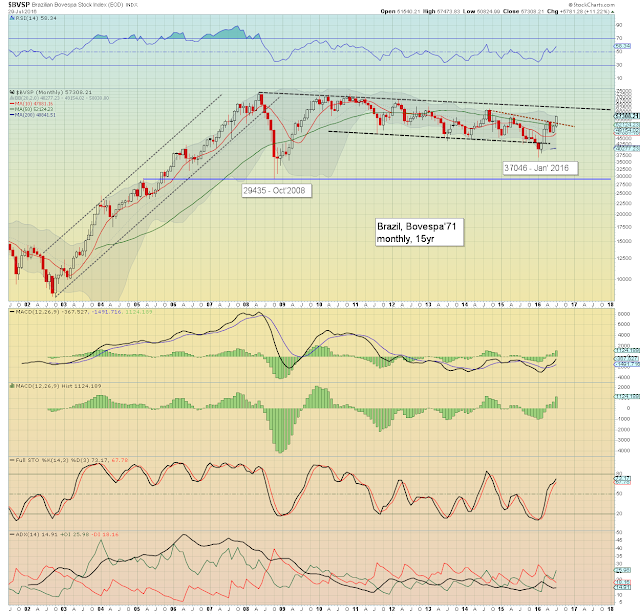 The Brazilian market climbed for a second month, +11.2% @ 57308 - the highest level since May 2015. Declining trend/resistance has been clearly broken and held above. Next upside is the 60K threshold, and then upper declining trend around 62/63k.

Brazil remains a highly problematic nation, remaining in deep recession, and seeing serious geo-political turmoil. The eyes of the world will centre on Brazil next week, as the Olympics are due to begin. Even if the event proceeds without any significant problems, once its over, the Brazilian populace will have to again face the reality of economic and political upset. 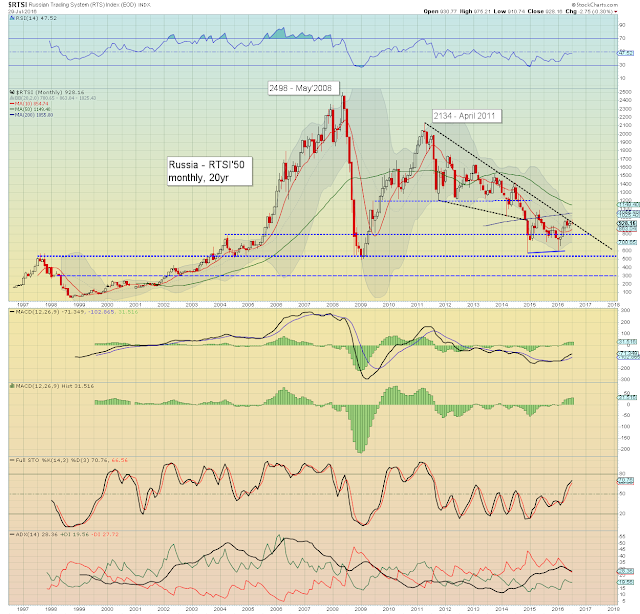 The Russian market saw a third month of relative chop, net lower for July by -0.3% @ 928. The psy' level of 1K remains powerful resistance. With energy prices under renewed downward pressure across July, it was no surprise to see the RTSI lean on the weaker side. 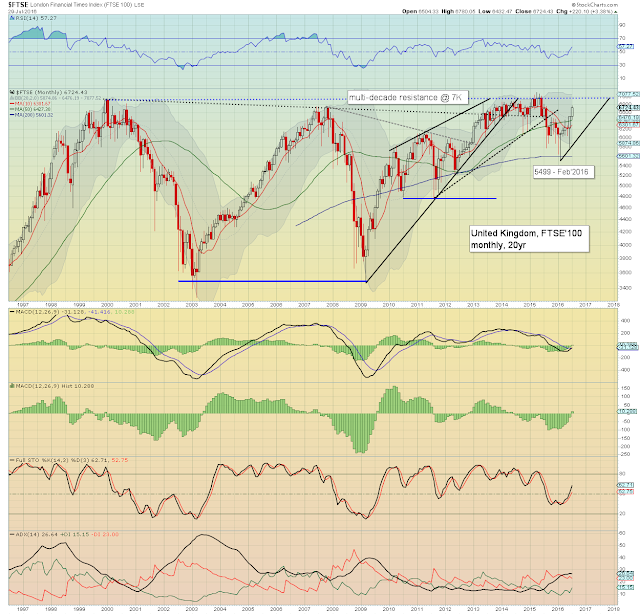 The UK market saw significant bullish follow through from the hyper-reversal in June, settling +3.4% at 6724. Multi-decade resistance remains at the 7K threshold. Any monthly close >7K would bode for far higher levels into spring 2017.

Despite disappointing the market in July, the BoE still look set to cut rates by 25bps to 0.25% in August, and equally likely to spool up the printers again. Carney - and many in UK govt' remain concerned that the economy is highly vulnerable after the decision to exit the EU. 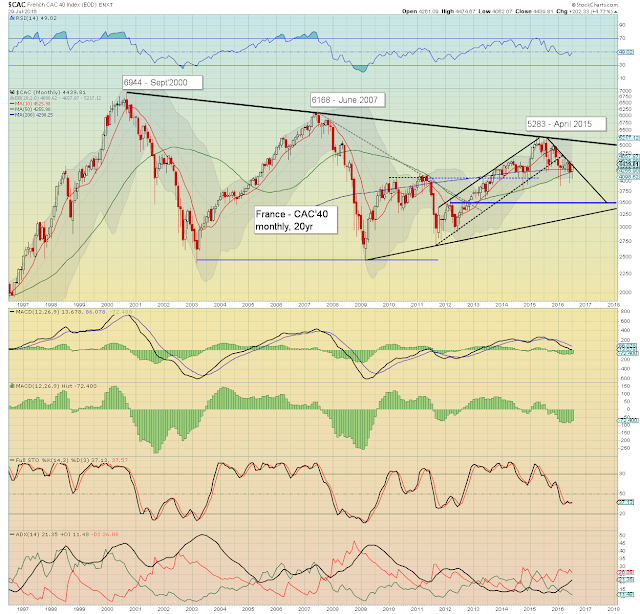 The French market managed an impressive net monthly gain of 4.8%, settling at 4439... around declining trend/resistance. Any price action in the 4500s in August should confirm a move to 5K into the autumn. It is highly notable there is VERY powerful declining trend/resistance, that stretches all the way back to Sept'2000. As of late Dec'2016, that will be around 5100. 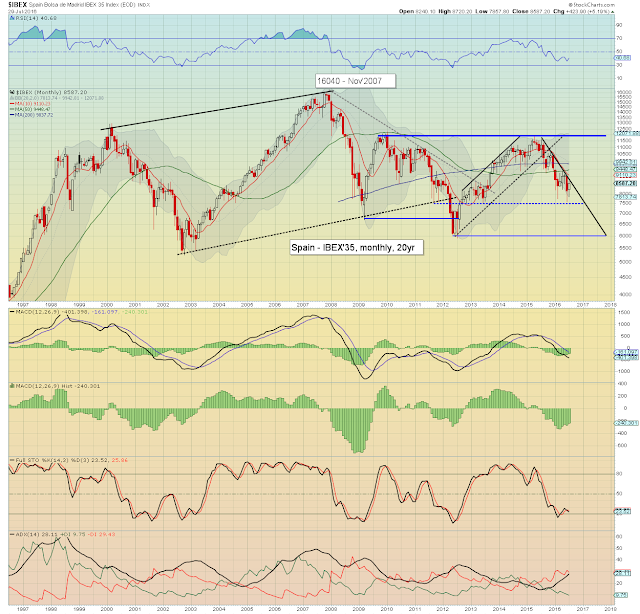 The ugliest of the EU PIIGS - Spain, saw a net monthly gain of 5.2%, settling at 8587.. still holding beneath declining trend/resistance. The key 10MA will be around 9K in Aug/Sept. Any price action >9K would bode for yet another attempt to clear massive resistance of 12K by late spring 2017. A monthly close >12K would offer a viable challenge to test the Nov'2007 high of 16040, and right now, that is a massive 87% higher! 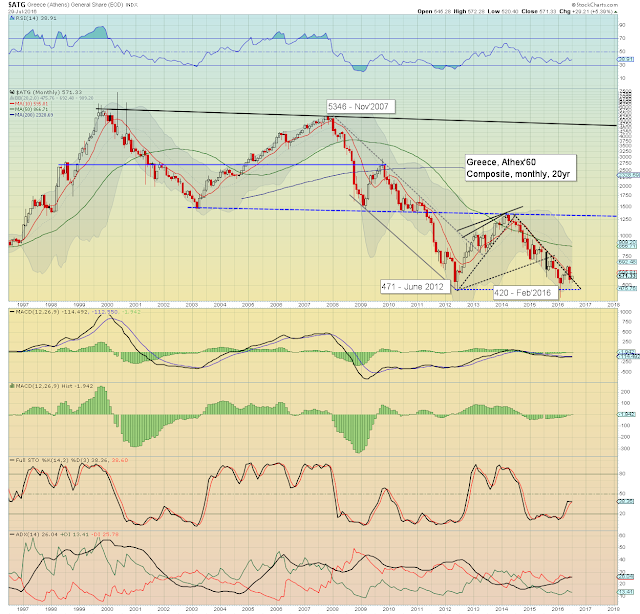 The economic/societal basket case that is Greece, saw a net July gain of 5.4%, settling at 571. Next upside target are the 650s, with 850/900 viable in early 2017. A break >1300 is extremely difficult, as underlying issues remain entirely unresolved. It should remain clear that the Greek economy will eventually have to break from the Euro currency, and revert to the Drachma. That in itself would be extremely traumatic to the Greek market, although once the dust settles... capital would then start to flood in.

The US market is leading the way higher, having broken new historic highs in the Dow and sp'500.

Most markets remain holding within broad downward trends from 2015, although many are close to breaking key aspects of upside resistance - such as Germany, China, and France.

The Jan/Feb' lows are increasingly cemented as key multi-year lows, with broader upside due into spring 2017, and possibly extending into 2018.

Equity bears have nothing to tout unless the June lows are broken under, such as Dow 17063.
--

There are further earnings due, but broadly, the market will be more focused on the latest monthly jobs data.

If you have valued my posts across the past four years, subscribe to me, which will give you access to my continuing intraday posts.

Another month for the equity bulls 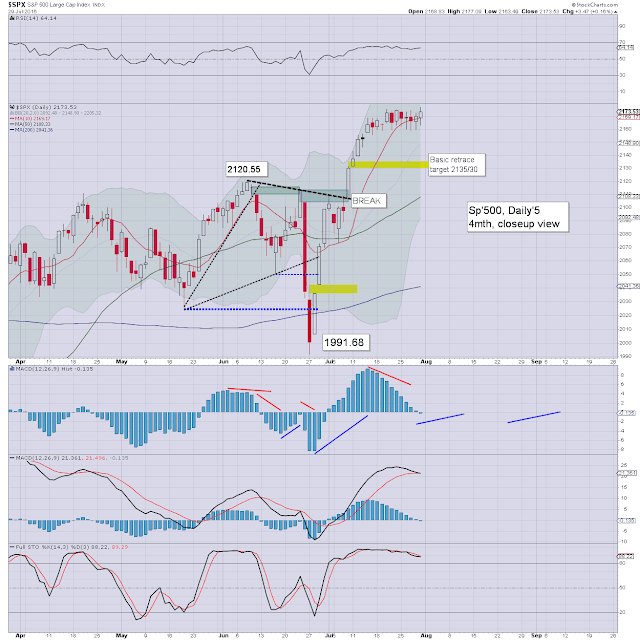 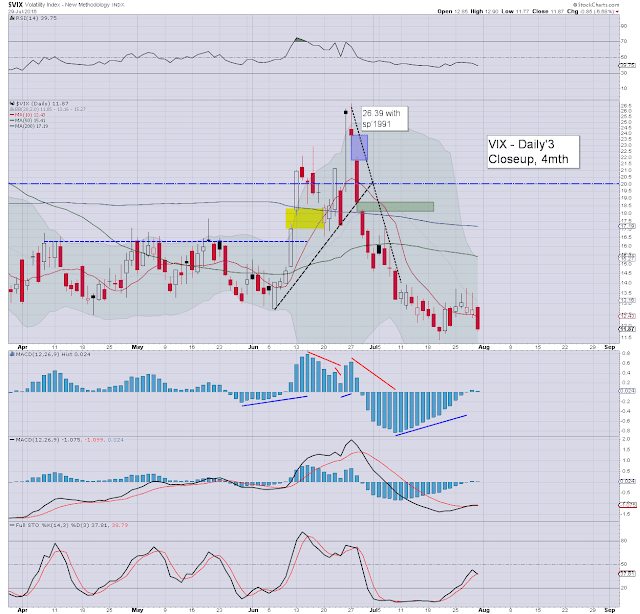 So... the equity bulls even managed a fractional new historic high in the sp' to finish off the month. The US market is unquestionably bullish.. and the outlook is indeed positive for August, and past the Labour day holiday of Sept 5th.

VIX is naturally very subdued, regularly unable to even hold the low teens. With 'Jackson hole' in late August, the VIX will probably get stuck in the mid teens. The key 20 threshold looks out of range until late September.
--


A fifth month for the equity bulls... 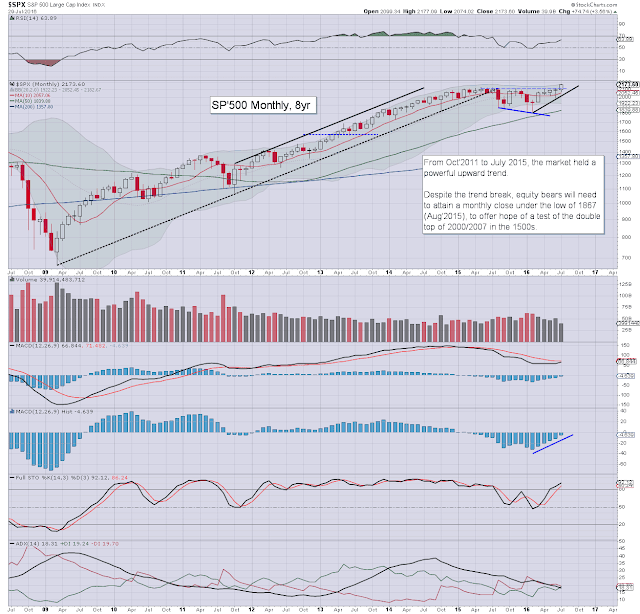