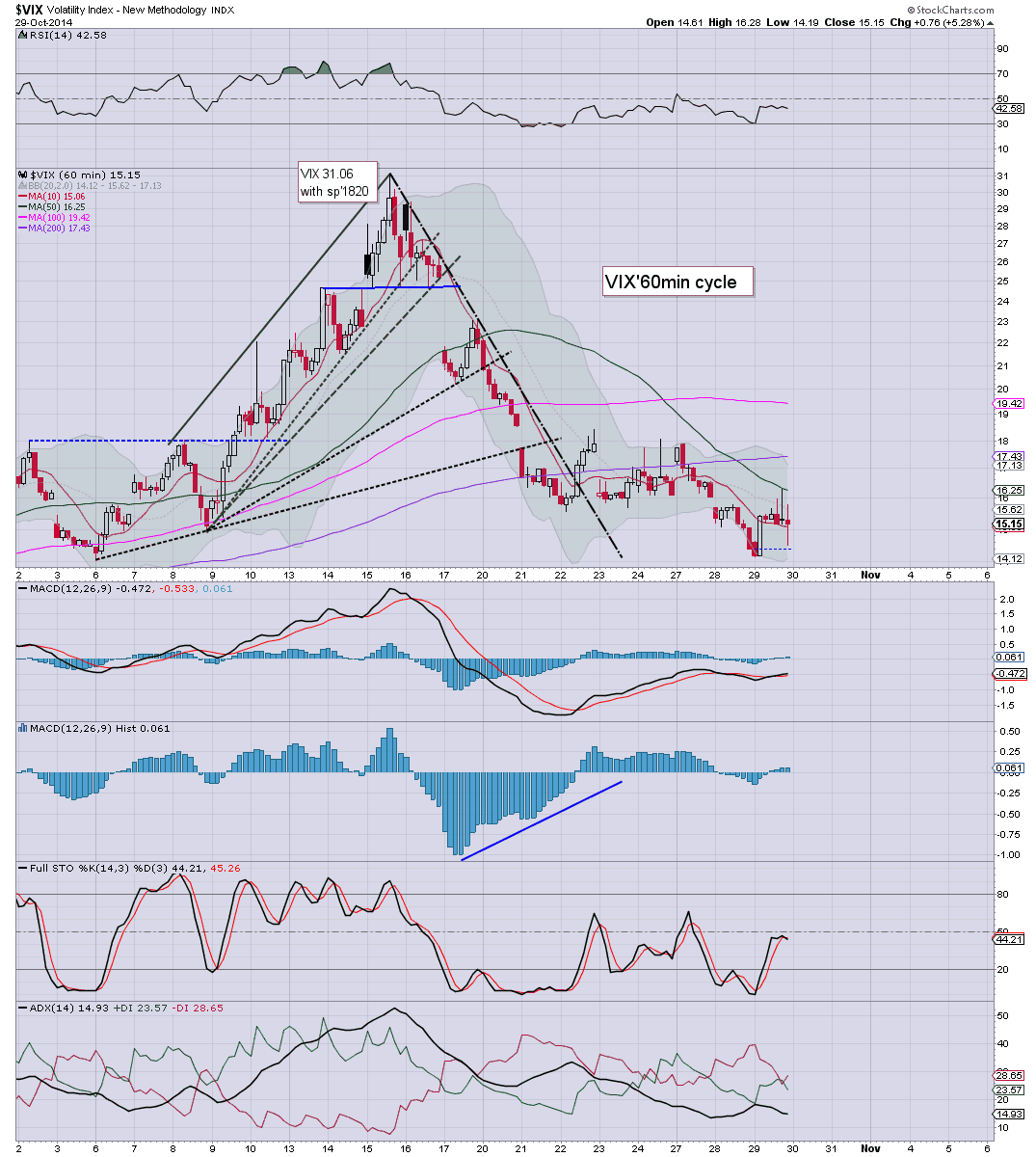 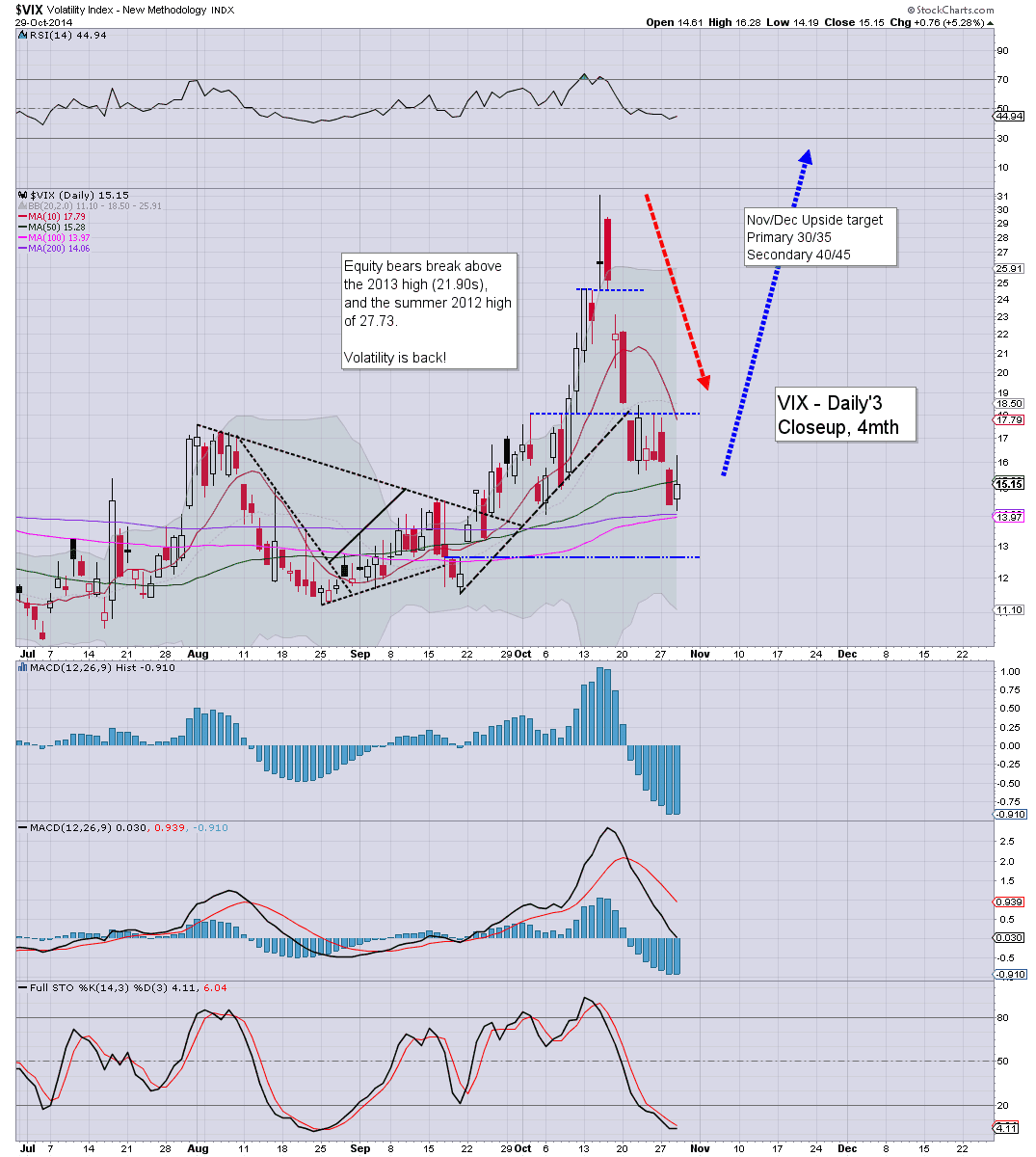 VIX 20s look a rather simple upside target within the next 4-10 trading days.

more later... on the indexes
Posted by Trading Sunset at 22:00:00
Email ThisBlogThis!Share to TwitterShare to FacebookShare to Pinterest 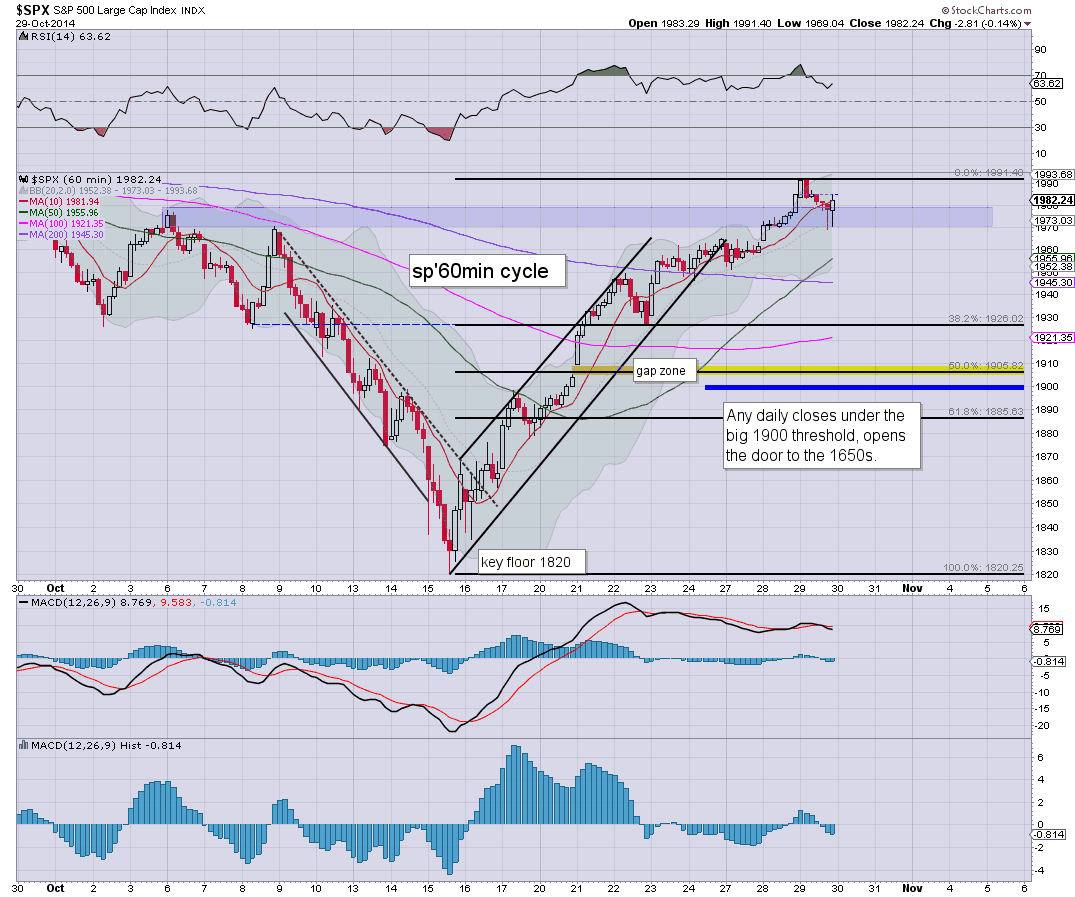 .. and thus concludes a rather important Fed day.

QE3 is terminated.. and for the first time in over two years, the market will have to 'go it alone'.
--

*with the smaller 5/15min equity cycles on the low side, I decided to sit out this afternoon.

I will look to go short tomorrow morning, somewhere in the 1990 area.. which might be a fine micro double top.
--

*I will post on GDX, and the precious metals on my other pages.. later this evening.
--

more later... on the VIX
Posted by Trading Sunset at 20:01:00
Email ThisBlogThis!Share to TwitterShare to FacebookShare to Pinterest

US equities have seen some moderate weakness, along with a VIX that spiked +11% into the low 16s. The smaller 5/15min index cycles though, are warning of a very viable wave higher to re-test this mornings high of 1991.... early tomorrow. 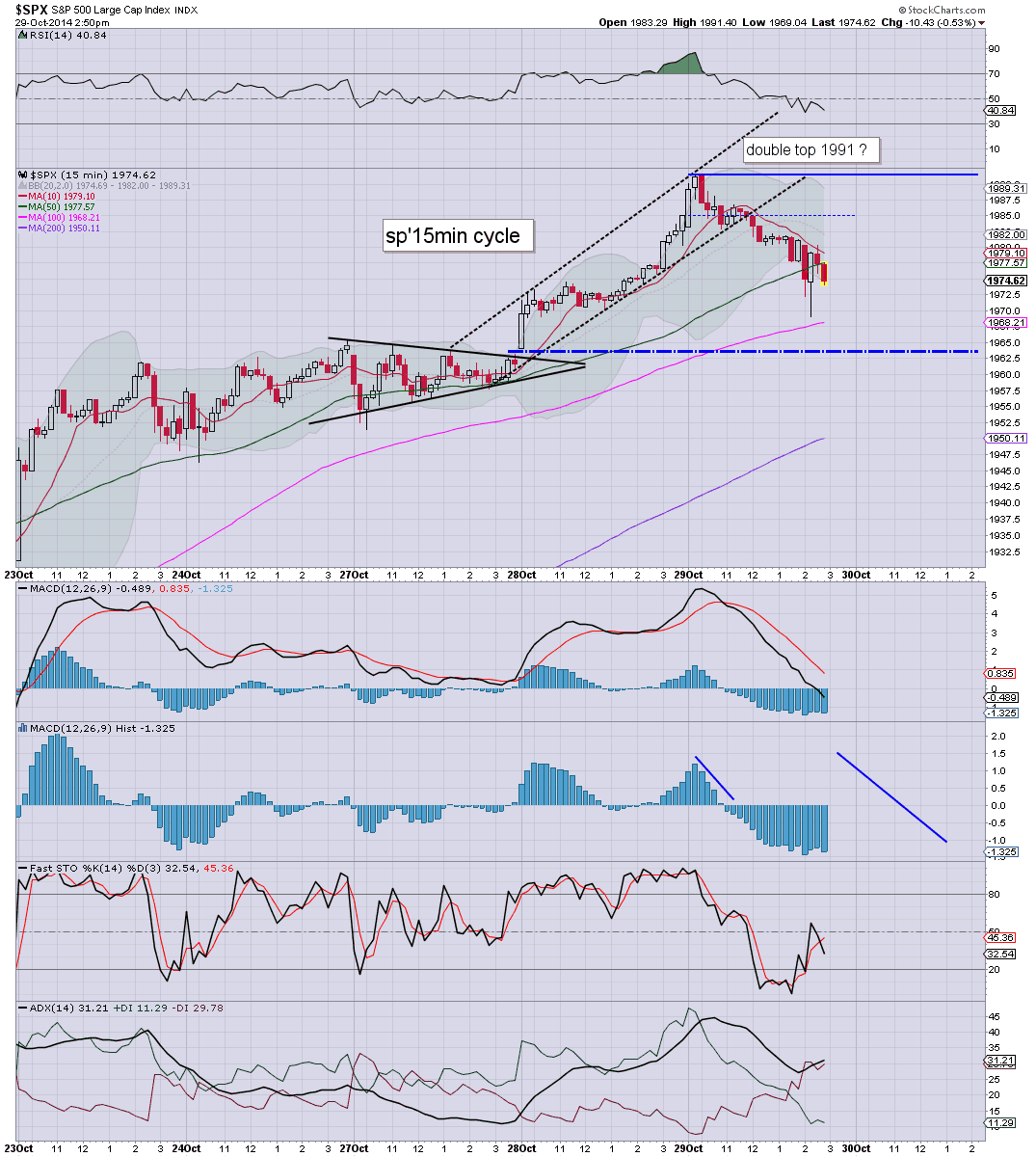 Best guess.. a micro double top of sp'1990/91.. early tomorrow... which will make for a great short entry.. since there should be a lot of divergences all over the place.

With the Fed out of the way.. and QE concluded... the bears have a very good setup.
-- 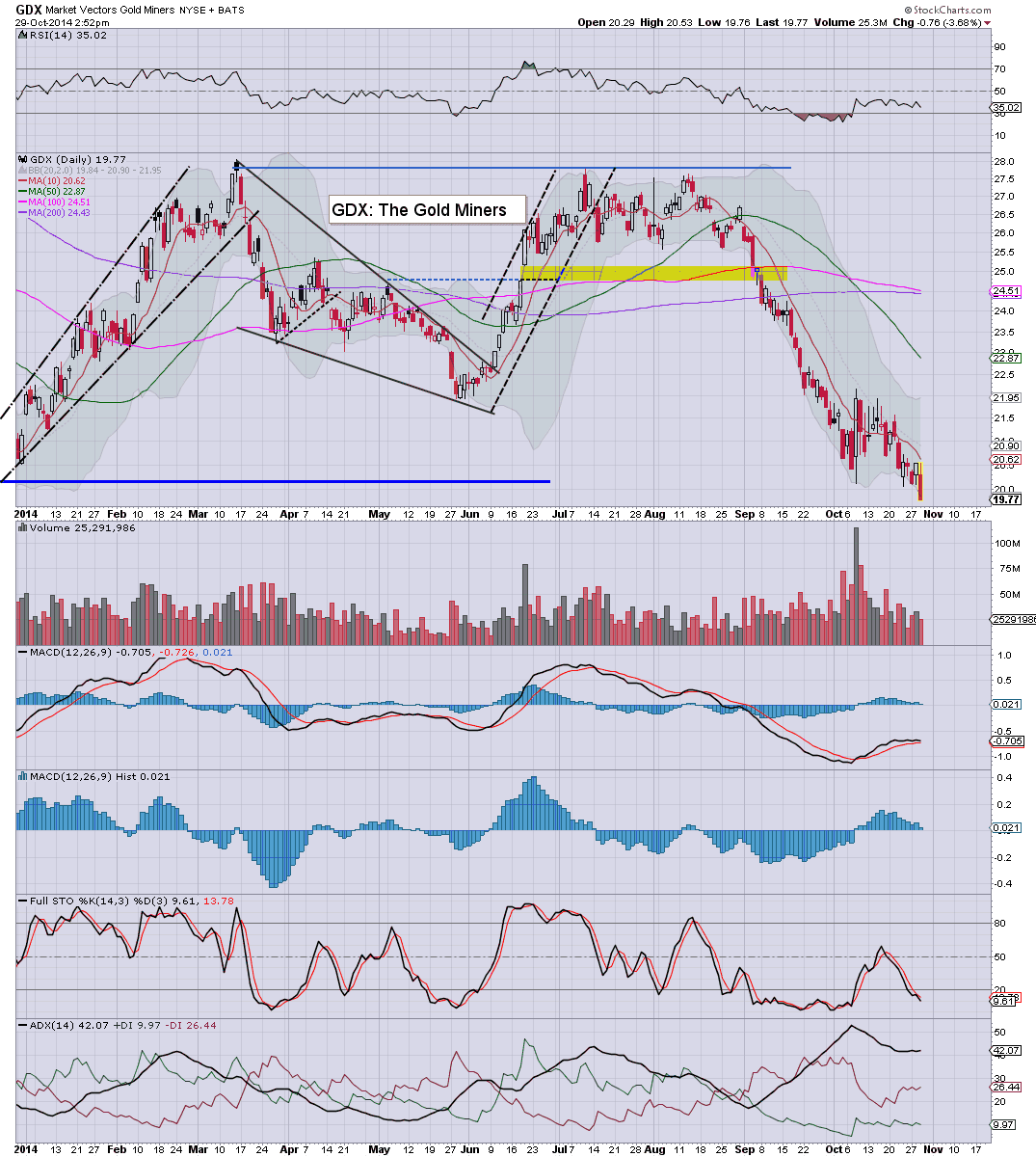 Equities still look VERY vulnerable to another up wave to 1990 tomorrow morning. especially if Mr Market decides the GDP data is acceptable.

Overall.. today is good... QE is over... and now its a case of finding a reasonably entry.. and shorting down to 1920s. Whether we can break <1900.. .that will remain the ultimate question into early November.

Double micro-top of 1990... early tomorrow... then I'm shorting this market... with some high confidence.

.. back at the close.
Posted by Trading Sunset at 18:51:00
Email ThisBlogThis!Share to TwitterShare to FacebookShare to Pinterest

US equities remain seeing minor weak chop. There remains a high probability of some kind of post 2pm bounce... at least to test the morning high of sp'1991. Regardless, having ramped 161pts across two weeks... this market is due a retrace. 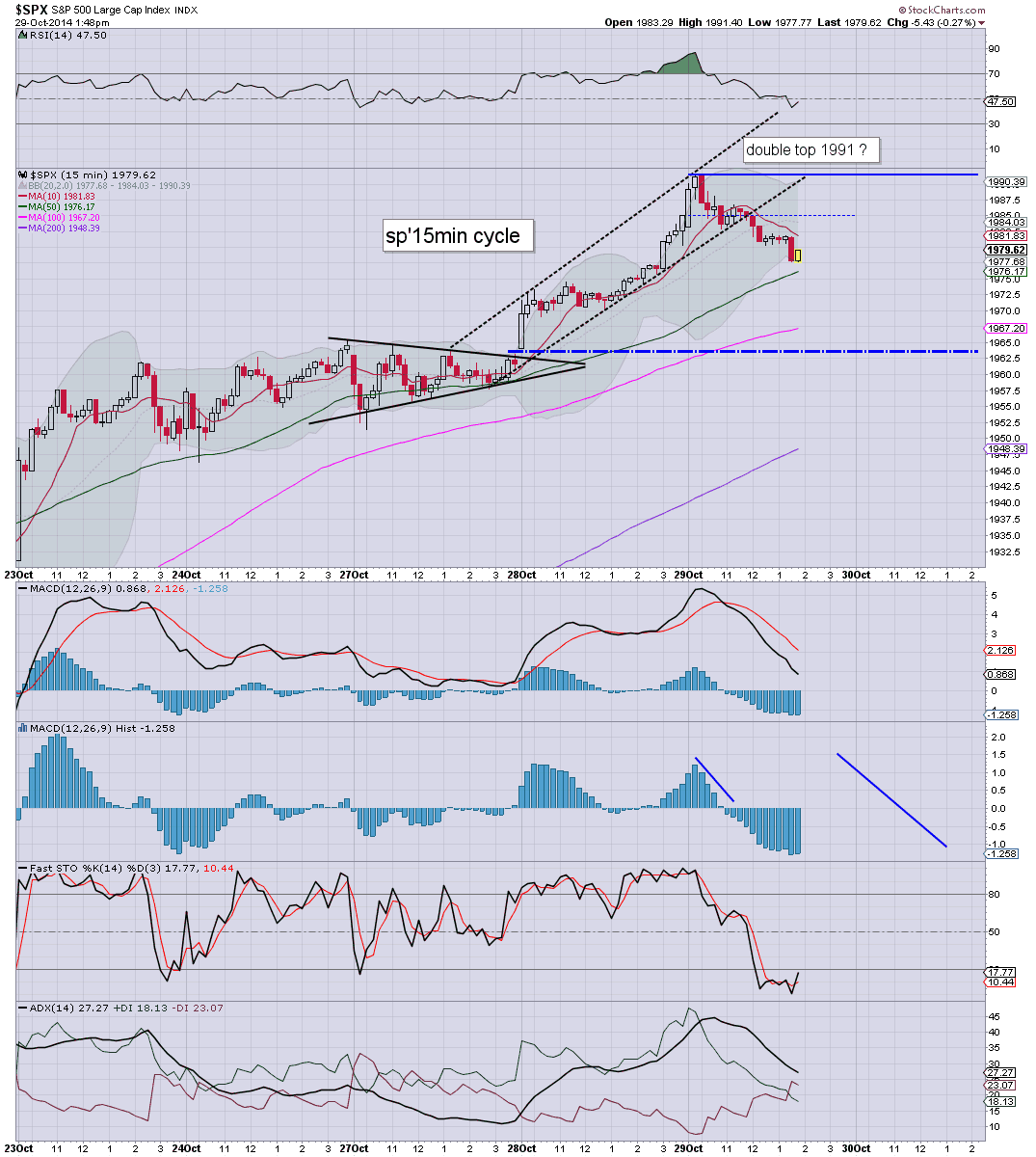 I have little interest in chasing any initial drop on the FOMC.

It will only be on a break of sp'1900 that the bigger picture is re-confirmed.


Updates across remainder of the day...

Eyes on the VIX... which is rapidly cooling back lower....

I ain't chasing this lower...


2.08pm... Equities still sliding, there is an obvious gap around 1962 or so... that is viable.. but frankly.. I've seen this situation before.. and it doesn't usually work out for the bears by the close.

Regardless... QE is indeed over... at least for some months.... Mr Market has to go it alone... into early next year.

Overall.. interesting weakness, but from a pure cyclical perspective.. we're due another up wave.

With the Fed out of the way.. I'll merely look to short the next minor up cycle... more likely early tomorrow. 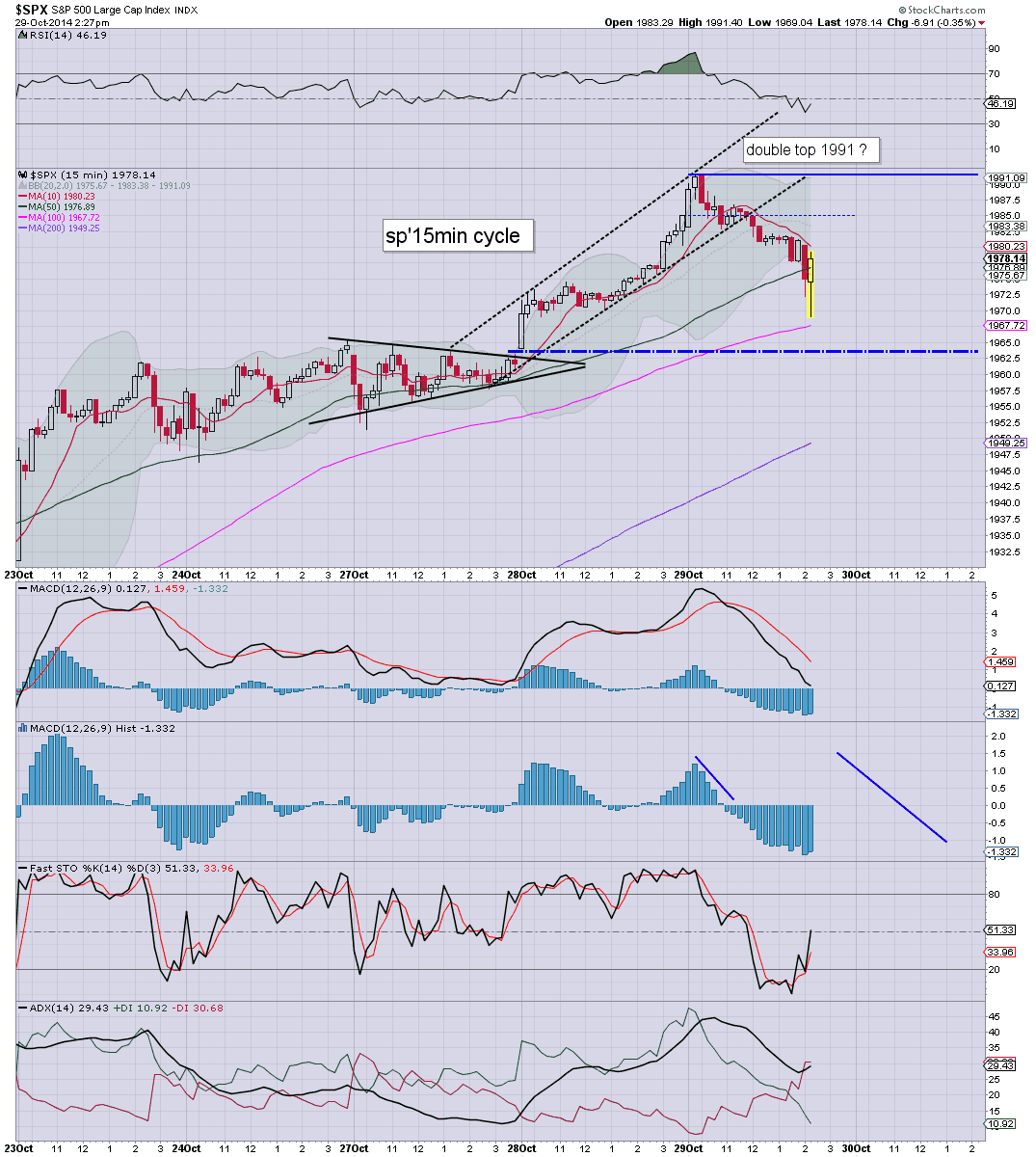 For me.. that will be a very reasonable short level... considering everything.

US equities remain in minor chop mode. The VIX is notably higher, +8% in the 15.50s. Metals look extremely vulnerable this afternoon, Gold -$5. Energy prices are holding strong gains, Nat' gas +2.5%, whilst Oil is +1.6% 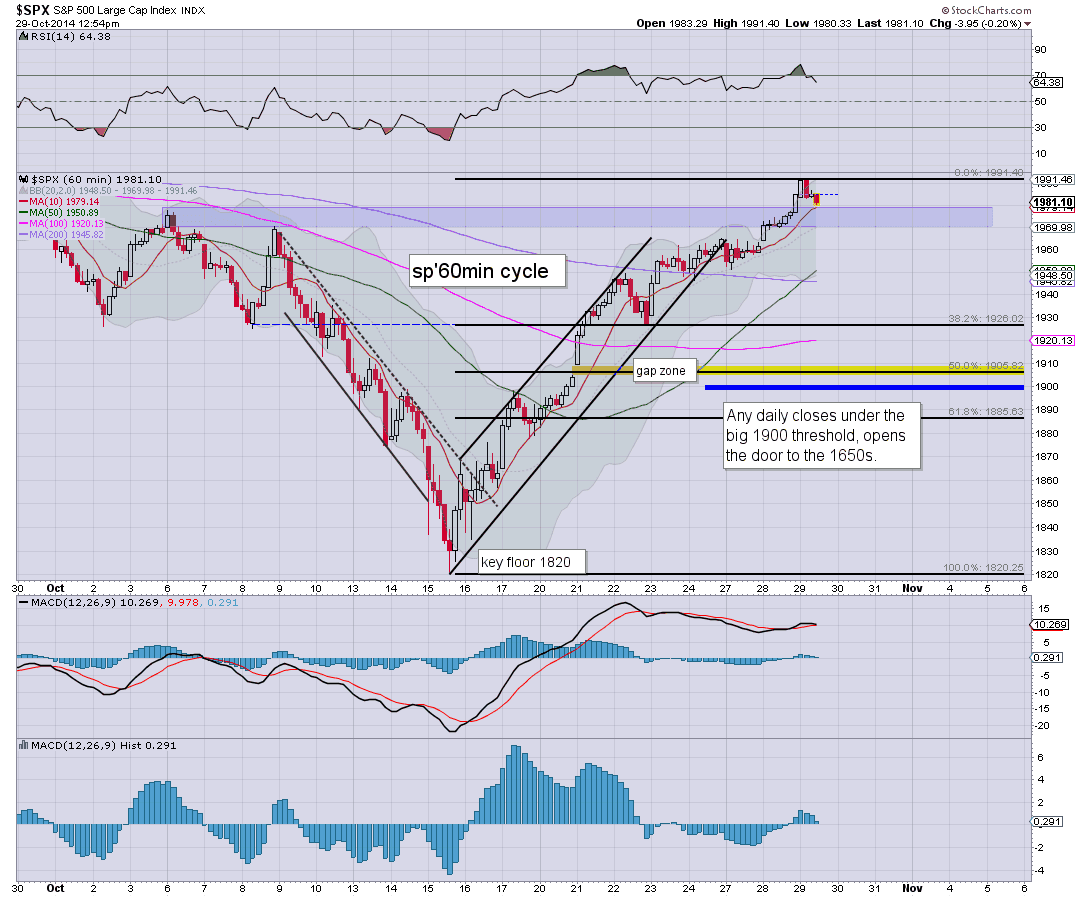 It will only be with a daily close <1900.. that a 'crash' call would become valid. Until then.... equity bears should be highly cautious.
--

... back just before 2pm.
Posted by Trading Sunset at 16:56:00
Email ThisBlogThis!Share to TwitterShare to FacebookShare to Pinterest

Mr Market is in a holding pattern of minor chop.. ahead of the Fed. Interestingly, the smaller 5/15min cycles are resetting, offering a minor spike higher on the announcement. Trans is looking toppy.. having broken another new historic high this morning. 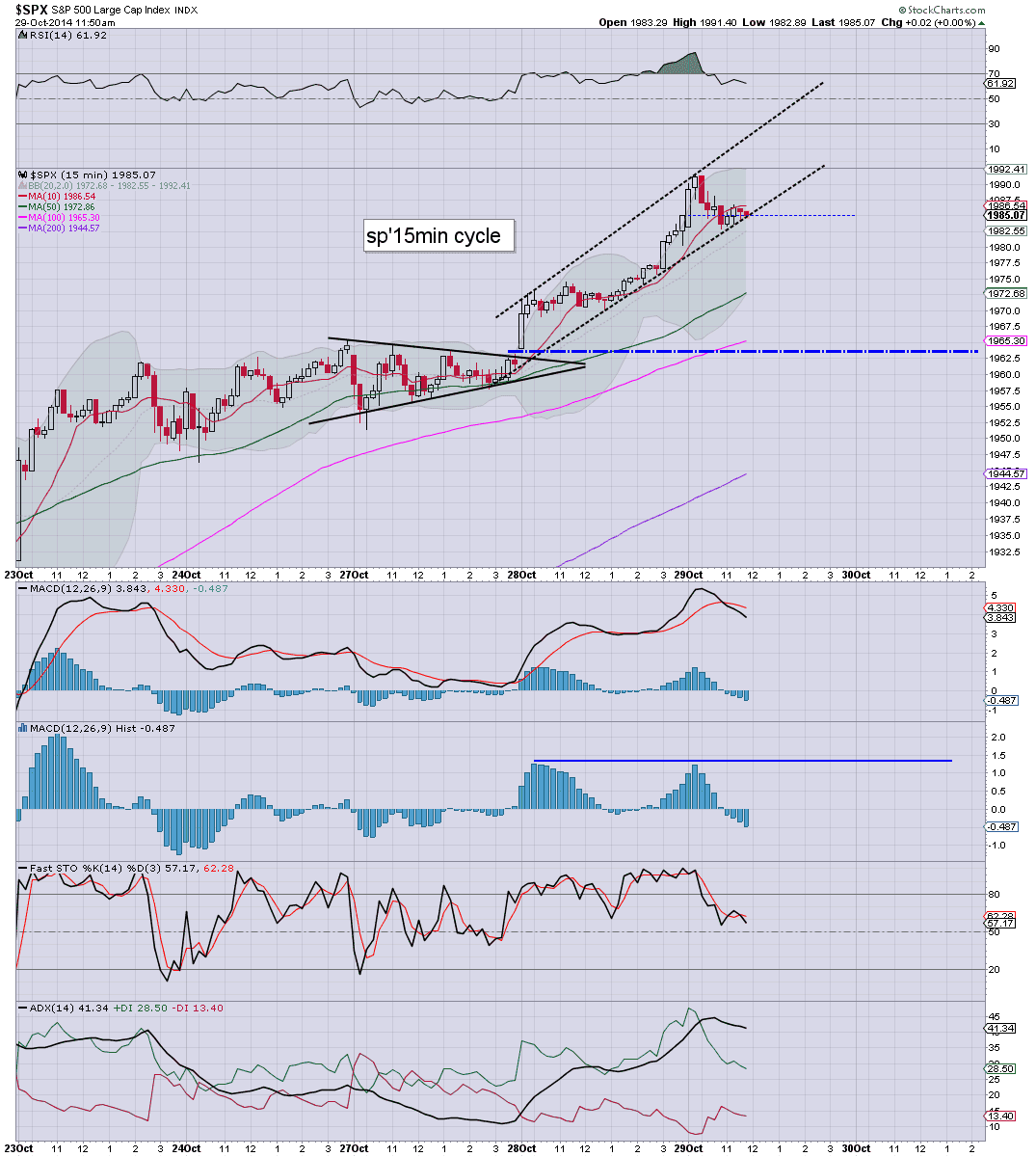 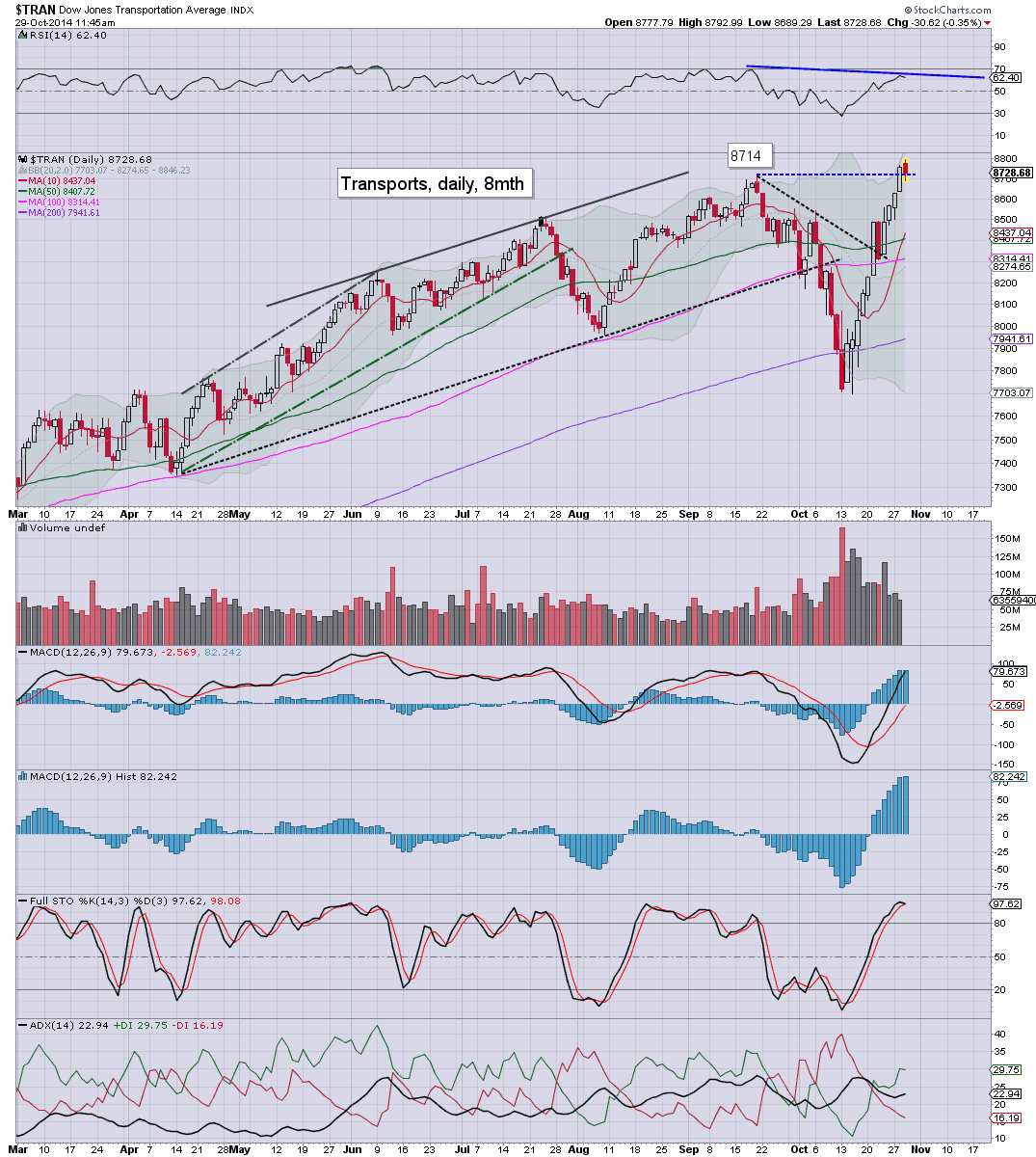 So.. as things are... with the 15min MACD cycle as it is.. we could continue seeing minor weak chop until 2pm.


--
back at 1pm
Posted by Trading Sunset at 15:51:00
Email ThisBlogThis!Share to TwitterShare to FacebookShare to Pinterest

11am update - back to chop mode

US equities are set for a good 3 hours of minor chop ahead of the FOMC announcement (2pm EST, 6PM UK). VIX is somewhat twitchy.. despite the earlier index gains, +6% in the mid 15s. Metals are weak, Gold -$4 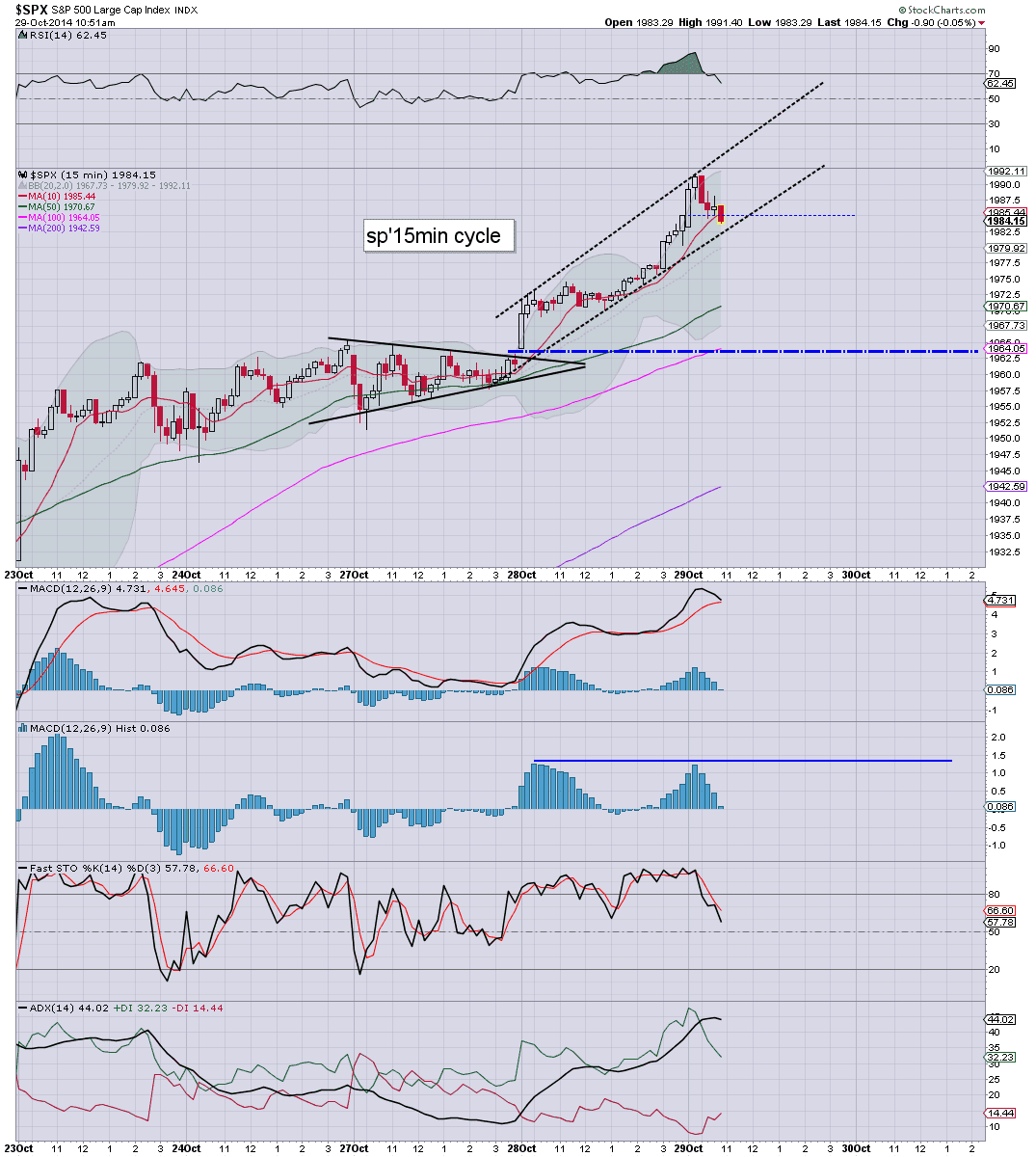 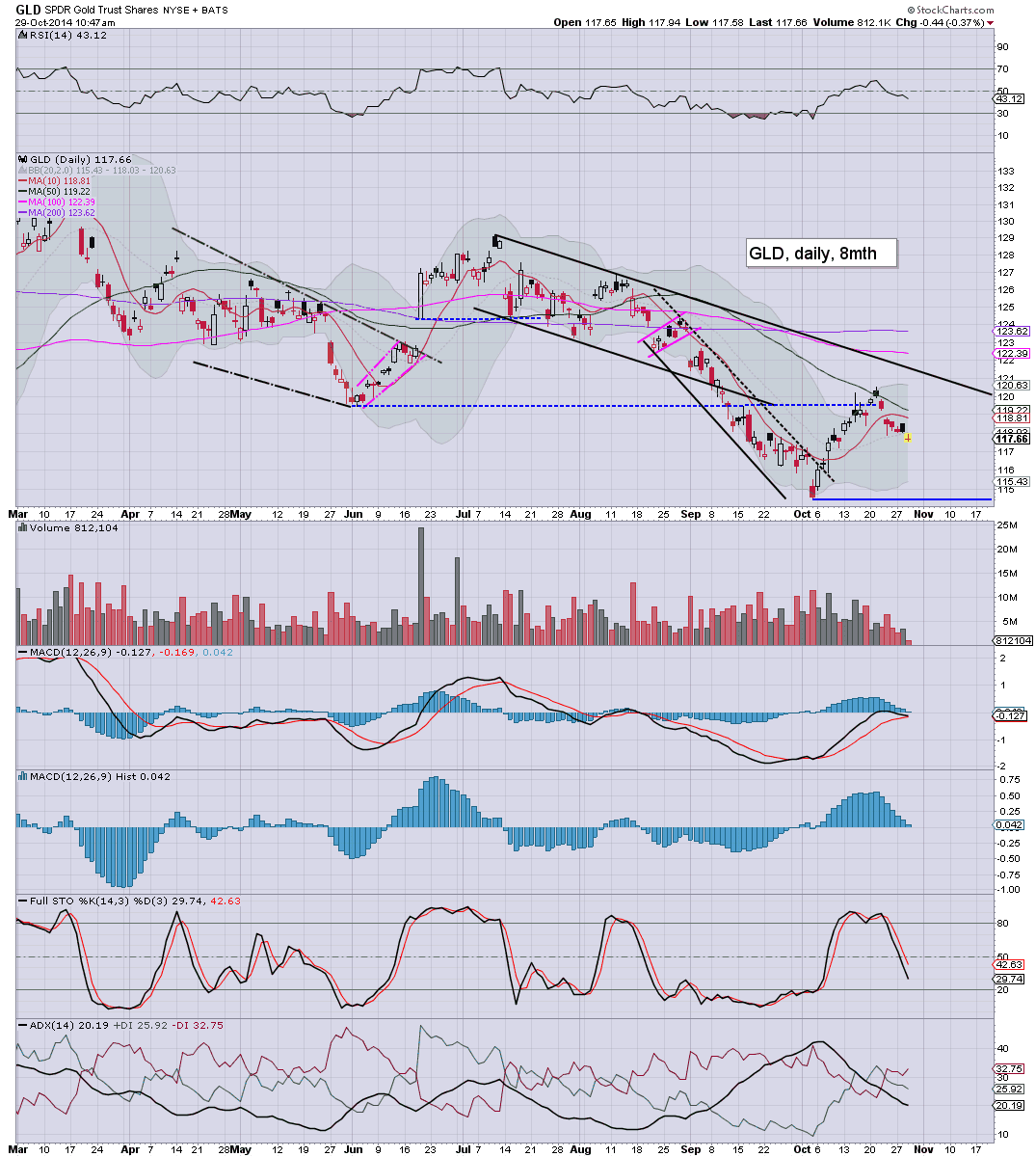 *well, at least my power meter is swapped out, and I am all set for what should be an exciting afternoon.
--

So... 3hrs until the official end of QE3 is announced. No doubt, the press release will detail the usual nonsense talk about 'low rates... as dependent on the data'.

There should not be any surprises, but still... considering the giant ramp across the last 11 trading days, a retrace of some significance is way overdue.
---


11.30am.. the chop continues.... 2.5hrs to go.
Posted by Trading Sunset at 14:52:00
Email ThisBlogThis!Share to TwitterShare to FacebookShare to Pinterest

10am update - I have the power

US equities break a new cycle high of sp'1991, although the VIX is not particularly confirming the move. Metals remain weak, Gold -$4, and this is really impacting the miners, ETF of GDX -1.3%, set to lose the $20s. 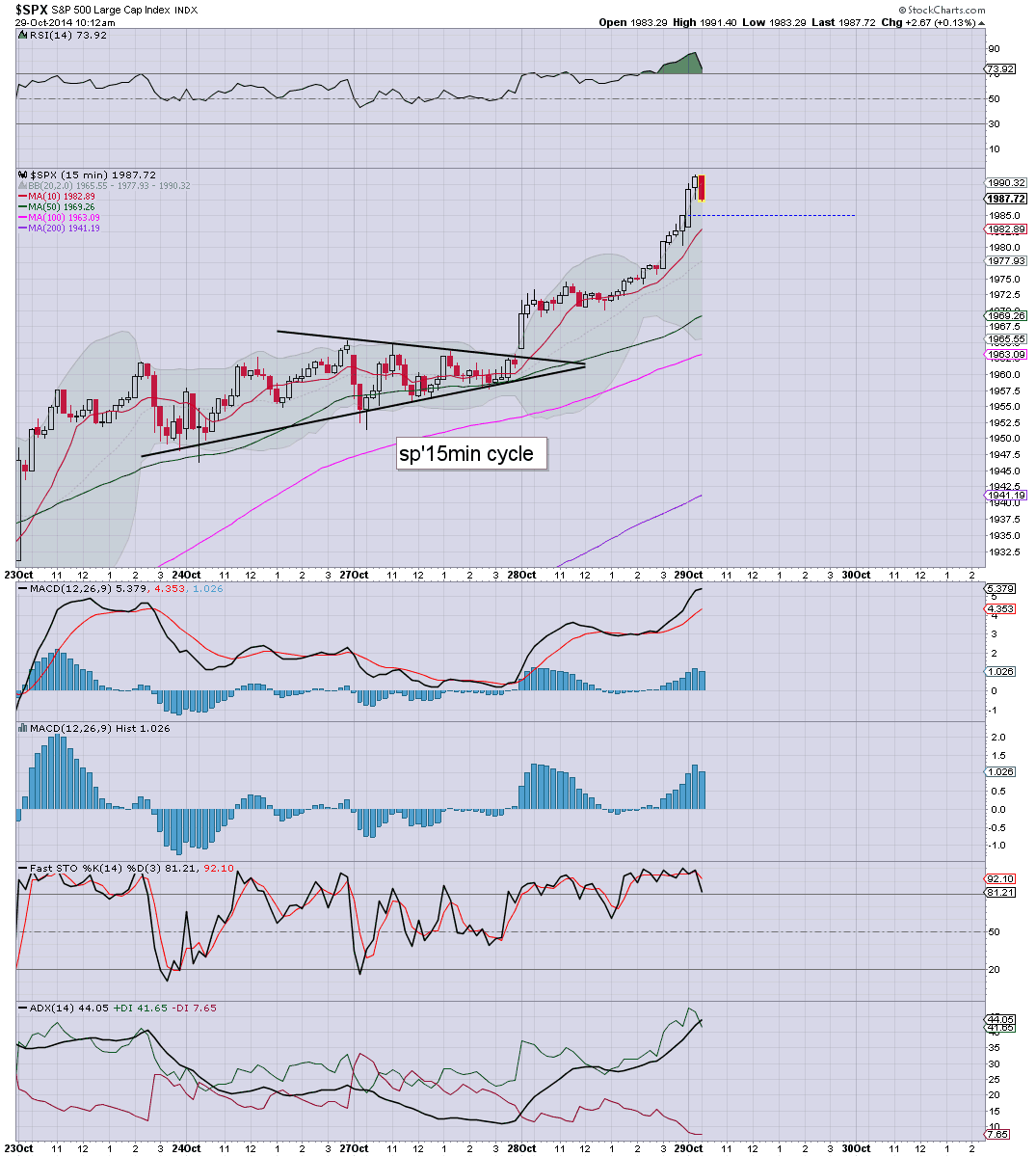 ... the power is back, much faster than expected.... thank the gods.

Momo stocks weak... TWTR -3%... FB -6%  ... near term outlook for those ain't pretty.
Posted by Trading Sunset at 14:16:00
Email ThisBlogThis!Share to TwitterShare to FacebookShare to Pinterest 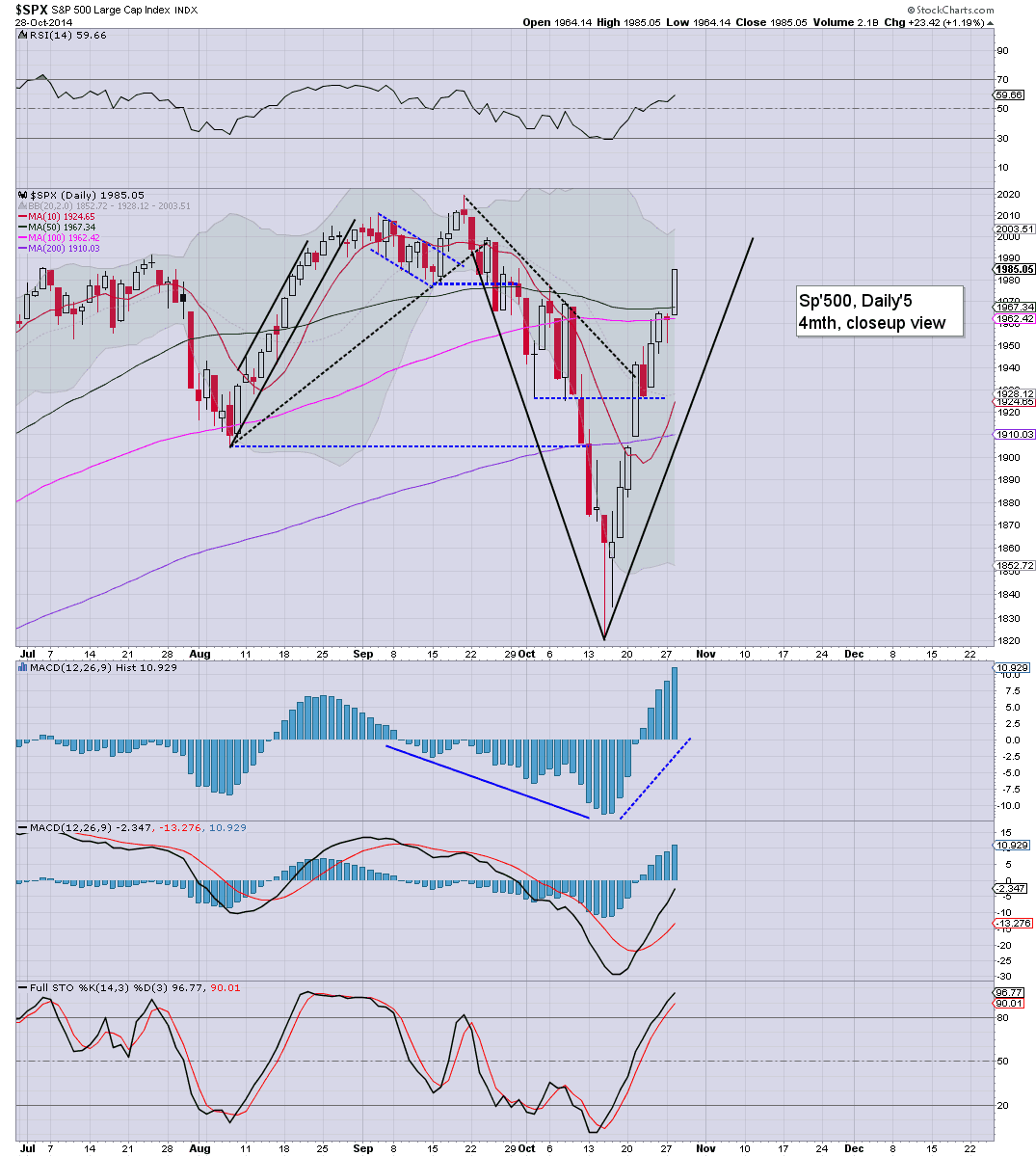 With the break above the 50dma (1967), there is open air to the giant 2000 threshold.. where the upper bollinger is lurking.

I would certainly agree with Oscar on the importance of recognising the new high in the Transports. Although the same situation occurred in summer 2011, and that didn't work out so well for the broader market 3-4 weeks later.

The little rant on Mr Spencer... I also have to agree with.
--

Special note on the metals

The broader trend remains bearish of course, since the spring 2011 break. I'm seeing increasing chatter about another major collapse wave to the giant $1000 for Gold... before year end. That certainly seems possible.

Once Gold is testing the $1000 level... the miners will finally start to become an interesting consideration.


9.25am.. Watching the Cramer on clown finance TV... incredible to see he hasn't hidden in a hole since 2 weeks ago. Not surprisingly, he was utterly bearish at sp'1820.. but now is hyper bullish.

Posted by Trading Sunset at 12:16:00
Email ThisBlogThis!Share to TwitterShare to FacebookShare to Pinterest

QE3 set to be officially terminated

Barring some bizarre change of plan, the US Federal Reserve look set to terminate QE3 tomorrow. The market has not 'gone it alone' in a full two years. The mere psychological loss of Fed support, will be a problem for Mr Market, at least to some degree. 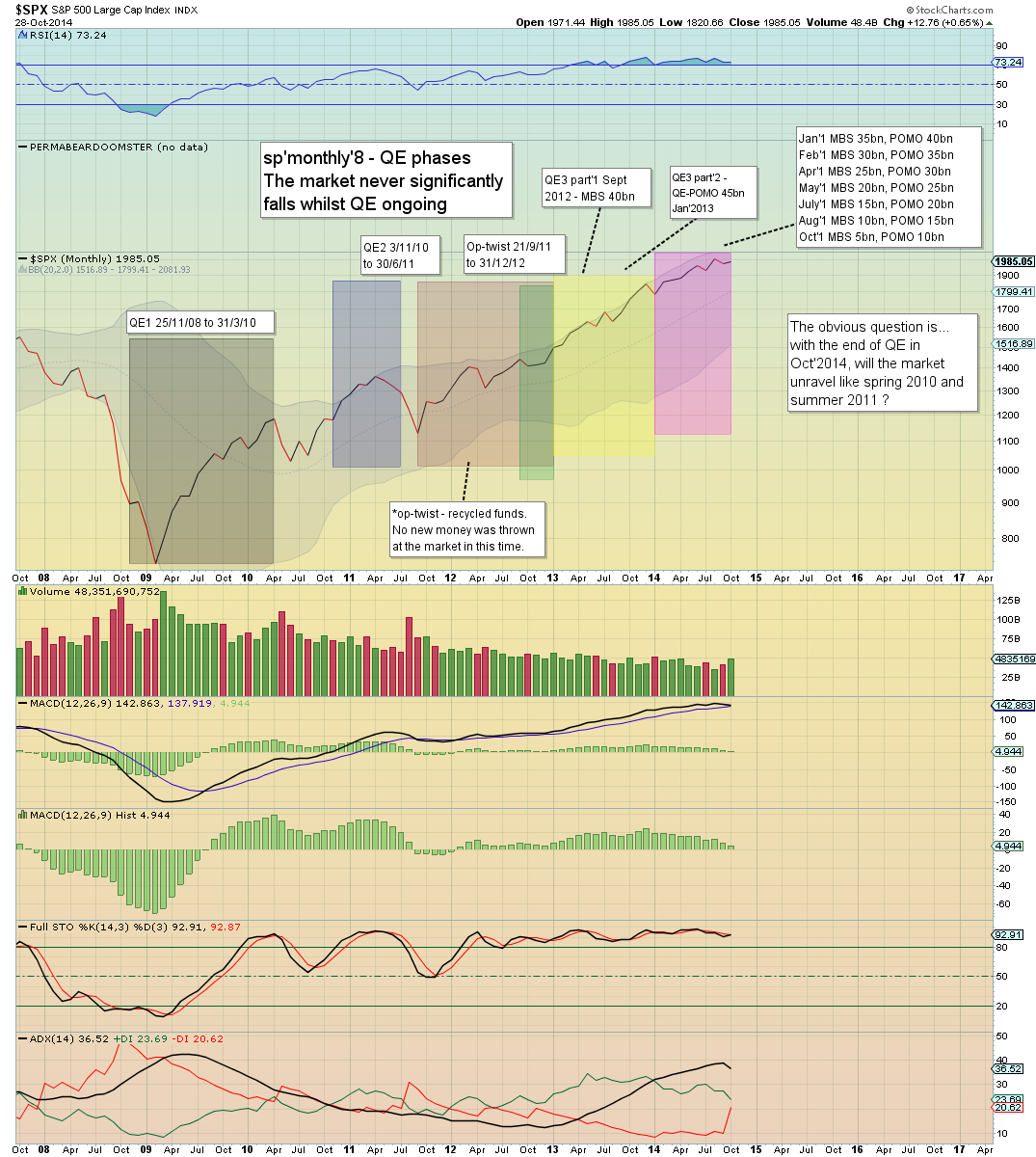 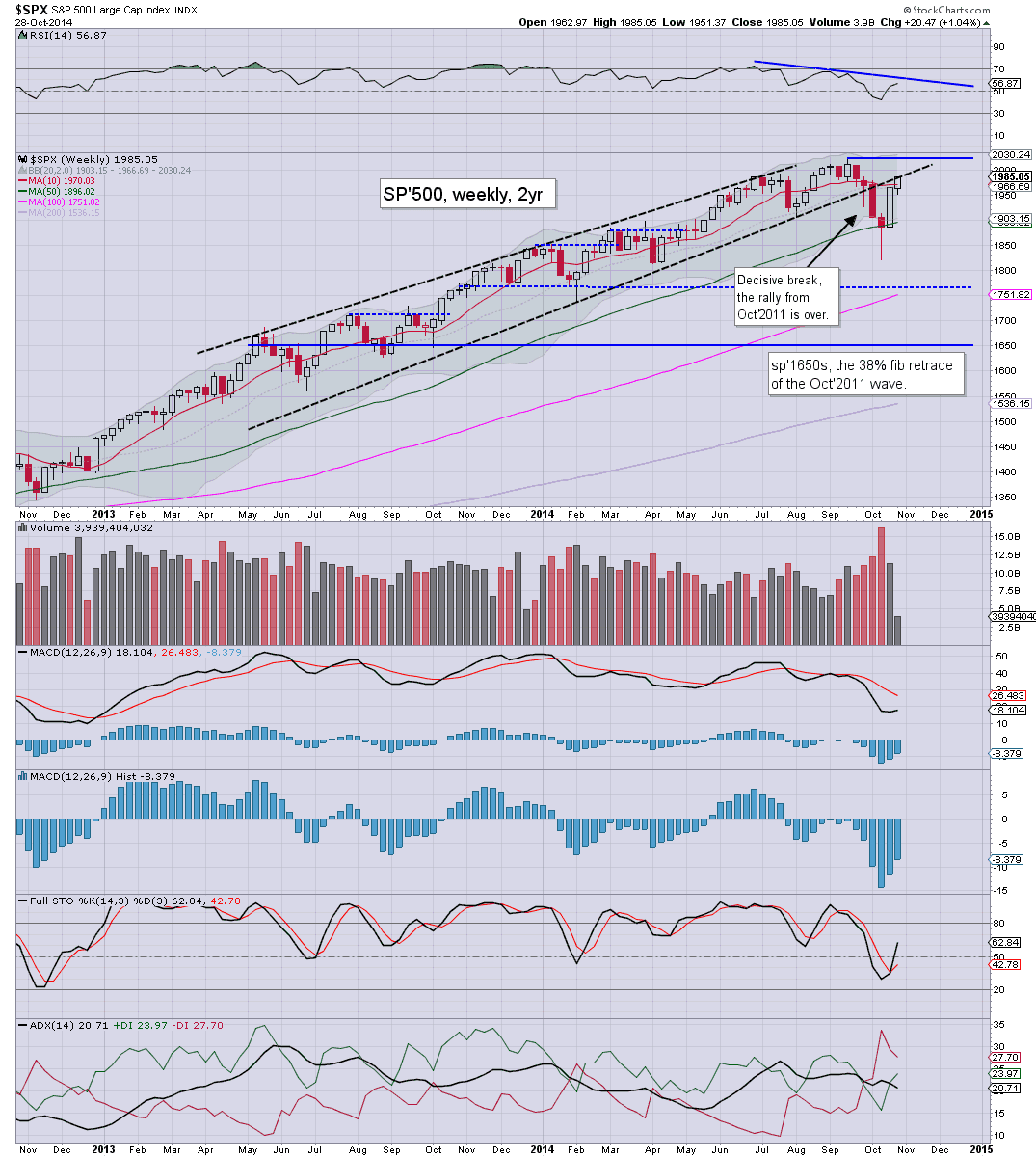 I suppose it could be argued we are back testing the old broken support/trend, but still.. this is one mighty strong bounce.. if it could even be called that anymore.


Not waving the white flag... quite yet

Despite a move above my own 'last line' of the sp'1970s... there is still a moderate chance we'll see a major wave lower in November.

However, with each daily close >1970... it becomes less probable. The fact the Transports broke a new historic high this morning, makes a test of the 1820 low that bit more unlikely.
--

Wednesday will of course be all about the FOMC. The announcement is due at 2pm. There will NOT be a Yellen press conference. Market is expecting the termination of QE3, along with a press release stating 'rates will remain low'.


A busy Wednesday is ahead

Today sure felt like bearish capitulation, as those who are already short were short-stopped in the 1970s. But what about Fed day?

I'll strongly consider an index-short tomorrow, after the 2pm announcement, but it will depend on price action. Personally, I want to see a minor initial spike on the upside, something on the order of 3-6pts, whether that is to sp'1980, 85, or 90s. A retrace of some kind... perhaps to the 1920/00 zone seems viable. Hopes of sub 1900... are pretty faded right now.

Finally, I want to say thanks to those that do say hello during the trading day... its always good to hear from some of you, bearish or otherwise ;)

One of these days the market will blow up.... when it happens.. I'll be there...

US equities continued to climb, sp +23pts @ 1985. The two leaders - Trans/R2K, settled higher by 1.5% and 2.8% respectively. Near term outlook is for a reversal after the next FOMC announcement, but downside increasingly looks limited to 1920/00 zone. 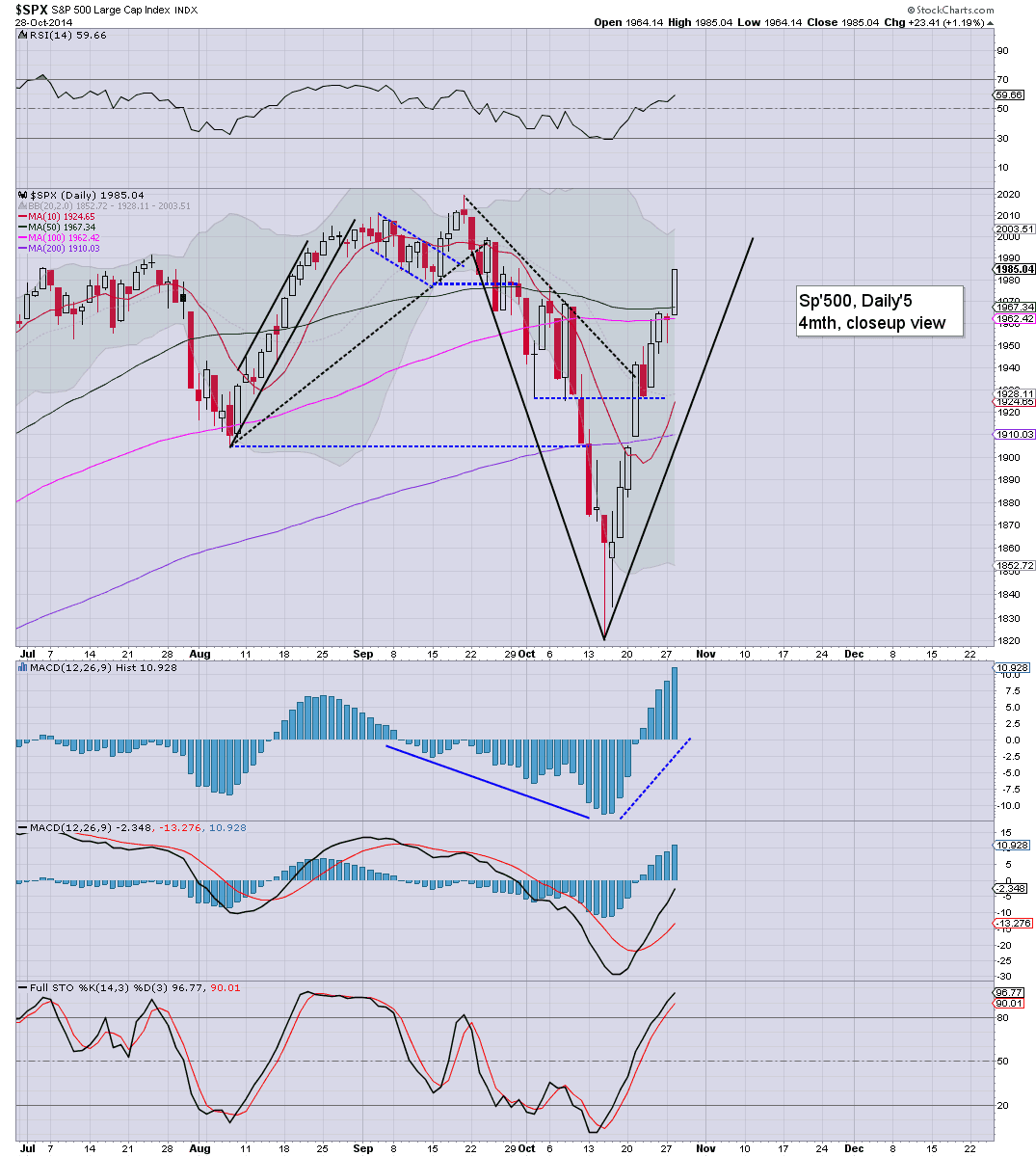 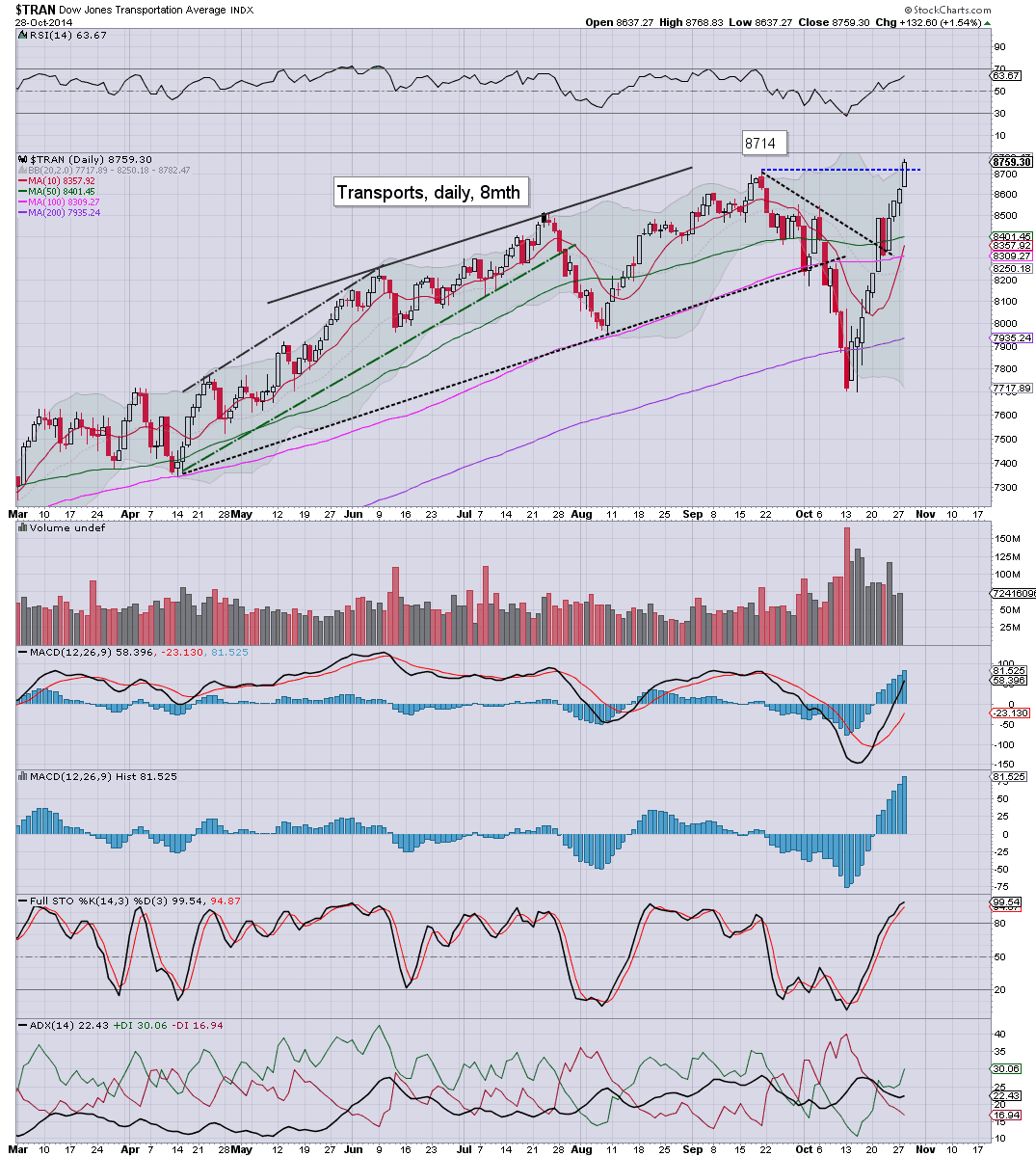 *most notable aspect of today, and perhaps of the entire 9 day rally... the Transports broke a new historic high.
--

So... the broader market continues to rally... and with a new historic high for the Tranny, it bodes well for the bulls.

Even if the market reverses from the FOMC tomorrow afternoon, there would seem more likelihood of flooring in the low 1900s.. than of breaking through it. For many.. not least yours truly... it is not the most pleasing of thoughts.