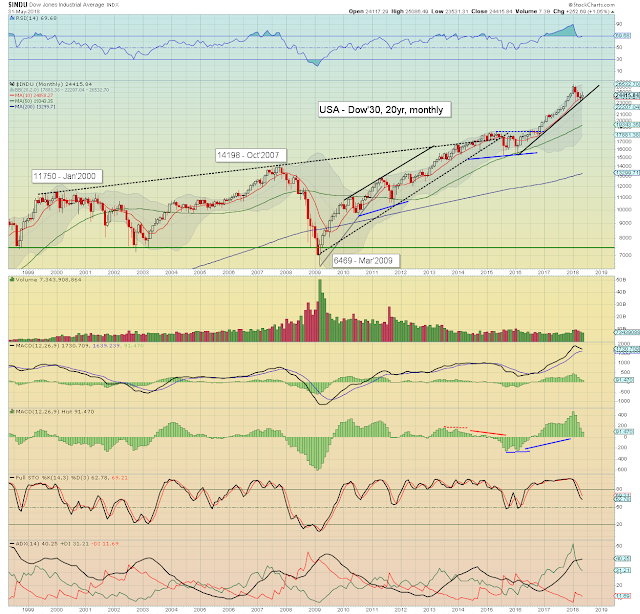 The mighty Dow climbed for a second month, settling +252pts (1.0%) to 24415. Underlying MACD (green bar histogram) ticked lower for a fourth month. However, price momentum is levelling out, and a bearish cross could be avoided into the summer. Note the key 10MA at 24058.

Best guess: another push upward, at least to challenge the Jan' historic high of 26616. Next key Fibonacci number is 26702. Any price action above that would indirectly be suggestive that the sp' will eventually follow >3047, and that would offer 5K on 2-4 year outlook. Sp' 5K would equate to Dow around 40k. To be clear though, I do not expect the sp' to be able to clear 3047 in the current wave, and instead would seek a major correction of at least 15-20%. 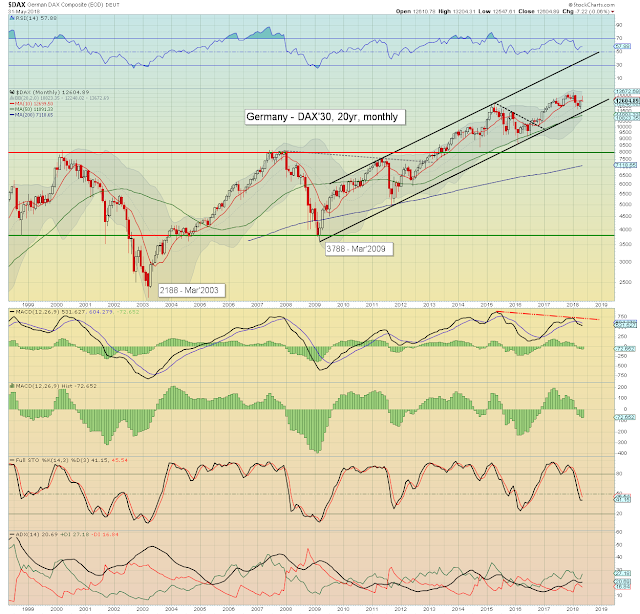 The economic powerhouse of the EU - Germany, saw the DAX settle -7pts (0.1%) to 12604. This was notably under the 10MA. The May candle is rather spiky on the upper side, and it leans s/t bearish. From June onward, core rising trend - from the 2009 low, will be around 11500. Any price action in the 11400s would merit full alarm bells, with a natural target of 8k. For now, the mid/long term bullish trend is still intact.

The systemic risk that is Deutsche Bank (DB) is clearly a critical issue. Negative rates from the ECB are killing the European financials, and Mr Market didn't just break a new historic low in this stock for no good reason. Its a monstrous problem, but no doubt the ECB would just ring fence the company, and print however many trillions is necessary to prevent the derivatives book from catching fire. After all, would you really expect Draghi (or his successor) to just sit back and see it take down the entire EU financial system? 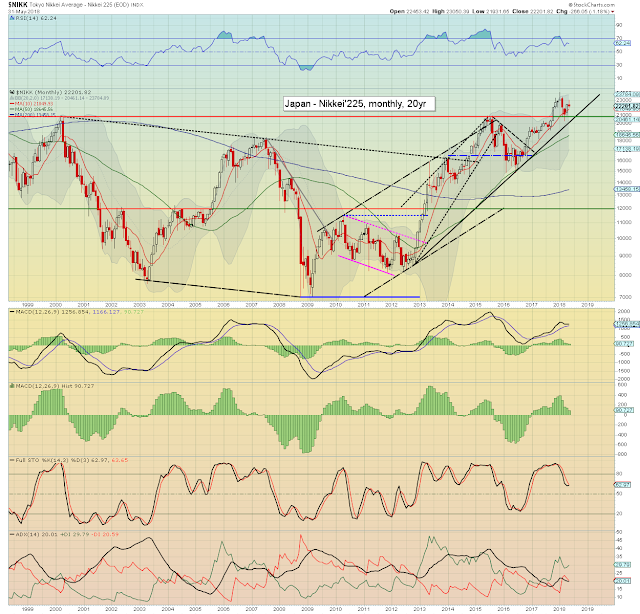 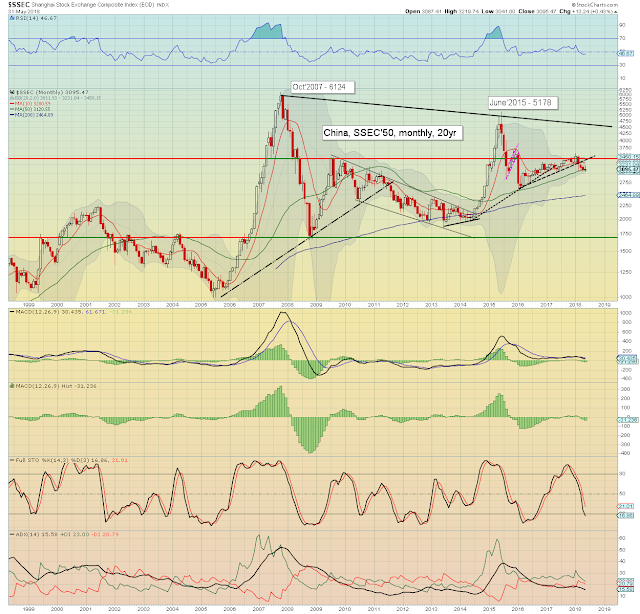 The Shanghai composite gained 13pts (0.4%) to 3095, but that was well below the intra high of 3219. Chinese equities are indeed struggling. Things really only turn bullish again with a monthly close >3500, and there is little sign of that for at least 3-4 months. 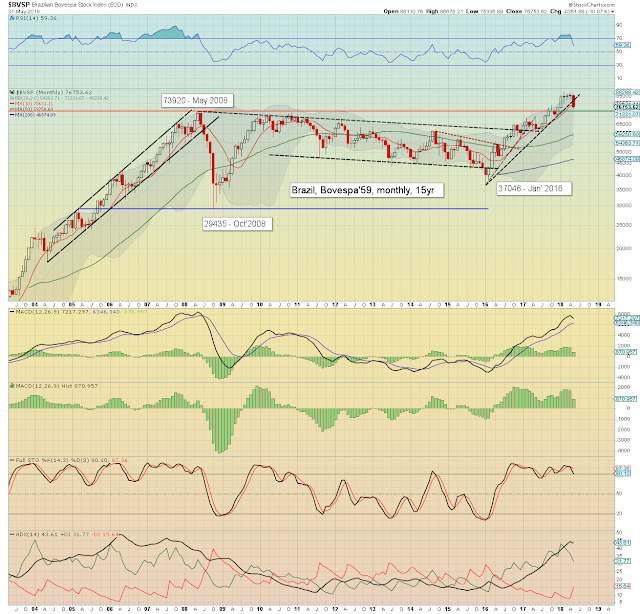 After three months of chop, the Brazilian market found a direction, and it was powerfully to the downside. The Bovespa imploded by -9361pts (10.9%) to 76753. There was a decisive break of the m/t bullish trend from early 2016. Next support is the key price threshold of the 74000s. There is ongoing societal/political upset in Brazil. Whilst higher commodity prices are beneficial to the energy sector, higher fuel prices are breaking the transport sector. Recent turmoil within Petrobras (PBR) - not least the Friday resignation of the CEO, sure isn't helping the Bovespa. 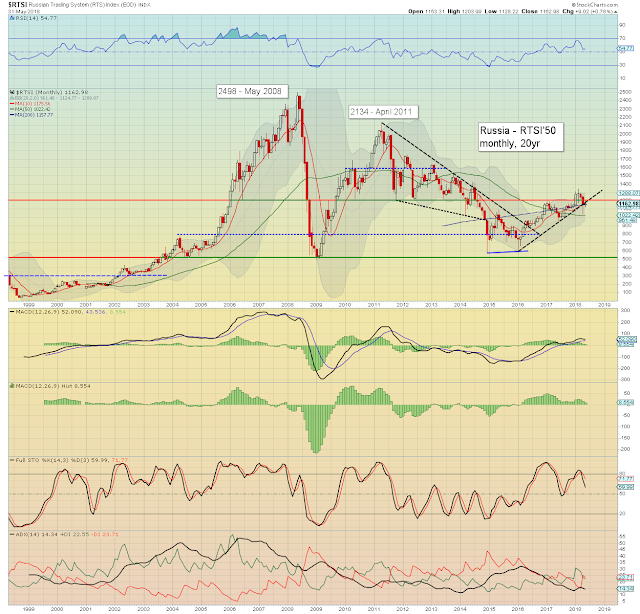 The Russian equity market saw a month of relatively narrow range chop, settling +9pts (0.8%) to 1162. Whilst the RTSI remains under the key 1200 threshold, the s/t outlook has to be bearish. If the RTSI can re-take 1200, then original basic target of 1500 will be back on the menu. Higher energy prices would especially help the Russian market. 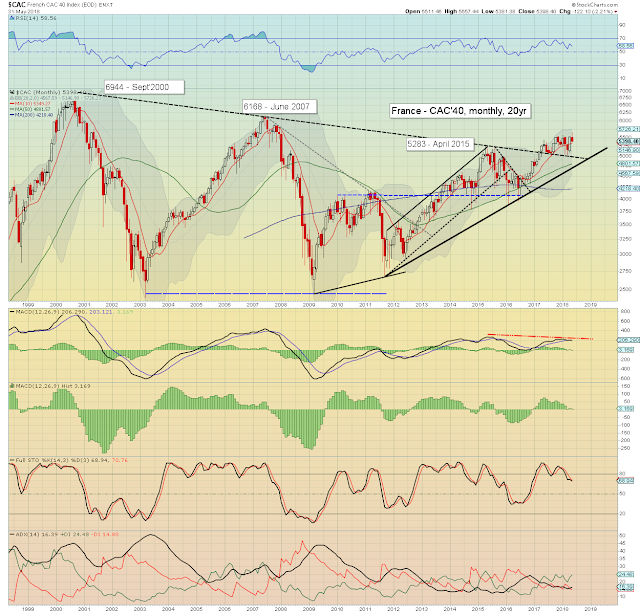 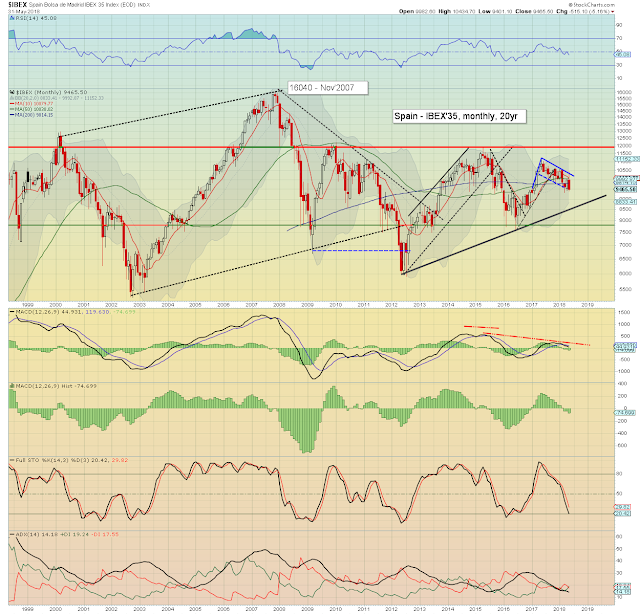 The Spanish market settled -515pts (5.2%) to 9465. We have a very clear cyclical divergence from 2015, as price momentum is outright bearish. With PM Rajoy kicked out on Friday, there remains a serious underlying geo-political instability. That could arguably apply to most nations within the EU. 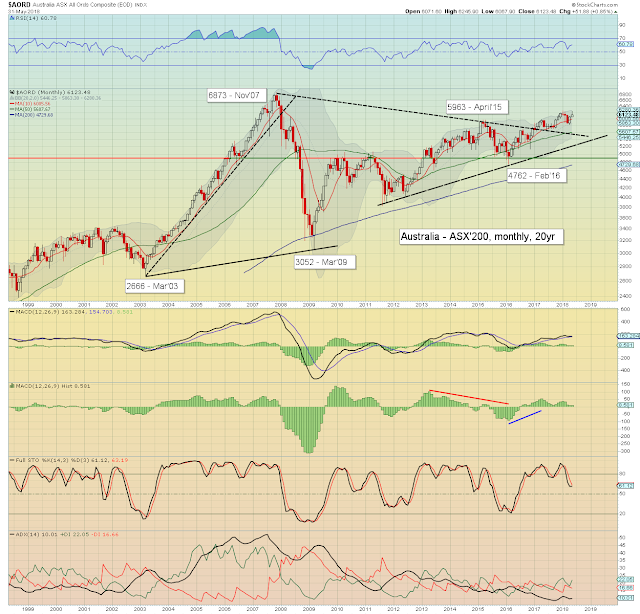 The Australian market climbed for a second month, +51pts (0.8%) to 6123. Next big target remains the Nov'2007 historic high of 6873. That is a clear 10% higher, but looks viable within 3-4 mths. Higher commodity prices would really help this market/economy. 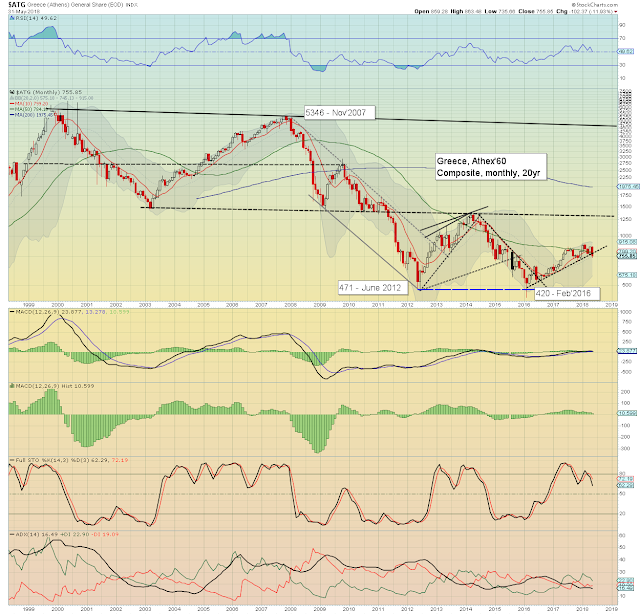 The economic basket case of the EU - Greece, saw its equity market implode, with the Athex settling -102pts (11.9%) to 755. The m/t trend from early 2016 has been decisively broken, and it bodes at least s/t bearish into early summer.
--

Four markets were net higher for May, with six net lower.

The US remains the powerhouse of world equities, with Greece the weakest.

We have two notable breaks of the m/t trend from early 2016, in the Brazilian and Greek markets.
--

The last few months have seen increasing equity breaks arise, not least due to higher bond yields/rates and commodity prices. Whilst US financials and the energy sector will greatly benefit from the aforementioned, there is a downside element. The Brazilian unrest is one of the more troubling issues, and that is with oil only seeing the $70s. What happens if we see a spike to 80, or even 100?

For now, the leaders - USA and Germany, are maintaining their mid/long term upward trends. When those eventually break, it will bode for a correction far bigger than we saw across late Jan'-early April. My best guess is that we'll see upside across the summer, but after that wave has maxed out, it will make for one hell of a cyclical divergence to the January high.

Yours truly is holding to original big target of sp'2950/3047, That arguably equates to Dow somewhere >27k. If we do make it to around sp'3K, the more cautious retail traders/investors will be clearing the decks, in prep' for something 'real interesting'.

... the ultimate 'equity/economic' alarm bell would be if the fed cut rates. First, I do expect a June hike. Further, if equities do climb this summer to new highs, with GDP >3.0%, then a Sept' hike can also be expected. That would be problematic for many things though, with the US 10yr yield likely to begin a surge towards 3.50-3.75%.

*Pres' Trump is set to attend the G7 meeting (Canada) June 7-8th. Ahead of that, the trade/tariff chatter will surely continue, and that would be one excuse for the market to take another swing lower.
--

*the next post on this page will likely appear 6pm EDT on Monday.
Posted by Trading Sunset at 17:00:00
Email ThisBlogThis!Share to TwitterShare to FacebookShare to Pinterest
Newer Posts Older Posts Home
Subscribe to: Posts (Atom)