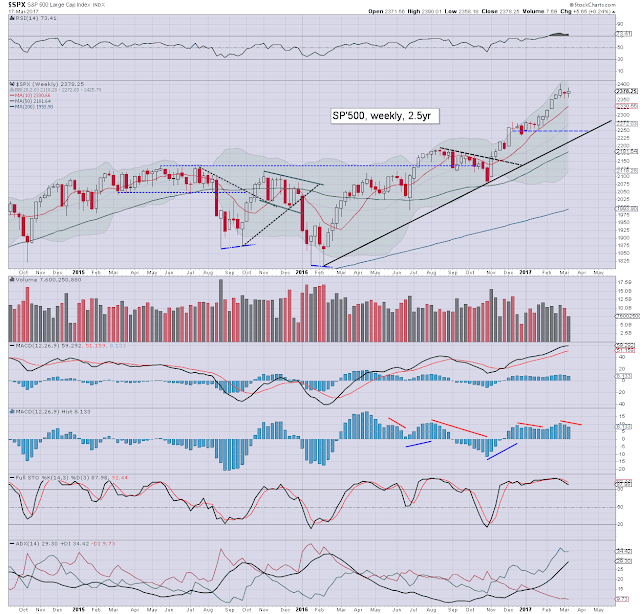 The sp'500 traded within a narrow range of just 32pts, with a net weekly gain of 5pts (0.2%) to 2378. Underlying MACD (blue bar histogram) cycle ticked lower for a second week, but remains strongly positive. The key 10MA is currently at 2330, and will be around the 2400 threshold by mid/late April.

Best guess: Another push into the low/mid 2400s seems due into April earnings. The 2500s seem a given, the only issue is whether that is briefly delayed by a 'spooked mainstream' - via the French elections. The 2600/700s remain a valid target by year end. 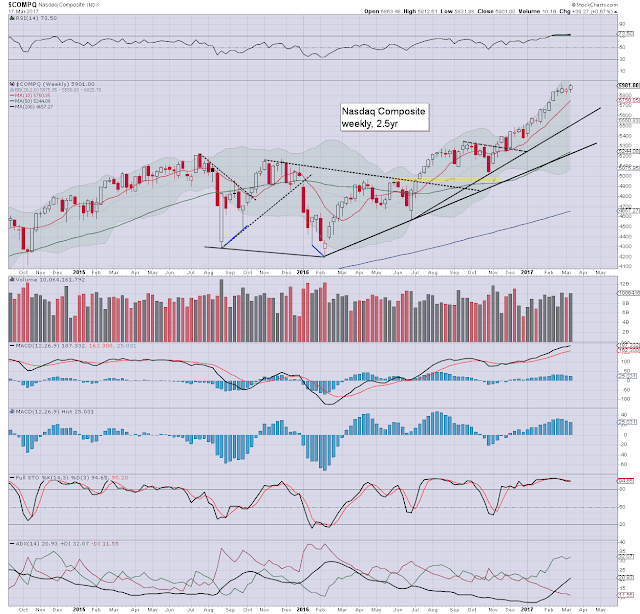 The tech continues to lead the way higher, and its notable that Friday saw a new (if fractional) historic high of 5912, with the Nasdaq settling net higher by 0.7% at 5901. The broader trend remains powerfully bullish, as the 6000s are clearly within range into April. Core support at the 5k level is now 901pts (15%) lower, and looks very secure for the long term. 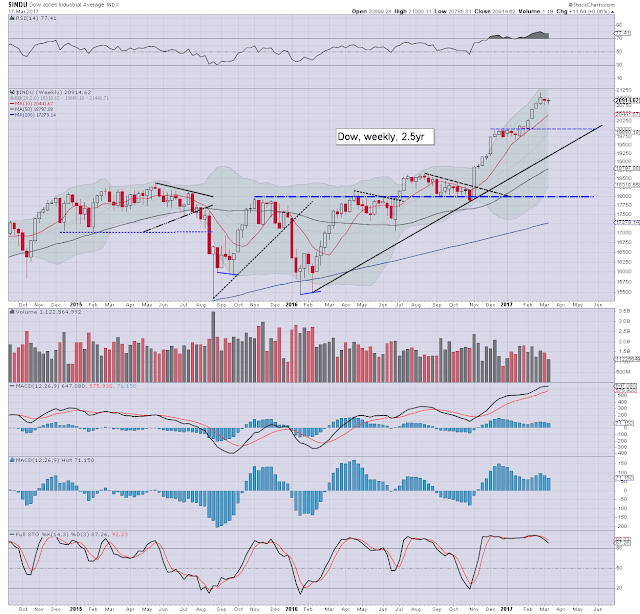 The mighty Dow saw a fractional net weekly gain of 0.1%, settling at 20914. First big support is the 20k threshold, and its ironic that the equity bears will be lucky to see that tested, if the Dow first pushes to around 21500 in April. A yearly close in the 23000s seems very viable, so long as the econ-data and earnings continue to come in 'reasonable', with the fed raising rates at least twice more. 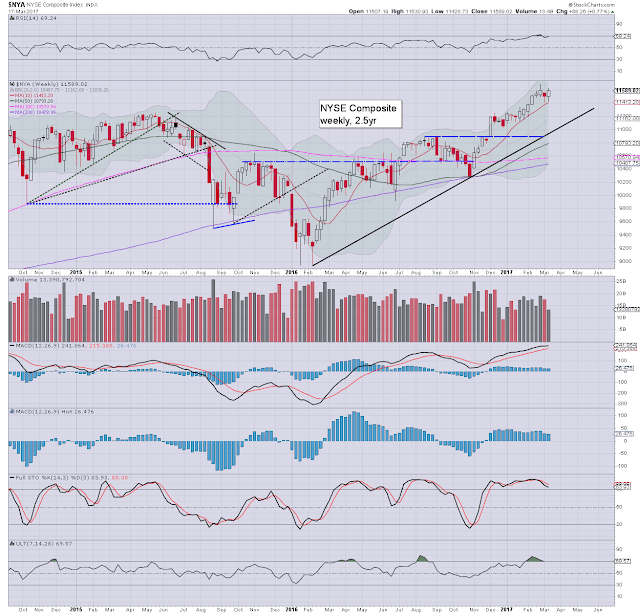 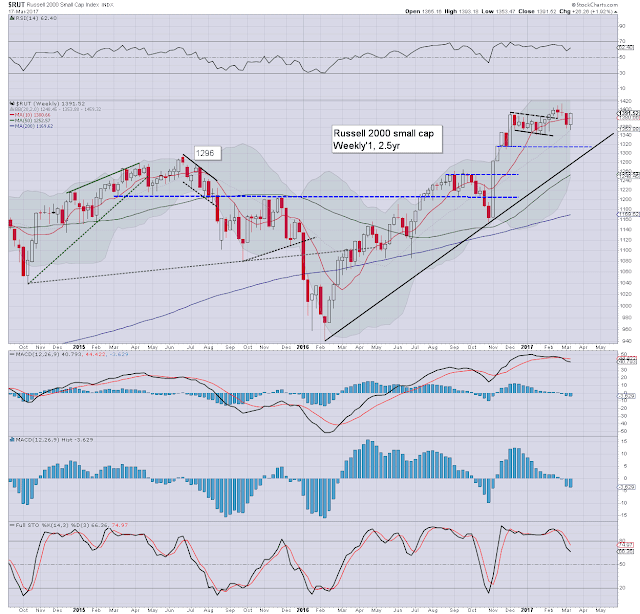 The second market leader - R2K, saw a rather significant net weekly gain of 1.9%, settling at 1391. Its notable that whilst prices remain close to recent historic highs, underlying MACD continues to cool from grossly overbought levels, and is now moderately negative for a third consecutive week. There are a fair few aspects of support within the 1320/00 zone, and that looks set to hold in any market retrace this spring/summer. A year end close in the 1600/700s appears highly probable. 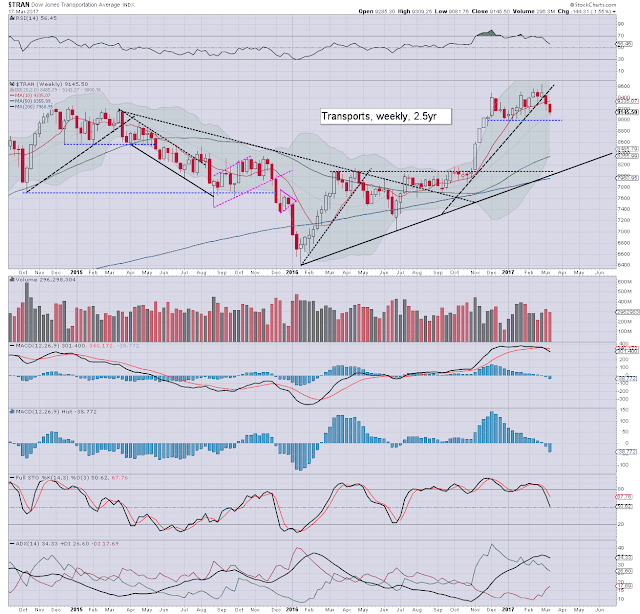 The old leader - Trans, is still a bit of a lagged, falling for a second consecutive week, with a net decline of -1.5% to 9145. The 9k threshold does look secure in the near/mid term, as another push upward toward the giant psy' level of 10k is due - certainly by mid summer. A year end close in the 11/12k zone seems viable.
--

Recent price action has been somewhat choppy, but all US equity indexes are holding within the upward trends that stretch back to the key lows in early 2016.

All indexes remain close to historic highs, even the somewhat laggy Transports.

The year end target of sp'2683 remains on track.

Equity bears have nothing to tout, even if the market retraces around 5%, which currently looks off the menu until at least late April/May.
--

A pretty light week is ahead.

*notable earnings: Lennar, Fedex, and Nike - all on Tuesday.

*there are a fair number of fed officials on the loose. Yellen appears early Thursday at some community dev' conference, and I'd imagine it might capture some mainstream media attention. Kashkari is due at 12pm the same day, and the issue of his dissent against the March rate hike will likely be raised. Friday will see a trio, including the bane of the equity bears - Bullard.
--


If you value my postings, you can subscribe to me, which give you access to my continuing intraday commentary. I post around 220-240 times a month, focusing on US equities, but also a broad array of market related issues.

The cost is $20pcm - roughly $1 per trading day. Or... you could buy one share of SNAP per month (or two shares by late summer).

--
Another way you can support my work is by simply re-tweeting anything from https://twitter.com/permabear_uk   It would make a difference!

*the next post on this page will likely appear at 7pm EST on Monday.
Posted by Trading Sunset at 16:00:00
Email ThisBlogThis!Share to TwitterShare to FacebookShare to Pinterest
Newer Posts Older Posts Home
Subscribe to: Posts (Atom)