Special note: After some consideration, I have replaced Spain, France, and Greece, with South Africa, India, and Hong Kong.
-- 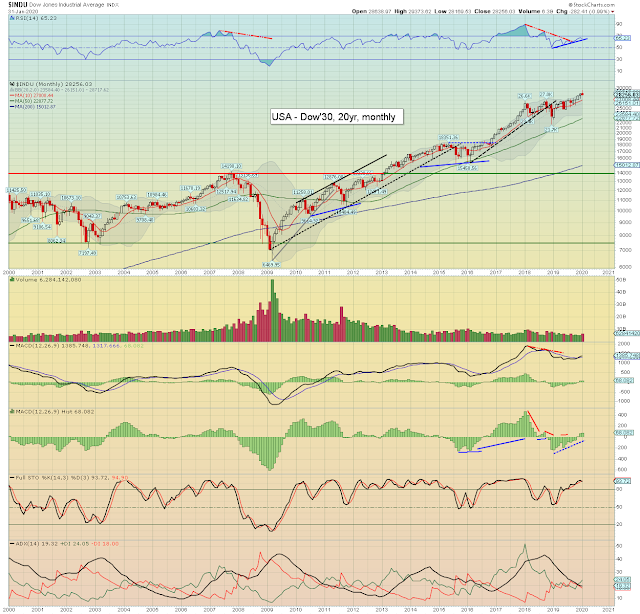 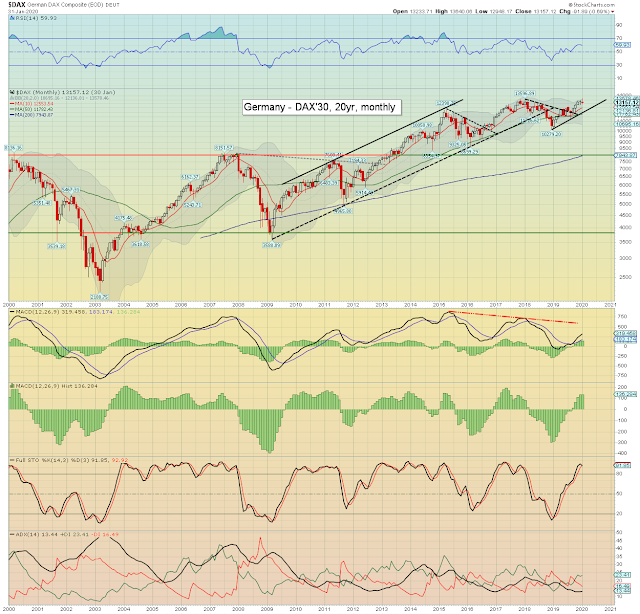 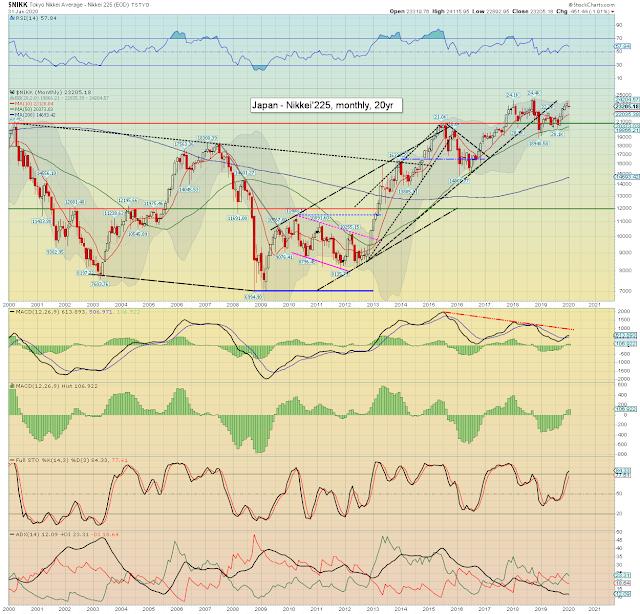 Japanese equities settled -451pts (1.9%) to 23205, but notably still above the key 10MA. There remains a monstrous technical/cyclical divergence that stretches back to 2015. 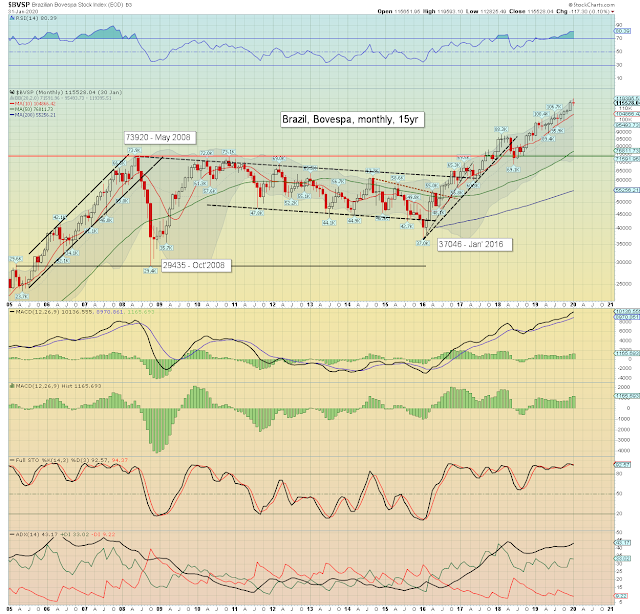 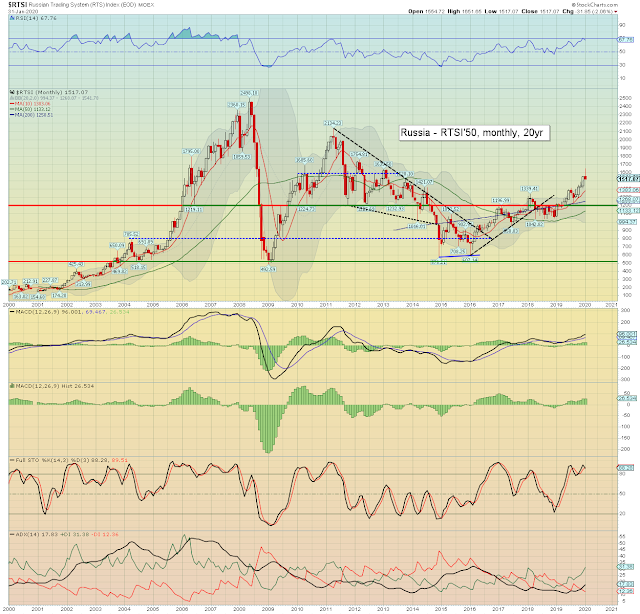 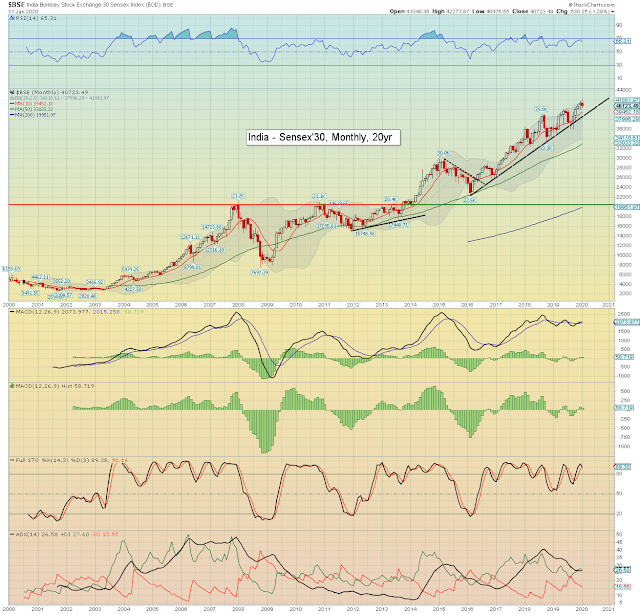 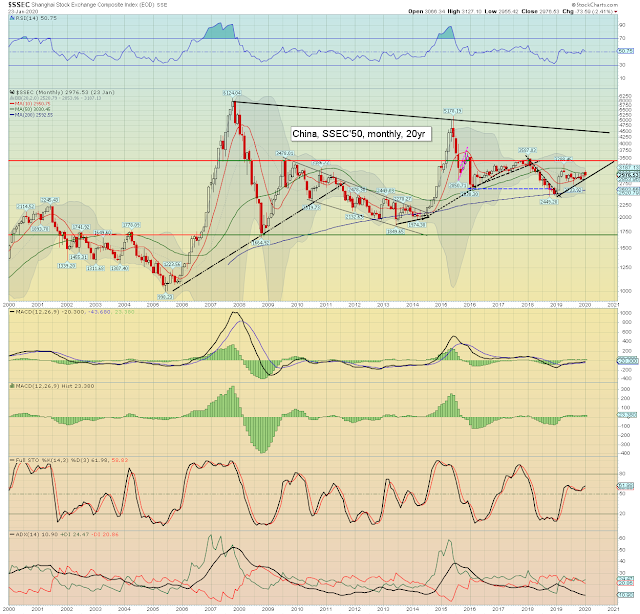 First, note that the last day of January trading in China was the 23rd. The Shanghai comp' swung from a high of 3127, to settle -73pts (2.4%) to 2976, although that was still above the key 10MA. Any price action under the Dec' low of 2857 would merit s/t alarm bells, and offer the lower bollinger in the 2500s. Considering the Corona virus, the latter appears a very high threat.

The Chinese market is currently scheduled to re-open Monday Feb'3rd. However, its entirely possible the communist leadership will decide to push this out another week on 'health grounds'.
-- 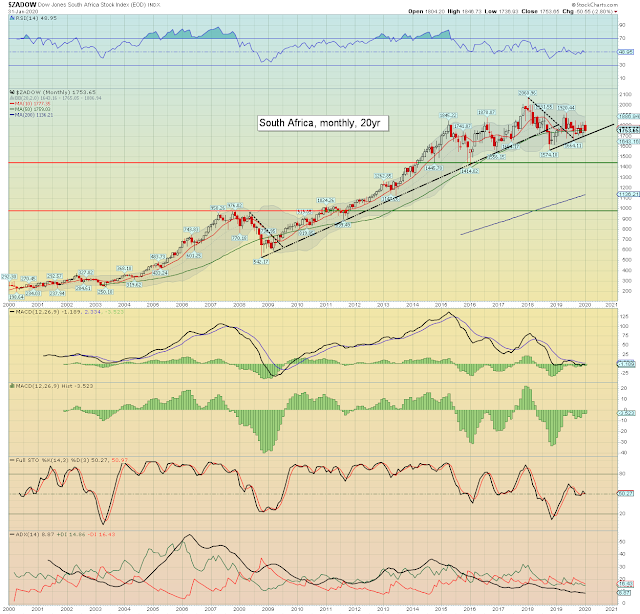 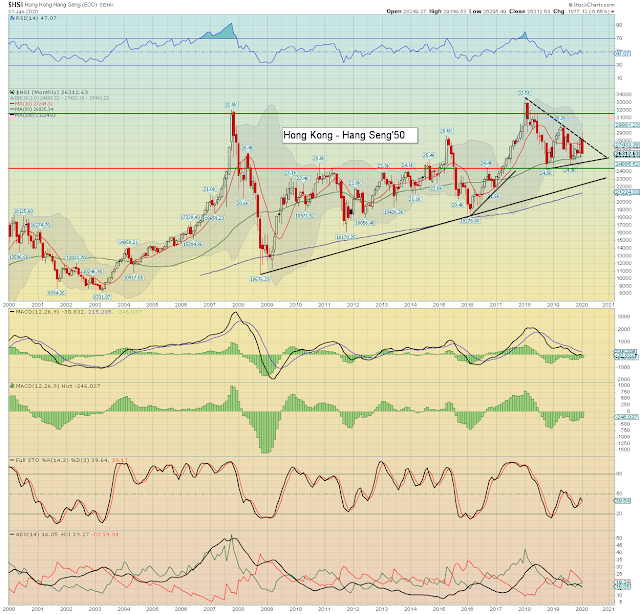 The Hang Seng saw a high of 29149, which was notably above m/t descending trend, but swung powerfully lower, settling -6.66% to 26312. The January settlement was notably under the key 10MA, and bodes for further downside. Next support around the 25200s. Eight markets settled the month above their respective monthly 10MA, the two exceptions were South Africa and Hong Kong.
-

Another very busy week is ahead. It will be complicated by further sporadic Coronavirus headlines.

Key event 1: Monday Feb'3rd will see the Democrat Iowa caucus. It is clearly the case that the market will not be pleased if Sanders or Warren poll better than Biden, which does appear very probable.

Key event 2: Tuesday, 9pm EST, is scheduled to see the 'State of the Union' (SOTU) address by the US President. That will no doubt capture considerable media attention.
--

The next few weeks will likely be wildly volatile. The Corona virus is a problem, but whether it becomes something of significance to the global economy/financial system, is very difficult to say.

Mr market will be increasingly focused on whom the Democrat nominee might be. Bernie Sanders will likely poll better than most are expecting, and that won't please many within the financial world.

An equity market washout of around 10% is very much viable within February. It should be clear though, any significant market/economic upset will see the central banks respond with further rate cuts, and printing even faster. Further, we can expect fiscal stimulus from various governments this year.

Sunday will see the Superbowl, but whilst that is going on, China will (likely) be reopening, and the futures will be worth checking at least a few times between plays. One thing is for sure, next week won't be boring!


If you value my work, you can support me via http://paypal.me/permabear, or subscribe to my intraday service. For details, and the latest offers: http://permabeardoomster.com/

I will endeavour to cover as many of the end month settlements across the weekend, via https://twitter.com/permabear_uk

Have a good weekend
--
*the next post on this page will likely appear 5pm EST on Monday.
Posted by Trading Sunset at 17:00:00
Email ThisBlogThis!Share to TwitterShare to FacebookShare to Pinterest
Newer Posts Older Posts Home
Subscribe to: Posts (Atom)