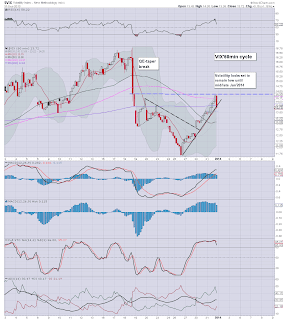 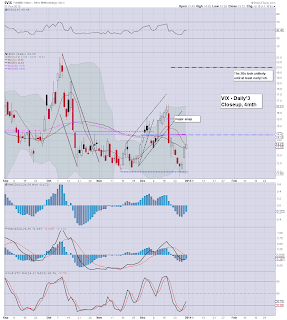 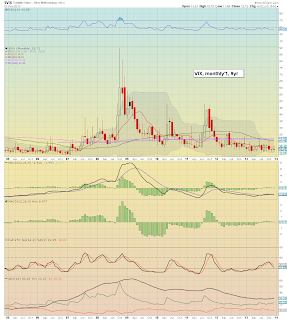 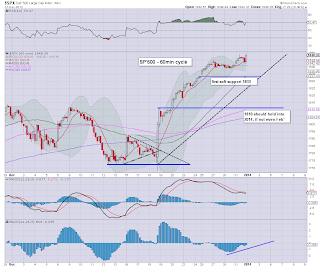 
For now...that will suffice.

*the usual bits and pieces across the evening to wrap up today.

Please also note, I'll be doing end year updates for the Gold Miners, Gold/Silver, and my still rarely visited MARCON page..the latter of which won't really come in use until late 2015/16.
--

Sincerely......my best wishes to you all for 2014
Posted by Trading Sunset at 21:03:00
Email ThisBlogThis!Share to TwitterShare to FacebookShare to Pinterest

With one trading hour left of the year, the indexes have slipped an astounding...if not horrific 35 dow pts from the earlier historic high of 16563. Circuit breakers ..on standby...yes? VIX looks set to close the year in the low 14s. 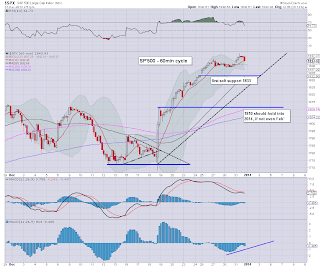 ...updates into year end (what else would I do?)


3.23pm...after all..why would they let the indexes close red after a year like today?

yours..not at all biased, ;0
Posted by Trading Sunset at 19:53:00
Email ThisBlogThis!Share to TwitterShare to FacebookShare to Pinterest

Just two hours left of the trading year...are we having fun yet? The main indexes are holding moderate gains, with the VIX attempting a close in the low 14s. Perhaps most notable of the year, the VIX high for 2013 was a mere 21...which makes the 2012 peak of 27 look high in retrospect! 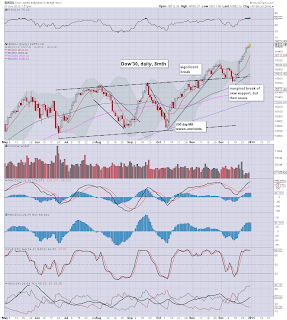 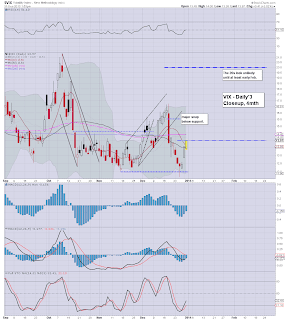 Underlying pressure is to the upside (as ever)...a year end close in the sp'1850s would really top off what has been a crazy QE-fuelled year.
-

Whilst the main market holds moderate gains, most notable today..and arguably the month, the NYSE Comp' has finally broken the Oct'2007 high of 10387. The Nasdaq Comp' is now the remaining main index yet to break its historic highs - the 5100s..a considerable 25% or so higher. 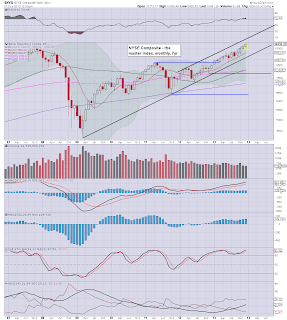 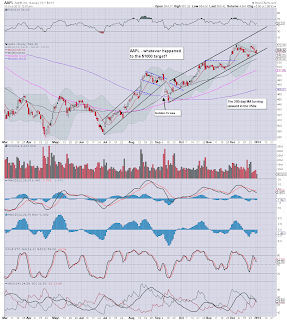 *AAPL looks strong on the daily/monthly charts. The $600s in January..very viable.
--

I realise for many, its not that notable, but really, the break of the NYSE comp' above the Oct'2007 high, is pretty significant. Target for the late spring remains the 11000s.
Posted by Trading Sunset at 17:52:00
Email ThisBlogThis!Share to TwitterShare to FacebookShare to Pinterest

US equity indexes break to new highs, with the sp +0.3% in the upper 1840s, a year end close in the 1850s is certainly viable...not that it should particularly matter! Weekly charts are offering the 1870/80s in the near term. Metals are holding gains, with Gold +$11 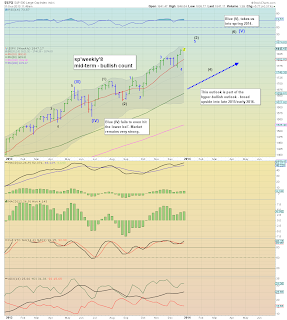 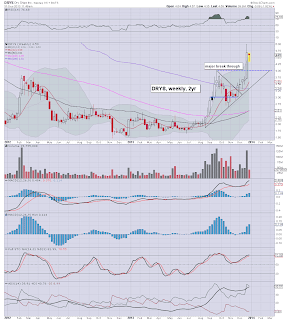 re: DRYs, looks like we have seen a minor pull back..and now we're set to battle into the 5s..with a potencial swift move to the 6s.
--

Who would dare short this right now?
--

time for tea :)
Posted by Trading Sunset at 16:53:00
Email ThisBlogThis!Share to TwitterShare to FacebookShare to Pinterest 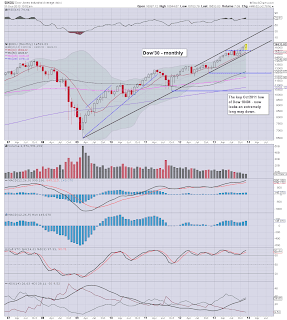 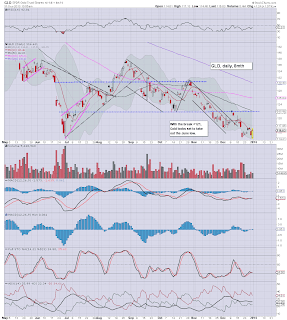 Well, I've taken my lunch, so...I'm kinda waking up again, ha.
-
Ahh yes..year end..things all get a little tiresome..but hey..tomorrow is free at least..we can rest then :)

My much touted RIG looks on course to break $50 this week, but really, I am seeking 52/53 as my first exit by mid January
Posted by Trading Sunset at 15:57:00
Email ThisBlogThis!Share to TwitterShare to FacebookShare to Pinterest

The indexes are battling to hold fractional gains, with sp'1844 holding as the recent high. Metals remain weak, Gold -$7, Silver -2.6%. Oil is weak, -0.8%. The rest of the day will likely see some chop, but with the usual underlying upside bias. 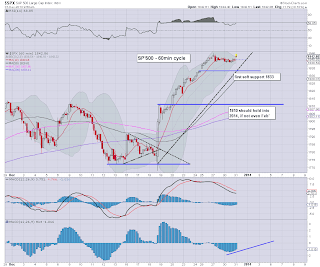 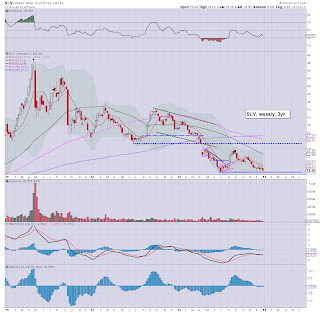 So..some slight upside, but its nothing of significance..but then..neither are we likely to see any sig' downside.

--
*I'm tired..time to cook early lunch..if only to help keep me awake. 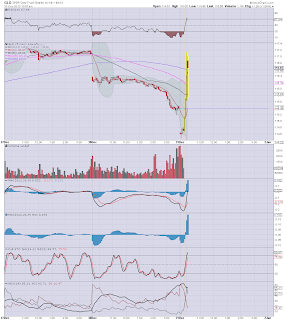 I've no idea what this crazy hyper jump is about..but it sure is whipsawing the metals bears out.

Regardless of the close...underlying pressure should remain upward into the coming weekend.

Shippers picking up..DRYS +4.8%
Posted by Trading Sunset at 14:54:00
Email ThisBlogThis!Share to TwitterShare to FacebookShare to Pinterest

Good morning. Futures are a touch higher, sp +2pts, we're set to open around 1843. Metals are trying to bounce, Gold +$4, but this will be the worse year for the precious metals since the early 80s..pre-Madonna, when men were men..and women were not hanging naked on a wrecking ball. 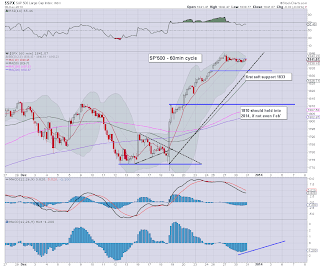 I have very mixed feelings about this year, but I should probably leave that for a post later this evening. Suffice to say....one way or another..we made it through another year. For that alone, we all deserve prizes.
-

*watch for the Chicago PMI number, that is due around 9.45am. If that comes in reasonable, 60/65 range, then market might use it as an excuse to rally into the 1850s..and hold that for a yearly close.
--

I'll probably note it across the day..but sincerely.. good wishes for 2014

yours...
the (disturbingly bullish) permabear doomster

The more I look at the market, the more I'm inclined to think Thurs/Friday are going to be strong upside..even to the 1870s.
Posted by Trading Sunset at 13:06:00
Email ThisBlogThis!Share to TwitterShare to FacebookShare to Pinterest

Another year for the bull maniacs

With just one trading day left of 2013, it is very much a time to reflect upon what remains a deeply twisted and pumped up equity market. The sp' closed 2012 at sp'1426, and looks set for a yearly gain of around 415pts...a disturbingly powerful 29% 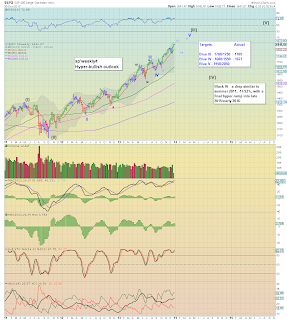 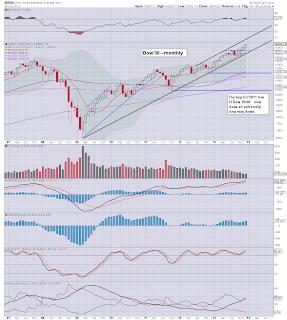 *It is notable that at the Thursday Jan'1st open, the upper bollinger band on the Dow monthly charts will jump into the 17000s.

There is actually a trio of econ-data tomorrow. Most important, the Chicago PMI. Market consensus is seeking 61, which is certainly way above the recessionary threshold of 50.0

*The new QE schedule was issued earlier today, with $40bn of T-bond purchases planned.
There is no sig' QE until next Tuesday.

The following video is something Schiff himself reposted today on his YT channel. It is not even his own video, but from what I read, the original was removed by YT (I guess clown finance TV were not so much upset in terms of copyright, but more so...how they acted, pre-housing/market crash).

*the video is a mere 240x, lousy quality, but hey..what is said, is what matters.

I'm sure most of you have seen it a dozen times, but I think its worth seeing every once in a while, as a reminder of just how stupid, and utterly deluded the mainstream usually are.
--

For many out there, not least those in the chart community, it has been a tough year. There have been doomers touting collapse waves across the entire year..Hell, even I had some moderate hope of a 20% correction until June. Yet, when the market failed to hit the lower weekly bollinger band in June, I threw in the proverbial towel, and have been on the 'hyper-bullish' outlook ever since.

I realise many are still not on that train of thought, and I do understand, but seriously, the trend this year sure hasn't been down, has it?

As many - even the bull maniacs, recognise though, the longer this relentless multi-month up trend continues, the stronger the next down wave will be, both in the depth of decline, but also in terms of price volatility.

I'll hold to my original outlook from the early summer. We have another 3-5 months to wait for an intermediate top to be put in..and then...things should get real interesting.