As I type (6.14pm EST), futures are sp-10... that does make things rather interesting right now. However, in the meantime, lets look at the state of those daily cycles. 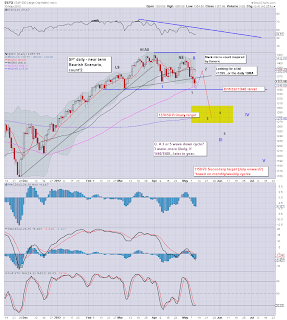 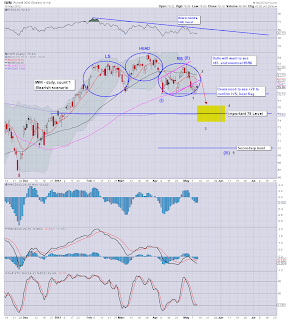 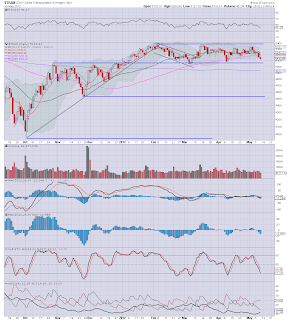 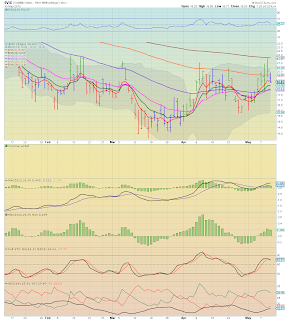 I am holding to the original outlook. A large H/S formation, where sp'1422 marked the top of this post-October 2011 rally. I believe are now in wave'3 - the most destructive wave, and currently in minor 'bounce/recovery' wave2'. This wave should last no longer than 3-5 days.

If we do somehow trade in the 1330s tomorrow morning, that will likely surprise many traders...myself included!

Posted by Trading Sunset at 23:23:00
Email ThisBlogThis!Share to TwitterShare to FacebookShare to Pinterest

A weak close as expected. The closing hour action has likely confirmed the A' wave peak..and thus B' wave is underway. The B' target is a mere few points lower 1354/52. It should not go below 1350, or too many issues then start to come into play. 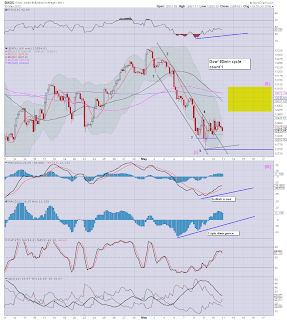 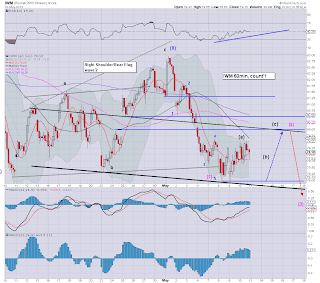 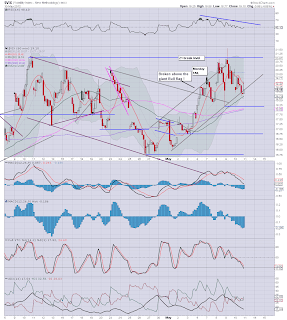 Not too much to say really. It looks like we're still in a giant wave'3 - and we're currently in minor'2 of that wave, which itself is comprised of a likely ABC style of move.The 'fun' -at least from a doomsters point of view, is likely not going to occur until after opex. I'd still guess we peak around 1380 early next week, but it will take maybe 3-5 days to break below 1340...and then the big dow -300/400 pt falls will occur.

As for tomorrow, I guess we will likely form the B wave' low - around sp'1352/54. I suppose we could rally near the Friday close, but considering this weeks market mood, we'll probably close only marginally higher,  around 1356/58.

More on the daily cycles and other things..later this evening.

Posted by Trading Sunset at 21:08:00
Email ThisBlogThis!Share to TwitterShare to FacebookShare to Pinterest

Looking at the 60min cycle, it would appear that the A' wave off yesterdays sp'1343 low is complete. We are now due a very minor B down wave - lasting into late Friday or early Monday. A final C' wave up is then due to complete - most likely by Tuesday or Wednesday. 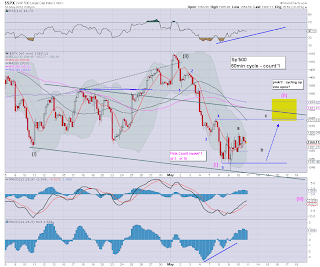 Looks like we'll close under the 10MA, the MACD cycle is clearly maxed out, so there is due to be at least a little weakness into the close - and we've plenty of last hour sell offs lately.

So, its still looking okay for the bears - in terms of the bigger bearish targets of sp'1300/1270.
I am looking to re-short this market around 1375/85, with the cycles as they are today, that is anticipated to be sometime next Tuesday.

Until that time, I'll likely just watch. Is it the weekend yet?

More after the close


Posted by Trading Sunset at 20:00:00
Email ThisBlogThis!Share to TwitterShare to FacebookShare to Pinterest

Whilst the main market crawls upward...lets take a quick look at the bigger picture 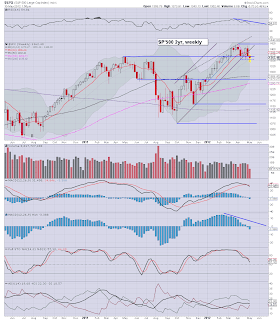 'You shall NOT pass!'

Note the 10MA of 1386, which will be the primary zone of resistance, and it is right in the target zone that I keep highlighting on the 60min cycle. Also the daily 10MA is 1382 (and rolling over)..so the bulls face SEVERE resistance in the 1380/90 zone.

I do not see the market as able to break above this, and if that is the case next week, then the big 1340 level will break..then 1300..and a move to probably at least 1270/50 - and that would likely occur before the end of the month. Also note how the 1270 level is a pretty key level (its also near the daily 200 day MA) - and right now, even the lower bollinger band is also at that level. Whether we can break into the 1100s...that would seem only possible in June/July.

With the VIX falling today..the index option Puts sure are getting cheap again. By the end of May...those same puts may be somewhat more pricey ;)

Its something to consider. In the meantime..I'm just watching.

Posted by Trading Sunset at 19:00:00
Email ThisBlogThis!Share to TwitterShare to FacebookShare to Pinterest

Watching the 15min cycle this past hour, looked like a possible baby H/S formation on IWM..but it just busted upward. 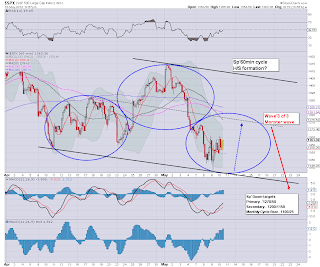 More later!
Posted by Trading Sunset at 17:58:00
Email ThisBlogThis!Share to TwitterShare to FacebookShare to Pinterest

12pm update - I should probably turn the screen off

Market is indeed an annoying chop fest right now. Clearly a few bears were shorting earlier...only soon to get stopped out on another micro rally. Similarly, a set of weak bullish hands were kicked early on. VIX is weak, it looks like yesterdays brief break above 21..was a mere tease for the bears. Next VIX target would be somewhere in the 17s. 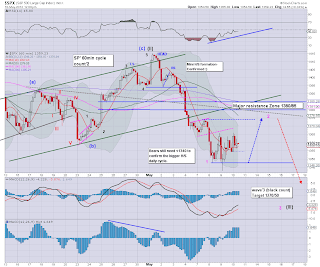 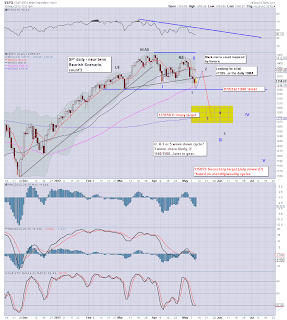 Daily cycles are levelling out on the MACD cycle. We're pretty low, its not a good place for any new short positions.
--
It was very tempting to go long earlier, but prices just did not fall enough to merit a more reasonably entry level. I would definitely look to go long around sp'1353/50 near the end of today, but I just don't think we'll get that low.
--
Time for lunch..back later
Posted by Trading Sunset at 17:03:00
Email ThisBlogThis!Share to TwitterShare to FacebookShare to Pinterest

As noted earlier, it looks like we'll see a chopfest for the next 3-5 days - forming a RS. So, probably best for most to just sit this nonsense out, let the algo-bots swing it from 1350-1380 until middle of next week. 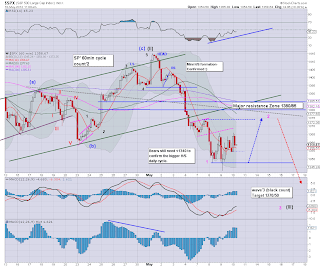 Market is cycling lower on the 15min..I do NOT expect new lows today. 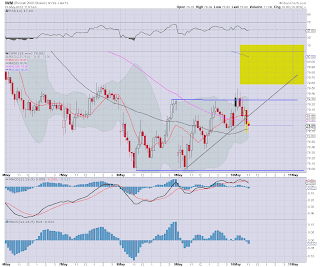 I remain on the sidelines...prices are too high to go long, and too low to go short. I certainly still looking at the possibility of a majorly destructive wave'3...which 'should' get going after opex.

More later.
Posted by Trading Sunset at 16:02:00
Email ThisBlogThis!Share to TwitterShare to FacebookShare to Pinterest

10am update - the RS is forming

Neither am I shorting right now...the prices are not ideal..and besides..look at the 60min cycle..we are cruising higher. Only a maniac would go long at this level...and it'd take an even crazier one to short this hour. 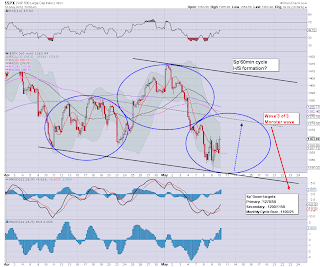 I suppose a short around 1373/77 would be acceptable...if both the 15/60min cycles are maxed out, but that seems unlikely today. Anyway, I doubt we can hit into the 1370s today.

More later...
Posted by Trading Sunset at 15:01:00
Email ThisBlogThis!Share to TwitterShare to FacebookShare to Pinterest

Good morning. Marginal overnight weakness in the market has slowly turned around, its looking like we'll open +0.5% across the main indexes. Weekly jobless claims came in at  367k vs 366k expected. 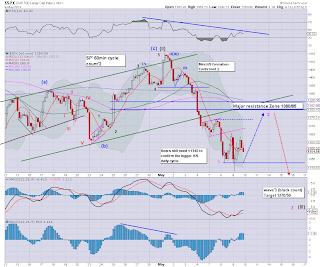 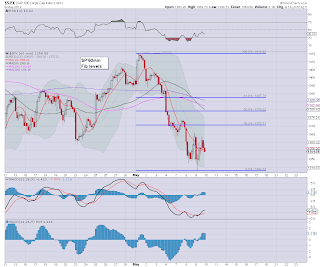 If the market does open up, I'm not chasing at sp'1360, as upside could be very limited today. We could yet go red after an early up move. I'd be more comfortable to sit back in cash across the weekend, and re-short at 1380. So, unless we cycle a little lower to around sp'1352/50 today...I won't be hitting any buttons.

Oh, and we have Bernanke speaking at 9.30am. Doubtless the clown channel hosts will be looking for some words to to use as proof that 'everything is gonna be okay..Benny will help some more...real soon'.

Good wishes for Thursday trading!
Posted by Trading Sunset at 13:30:00
Email ThisBlogThis!Share to TwitterShare to FacebookShare to Pinterest

With the market having another red close, we're now getting awfully close to that critical sp'1340 support level. VIX still remains relatively low, but it did break 21 today, and a quick move to 24 is viable at any point.

I wanted to again highlight an issue that I am keeping in mind for the coming few weeks. Every market cycle is unique, but cycles often repeat in the same style. Lets consider the last major collapse wave, from last July/August 2011. 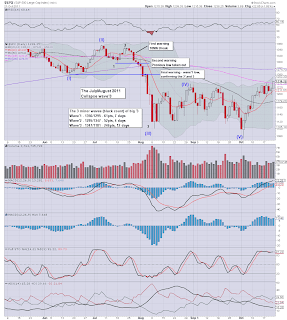 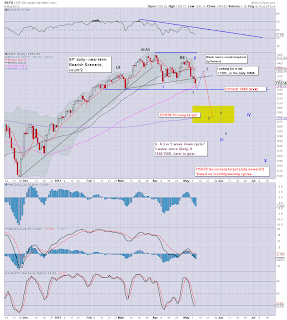 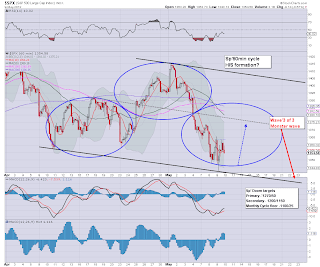 If correct, it would suggest the next down cycle (minor wave'2 of big'3) would begin no later than opex next Friday, quite possibly as early as next Tue/Wed. Remember that 'minor wave'2 of 3 - in last years wave resulted in a 246pt fall in 12 trading sessions.

Its been a long day, I've no positions, so I will start afresh Thursday morning.

The current plan is to go long at the base of the next 15/60min cycle, probably around 10.30/11am. So long as the market does not break sp'1340 I would be pretty comfortable taking a new position - especially once Bernanke is out of the way again (he talks at 9.30am).

Goodnight from a rainy London
Posted by Trading Sunset at 03:00:00
Email ThisBlogThis!Share to TwitterShare to FacebookShare to Pinterest

Today was tricky, and without question a little scary for those holding overnight as we again gapped lower, and kept on falling until that magical 11am hour - when we do often tend to level out and start cycling back upward. Yet, the bears saw those early morning losses turn completely around to become green indexes at one point.

Overall, the big H/S pattern on the daily cycle is still looking intact. A retracement/back test of the bear flag (pink), up to around the daily 10MA - now sp'1385 (and rolling over), would be very natural. So, we could still easily rally 25pts, even a possibly minor (and brief) overshoot to around 1390. For the big 'serious money', short-stops would be around 1395 - where the old support level was. 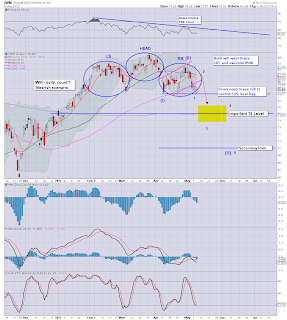 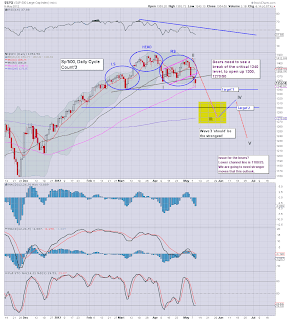 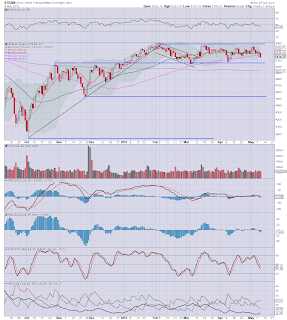 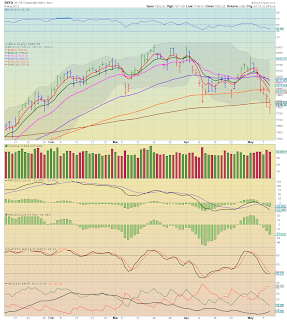 A few issues to note. Despite the morning gap lower, not all indexes broke new lows. IWM held the line, and SP' really only broke 4pts beneath the Tuesday low 1347. The H/S formation on the  hourly chart is sloping lower...so even though it was a new low..it still held within the broad area. Even a further new low of 1342/40 early Thursday morning would be acceptable within the bigger picture.

The transports remain in a tight range. As I keep saying, whichever direction this index eventually does break, that'll be one of the biggest sell - or buy' triggers of this summer.

The NYSE Composite 'master index' is still very bearish on the rainbow 'Elder Impulse' chart, there is no sign of a turn back up yet. From a MACD (green bar histogram) cycle perspective though, the NYSE is pretty low, we can't be more than 2-3 days from a clear turn back upward.
-

Probably one final posting to come this evening...not sure on what yet.
Posted by Trading Sunset at 00:00:00
Email ThisBlogThis!Share to TwitterShare to FacebookShare to Pinterest
Newer Posts Older Posts Home
Subscribe to: Posts (Atom)