With the main indexes melting higher into the Friday close, the VIX naturally melted lower, closing -4.1% @ 12.59. Across the week, the VIX lost 2%, after a brief spike to 13.53. The market remains totally complacent. 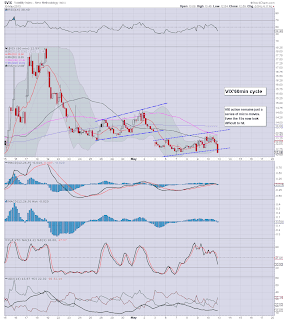 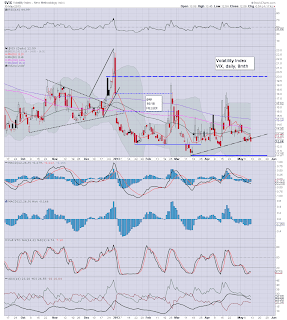 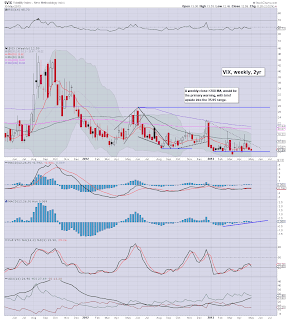 Suffice to say, the VIX closed as expected, and indeed, the weeks price action was also as expected.

We saw just a tiny spike into the mid 13s on Thursday - due to that 'QE tapering' rumour, but that was all the bears got.

As I noted earlier in the week, the question has to be asked, will this year even see VIX in the 20s? Despite my index outlook into the late summer, I do think volatility will return in the autumn, and possibly with a vengeance.

a little more later, on the indexes
Posted by Trading Sunset at 23:00:00
Email ThisBlogThis!Share to TwitterShare to FacebookShare to Pinterest

The main indexes all closed a little higher, lead by the R2K which saw gains of around 0.8% The transports closed in the mid 6300s, which was a weekly gain of around 2.4%. As expected, the VIX naturally melted lower into the close, and remains in the very complacent 12s. 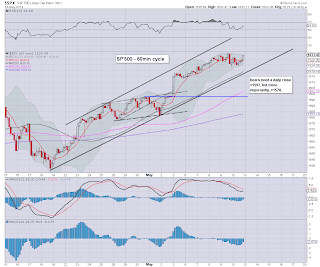 So, another week where the bears were just mind numbed with micro algo-bot melt. As I continue to fear, this sort of nonsense could continue for some weeks, if not a few months.
--

Thank you to all those who commented this week, even those I vehemently disagree with. The irony is not lost on me, that I'm now on the bull train.

Have a good weekend.
--
*next main posting, late Saturday, probably on the world monthly index charts.
Posted by Trading Sunset at 21:01:00
Email ThisBlogThis!Share to TwitterShare to FacebookShare to Pinterest

3pm update - another week to the upside

Market is holding together very well, with most indexes seeing moderate gains. The Rus'2000 is leading the way with gains of 0.8%, and is now within easy striking distance of the ultimate psy' level of 1000. VIX is lower, and will surely just melt lower into the close. 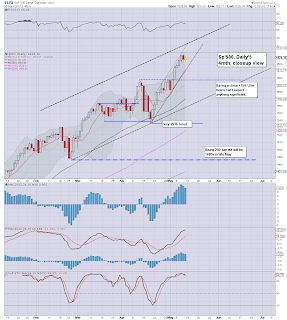 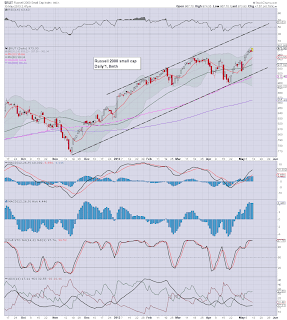 No surprises today..nor across the week.

Next week will probably be a bit more choppy/active, not least since its opex. However, with two big POMO days, bears can't expect anything <sp'1600, if even 1620.
--

*I exited USO a little earlier, after a surprising mini hyper ramp. Good gains, and although I expect higher levels next week, I'm content to exit for the weekend.

I will look to re-long USO early Monday. Target remains the 35s..if not 40s by late summer.
--

back at the close.
Posted by Trading Sunset at 19:48:00
Email ThisBlogThis!Share to TwitterShare to FacebookShare to Pinterest

2pm update - gains for the weekend

Market is holding moderate gains on most indexes, with the VIX now slightly red. Precious metals and Oil continue to increasingly look like they have floored - at least in the immediate term. Transports is set to close the week around 2 - 2.5% higher, other indexes, around 1% 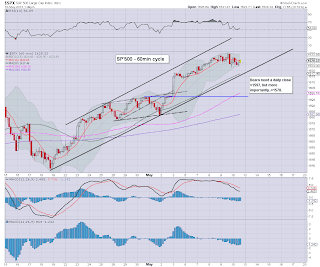 Very quiet afternoon, which of course are the conditions in which the algo-bots thrive...to melt it all higher.

*no QE-pomo next Monday, but there are big ones on Tuesday and Friday (opex). Bears beware!

As ever, full details : POMO schedule
--

VIX daily looks just another bear flag is setting up... 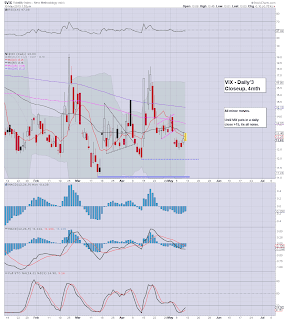 Nothing good there for the bears for next week.


UPDATE 2.16pm.. Oil starting to rip to the upside, and is now well above my 'best hope' for the close. Very impressed, and the 35s now look viable next Tuesday. 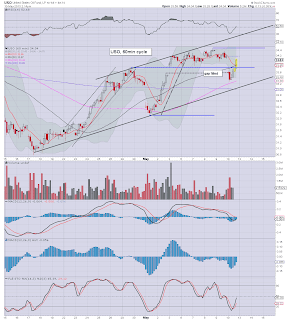 Market is very quiet, and the hourly index charts look very bullish for early next week. It looks like the bulls will get a close above trend support - currently around sp'1617/18. The metals and Oil are offering initial signs of a turn. VIX is still a touch higher, but a Friday red close looks very likely. 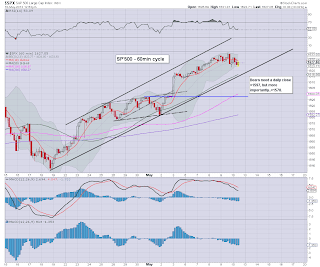 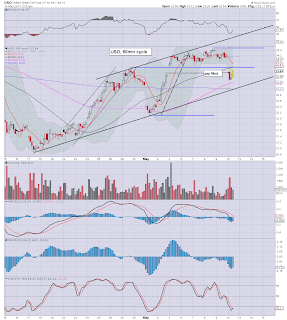 There remains no reason why we won't close the week at least around these levels, and that will make for some very bullish weekly charts.

*I am long Oil (via USO), and am very content to hold across the weekend, and probably will trade in/out, on the long side for the next months.

The main indexes are mixed, although the default pressure remains to the upside. Precious metals and Oil look like they could be floored, although there will be no clarity on that until early next week. USD is still building gains, now +0.64%. VIX is +1% 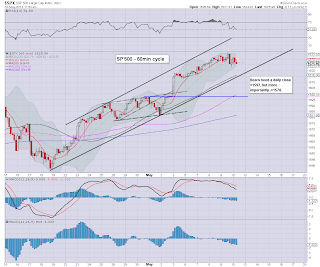 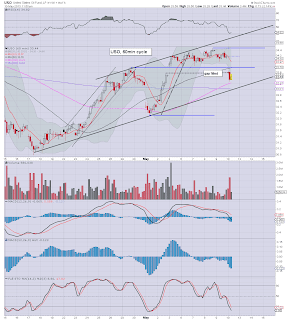 With the Bernanke out of the way, market can get back to low volume melt mode.

The only concern for those on the long side should be the rising USD, although the weekly/monthly charts are currently looking vulnerable.
---

*I didn't quite nail the floor in USO earlier, but my entry was actually a little under my (gap fill) target of the 33.60s. Now..I wait.

UPDATE 12.34pm.. Oil starting to show a good turn now.  USO back in the 33.70s. A weekly close in the 34s would be bonus.
Posted by Trading Sunset at 16:55:00
Email ThisBlogThis!Share to TwitterShare to FacebookShare to Pinterest

The market is seeing some renewed weakness, its only minor so far though, and the bulls can be comfortable with any weekly close >sp'1620. However, the precious metals and Oil are sharply lower, no doubt being pressured by a USD that is again building gains, +0.5% 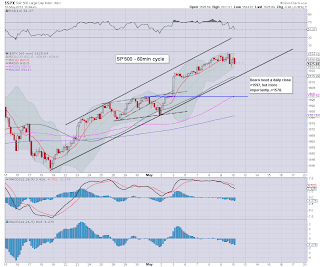 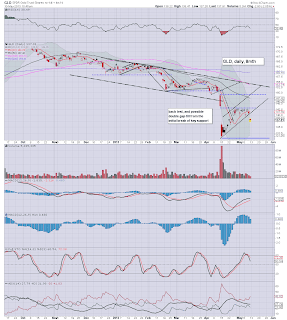 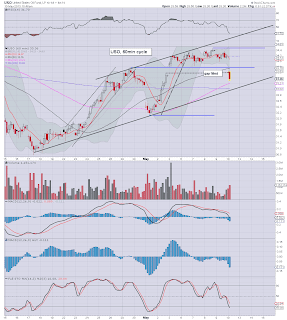 Gold/Silver have both broken below their bear flags. The big issue now is whether we'll see a slightly higher low, or break the collapse low, and perhaps go a lot lower. Considering the wider QE fuelled market, its starting to look like we might just put in a slightly higher low.

Best guess, market holds within the broader up trend, with a close >1620.
--
*I am long Oil from earlier this morning, and will hold into next week.
--

11.05am metals and oil starting to show a more secure turn/levelling. Maybe 11am was again the key time.

Transports and R2K both green, and the weekly charts look very bullish into June..and possibly all the way to July/August.
Posted by Trading Sunset at 15:52:00
Email ThisBlogThis!Share to TwitterShare to FacebookShare to Pinterest

The market has opened a touch higher, with the sp' trying to break back into those 1630s again. The Bernanke is speaking, but generally, its just the usual Fed speak. Precious metals and Oil are sharply lower. USD is holding moderate gains of 0.3% 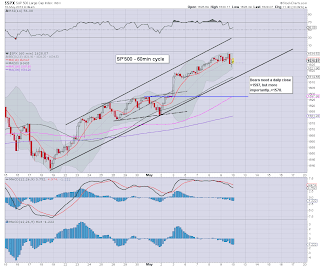 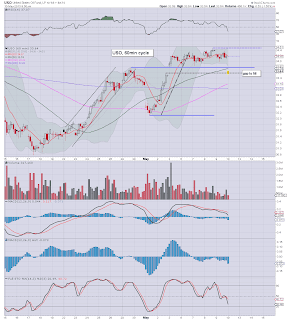 10.30am Indexes a little higher, but metals and oil still very weak.

*I remain reasonably content with my new Oil long position, and will hold into next week.
Posted by Trading Sunset at 14:52:00
Email ThisBlogThis!Share to TwitterShare to FacebookShare to Pinterest 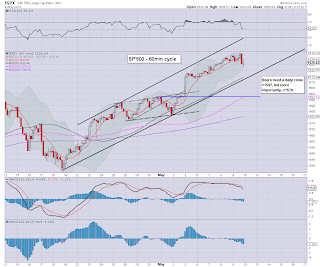 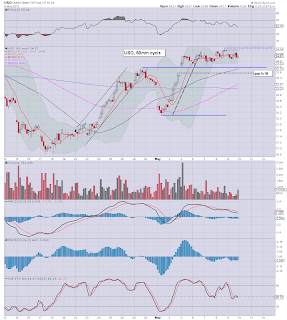 So, we do have the metals and Oil showing some interesting moves.

On balance, I'd have to guess we close higher today, although yes, the daily MACD cycle is now ticking lower for the indexes.
--

*Oil will open in my USO target gap-zone, and I am seriously consideing going long.this morning.

back at 10am
Posted by Trading Sunset at 13:43:00
Email ThisBlogThis!Share to TwitterShare to FacebookShare to Pinterest

One closing decline does not break a trend

The main indexes closed lower for the first time in a week. Yet, the daily declines were only minor. There are multiple levels of support, and it looks very unlikely that the bears are going to be able to break under the recent key low of sp'1582. So far...nothing has changed. 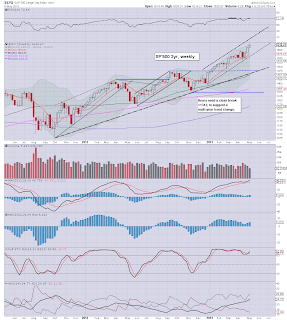 So, a down day...finally, but really, it wasn't anything of note, and does nothing to damage the weekly, never mind the bigger monthly upward trend. It wouldn't surprise me if the market won't even trade below 1600/1597 in this down cycle, if thats even what it is.

Todays close of 1626 still offers the possibility of a Friday/weekly close in the 1640s which would clearly annoy those seeking a major turn to the downside.

I realise a fair few are seeking a downside turn after May 20'th - for all sorts of different reasons. As things are, I just can't see it. As ever though, I am trying to keep an open mind. If we do somehow start trading <1570, then yes, things have perhaps...changed.

The Bernanke speaks in the morning, as does another Fed bank president (Kansas) - Esther George. No doubt a few in market land will be listening to what both have to say on the current QE program.

On balance, we'll probably close higher tomorrow. The bulls should be very content with any weekly close >sp'1620. As it is, I remain content on the sidelines.

The main indexes all closed moderately lower, although the Transports saw more significant declines of 1.1%. Mid-term trend remains to the upside, but there is a small possibility of a very minor retracement. First soft support is the rising daily 10MA of sp'1607. 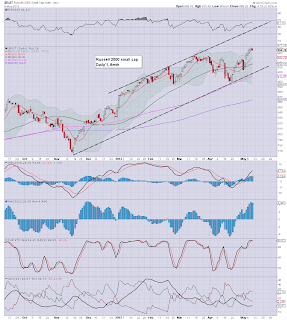 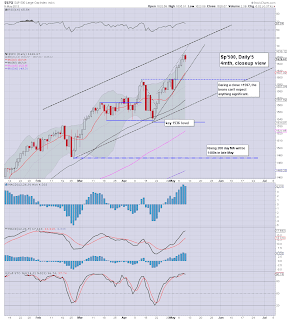 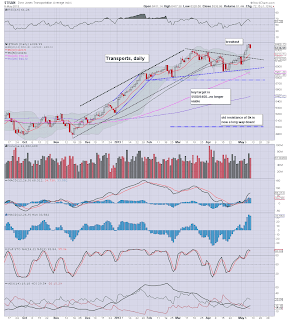 So, the 5 day bullish streak comes to an end.

Underlying MACD (blue bar histogram) cycle ticked lower for all the indexes, and thus it could be labelled as day'1 down.

However, baring a move under sp'1597, I can't seriously consider that a major turn is now underway. After all, the QE-pomo is still continuing.