The US indexes rallied for a fourth consecutive week, lead once again by the Transports and the Rus'2000. With the SP'500 putting in a weekly close above the big psy' level of 1500, the bulls remain firmly in control. Even a minor retracement down to the sp'1440s would do no damage to the bullish trend.

Lets take a good look at the six main indexes that I regularly highlight.... 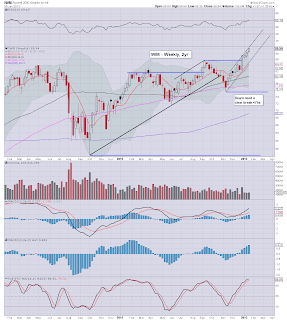 The R2K remains in 'historic' territory, and gained 1.5% across the week. The trend is strong, and there is no sign of a turn/levelling out phase. Even a 1-2 week decline down to the 87s would do no damage to the current trend.

Underlying MACD (blue bar histogram) cycle is extremely strong now. Even if the bears wrestled total control of the market, it'll take around THREE months just to get momentum back to flat. 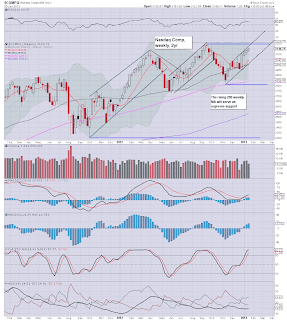 The Nasdaq still managed minor gains of 0.5% this week, despite its largest constituent - AAPL, declining by 12% this week.

Clearly, tech is the big lagged amongst the main indexes, but is now very close to taking out the mid-Sept 2012 highs. Underlying momentum continues to build, and there is nothing bearish here. 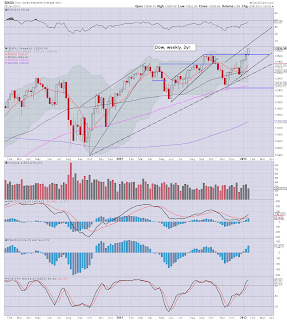 The mighty Dow '30 gained a significant 1.8% this week, and is now just 303pts shy of the Oct'2007 high. The Dow' could comfortably pull lower to the 13300s in early February, and that would do no damage to the primary upward trend. 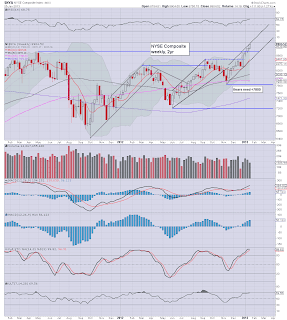 The master index is comfortably holding above the summer 2011 highs, and is showing no sign of weakness. Underlying momentum is still building. The Oct'2007 high was 10387. So, we're still a good 15% or so away from the property bubble highs. 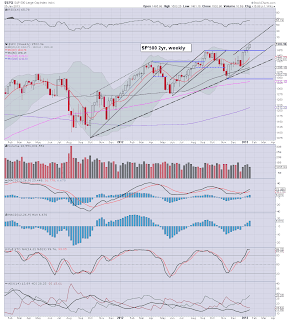 The sp' broke above the important 1500 level this week, and the weekly close was something of a bonus to the bulls. There will very likely be strong resistance around 1510/20 in the coming week, and a pull back to the 1450/40 zone still seems viable.

Underlying momentum is still building, and there is currently no sign of a levelling phase. A challenge of the Oct'2007 high of 1576 seems very viable in late March/April. 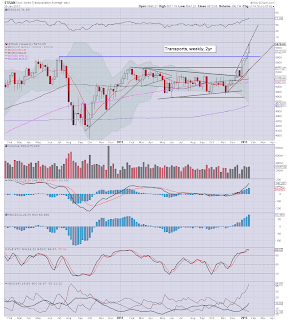 The tranny was the first to warn of a bullish breakout in mid-December, and it appears to now be in an accelerated upward phase. Whether its now in a sub-wave'3 is impossible to know, and largely pointless to guess.

What is clear, the transports is fiercely strong. The breakout from the year long plateau in the low 5000s is now a very long way down. The only issue is 'where does this nonsense stop?'.

Trans @ 6k seems a given sometime this spring. The only issue on my mind, is whether the Trans can continue a hyper ramp across 2013. to close the year in the 7000s..or even 8000s. If its the latter, then you'd have to think the sp'1700s is not such 'crazy talk' after all

It was certainly a week where many bears were again throwing in the proverbial towel, and some, are even flipping to a new bullish outlook. Indeed, such signs are often subtle precursors/contrarian signals, that a down cycle is due.

The early warning the transports gave in December has indeed panned out. Just how much the transports - along with the broader market, can yet battle higher this spring, will now be the central issue across the next few months.

I still see plenty of doomer chat out there, even of 'dow 8000s this summer'. Yet, how could that possibly happen? Other than a giant flock of black swans, I just don't see it coming. We know the US debt ceiling will be raised, whether by a house vote, or by exec' order. We also know the Bernanke will continue to throw 45bn of POMO money at the primary dealers..and much of that will 'somehow' funnel its way into the US markets.


Take a look at the following rainbow monthly chart... 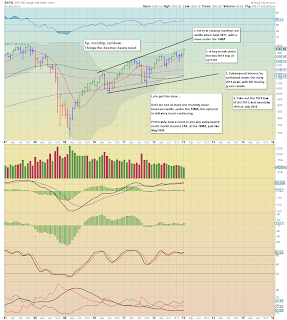 I think the above chart highlights very well the bizarrely strong rally since autumn 2011. Even more so, the fact that the bears haven't seen a decisive red candle since Sept'2011. Clearly, we're going to get stuck at some point, but we could easily be trading in the sp'1600s this late spring/early summer. At which point there really won't be any bearish 'patterns'..nor those stupid 'wedges' for anyone to cling to.

Even a minor retracement wave to the November low of sp'1343 now looks a considerable way lower, and I certainly don't expect that any time soon. The bears have a very long, and difficult trading year ahead.

The coming week is going to be a massive one. There is a veritable truck load of key econ-data next week - in addition to more Q4 earnings of course.

We have something EVERY day for the economists out there. Even Monday has Durable Goods Orders which will be interesting to see.

On Wednesday we have the first reading for GDP Q4. Consensus is for growth of 1.0%, which frankly IS below stall speed. Arguably, any number <0.5% would probably be the excuse for the Market to see the first sharp sell off since late December.

There is also an FOMC meeting, with the obvious announcement of 'no change in policy' on Wednesday. With the jobs data to close the week - at the start of a new month no less, its going to be a very interesting week to watch.

Will Mr Market use any econ-weakness as an excuse for a swift sell down to the sp'1450/40 level? I think there is a very high chance of it, and if so, it'd make for a reasonable exit for those still in busted-up short positions, and a likely good level to go long.
--

As ever, your comments are always welcome.

Good wishes for the trading week ahead.

UPDATE - two videos I think are worth seeing, one of which was kindly highlighted by one of my readers.

First, a rare 'free' appearance by Chartist Ron Walker. Walker is someone I've followed, and supported for a few years now, although he sadly 'went dark' over a  year ago..behind a paywall.

I think it is particularly interesting how he is looking for a market reaction next week, from the GDP data. I agree with the near term VIX outlook (I myself remain long VIX from last Friday), but I just can't see VIX 20+ for a few months. I'd bet we get stuck around VIX 17/18..with sp'1450/40.

The second video is from none other than Mr Permabull - Oscar Carboni. Maybe he'd not like me calling him that, but too many times I've seen him dismiss the economic fundamentals, and tout the Fed as the saviour. I can't support that.

Regardless, he did recently correctly call the AAPL top, and now he is seeking AAPL <$300, which is obviously a very bold call.


My original 'doomer' outlook for AAPL was for $300 (late 2013) - and that was only 'if' the market got trashed this year. With the market going up, I thought my recent upgrade to $400 was still overly bearish. Yet, here we have Oscar touting indexes UP...whilst AAPL to keep falling - across 'some months', I think its fair to assume.

Anyway... maybe some of you will enjoy the videos... I will return on Monday.
Posted by Trading Sunset at 18:53:00
Email ThisBlogThis!Share to TwitterShare to FacebookShare to Pinterest
Newer Posts Older Posts Home
Subscribe to: Posts (Atom)