VIX rapidly cools into the weekend

With equities climbing across the day, the VIX was naturally in cooling mode, settling -12.7% @ 12.70. Near term outlook is moderately mixed, with viable equity weakness across Mon/Tue, but with the broader upward trend set to continue across May... and probably at least into the next FOMC of mid June. 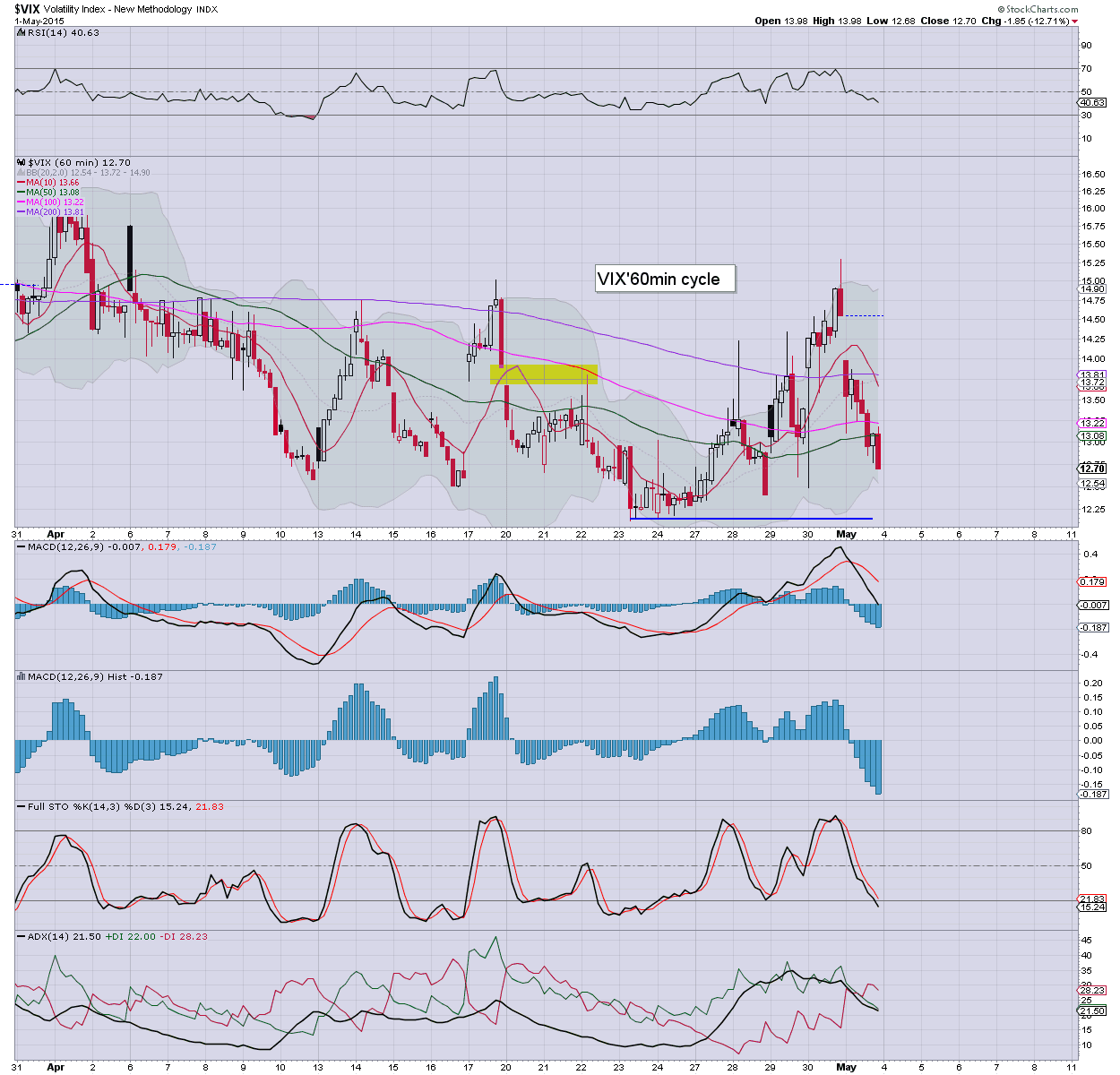 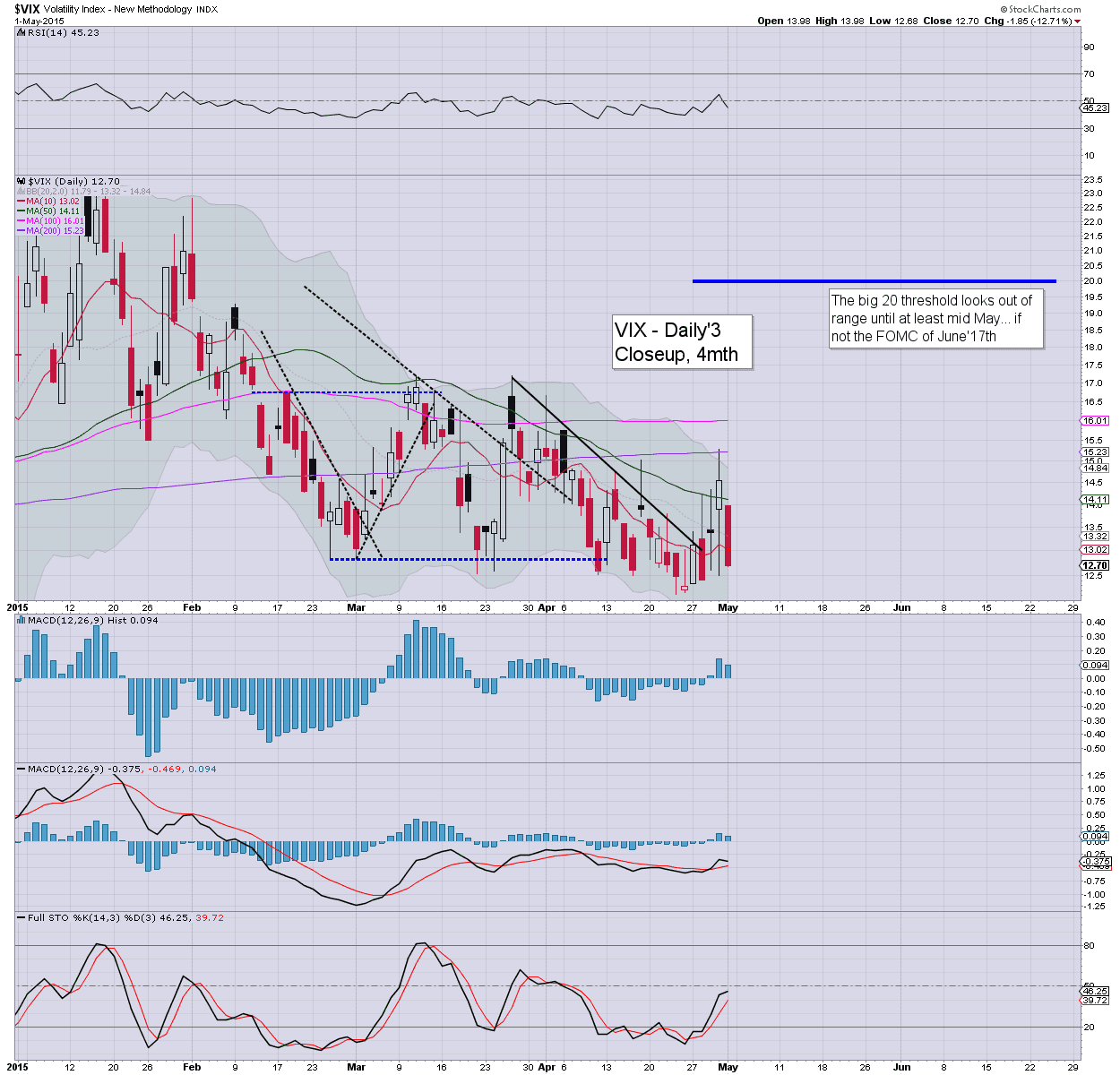 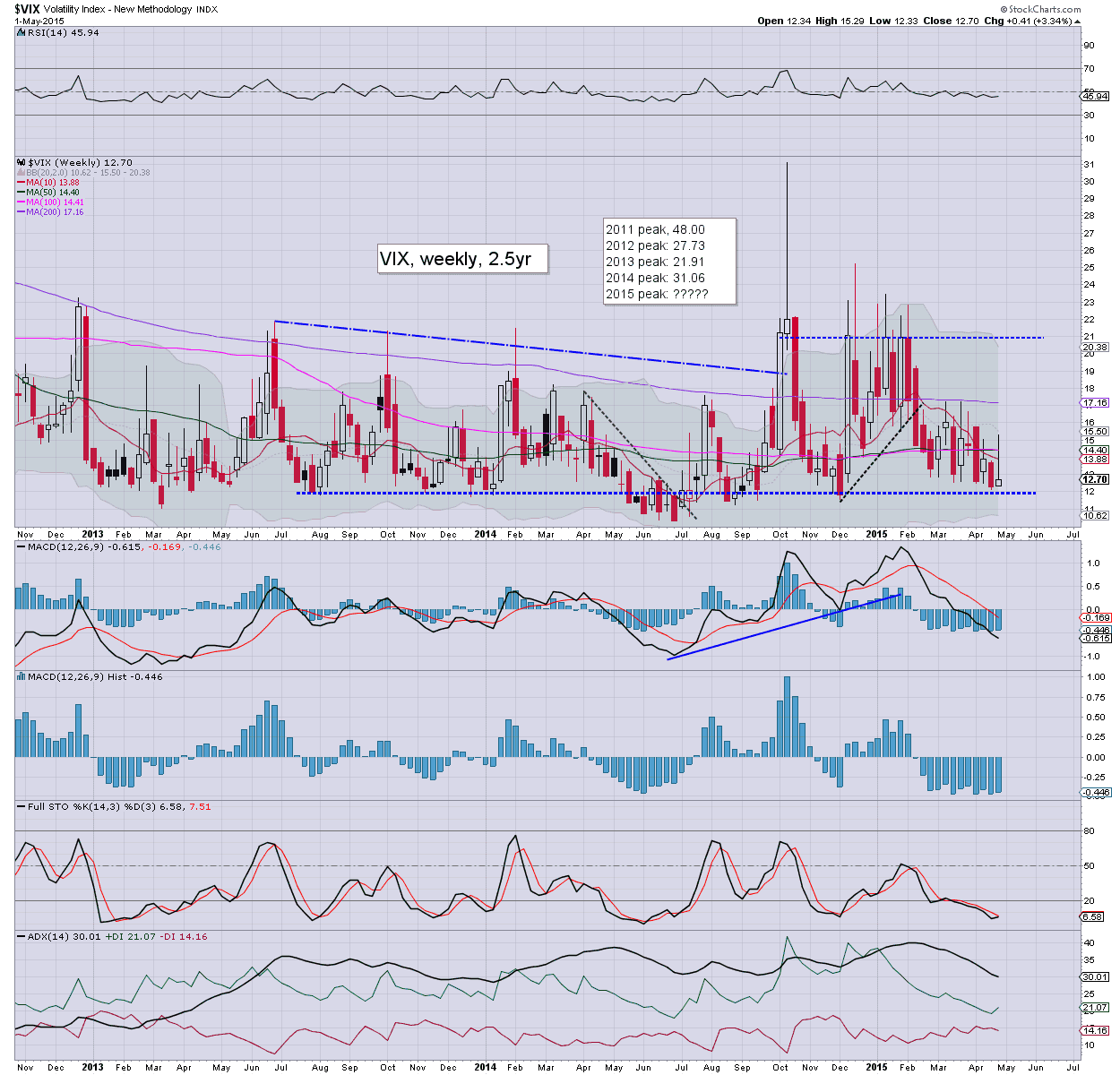 *a net weekly gain of 3.3%, but with a bearish spiky top candle, it is indicative that equity bears are still unable to sustain downward price pressure.
--

US equities closed significantly higher, sp +22pts @ 2108. The two leaders - Trans/R2K, settled higher by 1.7% and 0.7% respectively. Near term outlook still offers weakness next Mon/Tuesday, but the broader trend remains bullish.. at least into June. A weaker USD and higher Oil prices will no doubt help. 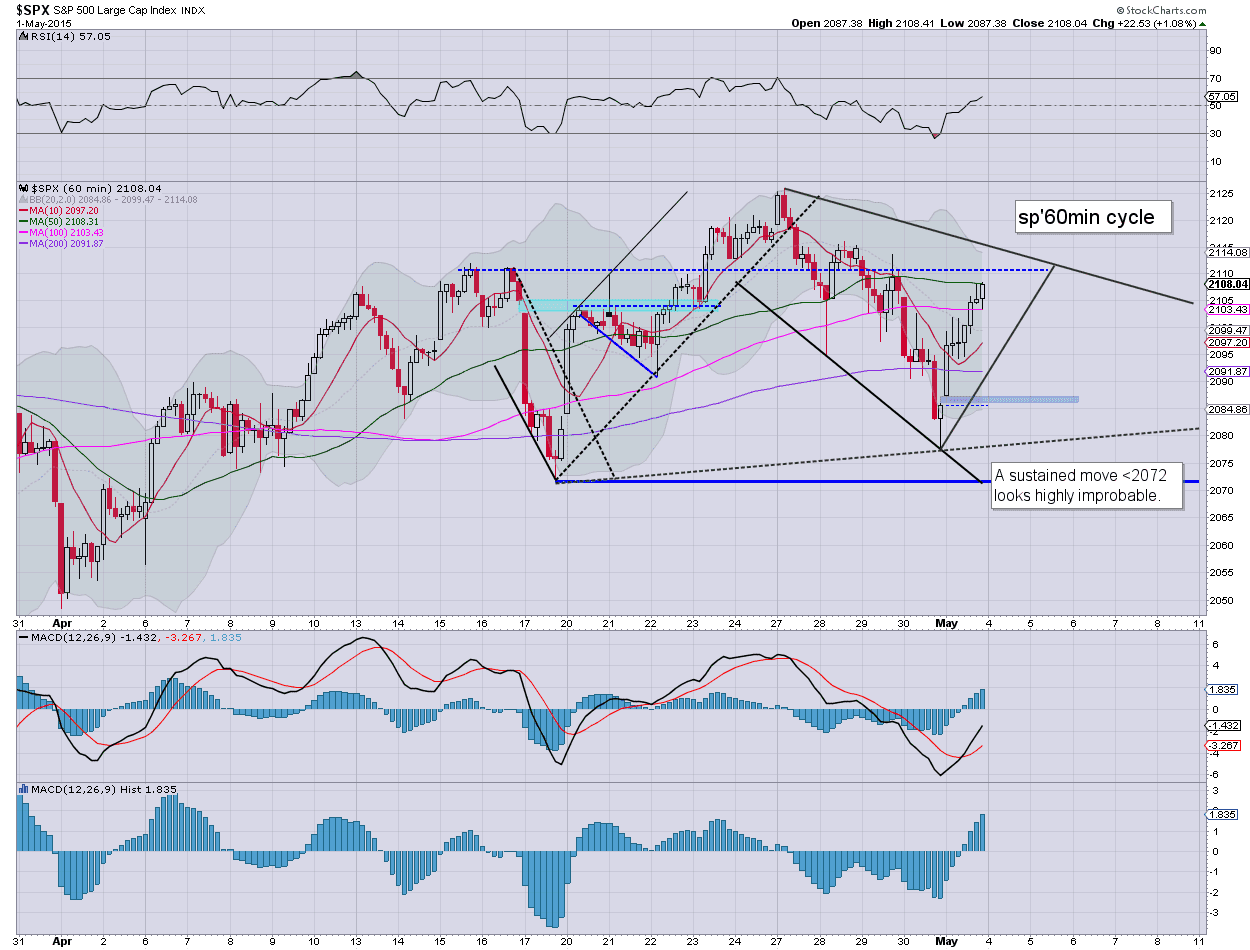 .. and another week comes to a close.

Without question, the momo chasers had a particularly rough week... YELP, LNKD, and of course... TWTR. By some minor miracle.. I had the sense to avoid the latter... but I had been tempted.

Thanks to those who said hello this week... it makes all the difference!

Have a good weekend everyone.
--

*the usual bits and pieces across the evening.. to wrap up the week
Posted by Trading Sunset at 21:01:00
Email ThisBlogThis!Share to TwitterShare to FacebookShare to Pinterest

US equities look set for significant net daily gains, but will still be net lower across the week (sp -0.5%). Metals remain broadly weak, Gold -$8, with SIlver -0.3% . Oil is -0.9%, and set for further weakness in the first half of next week. 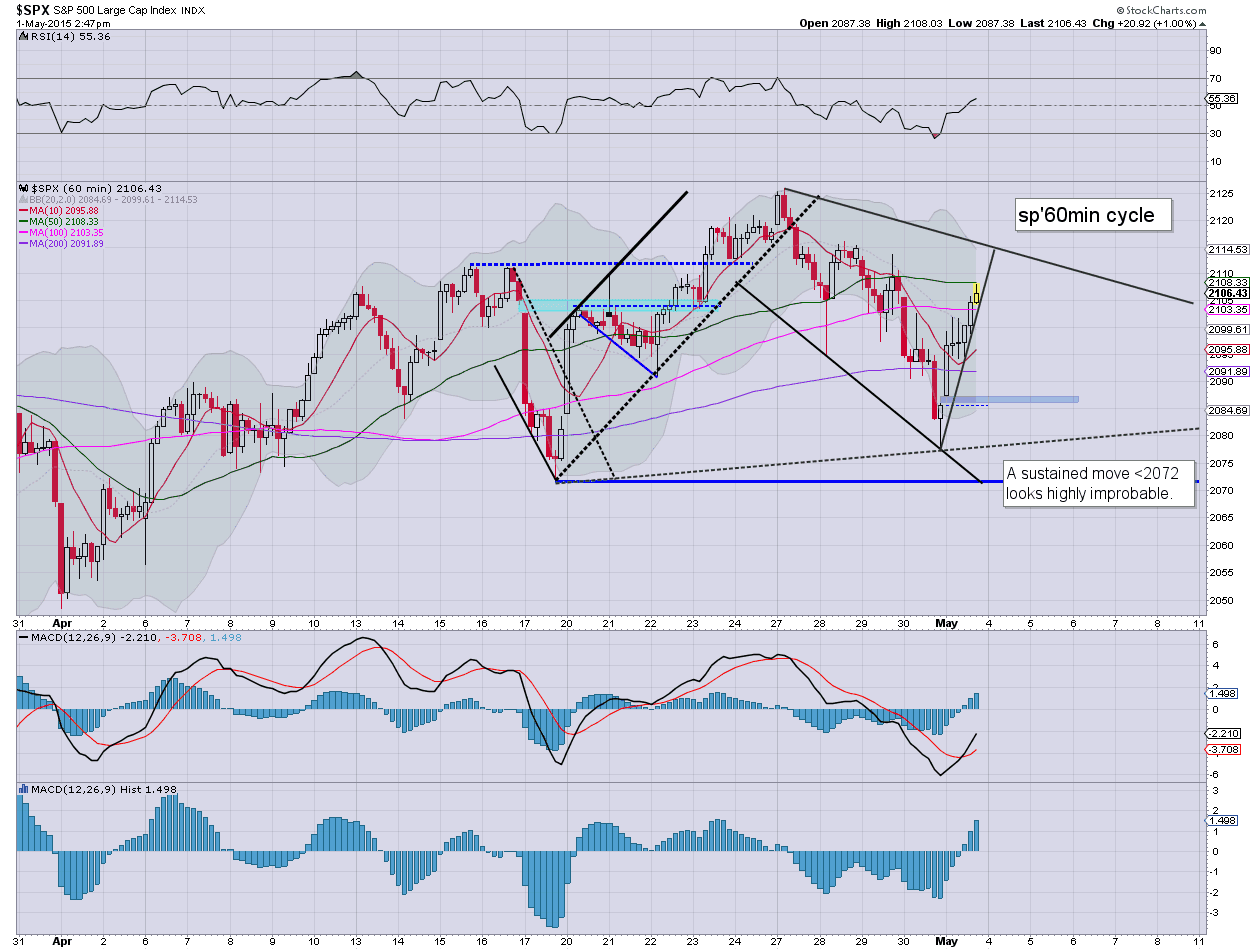 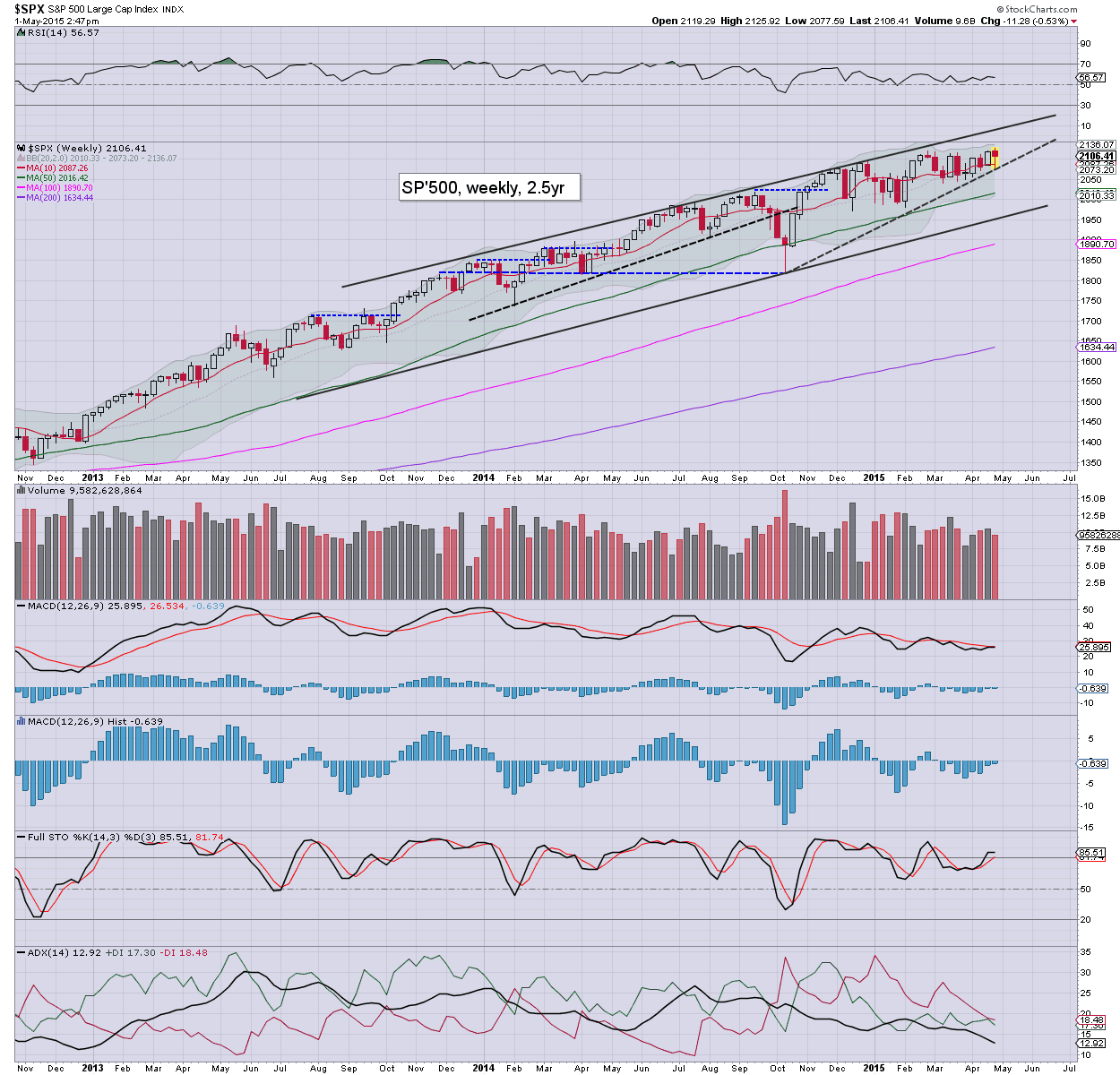 Well, its the closing hour of what has been a pretty interesting week.

notable strength: airlines, DAL/UAL, both higher by 3%, as oil prices are cooling
--

*I continue to have eyes on Oil, the Euro, and the BABA... and will strongly consider those next week.

--
back at the close... to wrap up the week
Posted by Trading Sunset at 19:49:00
Email ThisBlogThis!Share to TwitterShare to FacebookShare to Pinterest

US equities have seen a micro snap higher, as the sp'2102 high is taken out. Some weakness into the weekly close still looks due, but clearly, a net daily gain is now due for most indexes. Metals remain weak, Gold -$7. Oil is -1.6%  and looks set for further weakness early next week. 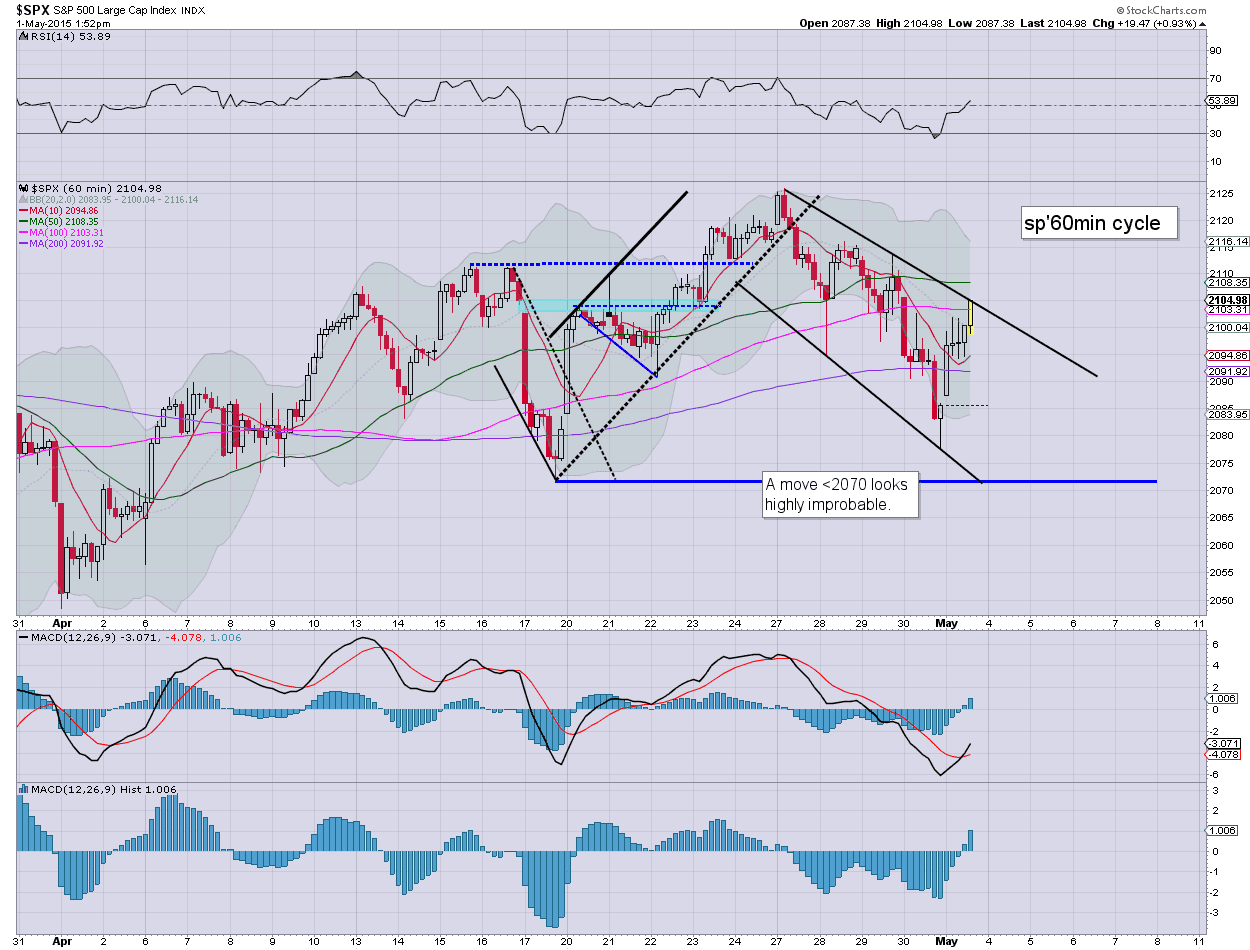 A short-stop cascade is clearly underway as the 2102 high is taken out...

With the USD and Oil as they are... I'm still inclined to another wave lower in equities next week... but I ain't getting involved, I've eyes on other things! 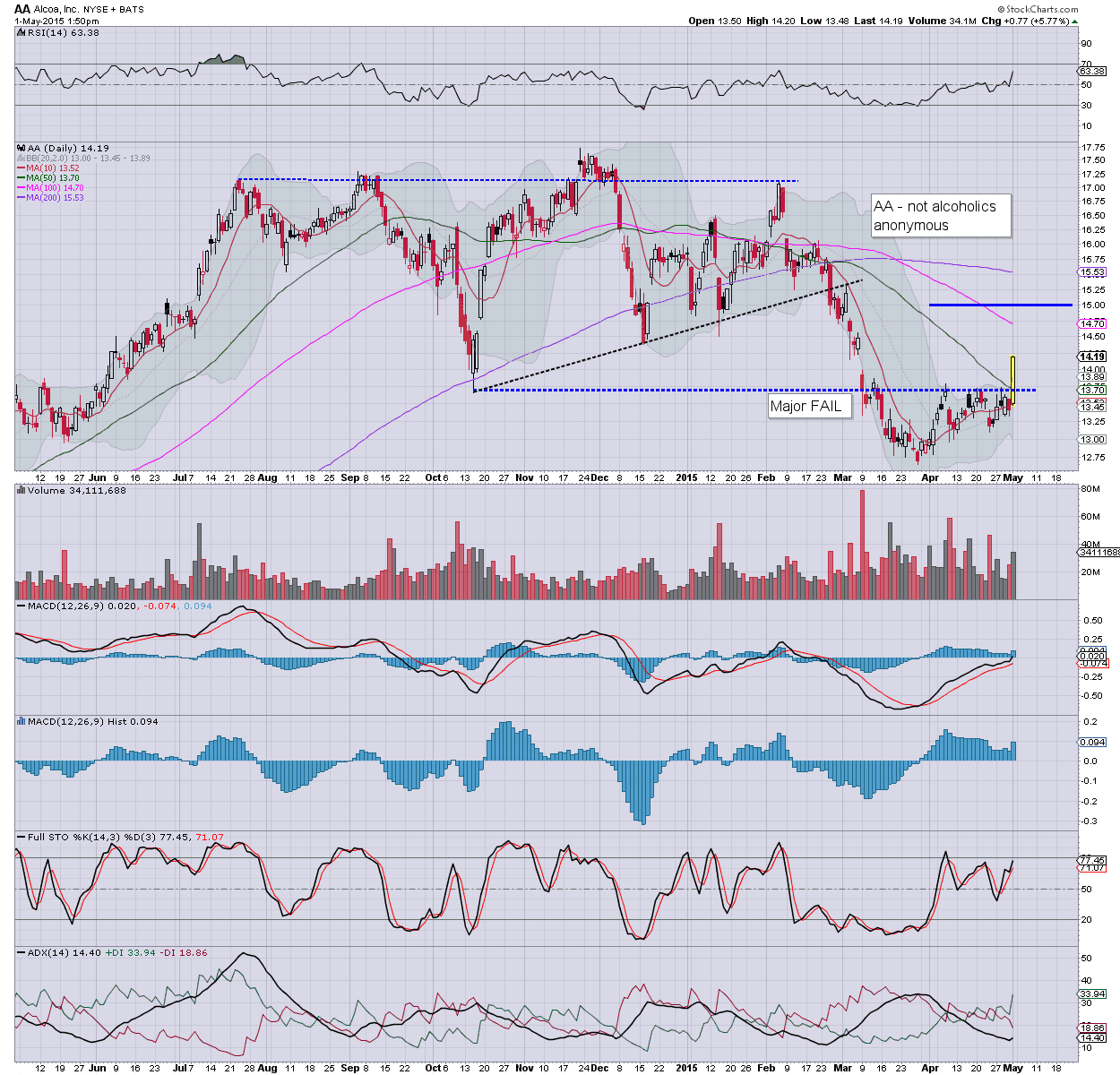 A clear break above the old broken floor... and with the strong daily gain... a move to next resistance of $15 looks due. I'm still broadly bearish on AA though, the bigger monthly cycle is still suggestive of $10/9.. although any break >$15 would argue against that kind of move this summer.
Posted by Trading Sunset at 18:54:00
Email ThisBlogThis!Share to TwitterShare to FacebookShare to Pinterest

US equities remain holding moderate gains, but are still clearly stuck under the Thursday bounce high of sp'2102. Renewed weakness into the weekly close would bode for a test of the 2072 low next Mon/Tuesday. Metals remain weak, Gold -$10. Oil is now significantly lower, -1.9%. as the USD +0.8% 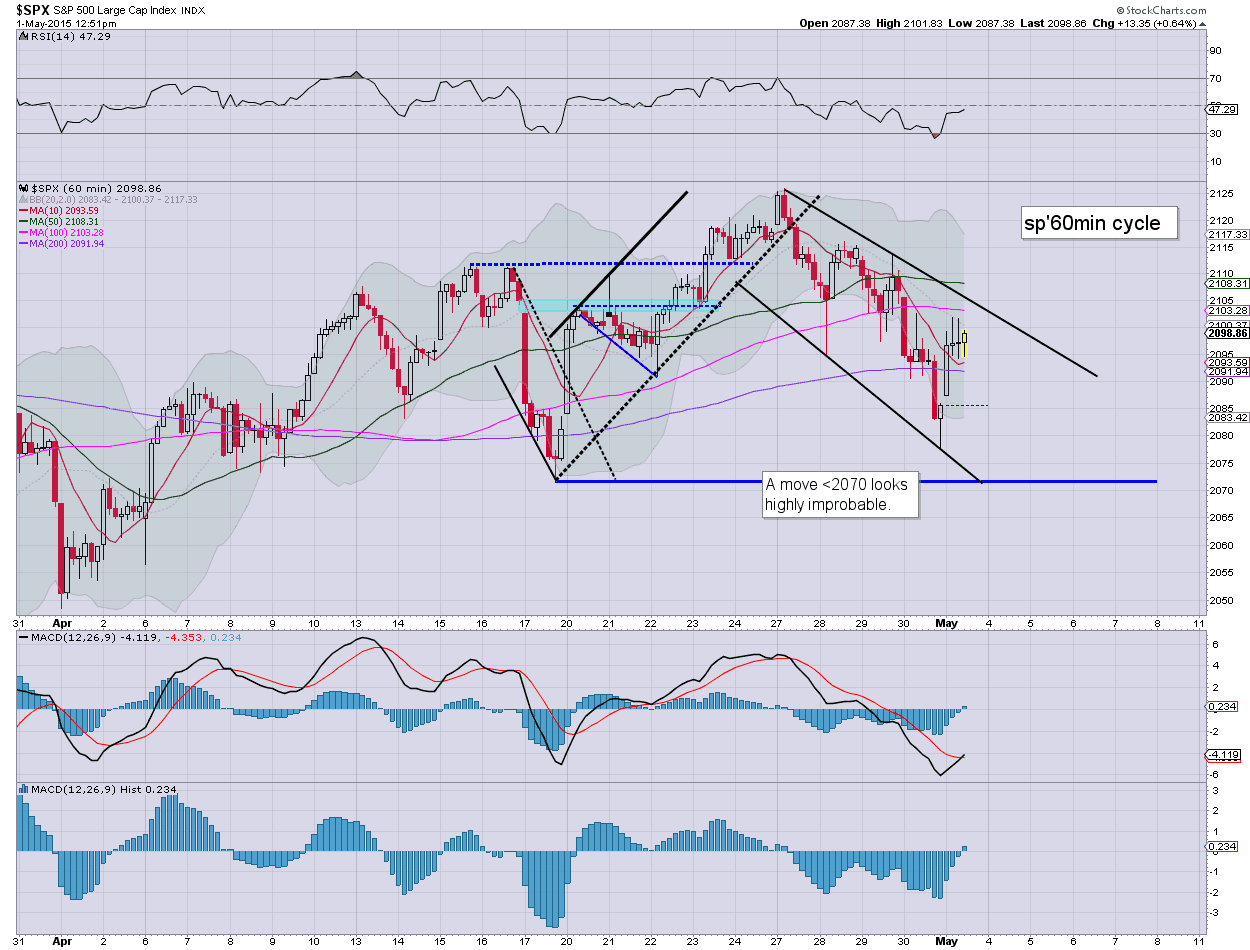 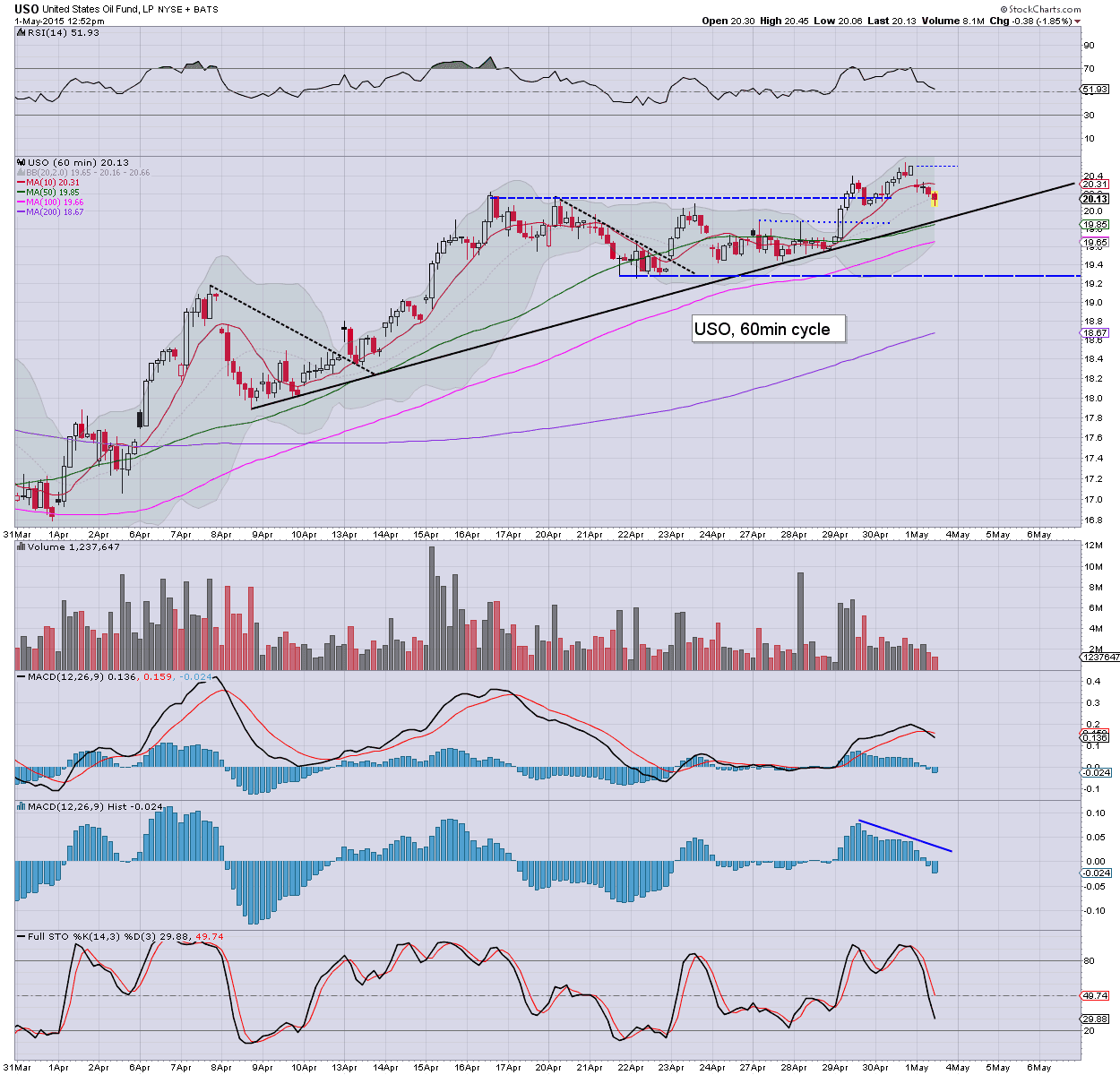 *the weakness in Oil is very natural.. having hyper-ramped by 25.6% across April. Another 1-3% lower would do nothing to the broader trend.
--

Best guess... renewed weakness... to the low 2070s next Mon/Tuesday. That would be in sync with a rising USD.. and falling Oil.

I'm inclined to see this rolling lower into the weekly close... with downside to the low 2070s next Monday.

*eyes on BABA... with a floor of $80.12....  earnings at the Thursday open.. but more on that one next week!
Posted by Trading Sunset at 17:54:00
Email ThisBlogThis!Share to TwitterShare to FacebookShare to Pinterest 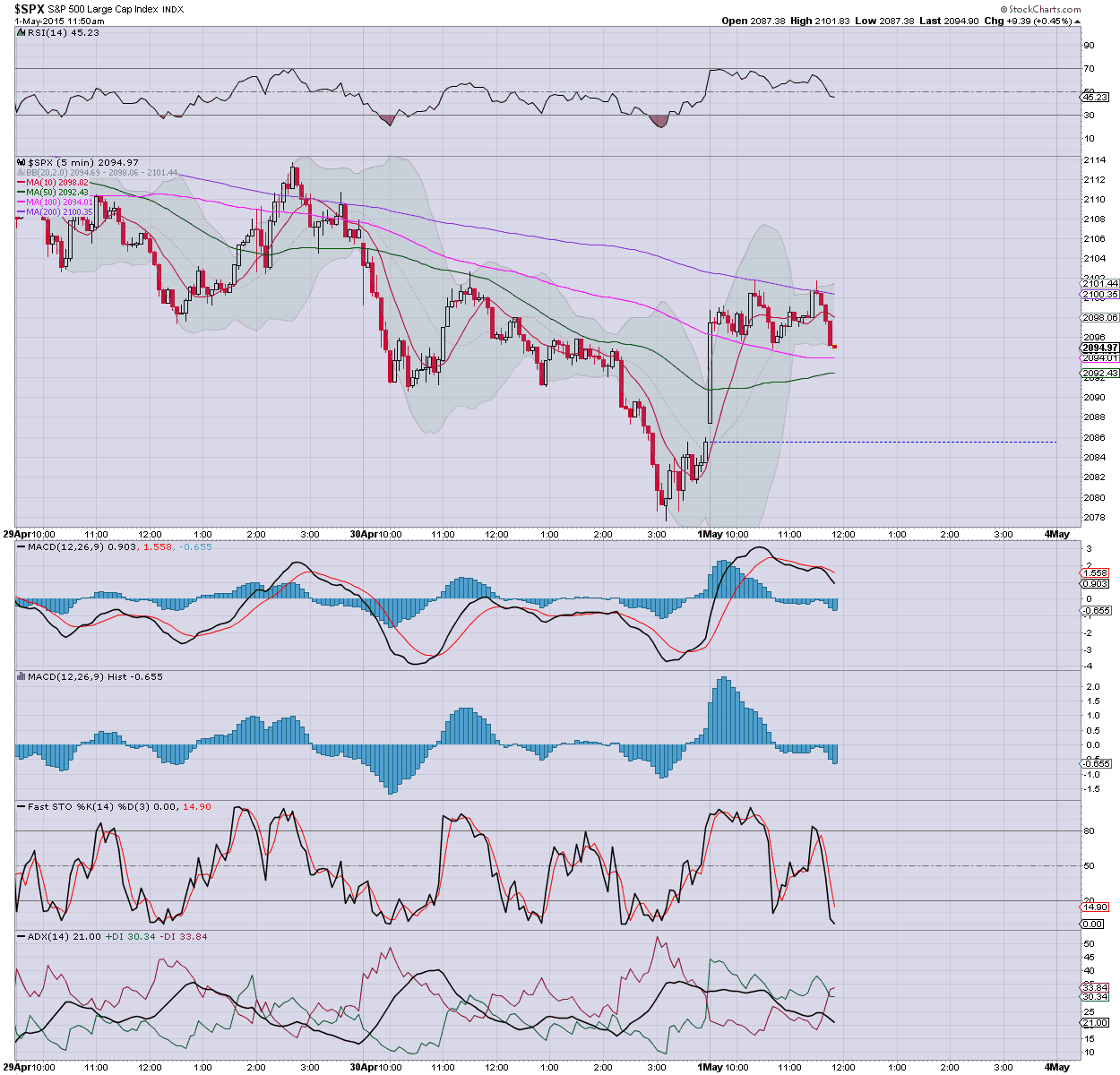 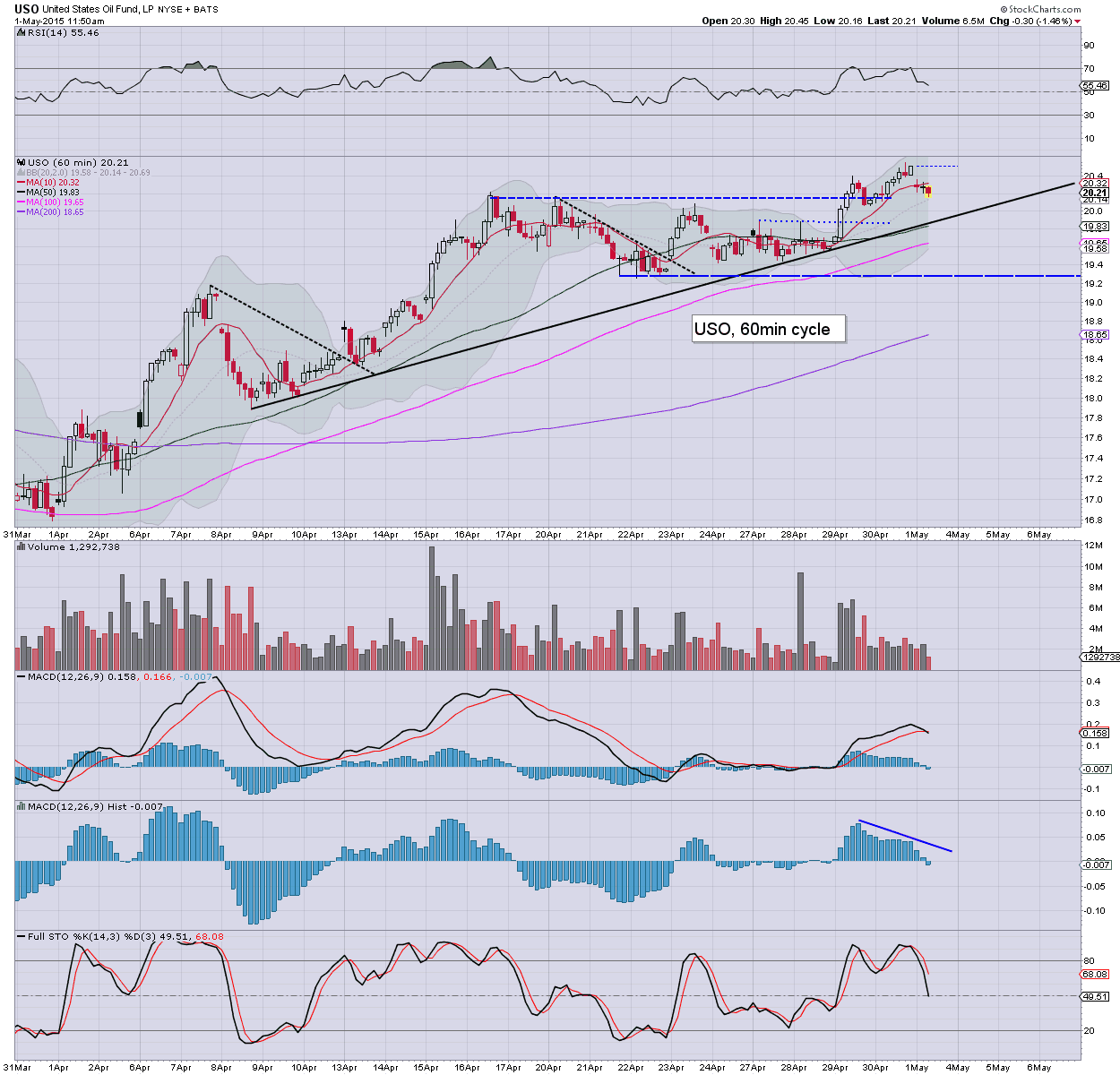 We have an interesting afternoon ahead!


--
time for lunch
Posted by Trading Sunset at 16:51:00
Email ThisBlogThis!Share to TwitterShare to FacebookShare to Pinterest

11am update - stuck at the bounce high

US equities remain moderately higher, but have clearly got stuck a touch below the Thursday bounce high of 2102. With the recent technical breaks - especially for the Trans/R2K, market will be vulnerable to testing the key low of 2072. With the USD on the rise... the pressure is on the bulls into next week. 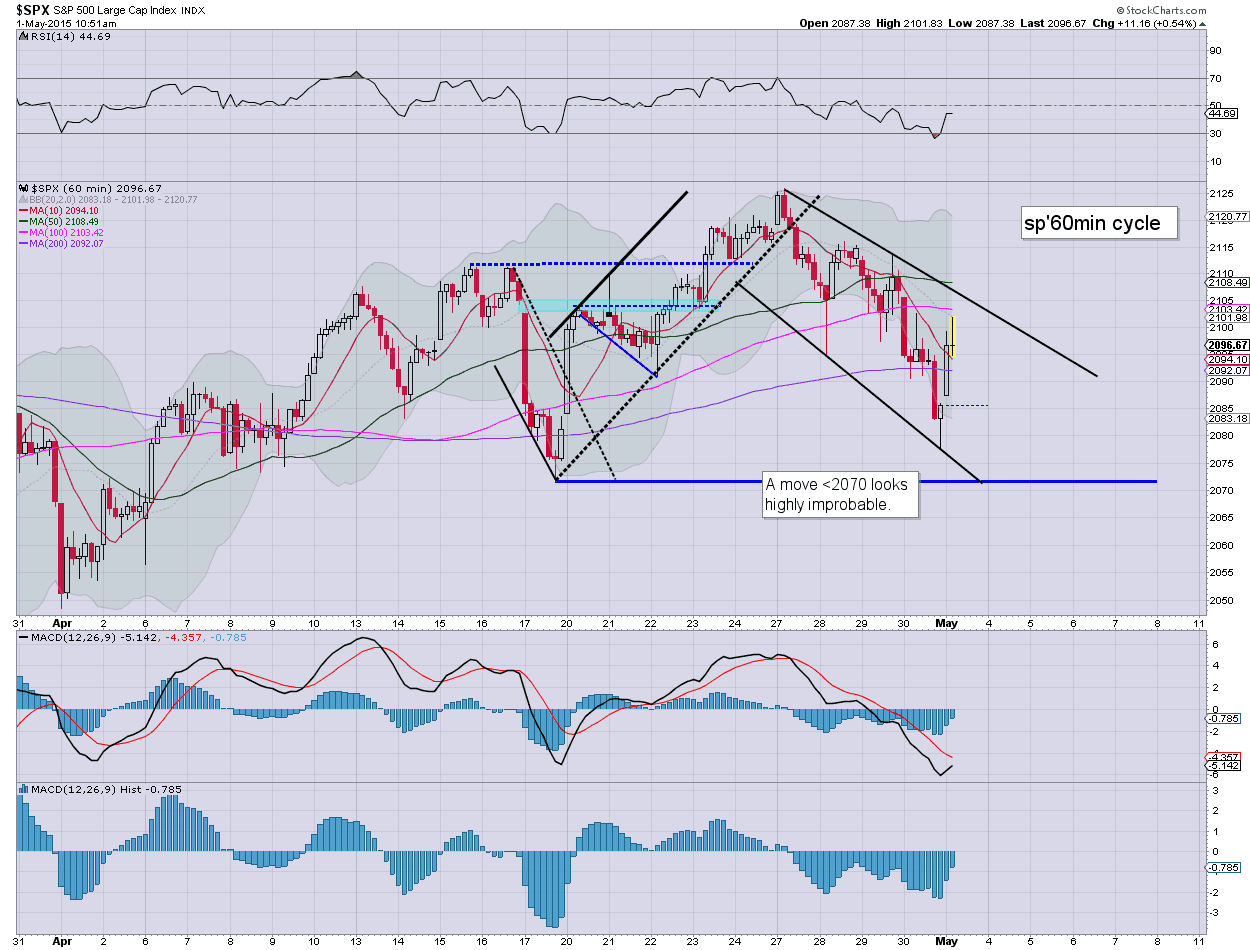 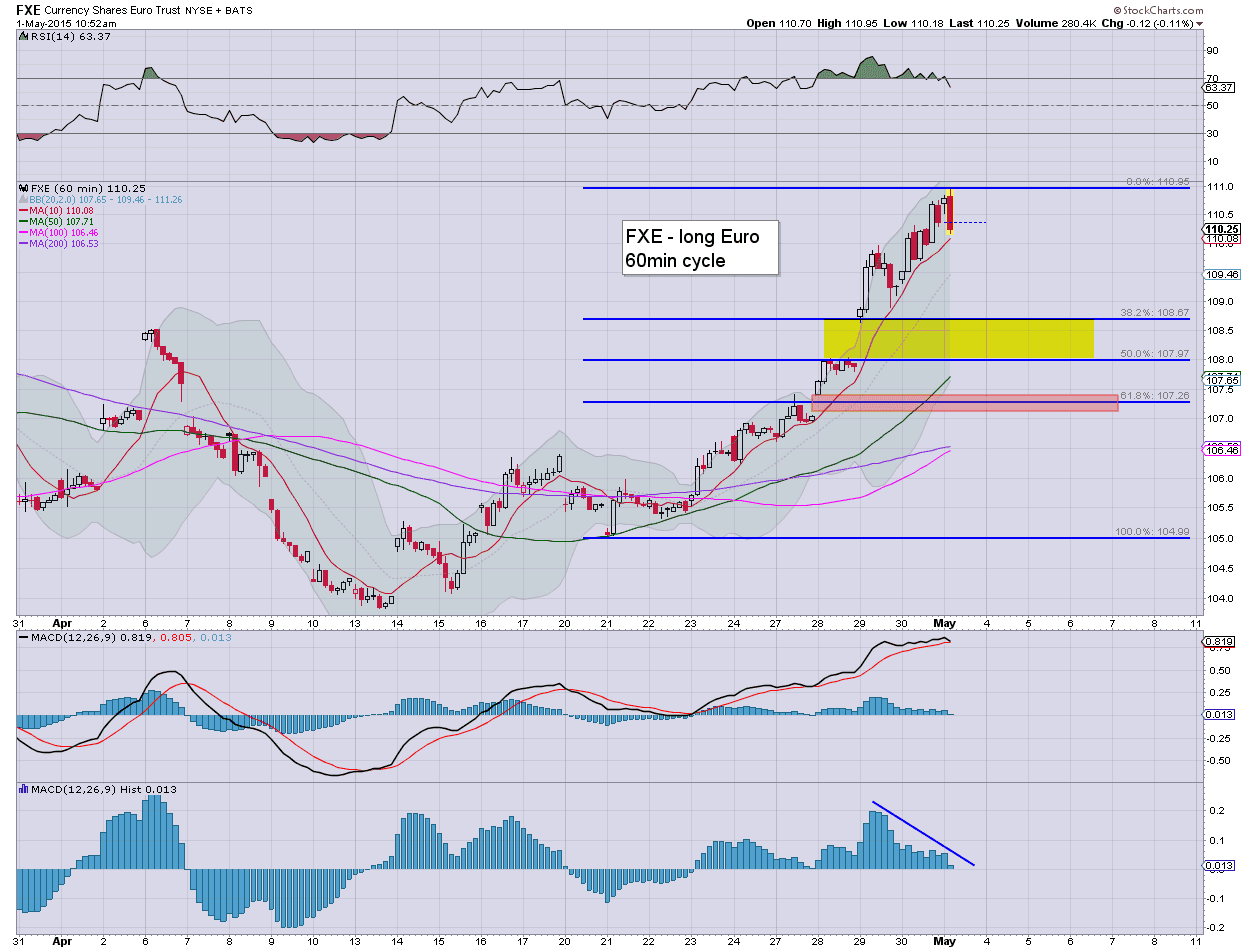 *metals and Oil remain notably weak.. as the USD is offering a multi-day rally.
--

So... its 11am.. and now the pressure will be on the bulls to hold the gains.. as we're due for a down wave into the early afternoon. A net daily decline is currently viable, first downside is sp'2072.

We have an interesting afternoon ahead!
Posted by Trading Sunset at 15:55:00
Email ThisBlogThis!Share to TwitterShare to FacebookShare to Pinterest 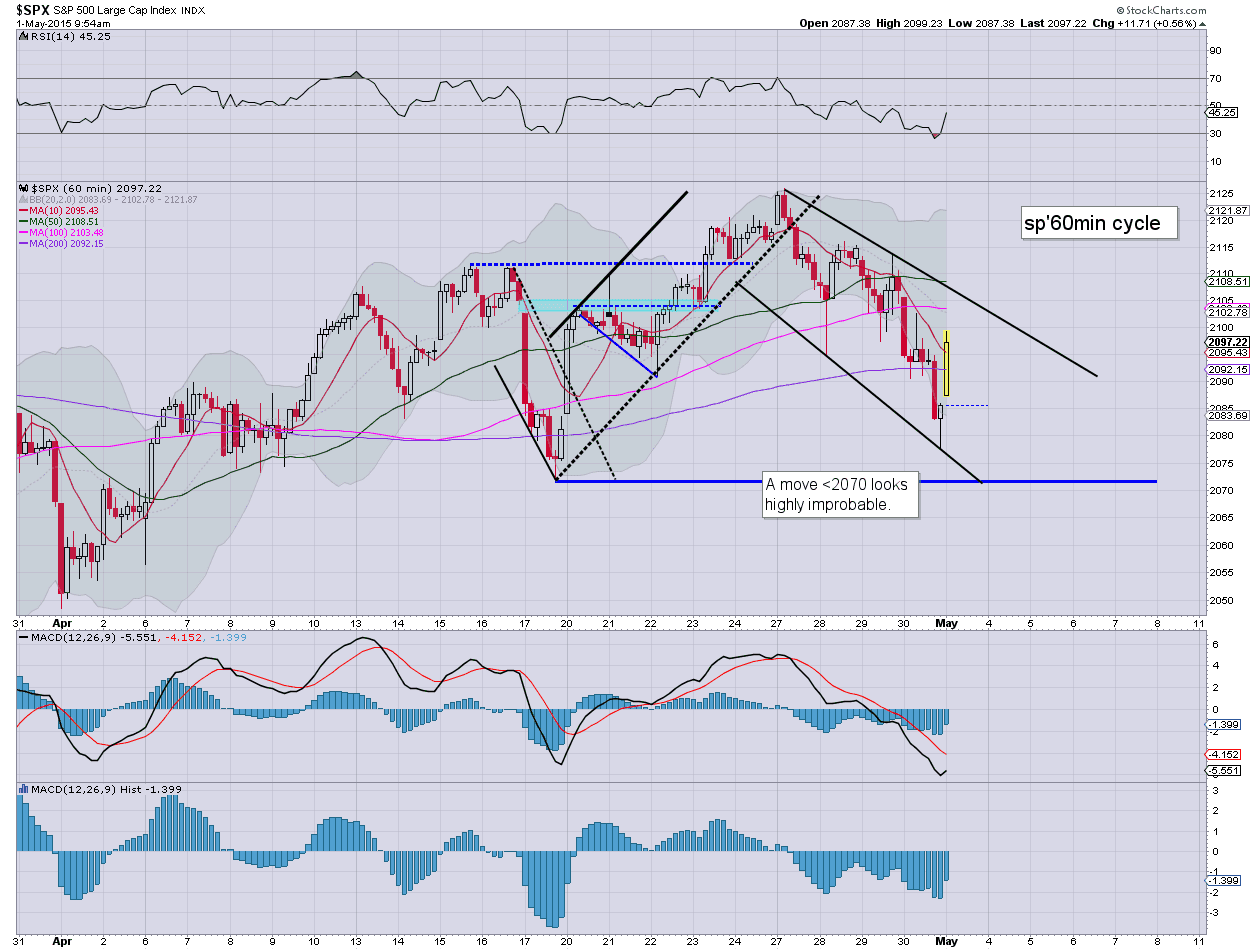 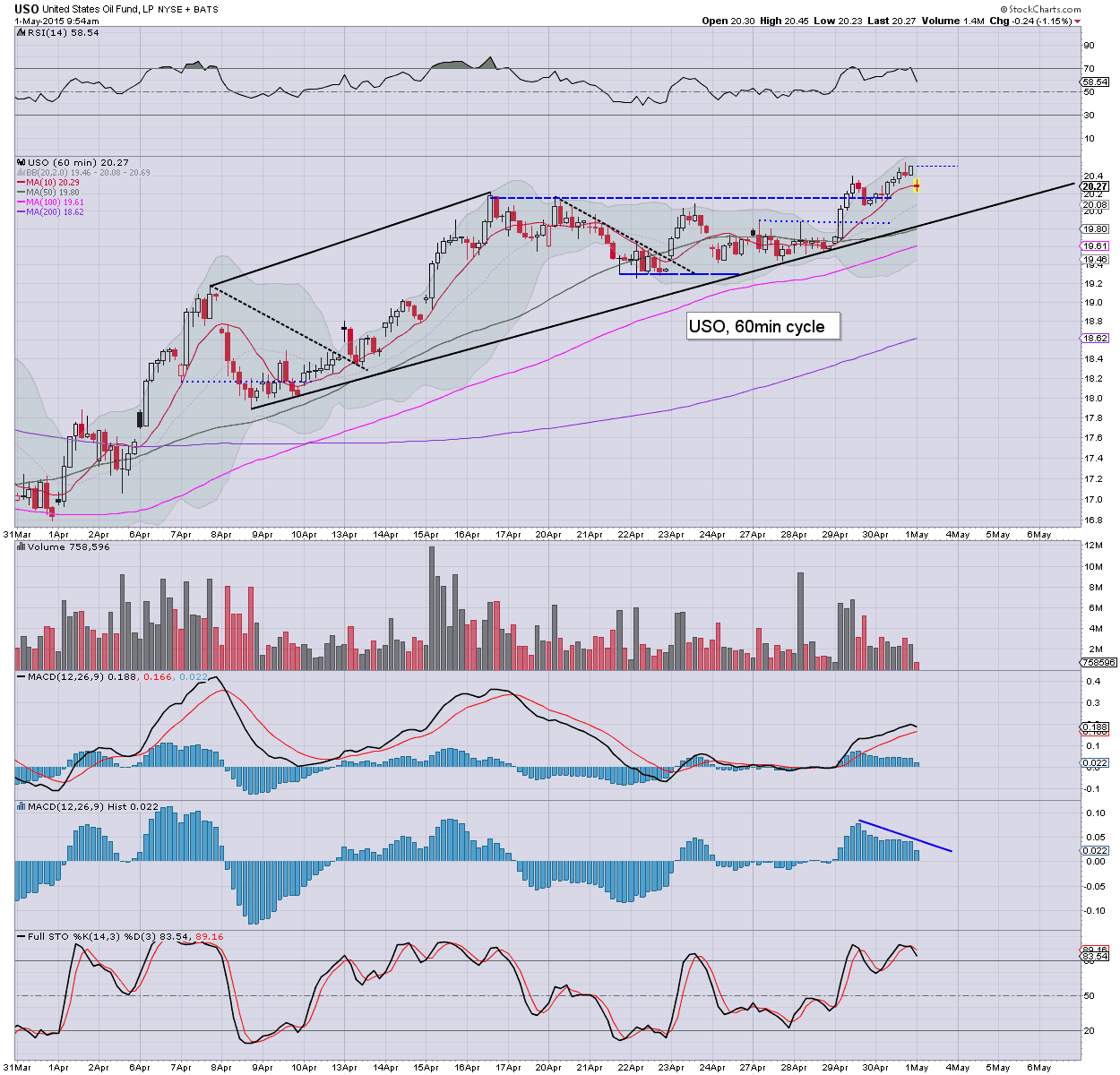 *I've eyes on Oil.. and the Euro.. both as potential longs.... I continue to refrain from meddling in the actual indexes.
--

I have a truck load to say on the giant monthly equity cycles.. but will leave that for a little later.
-

Suffice to say.. as for today.. its looking a rough start to the month for those in bear land. A weekly close >2102 would be a problem, although I realise some would merely call it a B wave bounce.

In any case.. the broader trend remains to the upside... the USD still looks set for broad weakness for another month or two.
--

notable strength: AA +2.0%... a somewhat rare gain.. and that stock remains in a broad down trend.. still looks headed for $10/9 this summer.
Posted by Trading Sunset at 14:55:00
Email ThisBlogThis!Share to TwitterShare to FacebookShare to Pinterest 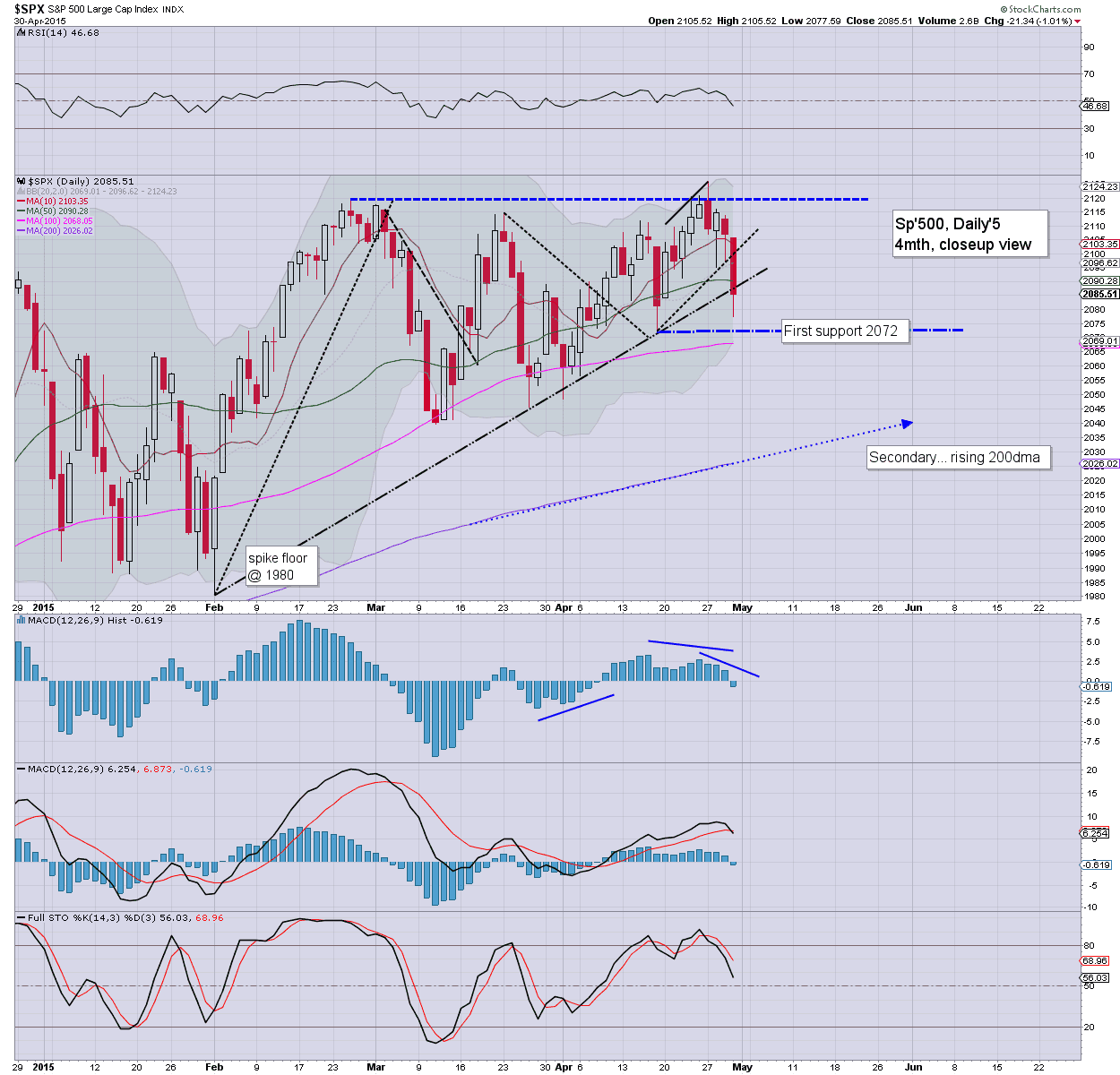 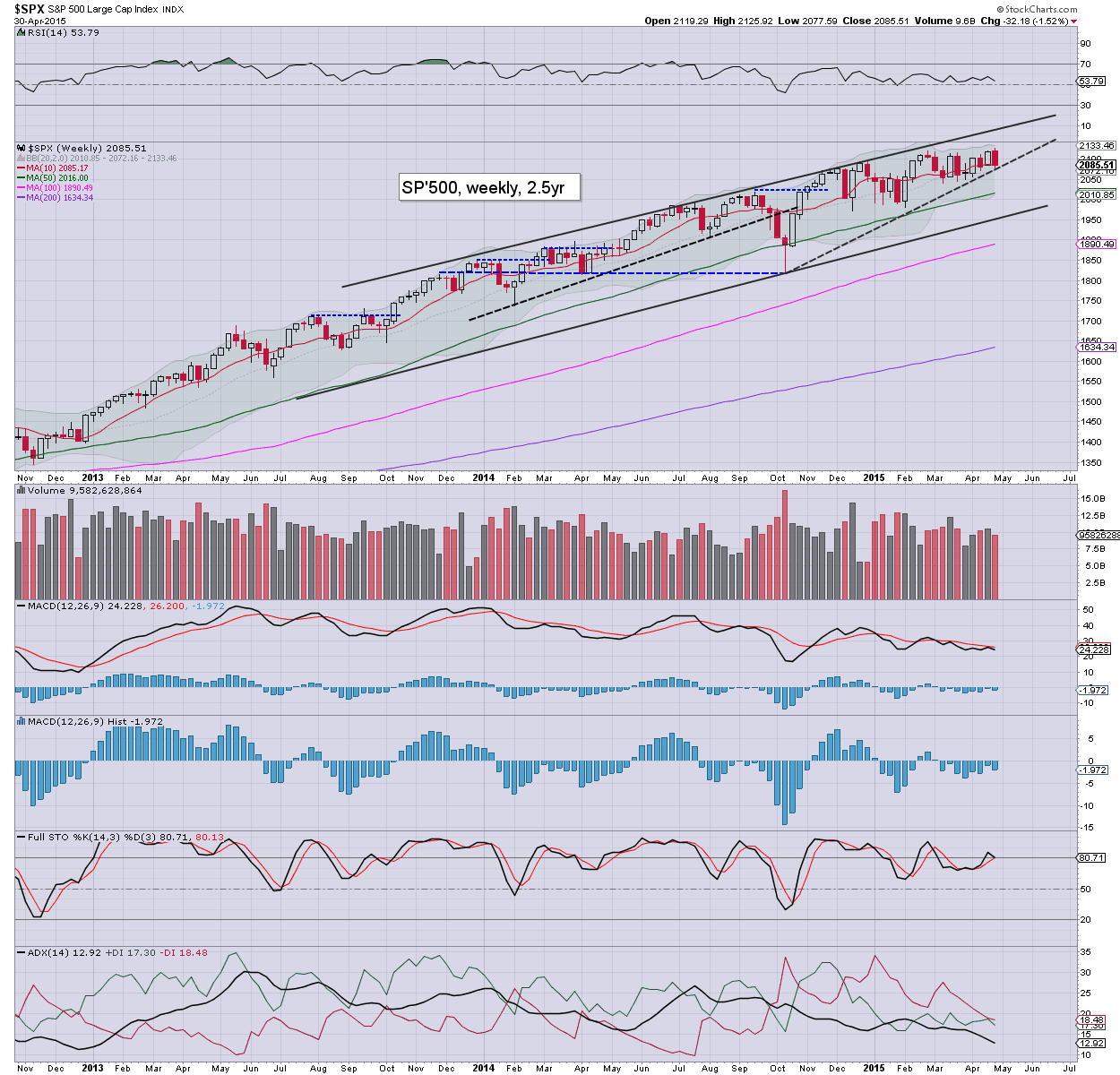 A new month begins.. and we're set to open higher, although all indexes are set for sig' net weekly declines.

For the equity bulls, a weekly close back above the 50dma of sp'2090 would be useful.

*I realise some will be seeking major sig' equity downside this month, but the USD still looks due to cool to the DXY 93/92s.. and that will help any equity down cycles.

For now... it looks like most indexes will be continue climbing into June... not least as energy stocks power upward... as Oil will doubtless break into the $60s.
--

For the true technical maniacs out there, something to watch for at the open... upper/lower bollinger bands adjusting on the bigger weekly/monthly cycles, along with the MACD cycles.
--

April was a pretty dynamic month for the world capital markets. The broader US equity market saw moderate gains, with a new high for the sp'500 of 2125. China continues to soar, with some contrasting weakness in Germany. WTIC Oil and Copper saw significant gains of 25.6% and 5.3% respectively.


Lets take a look at a few random bits and pieces...to wrap up the month! 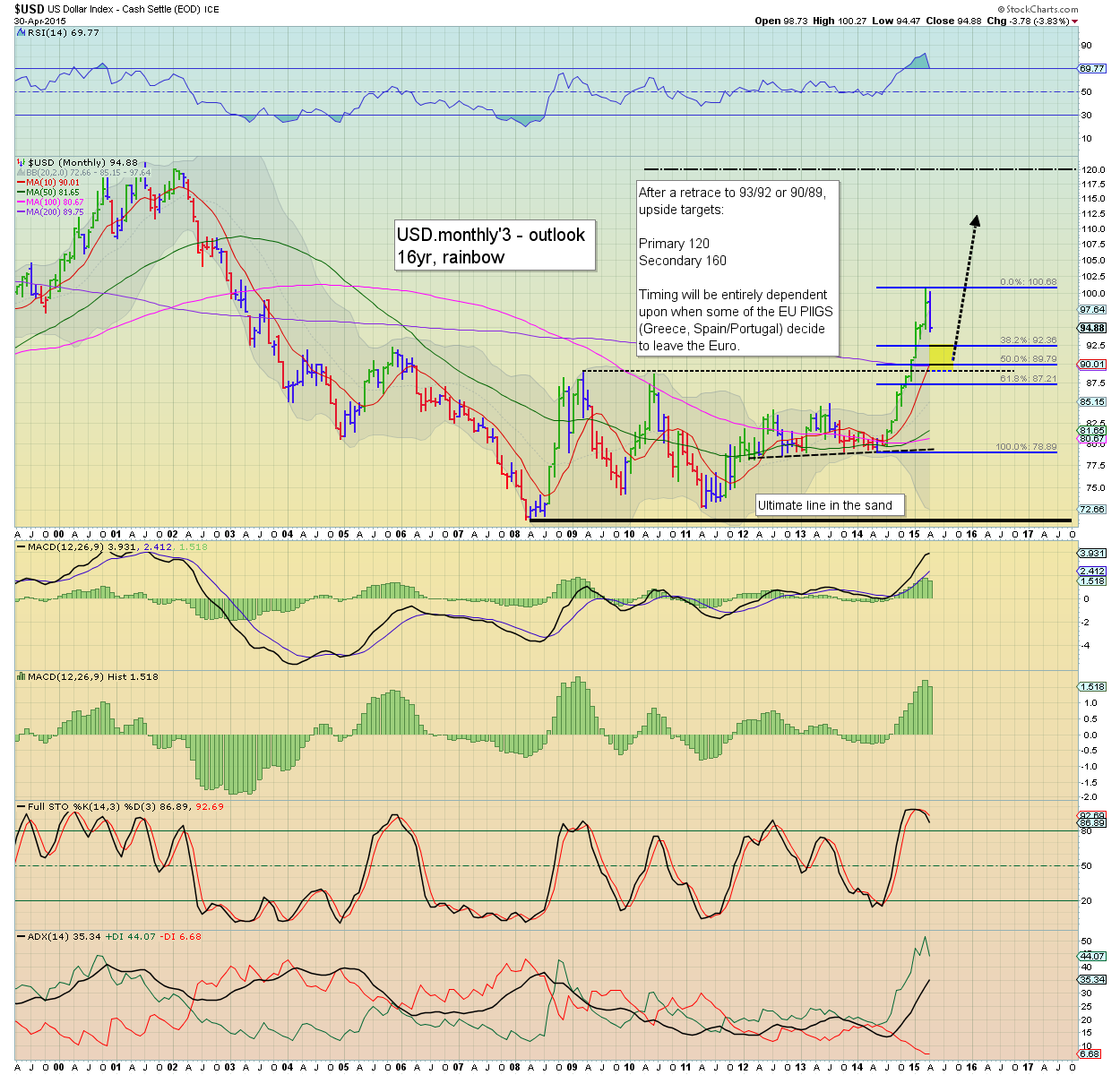 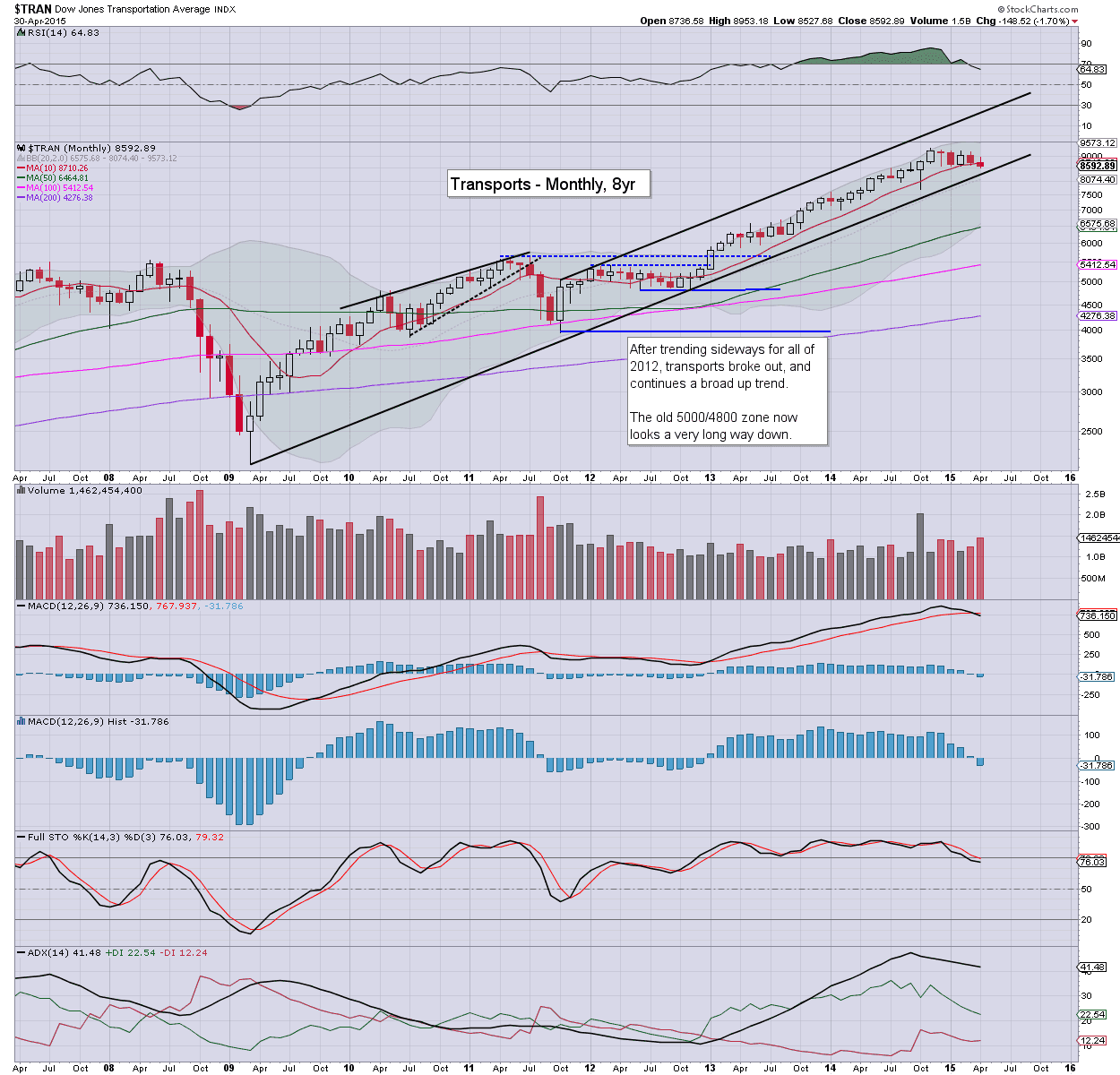 A net monthly decline of -1.7%, and notably.. the Trans has seen 4 monthly declines in the past half year. Overall though.. the broader upward trend is holding. Ultimate downside case for the bears this summer/autumn would be the lower bollinger... in the 7500/7000 zone. Underlying MACD (blue bar histogram) cycle settled negative, for the first time since Dec'2012. 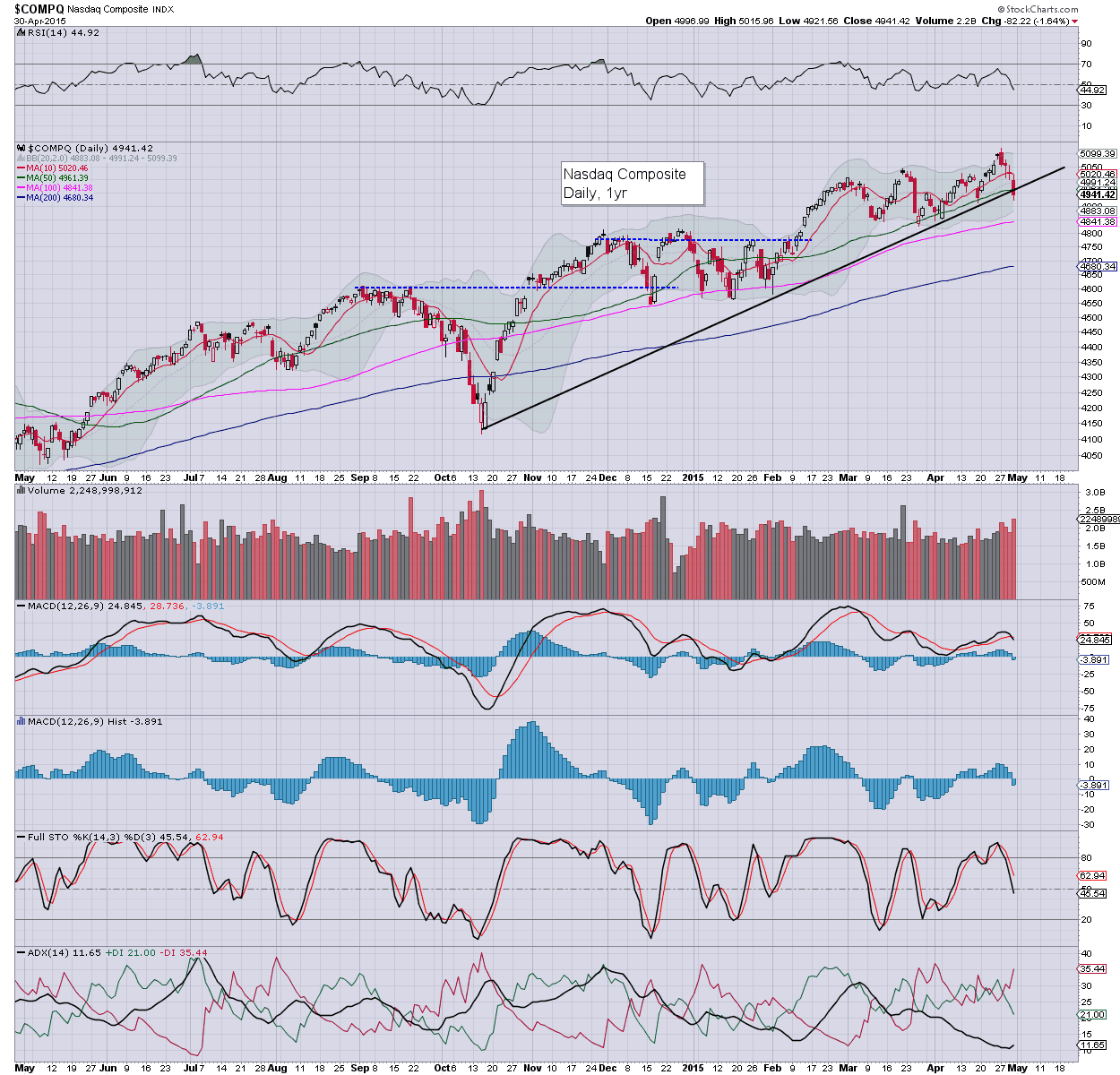 Despite a net Thursday decline of a rather significant -1.6%, it remains notable that the Nasdaq continues to broadly climb. The tech' saw a moderate net monthly gain of 0.8%, having hit a post 2009 high of 5119.. a mere 13pts shy of the March 2000 high. All things considered, it would be surprising if the Nasdaq doesn't at least test the all time high in May/early June. 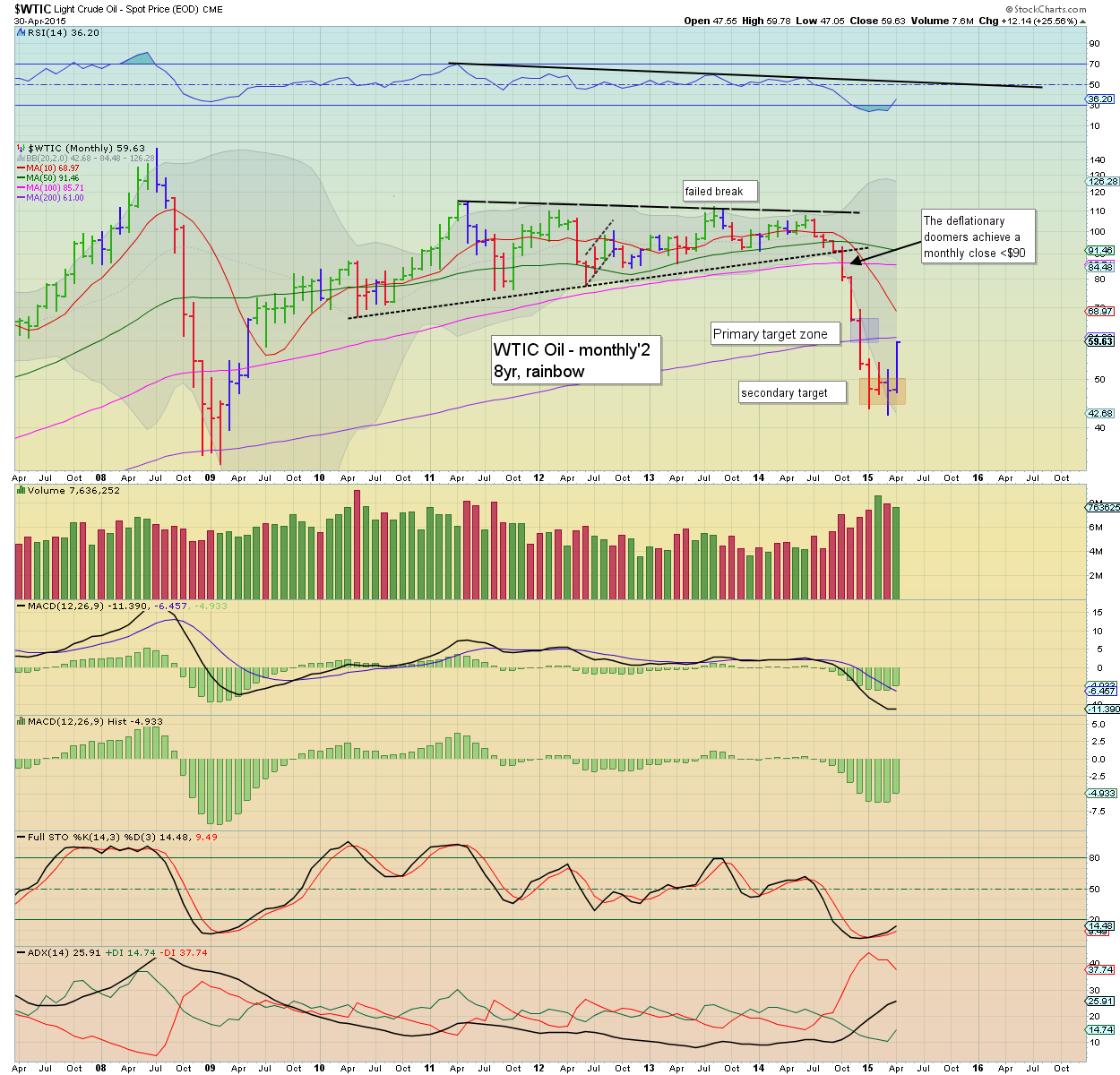 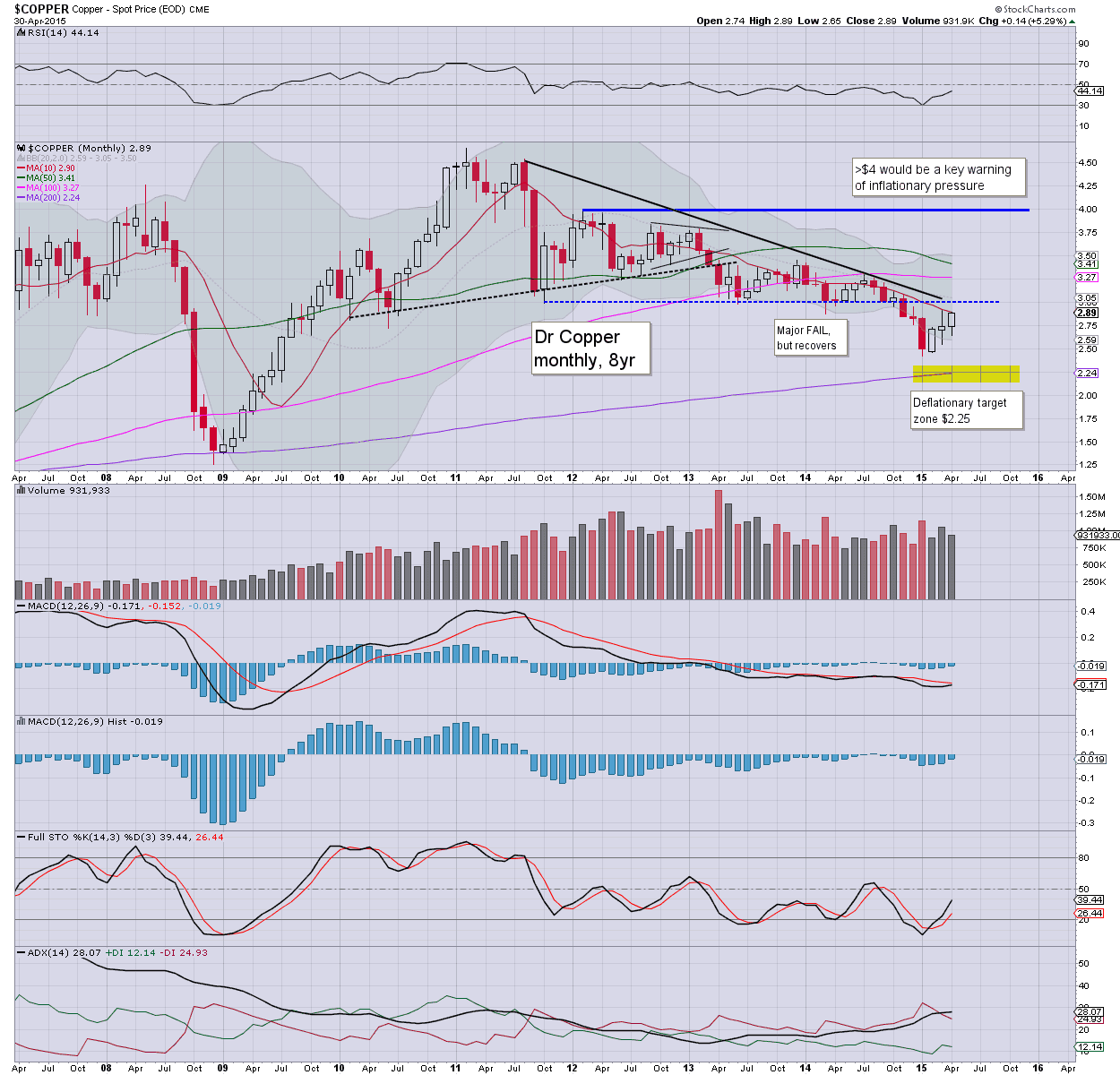 Copper climbed for the third consecutive month, with a net monthly gain of 5.3% @ $2.89. A monthly close above the $3 threshold will not be easy as world supplies of many resources remain above demand. 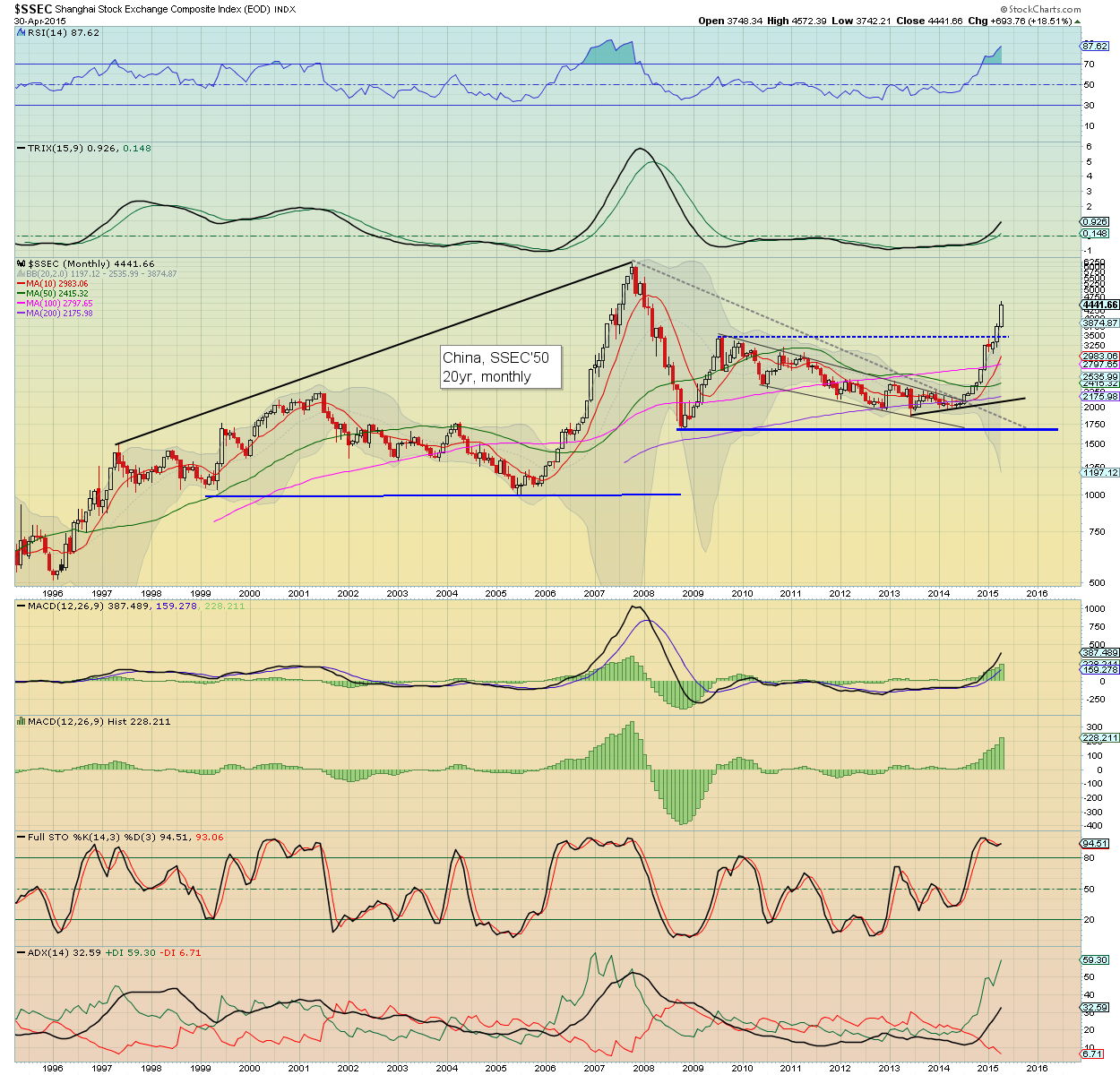 A rather incredible net monthly gain of 18.5%.. with the Shanghai comp' having broken a new seven year high of 4572. First soft support is the psy' level of 4K, and then the breakout zone of 3300/500s. The giant 5K threshold looks an easy target... with seemingly likely hyper upside across 2016/17.. possibly to the next monstrous psy' level of 10K.
-

US equity indexes closed significantly lower, sp -21pts @ 2085. The two leaders - Trans/R2K, settled lower by -1.2% and -2.1% respectively. With April ending on a dour note, near term outlook is moderately bearish. It is highly notable that core rising support for the sp'500 will be around 2025 in May. 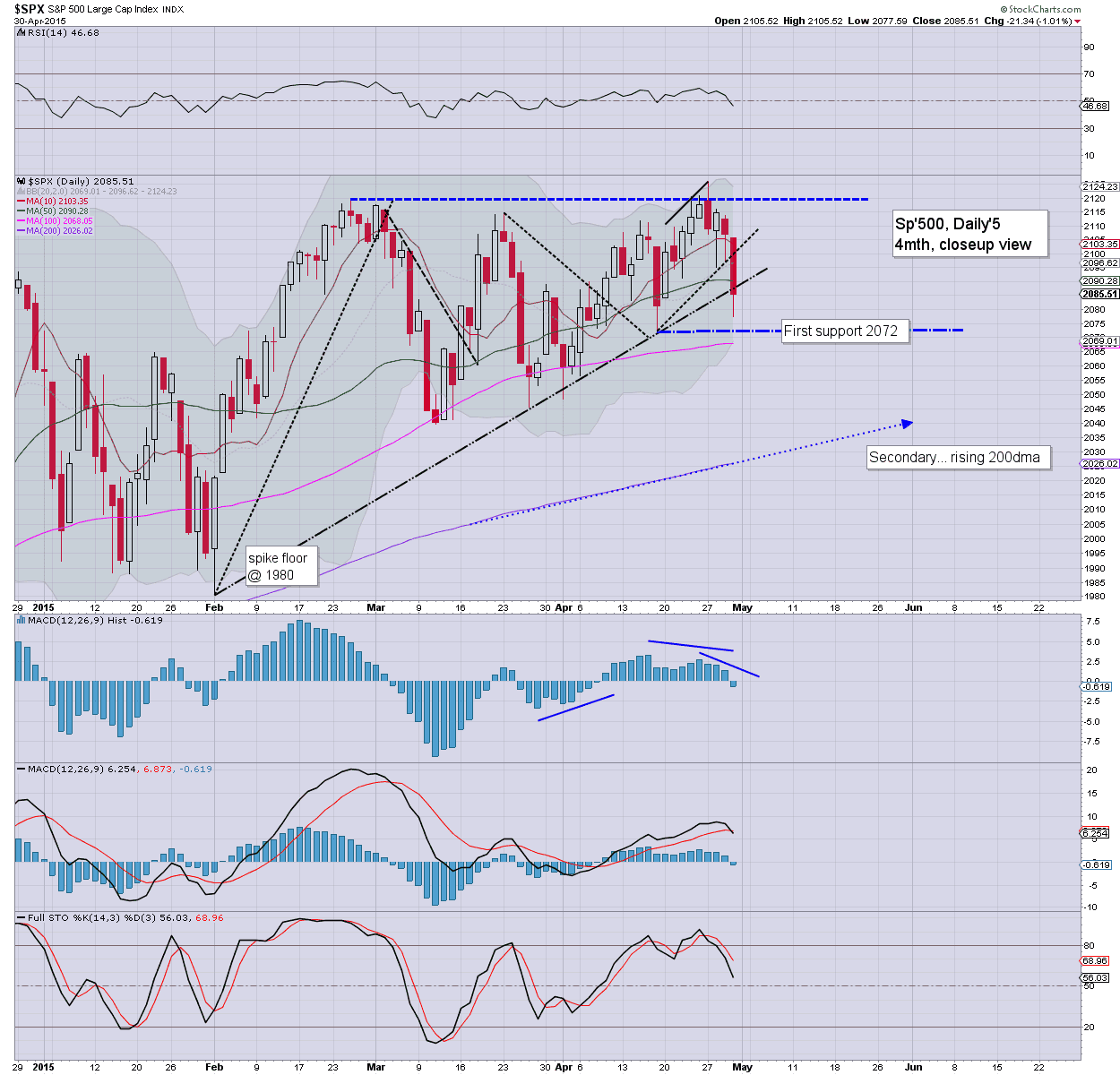 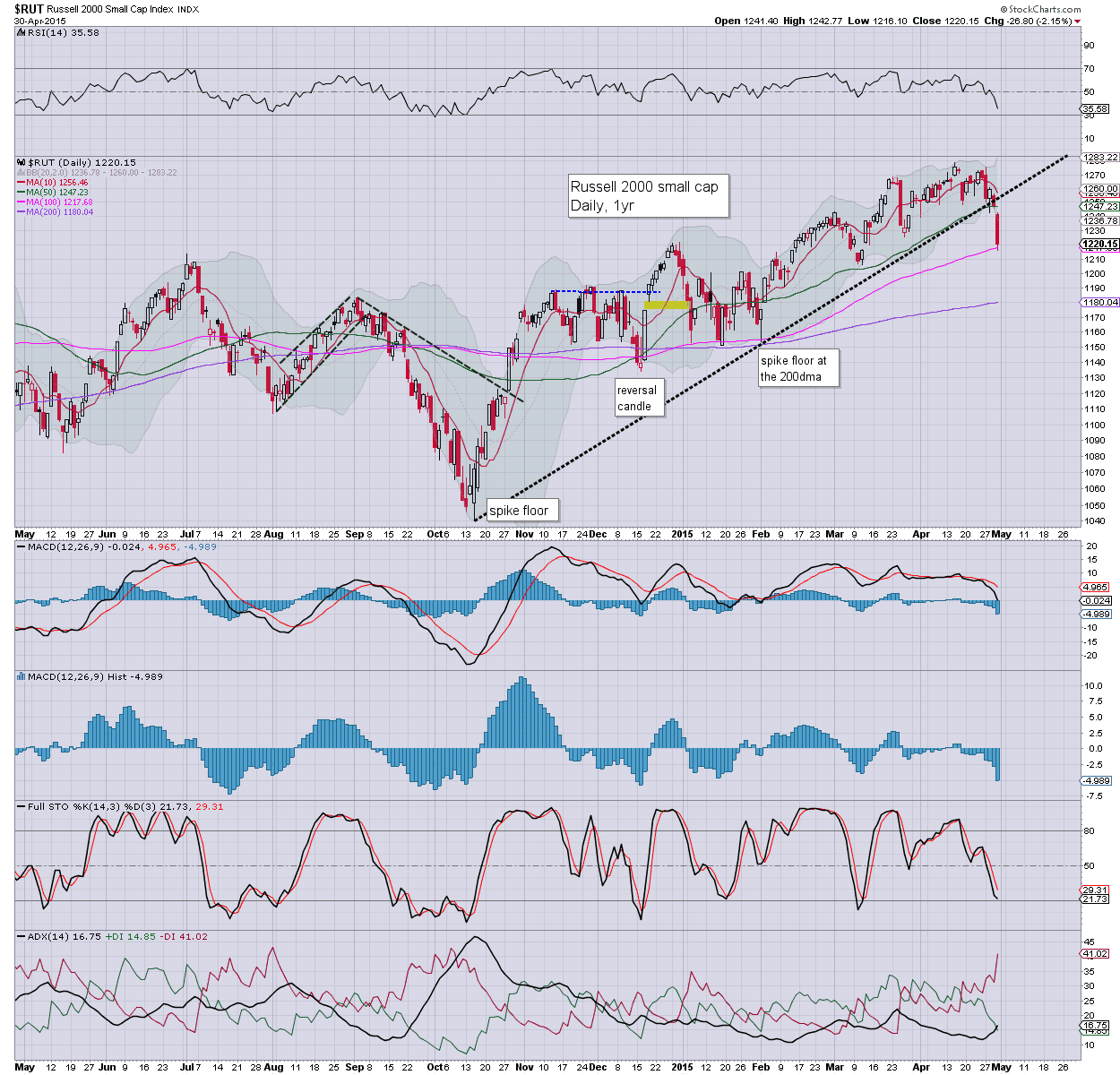 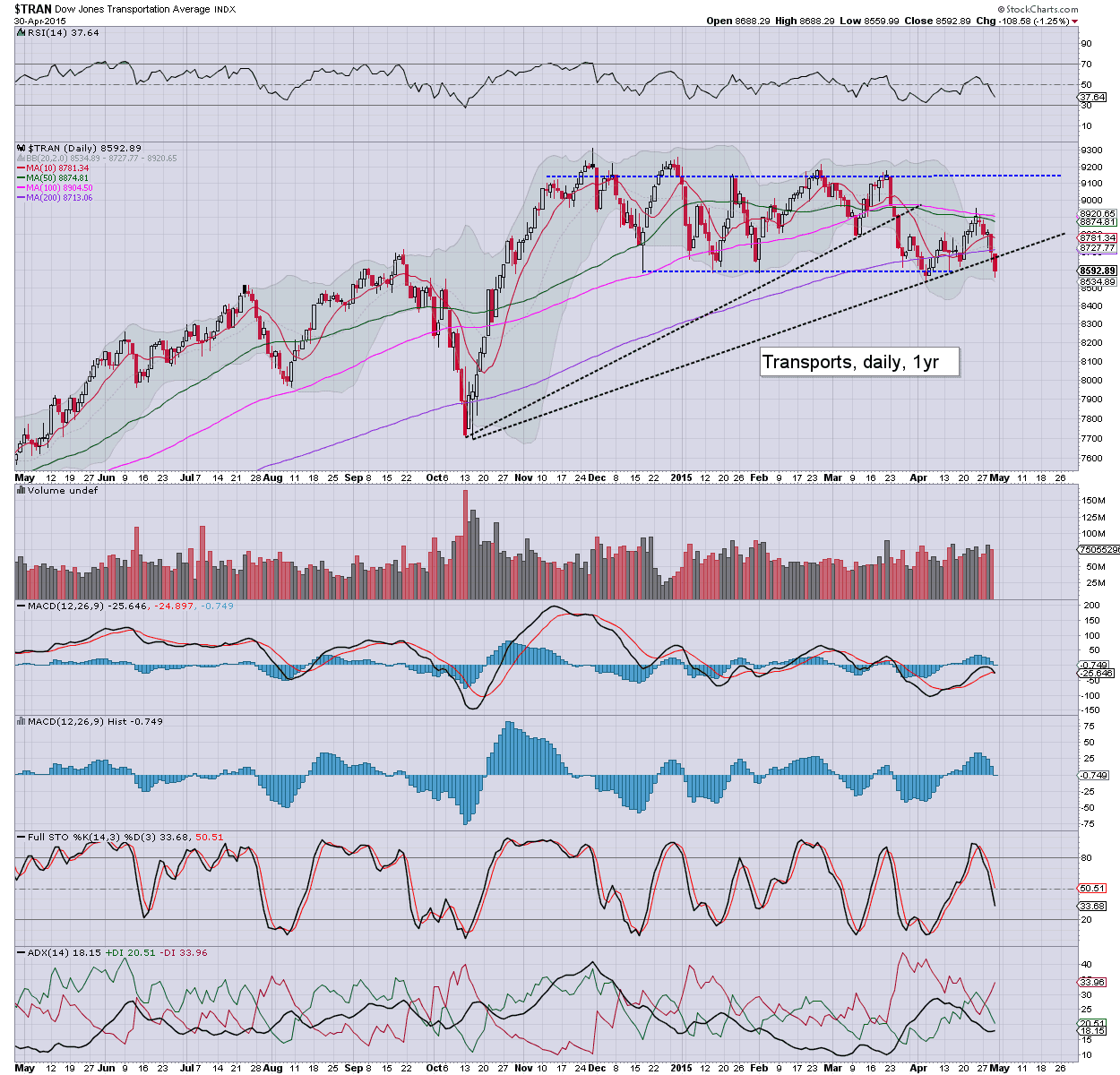 We now have clear breaks of rising trend on the two leaders - Trans/R2K.

Underlying MACD (blue bar histogram) cycles are turning negative across all indexes.. with momentum clearly swinging toward the bears.

Things are getting marginally interesting.

--
a little more later... with bits and pieces on some of the monthly closes
Posted by Trading Sunset at 01:00:00
Email ThisBlogThis!Share to TwitterShare to FacebookShare to Pinterest
Newer Posts Older Posts Home
Subscribe to: Posts (Atom)