With the main indexes remaining stuck under the mid-Sept' sp'1474 high, the VIX continues to flatline. The VIX closed +0.03% @ 13.55. If the indexes do rollover in the near term, a brief VIX spike into the low 16s still seems viable. 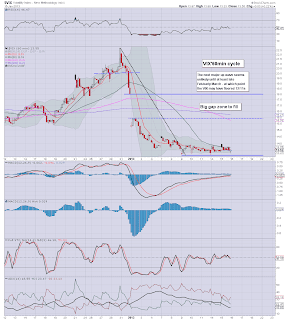 The opening black candle on the hourly chart was another good example of an 'opening fail' this morning.

Its kinda appropriate that the VIX is flatlining, whilst the main indexes remain stuck - for a tenth day under the key sp'1474 high.

However, my best guess is that we'll still see an equity retracement to the sp'1440s, but that outlook is becoming increasingly weak.
-

More later..on the daily indexes.
Posted by Trading Sunset at 23:00:00
Email ThisBlogThis!Share to TwitterShare to FacebookShare to Pinterest

A very tiresome Tuesday, yet another day where we remained stuck just below the mid-Sept high of sp'1474 - although the Transports continues higher, along with the Rus'2000, both clearly headed for infinity 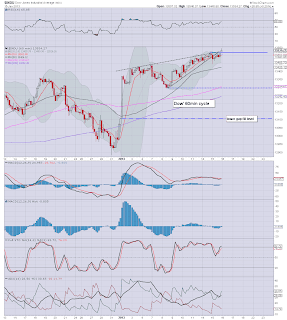 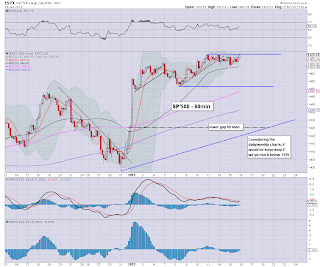 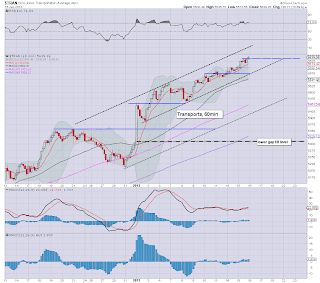 There is very little to say, the main indexes remain stuck, aside from the tranny/Rus'2000 both of which just keep on breaking new highs.

Its obvious to say, but either this is just a very extended topping formation (short term)..or its merely the market consolidating sideways before the next lurch higher.

Frankly, I'm really tired of this sideways nonsense, I'd almost prefer a brief snap to the upside.

Anything to end the current range!
Posted by Trading Sunset at 21:02:00
Email ThisBlogThis!Share to TwitterShare to FacebookShare to Pinterest

Mr Market is still largely flat for the day, although the Transports just keep on pushing higher. There is huge underlying strength out there. The weakness that is out there is extremely limited, and even the sp'1440s are now laughably going to be difficult to hit. 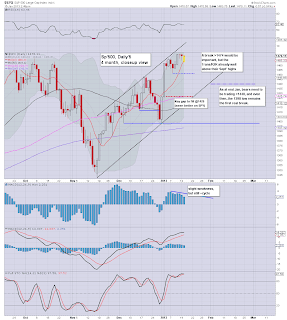 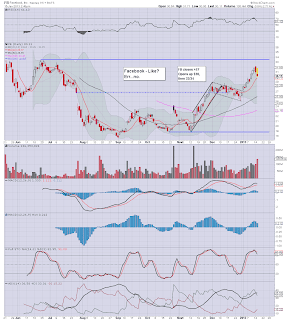 The piece of over-hyped trash that is the FB is 3% lower. The stock is still surrounded by immense hysteria, and without question..is best left alone. No doubt, there will be many from the IPO still looking to exit for evens at the $38 level this coming spring.

If the algo-bots wanna do a short-stop run before the close..now would be the time.

Posted by Trading Sunset at 19:50:00
Email ThisBlogThis!Share to TwitterShare to FacebookShare to Pinterest

Yet another micro-rally brings the market right back to evens, and a mere 5pts from breaking the mid-Sept high of 1474. There are notable declines still in AAPL, with the precious metals showing some strength, despite a moderately higher dollar. 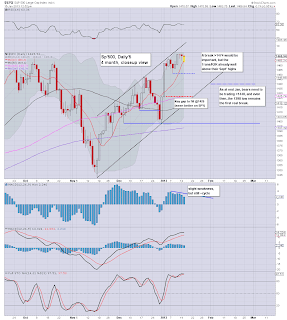 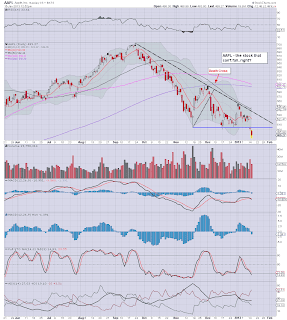 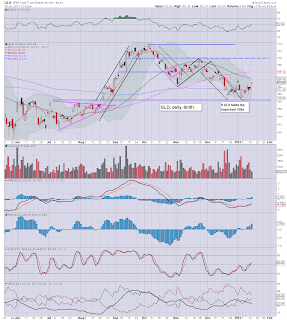 Overall, its still pretty dull out there.

Bears lack any momentum/power, and this is now day'10 of what is a very tight trading range.
--

I'm still seeking a retracement, but with each day, even the1440s are looking increasingly difficult.
--

back at 3pm
Posted by Trading Sunset at 17:54:00
Email ThisBlogThis!Share to TwitterShare to FacebookShare to Pinterest

Its getting tiresome already in market land. Certainly, we are starting to pull away from the 1472 high, but we're still less than 0.5% away, and meanwhile, the Transports puts in yet another high. There are endless signs of the underlying strength that has continued since the summer 2012 low of sp'1266..some 200pts lower! 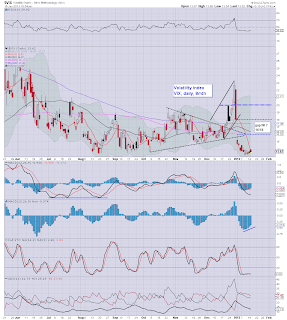 I'm certainly still guessing we see a retracement, at least to the low sp'1440s, but possibly to fill that giant gap in the mid 1420s.
--

Clearly though, today is going to remain dull.

Unless you're an AAPL holder in which case its not so dull...urghh... 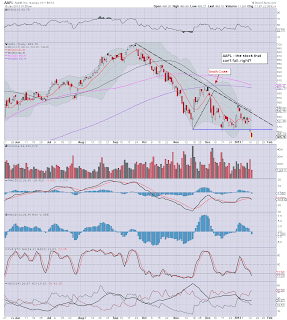 A wash-out move in AAPL to the 475/450, with sp'1425 ?
Posted by Trading Sunset at 15:56:00
Email ThisBlogThis!Share to TwitterShare to FacebookShare to Pinterest

There is some distinct weakness out there, and the market is starting to pull back from the sp'1474. I have to believe a break below the 1451 low will occur later this week, and at least a hit of the first retracement level of 1445/35. 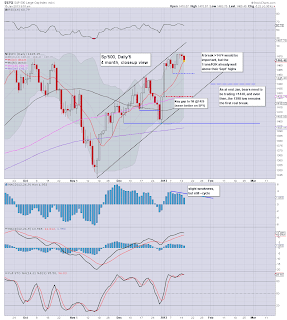 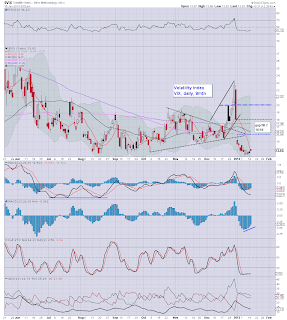 Retail sales data was reasonable, but the empire state survey was lousy. There is plenty of econ-data to come this week, although the really major data is not until the end of the month - inc. Q4 GDP.
--

I remain short, seeking an exit in those low 1440s.

--
another lousy day in AAPL land.. 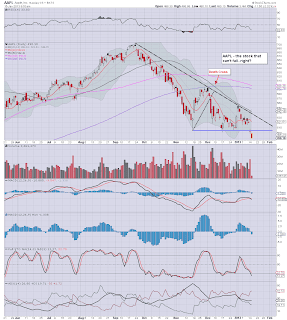 UPDATE 10.15am.  Another pathetically weak opening from the bears, with the VIX black candle indeed warning that the declines of barely sp'6pts can't even hold. 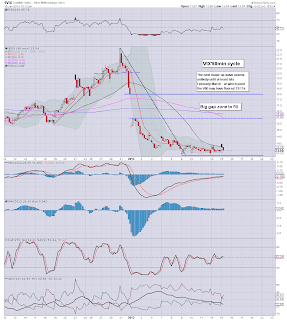 Its truly lame, and its only surpassed by those posters refusing to acknowledge the massive strength in the Tranports and the R2K
Posted by Trading Sunset at 14:54:00
Email ThisBlogThis!Share to TwitterShare to FacebookShare to Pinterest

SP'500 stuck under the mid-Sept highs

The SP'500 remains stuck just under the mid-Sept QE high of 1474, where it has resided for the past nine trading days. A break above would open up the 1480/90s, although a retracement still seems likely, at least down to the1440s, even if such a further move higher occurred. 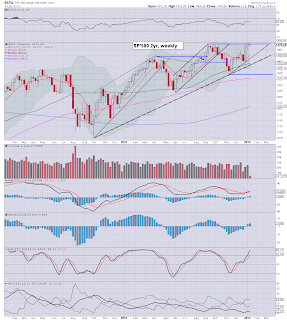 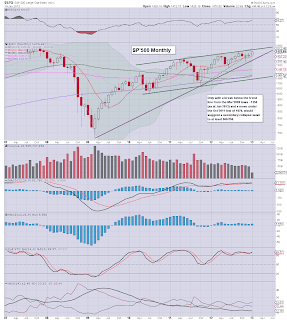 The weekly chart shows how after the opening hyper-ramp, we're now stuck at the highs from last September. Although once again, I'll note that the two leading indexes - the Transports, and the Rus'2000, are already way above their Sept' 2012 levels.

It sure won't take much of an excuse to break over sp'1474, and no doubt if that occurs..a major short-stop cascade would occur, and we would see some chasers come in, probably kicking the market into the 1480/90s. Regardless of news, I don't expect the big 1500 level this month.

On balance, it still seems we are going to see the sp'1510/20s next month, or in March. With QE now permanent (despite what the FOMC minutes were translated as suggesting), it remains the case that the underlying pressure will be to the upside.

Looking further out, to April/May, a major wave to the downside is certainly possible, and if that's the case, then the low sp'1200s would STILL be the obvious target in my view. A move from the 1500s to the 1200s sure would make for a massive shake-out, but that seems highly unlikely until Q3.

As is usually the case before a major down wave, we would arguably need to put in an initial 1-2 month down cycle (such as May/June 2011) before any major wave can occur. It takes considerable time to build downside momentum, and right now, we obviously have quite the opposite.

First things first then, lets see if the 1474 line holds, then a minor retracement, and further gains into February/March.

--
I remain short, seeking a brief retracement down to at least sp'1445/40 later this week, and then I look to go heavy long - including SLV (the precious metals are displaying a giant bull flag on the weekly charts)

Goodnight, from a somewhat snowy London
Posted by Trading Sunset at 04:00:00
Email ThisBlogThis!Share to TwitterShare to FacebookShare to Pinterest

The main indexes closed largely flat, on what was a really quiet Monday. Most notable aspect of the day, the Transports, which once again put in another higher high..breaking into the 5600s.The tech' sector remained slightly weak, with AAPL pulling the Nasdaq lower, but news of a possible buyout of DELL pushed things back higher into the close. 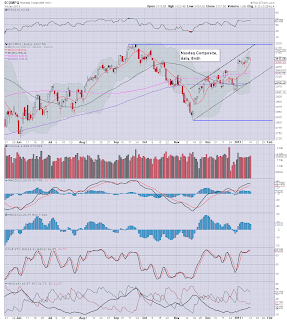 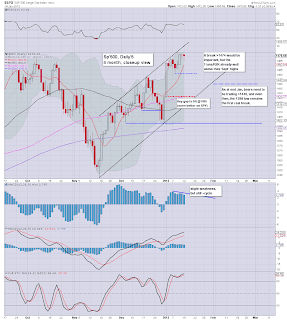 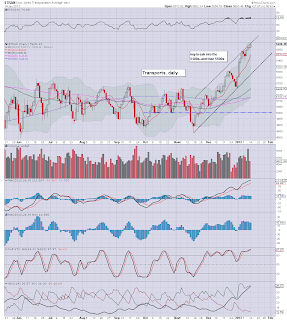 A pretty dull Monday, and were it not for AAPL breaking below the $500 level, many would have stayed fast asleep today.

The transports still looks incredibly strong, and is literally scraping along the upper channel line. It shows no sign of weakening. A retracement, if we get one, would be somewhere down to the mid 5400s, and that would still do no damage to the primary trend.

At this rate, transports in the 6000s looks very viable by March/April.

The SP' daily chart shows the 1425 gap level which I still think is somewhat important, although as we get to the end of this week, its not going to be possible to hit 1425, without breaking key rising channel support.

So, a retracement to 1425 - if its going to happen, would be much easier to occur this week, than next. As things are, I'm guessing we only decline to the low 1440s

In terms of the underlying MACD (blue bar histogram) cycle, we've now ticked lower for 4 of the last 5 days. Yet, we remain in positive cycle, and indeed the general price trend is still UP.

What is clear, the sp'1474 high from last September is a level that the market is responding to with caution. Even the algo-bots seem to be on the sidelines, waiting for the 1475s before they start buying again.