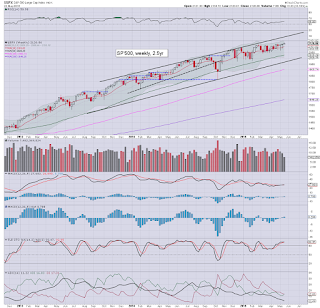 A third consecutive net weekly gain for the sp'500,+0.2%, with a new historic high of 2134. Underlying MACD (blue bar histogram) cycle ticked higher for a fifth consecutive week, and remains moderately positive. Upper bollinger offers the 2150s in the immediate term, and by mid June, the 2170s (which also happens to be the upper monthly bol') will become viable.

Core support will be around the giant 2K threshold in June/July, with the 200dma in the 2050/60s. Until equity bears can break back under 2000, there is zero reason to be bearish on US equities. 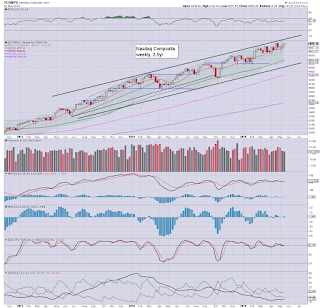 The tech' was the leader this week, with a moderate gain of 0.8%, settling at 5089, a mere 43pts shy of the March'2000 high. Indeed, a new historic high looks due this June. From there, a monthly close in the 5200s would give strong clarity that much higher levels - 5500/5750, are due before the next realistic chance of a broader market correction. 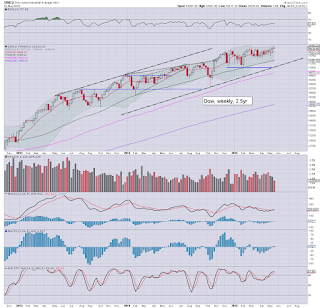 With a touch of weakness into the Friday close, the mighty Dow saw a net weekly decline of -0.2%, having broken a new historic high of 18351. The upper bol' is offering the 18400s in the near term, with 18500/600s in June. Considering the price action/structure in the Nasdaq comp' - and some of the world indexes (notably - Spain, China), the Dow looks set to battle upward into the 19000s before the next correction. 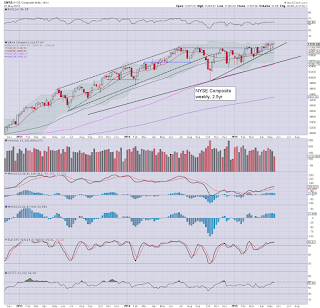 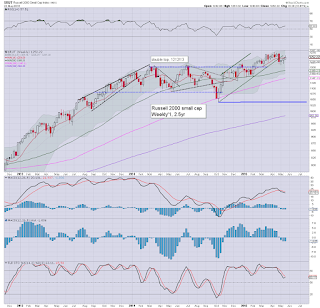 The second market leader saw the third consecutive net weekly gain, +0.7% @ 1252. Upper bol will be offering the 1290/1300s in early June. It is highly notable that underlying MACD cycle was negative for a third week, but is showing the initial sign of levelling out. In theory, the R2K could rally straight up from here across the summer, into the 1350/1400 zone. 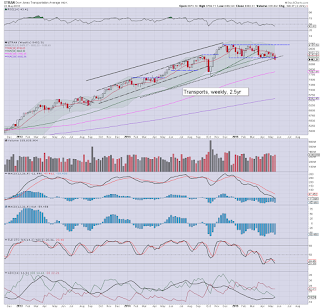 The 'old leader' continues to struggle, with a rather sig' net weekly decline of -2.3%, slipping into the 8400s, the lowest level since mid October. Underlying MACD cycle ticked lower, and remains at very depressed levels.

From a pure cyclical perspective, the Transports are due a new multi-week up cycle, at least to challenge the Nov' high of 9310. Any weekly close >9K this June/July, should offer a high probability of attaining the giant psy' level of 10K by late summer.

So, a bit of a mixed week in market land, but with three new historic index highs (if marginal) - Dow, Sp'500, NYSE comp', the broader trend for US equities remains bullish.

The weakness in the Transports certainly merits some attention, but is arguably negated by the new highs in other indexes.

Taken as a collective - and when taking into consideration the ongoing QE from central banks across the world, along with low rates, the US equity market looks set to rally across the summer.

The only wild card that would likely halt the bullish party is Greece, but then that has been the case since 2010. Taking short-term bearish positions on the 'hope of a GREXIT' looks overly risky.. and largely pointless.
--

A short week, but there is fair amount of scheduled data.

Friday will likely see some of the usual end month trading issues, expect some chop!

--
Back at the Tuesday open :)
Posted by Trading Sunset at 17:00:00
Email ThisBlogThis!Share to TwitterShare to FacebookShare to Pinterest 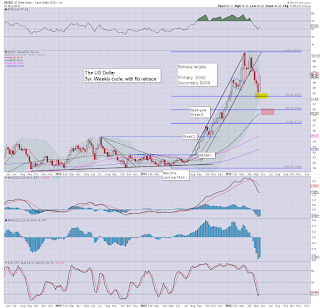 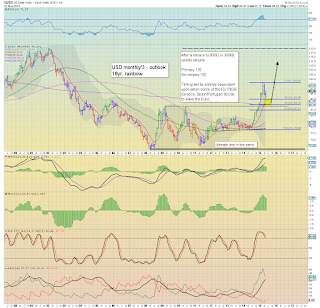 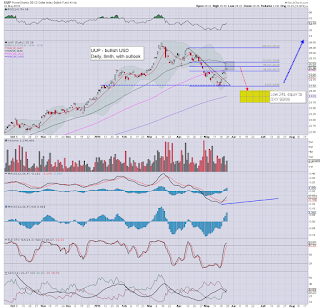 On any basis, I will look to be long USD - via UUP in the coming few months, although technically, any long-US equity position would certainly be a valid alternative for the rest of this year.

Despite what the 'dollar doomers' might wish to believe, the USD will remain King in the land of FIAT for some years to come.

US equities closed moderately weak, sp -4pts @ 2126. The two leaders - Trans/R2K, settled lower by -0.8% and -0.4% respectively. Near term outlook remains broadly bullish into the next FOMC of June 17th. 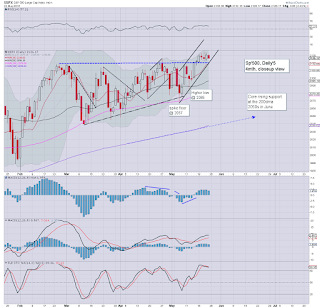 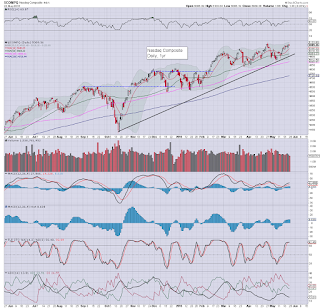 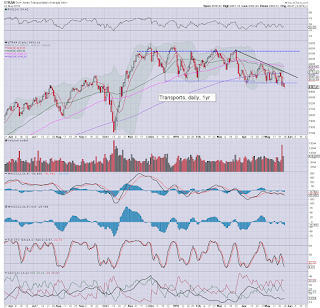 In contrast to the Trans, it was a week where the Dow/Sp'500 broke new historic highs of 18351 and 2134 respectively. On any basis...  a week for the equity bulls, as reflected in a VIX that can't even hold the low teens.
-