US equity indexes climbed for a second consecutive week, with net weekly gains ranging from 3.4% (Nasdaq comp', R2K), 2.3% (sp'500), to 1.3% (Transports). Near term outlook is extremely borderline, as the market remains broadly stuck within a narrow trading range of 2111-2025. 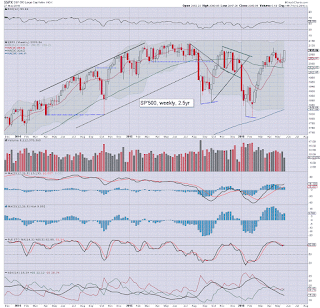 Underlying MACD (blue histogram) cycle is starting to tick higher again, but there will be high threat of a divergent lower high forming in first half of June. Right now, a bearish cross looks out of range for 3-4 weeks, which will (interestingly) line up with BREXIT week.

However, if equity bulls can break the Nov'2015 high of 2116, that would likely spiral to a new historic high, at which point the market will (from a pure technical perspective) be inclined to grind higher across the rest of the year.
-- 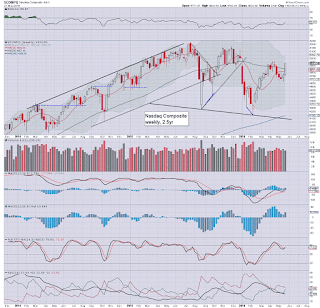 The tech' gained an impressive 3.4%, settling at 4933, teasingly close to the giant psy' level of 5K. Indeed, if equity bulls can break 5K in early June, it'll open the door to new historic highs (>5231) this summer. Equity bears really need to see renewed downside, back to the 4600s. 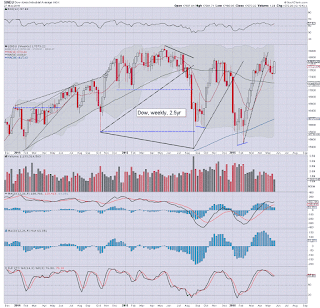 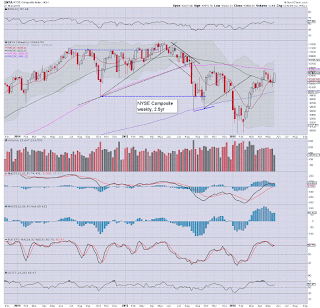 The master index gained 2.1%, settling @ 10469. A break into the 10600s would be very bullish, and suggestive that the main market is headed broadly higher across the rest of 2016. 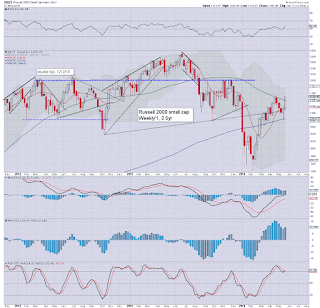 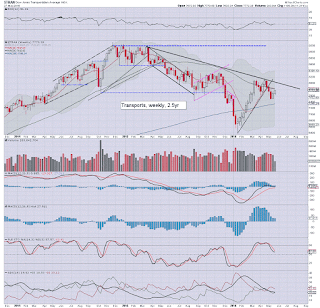 The 'old leader' - Trans, was the weakest index/sector this week, but still climbed a net 1.3% @ 7772. Declining trend/resistance will be around 8K in early June, and that will be a key level to keep in mind. If the equity bulls are willing to buy the Transports >8K (the 8200s to make it decisive), the broader bearish outlook will have to be dropped.
--

Unquestionably, a week for the equity bulls. Yet, broadly, the market remains stuck in the same range it has for much of the past year.

A short week of course, as the US market is closed on Monday, but there is plenty of key data due.

*the only scheduled fed officials are Powell and Evans on Thurs/Friday respectively.
--

If you have valued my postings since 2012, then support me via a subscription.

*I will return here on Tuesday, 7pm EST.
Posted by Trading Sunset at 17:00:00
Email ThisBlogThis!Share to TwitterShare to FacebookShare to Pinterest 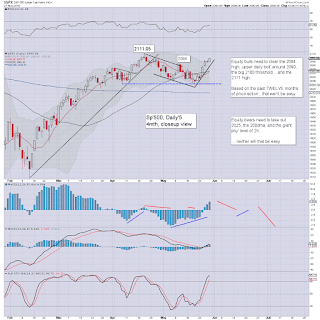 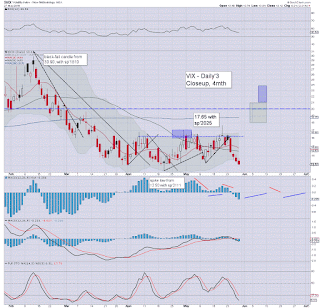 sp'500: the fourth net daily gain of the last seven trading days. A notable fourth day above the 50dma. Underlying MACD (blue bar histogram) is the highest it has been since late March - when sp' 2050s.


Update on the USD, weekly 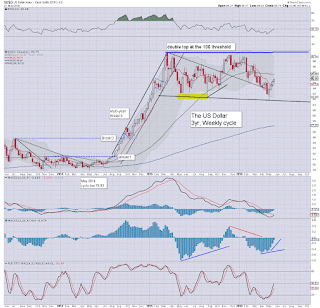 A fourth consecutive net weekly gain. Underlying MACD is set for a bullish cross at the Tuesday open, and the DXY 96/97s looks highly probable in June.

It is a curious thought as to when the mainstream will start getting twitchy about the strengthening dollar. Similarly, the 'dollar doomers', what are they going to say as the USD (as seems inevitable) breaks above the DXY 100 threshold.. and keeps on going?
--


A big move is coming

Many now recognise that a big move is coming. Either the market is going to see a massive breakout to new historic highs, or the recent rally from sp'2025 is just another tease to the bulls, before renewed significant downside in June.

My best guess?  Considering an array of threats - not least the BREXIT vote, I'm still leaning for another wave lower.

Clearly though, if we break >2111, that will likely lead >2134, in which case, the short side trade is arguably dead for the better part of a year or two.

Yours... trying to be open minded.

--
*the weekend post will appear here (as normal), Sat' 12pm EST, and will detail the US weekly indexes
Posted by Trading Sunset at 00:00:00
Email ThisBlogThis!Share to TwitterShare to FacebookShare to Pinterest
Newer Posts Older Posts Home
Subscribe to: Posts (Atom)