The main indexes climbed for a fourth consecutive week, most gained between 1.4 and 2.2%. The 'old leader' - Transports, managed an impressive 2.7%, and is now an astounding 34% higher since the November lows. There remains no sign of the current rally stalling.


Lets take our regular look at six of the main US indexes... 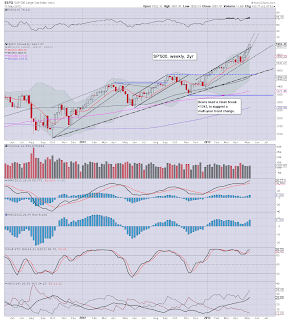 The sp' appears to be in an accelerated up trend, and we're seeing perhaps the strongest multi-week gains since the Oct'2011 low. Underlying MACD (blue bar histogram) ticked higher for a third week, and in theory, it could comfortably climb for another 3-5 weeks.

There is absolutely no sign of a turn/levelling phase. RSI is now 76, the highest since Feb'2011. Arguably the next obvious level is the psy'1700 threshold. That seems viable in June. 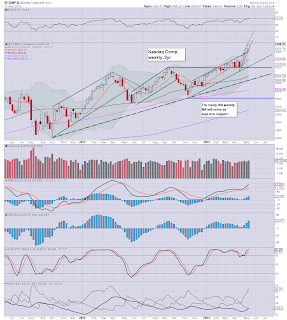 Like the SP', the Nasdaq is now in an accelerated trend higher. We're just 1pt away from the 3500s, and frankly, I'd have to guess we will see the 4000s this year. The only 'really crazy thought' is whether 5000 is possible by year end. If QE continues for the rest of this year, why would 5000s not be viable? 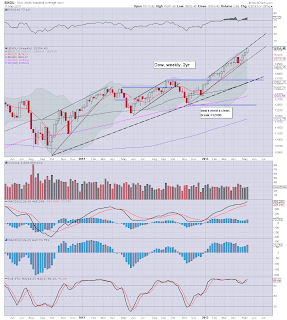 The mighty Dow has the most stable and consistent up trend of all indexes. It only managed a gain of 1.5% this week, but its relentless in its climb. No sign of a turn, and Dow 16k looks a given. Of particular note is that the bears could knock the Dow lower by 400/500pts, and it would do nothing to dent the broad up trend. 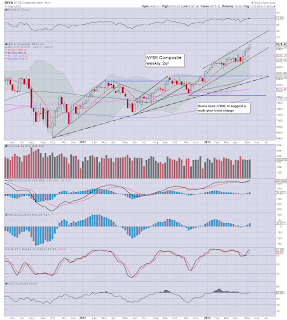 The master index only managed 1.4% this week, but looks well on its way to the big 10k. Nothing bearish here, and bulls have downside buffer of 4% or so. 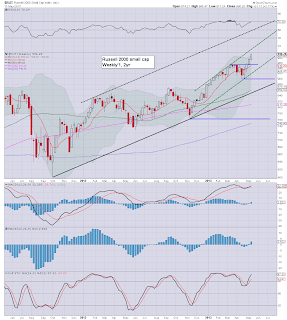 The R2K is a mere 5pts from hitting the psy' level of 1000. I've zero doubt it'll hit 1000, and probably proceed to the 1100s, perhaps 1200s later this summer. It remains a powerful index, and there is no reason why the current trend will end.  Bulls have downside buffer to around 950, which is 4% lower. 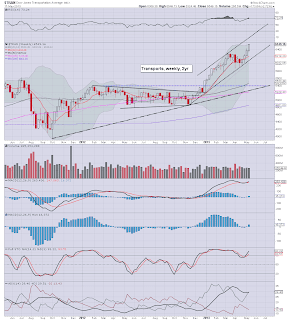 Tranny just keeps on pushing higher, and we're now in the mid 6500s. Primary target remains somewhere in the 7000/7200 range, which now seems very likely. So, another 10% to go.

The fourth week higher, and more than anything, there is no sign of ANY turn/levelling phase on any index. Since the failure in mid-April, the bears have absolutely nothing to cling to, and the main market is just battling higher.

This past Friday was again a classic example. We saw a touch of weakness on Thursday afternoon, but then Friday had 5bn of QE-pomo, and I'm pretty sure that was why Mr Market held up as well as it did.


Baring an end to QE

Unless..and until the Feds QE is terminated, I have no choice but to assume the 'hyper bullish' outlook. 'Annoying' doesn't even come close to expressing how I feel about the actions of central banks..but as ever...it is..what it is. There is little point complaining about the manipulation or destruction of 'true price discovery', but even more so, there is ZERO point in fighting it. Waste of time..and a waste of money. 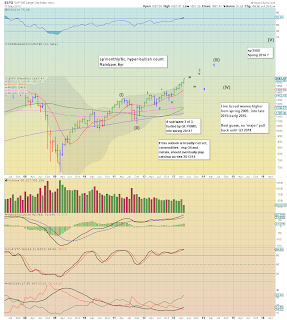 I'm not going to get too fixated on the exact count, but the above remains the best I can come up with. Its greatly shaped by the ECM cycle of Martin Armstrong, but also by seasonal factors, and of course, I am swayed by the dozens of other chartists I follow.

With ongoing QE, I have to assume the broad up trend will continue into spring 2014. Yes, there will be pull backs, but they will probably be like the one we saw in April (4%). Very swift..but so minor, as to not even be worth attempting to trade on the short side.

If QE does continue for the remainder of this year, then I'd have to guess we'll close the year in the 1800/1900s. I suppose 2000 is viable, but that seems more likely next spring.

My very best guess right now, assuming the world central banks all keep printing, the sp' will be trading around 2500/2750 by early 2016, before the next 12-18 month bear cycle occurs. So, the scariest outlook is the market might drop 50%, but it will be from a level, almost double from where we currently are.

Next week will probably be quieter, there isn't anything due on Mon/Tuesday. However, the big event of next week is...oh yes, its the Ben Bernanke, who will be testifying on Wednesday to the US congress on the US economic outlook. That will occupy all of the morning, later at 2pm, there are the FOMC minutes

Thursday has a few pieces of housing data, along with jobless claims, whilst the week ends with Durable Goods Orders. The following Monday is closed (US memorial day), so this coming Friday will probably be quiet.
--

To be clear, a 'minor' pull back of 2-4% is viable at any time - not that I think it is worth attempting to trade on the short side, but such a fall will do nothing to break the general upward trend, and so long as QE continues, it just looks like this year will be another one for the bears to forget. The Bernanke must indeed be very pleased with his 'wealth effect' work

back on Monday
Posted by Trading Sunset at 17:04:00
Email ThisBlogThis!Share to TwitterShare to FacebookShare to Pinterest

Another week higher for equities, and yet....another week lower for commodities. We are at the biggest divergence between the two in at least a decade. The obvious question is will commodities play catchup - as they did rather rapidly from spring 2007-summer 2008? 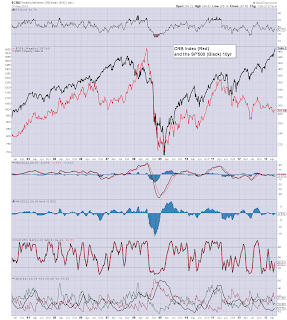 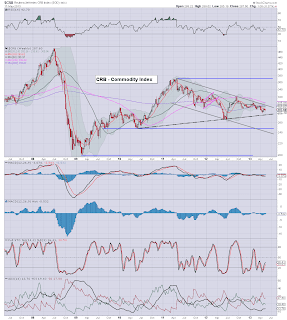 Considering the massive ramp in equity prices since the Oct' 2011 low of sp'1074, it is remarkable to reflect on just how weak commodity prices have been.

Obviously, the Feds 'QE/hot money' is not yet feeding its way into the commodity market. Yet, each month there are ever more 'benny bux' floating around in the US capital markets. Sooner or later, equities will become saturated, and the surplus money will start to flow into commodities.

I would guess a shift into commodities - especially Oil, could begin as early as this summer. Considering SP' is already in the mid 1600s, it is a little surprising that Oil hasn't already broken back above the big $100 threshold.

A weekly close for WTIC above $100, will easily open up $110, and then the more important $120s. Where it will get real difficult for the Fed to continue QE is with Oil in the 130s. If we do see a ramp in energy prices - whether this summer or next, its going to be real tough for the Fed to keep on printing.

Perhaps Oil in the 120/130s, along with headline jobless <7%, will be the excuse the Fed need to end, or at least trim, the current programs.

That's all for this week....goodnight from London
--

The US indexes closed the week on a high, with most indexes gaining around 1%. The transports and R2K lead the way with gains of 1.26 and 1.11% respectively. Near term trend shows no sign of levelling out, and the R2K looks set to hit 1000 next week. Incredible! 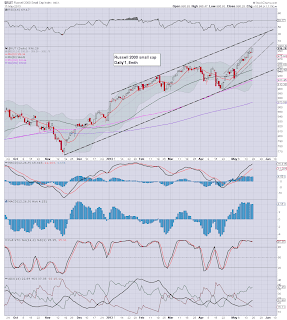 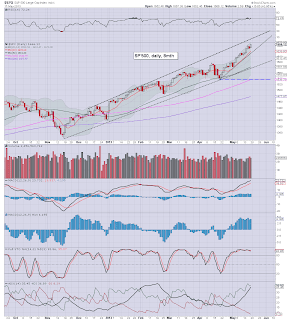 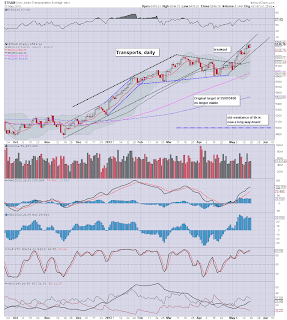 What can be said, other than incredible! Yet, why would we not be hitting new highs? After all, today saw an opex Qe-pomo of 5bn, and Mr Market sure made good use of that latest tranche of Bernanke Bux.

The fed money is keeping a strong bid under the market, and there is absolutely no reason why the Fed will end QE any time soon. I will note briefly - although its a major issue, so long as Oil prices remain 'reasonable' (under $130), the Fed should have no concern about things spiralling out of control.

Indeed, the fed looks more in control of things than ever before. All the Fed needs to do is issue a press release noting that it is 'considering' reducing QE, and you'd see an immediate cool down in just about every asset class.

The default trade obviously remains on the long side, or in the case of those bears who can't stomach going long..to just 'sit it out'. Until the current QE ends, there is simply no point being short the main market.