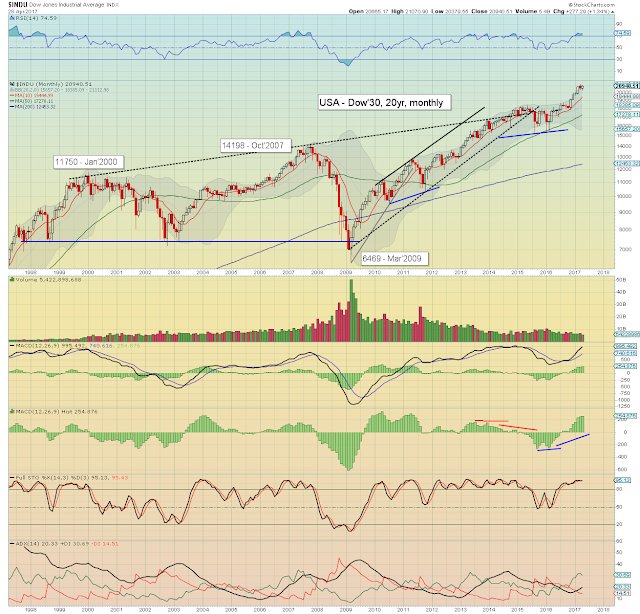 The mighty Dow climbed 277pts (1.3%), settling at 20940. Underlying MACD (green bar histogram) cycle ticked higher for a sixth consecutive month. The key 10MA will be close to the psy' level of 20k in May.

Best guess: broad upside to new historic highs (>21169) in May, or certainly by mid June - when the Fed are set to raise rates again. A year end close near 23k appears a very realistic target, which would equate to the sp'2650/700 zone.

Equity bears have nothing to tout unless a break and monthly close under the key 10MA.
-- 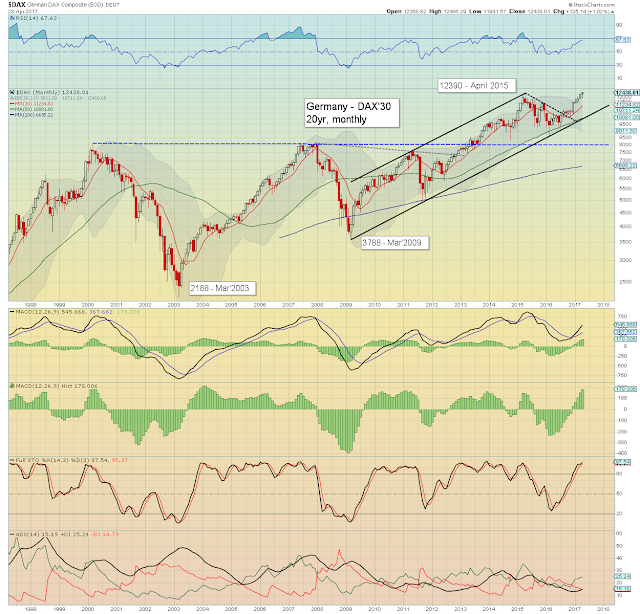 The economic powerhouse of the EU - Germany, climbed for a fifth consecutive month, settling +1.0% at 12438. There was a decisive break above the April 2015 high, with a notable new historic high of 12486. The 13000s appear a realistic target this summer. The only issue is whether an acceleration in the upward trend to the 14000s by year end. 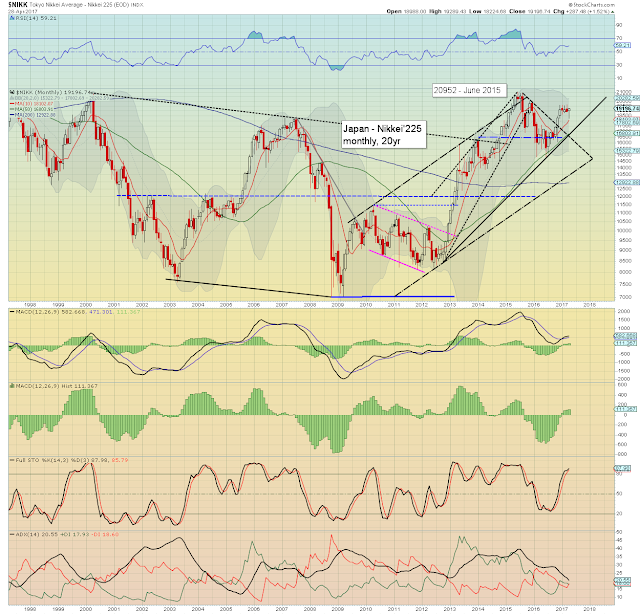 The BoJ fueled Nikkei saw some choppy price action, with an intra low of 18224, but settling +1.5% at 19196. The monthly candle is pretty bullish, with a very spiky floor, indicative of further upside. First big target is the 20k threshold, and then the June 2015 high of 20952. A year end close in the 21000s appears a valid target, as the global QE printing presses continue to spin. 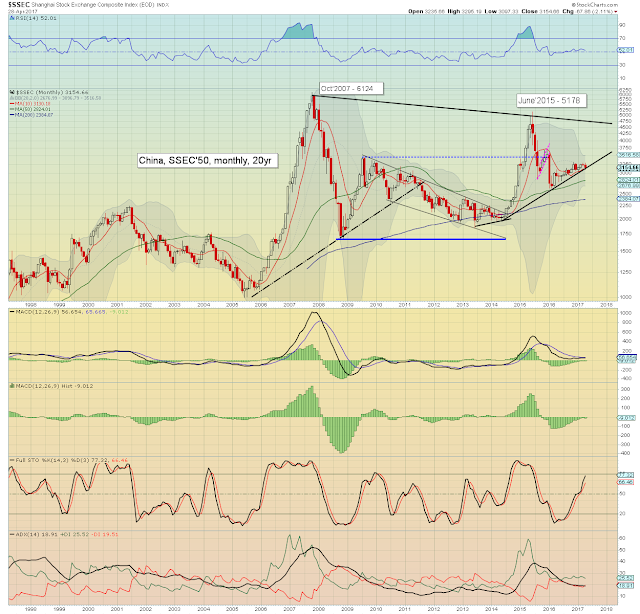 The Chinese equity market was the big laggard in April, with a net decline of -2.1% to 3154. Despite a weak close, this was still above the key 10MA, with price action having been choppy since the Nov'2016 high of 3301. Equity bulls need to see some price action >3300 to offer the 3500s, where the upper bollinger will act as strong resistance. Any monthly closes >3600 will offer a powerful surge to challenge the June 2015 high of 5178, and right now, that is a massive 64% higher. 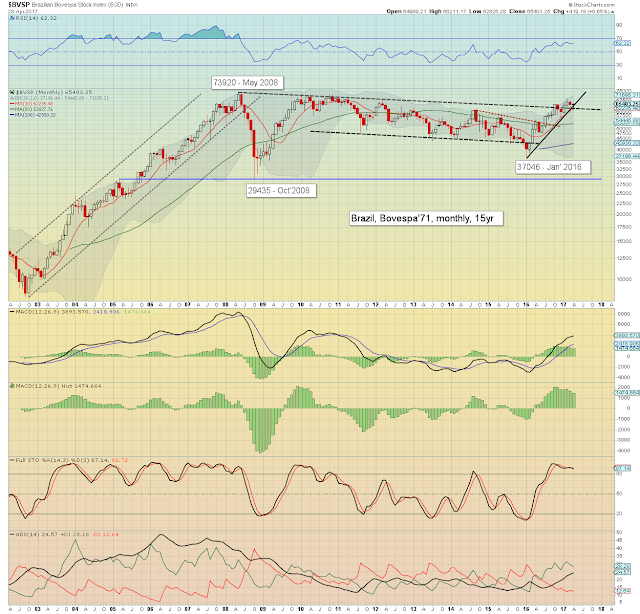 The Brazilian market saw a choppy month, settling moderately higher, +0.6% to 65403. The April close was notably above the key 10MA, and the monthly candle was somewhat spiky, suggestive of further upside. Having already broken above massive multi-year resistance, first big target remains the May 2008 high of 73920, and that looks viable before year end. As ever, Brazilian equities will be particularly dependent upon commodity prices. 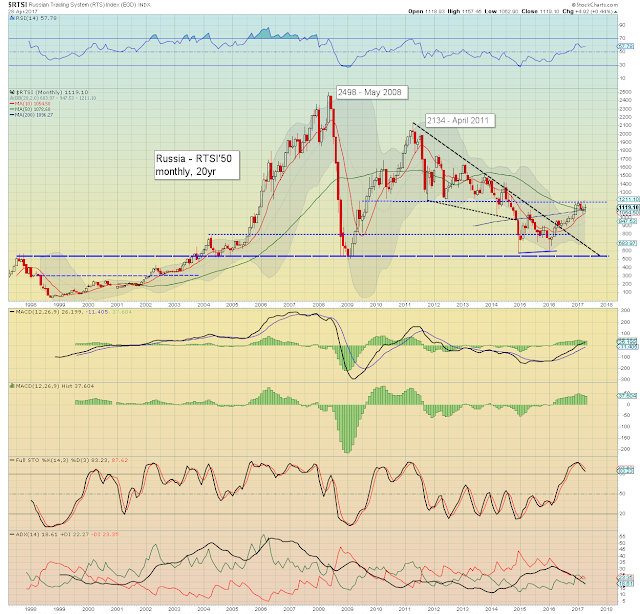 It was a month of chop for Russian equities, with the RTSI settling net higher by 0.4% to 1119. Price structure since the Jan' high of 1194 is arguably a bull flag, which will be provisionally confirmed with any price action in the 1200s. Any break into the 1200s will offer grander upside to the 1500/1700 zone. The Russian market will be greatly swayed by oil/gas prices. 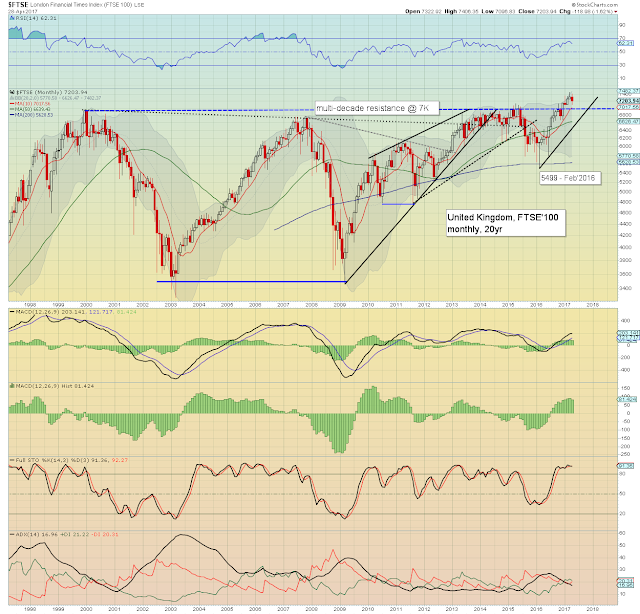 The UK equity market saw a choppy month, leaning weak into end month, settling -1.6% at 7203. The surprise announcement of an election (June 8th'), is a temporary cloud over the market. The result is not an issue though, with the current ruling conservative party set to massively increase their control of the nation, who will then hold power into 2022.

The 7k threshold - once multi-decade resistance, is now core support. Considering other world markets, the FTSE'100 should be able to hold 7k, and push to new historic highs, whether in May, or shortly after the election. The 8000s look highly probable before year end. Talk of 'FTSE 10k' is valid. 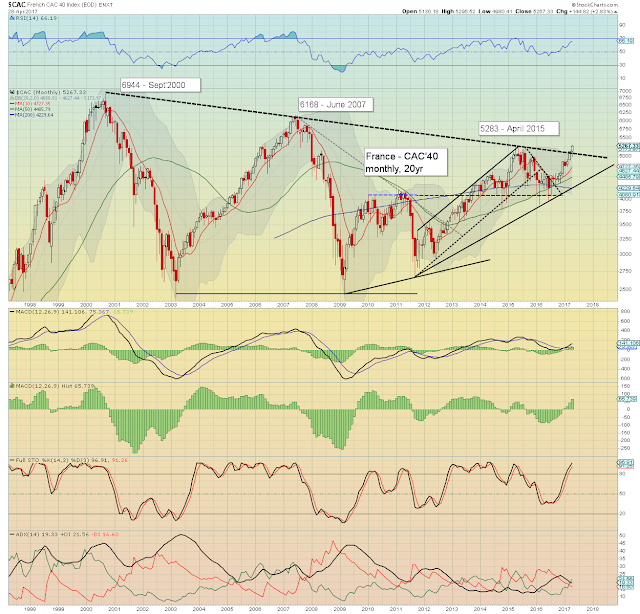 March saw a provisional break above multi-year declining trend/resistance, with the French market seeing a decisive breakout, +2.8% to 5267. Its notable that the intra high of 5296 broke the April 2015 high. Next upside target is the June'07 high of 6168, which does appear highly probable before year end.

As for the election - round'2, May 7th, it would seem Macron will win against Le Pen. Its increasingly difficult to see Le Pen seizing 1 in 2 of the French electorate. Even if there is a Le Pen victory, the equity outcome would arguably be much like the Trump event. Any initial weakness would be quickly reversed.

Keep in mind the ECB printers are still spinning, as Draghi is extremely reluctant to tighten monetary policy. French equities are certainly benefiting from the new money, much of which is inevitably going to find a home within equities. 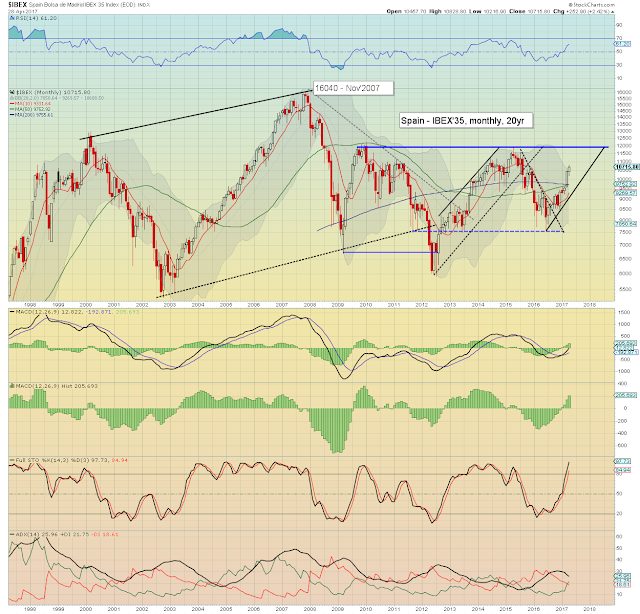 Spanish equities continue to power upward, with the IBEX climbing for a third consecutive month, +2.4% to 10715. First big target remains the 12k threshold, which is another 12% higher. Any monthly closes >12k will offer 15/16k, before the rally that began in July 2012 from 5905, has a realistic chance to conclude.. 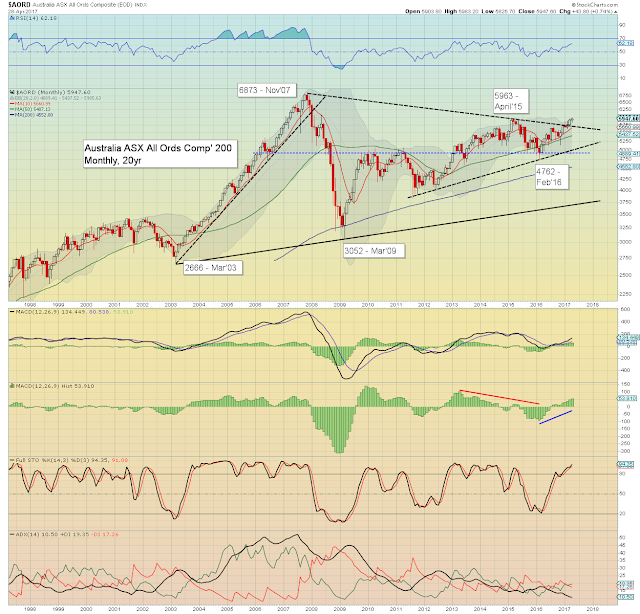 The German market was especially strong in April, seeing a new historic high.

The breakouts in the French and Australian markets are extremely important, and have very bullish implications for other markets.

In addition to further corp' earnings...

FOMC announcement @ 2pm. No change in policy is expected. There may be some chatter about reducing the balance sheet later this year. There will NOT be a press' conf'.

*there are a truckload of Fed officials set to appear on Friday, notably Fischer and Bullard - speaking at a monetary policy conf' in Stanford.

If you value my work, you can support me via a monthly subscription. For $20pcm, you will get access to my continuing intraday posts, which total 220/240 a month. Or you could buy one share of AMZN in about 4-5 years time.

*the next post on this page will likely appear Monday May 1st at 7pm EST
Posted by Trading Sunset at 17:00:00
Email ThisBlogThis!Share to TwitterShare to FacebookShare to Pinterest

A month for the bulls

US equity indexes closed broadly weak, sp -4pts at 2384. The two leaders - Trans/R2K, settled lower by -1.0% and -1.2% respectively. VIX settled  Near term outlook offers renewed upside into the sp'2400s, as corp' earnings and econ-data continue to come in 'reasonable'. 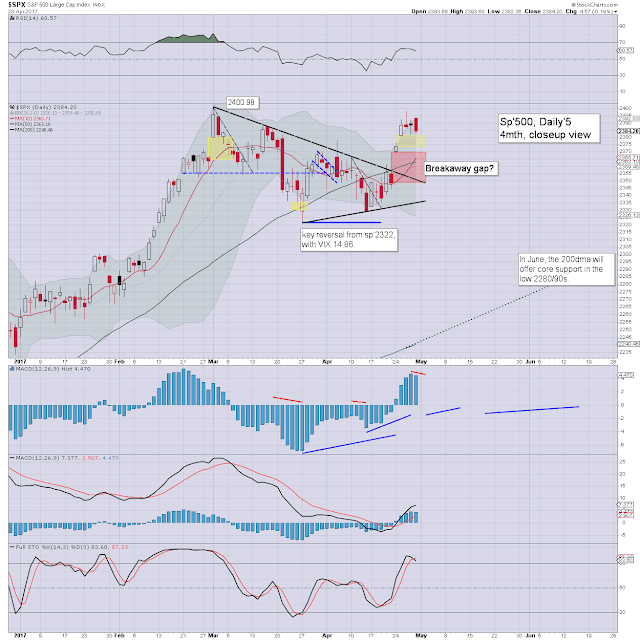 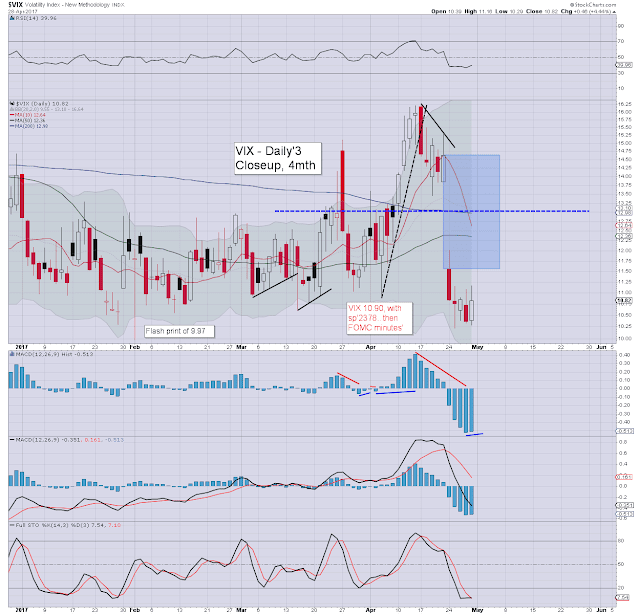 It was a day of moderate chop for US equities, leaning on the weaker side. Its notable that the Nasdaq comp' managed yet another new historic high. The two leaders did close sig' lower, but they do tend to move twice the amount that the headline indexes do.

Market volatility floored in the low 10s in the morning, and increased into the afternoon. A brief foray to VIX 12 seems probable next Monday.. if sp'2374. The low teens look out of range until next Thurs/Friday.
- 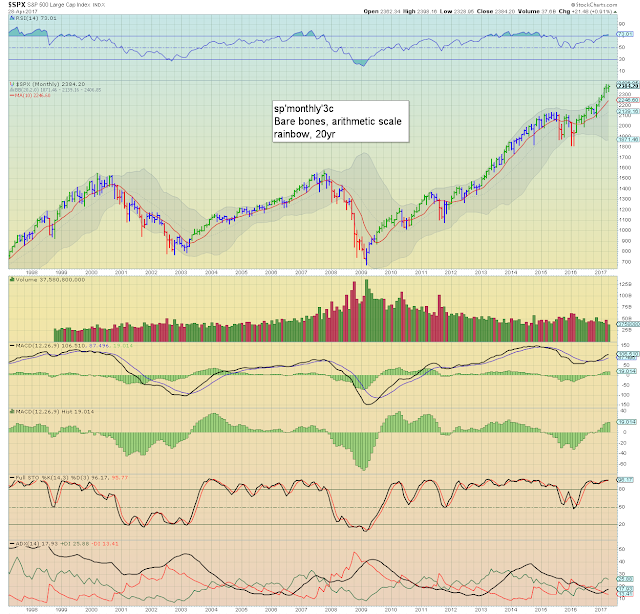 Here in the metropolis of cranes... 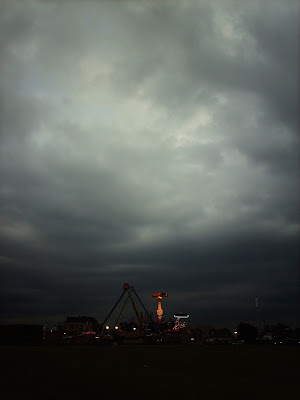 This market is no fun ride for those still bearish.

*the weekend post will appear Sat' 12pm EST, and will detail the World monthly indexes.... and it remains my most important post each month.
Posted by Trading Sunset at 00:00:00
Email ThisBlogThis!Share to TwitterShare to FacebookShare to Pinterest
Newer Posts Older Posts Home
Subscribe to: Posts (Atom)