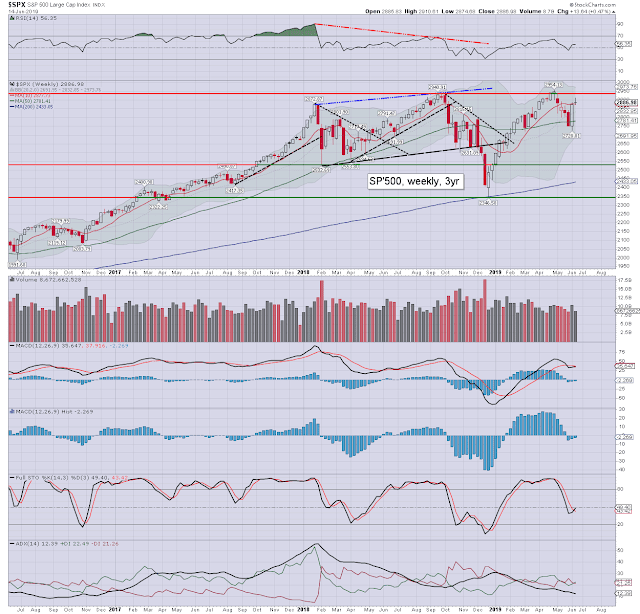 First support is the 2800 threshold, with an open gap of 2762/44. Note the lower weekly bollinger at 2691, which will jump/adjust to around 2719 with next Monday's open. Its going to be very difficult to see any price action <2700 for the remainder of June.

If June settles back under the monthly 10MA - currently at 2780, it will offer the 2675/50 zone in July. Monthly support in July will be around 2560. If we're anywhere near the latter, Print Central might even be inclined for the 50bps cut that Kudlow (and some notable others) have been calling for.
-- 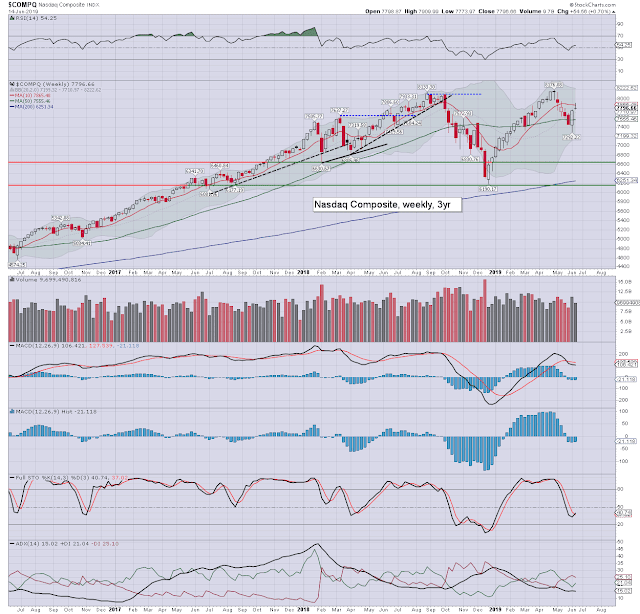 The Nasdaq gained 54pts (0.7%) to 7796. Its notable that despite a two week bounce, weekly price momentum remains moderately negative. 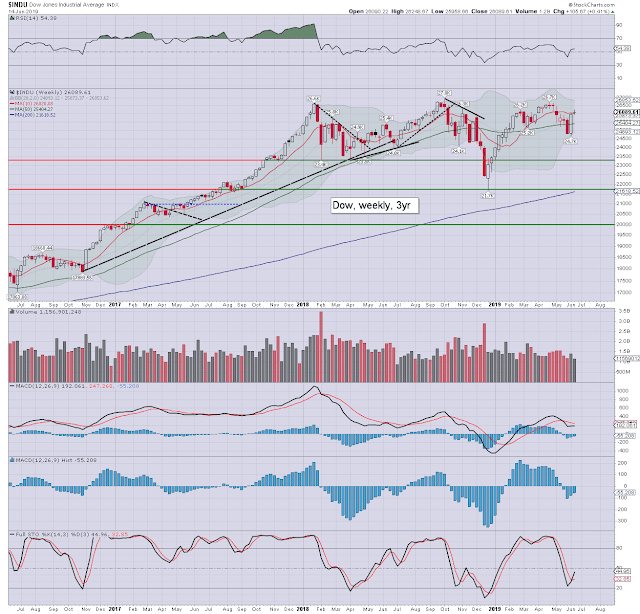 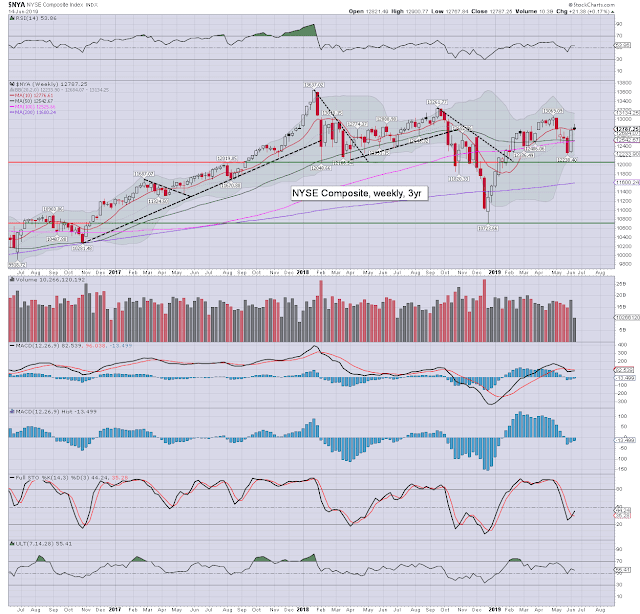 The master index settled +21pts (0.2%) to 12787, and that made for a black candle, which leans s/t bearish. Note the last such black candle in late February, with the following week in early March not so great for the bulls. 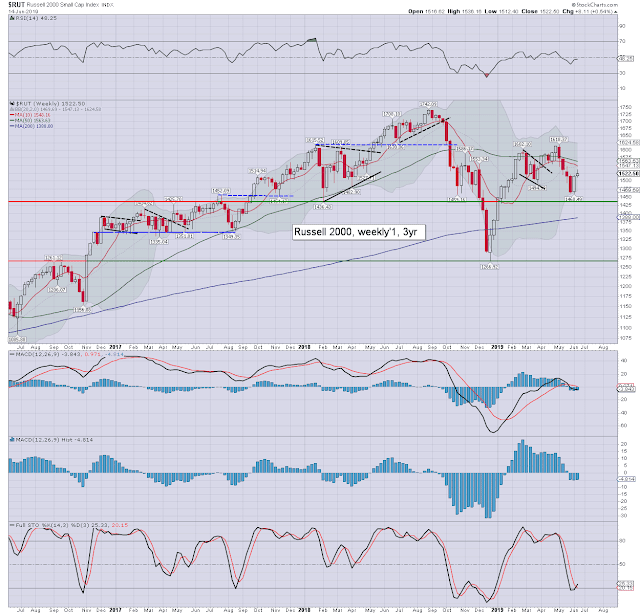 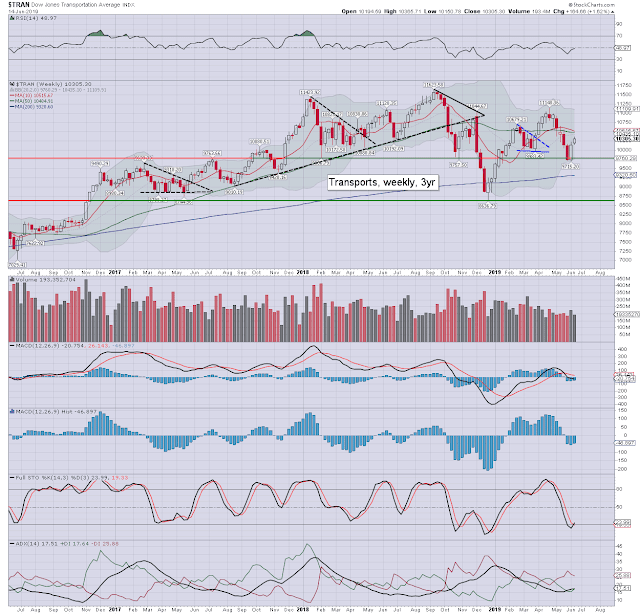 The 'old leader' - Transports, lead the way higher this week, +164pts (1.6%) to 10305. Weekly price momentum remains negative. There are multiple aspects of resistance within the 10400/600s. It is notable that if WTIC screams higher on any US/Iran confrontation, the transportation stocks would be hit especially hard on fuel/cost concerns.
–

The transports lead the way higher, with the NYSE comp' lagging.

Its very notable that despite a second week of gains, the Transports and R2K are still trading under their respective monthly key 10MA. I don't call them the 'two leaders' for nothing. Both are suggestive other indexes are to be seen as vulnerable in the remaining ten trading days of June.

*FOMC announcement (2pm). I do not expect any change in rates, although its possible the QT program - currently due to be wound down by end Sept', will be moved forward to end July, or even end June. Powell will host a press conf' at 2.30pm, and he can be expected to threaten rate cuts 'if necessary'.

*As Friday is quad-opex, expect increasing price chop on much higher volume.
--

Whilst a rate cut doesn't look due until the July 31st FOMC, the market is going to be obsessing over every single word from the monetary masters of Print Central. Powell has a tough task to retain some degree of credibility, whilst also sweet talking the mainstream cheerleaders.

Price action next week should be more dynamic. Both the equity and vix daily cyclical setup will increasingly favour the equity bears next week, especially from Thursday onward. However, even if we drop to the sp'2800 threshold, that won't be enough to negate the recent bounce back above key monthly support.

Arguably, the bolder s/t traders will be short just ahead of the fed, with a basic target of sp'2800. The more cautious bulls will wait to see how the market trades and settles next Wednesday. Any daily close >2910 would be where the more cautious bulls could chase (not least in such stocks as DIS, MSFT, LULU, or even AMD).

Regardless of your short, mid, or long term view, it should be clear, we're already way beyond the twilight zone, as things are more crazy with each day.