With low volume holiday trading, the main indexes melted higher, and the VIX melted a little lower, falling 1% to 15.14. A bizarrely low VIX, in a very strange and delusional market. 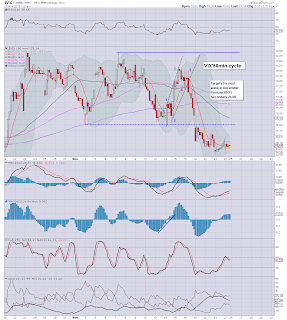 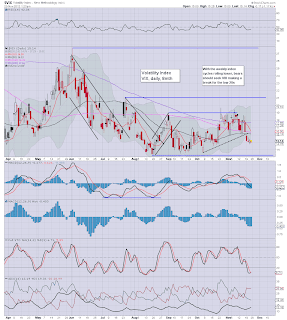 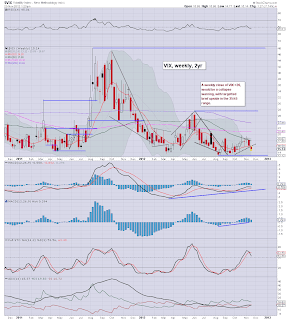 Across the week, the VIX declined by almost 8%, and we're now getting pretty close to the lows of early October.
-

Near term, the VIX remains exceptionally low, and is arguably reflecting almost 100% complacency by Mr Market.

Were anything 'bad' to happen, the near term VIX would explode a very easy 25/30%, but then, that still wouldn't get it to 20. Incredible!

More later.
Posted by Trading Sunset at 21:00:00
Email ThisBlogThis!Share to TwitterShare to FacebookShare to Pinterest

A nasty little micro-ramp in the closing hour, doubtless annoying those few bears who were trying to catch the top...too early. We're less than a point away from the base of my sp'1410/25 target zone. 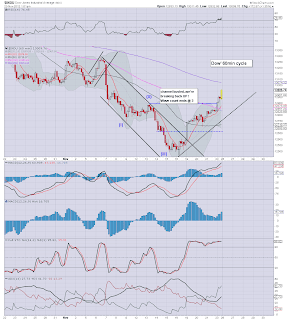 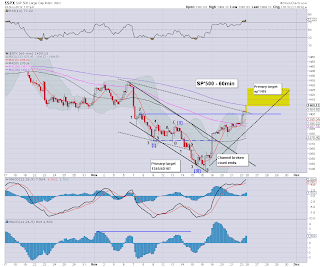 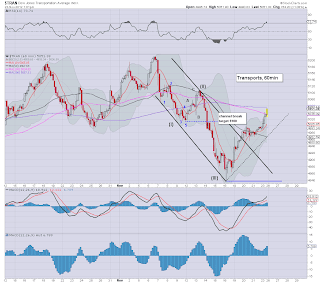 On days like today, the bears just have to stay out of the way, and let the algo-bots do their nonsense. Its not like we've never seen this madness before. It was to be expected.

Next week should see further gains, but a reversal is seemingly inevitable towards the end of the week.

a few minor bits and pieces across the evening.
--
I'll post a weekend update, late Saturday.

Have a good weekend!
Posted by Trading Sunset at 18:03:00
Email ThisBlogThis!Share to TwitterShare to FacebookShare to Pinterest

It is that time of year when the animals go shopping. I could say a lot of things about this sickly scene, but I think the following video - which I believe is from earlier today, is a very fair summary of what is going on at the lowest level of the US consumer economy. 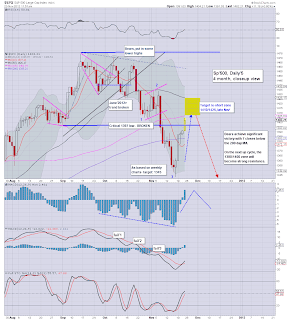 So we've hit sp'1404, thats starting to convince everyone we're now set for a full on Santa rally, possibly into the sp'1500s by year end.

Certainly, we're not quite seeing the bullish hysteria I was looking for on the clown network finance TV, but we'll probably see it next week, if we're trading in the 1420s.
--

Back after the close..which is at 1pm.
Posted by Trading Sunset at 16:53:00
Email ThisBlogThis!Share to TwitterShare to FacebookShare to Pinterest

11am update - as expected

This certainly has turned out to be a pretty classic holiday reversal. The market was trading at sp'1343 last Friday, and here we are...sp'1403, thats not bad for low volume algo-bot melt, with a sprinkling of short-stop cascades. 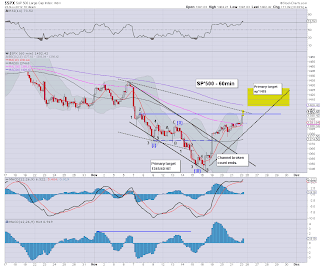 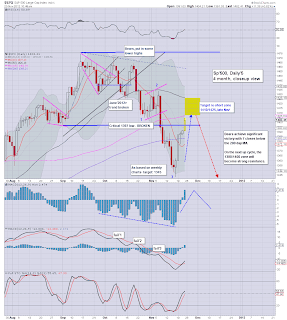 I sure am glad I side stepped all of this nonsense, and that IS what it is.

Nothing has changed from last Friday, and yet we are now a full 4% higher.

Maybe we'll put in a double top next week at 1410
--
back at 12pm..for more 'melt'.
Posted by Trading Sunset at 15:51:00
Email ThisBlogThis!Share to TwitterShare to FacebookShare to Pinterest

Well, its one of those weird days where it really is best to just turn your screen off, and go for a walk or something. There is no point trading this nonsense until next week. 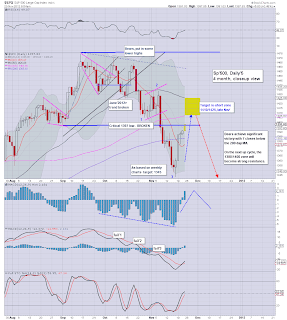 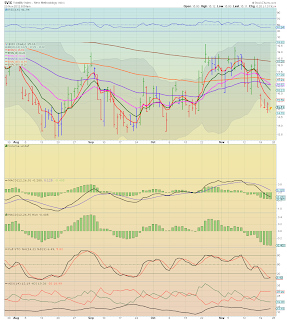 Just reflect upon the fact that this time last week we were trading in the low 1340s !
--

I still expect higher levels early next week. Whether we get stuck at 1410..25..or even higher, difficult to say.

What is clear, we're headed UP. Bears should be sitting back...oh so patiently!
--

back at 11am
Posted by Trading Sunset at 14:56:00
Email ThisBlogThis!Share to TwitterShare to FacebookShare to Pinterest

Good morning. Futures are sp +4pts, we're set to open around 1395. Another very quiet trading day is likely, where the algo-bots will again be in full control, for some slow motion melt to the upside. Today is a shortened session, we close at 1pm 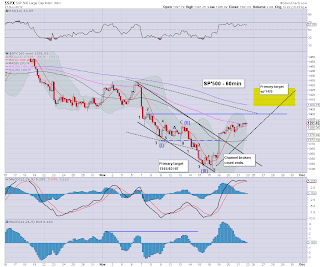 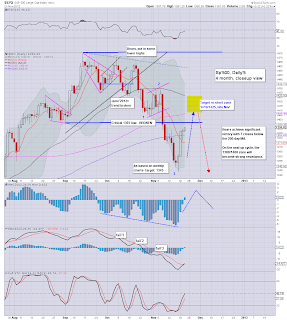 There really is no reason for this market to open today, not least for a mere half day.

A close around sp'1400 seems very viable, and then we'll be just 10pts away from the low end of my re-short target zone!

I am content to watch, at least until Monday.
Posted by Trading Sunset at 13:44:00
Email ThisBlogThis!Share to TwitterShare to FacebookShare to Pinterest

Oil prices have remained rather low considering the recent disturbances in the middle east. The likely reason though is clear, the global economy remains weak, especially the western economies. If WTIC Oil breaks the recent low of $84, there could be a very long way yet to fall. 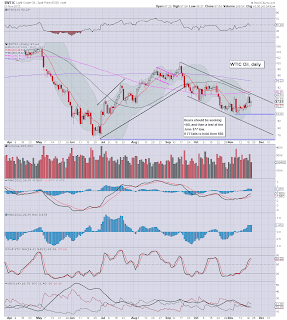 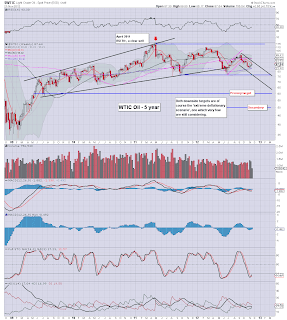 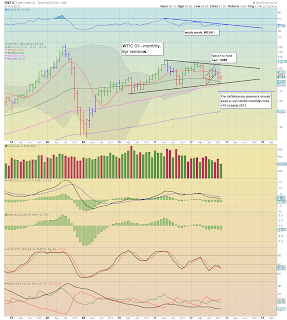 Oil has been creeping up slowly in the past two weeks, from $84 to the current $87.64. I'd guess 89/90 is viable by next Wed/Thursday. From there, I'd most certainly look for a rollover, and then the only issue is whether $84 is taken out.

If 84 fails to hold, then a re-test of the June low of $77 will seemingly be likely, and if that fails...then my primary target of $60 will back on the horizon, to be hit sometime in late spring 2013.

In terms of global price deflation, there is no question that demand is weaker than most have expected, and despite the recent middle eastern flare up, it has really amounted to very little, and hence WTIC Oil hasn't seen much of a spike higher. Certainly, the big $100 is almost 15% higher from where we are.

So, keep a close eye on Oil, it remains the foundation for the world economy, and if the price breaks back into the 70s, it would be very suggestive of continued global economic weakness.
-- 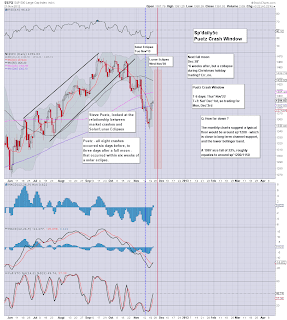 The Puetz crash window opened today, and (arguably) expires around Monday December 3rd. I read around a great deal, and I am most certainly not the only one keeping this unquestionably kooky issue in mind.

Lets be clear though, I am NOT currently trading this window. Right now, I don't have any positions, long or short! As I've said many times, I'm sitting out this holiday week, and I'll let the algo-bots trade amongst themselves.

However, I am somewhat 'curious' about Monday Dec'3rd, not least if we do see what I believe to be a  wave'2 bounce that should be complete late next week.
--

As for Friday, I'm guessing on balance, we'll just see more melt higher, although its very possible we'll also gap open, as much as 1% higher, so don't be surprised if we're lurking around sp'1405/10 by 1pm tomorrow - which is when we will see an early closing time.