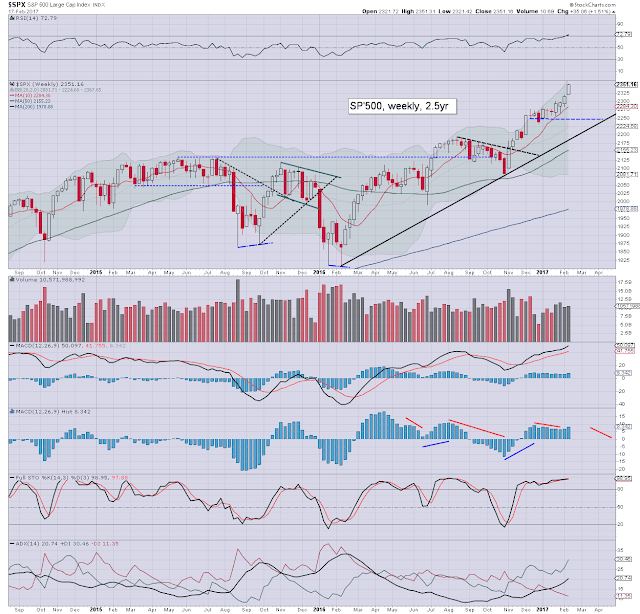 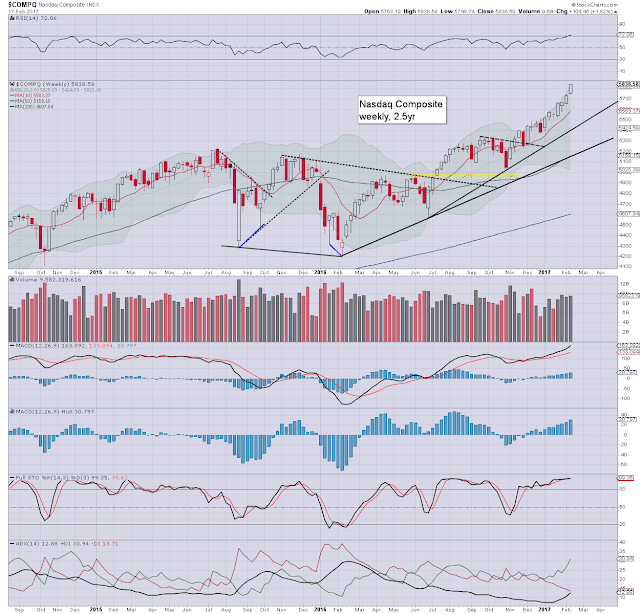 The tech continues to lead the way higher, with a fourth consecutive net weekly gain, +104pts (1.8%) to a new historic high of 5838. The 6000s remain on track, and talk can begin of the 7000s by late summer/autumn. The giant psy' level of 5K looks secure for a very long time. 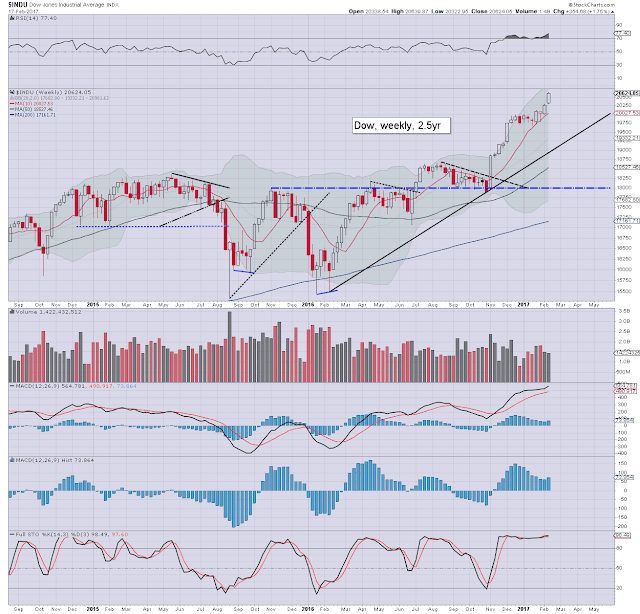 The mighty Dow saw the third significant net weekly gain of the past four weeks, +354pts (1.7%), at 20624, having seen a new historic high of 20639. The 21k threshold is now a valid target into early March. From there, a 5% retrace will see the giant psy' level of 20k act as first support. Secondary support of 19k looks like it will hold for the rest of the year. A year end target of 23/24k is realistic. 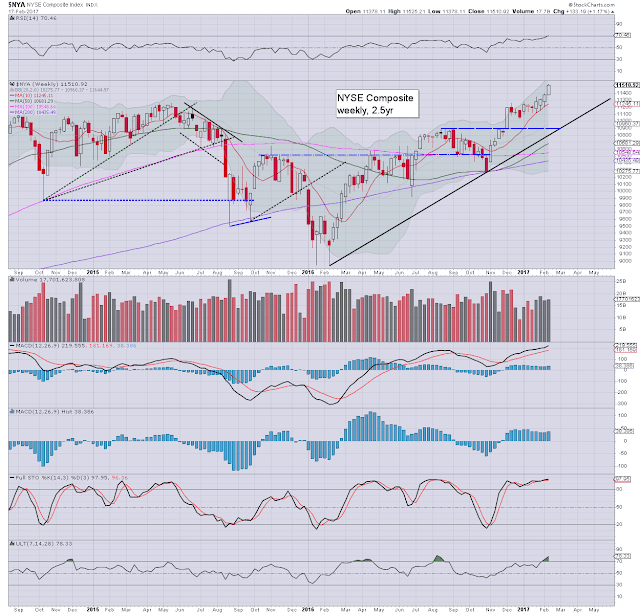 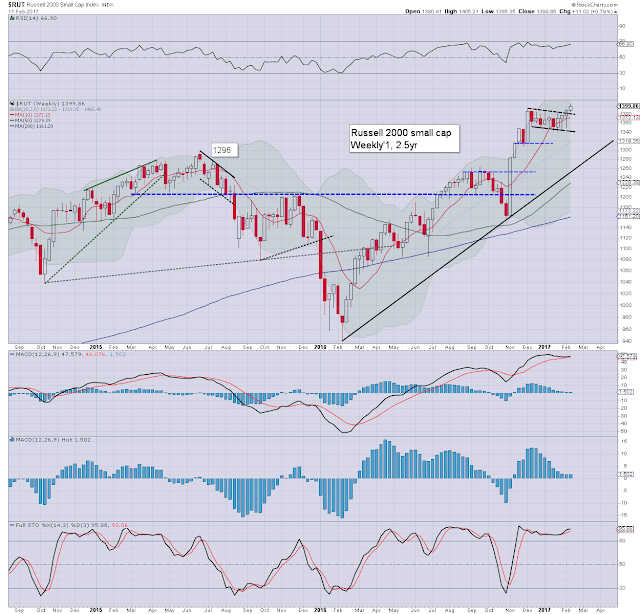 The second market leader - R2K, settled higher for a fourth week, +11pts (0.8%) at 1399. With a new historic high of 1405, price structure of a giant bull flag has been fully confirmed. The upper bollinger is offering the 1460s, which is another 4% higher. The 1500s look out of range until the broader market first retraces by around 5%. 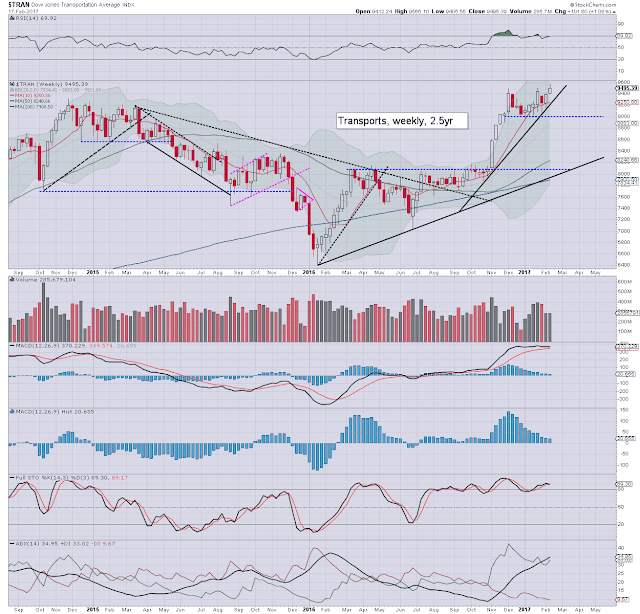 The 'old leader' - Transports, settled higher for a second consecutive week, +1.1% @ 9495, having broken a new historic high of 9566. First soft support is the 9k threshold, and its entirely possible that will hold with a main market retrace. Trans 10k looks a given this spring, with 12/13k a valid target for year end.
--

The market could see a retrace of 5%, and it would not even test core rising trend, or the key monthly 10MA.

Most US equity indexes look to have a viable 15/20% of upside by year end. That will arguably require 3 rate hikes (May, Sept, and Dec'), WTIC oil >$60, and no major geo-political turmoil.
--

There will be earnings from the retail sector, including: HD and M (Tuesday), JWN, GPS (Thurs'), JCP (Fri')

It will be a short four day week, and there isn't much scheduled.

*there are five fed officials on the loose, but since the election of Trump, the market places far less importance on their comments.
--


If you like these posts, and think I'm worth at least $1 per trading day, then subscribe, which will give you access to my continued intraday posts.

*the next post on this page will likely appear Tuesday at 7pm EST
Posted by Trading Sunset at 17:00:00
Email ThisBlogThis!Share to TwitterShare to FacebookShare to Pinterest 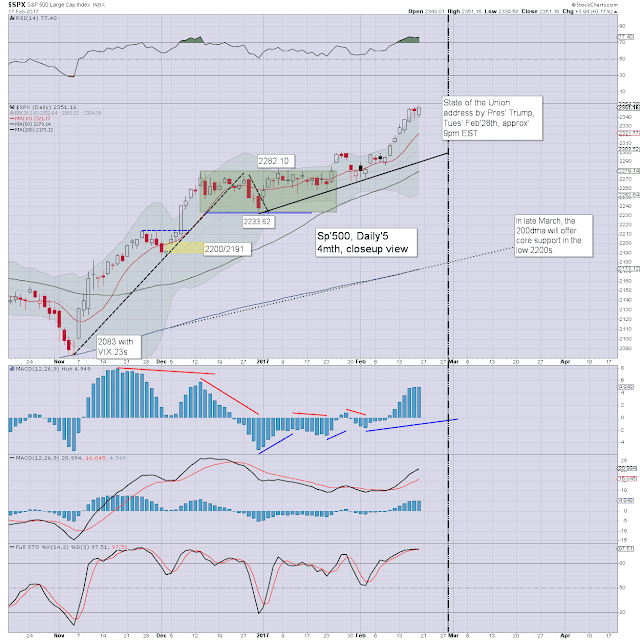 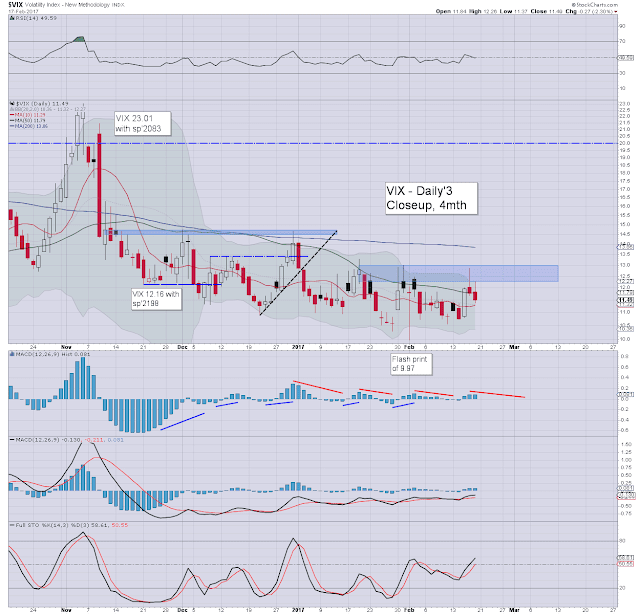 It was a day of minor chop... but that was natural, as it was opex.. ahead of a three day weekend. Most notable.. the Nasdaq comp', which managed a new historic high into the close.

Volatility remains subdued, and it was almost surprising that VIX did not settle the week in the 10s.

The weekend post will appear Sat' 12pm EST, and will detail the US weekly indexes.
Posted by Trading Sunset at 00:00:00
Email ThisBlogThis!Share to TwitterShare to FacebookShare to Pinterest
Newer Posts Older Posts Home
Subscribe to: Posts (Atom)