The equity market saw a rather quiet day. Meanwhile, in VIX land, volatility was higher for almost the entire day, closing +2% @ 15.44. However, such tiny moves are to be considered as 'mere noise', with the VIX remaining at what is a bizarrely complacent level. 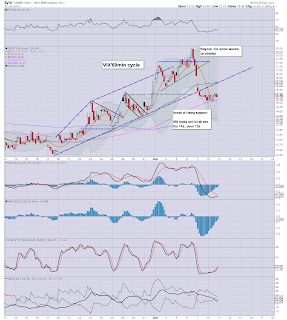 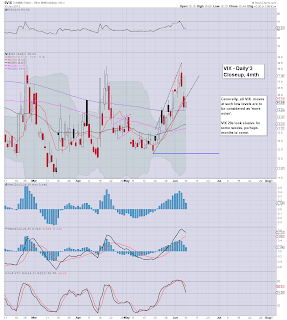 Today's move was so minor, that very little can be discerned from it.

What is clear though, the daily MACD (blue bar histogram) ticked lower for a third day, and looks set to go negative cycle by late Tuesday or Wednesday.

Bears have a real problem with the VIX daily trend like this.

A very quiet day to start the week, with the sp' hitting a high of 1648, shortly after early lows of 1639. Precious metals held slight gains, whilst Oil failed to claw back to evens. VIX closed a touch higher, but the gain was arguably mere noise. 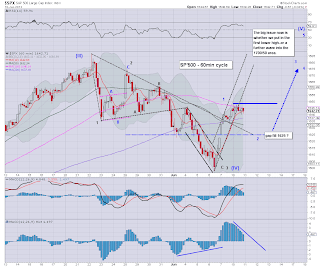 Kinda dull wasn't it? Oh well, the open gave the bulls a chance to exit (as I did), and the low of the day came just 30mins later.

Hourly charts are suggestive of 'some weakness' early Tuesday, but that will be difficult with the daily charts swinging increasingly back in favour of the bulls.
--

*I am mostly back on the sidelines, seeking a better index long-entry tomorrow, preferably in the 1625/22 area, although that sure looks difficult, with the bears generally weak.
--

bits and pieces across the evening.
Posted by Trading Sunset at 21:00:00
Email ThisBlogThis!Share to TwitterShare to FacebookShare to Pinterest

The hourly index charts are warning of downside into late Tuesday morning, with a prime gap-fill target of sp'1625/22. Daily index charts are still swaying in favour of the bulls though, and a weekly close in the 1660s still looks very feasible. 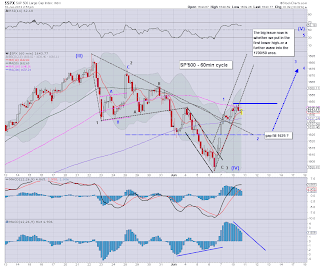 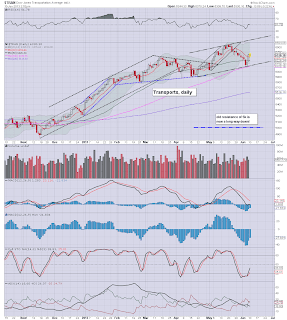 It remains largely minor chop, with a slight pressure to the upside. Considering we were at 1598 just over two trading days ago, the bulls are holding the gains very well.

Transports..market leader is holding together.
--

*I remain largely on the sidelines.

Seeking to re-long @ 1625 tomorrow -if available, although if the mood out there is overly shaky, I'll sit it out.
Posted by Trading Sunset at 19:53:00
Email ThisBlogThis!Share to TwitterShare to FacebookShare to Pinterest

Mr Market remains subdued, there just isn't much of anything going on. An early morning Tuesday gap-fill in the sp'1625/22 range seems possible, so long as we close <1648. Metals are holding small gains, Oil is still battling to close green. 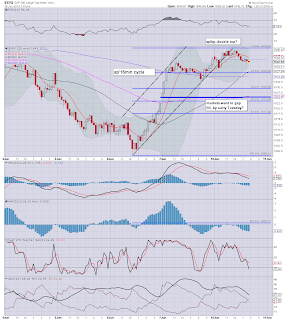 If we do drop tomorrow down to that level, and show some stability, then its arguably buying time again on the long side.
--

Until then, there doesn't seem to be any point in getting involved.
Posted by Trading Sunset at 18:52:00
Email ThisBlogThis!Share to TwitterShare to FacebookShare to Pinterest

Market is looking real tired on the micro-cycles. The sp'1635 level looks viable this afternoon, and there remains an obvious gap around 1625. Volume is light, and no doubt that is helping the bots to melt things higher at times. 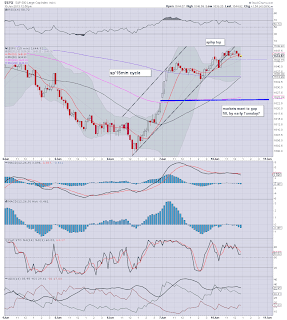 A choppy..and messy day. Arguably..one to just step away from.

-
If we are trading in the mid 1620s tomorrow, it will be interesting to see how big a bounce we get.

*I remain largely on the sidelines now, and will see how we trade Tuesday morning. Arguably, it remains a 'go long'.

Bulls are without any QE-pomo help until Thursday though, so its kinda interesting to see how the market copes without it.

It would seem few expect the VIX back under 14 for very long.
Posted by Trading Sunset at 17:50:00
Email ThisBlogThis!Share to TwitterShare to FacebookShare to Pinterest

With no real econ-news, and no significant QE today, Mr Market appears somewhat lost. Underlying pressure however is increasing to the upside, with the daily charts suggesting upside across the week. Metals are building slight gains, Oil is almost back to flat. 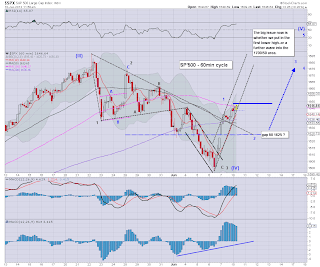 Way too risky to short..probably for at least a week or two. Bears got to be super patient again.
-

I will continue to keep in mind the sp'1625 gap, but it doesn't look like the bears are going to be able to manage that.
Posted by Trading Sunset at 16:53:00
Email ThisBlogThis!Share to TwitterShare to FacebookShare to Pinterest

The indexes start the week very mixed. Opening gains, then moderate losses, and now we're back up again. Daily charts suggest sustained..and increasing pressure to the upside. Bears appear to lack any power again, despite no significant QE today, nor Tue/Wed. 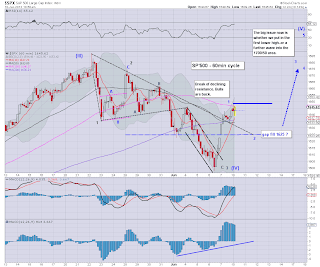 There is an obvious gap in the sp'1625 area, yet that simply might not get filled in this up cycle.
-

Certainly, its too risky to short, and frankly..going long right now....not today, thanks
--
Posted by Trading Sunset at 15:51:00
Email ThisBlogThis!Share to TwitterShare to FacebookShare to Pinterest

The market opens higher, but the gains have quickly failed, with the R2K already moderately red. VIX is a little higher, but it remains a fearless market. Daily trends remain ticking higher, and price momentum is still turning back to the bulls. 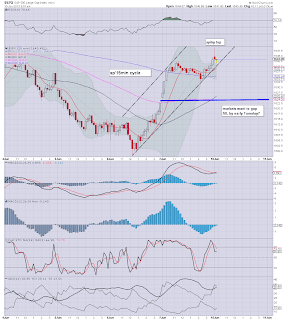 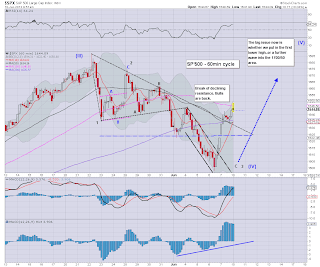 So...a minor jump at the open, but its failed. Hard to guess how many hours this might fall, but hourly chart is now arguably due to fall.

Near term trend is STILL up, but a fall back to the 1625 area looks viable, no later than early Tuesday.
--

*I exited index longs at the open. All I've got left is MRO (long), will look to drop that later this week.
--

Oil was indeed weak in pre-market, and it looks like it could fall for most of today, even a few days - although that will be hard if main market broadly rises. 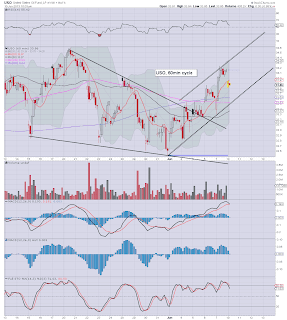 This open really looked weak (hence me bailing), and a fall - by early Tuesday to 1625 looks very viable now.

No doubt some bears are getting a little excited out there, but I think they'll be really mad as hell by the end of this week.

The time for a major down cycle..just does'nt seem yet.

A real messy start to the week.

I'm reminded of the phrase 'don't trust a Monday'.
Posted by Trading Sunset at 14:52:00
Email ThisBlogThis!Share to TwitterShare to FacebookShare to Pinterest

Good morning. Futures are a touch higher, sp +2pts, we're set to open around 1645. First target for the bulls this morning is the 1650/52 area, then its open air to the low 1670s later in the week. Precious metals are a little higher, whilst Oil is somewhat weak. 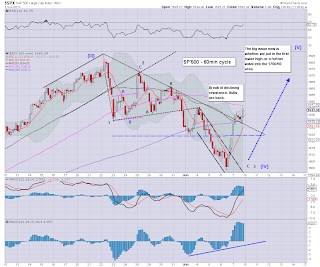 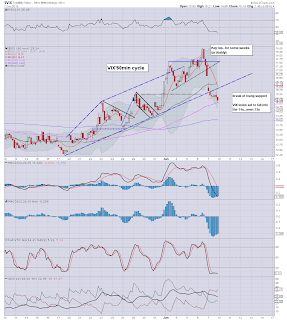 So, we're set to open a touch higher. Those bears seeking a significant gap lower are obviously going to be annoyed, before the week has even started.

*Nikkei closed up almost 5%, which is the biggest move in over two years (according to ZH). I'm kinda surprised US futures aren't much higher.
--

Today is arguably day'3 of a new up cycle. As I will keep stating, the big issue now is whether we put in our first lower high, or break >1687.

Considering the primary trend is still up, you'd have to default to the bullish side.

As ever though, one day..at a time.

--
*I am heavy long, seeking an initial exit this morning, and will look to go long again late in the day/early Tuesday

We could easily just keep going up into 11am, but I want out.
Posted by Trading Sunset at 13:08:00
Email ThisBlogThis!Share to TwitterShare to FacebookShare to Pinterest
Newer Posts Older Posts Home
Subscribe to: Posts (Atom)