With equities starting a new week with significant net daily gains, the VIX was crushed across the day, settling -.8.9% @ 12.20. Near term outlook is borderline, as the equity bulls are now battling to break above the recent marginally lower high of sp'2112. 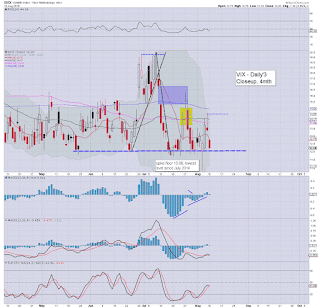 VIX remains very subdued. The big 20 threshold looks out of range until the sp'500 loses the 2000 threshold, and that sure doesn't look likely in the near term.

*I remain long VIX.. and this trade is starting to get a little annoying. I have little interest in exiting until the 15/16s.
-- 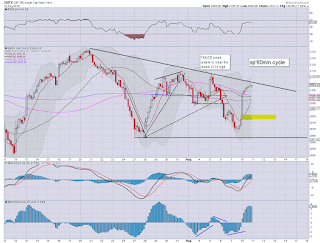 *moderate chop in the closing hour.
--

A tiresome and frustrating day to begin the week.

Considering we're just 1.5% away from a new historic high, it remains bizarre how twitchy the mainstream generally are.

more later.. on the VIX
Posted by Trading Sunset at 21:02:00
Email ThisBlogThis!Share to TwitterShare to FacebookShare to Pinterest

US equities are set to close significantly higher, and regardless of whether the market settles a touch above.. or below the sp'2100 threshold, the bears face major problems if sustained price action across Tue/Wed' >2115. Gold and Oil are both holding sig' gains of 1.0% and 2.3% respectively. 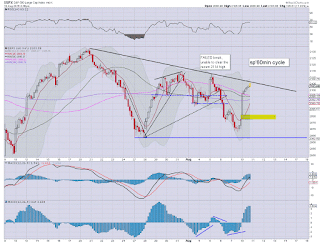 For now.. it remains arguably just a bounce.. but clearly.. we're within 0.5% of breaking a higher high in the short term.

If you're on the short side and thought your day was difficult...

--
Changable skies in London city this evening.. much like my mood... 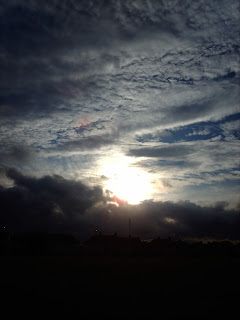 The particularly depressing aspect is that summer will be wrapping up in around four weeks.

--
back at the close.
Posted by Trading Sunset at 19:50:00
Email ThisBlogThis!Share to TwitterShare to FacebookShare to Pinterest

US equities continue to claw higher, with a new intra high of sp'2103, with VIX in the low 12s. Metals are holding sig' gains, Gold +$12, with Silver +3.6%. Miners are similarly holding most of the gains, the ETF of GDX +4.4%. Broadly though, metals/miners do not look floored on a multi-year basis. 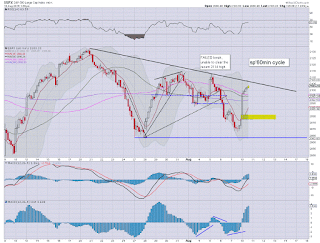 Clearly, the mainstream is back to 'new highs are coming' mantra.... and extremely relieved the Dow won't fall for an 8th day.

I'm still guessing.. this is a mere bounce.
--
Posted by Trading Sunset at 18:54:00
Email ThisBlogThis!Share to TwitterShare to FacebookShare to Pinterest

US equity indexes are looking stuck around the sp'2100 threshold. Clearly, the bulls would achieve a provisional victory on a daily close in the sp'2100s.. a mere 1.7% from breaking a new historic high. VIX remains extremely subdued, -7% in the 12.40s. 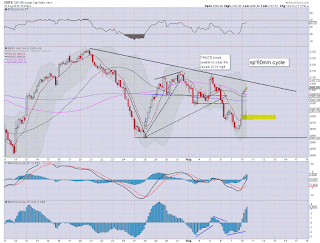 Well, the hourly cycle is still powering upward. Clear resistance - as at today's close will be 2106.

Any Tuesday gap into the 2110s would be even more of a problem than the nonsense we saw last Wednesday.

For now though.. by definition, today's move remains a bounce... unless a higher high is achieved.
-- 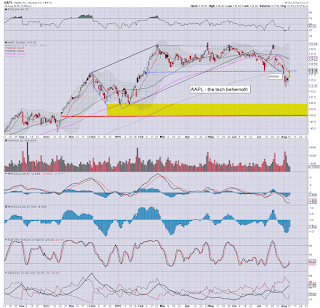 With the daily cycle clearly broken though.. this is arguably a near perfect bounce..back to the old broken floor.
-


--
:)
Posted by Trading Sunset at 17:57:00
Email ThisBlogThis!Share to TwitterShare to FacebookShare to Pinterest

US equities are continuing to build on opening gains, with an intra high of sp'2102, along with VIX 12.29. The precious metals have caught a particularly strong bid this morning, Gold +$15, with Silver +3.8%. The related miners are naturally spiralling upward, with the ETF of GDX +5.0%. 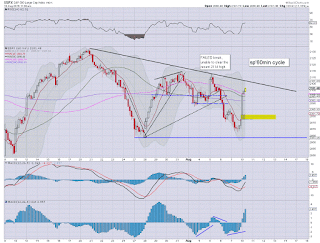 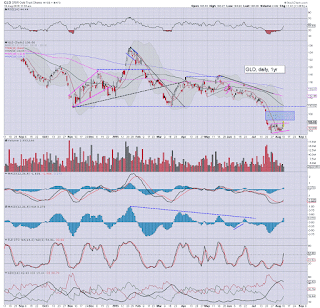 *No doubt some in the gold bug community will be getting overly excited at this mornings sharp gains, yet this mornings gains do nothing to change the broader trend.

As for the broader equity market.. its clearly a strong start to the week for the bulls, but overall market mood sure doesn't suggest these gains will hold across the week.. never mind be built upon.
--


-
time for tea.
Posted by Trading Sunset at 16:54:00
Email ThisBlogThis!Share to TwitterShare to FacebookShare to Pinterest

US equities are holding significant gains, with the sp'500 on the edge of the 2100 threshold. Equity bull maniacs need a daily close >2114 to open the door to new historic highs. Considering the broader weekly/monthly cycles though.. nothing has changed, and the price momentum continues to swing toward the bears. 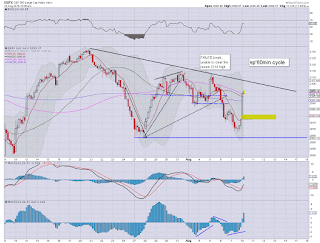 Again.. the critical issue is whether a break >2114 is achieved. 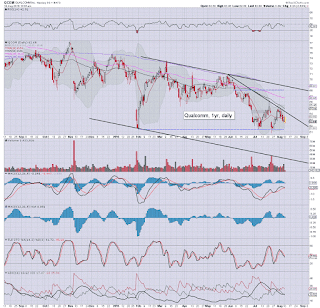 A rather ugly chart... repeated rally fails last week... sub $60s look due.
Posted by Trading Sunset at 15:55:00
Email ThisBlogThis!Share to TwitterShare to FacebookShare to Pinterest

US equities are building significant gains, with another attempt to break and hold above the sp'2100 threshold. VIX is naturally crushed lower into the mid 12s. With the USD +0.1% in the DXY 97.70s, commodities are mixed.. Gold +$3, whilst Oil remains weak, -0.4%. 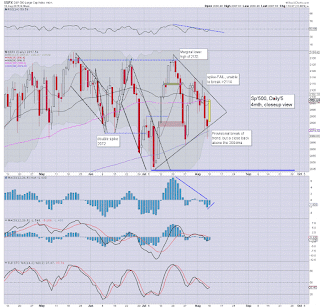 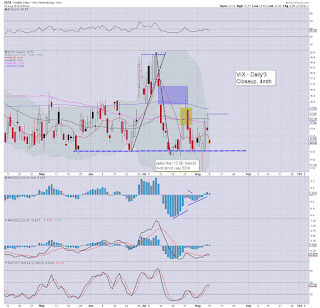 Last week was all about repeated rally fails.

This week is simply a case of whether the market can break >2114. 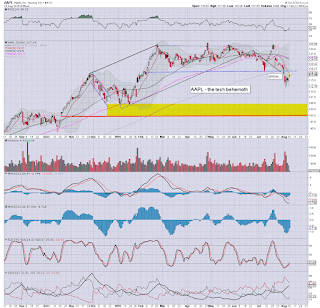 Arguably back testing the old (broken) floor... whilst price structure is a bear flag. Bears should be seeking no daily closes in the $120s.  AAPL is certainly a stock to watch.. as an indicator for the broader market direction.

--
notable weakness: TSLA -1.3%.. as talk continues that every car sale is a loss making sale.

QCOM -0.4%.. nothing significant, but it does standout from most stocks this morning.
Posted by Trading Sunset at 14:50:00
Email ThisBlogThis!Share to TwitterShare to FacebookShare to Pinterest 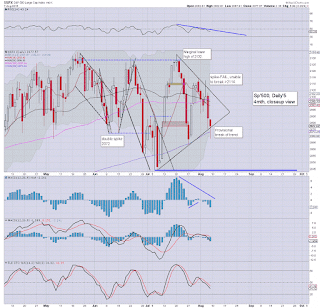 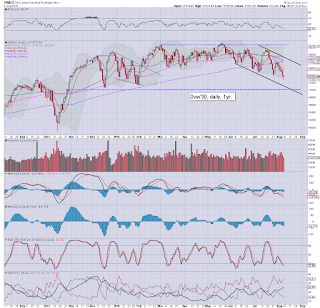 So... we're set to open higher, but then... that was the case last Monday, Tue', Wed', and Thursday, and that didn't work out so well for the bulls.

Lets see where we are around 11am... and then I will be looking for some weakness for rest of the day.

Dow 17K, along with sp'2040s, are both near term targets, and considering the recent repeated rally failings, I remain broadly bearish.

--
Overnight China action. The Shanghai comp' saw broad gains build across the Monday session, settling +4.9% @ 3928. The gains are the strongest seen in some time, but with the SSEC already close to the 4K level, will some dare sell.. despite threats from the China leadership?
-

Frankly, its more of the same nonsense from a rather standard 'dollar doomer'.

Every time Holter wears that hat in an interview, Gold loses $1. I remain holding to the big $1000 threshold. However, with the USD set to break >DXY 100, the 120s will then be due, and that is going to really hinder the metals.

Ohh, and as for those death crosses. I realise some will dismiss them.. after all, they are very lagging indicators, but still.. they are indicative of most indexes having been stuck for many months... and are now breaking new lows.

Have a good Monday.
-

8.34am.. It would seem the bonus futures pop is due to some story that the Greek banks are going to get some more money thrown at them in the near term.

Yeah.. clearly, all is well in Greece again. Nothing for the Greeks to be concerned about. Now they can go to their local bank and make use of all the savings they have. Oh wait.... yeah.. capital controls.... still.
Posted by Trading Sunset at 12:51:00
Email ThisBlogThis!Share to TwitterShare to FacebookShare to Pinterest
Newer Posts Older Posts Home
Subscribe to: Posts (Atom)