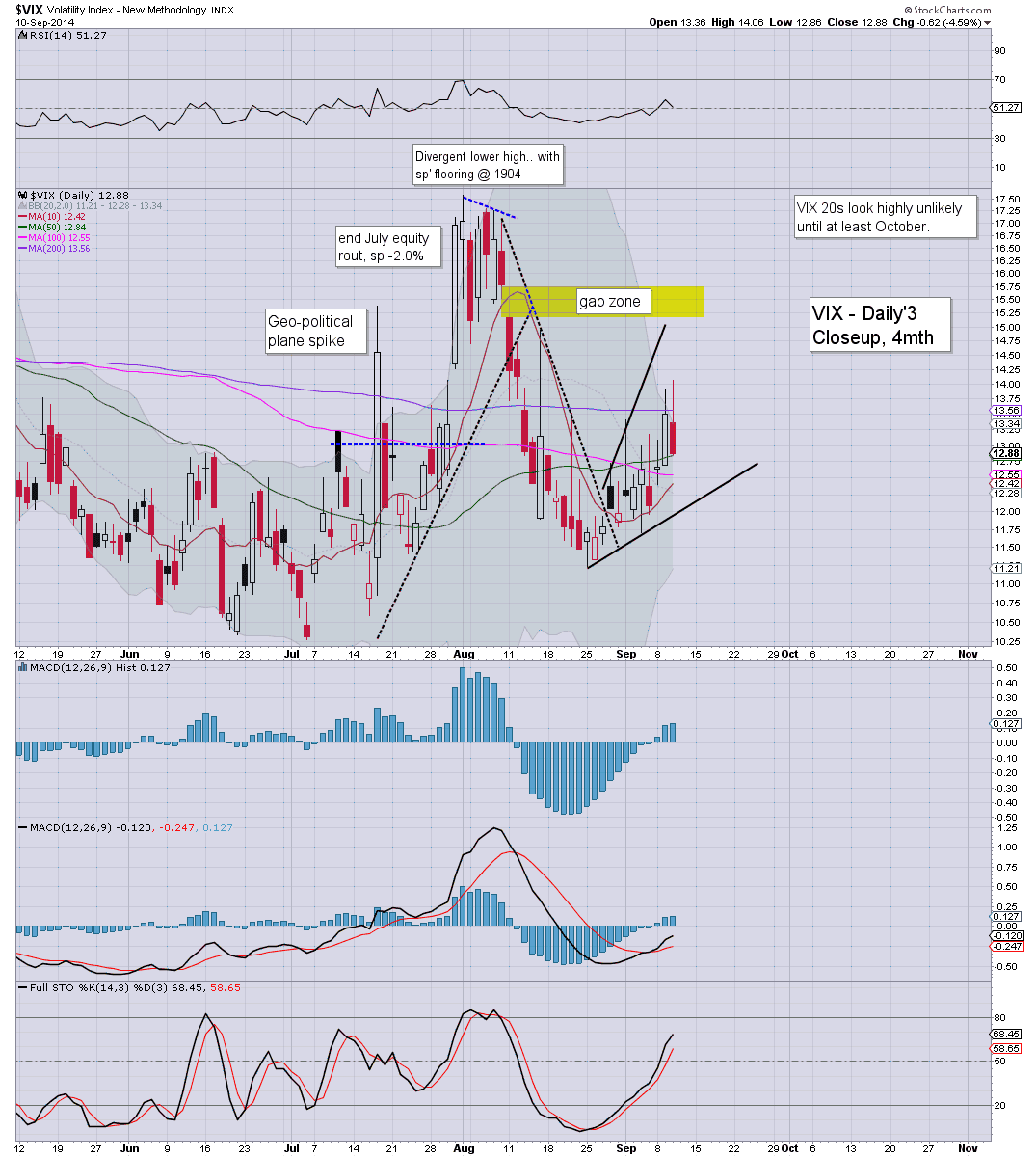 On any reasonable outlook, VIX 20s look unlikely in the near term.
- 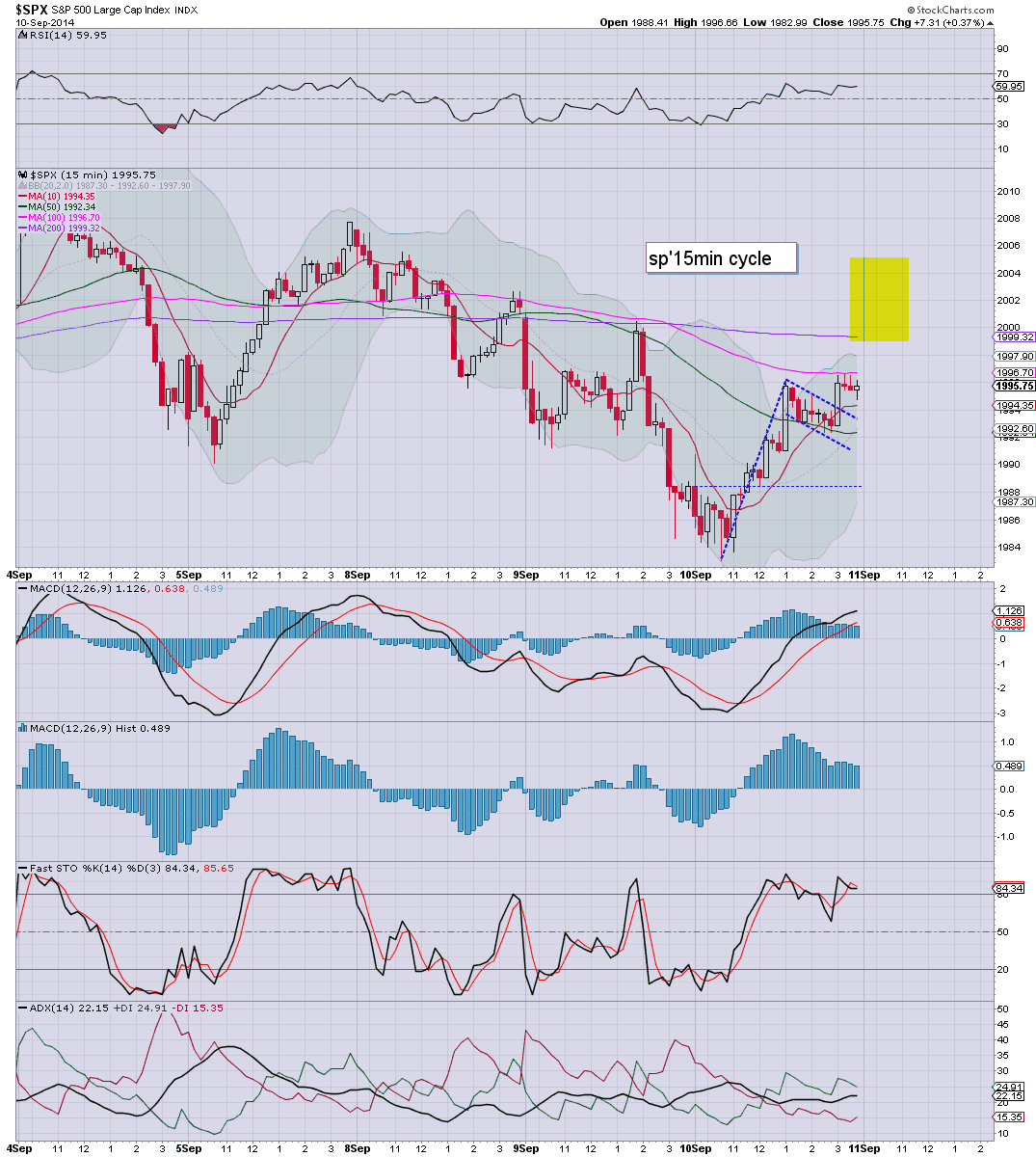 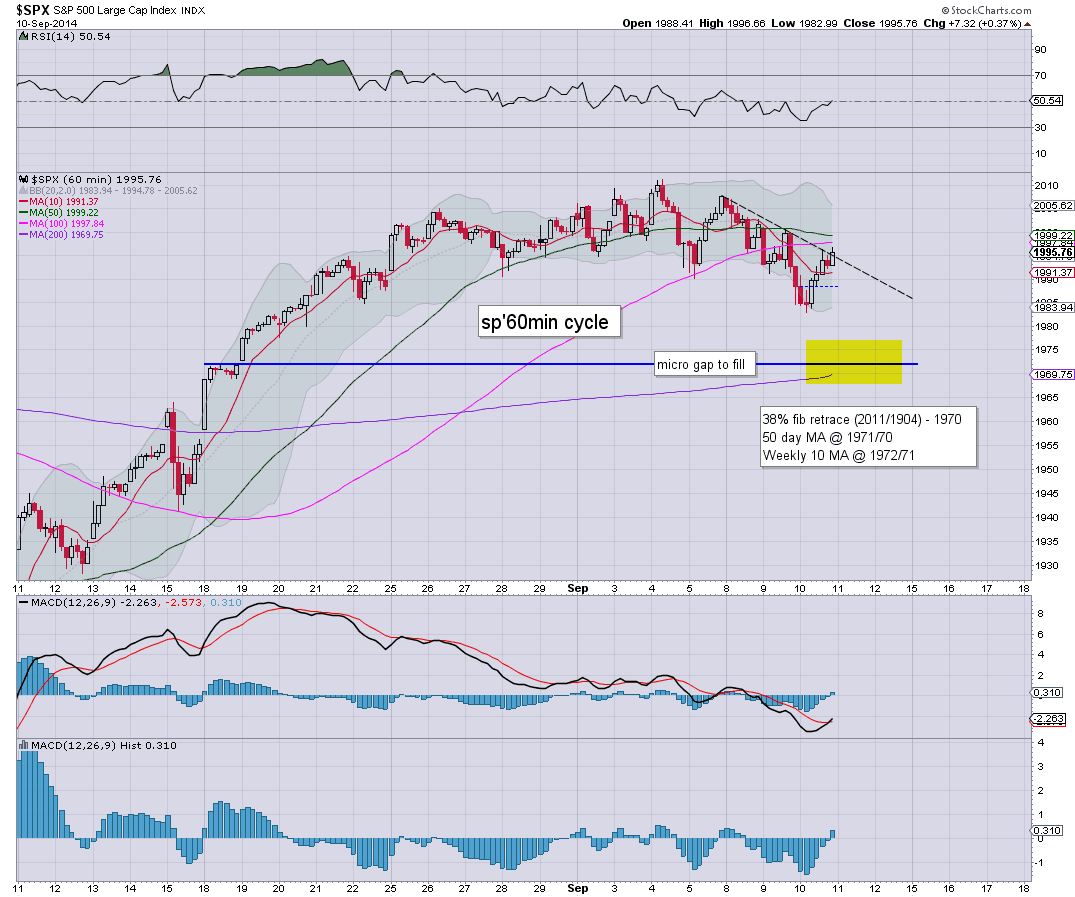 *price structure on the 15min cycle shows the baby bull flag, which break upward in the closing hour.
--

Overall, yet another choppy day, although yes.. we did break a slightly lower low of sp'1982.

All things considered, I'd still guess we eventually floor in the low sp'1970s, where there are many aspects of support.
--

meanwhile... over at Mt Doom (Iceland)

Continued sig' quakes in the 5s at Bardarbunga, and the caldera continues to sink.. a major explosion seems very likely. As ever, that event could be hours... or months away. Volcanoes are even harder to predict that the equity indexes!

--
more later.. on the VIX
Posted by Trading Sunset at 21:01:00
Email ThisBlogThis!Share to TwitterShare to FacebookShare to Pinterest

Equities continue to see minor chop. Price structure on the micro 5/15min cycles is a baby bull flag.. with target upside to around 2000. Equity bears should be content with any daily close <1993. Metals remain weak, Gold -$8 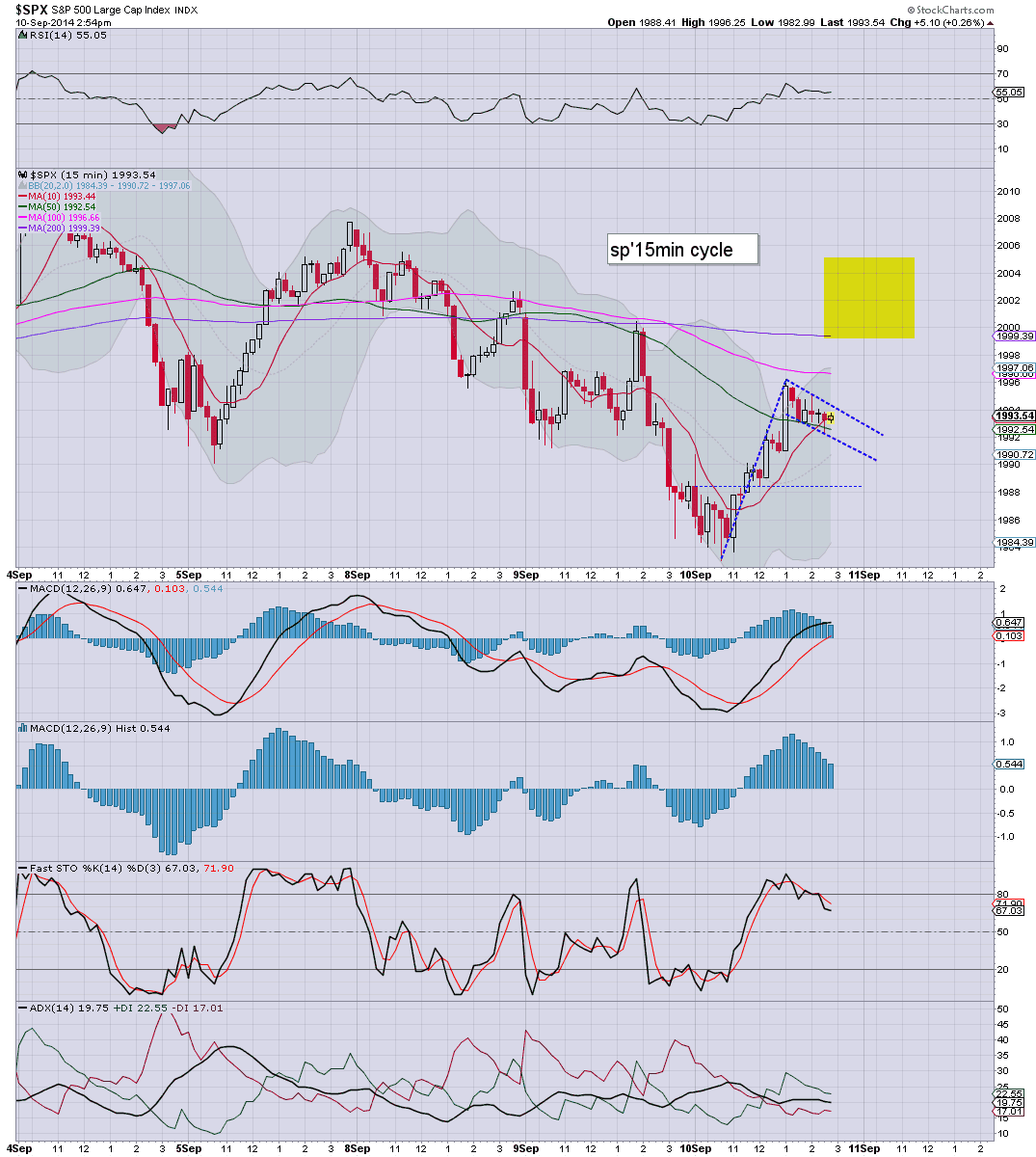 *seen on the smaller 15min cycle, its a clear bull flag.

On any basis, today is merely just another day of minor chop

Problem for the bears tomorrow.. QE of $2bn in the morning, that sure won't help.


3.07pm.. baby bull flag is being confirmed.. with a move to 1995. A daily close in the 2000s would understandably dismay many bears.. and would make for a bullish engulfing candle on the daily cycle...

Regardless, nothing for anyone to get excited about today.
Posted by Trading Sunset at 19:55:00
Email ThisBlogThis!Share to TwitterShare to FacebookShare to Pinterest

There is a fair chance we've maxed out at sp'1996.. at what is arguably short term downtrend resistance. All things considered, market still looks set for another wave lower, to the low 1970s, whether tomorrow..or Friday. 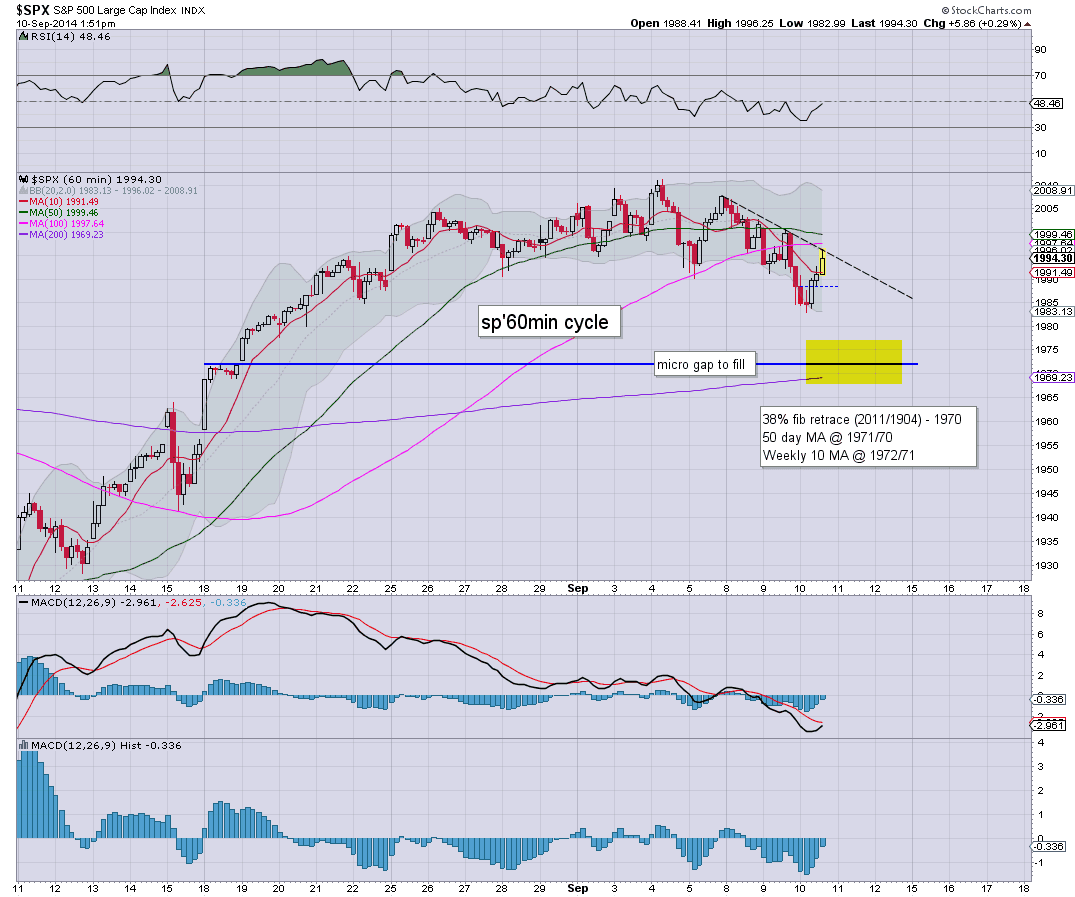 ...back from the park.... on what is depressingly another day closer to winter.

--
As for the market... bears need to be mindful of $2bn of QE tomorrow morning, although right now, the sp'2000 threshold looks unlikely to be hit until next week... after the 1970s have been first hit.

Hourly MACD (blue bar histogram) cycle is set to go positive into the close/early tomorrow.. so.. its a bit of a conflicted situation.
-

Notable strength, TWTR & GRMN, both higher by a strong 4%
-

Notable strength in AAPL, +2% @ $100
Posted by Trading Sunset at 18:53:00
Email ThisBlogThis!Share to TwitterShare to FacebookShare to Pinterest

The minor bounce continues, and those equity bears seeking the low sp'1970s, should be seeking for things to level out no higher than 1995 this afternoon. Metals continue to slide, Gold -$12, which is causing further problems for the miners, GDX -2.1%. 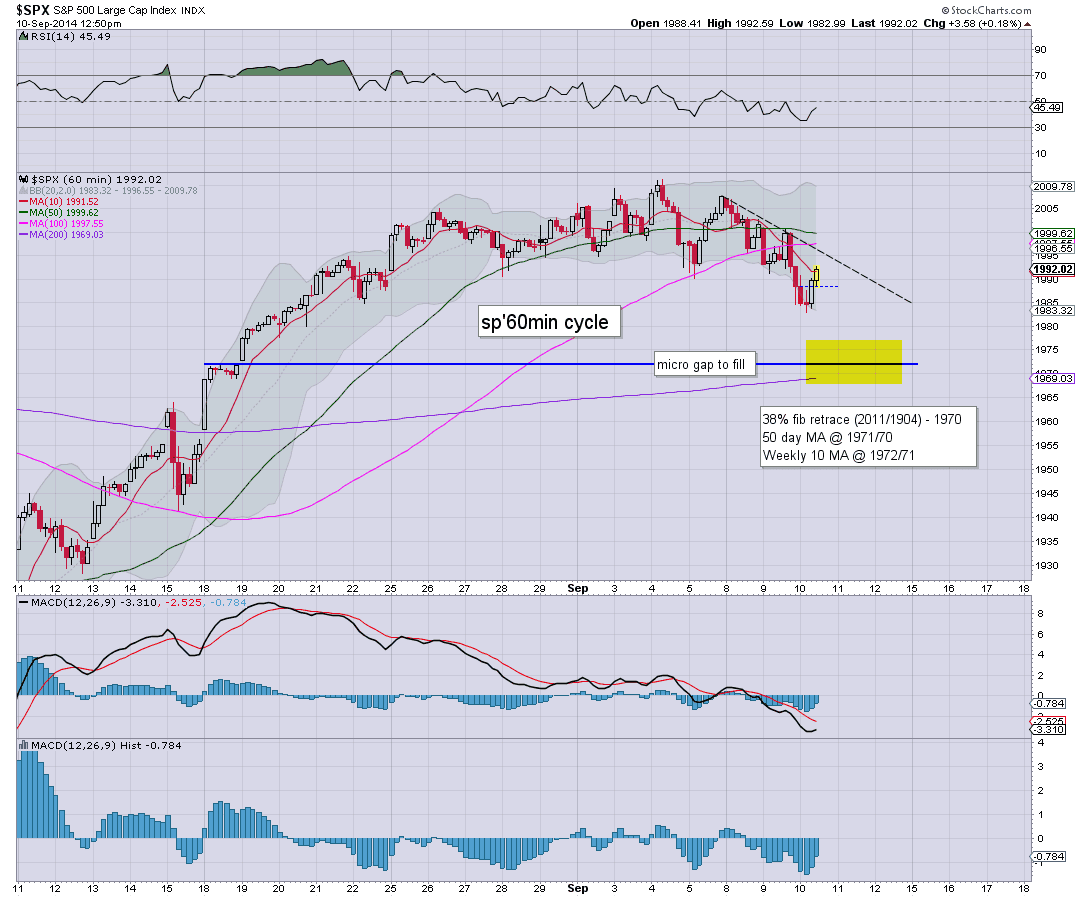 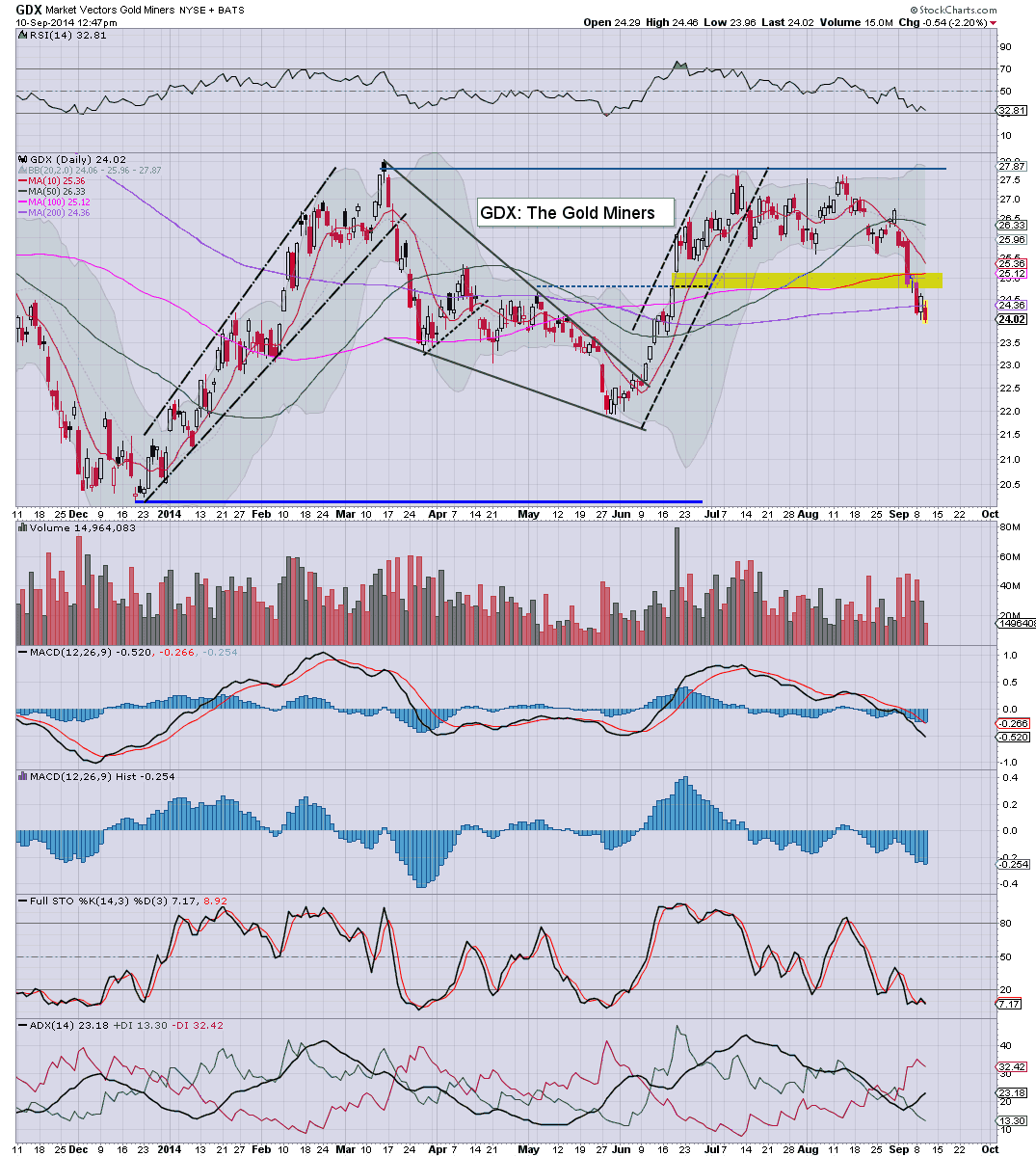 I can only hope YOUR day is better.
--

--
time for a walk... before the vampires come out....
Posted by Trading Sunset at 17:50:00
Email ThisBlogThis!Share to TwitterShare to FacebookShare to Pinterest

Equities see a minor bounce from sp'1982 to 1990. Considering recent price action, there looks to be high probability of another minor wave lower to 1972/00.. where the key 50 day MA is lurking - along with other aspects of support. 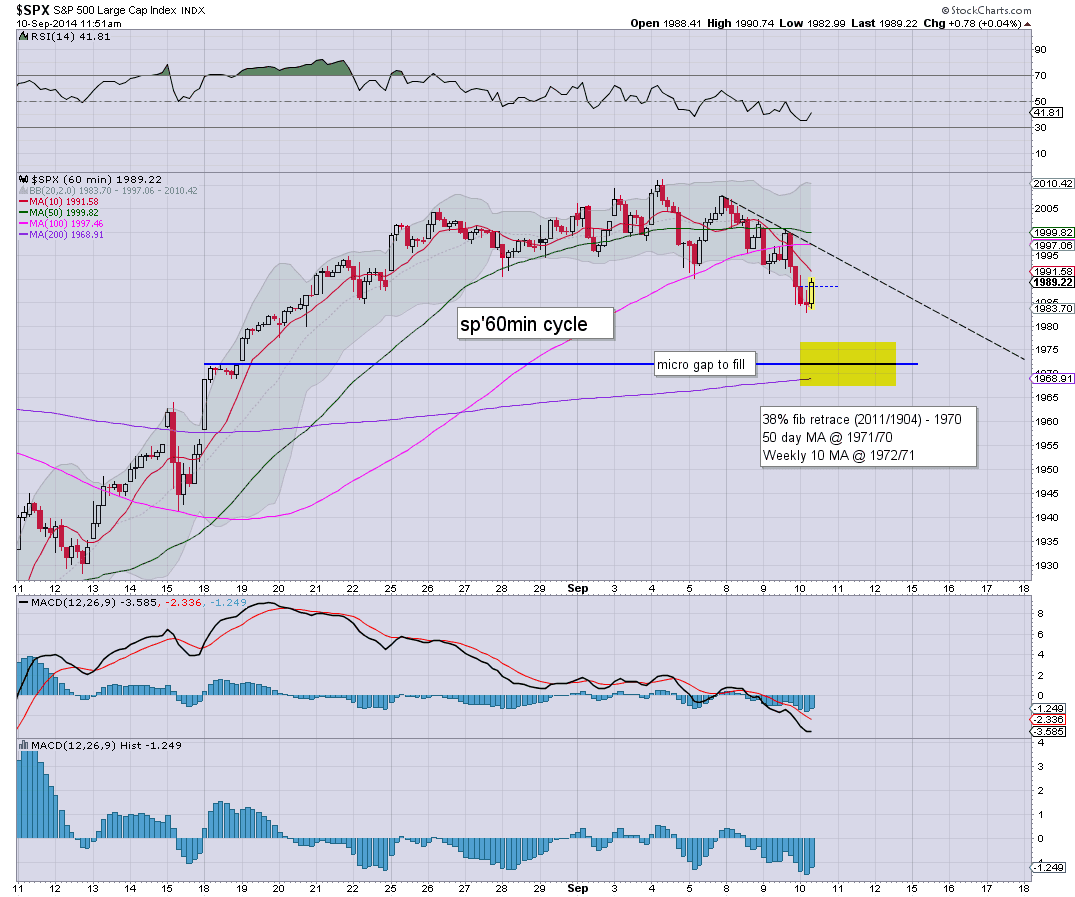 
Posted by Trading Sunset at 16:52:00
Email ThisBlogThis!Share to TwitterShare to FacebookShare to Pinterest

It is pretty subdued in market land, with continued minor weakness in the broader market. The low sp'1970s - along with VIX 15s, increasingly look an easy target. The only issue is... will it hold? Overall price action though is not particularly bearish. 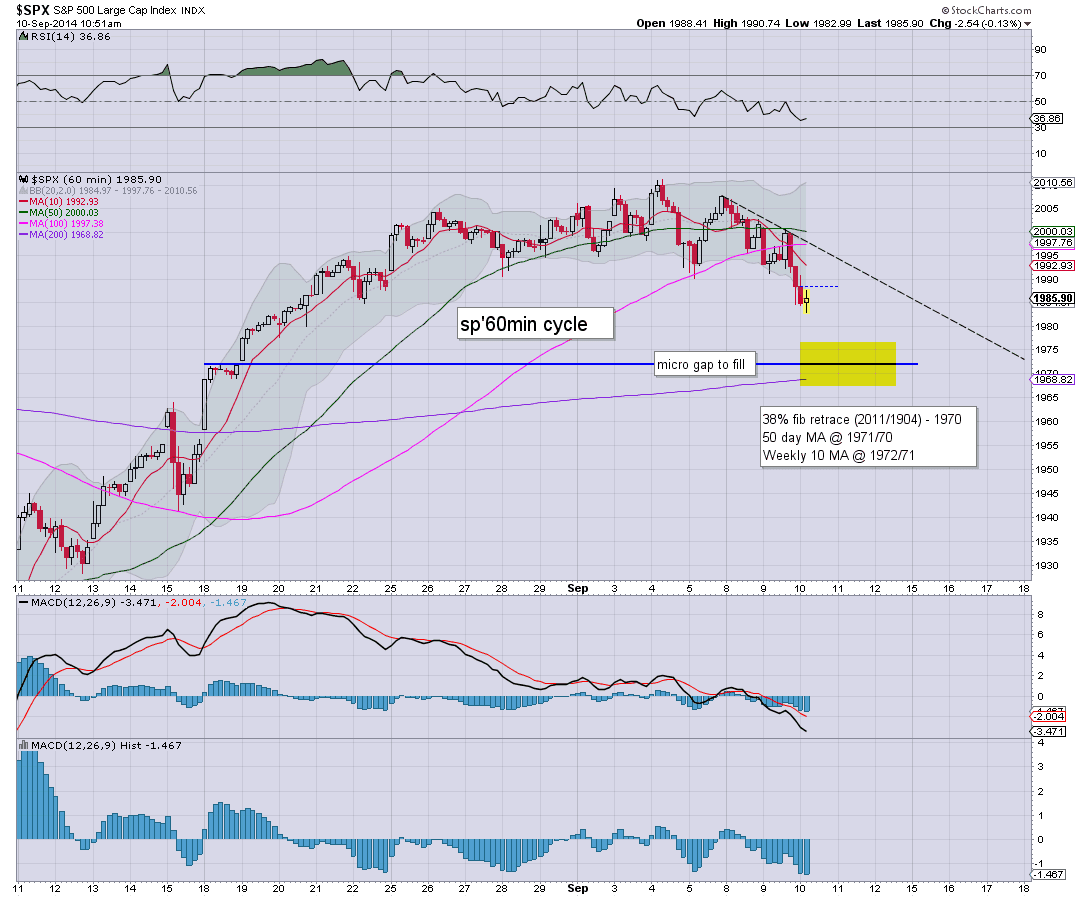 There are many aspects of support in the low 1970s, along with a clear price gap in the VIX in the 15s.

Unless bears get some 'news excuse'... this market is going to once again floor on the Thur/Friday the week before opex.

Posted by Trading Sunset at 15:51:00
Email ThisBlogThis!Share to TwitterShare to FacebookShare to Pinterest

10am update - continuing to slide 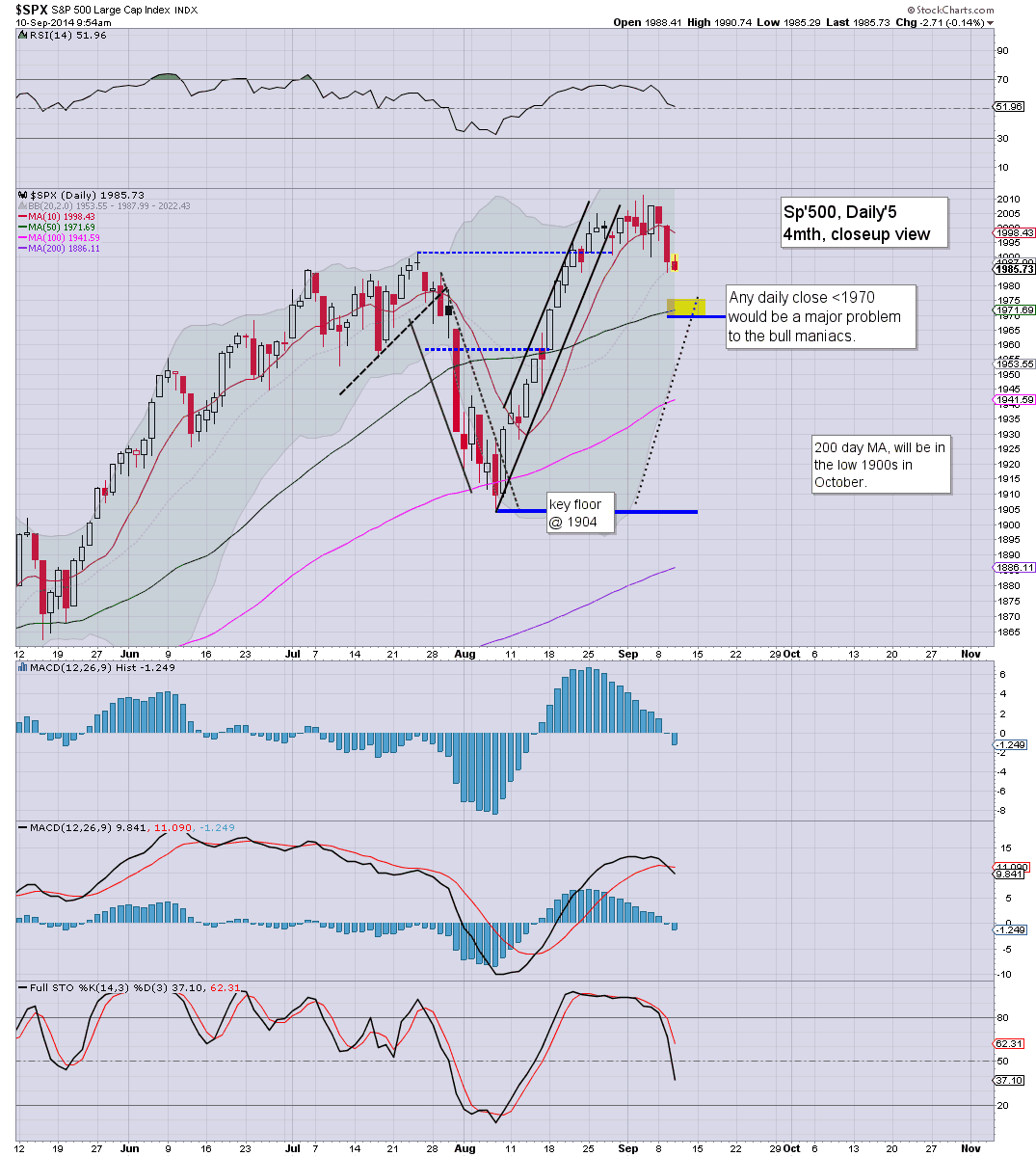 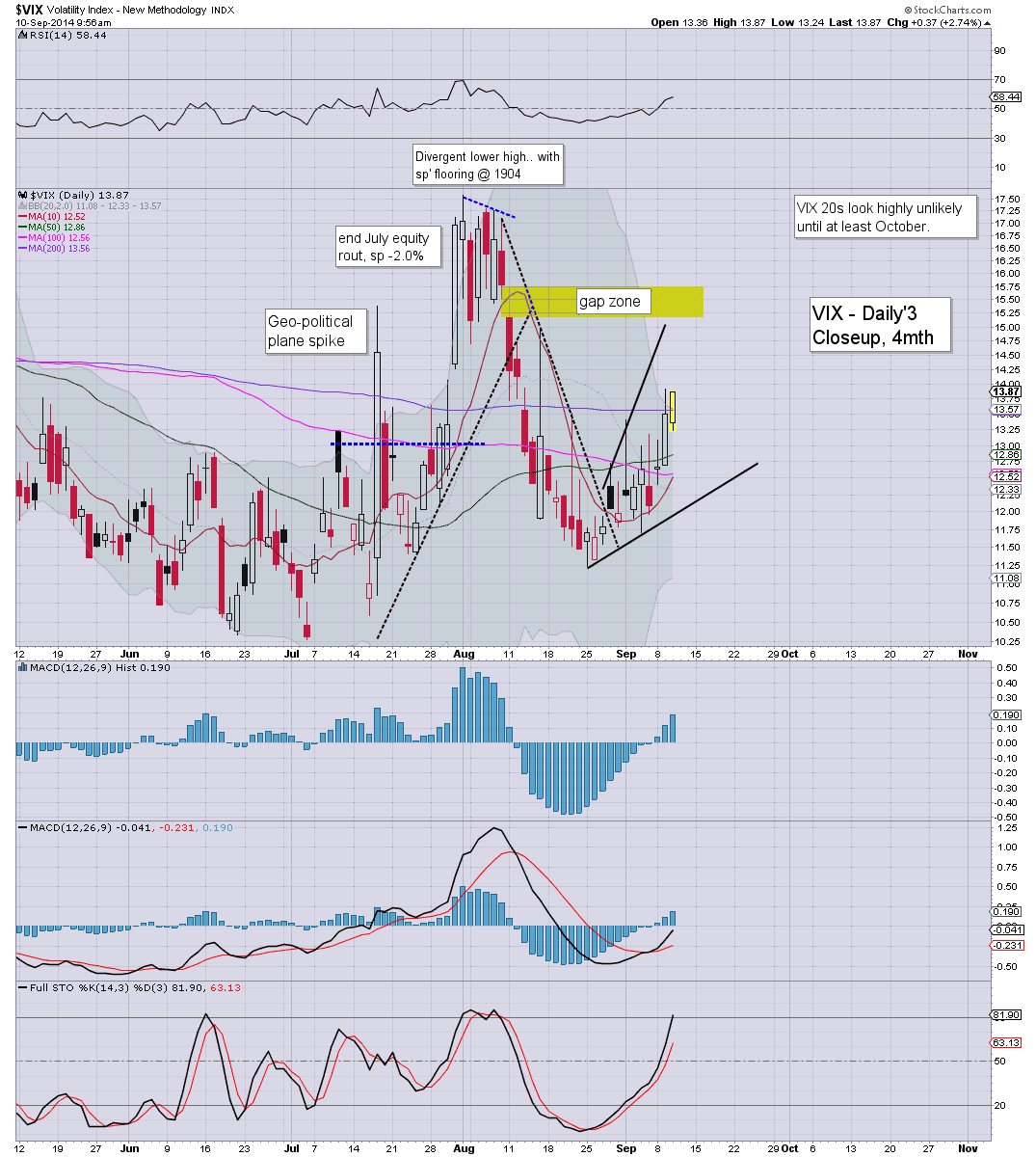 A relatively quiet open, but the weakness is certainly still there.

So... is this just a little tease to the bears... or will it keep on falling?

Barring some 'spooky news'.. its just a tease..before new highs later in the month.

Good morning. Futures are a touch higher, sp +2pts, we're set to open at 1990. Commodities are weak, Gold -$5, whilst Oil/Gas are both lower by around -0.3%. Equity bulls should be desperate to hold the sp'1970s across the remainder of this week. 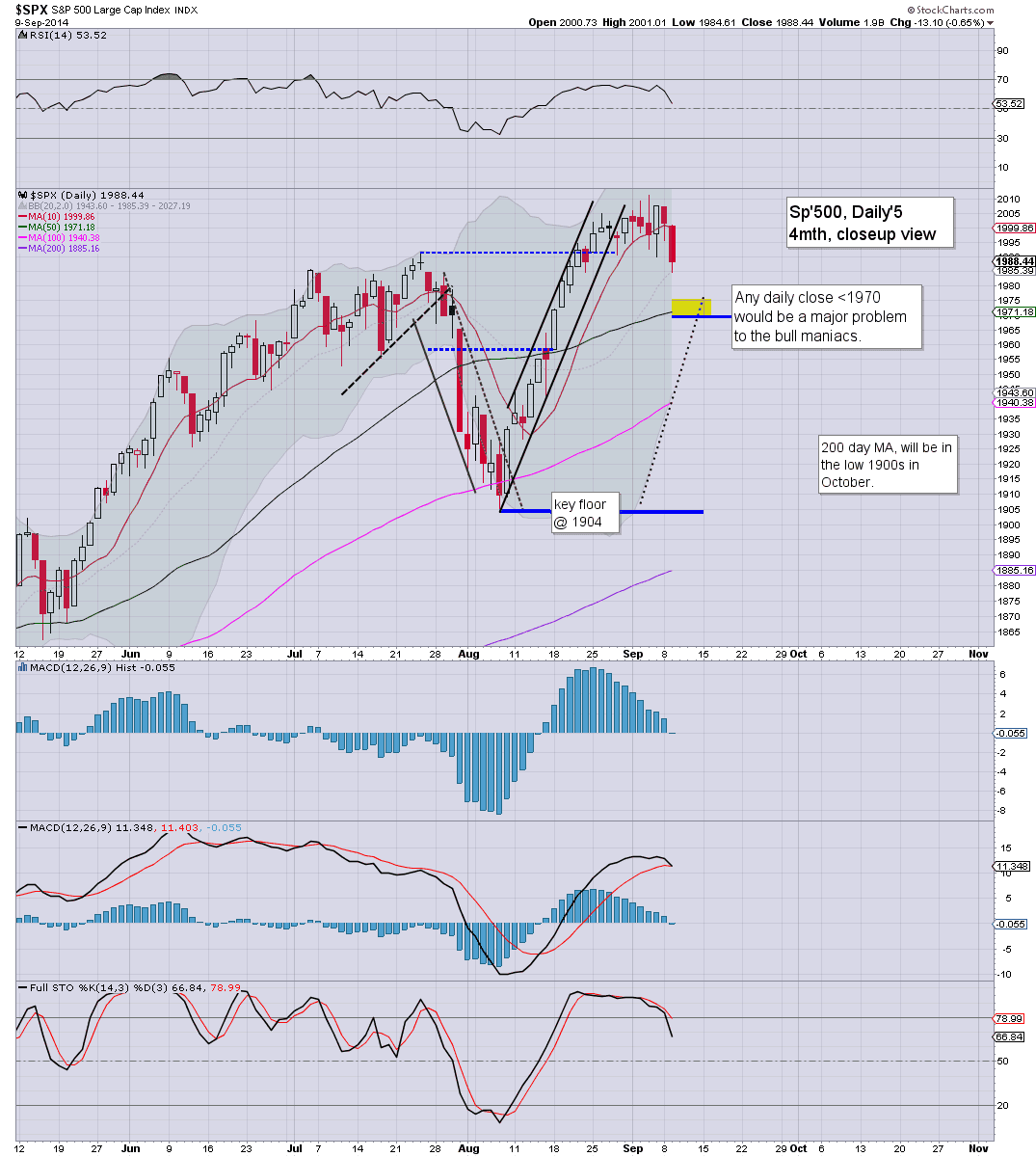 So... with the break of sp'1990, the bearish chatter has soared. I'm seeing a fair bit of chatter about a full retrace to the August low of 1904. That of course would have huge implications for Oct/Nov.

As things are, price action remains much the same, and I just can't see a break <1970.

It will be VERY important for the market to put in a spike-floor at the 50 day MA of 1971.. otherwise this could indeed fully unravel.

--
Update from an overly loud Oscar

--
Have a good Wednesday
Posted by Trading Sunset at 13:16:00
Email ThisBlogThis!Share to TwitterShare to FacebookShare to Pinterest

US indexes closed moderately weak, sp -13pts at 1988. With the break of 1990, there is now viable downside to the low 1970s, along with VIX in the 15s. Regardless of the ongoing weakness, the broader trend remains bullish, with target upside to 2030/50. 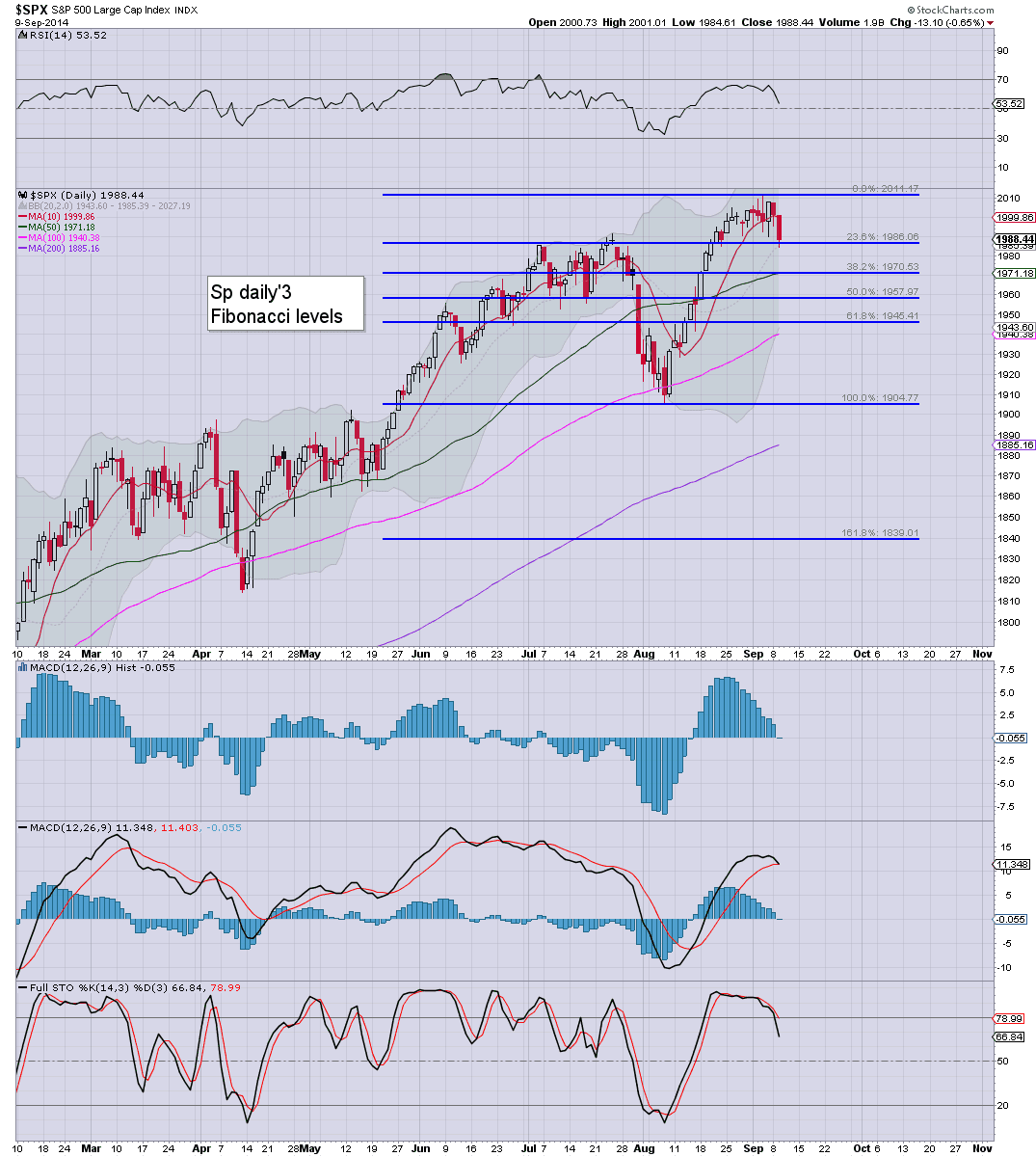 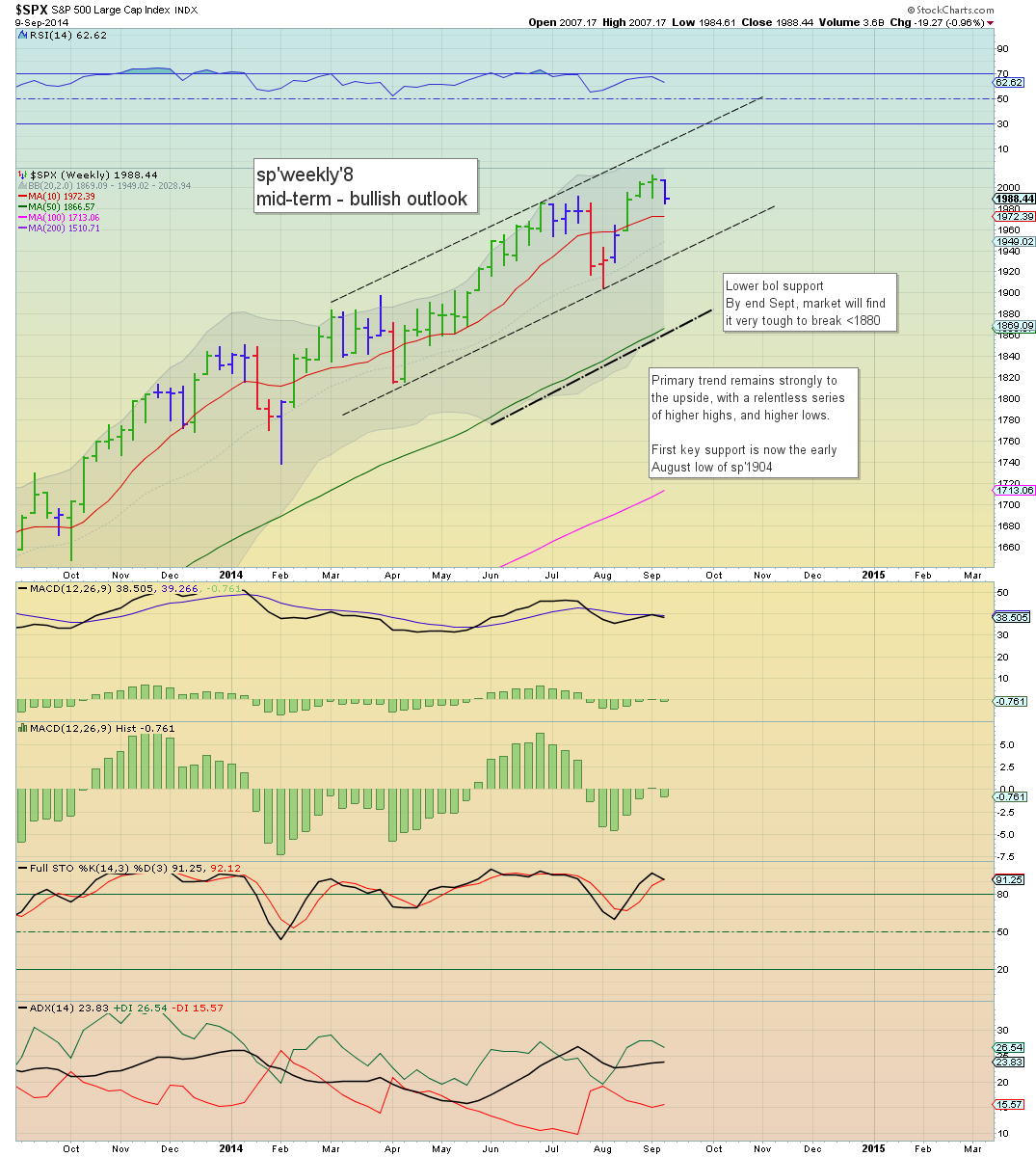 A pretty tiresome day, and frankly I'm getting real frustrated with most of it.

With the failure to hold sp'1990, the market looks vulnerable to further downside.. across Wed/early Thursday. Primary short term downside looks to be the low 1970s, where there is a minor gap, along with 38% fib retrace of 2011/1904. So yes.. I'm now expecting continued weakness.. before we push to new highs within another week or two. 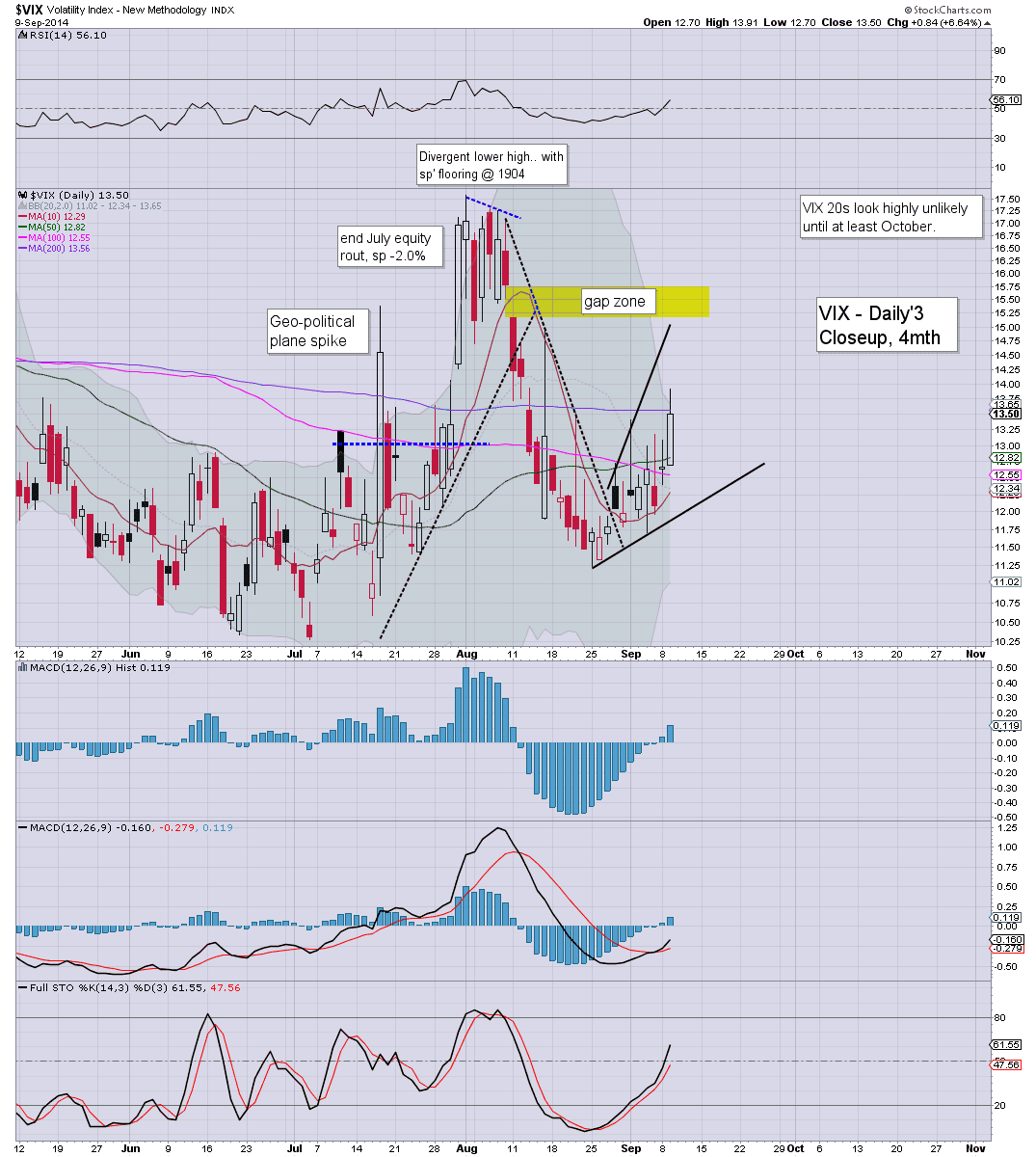 --
It is notable that the weekly 'rainbow' candle is blue, with first key support at the 10MA of 1972. I would be VERY surprised if we break into the 1960s. Price action sure doesn't support it.

It does look once again that we'll see an equity cycle low at the Thurs/Friday in the week before opex.
-

There isn't much tomorrow, just wholesale trade data, and the EIA oil report.

I hold a small SPY block (long) overnight.. if we fall into the 1970s... I'll likely pick up a secondary much larger SPY block... and look to drop into next Friday's opex