The VIX opened flat, maxed out with a gain of 2%..and closed effectively flat. With the dow and SP' closing down around 1.0 and 0.75% respectively, todays flat VIX is certainly unsettling from the bearish perspective. 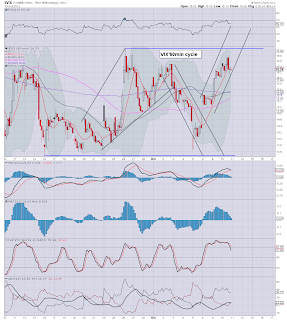 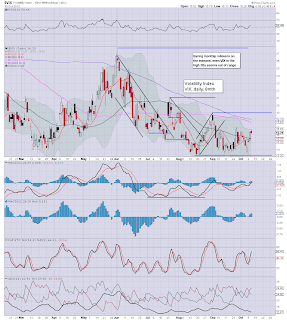 I just don't know what to think about todays VIX action. Hell, if you look at the daily chart, thats a fractionally red candle - at the top of the upper bollinger band no less.

I suppose the bears can at least see that the VIX hourly cycle - MACD (blue bar histogram) has now reset at least 50%. It could certainly jump higher again tomorrow, but...it sure isn't looking so great.
--

Bears need a significant opening Thursday gap lower...right below 1425..preferably <1420. If that is possible, then perhaps the VIX can spike to 18/19.

I certainly don't see any near term moves <1400. There is still a near total lack of fear in this market, and the index declines we've seen so far are only in the 0.75-1.0% range..thats really minor.

After the mixed open, the indexes declined across the day. The declines were not huge, but they certainly  have reinforced the down trend.

The VIX closed flat, and considering the index declines, I wonder whether its a warning that the indexes are close to flooring. I'm guessing its just that the cycle is out of sync, but that is a very uncertain guess. 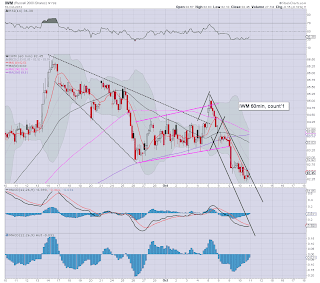 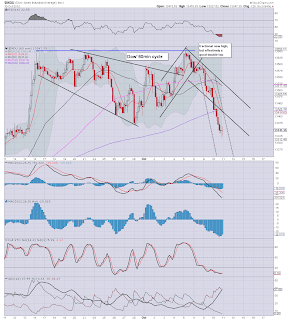 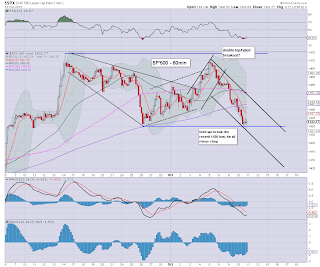 The exciting thing is if we can gap lower overnight, then there is a chance we'll open much lower at the Thursday open in the 1420/15 range.

A very important point is that both the Dow, and Rus'2000 indexes already below their sp'1430 equivalent levels. The transports of course...way lower, as it has been for weeks.

More across the evening
Posted by Trading Sunset at 21:03:00
Email ThisBlogThis!Share to TwitterShare to FacebookShare to Pinterest

The main indexes remain weak, although the declines aren't that much, the Dow is -1%, with the Rus'2000 small cap only lower by 0.3%

The VIX is actually red, and this is now my primary concern. 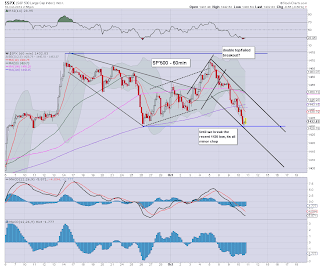 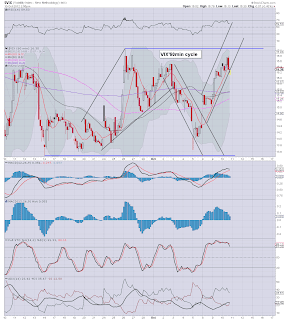 As noted, the VIX remains a real concern, I'm not sure what to make of it.

As it is, I'm holding short into Thursday.

More after the close
Posted by Trading Sunset at 19:58:00
Email ThisBlogThis!Share to TwitterShare to FacebookShare to Pinterest

A weak market, and we've just recently tested what is the important 1430 floor. Its natural for some kind of minor bounce, but I'd not expect it to hold.

One concern for the bears is the near mute VIX, which is flat. Maybe the cycle is just out of sync with the indexes, needs a little time to reset...or...the VIX is warning that the index floor is already likely in. I  hope its not the latter! 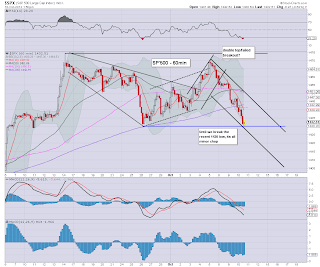 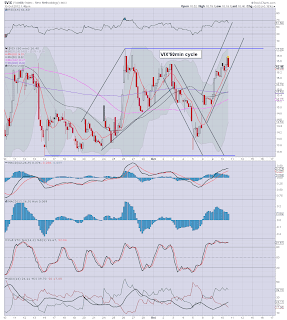 We are only day'3 on this down cycle for the SP', I think there is pretty good chance for at least one or two days lower. 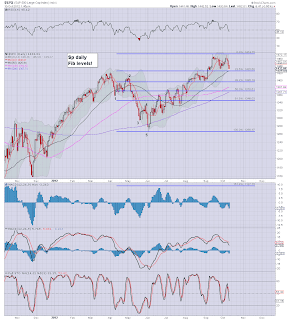 The Fib' chart would be suggestive that if 1425 fails to hold, then a test of the recent cycle low of 1397 will be hit..perhaps even lower.


Regardless, I wanna bail by Friday! With opex next week, another stupid bounce can't be too far away.

Main indexes are moderately lower, and all holding within their down channels.  Next target is a break of 1430, and that opens up a fast drop somewhere into the 1420/00 zone.

VIX remains flat, but there is plenty of upside, especially if the market gets a little upset later this afternoon. 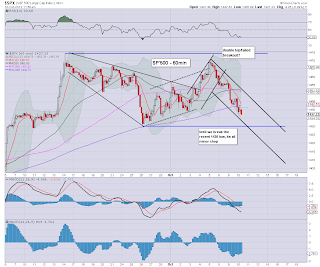 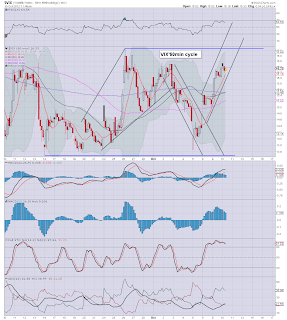 An interesting day so far.

I remain short, trying to be patient..its not easy, seeking to exit Thursday morning - preferably on a large opening gap lower.

Yet, the bigger picture is what I am interested in. This autumn could become rather exciting as we move into late October. I am waiting for some adventurous trading days ahead...

Good morning. Overnight futures showed moderate gains, and despite a minor recovery, we did finally open fractionally lower on most indexes.

VIX is showing no concern, and is only a touch higher. 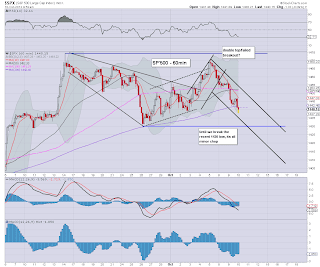 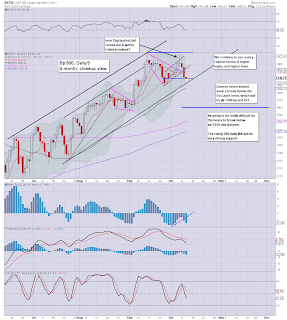 I remain short, looking to exit early Thursday, especially if we get a VIX spike in the 18/19 range. 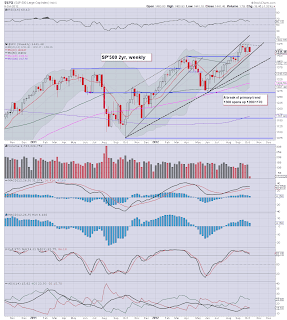 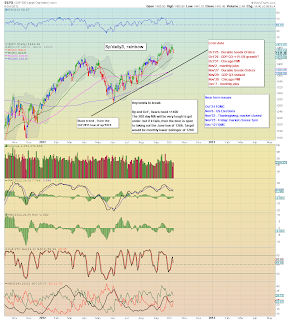 Not a bad day, and the closing hour was good for the bears. Now the issue is what about tomorrow?

Tomorrow's action will be interesting. Will the bull maniacs manage to reverse the trend, or will we start seeing the market selling into each micro-rally?

I'm guessing the latter, but then...what else would I say?

The main indexes lost around 1% today, it was the first 'moderate' decline in over 2 weeks. The closing action was pretty bearish, and even the VIX closed up around 8% 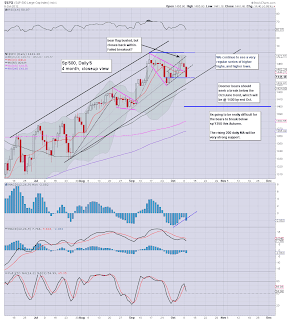 So, lets consider whats happened in the past few weeks

Market rallies to spike to sp'1474 on QE announcement
Minor pullback..and then a 7 day ramp, that just fails to break a new high - although the Dow'30 index did.

Friday's action was indeed a very interesting event, and with two red closes, it makes for a very nice spiky top for the previous up cycle.
--

Today was day'2 down of this new cycle, and we've clearly broken what was a bear flag. I think there is a good chance we can see another 2-3 days down.

First, we need to take out that 1430 low. A break of that, should in theory open up the 1420/00 zone. Where we floor will be very tricky to judge. Arguably, bears should look to the VIX for some guidance, and try to exit on an opening gap higher - especially if VIX is 19+

I remain short, and absolutely am seeking to exit ALL short positions no later than the Friday close. Next week is opex, and I'd guess we'll again trundle somewhat higher again. What matters then for the bears, is putting in a lower high - preferably something in the 1445/55 zone.

If that lower high happens, then..'interesting things' are viable.