It was the third consecutive weekly gain for the US indexes, and that makes nine weekly gains out of a possible ten so far this year. The 'old leader' - transports, is still leading, and climbed 2.1% this week, whilst the other indexes generally managed around 0.5-0.75%. Primary trend remains upward, but its getting arguably over-stretched.

Lets take a broad overview of the six main US indexes. 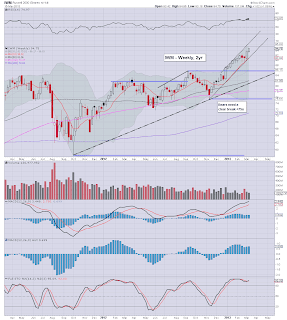 The R2K usually plays second leader in this market, and it still is, rising 1.1% this week. Upper bollinger on weekly charts will be offering 97s next week. Underlying MACD (blue bar histogram) cycle is ticking back upward, but I'm guessing this latest up wave will put in a slightly lower secondary tower..and thus offer a preliminary bearish divergence sign for April/May.

Under no circumstances do I expect the big 100 for IWM in this up wave. 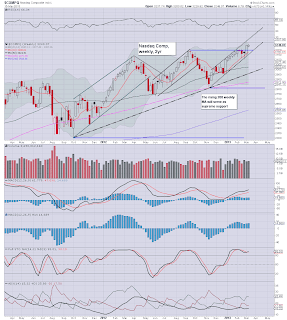 The tech sector continues to struggle - relative to the main indexes, gaining just 0.14% this week. Its looking 'tired', yet until we break below the rising channel - currently around 3175, bears can't take any daily declines seriously.

First primary downside target for the bears in April should be the big 3000 level. 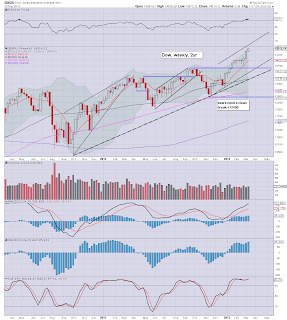 The mighty Dow broke the Oct'2007 high, and continues to climb. There is absolutely no sign of a turn yet. However, with a weekly RSI of 74, this index is getting way into the overbought zone.

Bears need to break down to 13600 - a significant 900pts lower, just to challenge the rising channel! 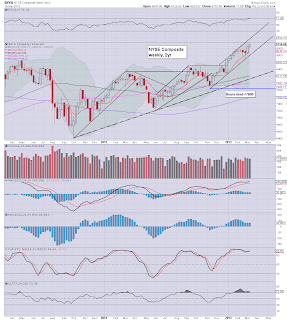 The master index clawed another 0.6% higher, and shows no sign of a turn. Being one of the more broader market measures, the NYSE Comp' is looking overly high, but price action is what matters..and so far....we're still going up.

Bears first downside target should be 8900, which is a good 3% lower. 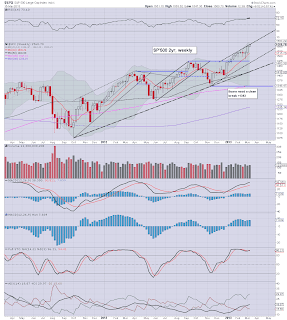 The important sp' is now so very close to breaking the Oct'2007 (intra-day) high of 1576. Considering the Trans, R2K, and now the Dow have broken their highs, it would be surprising if the Sp' didn't.

The MACD cycle is ticking back upward again, and on any outlook, it'll take at least 4-5 weeks to go negative cycle again. Bears have a great deal of work ahead of them this Spring.

First initial soft resistance is the rising weekly 10 MA, which will be in the 1520s across the next week or two. 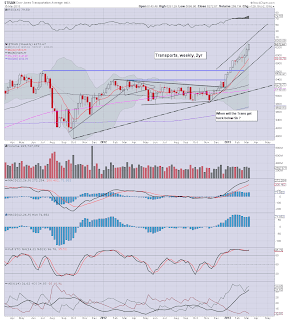 The old leader is indeed still leading, and its now in the upper 6200s. Upper bollinger line will be offering the 6400s next week, so there is a reasonable 2-3% upside..before this wave likely completes.

First key downside for the bears this spring would be the old resistance/highs of 5600, but that's a very significant 10% lower.

So, yet another week higher for the main indexes. Clearly, the primary upward trend continues, and there is absolutely no sign of a turn/levelling phase.

However, the various indicators - especially RSI, are generally on the 'toppy' side. I'm guessing the wave which began last November will be concluding within the next week or so. I suppose sp'1600s are 'briefly' viable, but...the hourly chart (see further below) would suggest otherwise.


The bigger outlook, doom or boom?

I read around a great deal - like I'm sure many of you do, and there is very much a strongly disparate opinion out there now.  We have the doomer bears of course, touting the 'giant bearish wedge', and a possible 'triple top'. Then we have the deluded bull maniacs, some of whom are now touting sp'1700/1800s by year end.

Which will it be? I sure don't know. In fact, I'm actually genuinely trying to keep an open mind. I realise that sounds like I'm sitting on the fence, but really, I don't know where we are headed across the next few years.

What I do know though, is that there WILL be some key signals to be watching for in the weeks and months ahead. 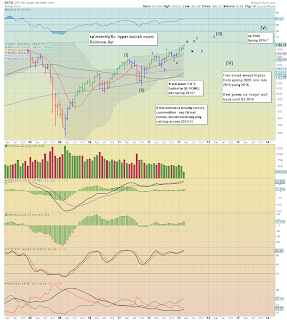 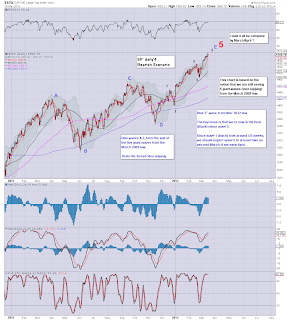 First, the 'hyper bullish scenario, it remains the one where I am assuming the Fed just keeps on throwing money at the US markets, at least into spring 2014. It assumes that QE-POMO really does have a serious upward push on stock prices. This disturbingly 'crazy talk' scenario assumes the US markets battle higher for another 2-3 years.

The second 'daily4' outlook remains an older outlook, and the count itself is essentially a mere few days from being complete. We'll know very soon whether this count is invalid or not. If after the next wave lower we then rally to a new high, this scenario will have to get trashed.

Next week will be all about housing and the Fed. An FOMC meeting begins on Tuesday, with the announcement on Wednesday at 2pm (not the usual 12.30pm). I am unsure if the Bernanke will also do a press conference.


What about the market?

With reference to the hourly chart (see below), I think Blue III is complete, and we will see a brief drop on Mon/Tuesday, before a FINAL Blue V on FOMC day. Blue V in theory should last no more than 2-3 days, and be complete by the end of next week. 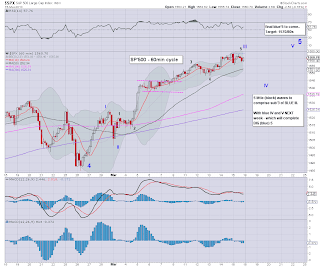 I will be looking to do an index re-short perhaps next Thursday/Friday, although being an options trader, I might simply wait until the following Monday (March'25).
--

As ever, all comments are welcome. Please support the site, I always welcome new sites/blogs to add to my links lists. If you know of a good one that I've not already linked to, let me know!

Next week will likely be very important, lets hope we see a key cyclical top put in. A multi-week down cycle - at least to the sp'1470s would be my primary target.

Back on Monday :)
Posted by Trading Sunset at 20:10:00
Email ThisBlogThis!Share to TwitterShare to FacebookShare to Pinterest
Newer Posts Older Posts Home
Subscribe to: Posts (Atom)